Possession dominance does not equate to opportunities. AC Milan controlled but was uncreative, AS Roma were opened but not punished and leave your victim for too long, he may just have the last laugh.

How the summit can tease those ascending the mountain, but those in red and black made important ground on the return of the climb. After early goals defeated Salernitana, Napoli’s slip-up at the San Siro to Inter had put Milan within a five-point distance again.

Stefan Pioli entered the new year with injuries still affecting his personnel: Mike Maignan and Ante Rebić to name but a few. Davide Calabria’s appearance in the week, his first since the start of October, has certainly helped the selection at right-back.

Roma had also been handed injuries to their attacking personnel but beat Bologna with most of their team available. José Mourinho’s team has entered an interesting space, impressive in the Expected Goals but unable to reflect this against the bigger teams. Perhaps the away trip to Milan is no greater test in Italian football.

Milan started with the same team that defeated Salernitana in midweek, in Pioli’s usual 4-2-3-1 system. Two changes were made for Roma, as Nicola Zalewski and Tammy Abraham joined the 3-4-2-1 formation. Mourinho was unavailable to instruct on the sidelines, so Salvatore Foti took his place.

How Roma was going to combat the deep rotations of Milan was one of the biggest questions going into this game. In the process was an important tweak to how his midfield was going to operate. Off the ball, Nicolò Zaniolo dropped out of the first line and Lorenzo Pellegrini sat wider with Bryan Cristante central. Roma’s shape reflected more of a 5-1-4/5-2-2-1 formation, that aimed to shuttle Milan wide, with no pressure from Paulo Dybala nor Tammy Abraham, before squeezing the space if Milan attempted to progress. 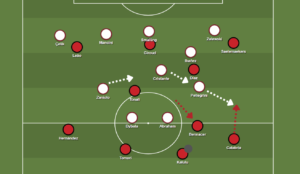 The storyline of the first half followed this pattern, and Roma would ideally want to break this up with excellent offensive personnel on the transition. Mourinho’s team encountered two problems: they could not win the ball high enough and they had no player to bridge the gaps between defense and attack.

Milan’s buildup phases were geared towards the right side, automatisms triggered around Ismaël Bennacer, who constantly adjusted his position around the backline, as well as Brahim Díaz, who dropped towards the deeper right channel. Despite Roma’s midfield shuttling and Roger Ibañez stepping up, the left-sided center-back could not follow Díaz close towards the halfway line.

Calabria and Alexis Saelemaekers also contributed to these rotations and once a Roma player was beaten, one-versus-one, in the wider channel, then Milan could slide the ball back inside towards Díaz. If the ball was being worked from Fikayo Tomori, back towards the right, Calabria made a highly aggressive run as Pellegrini was not going to follow his runs, whilst Bennacer kept coverage on that right side.

However, having two of your front four working so deep can come at a price. Despite working well in tight spaces, neither Saelemaekers nor Díaz was engaged with Giroud and distances were larger between the left of the attack. The advanced movements from Tonali were not connective, whilst Theo Hernández rarely overlapped for Rafael Leão to truly benefit. 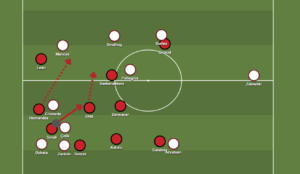 27th minute: Space opened for Milan to transition off failed Roma counterpress. Phase left Roma unbalanced and Díaz built the counter with Hernández on the run. Díaz would have an attempt saved and Milan scored off the resulting corner.

Nonetheless, Milan could take advantage of Roma’s midfield space in a different scenario. In the transition, Roma could be left very unbalanced. Their out ball came towards the right side, trying to launch Zaniolo or Dybala early, which lead to one or two moments of Roma counterpressure. Milan could then attack with space around Pelegrini, a phase which lead to Milan’s first goal. Díaz’s distanced attempt was saved over the bar, only for Pierre Kalulu to head the ball in from the resulting corner.

Milan finished the first period with 70% of the ball at their feet and such phases of control would still be seen in the second, but not in the same way. Roma tweaked again, this time, Nicola Zalewski was doing the pressing on the left side so Pellegrini and Cristante remained as a double pivot. This shape was clearer, a 4-2-4 formation whose striker duo did not attempt to press and wide players would only move up if the fullback was in possession and on the same line. 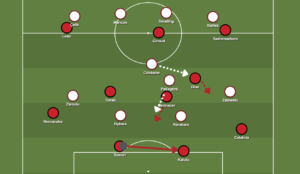 Example of Roma pressing at the start of the second half. Roma changed its pressing on their left, with Zalewski now forward, whilst the midfield where tasked with tracking runs more tightly. The result left a lot of space for Milan to exploit in this period.

The strikers’ lack of engagement created a problem for Roma because it forced their double pivot to be more engaged with Bennacer and Tonali, rather than Díaz behind them. Milan’s narrow wingers could force Roma’s defensive line deeper and Díaz was given so much space to receive between the lines. Not only this, but Hernández started to make runs to aid the attack and Leão pinning Zeki Çelik certainly benefitted.

Pioli’s team had created more space, especially on the opposition’s far side, but whether they could exploit it is another matter. This is a team that rarely switches the ball onto the other side and aggression can be lost if such space is not capitalized on. Milan preferred short verticals to construct their attacks, the problem was, once transitional momentum was lost the attacks fizzled out without them. 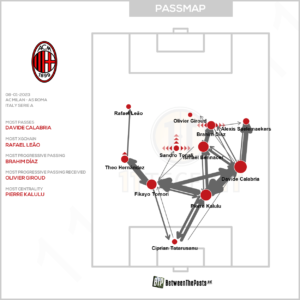 AC Milan’s pass map. Lopsided, with forwards very disconnected from each other.

More Roma possession spells started to creep in. They were lined up in their 3-4-3 formation in possession, but the same connection issues were there. Their wide forwards want to receive the ball like strikers and do not drop to give themselves access to the ball. The higher the wing-backs are, the more chance of touches on the ball, but Paulo Dybala was the only exception because he did start some phases positioned between the center-midfielders, not dropping whilst progression was being made.

Meanwhile, Milan was unproductive and wasteful in their buildup phase, whereas space on the left was still there to be taken. The one time they found synergy in the transition finally found a more dangerous attempt. A blocked attempt from Pellegrini was the platform for Hernández to carry the ball from deep. Leão held width and received on the left, whilst Giroud’s excellent curved run kept Chris Smalling central. What this created was space for the substitute, Tommaso Pobega, who had charged directly towards the box. His curled shot into the corner, fifteen minutes from time, was bound to be curtains in a game that Milan had controlled.

Romans call for its set-piece cavalry

Stephan El Shaarawy came on and swapped positions with Zalewski, an added attacker as the game state changed. Milan was inclined to drop deeper by this period of the match, however, other than fouling their target, its deeper block had no solutions for taking the ball of El Shaarawy or Dybala, who had started to hug the right touchline in the latter phases.

Roma did not need to pump the ball into the area from crosses, or at least from open play. That is because they could still freely work the ball wide and Milan looked more frantic in the space behind Leão. Produce the foul and Roma had an expert delivery in Pellegrini, with the tall players around that could cause opposition problems. A corner produced the first goal, Abraham had forced Tomori to engage with his former Chelsea teammates from a throw-in. Pellegrini’s outswinger was perfect for Ibañez to rise above the crowd and convert.

The visitors continued to move the ball around Milan, the match now at a much more chaotic rhythm. Although Dybala’s movement troubled, Aster Vranckx’s decision to bring him down so close to the sideline was certainly questionable. Another Pellegrini delivery was put in a similar position, a top reaction save from Ciprian Tătăruşanu denied Nemanja Matić, but Abraham was first to connect from close range, just his fourth goal of the season so far.

This was not your average bottle job. Milan sure controlled a vast majority of the game and threaded neat combinations to bypass, but they did not have the shot creation to match. Ground gained on the top spot has been lost and valuable points have been dropped ahead of a hectic schedule for Pioli’s team.

It is a great result for Roma, a team whose curiosity continues to grow. In the bigger games, their creativity vanishes, yet it has led to them getting results at San Siro (twice) and a draw at Juventus too. Whatever your stance, it is certainly a Mourinho team and in the mix for important European positions. 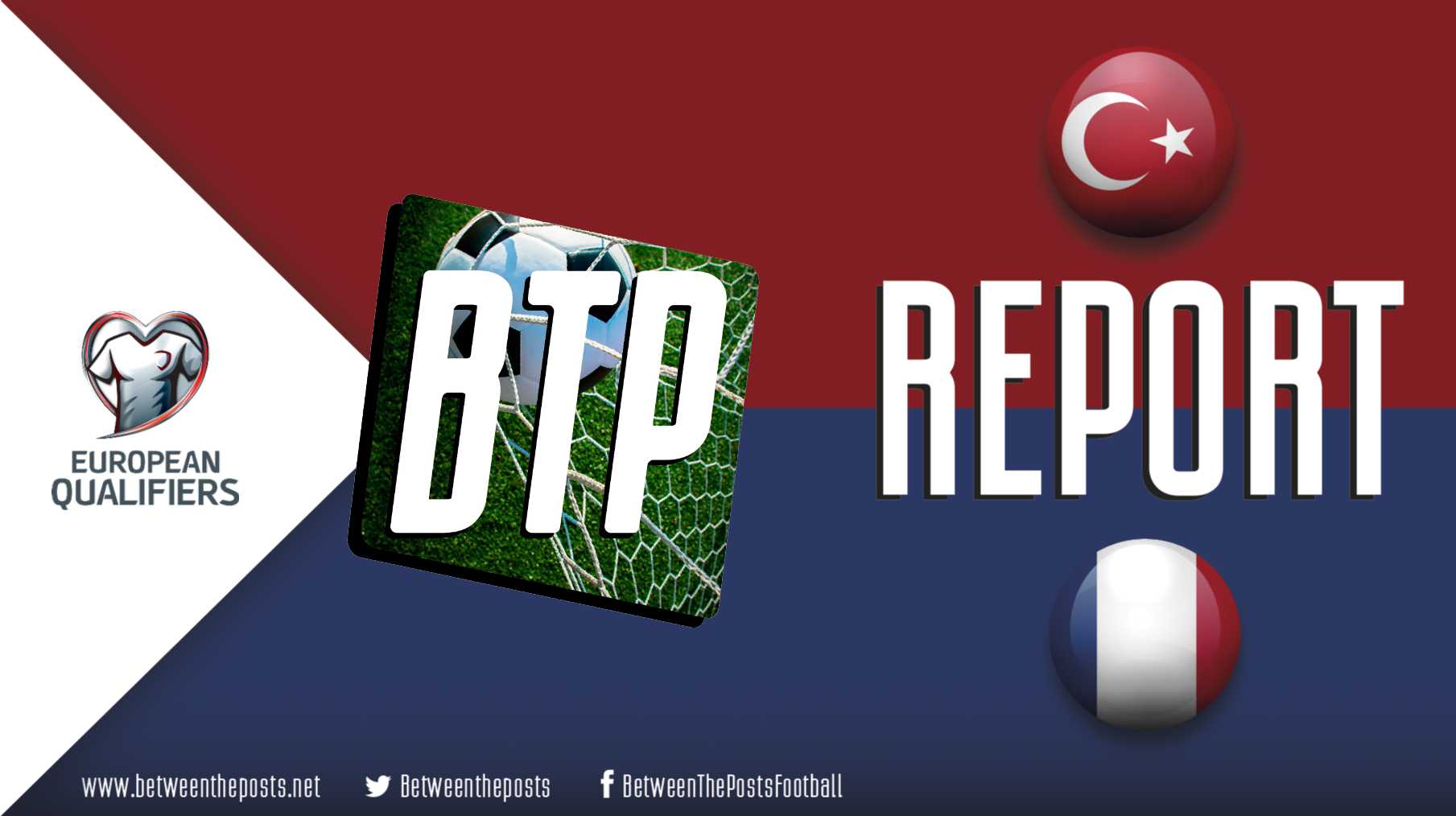