Australia showed plenty of character in this game as Argentina struggled to break them down defensively. However, Argentina were ruthless when it mattered as Lionel Messi put them ahead, before Julián Álvarez pounced on Mathew Ryan’s mistake to extend the lead. This was enough of a cushion for Argentina to see the game out despite Australia getting on the scoresheet late on.

A comfortable 2-0 win over Poland last time out was enough for Argentina to finish top of their group and set up a Round of Sixteen game against Australia. Lionel Scaloni made one change to his lineup from that match to face Australia, as Ángel Di María dropped out due to injury. Alejandro Gómez therefore stepped into the front three alongside Lionel Messi and Julián Álvarez. In midfield was the trio of Rodrigo De Paul, Enzo Fernández, and Alexis Mac Allister. Cristian Romero and Nicolás Otamendi continued to partner in central defense, flanked by Nahuel Molina and Marcos Acuña.

Australia responded to their opening defeat to France by securing 1-0 wins over both Tunisia and Denmark to reach the knockout rounds. They lined up with a 4-2-3-1 shape here, with a back four of Milos Degenek, Harry Souttar, Kye Rowles, and Aziz Behich. Keanu Baccus and Aaron Mooy were in central midfield, with a front four of Mathew Leckie, Jackson Irvine, Riley McGree, and Mitchell Duke ahead of them.

The first half saw Argentina with most of the possession, as Australia usually defended relatively deep in a 4-4-2 arrangement. Much of this part of the game was quiet in terms of goalmouth action, as Argentina made heavy work of trying to break down a determined Australia defense.

Initially, Argentina had started with Gómez playing from the left and Álvarez from the right. This meant that De Paul often played a bit deeper because of Álvarez coming into the right halfspace, while Molina provided width from right back.

- Narrow Australia lines, difficult for forward space.
- Conservative FBs, deep midfielders who wants ball to feet.
- No pinning on the backline, Álvarez an exception on some occasions. pic.twitter.com/YPbDZUQbej

This arrangement did not last that long though, as Gómez and Álvarez eventually swapped sides. This gave Argentina a more similar shape to that against Poland, where the left halfspace was occupied by Mac Allister and Álvarez.

De Paul still operated a bit deeper, as Gómez was more likely to come inside off the right and allow Molina to overlap, but Argentina did look a bit more balanced after the change of shape. Their attacking was still fairly poor overall though, as they struggled to get into the interior spaces of Australia’s 4-4-2 shape.

The absence of Di María also lost them some of the direct dribbling threat he provides from the right, which can be useful to destabilize a defense in these situations. Argentina’s possession play was fairly flat then, as Australia faced only one shot in the first thirty minutes. 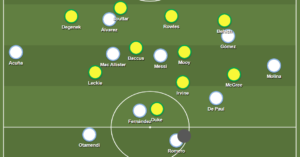 Argentina still struggled to break Australia down after the structural change.

Furthermore, Australia were actually able to have some possession phases of their own. Around midway through the first half, they put together some quite long spells of possession thanks to Argentina’s lacklustre pressing which lacked coordination.

Mooy was able to drop into the number six space and knit things together quite easily, while they also heavily used the goalkeeper as an extra man in the backline. Australia’s possession was not the most purposeful in terms of attacking threat, but it did give them a rest from chasing the ball as they had for most of the time until that point.

As the first half neared its end though, Argentina finally found the inspiration they needed. A combination started by Messi cutting in from the right side ended with him having the ball at his feet just inside the Australia box. Messi’s precise shot into the bottom corner evaded Mathew Ryan’s reach and put Argentina 1-0 up going into the break.

Lisandro Martínez replaced Gómez as Argentina switched to a 3-5-2 formation with Lisandro Martínez as the third center-back. This was clearly a move to increase Argentina’s defensive stability against an Australia side that wanted to be on the attack.

This move from Scaloni was a fairly sound one, as it turned out. In possession, the extra connection in the backline plus Fernández in front gave them a fairly stable base to work from. Against the ball, the extra center-back meant smaller gaps between defenders in a back five, helping them to deal with the direct play from Australia.

Argentina were able to double their lead just before the hour mark as Álvarez pounced on some careless play from Ryan with the ball at his feet to make it 2-0. Australia did carry on pushing despite the adverse circumstances at this point, pressing high and throwing long balls into the Argentina half.

Scaloni brought on fresh legs in the form of Lautaro Martínez and Nicolás Tagliafico, while Australia coach Graham Arnold reinforced his attack with the likes of Garang Kuol and Jamie Maclaren. Australia eventually got a large slice of luck as a freakish deflection saw substitute Craig Goodwin’s shot go in off of Fernández.

The reduction of their lead to just one goal resulted in a slightly nervous final ten minutes or so for Argentina. Last ditch interventions from Lisandro Martínez and Emiliano Martínez on separate occasions were needed to keep Argentina ahead as Australia looked to put the pressure on.

Argentina had their own chances at the other end in the final stages, as Messi weaved his way through a tiring Austalia defense to set up chances for Lautaro Martínez which were not taken. In the end though, Argentina were able to safely navigate their way to a 2-1 win, taking them through to the next round. 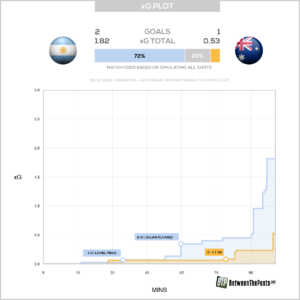 Argentina were not at their best here, showing some unclean play with and without the ball. In the end it was a game of individual moments for them – Messi’s genius for the first goal, followed by Álvarez being sharper than Ryan for the second. At the other end, heroics from Lisandro Martínez and Emiliano Martínez were needed to prevent Australia equalizing. Nevertheless, they now advance to face the Netherlands on Friday.

Australia gave pretty much all that could be asked of them given the difference in ability between the teams on paper. Their defensive display in the first half was solid enough, while their attacking play in the second half was uncomplicated but still managed to worry Argentina at certain points. Overall, they exceeded expectations in this World Cup where few gave them a chance of advancing from their group.