It is one of the most asked questions in the game of football. Why does one of the greatest players of all time perform at such a different level for club and country? If you want to answer that question, look no further than Argentina – Colombia in the 2019 Copa América.

There is a Copa América every year now, or so it feels. After back-to-back editions in 2015 and 2016, we’re getting treated to two more editions in a row, this summer and the next. More chances for Lionel Messi to finally win a piece of silverware with his country at senior level, the one thing eluding his gargantuan trophy cabinet.

Despite reaching four finals, Messi’s international career will never be seen as complete without actually winning something. He will be 34 years old when the World Cup in Qatar commences; the clock is ticking.

The first hurdle en route to international glory was Colombia, who have been under the guidance of Carlos Queiroz since February. Calling him ‘an experienced manager’ is an understatement: Queiroz has been coaching since 1984 and South America is the fifth continent were he has been employed.

He set his team up in a hybrid 4-3-3 formation, with James Rodríguez as the right winger and Cuadrado as right midfielder. Queiroz surprised by leaving Santiago Arias on the bench for the more defensive-minded Stefan Medina. Falcao is still captaining the side from the striker position.

In stark contrast to Queiroz, Argentina’s manager Lionel Scaloni can be considered a rookie. Scaloni is a former assistant to Jorge Sampaoli and is only appointed as caretaker manager. His 4-2-3-1 formation was made up of players from Europe’s super clubs, players from clubs like Real Betis, Fiorentina and Ajax, and lesser known players from the South American domestic competitions. A well-known combination in recent years at Argentina’s national team, often turning out very unsuccessful. 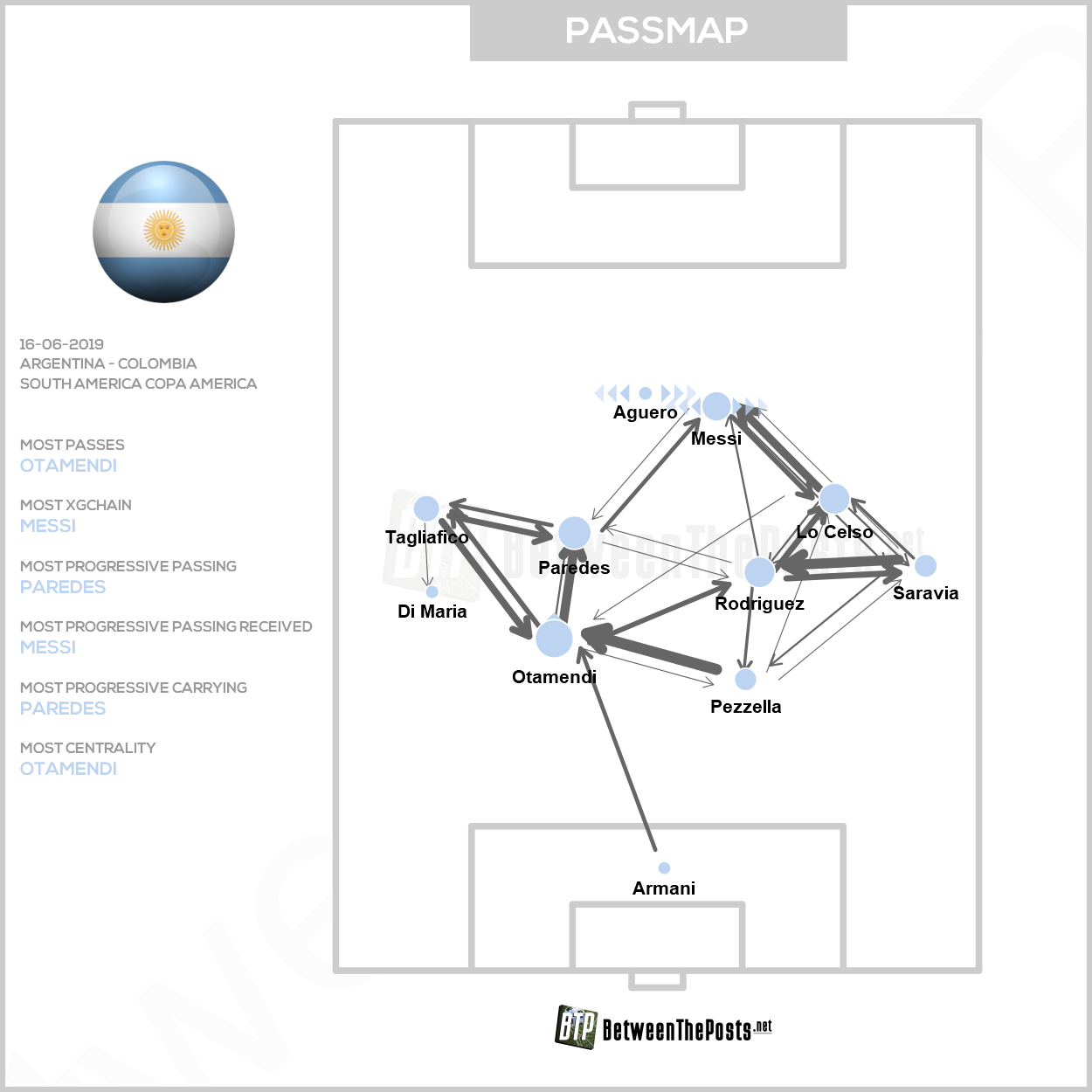 Somebody needs to pass the ball to the attackers

Kun Agüero and Messi are not the types of number nine and ten to play a game of long balls, meaning Argentina’s personnel choice forces them to play a passing game. However, Argentina’s positioning was horribly off all night long, meaning their buildup was predictable, easy to defend and offered very little passes into their attacking players.

It is common in international football that the two players in the double pivot 4-2-3-1 is one of the most frequently occurring formations in football. The two most defensive midfielders are called a ‘double pivot’. stand on a slightly different horizontal line, in order to create more passing options. Leandro Paredes and Guido Rodríguez mostly stood on the same line for the entire match. Whenever one of them would get on the ball in a somewhat dangerous position, Colombia’s central midfielders Cuadrado and Mateus Uribe would step out from Colombia’s 4-1-4-1 shape and prevent them from playing forward. 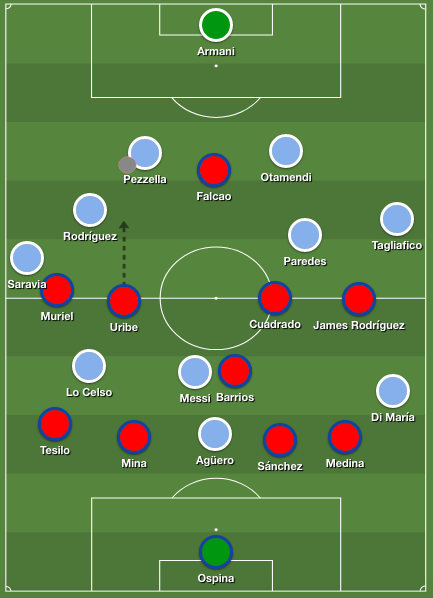 Argentina’s holding midfielders were very easily held out of the game.

Now, whenever your double pivot is not able to play a pass forward, after a few failed possessions, you can try to alter this. Two possible solutions would have been to position Rodríguez closer to the attacking midfielders and letting Paredes drop to create a three-versus-two, or by letting Lo Celso come deeper to collect the ball and distribute the ball forward. These two things were done incidentally, yet not structurally, contributing to the ineffectiveness of Argentina’s passing game.

Since passing through the midfield was made impossible – and Messi had clear intentions of shying away from collecting the ball deeper – the ball was mostly distributed upfield via the flanks. Argentina’s left side was highly dysfunctional all game long, with Ángel Di María instructed to keep the width and Tagliafico never underlapping. Underlap means that the full-back joins the offensive play by playing on the inside of the winger he supports. This is the reverse of an overlap, where the full-back plays on the outside and the winger moves inside. Di María was put in a one-versus-one situation with his fullback exactly zero times in the first half and was subbed off at half-time for Rodrigo de Paul.

When attacking, the amount of players Argentina held outside of Colombia’s defensive block A defensive block is the compact group of defenders that defends a particular zone, either their own half in a medium defensive block, or the zone around their own box in a deep defensive block. was staggering. Since most of the attacks went through the right, Messi would get on the ball in the final third, The one-third of the pitch that is closest to the opposition’s goal. looked up, only to find Agüero marked by two center-backs and Di María on the far side. All in all, an extremely ineffective way of attacking, and because the holding midfielders were positioned so far away, any form of stopping Colombia’s early transitions were impossible.

Colombia is less predictable, yet not good

In possession, there were some similarities between Argentina and Colombia. Both teams had the left flank occupied by a traditional winger and a midfielder on the other side (Rodríguez for Colombia, Lo Celso for Argentina). Because Colombia played with three midfielders and James Rodríguez was constantly overloading the midfield, their buildup was better than Argentina’s. As a result, they had little over 55 percent possession in the first half.

The unpredictable Cuadrado had taken it upon himself to transport the ball from defense to attack, performing a playmaking midfield role he has also been given at Juventus in their 4-4-2 shape, coming inside to support Miralem Pjanić. 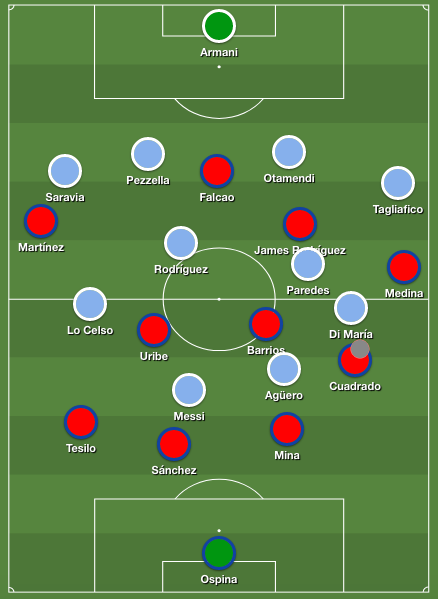 Cuadrado dropping in to distribute the ball upfield, this drags out Di María, meaning there is space to play in for James.

It was also easier for Colombia to circulate the ball, because Argentina defended in a 4-4-0-2 formation on their own half, Agüero only incidentally dropping back to help out and Messi performing his usual walking ritual off the ball.

Compared to Argentina, Colombia had a good plan in possession, but it was not that adventurous or attacking. This is also not something Queiroz is particularly known for. Meaning that tactical developments aside, this was a pretty boring match, which rightfully went to half-time at 0-0. 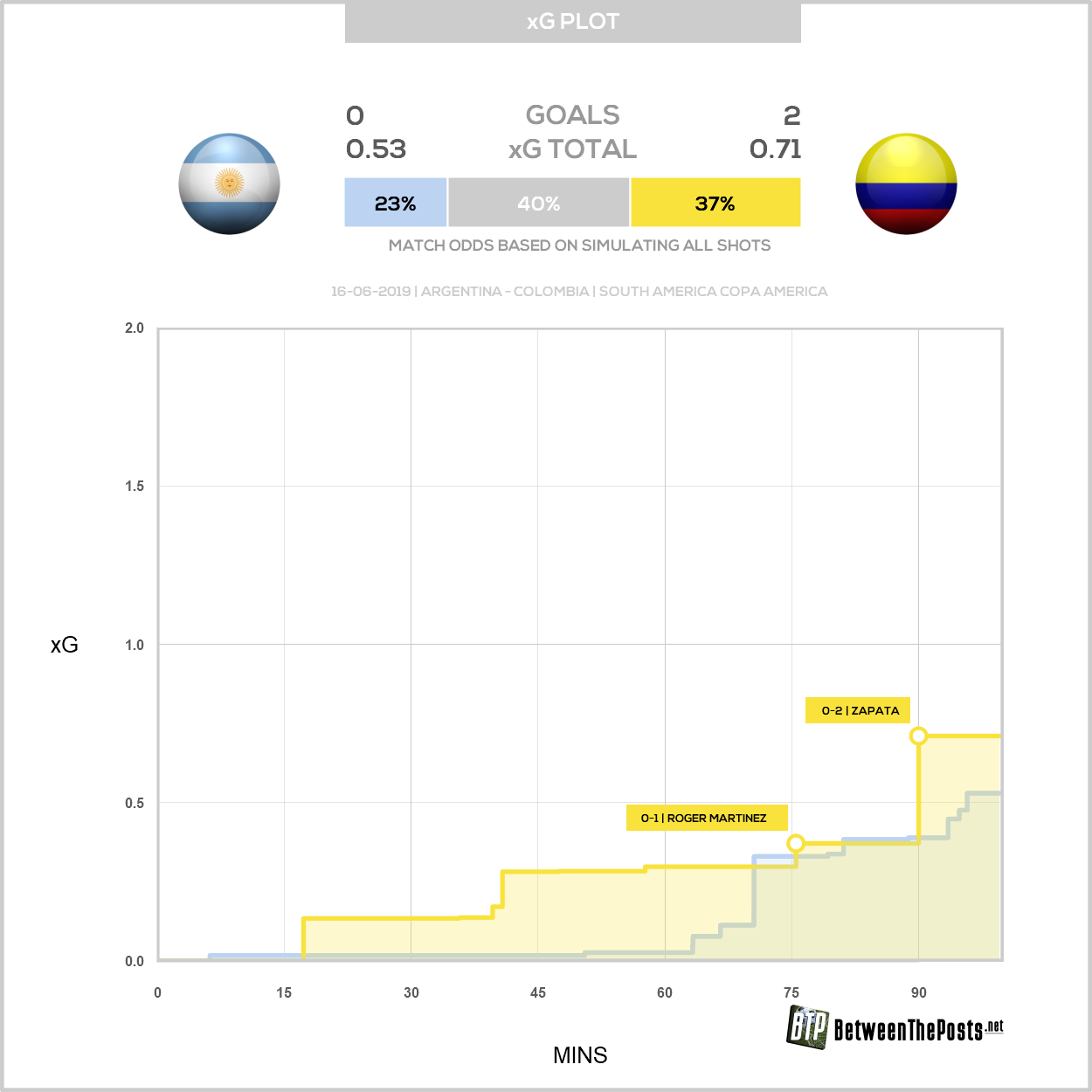 After the break, Argentina had their best spell of the match, making a more even match because Messi decided to take matters into his own hands, come deeper to act both as the main playmaker and the focal point in the Argentinean attack. As a result, the left winger – now De Paul – was brought into the match more, while Lo Celso had more opportunities to exert control. Defensive transitions were still a mess however, making this a more open and lively contest than it had been before the break.

It did offer Argentina the best chances of the match, albeit from set pieces, since creating from open play was still a problem. In the 59th minute, center-back Germán Pezzella nearly headed in a beautifully worked corner kick, while Messi arguably had Argentina’s best chance in the 65th minute, when a scrimmage fell on his head. The captain’s headed effort went wide by inches.

As is so often the case in tournament football’s close matches, the game was eventually decided by a few flashes of brilliance. In the 75th minute James launched a beautiful long pass into substitute Roger Martínez. The winger took on Saravia one-versus-one, dribbled inside and lashed the ball in the far corner.

After this, Argentina had to attack, meaning there was space on the break to play in. Duván Zapata – who must be wondering what he has to do to get a start for Colombia after a monster season in Italy – came into the game into the 81st minute and was on the end of one of Colombia’s attacks five minutes later, a move that started with a throw-in deep on Colombia’s territory but made dangerous by a failed Argentina press. Game over.

All in all, another dire offensive performance from the national team of Argentina, who managed to create 0.08 expected goals The amount of goals a team is expected to score based on the quality of the shots they take. from open play with an attack featuring Dí Maria, Messi and Agüero.

If anything, this game was a testament to the fact that football is a team sport, managers matter and tactical choices shape the way a game unfolds.

Argentina looked and will continue to look like a team coached by a caretaker manager who has never coached a senior team in his life. As a result, Messi once again is not put in a position to perform at his best level, and Argentina will probably not win the Copa América.

It is easy to talk about the drama of Argentina not winning any prizes with the best player of the planet on their roster for ten years, but another big takeaway from this match is Colombia’s defensive solidity. After only four matches, Colombia already show the traits of a team coached by Carlos Queiroz: a tight defense and a good plan in moments of transitioning from defense to attack. They can be considered outsiders for the title, maybe even the biggest favourite to win it behind Uruguay and Brazil.

Lionel Messi is not the same player for his country as he is for his club. True. Neither is Sergio Aguero. Nor Angel Di Maria. Nor Lo Celso, Otamendi, Tagliafico. Neither was Higuain, nor Mascherano, nor Banega. Can you see a trend emerging? 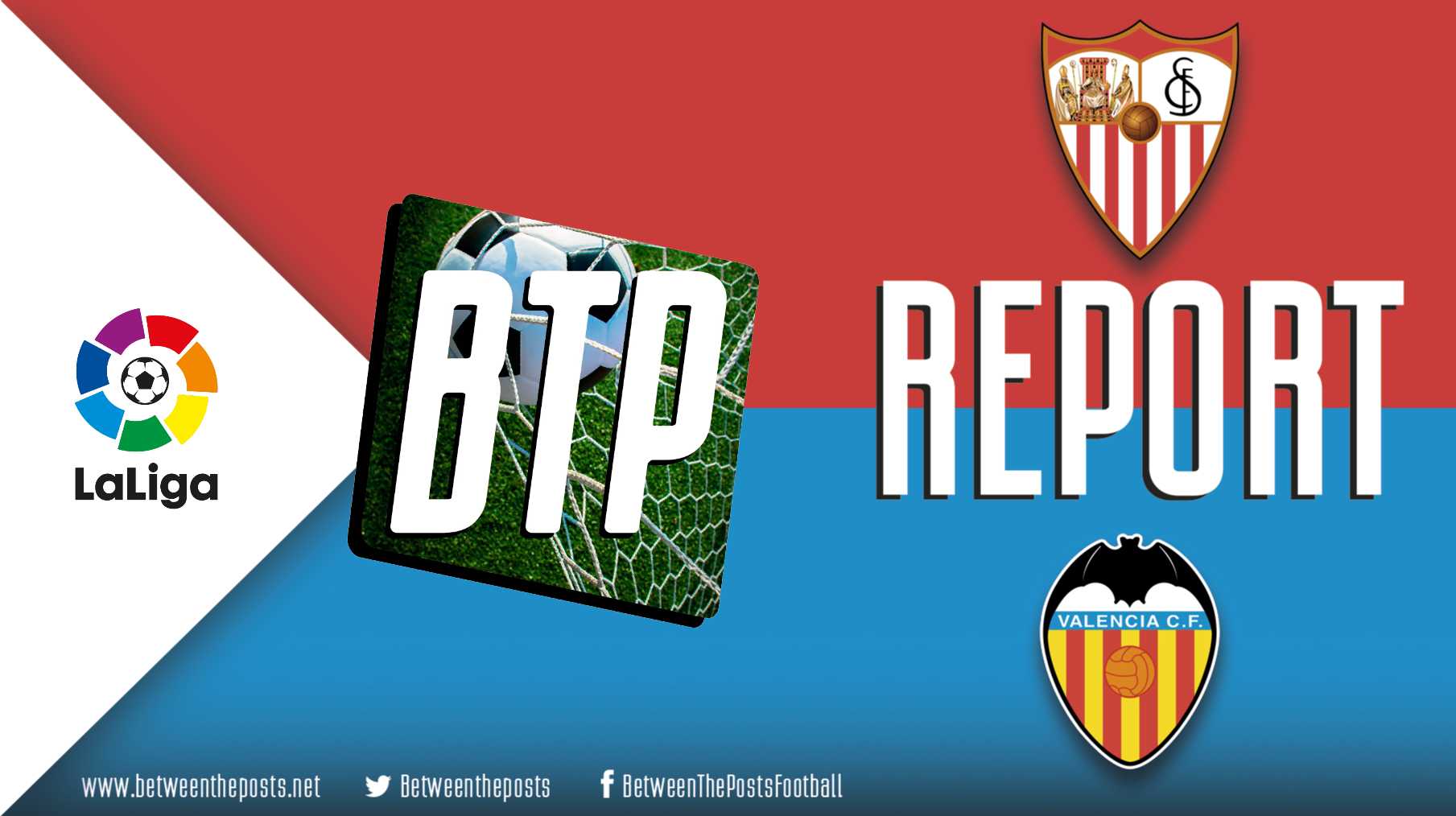 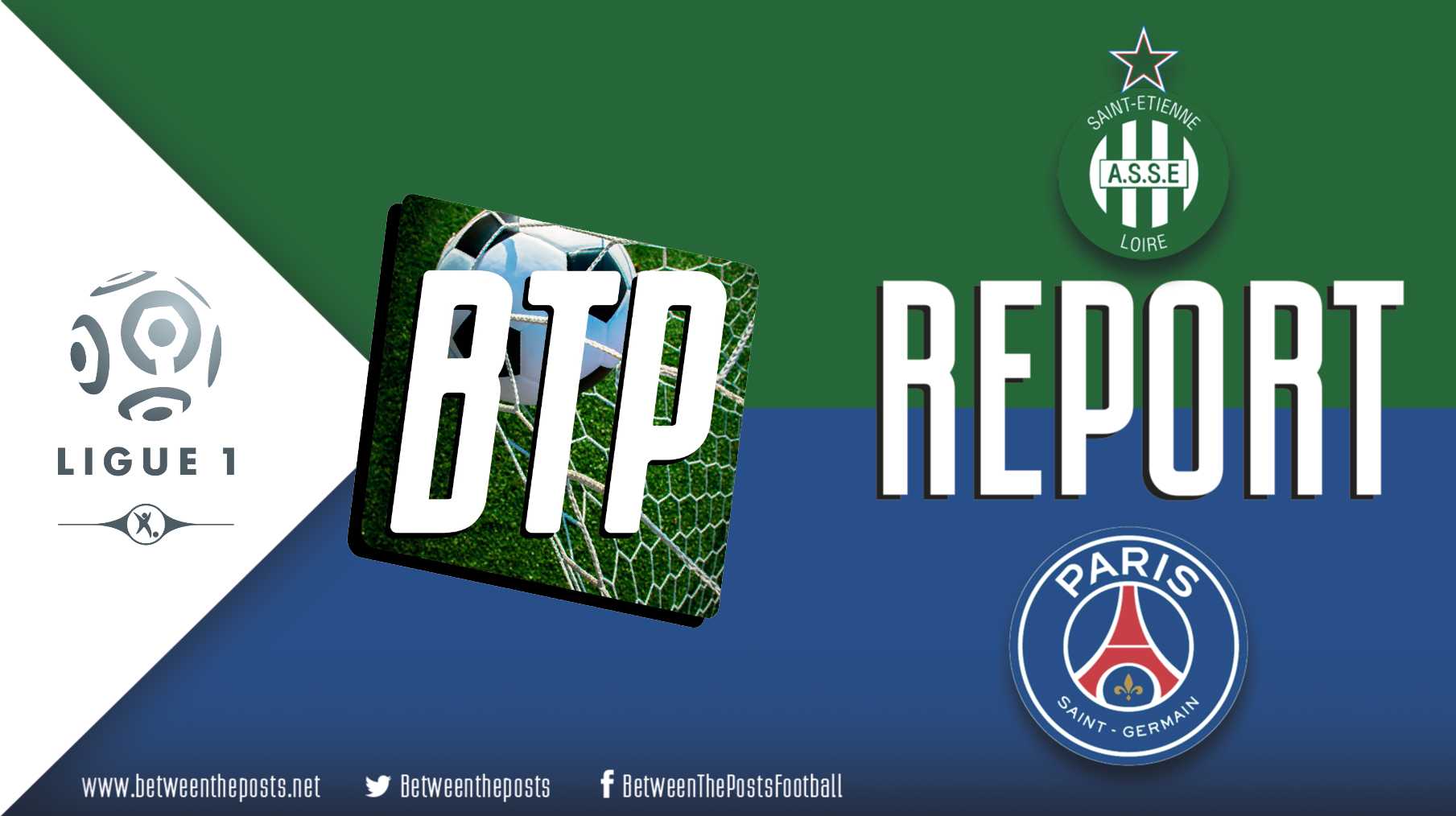