Croatia’s midfield is their biggest strength, and they had their fair share of possession here while struggling to threaten in forward areas. Argentina were happy to let this happen, knowing that they were sharper in attack. Lionel Messi and Julián Álvarez were the stars of this match, sharing three goals between them as Argentina eased past Croatia.

Argentina’s hard-fought win over the Netherlands on penalties landed them a semi-final against Croatia. Having lined up in a 5-3-2 system against the Netherlands, Lionel Scaloni returned to a 4-4-2 shape this time around with a back four of Nahuel Molina, Cristian Romero, Nicolás Otamendi, and Nicolás Tagliafico. Rodrigo De Paul, Leandro Paredes, Enzo Fernández, and Alexis Mac Allister made up the midfield, while Lionel Messi was once again joined by Julián Álvarez up front.

Croatia pulled off a dramatic win of their own in order to reach this stage as they knocked out Brazil on penalties after a spirited performance. Zlatko Dalić’s side lined up in their usual 4-3-3 system, with Josip Juranović, Dejan Lovren, Joško Gvardiol, and Borna Sosa in defense. The experienced midfield trio of Luka Modrić, Marcelo Brozović, and Mateo Kovačić supported a frontline of Mario Pašalić, Andrej Kramarić, and Ivan Perišić.

One aspect of Croatia’s game that helps them perform well in tournament football is their ability to retain the ball, even against top opposition. Against Brazil previously, they showed that they can have good spells of possession against world class players.

They had the majority of the ball in this match too. Argentina generally set up in a 4-4-2 shape defensively and would not press the ball far outside their own half. They were content to let Croatia have long spells of possession if necessary, as long as the possession was relatively harmless. 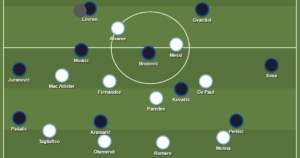 Argentina were comfortable defending in these situations.

Croatia’s midfield is the highlight of their team, and they were all able to get plenty of involvement on the ball in deeper buildup. Brozović distributed the ball from the number six zone, while Modrić and Kovačić were more mobile, roaming freely in their respective halfspaces to create connections.

The fullbacks were also relatively involved and created decent width. The problem Croatia had was at in attack, where they lacked the movement to create strong combinations or threaten the space behind the Argentina defense.

Any passes between the lines were aggressively snapped up by Argentina’s defenders who enjoy playing on the front foot, and there was little movement into depth from Croatia to deter them from playing this way.

In the first thirty minutes, Argentina did not do that much in possession. The team selection from Scaloni looked on paper to be one which intended to stifled Croatia’s midfield creativity, rather than focus on Argentina’s attacks, and this is what transpired.

When Argentina did have the ball, the fullbacks provided most of the width. Molina attacked on the right while De Paul dropped deeper in the right halfspace. The left side belonged to Tagliafico as Mac Allister took up more advanced positions in the left halfspace or number ten position. Fernández was also active in this area occasionally as he pushed forward in a wide-ranging role, while Álvarez provided good movement on the last line. 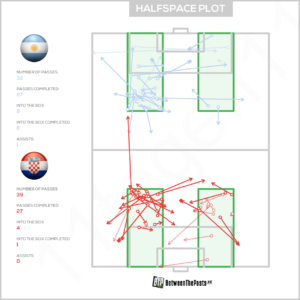 The focus of Fernández and Mac Allister on the left halfspace can be seen in the halfspace plot, as opposed to the right halfspace where De Paul remained deeper and Messi often vacated in order to roam into space elsewhere.

It was Álvarez’ movement in behind that helped earn Argentina’s first goal, as a disorganized Croatian defensive line allowed him to run through and win a penalty from Dominik Livaković’s foul. Messi smashed the penalty home to put Argentina 1-0 up.

Álvarez was in the action again five minutes later as he led a counter-attack, fighting his way through Croatian defenders and eventually guiding the ball past the goalkeeper to make it 2-0. After not having done too much attacking across the first half, Argentina found themselves with a two-goal lead going into the break.

The shape has varied, but this is how Argentina have aligned themselves on the ball (out of 442):

- High & wide FBs.
- Paredes deep/left 6 (Fernández can too but moved further up on left.)
- Heavy occupation in halfspaces (Messi does what he wants, de Paul bounce between lines.) pic.twitter.com/gOlfp6q55f

Croatia knew they needed to chase the game in the second half, and this was clear in their half-time substitutions as Mislav Oršić and Nikola Vlašić both entered in wide attacking positions, replacing Sosa and Pašalić which meant that Perišić moved to a left back role.

Only five minutes into the second half, Bruno Petković also came on to replace Brozović. Croatia now had a 4-2-3-1 with Modrić and Kovačić as the deepest midfielders, while Kramarić played just behind the target man Petković.

Despite the new personnel, things largely proceeded in the way that they had in the first half during Croatia’s possession spells. Argentina’s defense was stubborn, and they added to it around the hour mark as Lisandro Martínez was brought on for Paredes. Scaloni once again deployed the back five, adding extra security to the defensive line against the increased occupation of forward areas that Croatia now possessed.

With just over twenty minutes remaining, Argentina added their third. It was a goal conjured up by a moment of brilliance from Messi, as he turned Gvardiol inside-out on the right side before finding Álvarez with a cutback to sweep the ball into the net.

Messi’s performance in general was once again at a very high level. He enjoyed a free role as always, picking his moments to become active in the attack. The increasing desperation of Croatia going forward also opened up more spaces for him in the second half.

Scaloni took the opportunity to rest players in the final stages of the game as Argentina continued to be untroubled by the Croatia attack. De Paul and Álvarez were taken off with fifteen minutes to go, replaced by Exequiel Palacios and Paulo Dybala. Ten minutes later, Juan Foyth and Ángel Correa were given cameos as Molina and Mac Allister took well-earned rest in anticipation of a Sunday’s World Cup Final. 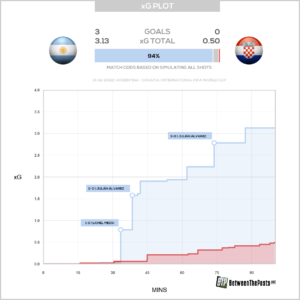 Argentina were pragmatic here and reaped the benefits. They were unconcerned by Croatia’s ball-retention, instead focusing on keeping the defensive shape solid and waiting for their moment to strike with the talent they have up front. Messi’s otherworldly talent will rightly grab the headlines, but Álvarez was outstanding in this match too.

Croatia deserve credit for reaching this stage, but they did not quite have the tools for Argentina’s stubborn defending on this occasion. Modrić gave a classy performance as always in what was likely his last World Cup game, but going forward there was just not enough firepower and they were completely unable to control Messi and Álvarez at the other end.