Arsenal pressed Liverpool’s buildup and exploited their defensive issues on the right flank in the first half. Later on, Liverpool adapted and took advantage of Arsenal’s shaky defending to score. With some good substitutions and a never-say-die attitude, Arsenal scored a late, well-deserved goal to tie the game.

Under Unai Emery, Arsenal have enjoyed a tremendous run of form, having won seven out of their last eight league games. However, these results have been somewhat flattering to Arsenal’s actual performances. Arsenal’s defense has struggled in their transition to playing with a higher defensive line. In the offensive phase, Arsenal plays out from the back in a somewhat simple and predictable fashion, prone to be stopped by good pressing schemes.

Arsenal have achieved their stunning run of form thanks to a hot streak in finishing, outperforming their expected goals by a massive seventy percent and converting shots to goals at a ridiculous rate of nineteen percent. Most elite teams in Europe average 10-15% over larger samples.

Liverpool have enjoyed their best start ever to a Premier League season, winning eight games out of their last ten, only drawing against their chief rivals for the title, Manchester City and Chelsea. The signings of goalkeeper Alisson Becker and center-back Virgil Van Dijk have turned Liverpool into a very solid defensive unit that commits very few mistakes inside their box. This has allowed Jürgen Klopp to use a more conservative defensive approach with a medium block A medium block refers to a team that retreats in their own half out of possession, generally only disrupting their opponents some way into their own half. and pressing traps A pressing trap is a predefined plan to leave a particular player or zone open, to invite a specific pass. Upon a pass to that player or into that zone, a rapid coordinated team press on that player or zone is exerted. instead of a high press.

Arsenal started with their traditional 4-2-3-1 formation. Fullbacks Hector Bellerin and Sead Kolašinac recovered from their injuries, while center-back Rob Holding still takes the place of the injured Sokratis Papastathopoulos. In midfield, the double pivot of Granit Xhaka and Lucas Torreira continued, with Mesüt Özil as the number ten. Up front, Pierre-Emerick Aubameyang and Henrikh Mkhitaryan played on the wings, with Alexandre Lacazette as the striker.

Klopp and Liverpool used their eternal 4-3-3 formation, with the usual suspects in defensive and forward lines. With Jordan Henderson and Naby Keïta unavailable due to injuries, the midfield trio was composed of Fabinho, Georginio Wijnaldum, and James Milner.

Arsenal and Liverpool suffer from comparable issues when playing out from the back. Both have relatively simple and predictable buildup mechanisms and suffer from individual deficits in press resistance. However, in this game Arsenal exploited their opponent’s buildup issues better than Liverpool did.

Under new manager Emery, Arsenal now have one of the most proactive and intense defending schemes in the league. Their midfielders and forwards press high and their defensive line pushes up to maintain compactness. In this game, Özil and Lacazette often pushed up as far as Liverpool’s center-backs, while Aubameyang and Mkhitaryan pressed against Liverpool’s fullbacks. 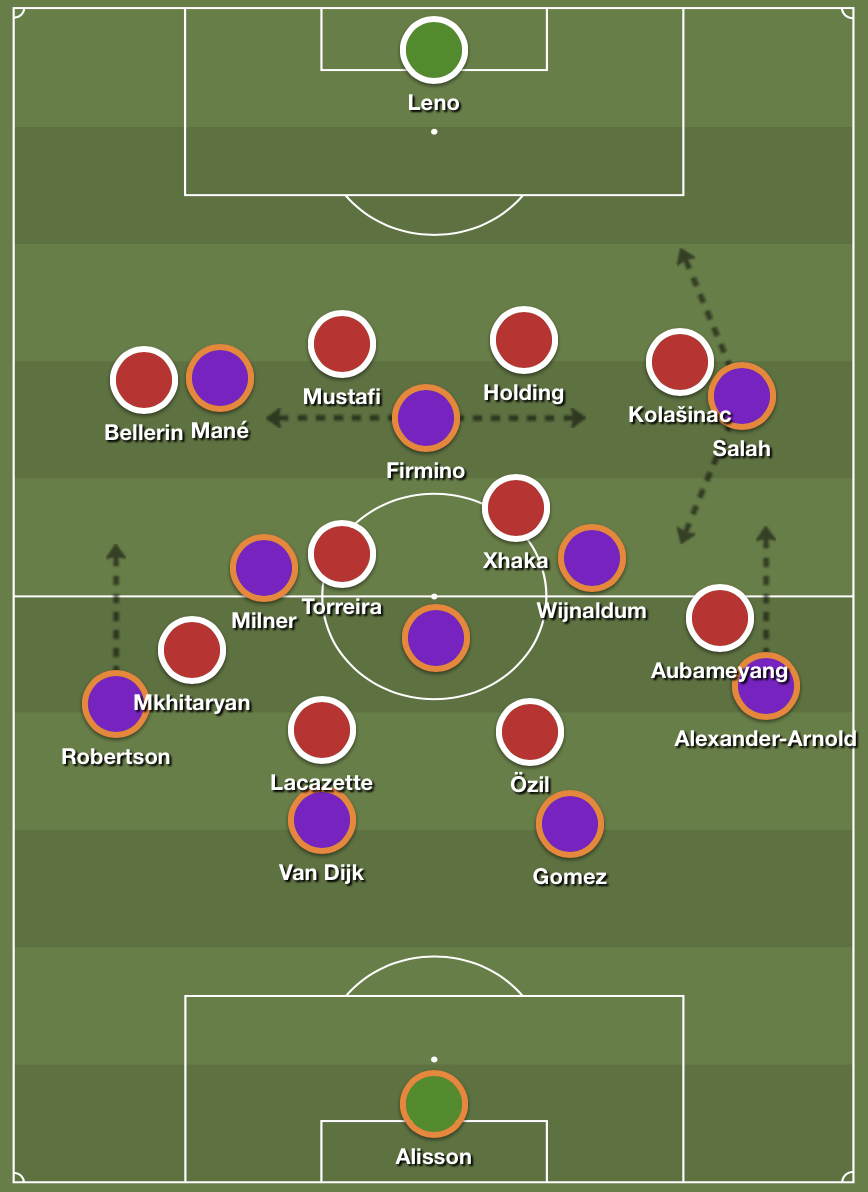 With Liverpool’s midfield intervening relatively little in this buildup, Liverpool defenders often had to depend a lot on very direct, vertical passes to their front trio of Sadio Mané, Roberto Firmino and Mohamed Salah, who were well-guarded by Arsenal’s defense. Only Salah managed to consistently evade or dribble past Arsenal defenders and consistently move his team forward and toward Arsenal’s box.

This tendency for direct play is not new in Liverpool and it is a well-established part of Jürgen Klopp’s philosophy. Their game on the ball has always been relatively direct and simple, aimed to getting to the front trio as quickly as possible. However, that also means that their offensive mechanisms depend a lot on the inspiration of the front three and their ability to run at and beat defenders on their own. Of the front three, Salah was most successful in leading Liverpool’s attacks, but he was often somewhat isolated against Arsenal’s defense. 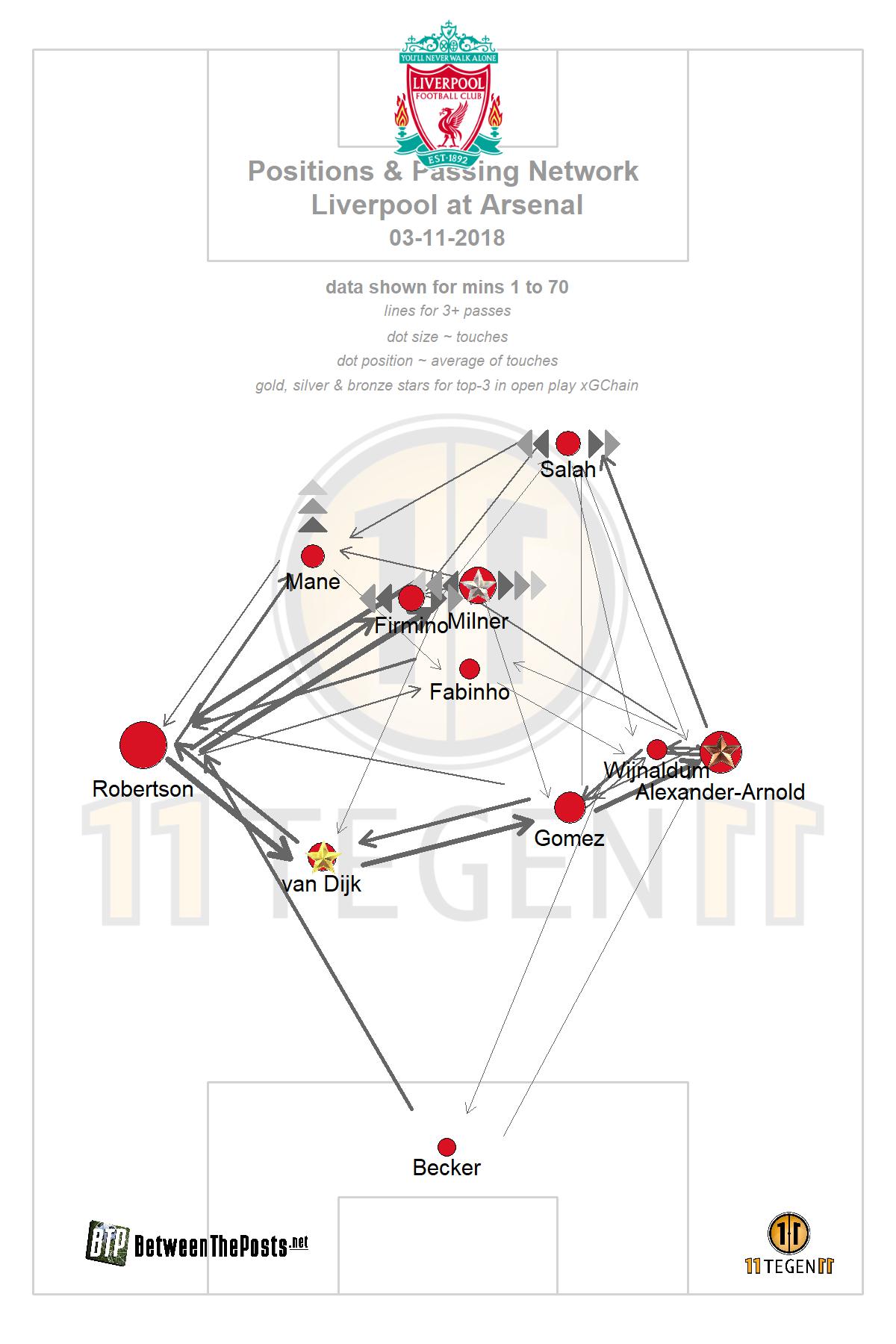 Liverpool’s passmap shows how important the full-backs were to progress the ball up the field.

Arsenal’s buildup play was much less hurried, aided by by Liverpool’s conservative defensive scheme. Arsenal’s center-backs and even their central midfielders often managed to keep the ball with relatively little interference from Liverpool’s medium block. They had more than enough time and space to think carefully about where and how to send the ball to the attackers.

During this buildup phase, wingers Aubameyang and Mkhitaryan tucked in, often exchanging positions with Özil and Lacazette. All four attackers roamed between Liverpool’s defensive and midfield lines, aiming to attract their attention and open up spaces on the wings for fullbacks Bellerin and Kolašinac.

In such a buildup context, Arsenal could go wide to their fullbacks and try to create overloads When one team has more players in a certain area or zone than the other team. on the wings or try to create quick passing combinations through the center. In the latter case, Lacazette, Özil, and even a free-roaming Mkhitaryan would try to receive tense, driven passes with their backs to goal and quickly flick the ball to a teammate. 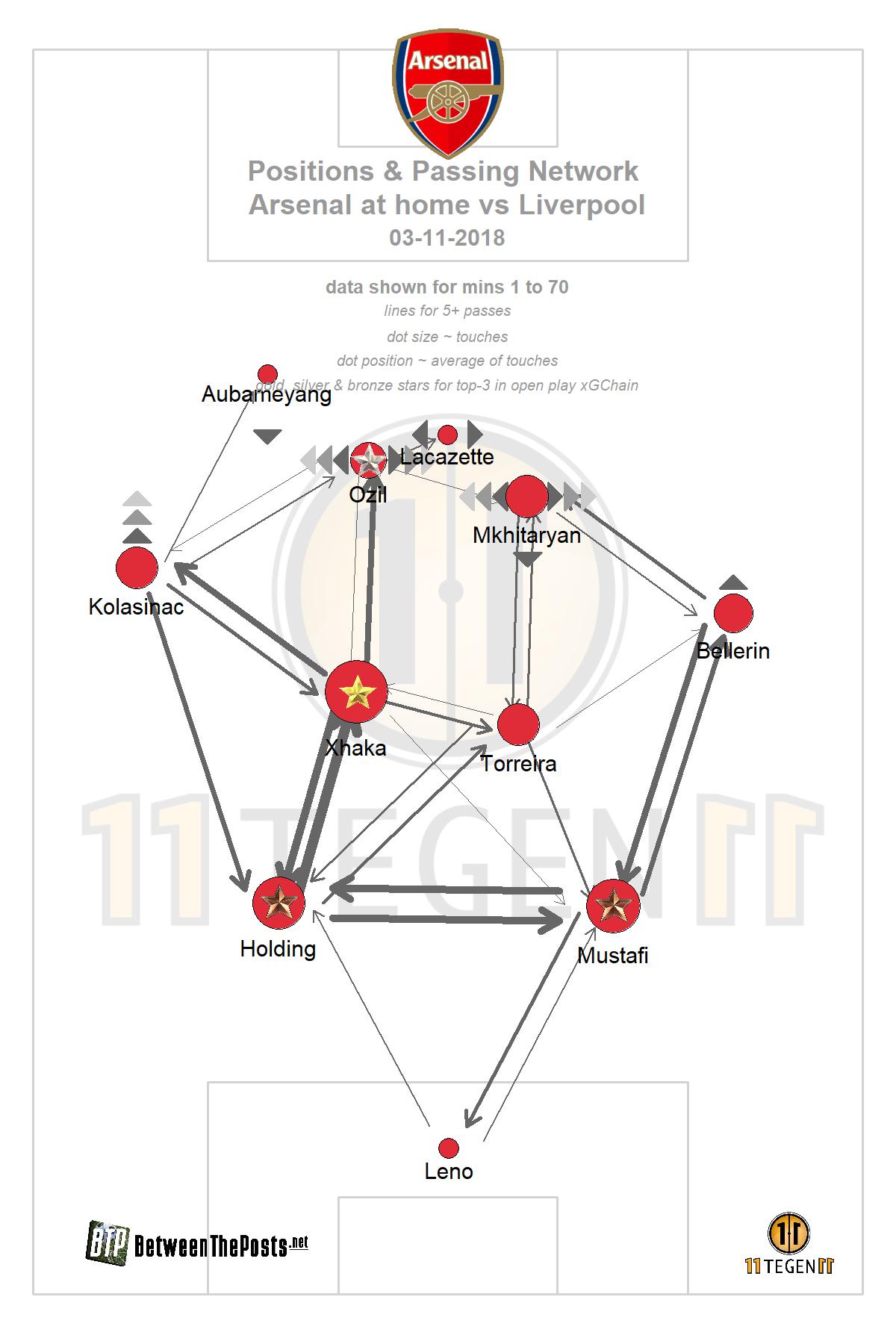 Arsenal’s passmap shows – as usual – how important Xhaka is to the team’s ball circulation.

Arsenal attacked heavily on the left side. They took advantage of Trent Alexander-Arnold’s struggles at defending space well – he is better at defending one-versus-one situations – to overload him and get good passes and runs behind his back. However, it must be said that Alexander-Arnold was also outmanned, since Salah—the winger on his side—tracked back a lot less than the other two Liverpool forwards.

Despite Arsenal’s attractive buildup play, they did not necessarily create better chances than their opponents. Despite Alexander-Arnold’s struggles, Liverpool’s defense of their box was very solid overall and cleared a lot of incoming danger, while Arsenal’s defense was much shakier. Arsenal defenders never figured out how to defend against Van Dijk in set pieces and crosses and the Dutch center-back was as dominant in Arsenal’s box as he was in his own box.

In the second half, manager Jürgen Klopp tried to help the outmanned and overloaded Alexander-Arnold. Liverpool shifted to a 4-4-2 shape in defense, with Milner shifting from his original position on the left to the right wing. With the help of Milner and his outstanding defensive awareness, Liverpool was finally able to shut down their right flank and prevent Arsenal’s constant overloads on that side. 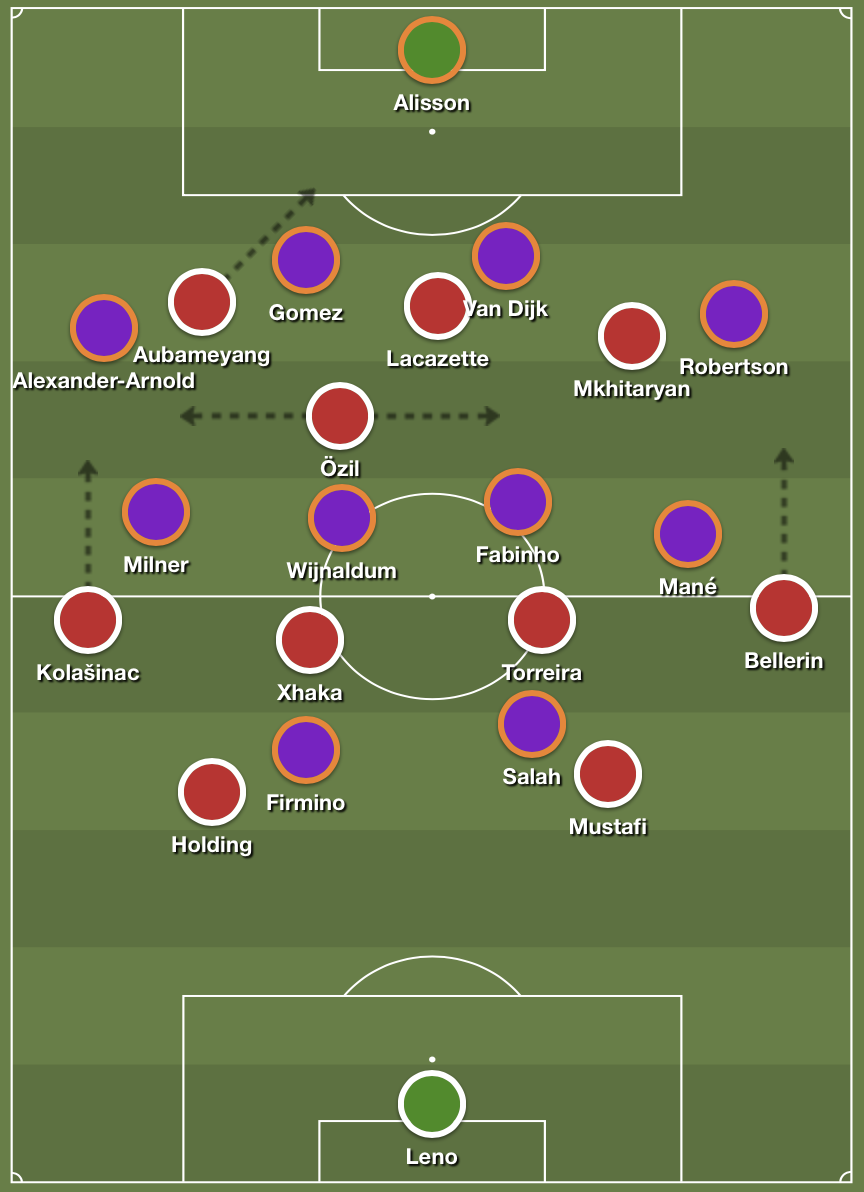 With Arsenal’s main avenue of attack now shut down, their attack soon became sterile. Arsenal kept most of the possession and hindered Liverpool’s buildup, but their attacks barely managed to scratch Liverpool’s reinforced defense. From the 45th to the 80th minute of the match, Arsenal generated just a single shot.

Liverpool still struggled to play out from the back and create chances consistently, but especially in big matches they tend to be very efficient with the few chances they have. In the 61st minute, Mané smartly ran behind Bellerin and crossed into Arsenal’s box. Leno’s clearance was deflected by Holding into Milner’s feet, and the Liverpool midfielder coolly took advantage of Arsenal’s shaky defending to score.

Emery and Arsenal stage their comeback

After the goal, it would not take long for Arsenal to respond. Emery subbed in Alex Iwobi and Aaron Ramsey for Mkhitaryan and Aubameyang. Özil moved to the right wing, Ramsey played as the number ten, and Iwobi played on the left. Interestingly, Xhaka switched positions with Torreira and moved to the right side, with the aim of sending long diagonal switches of play to Iwobi and Kolašinac on the left.

By the 80th minute, an increasingly desperate Emery decided to go all out and substituted Danny Welbeck for Kolašinac. Arsenal shifted to a 4-4-2 formation, in which Iwobi played left back, Ramsey and Özil played on the left and right wings respectively, and Welbeck and Lacazette played up front.

This final change of scheme did the job very quickly. In the 82nd minute, Welbeck divided the attentions of Liverpool’s center-backs and allowed Lacazette to escape from an attentive Van Dijk and chase a through ball by Iwobi. After avoiding Alisson and turning around, Lacazette shot from a complicated position to score a brilliant and well-deserved equalizer for Arsenal.

Emery’s tactical and motivational work as well as the streak of good results are building up Arsenal’s confidence. The team’s buildup phases might still need more work, but once Arsenal sets up camp in their opponent’s half, they play well, create chances and score goals – even if their shot conversion seems unsustainable.

The attacking mechanisms designed by Emery and the talent of his offensive players are shining through. Emery’s substitutions and the players’ strong, competitive mindset allowed Arsenal to react positively against adversity and tie the game. However, Arsenal must still improve in defending of their box if they want to make the most of their solid offensive game.

This is not a bad result for Liverpool, as they got a point away against a top six opponent. However, this match does remind us of some tactical issues that Klopp and his staff will need to keep working on. The team struggles significantly in buildup tasks, especially without press-resistant midfielder Naby Keïta. Furthermore, one wonders if they are overusing their more conservative defensive scheme. This defensive system allows the team to conserve valuable energy in a sixty-plus match season, but playing a rival like Arsenal might require a more aggressive defensive setup.