For the opening 40 minutes of this match you could have been excused for thinking you were watching Arsène Wenger’s toiling Arsenal side against Claudio Ranieri’s title winning Leicester City team. While Arsenal’s slow, short passing in midfield was achieving little, Leicester’s fast, direct breakaways were creating opportunities for a lively Kelechi Iheanacho. After some time, Arsenal woke up to the fact they could do what their opponents had been doing – only better.

Unai Emery’s Arsenal set out in a 4-2-3-1 formation that settled into a 4-4-2 when Leicester had the ball, a ploy that granted Mesut Özil very little defensive responsibilities. The three attacking midfielders behind Alexandre Lacazette played in a fluid but very narrow formation, with the full backs being instructed to provide width going forward. Stephan Lichtsteiner replaced the injured Nacho Monreal at left back and, being pushed so far forward, appeared to be a target for Leicester’s counter attacks.

Claude Puel set up his side in a 4-3-1-2. The technical James Maddison played just behind Jamie Vardy and Ihenacho, instead of out on the left as he has been recently. The recent England call-up showed off all his best qualities – always looking for the ball, using his agility and ball control to spin away from challenges and dribbling at defenders before finding a teammate with an intelligent pass. 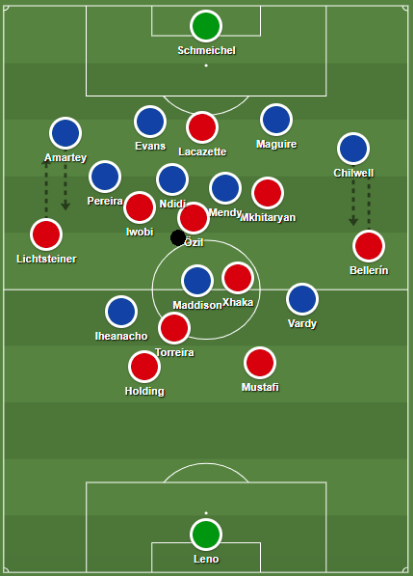 Arsenal attacking, with the attacking midfielders playing narrow. Ball displayed at the feet of Mesut Özil.

Leicester dominate the opening
Maddison’s energy was just a sign of what was to come from the whole Leicester team in the opening phase of the match. As soon as they regained possession – which was often and easily due to some inaccurate passing and poor control an Arsenal midfield unable to work it beyond the Leicester defense – Leicester would have four or five players making vertical runs ahead of the ball. Most often Leicester would direct their counterattacks down the right flank, into the space behind the advanced Lichtsteiner. This way, Iheanacho was provided with multiple striking opportunities.

Another way Leicester troubled Arsenal was in the air. Firstly a stonewall penalty for Leicester was denied, as Arsenal’s central defender Rob Holding cleared a high ball in a fashion more suited to the basketball court. Despite this let off it was only minutes before Leicester threatened again from the air with Harry Maguire finding himself with a free header at the back post. This time it was Bernd Leno who used his hands in a perfectly legitimate and impressive fashion to deny the opening goal.

In the 31st minute, Leicester were finally rewarded for their positive play. They regained possession on the halfway line and immediately, Ben Chilwell set off in a sprint to provide an option down the left flank. The ball was played into his path and with one touch he zoomed past Héctor Bellerín into the box. Bellerín recovered only enough for Chilwell’s cross to deflect off of his foot and into the net past a wrong-footed Leno and Leicester found themselves leading at the Emirates Stadium.

Arsenal emulates Leicester’s tactics
To their credit, Arsenal did not wait until half-time to regroup and change their approach. Having seen Leicester attack with pace and flair via their number ten, Arsenal and Özil took a leaf out of their visitors’ book. In the 40th minute Özil and Lacazette combined in a speedy counter attack to provide a shooting opportunity for Alex Iwobi. His shot was saved by Kasper Schmeichel but it should have served as a warning shot for what was to come just minutes later.

Özil ran with the ball directly towards Leicester’s penalty area. He slipped it out wide to Bellerín who, with the Leicester players all retreating at full sprint, intelligently played the cut back pass back to Özil, who had continued his run to find himself in space in front of the Leicester backline. The German beautifully took the shot with one touch and the ball bounced off the far post and into the goal.

The second half continued as the first had finished. Leicester were unable to combat Arsenal’s faster movement of the ball. While Arsenal had been playing at a lower tempo in the first half, the midfield three of Leicester had appeared to be solid. Now with Özil and Iwobi running directly at them with the ball, the Leicester midfield just retreated without challenging the player on the ball. This put their entire team on the back foot and made Leicester more vulnerable to balls that were cut back as their defensive and midfield lines were sprinting towards their own goal, unable to turn quickly to close down the Arsenal players receiving the ball in space.

Özil turns creator
Arsenal’s change of focus in possession had brought them level. It would be one of the first substitutions of the match that pushed them well ahead. On the hour mark Pierre-Emerick Aubameyang entered play in a unexpected tactical switch by Emery, who put Granit Xhaka to an unfamiliar role at left back.

Less than two minutes later Özil played a perfectly weighted pass in between the left back and centre back that Bellerín ran onto. The Spaniard was able to play a simple low cross for Aubameyang to run onto from his wide left position and tap in his first touch of the match to put Arsenal 2-1 ahead.

Özil was not finished there though. Only three minutes later he took part in a gorgeous Arsenal attack three times, despite only touching the ball twice. He began the attack with a flick near the halfway line before spinning to run towards the Leicester box. He showed great awareness to step over the low cross from Bellerín, continuing his run into the box to be found by Lacazette. Now on the six yard line he chipped the ball across the box to the awaiting Aubameyang who finished the move for his second goal and put Arsenal ahead 3-1.

Aubameyang’s name may be on the scoresheet twice, and there is merit in crediting him for getting himself into the position to tap in these goals, but it was Özil who was shining for Arsenal. The contrast to the opening 40 minutes was underlined by the departure of the now anonymous James Maddison for Shinji Okazaki, with 15 minutes to go.

Arsenal easily saw out the match, especially altering Bellerín’s advanced positioning. Leicester ended the match with ten men, having made all available substitutions before Vardy left the pitch (presumably injured, although he ran down the tunnel). 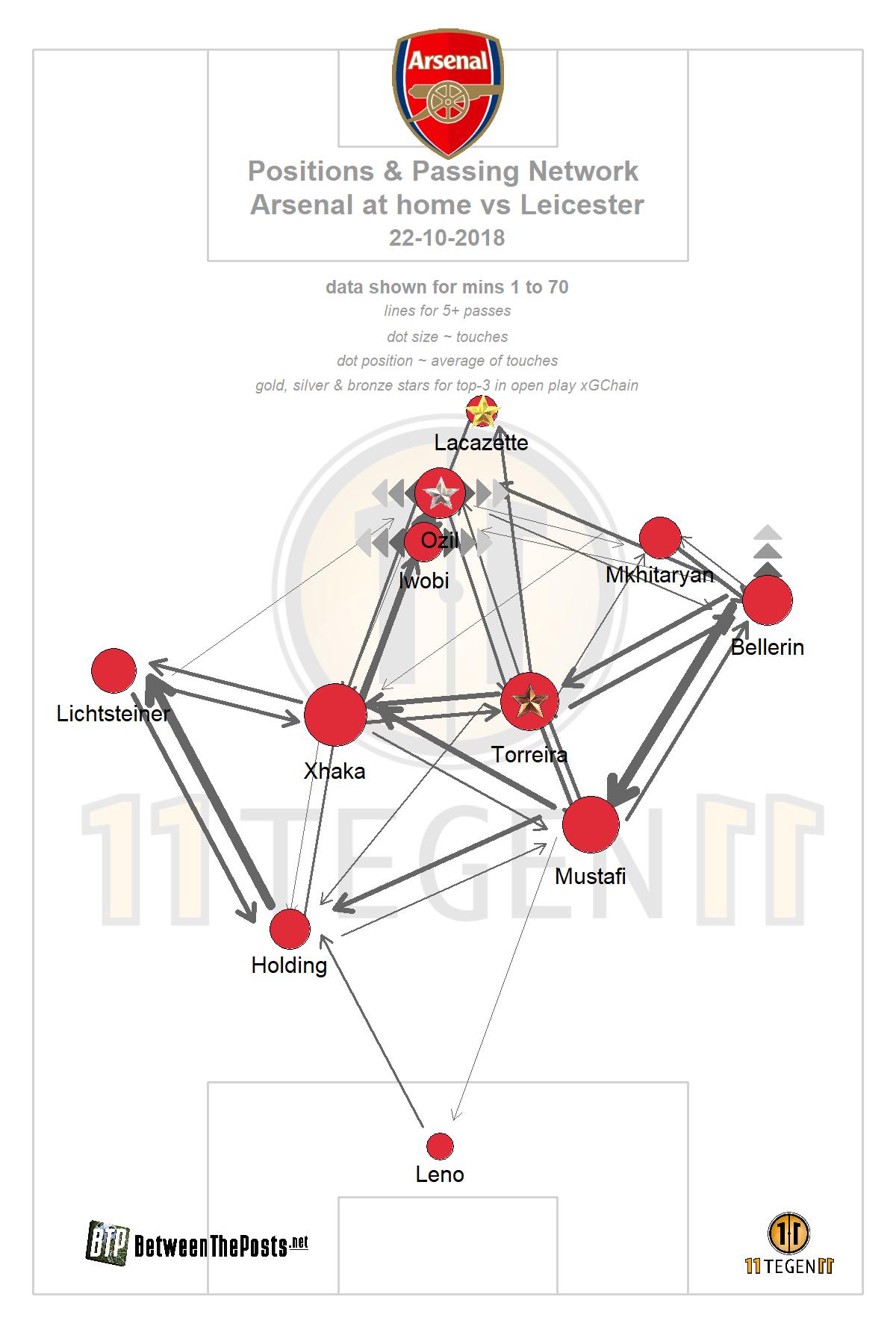 Takeaways
Unai Emery has now led his side to ten wins in a row in all competitions and the presence of an on-form Mesut Özil will have the rest of the English Premier League’s title challengers fearing the return of a strong Arsenal into the mix. Arsenal showed that they were able to adapt when their patient attacking style was not having any effect.

Leicester’s performance was strikingly similar to their opening day defeat at Old Trafford where they also dominated the opening spell of the match before being outclassed by a superior opponent. You can either take encouragement from the fact they are able to trouble these sides at all or be concerned that they cannot keep up this level for ninety minutes.

Use the arrows below to slide through statistical match plots. 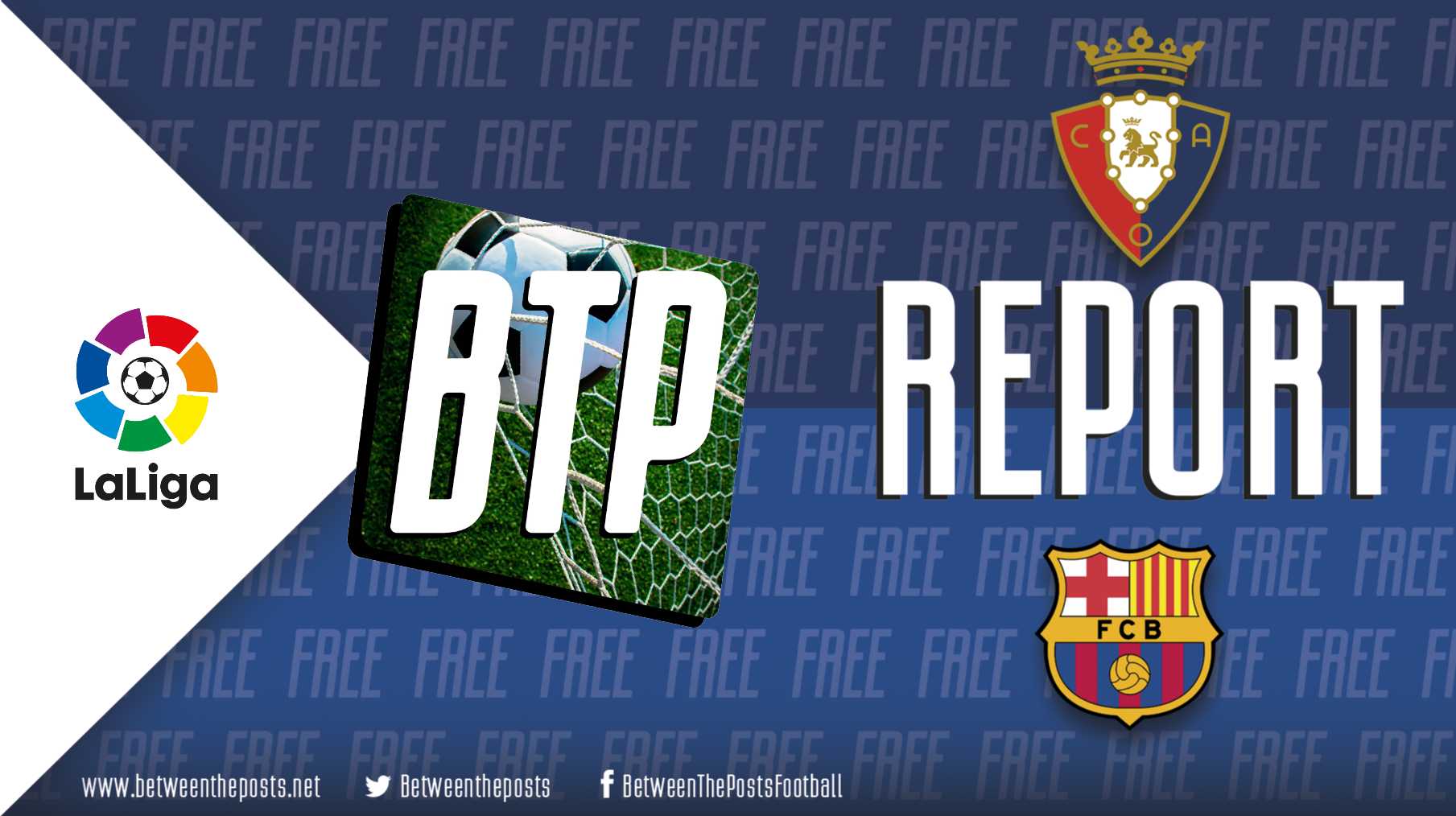 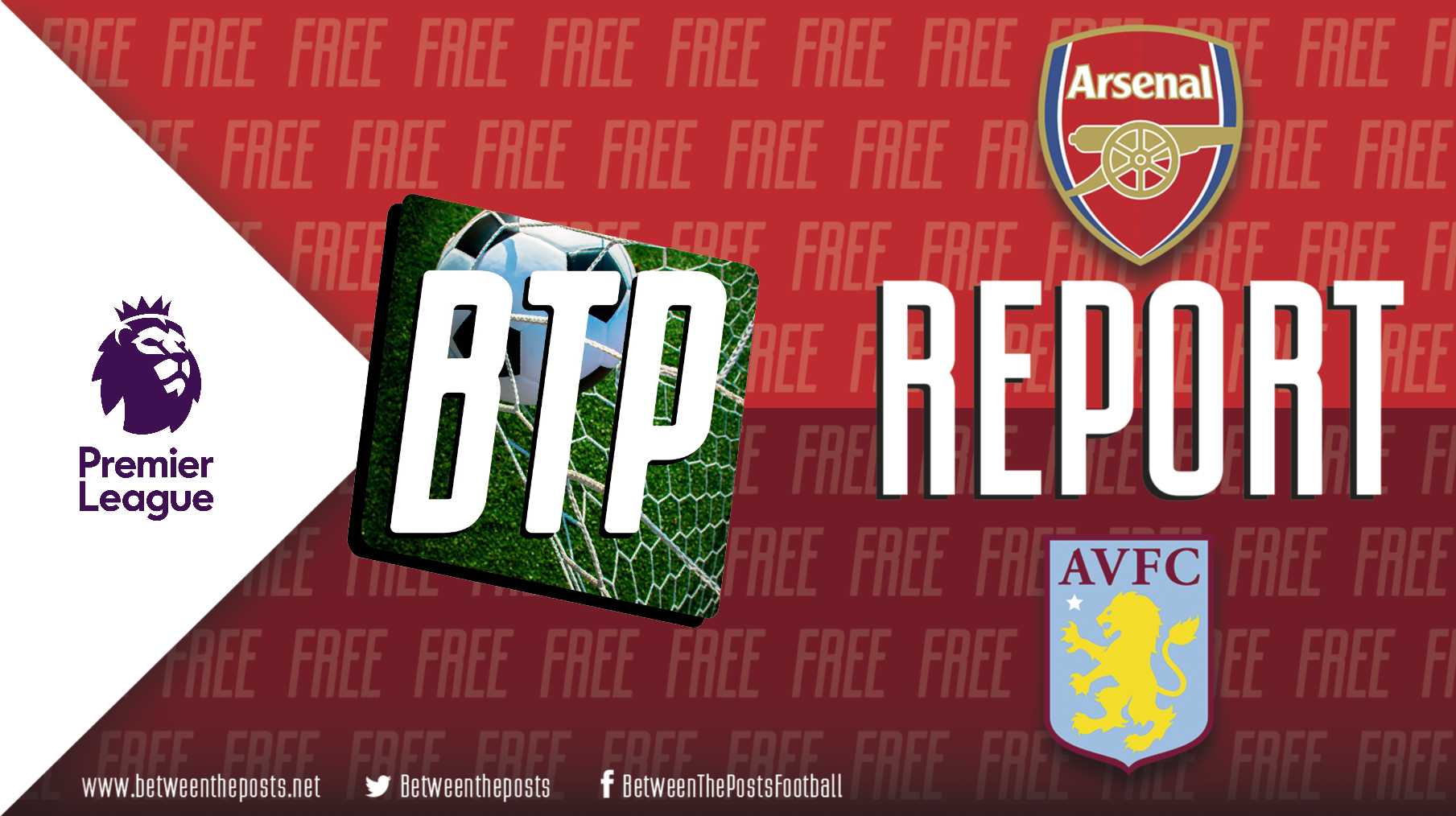