A match dominated by Liverpool ended in defeat as costly errors from Virgil van Dijk and Alisson handed Arsenal the victory at the Emirates Stadium. The win boosted Arsenal’s hopes of securing European football for the upcoming season, and stripped away Liverpool’s aspirations of crossing the 100-point record established by Manchester City.

Arsenal’s form since the resumption of football has been patchy at best, with morale boosting victories over Southampton and Norwich giving way to a disappointing defeat against rivals Tottenham Hotspur in the North London Derby. Given the importance of the FA Cup in securing European qualification, Mikel Arteta clearly prioritised the upcoming semi-final against Manchester City, as demonstrated by his starting eleven.

Kieran Tierney, David Luiz and Rob Holding made up the back three, flanked by Bukayo Saka and Cedric Soares as wing-backs. Ahead of them sat the double pivot Two central midfielders next to each other. of Granit Xhaka and Lucas Torreira, who made his first start since being side-lined with injury. In the biggest surprise of the night, top scorer and captain Pierre-Emerick Aubameyang was benched, with Nicolas Pépé, Alexandre Lacazette and Reiss Nelson making up the front three.

Liverpool have looked off-kilter since the commencement of Project Restart, with only a 4-0 win over Crystal Palace providing the highlights amid a run of form that has seen them drop points against Manchester City, Everton and Burnley. Given manager Jürgen Klopp’s superb record against the Gunners, this game seemed to be the perfect occasion for the champions to bounce back to form, and a strong line-up was accordingly named.

As usual, Alisson started in goal, with the defense comprising of Trent Alexander-Arnold, Joe Gomez, Virgil van Dijk and Andy Robertson. Fabinho continued as the deep-lying midfielder, flanked on either side by Gini Wijnaldum and Alex Oxlade-Chamberlain. The usual trio of Sadio Mané, Roberto Firmino and Mohamed Salah took their places in attack.

With Tierney as the left center-back, Arteta continued with the 5-2-3 structure that produced results against Southampton. Arsenal started their buildup with three at the back, though it was slightly unorthodox in terms of how it unfolded.

With Tierney positioned wide and Saka remaining deep to receive the pass, Salah was forced to adjust his position to effectively press both Luiz and Tierney. Often, the short pass from Emiliano Martinez to Luiz was the trigger for Liverpool to press, with Salah and Firmino quickly closing down the defender.

However, Tierney’s position meant he provided an outlet to Luiz when the latter was pressured, and the center-back in turn had Saka ready to receive and turn with the ball. With Oxlade-Chamberlain marking Xhaka closely, it was up to Alexander-Arnold to advance and press Saka, and it is a credit to the strength of Liverpool’s game plan that Xhaka was able to turn his marker just once in the entire first half. 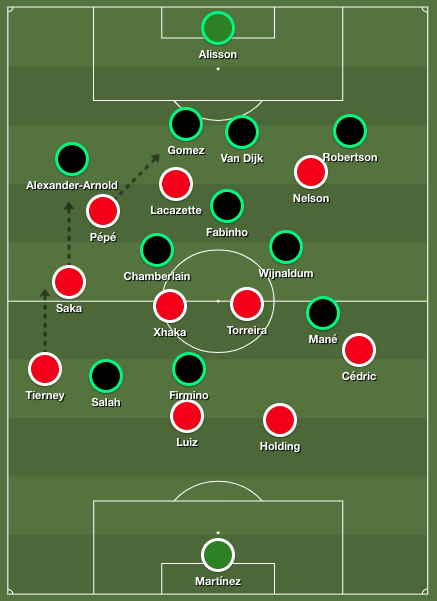 Arsenal’s attacking set-up. The home side was severely lacking in dynamism or creativity in the final third.

This became a common sight, as Liverpool continually trapped Arsenal out wide and recovered possession to restart attacks. The home side was rarely able to bring the front three into play, which made for little dynamism even when Arteta’s side did manage to string passes together.

However, there were still a few impressive moments in possession by Arsenal, particularly when Xhaka got on the ball and was able to benefit from the positional rotation between Saka and Pépé.

Saka moving into the halfspace generally saw him drag Alexander-Arnold inside, whereas Gomez had to go wide to track the run of Pépé on the left. Further, Torreira would also move to the left to disrupt Liverpool’s press and recover second balls. These movements saw Arsenal progress the ball at least into the opposition half, but resulted in little else.

Arteta tweaks the buildup but Arsenal fail to advance

With Liverpool pressing with their usual ferocity, Arteta tweaked the buildup after the drinking break. Now, Arsenal built with Luiz and Holding on the ball, with Tierney advancing while Xhaka and Torreira dropped deeper than they had before. This forced Salah to hold his run to press Luiz, with Xhaka being able to receive in more space and Saka making supporting movements to give the midfielder more time on the ball.

Further, Lacazette remained in his false nine role, dropping into midfield from the forward line to play passes into the wingers from deep. These tweaks theoretically should have resulted in better progression structure for Arsenal, but long balls to the forwards were easily snuffed out by the towering Liverpool defense.

Liverpool errors give Arsenal the lead

The Premier League champions looked in control of the game, and they carved open the Arsenal defense after Firmino fed the overlapping When a wide player, most of the times a wing-back, runs outside to fill in the space left by a winger going inside with or without the ball, this is called overlapping. Robertson for a low cross into the box. The resulting ball was met perfectly by Mané, who made a precise run between Xhaka and Torreira to score at the near post and put Liverpool up after twenty minutes.

However, not everything was perfect for the champions, with Oxlade-Chamberlain disrupting Liverpool’s usual flow on the right. Whereas Jordan Henderson usually moves wide to allow Alexander-Arnold to come inside, Oxlade-Chamberlain maintained his position in the halfspace, which inhibited the right back’s usually free movement and forced Salah to play a more central role. In any case, Tierney’ had a slightly easier task dealing with Salah on the left, as Mané proved more problematic for Arteta’s side. 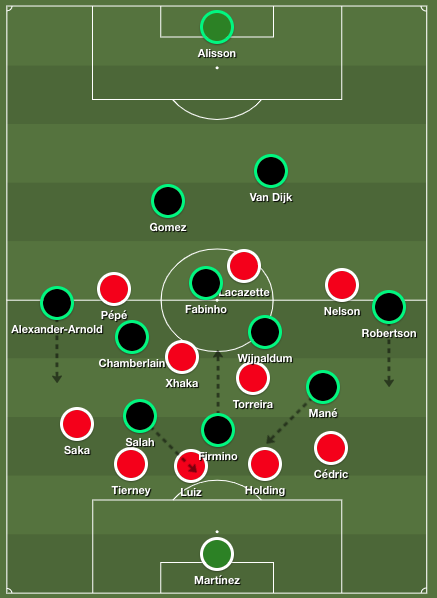 Throughout the first half, Arsenal had focused on pressing the Liverpool defense, with Lacazette marking Fabinho and the wingers trying to pounce on the passes made by the center-backs.

Arsenal set themselves in a 5-2-3 shape off the ball, though it could also become an asymmetric 4-3-3 formation with an emphasis on closing down Alexander-Arnold and preventing the switch from right to left. Further, Wijnaldum and Oxlade-Chamberlain were closely marked by Torreira and Xhaka, which congested the center and forced Liverpool to play down the flanks.

However, the engagement from the forwards proved successful, as Lacazette was on hand to exploit critical lapses on the part of van Dijk and Alisson. From the van Dijk error, the striker was able to round Alisson and dispatch the ball into the net for the equaliser. Next, the misplaced pass from Alisson saw the striker gain possession on the right, from where he crossed for Nelson, who put the home side ahead with an emphatic strike.

Liverpool ascendant but fail to convert second half chances

The visitors started the second half with renewed motivation, but Salah failed to convert the few chances that fell to him in the initial period. With Oxlade-Chamberlain ineffective in midfield, Mané began to take over the creative duties as he dropped deeper in the halfspace to receive the ball from Wijnaldum and kickstart Liverpool’s possession play.

Liverpool changed their structure soon after, as Naby Keïta and Takumi Minamino came on to prompt a change to a loose 4-2-3-1 structure. While Keïta and Fabinho nominally formed the double pivot, the Brazilian dropped on to either side of the center-backs to form a back three with Wijnaldum and Keïta alternating between the deeper role. This caused problems for Arsenal, who now found themselves evenly matched with the Liverpool defense and therefore were susceptible to being carved open by Keïta in the middle.

The rest of the half proceeded in a routine manner, with Liverpool trying to carve open Arsenal through Keïta’s creativity in the middle and the usual switch of play. However, the home side held firm, with the introductions of Joe Willock and Dani Ceballos early in the second half shoring up the midfield for Arteta’s side. Despite Liverpool racking up the shot count – ending with 24 shots compared to Arsenal’s 3 – no more goal was scored, as goalkeeper Martínez did well to save a last-minute effort from Alexander-Arnold. 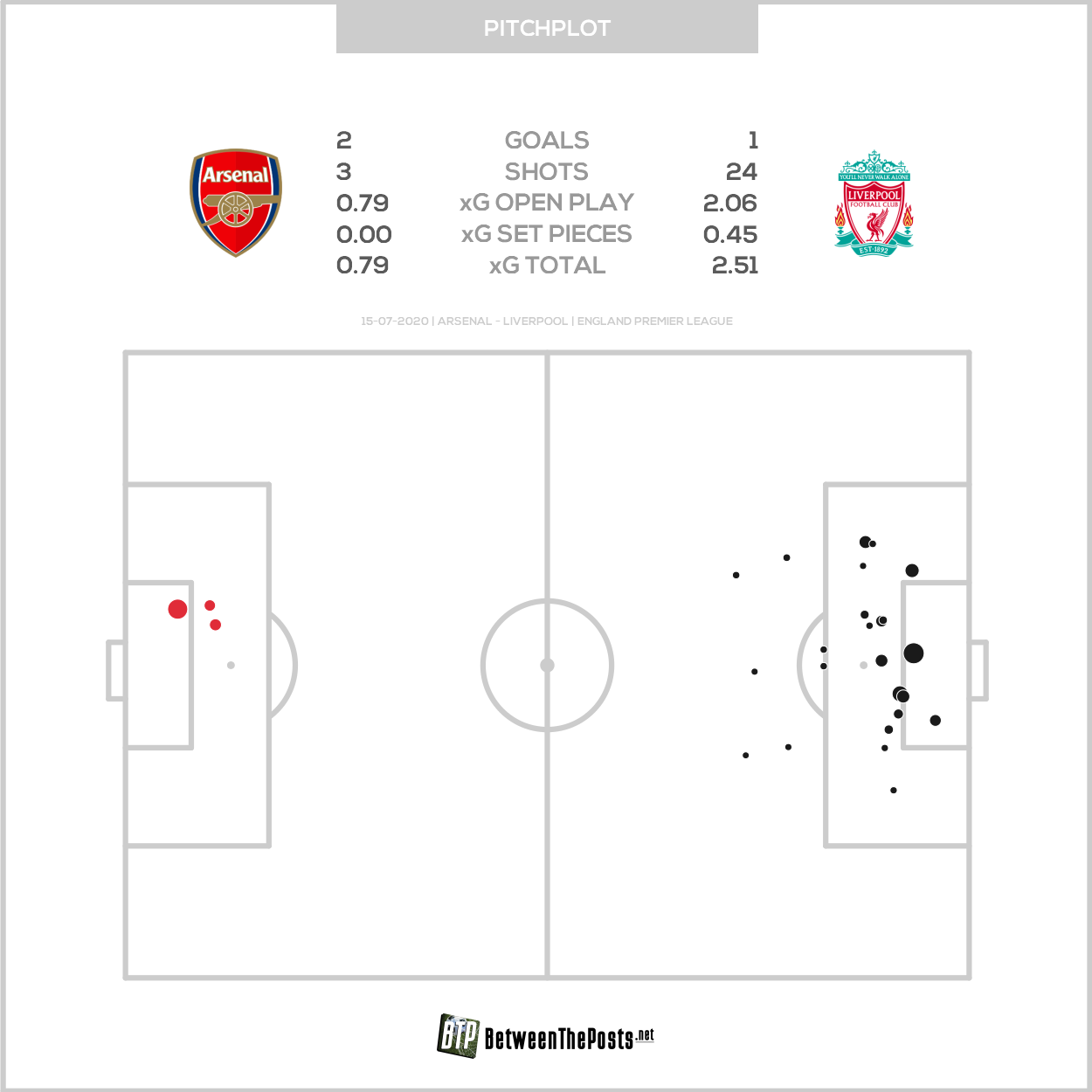 This was nothing more than a smash and grab victory for Arsenal, who lacked spark in the final third but did well to exploit Liverpool’s mistakes. As Arteta made clear after the game, the Gunners need reinforcements if they are to compete, though it is the FA Cup semi-final against City that looms as the season-defining game for the side.

This defeat does nothing to detract from Liverpool’s historic campaign, though it does mean that they will fail to overhaul City’s record 100-point total from the 2017/18 season. The past two games will have served as a warning to Klopp over the championship hangover that his team has to surmount next season, but with the mission accomplished, Liverpool can afford to put their feet up for the rest of the season. 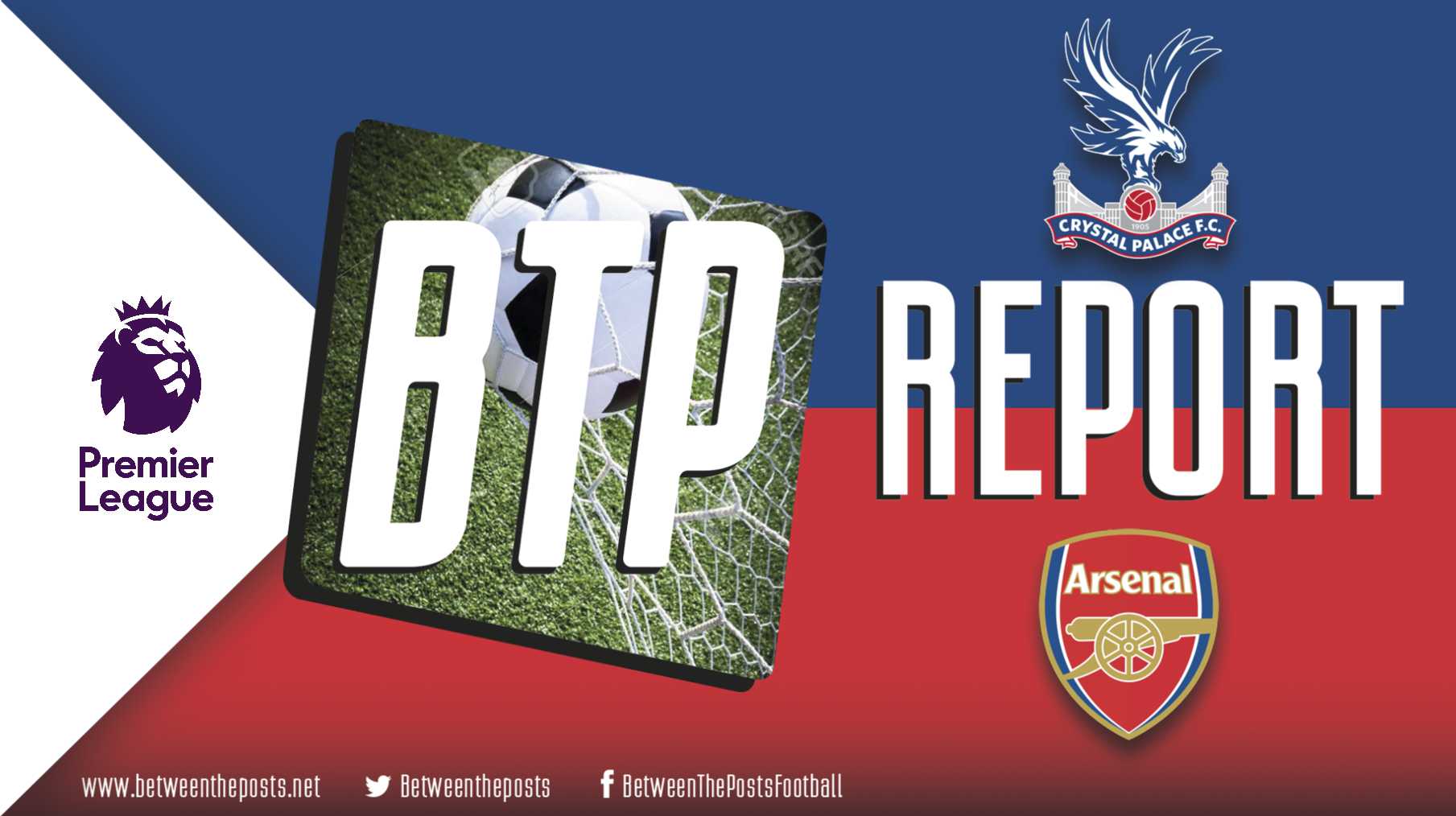 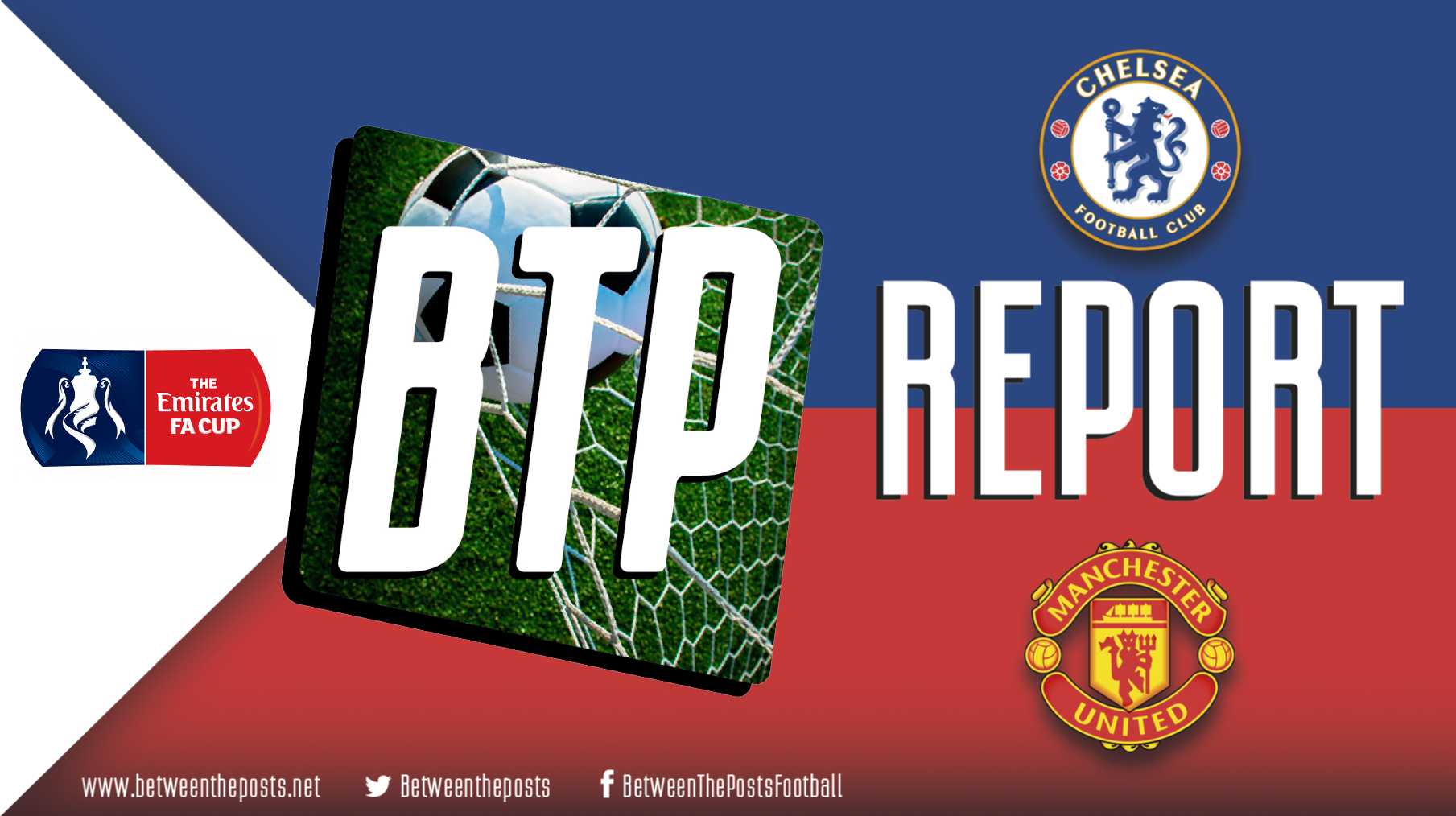