Rolling back the years in their fight to finish in the top four, amid their latest growth spurt, Arsenal relished the visit of Liverpool as a stern trial of their credentials. The visitors were slow to find their rhythm before half time, but tinkering from the dugout was too much to handle.

Who were we all to distrust the process in the red half of North London? Ever under the cosh, Mikel Arteta has overseen gradual growth at Arsenal. A five match winning streak in the Premier League, the joint longest in his reign, has cemented the club’s spot in the top four. What’s more, three games in the bank on most of the chasing pack has built up a cushion that puts qualification for the Champions League in their hands. However, the test of their progression would be a clash with one of the elite.

Back to their best under Jürgen Klopp, Liverpool have made inroads on all fronts in their pursuit of silverware. In the last eight of the Champions League and winners of the Carabao Cup, such relentless form has thwarted Manchester City’s prospects of cantering to yet another league title. Their eight game winning streak in 2022 has cut down the gap at the top of the table to a mere four points ahead of kickoff. A victory here drags them onto the coattails of the leaders, tightening the race even more.

Arteta set up his men in their usual 4-2-3-1 system. Aware of the confidence brimming through the squad, he made no changes to the starting eleven that coasted to a 2-0 win over Leicester City last time out. In the absence of Takehiro Tomiyasu, missing thanks to another calf injury, Cédric Soares deputized on the right of the back four. Thomas Partey and Martin Ødegaard were keen to keep up their strong form in the middle of the park, while Alexandre Lacazette led the line as the lone striker.

From the other dugout, Klopp likewise went for his standard 4-3-3 shape. He made two alterations to the team that bagged three points on the road at Brighton. Naby Keïta dropped to the bench in place of Thiago Alcântara on the left of the trident in midfield. But the primary absentee was in the frontline: off the back of a 20th league goal this season, Mohamed Salah picked up a foot injury. Hence, Sadio Mané filled in on the right wing, Luis Díaz stayed on the left, and Diogo Jota played down the middle.

Arteta’s imprint on Arsenal has taken new guises over time. A static double pivot and asymmetric back four was the basis of their play on the ball in the opening stages of the season. In the new year, the tactical blueprint has slowly become broader, as greater fluidity has defined development in 2022.

True to form, Liverpool pressed in a 4-3-3 shape, seeking to keep the ball in a controlled central block. Jota blocked access into the path of Thomas Partey, the wingers trapped the play inside, and the central midfielders to either side of Fabinho shielded options in front of their back four.

Arteta has not swung this tactical battle in his favor this campaign, and the hosts struggled to crack Liverpool’s stability. The higher position of Xhaka in the left halfspace pinned the midfield, giving Partey time to face the play. But moving possession behind Fabinho was a thornier task. Long balls to the channels where the wingers operated were the clearest way forward, translating into few shots.

Liverpool lackadaisical in the final third

Off the ball, Arsenal’s 4-2-3-1 formation showed familiar patterns. High up the pitch, they relied on an asymmetric system. Ødegaard kept an eye on Fabinho while Lacazette moved out from the front to cover Joël Matip to the right of Liverpool’s buildup. Gabriel Martinelli then stayed deeper, tracking right back Trent Alexander-Arnold. On the other hand, Bukayo Saka tucked in from the other flank.

The right winger mainly looked to run at Virgil van Dijk in an arcuate manner, closing off the passing lane to Andy Robertson. Cédric then lurked in a high position to the outside of Saka, ready to chase the fullback if he got the ball. This asymmetry between wide men also manifested in a medium block.

Cédric often stood out wide on the right flank, eager to force the first touch of Díaz away from the goal. Conversely, Martinelli dropped off on the left in an attempt to cover the forays of Alexander-Arnold. The visitors faced a similar riddle in previous duels, so how quickly would they adapt? 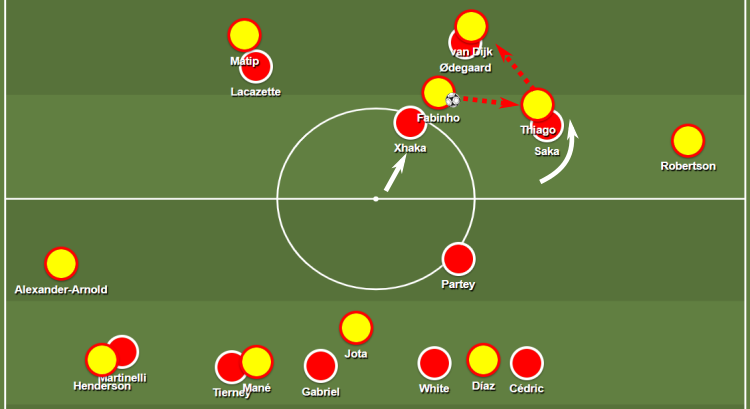 7th minute: pressing sequence from Arsenal. A backpass from Robertson to van Dijk is a trigger for Ødegaard to press. Behind him, Xhaka jumps forward to mark Fabinho, and Lacazette moves out to the left to cover Matip. Saka, narrower and higher than Martinelli on the right, then shifts to Thiago before covering the outward access to Robertson, forcing the play back again to van Dijk.

Klopp’s men modified their buildup structure to break the press. Robertson stayed deep on the left flank to separate from Cédric, and Thiago then dropped off next to Fabinho, forming a double pivot. But, as soon as they faced Arsenal’s medium block, solutions were not forthcoming. Mané blazed over the bar on the stroke of half time, but a marginal goal threat before the break required adjustments.

🗣️"We made a few mistakes... in our possession spells we didn't really create because we didn't have enough bodies between the lines."

Jurgen Klopp shares his thoughts on a game of two halves for #LFC against Arsenal ⚔️ pic.twitter.com/cu6Pk69yxj

Nearly immediately, Liverpool showed how they could crack Arsenal’s defensive shape. Halfspace overloads and coordinated runs in the front three let Jota face forward on receiving the ball. Mané’s offside goal in 60 seconds of the restart was a warning signal, but the home team did not heed caution.

Thiago picked up the ball deep in the left halfspace, threading a pass into the path of Jota. Since Mané drew White towards the center, Jota could then break into the box, striking at goal. Aaron Ramsdale dived right to parry the effort, but his palm failed to keep the ball out of the net. 1-0 after 54 minutes.

Mane and Jota are so good at creating space for each other. https://t.co/lmy55QN2BH

To make matters worse for Arsenal, Klopp made a double substitution. Roberto Firmino replaced Jota as the central forward, Salah took his spot on the right wing, and Mané went to the left. The switches soon paid off. A passage of play from a throw-in saw Salah force White to clear the ball off the line. Robertson duly followed up, charging down a clearance from Saka to race into the box. The fullback’s cross found Firmino, whose impudent flick trickled doubled Liverpool’s lead just past the hour mark.

Perhaps the chief change Liverpool made was in their work off the ball. Fresh legs from the front, and the apt coverage of Firmino, limited the number of ball receptions from which Partey profited after the break. Front foot defending gave the fullbacks more license to stop progression with the wide men. Arsenal’s brightest threat was Martinelli, an outlet from switches in 1-on-1 duels with Alexander-Arnold. Yet, the away team were attentive in the box, culling faint hopes of a comeback. 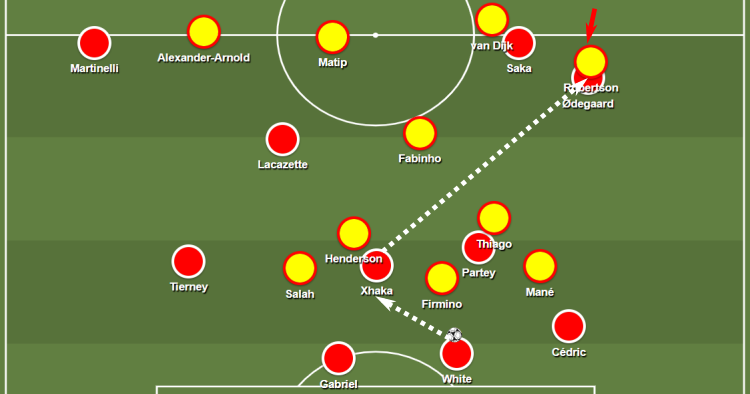 66th minute: pressing sequence from Liverpool. Firmino initially screens the central passing lane into Partey, while Mané closes down Cédric to force the ball circulation centrally back into White. The central defender finds Xhaka, who then clips the play to Ødegaard. Note the height of the defensive block, as well as the aggression of Robertson’s pressing movement to generate an interception.

Emile Smith Rowe, Nicolas Pépé, and Eddie Nketiah featured off the bench, but the changes were futile. The final whistle affirmed a ninth win on the spin for Liverpool: their momentum continues.

Not for the first time in the 2021/22 campaign, Arsenal’s clash with a member of England’s top three was a sharp reality check. Though a return to the Champions League after a five year hiatus has become a burning ambition, their growth, especially off the ball, has a long way to go. Getting the show back on the road at Aston Villa will be crucial in the immediate term to reach fourth spot.

This match was another case where Liverpool racked up three points without a vintage performance. The deepening of the squad has facilitated a uniquely competitive edge on all four fronts. Yet, Klopp’s work should not go without credit, finetuning the back four in the new year. Wary of the discourse of a race with Manchester City, he has quietly brought his men into contention. The Kopites march on. 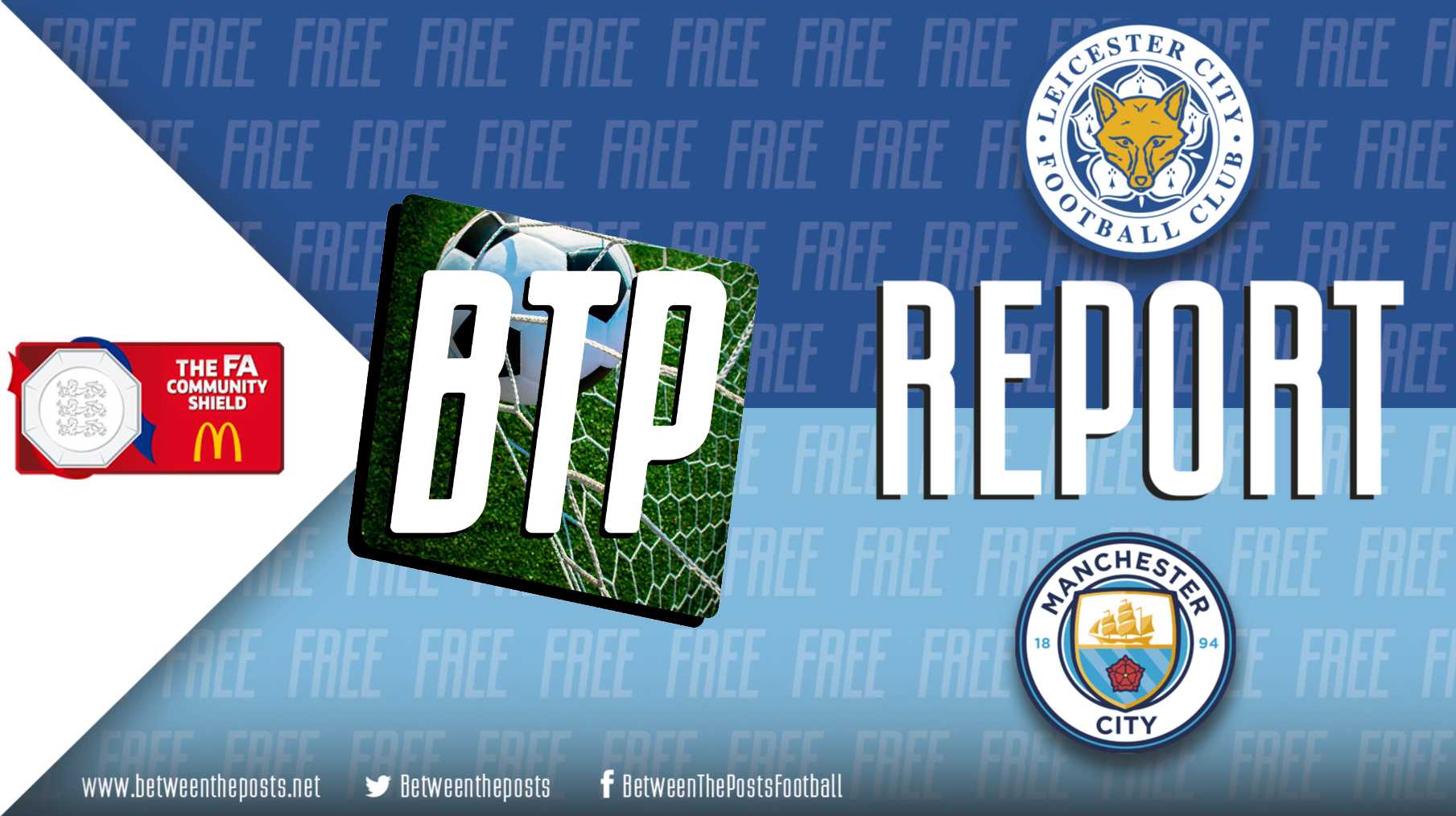 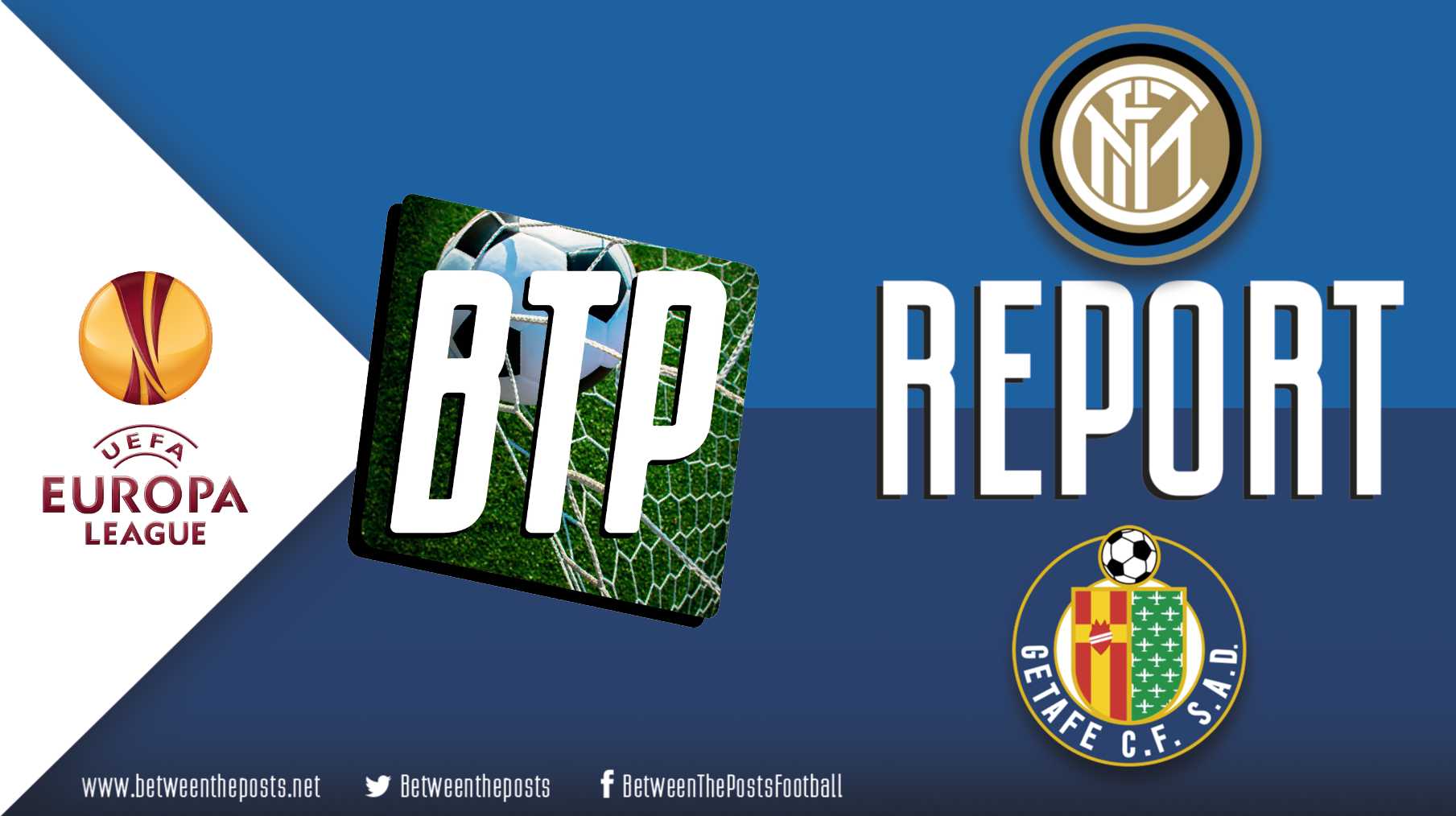 Internazionale – Getafe: Bastoni And Lukaku Lead Inter To The Next Round As Getafe Miss Their Chances (2-0)