Arsenal’s dominant home display has left Napoli on the brink of a quarter final exit, but where did it all go wrong for the Italians? Arguably, this might have been an incidental clash of systems that prevented Carlo Ancelotti’s side from fully exploiting the weaknesses they saw in this Arsenal side.

With every passing week, the pressure placed upon Emery and his team grows and grows. Still in the midst of the battle for a place in the Premier League top four and also the Europa League could provide a path back into the elite club competition. With this in mind, Emery made five changes to the weakened side that lost away to Everton 1-0, albeit sticking with the back-three. These changes included long-awaited and crucial returns for the likes of Pierre-Emerick Aubameyang, Aaron Ramsey, Lucas Torreira, Laurent Koscielny and Petr Čech.

Napoli are in relative comfort in their firmly-held second-placed position in Serie A. However, that is not to suggest Ancelotti believes his side should put the emphasis on domestic football. His intent was more than a little evident in his team selection alone; bringing Lorenzo Insigne back in having only featured as a substitute in Napoli’s 1-1 draw at home to Genoa on Sunday. Elsewhere, Mário Rui came back in for Faouzi Ghoulam and Alex Meret replaced Orestis Karnezis between the sticks.

As part of Ancelotti’s defense, using an aggressive 4-4-2 press, forwards Dries Mertens and Insigne would frequently push onto the ball-near center-backs, leaving the far-sided one free and out of reach. Just as the far-sided midfielder in that case would step up to join a three, the central midfield structure was equally malleable. Allan and Fabián Ruiz were willing to split at any given moment so that they could apply pressure to any central receiver. Here, though, is where Özil thrived. Even when there was still one of the holding midfielders left sitting for Napoli, the German was always an option for the ball-holder, cleverly pulling wider to that side so to be free of his marker and free to exchange passes with. 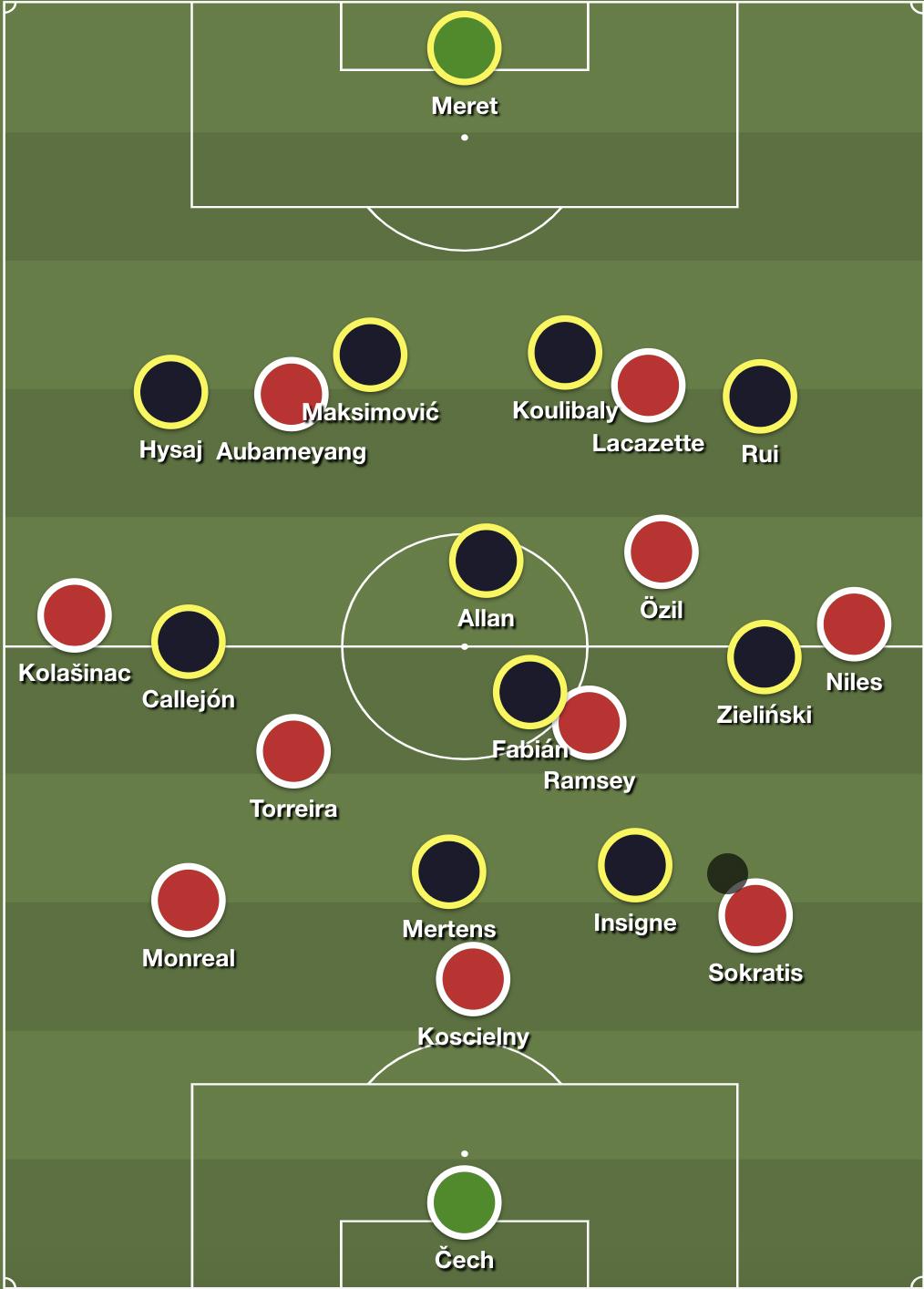 Özil positioning himself wide of the center so to help provide a way out, either directly or indirectly.

Ramsey’s movements in the attack were just as important, if not more so. Gradually pushing higher and higher as the game wore on, the Welshman started deep near Torreira and slowly eased his way up the pitch, contributing constant runs from deep into dangerous areas. Five of Arsenal’s sixteen shots in this match were from Ramsey, with all of his coming inside the eighteen-yard box.

Despite some telling midfield superiorities, then, they were not the beast of Napoli’s problems. Rather, those appeared to be self-inflicted, somewhat incidentally, perhaps. Piotr Zieliński, in Ancelotti’s attacking 4-4-2 system, tends to stay narrow when positioned wide on the left but, here, he was tasked with coming much deeper. In most cases, the visitors could be seen to be playing a very narrow, ball-centered 4-3-3 formation. What appeared not to have been anticipated was that Emery would revert to a 3-4-1-2, meaning Arsenal were given the tools to press man-for-man in an instant. 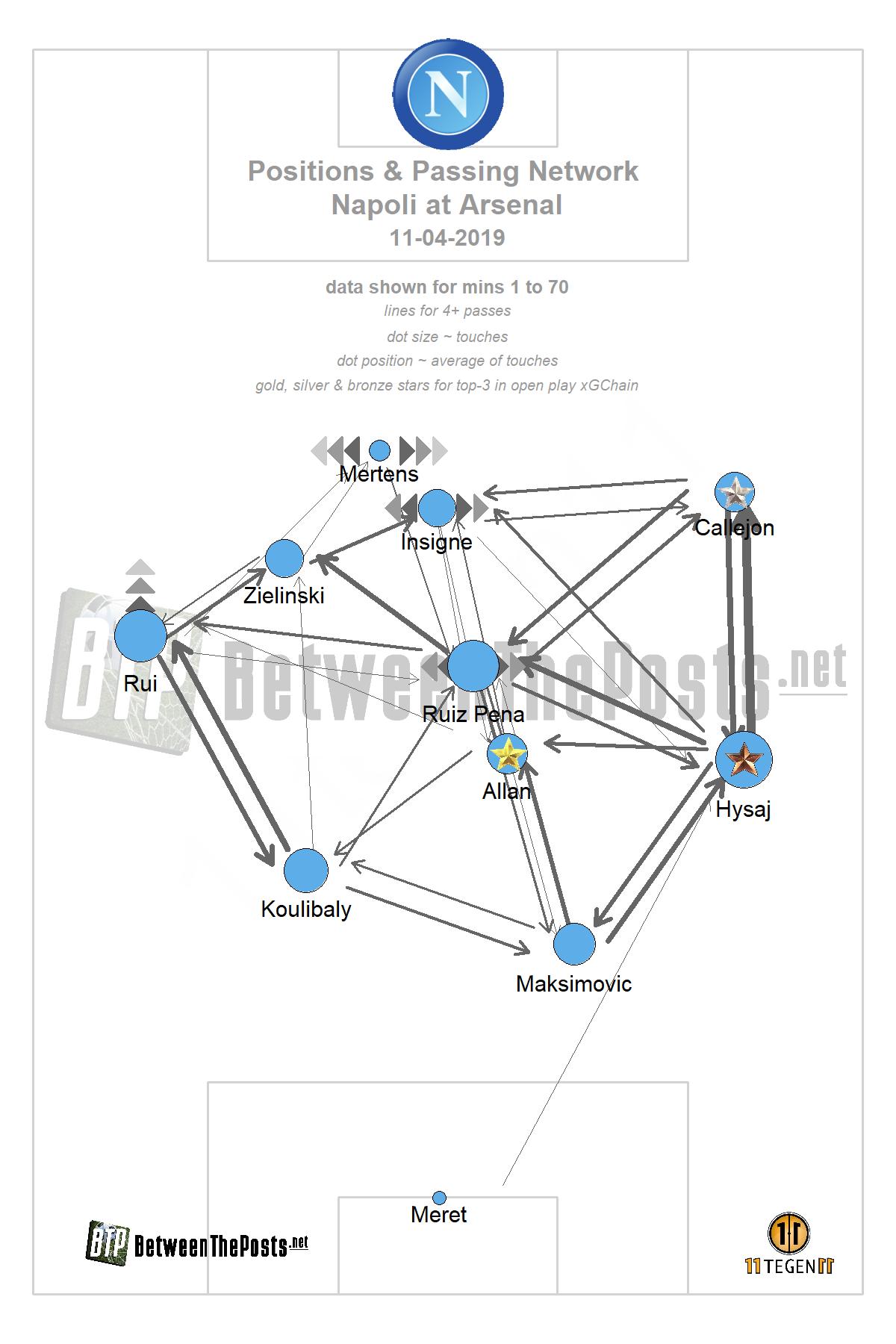 This, as well as their huge lack of composure in possession, completely scuppered their game plan – to get their attackers in behind. A simple attacking target but one that pains Arsenal more than many others.

Rui and José Callejón, for the most part, are two wing-backs making out-to-in runs, timing them well to beat their wing-back markers. In the center, the likes of Insigne and Mertens could afford to be more blatant with their runs towards the right halfspace.

Napoli slow to come up with solutions

The visitors just could not escape the congestion of the Arsenal press and they did not help themselves. In the home side’s skewed 2-1-2 defensive press, they were always likely to be vulnerable to the switch of play, but Napoli never attempted that nearly enough. They always kept it to the right flank, inviting such excruciating pressure. Rui, almost always that far-sided figure, was accessible whilst Zieliński kept Ainsley Maitland-Niles quite narrow.

Due to Napoli’s aforementioned issues, thinking in terms of a mental perspective, it came as no surprise that Arsenal’s big early chances stemmed from such problems.

In the seventh minute, Meret chipped the ball wide to Elseid Hysaj, who appeared jittery when attempting to help it on, and it showed. Losing possession, Özil was quick on the scene to exchange with Sead Kolašinac, who pulled it back for a wide-open Ramsey, but his weaker foot effort was weak. 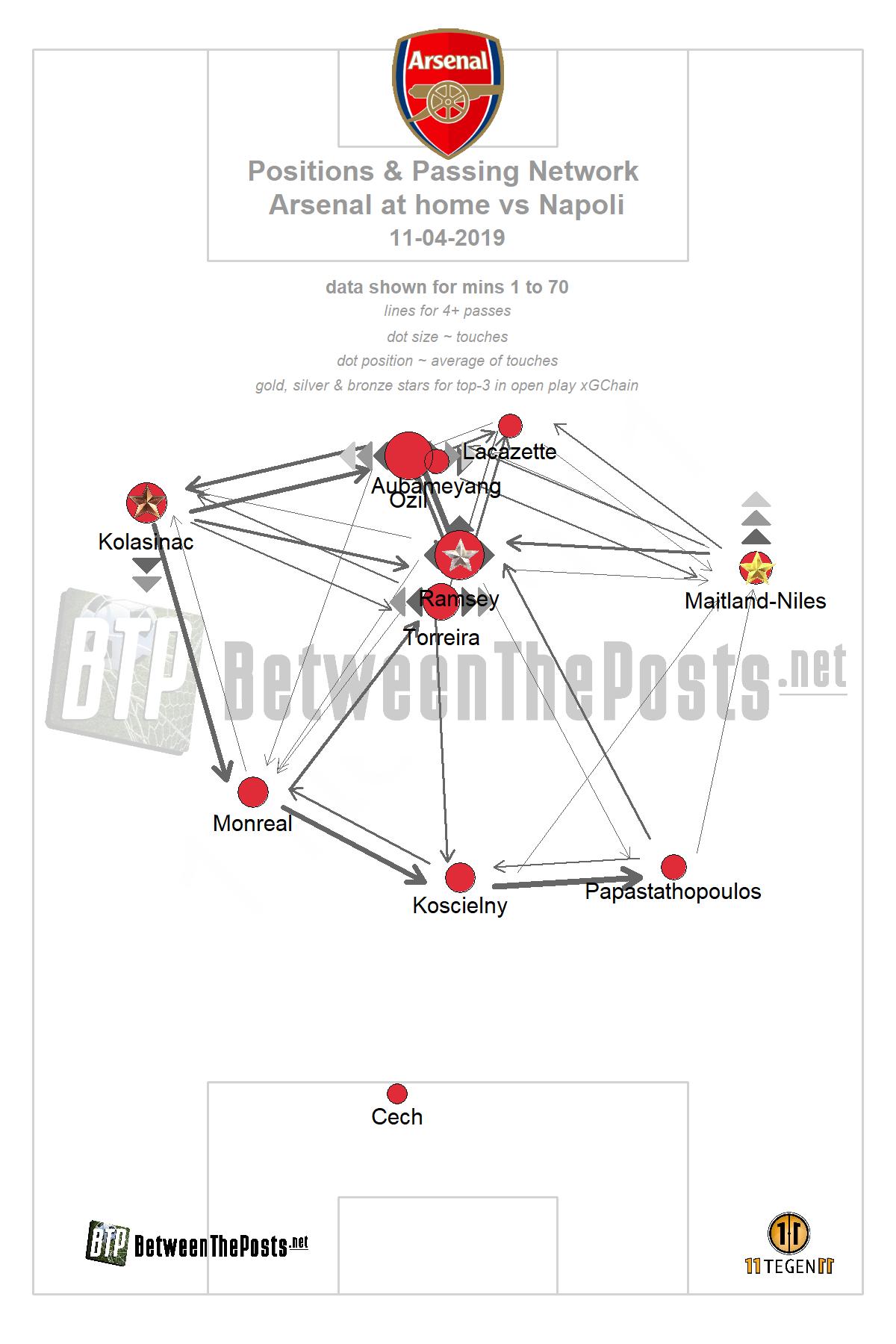 Özil’s impressive game shows in this passmap with so many touches in such an advanced zone.

Then came the opening goal. This time stemming from one of Napoli’s channel ball routines. Rui attempted to swing forward a ball down the inside-left channel but it was once again closed down in time by an Arsenal player – Ramsey just managing to intercept this one. A man-down in this close-by situation, the Arsenal players near the ball swarmed it and had the sparse Napoli midfield instantly outnumbered. Some neat linkup play from Özil, Ramsey and Lacazette eventually saw Maitland-Niles burst into the box. He received Lacazette’s slide ball into his feet before laying it off for Ramsey, who had continued his run from deep (as ever). Fifteen minutes in and Arsenal were in cruise control.

Matters were only made worse short of ten minutes later when the home side got themselves a second goal. Again, all about Napoli’s seeming lack of control in possession. This time, they were knocking it around in a tight spot despite not having recovered their possession setup in any way. Shortly into this, Fabián was caught unaware of Torreira and had no close-by options to resort to, resulting in the Uruguayan having acres of space to charge into. Ignoring Aubameyang, he chopped back inside and misfired his effort from range but, to his delight, the ball took a wicked deflection on its course wide, redirecting it back on target and past Meret.

Napoli’s attack squeezes out a breath

A small glimmer of hope presented itself before the visitors prior to half-time. Here, most of all, was where it seemed that Emery’s 3-4-1-2 formation had not planned for a Napoli 4-3-3. Özil was easily dragged away by Fabián’s run forward, leaving Torreira and Ramsey with men to mark. Finally afforded some time with the ball, Allan made no mistake in playing it over the top for Callejón’s diagonal run. Perfectly timed, the run was. The cutback was not too bad, either, finding Insigne, who blazed his effort – and Napoli’s best chance of the first half – over the bar. 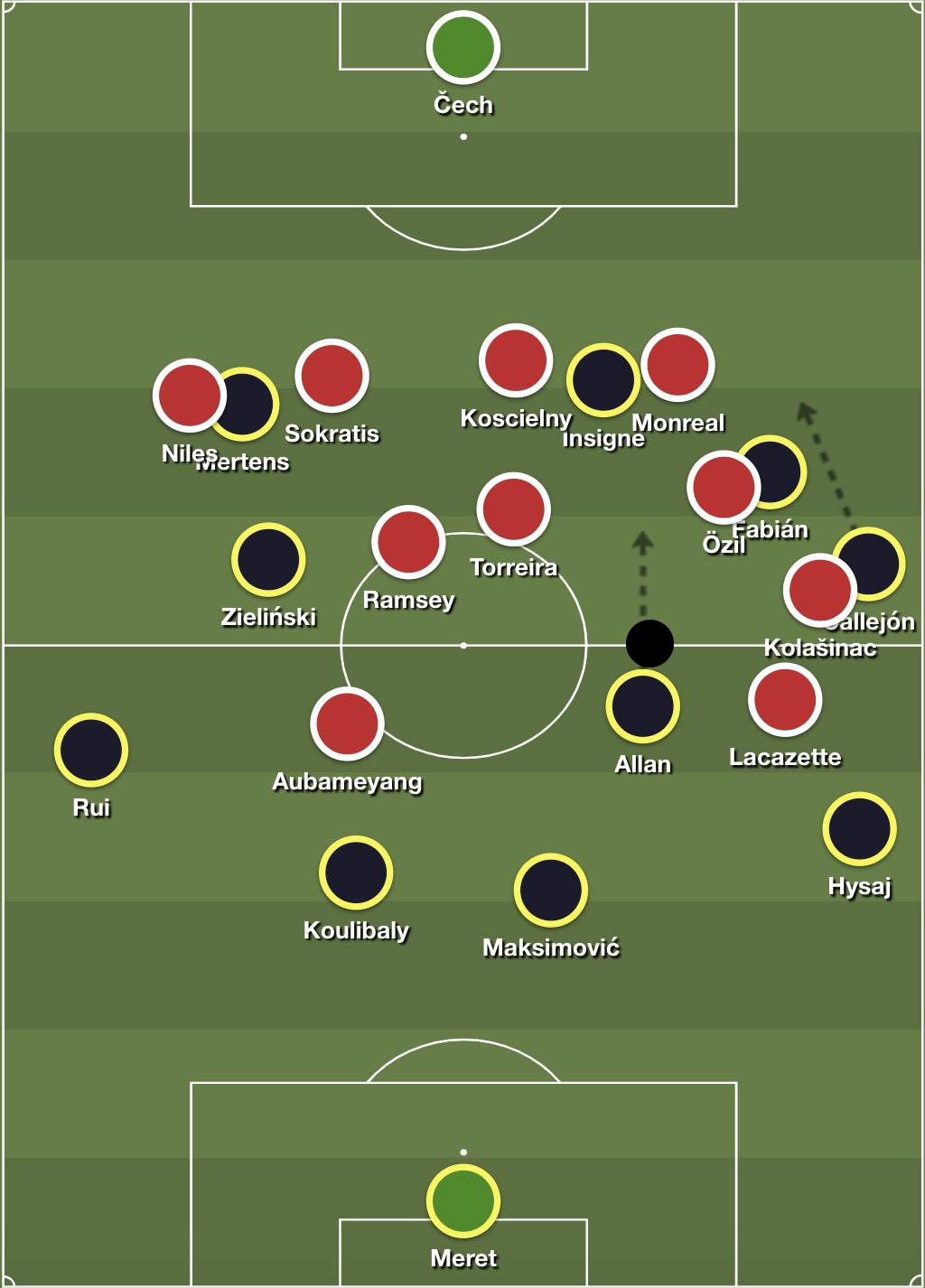 Fabián draws Özil away while the midfield sit off, allowing Allan space to operate.

In the second half, the tide turned back the other way in the away side’s favor. This was not without an alteration or two. Positionally-speaking, Zieliński was instructed to return to the normal limitations of his inside-left-midfielder role, and it paid off. The Polish midfielder’s positioning was causing a conundrum for Maitland-Niles. He was now preventing him from being able to stick tighter to Rui. This also meant he was certainly free for more switches of play, which they sent more of his way in the second half.

But for all the subtle developments, Arsenal were pushing counterattack after counterattack. Playing straight, powerful, lofted balls in behind and trying little else is not very effective.

Just before the seventieth-minute mark, Emery substituted on Alex Iwobi and Henrikh Mkhitaryan. It was sensible. Two hard-working players that would work back and help cover each wide section more aggressively. What came with the tweak was a significant change in shape, now moving to a 5-4-1. This gave the center-backs of Napoli so much more time to use the ball and it also provided Napoli with ways to play out of pressure.

Subsequently, players had more time to set up their next move and attempt these balls over the top. For a good while, Napoli’s luck was still out… until the seventy-second minute. Having eased their way out of a tight spot of pressure, Hysaj swung a ball through, to the side of Insigne down the inside channel. First time across from Insigne to find Zieliński but his first-time attempt, sliding with his stronger foot was poorly done. Napoli’s best chance to get back in this tie went begging.

What was certainly ever-present in this match was Arsenal’s consistently impressive buildup and linkup play. They were superior in all phases and it showed. In the eightieth minute, Arsenal used the 3-4-3 setup to perfection. Ramsey pushing on, dragging central players away, rotating with Iwobi. Iwobi cut in to find Elneny, who then accessed the overloading attacker – Mkhitaryan. Playing it wide, the Armenian continued by exploiting the channel inside and cutting it back for Ramsey, because, who else? Unfortunately, it was another anti-climactic finish. 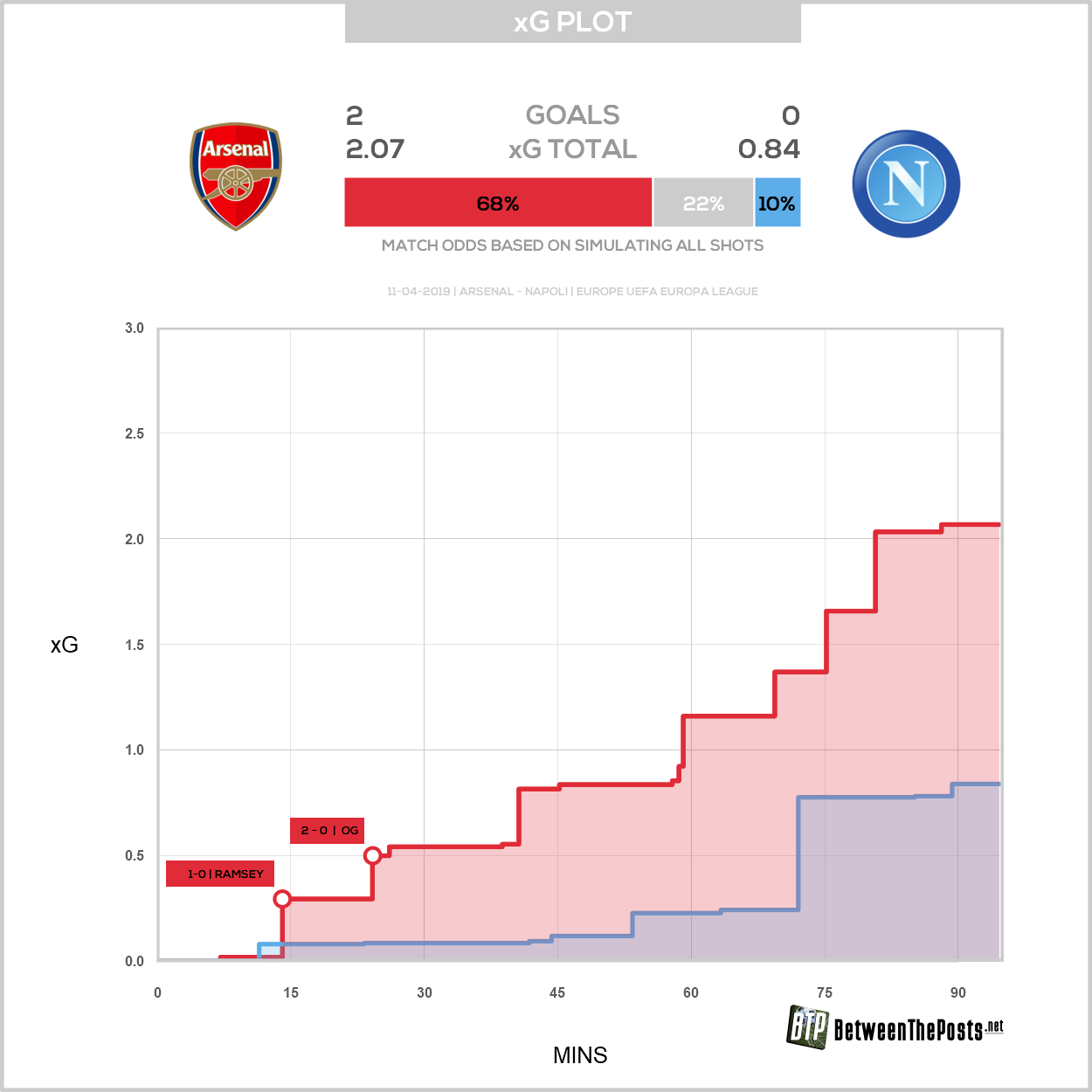 This was a huge result from an Arsenal perspective. Many were likely skeptical about their chances against this Napoli side, especially given how far they pushed Liverpool and PSG in the Champions League group stages. However, it is fair to say Emery’s men overcame them with relative ease in this encounter. Whether they can sustain this level of performance away from home though, come next Thursday, is a different matter entirely, it must be said. 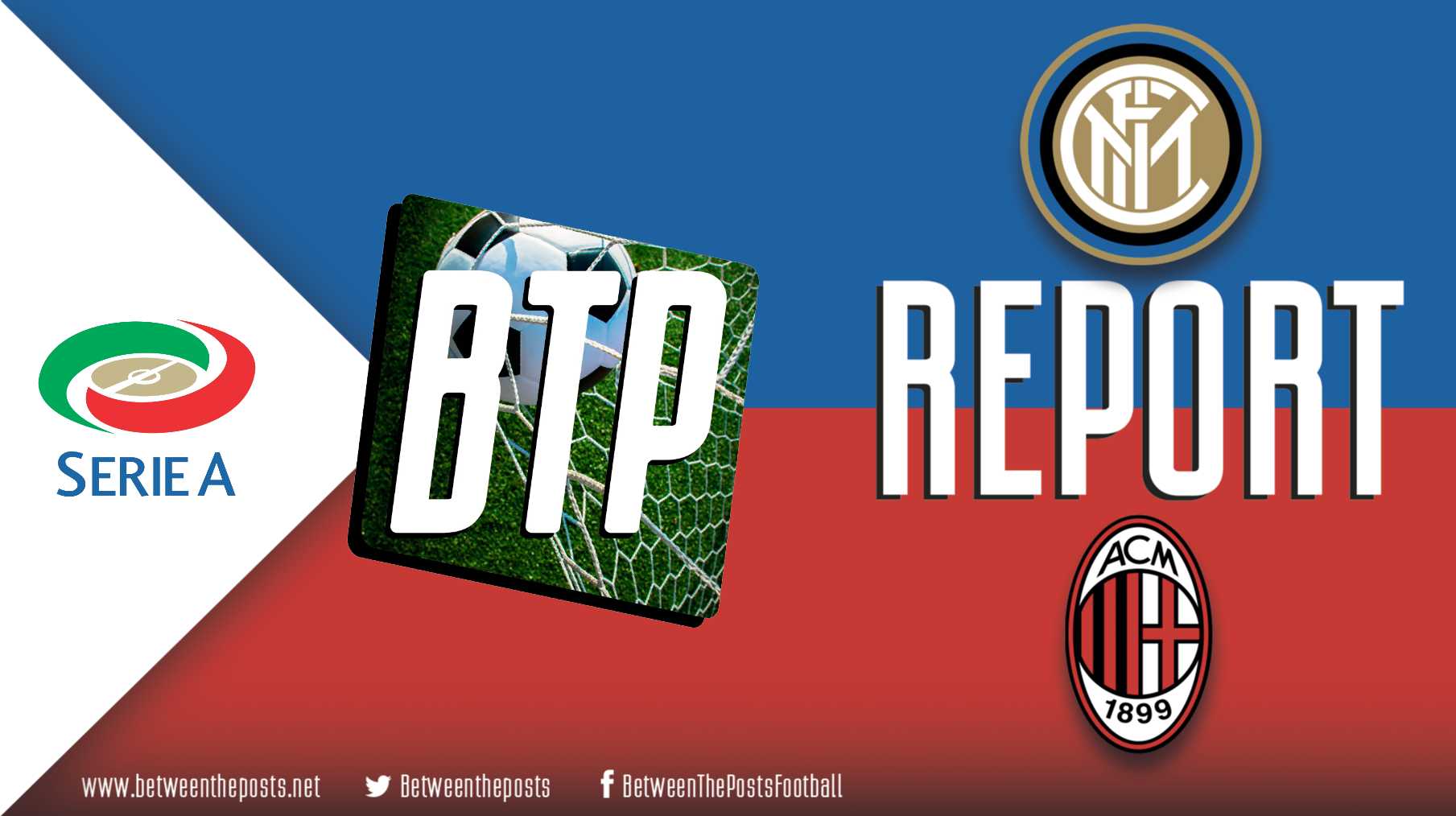 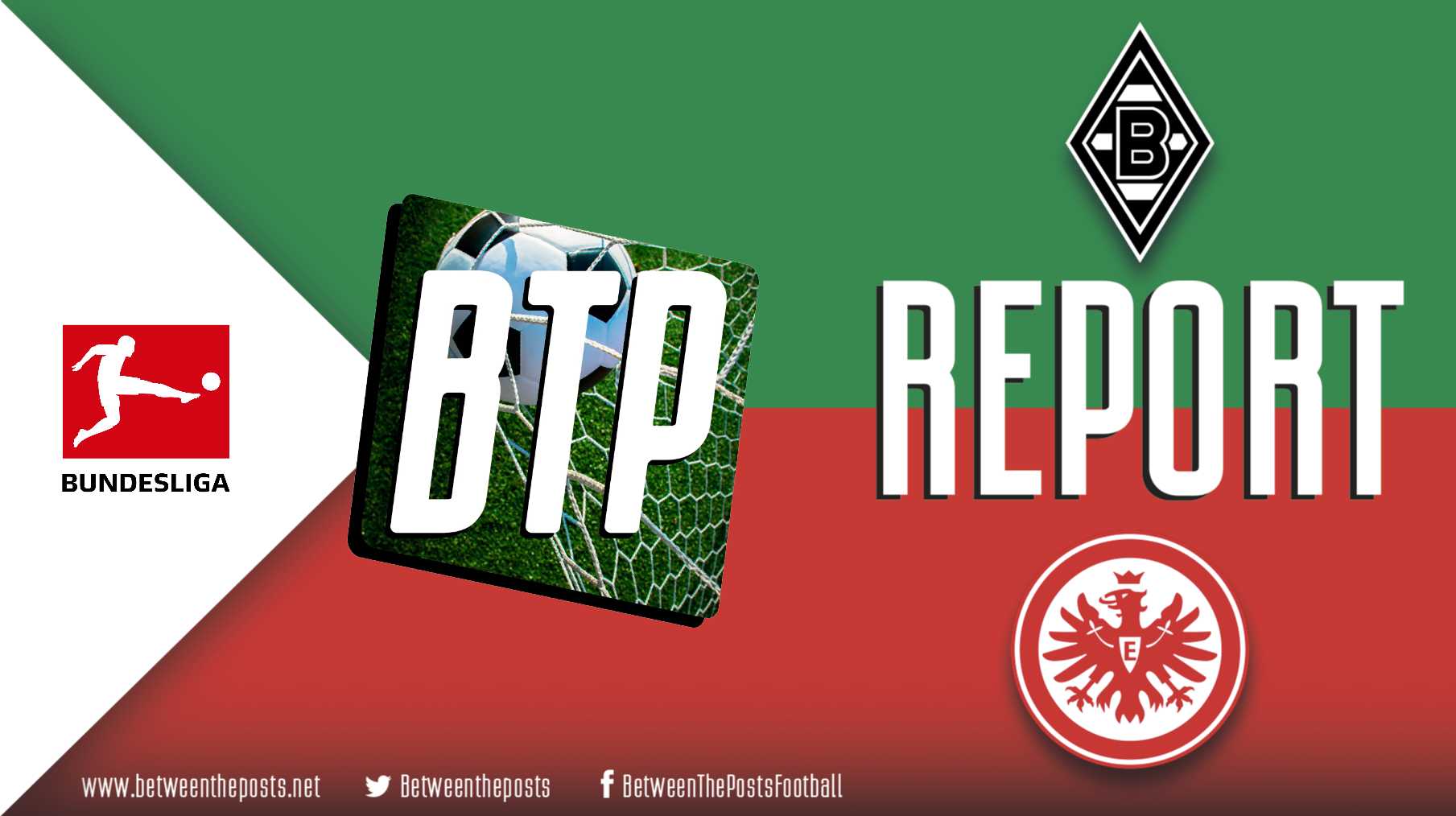