A North London derby between two mediocre sides could have produced a tense affair. Luckily, Arsenal picked the ideal day to deliver a dynamic display. A mix of craft and incision left Spurs trailing in their wake, running riot in the first half hour of the game to take the bragging rights.

Though the two contestants of the North London derby are a mere four miles apart, their proximity in the league standings has only been a thing of the present. Slowly but surely, this fiery clash has gained a true sense of competitiveness, emboldening red and white camps in the capital to call the city their own. An even footing set the tone for this edition, but it has now taken on a far more muted meaning.

Tottenham Hotspur kept three shutouts in their first three games, sitting in first place with nine points. On the other hand, Arsenal sat rock bottom, pointless and scoreless, after losses to Brentford, Chelsea, and Manchester City. But a role reversal over the next two matchdays has shifted the outlook of this contest, leaving the two sides in mid-table. So as contrasting fortunes at the outset of the new year have converged towards mediocrity, which team could save face by taking the bragging rights?

Arsenal manager Mikel Arteta set up his men in a 4-1-4-1 formation. He made just one tweak to the starting eleven that he picked last time out in the league away to Burnley. Granit Xhaka made his first start for nearly a month, operating as a left sided central midfielder. Emile Smith Rowe moved from a more interior role to the left flank, and Bukayo Saka swapped over to the right, leaving Nicolas Pépé short of a spot in the team.

Spurs manager Nuno Espírito Santo went for a 4-3-3 shape, making three changes to the side that lost 3-0 to Chelsea last weekend. Two of these were on the right side of the back four as summer signings Emerson Royal and Cristian Romero would watch their first North London derby on the bench. Japhet Tanganga and Davinson Sánchez took their places, while Lucas Moura joined Harry Kane and Son Heung-Min in the attack.

Nuno’s twist on a familiar formation

Nuno built up a reputation for defensive football at Wolves, so it was no shock to see his men defer control of the ball to the hosts in the opening stages. They adopted a similar setup to the one that saw them beat Manchester City on the opening matchday of the season. This formation was a vertically compact, narrow 4-3-3 block where the midfield and attack were a short distance from each other. 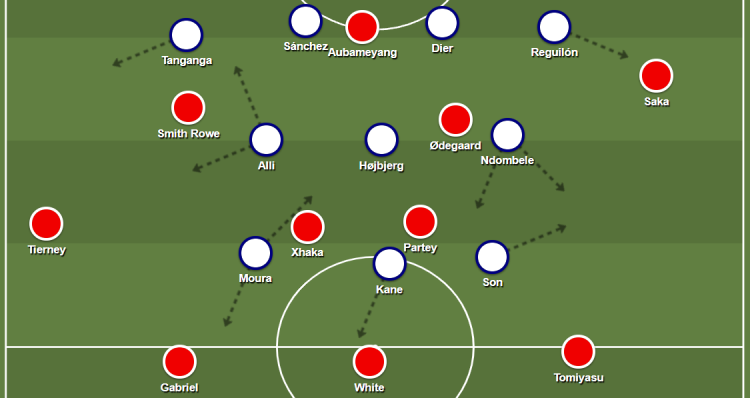 However, both units were very flat. Thus, the three midfielders and three forwards would stand in rows where no player was higher or further back than the other two men in his line of defense. From here, the front three often became even tighter while the midfield three fanned out more. This change became very evident if the ball were on the flank. In this case, the narrow wingers did not drop back to cover the threat, leaving the central midfielder behind him to shuttle wide. The main exception was if the right back drove forward from deep, as Son would diligently track back to close him down.

A goal made in Hale End

Once they worked the ball into the middle third of the pitch, Arsenal played in an offensive structure that has become more of a norm in recent weeks. From the back, the fullbacks operated in asymmetric roles. Takehiro Tomiyasu mainly held the width on the right but stayed in a deeper position. Hence, he formed a back three along with the two central defenders Gabriel and Ben White. On the other hand, Kieran Tierney pushed up higher on the left flank while offering width to threaten in the final third.

The roles of the fullbacks then had a bearing on the positions the wingers took up. Saka stayed wide on the right, whereas Smith Rowe drifted into the left halfspace from the off. Martin Ødegaard shifted over to the right halfspace, while Xhaka and Thomas Partey acted as a double pivot behind these two. 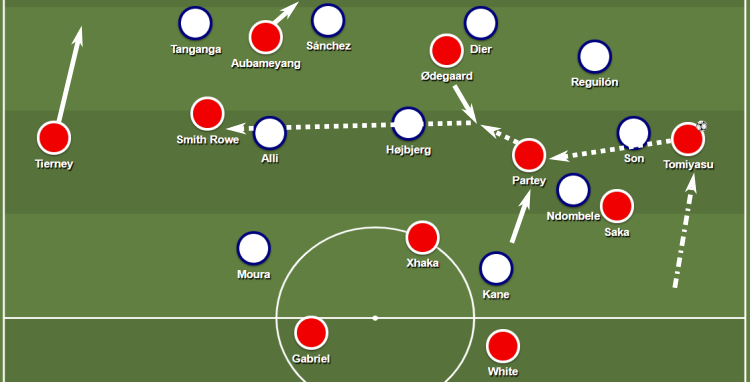 7th minute: Tomiyasu sharply moves wider and higher, forcing Son to track him back a long way. Partey and Ødegaard combine to cut through Spurs’ block switching the play to the far side. Rotations continue on the left, where Aubameyang has drifted wider before making a deep run.

But above all, Arsenal looked bright from the off, taking first blood eleven minutes into the game. After White won an aerial duel, Ødegaard played a pass out to Saka, who drove into the penalty area, teasing at Sergio Reguilón. Smith Rowe then burst towards the edge of the six yard box, reaching the flat cross from his teammate before stroking the ball into the bottom of the net. On derby day of all days, the two starring academy graduates in the squad had linked up to give Arsenal the lead.

However while Arsenal thrived in some aspects, this display was far from perfect. Though they found joy working the play forward in wider zones, passes into Spurs’ front block of six nearly always led to a turnover. The two defensive midfielders failed to offer ideal angles to each other to hold onto the ball while Ødegaard and Smith Rowe often ended up in the cover shadows of white and blue shirts.

Around twenty minutes in, errors in these situations saw the visitors gain more control. The defining aspect of their 4-3-3 offensive shape was Moura’s role. He frequently dropped deep to drive the play forward with his dribbling. Spurs began to threaten, but the hosts soon took the wind out of their sails.

Another buildup sequence from Arsenal almost proved fatal as Aaron Ramsdale sold Xhaka short. Luckily, the midfielder bustled Pierre-Emile Højbjerg out of the way, finding Smith Rowe. Slick passing from the winger, Tierney, and Aubameyang teed up the goal scorer to break into the final third. But rather than go for goal, he returned the favor, cutting the ball back to Aubameyang, whose effort bounced beyond the reach of Hugo Lloris into the net. The Emirates Stadium was in raptures.

Arteta’s men were in the mood to kill off this contest, sealing the deal just seven minutes later. Kane stumbled over the ball just outside Arsenal’s box, inviting the home team to hit their rivals on the break. Looking to atone for his error, he cut out an attempted through ball to Aubameyang, only for Saka to get a second chance at scoring himself. He obliged, putting his side three goals to the good.

Fighting a losing battle, Spurs’ hopes of getting anything out of this game were slim. Nonetheless, Nuno tried to inspire a turnaround, bringing on two players straight after half time. Emerson swapped places with Tanganga while Alli came off in place of Oliver Skipp. A final change in the 70th minute triggered a shift to a 4-2-3-1 setup, where Bryan Gil played as a left winger behind Son and Kane.

With a little over ten minutes left to go, Spurs gained a glimmer of hope. Skipp slipped a pass into Gil, who tried to flick the play onto Reguilón. Tomiyasu denied his first attempt, but the substitute beat Saka to the second ball, leaving Reguilón free behind Arsenal’s back four. His drilled cutback found Son, who fired past Ramsdale, cutting the deficit down to two goals.

To add injury to insult, a freak collision in the buildup to the goal led to Xhaka limping off the pitch with an injury. Albert Sambi Lokonga took his place, while Ainsley Maitland-Niles and Nuno Tavares came on for Saka and Smith Rowe to manage the rest of the game. They would face one final scare. In injury time, a deflected strike from Moura forced Ramsdale to tip the ball onto the post.

North London is red, for now.

While Arteta’s men will revel in this win, they should not get too far ahead of themselves just yet. The tilted back four offers a basis to work from, but areas of weakness in buildup reveal the side has much to improve. Perform at high flying Brighton, and they can show this display was not a flash in the pan.

Across the road, Spurs are in a tricky spot. The 4-3-3 block can be tough to crack, but again they came up short when needing to force the issue. Nuno will hope to bring an end to his team’s winless streak with a victory over Aston Villa next time out. 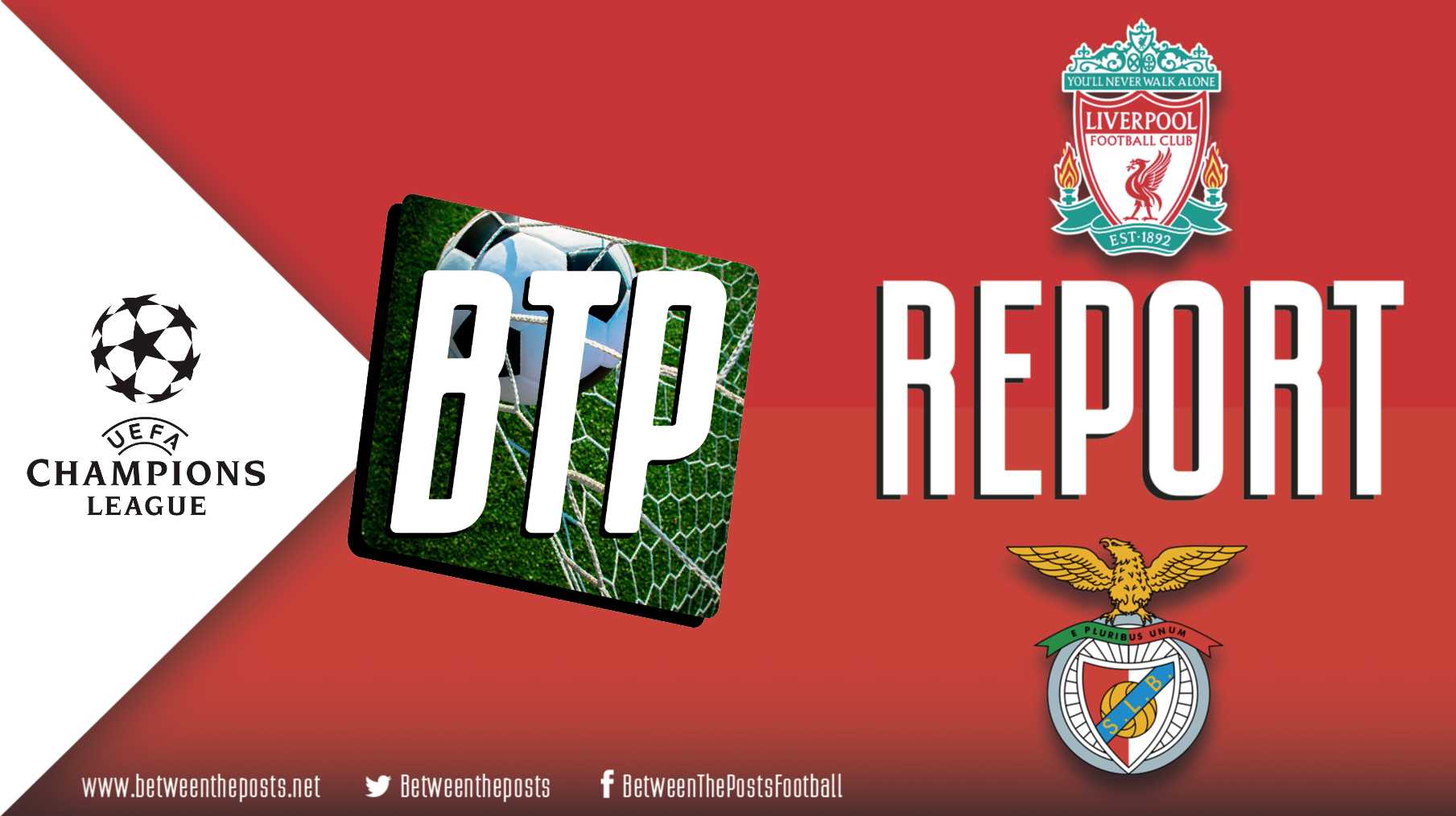