Valencia manager Marcelino surprised by deviating from his usual preferred formation for this Europa League semi-final. Rodrigo Moreno was the focal point of Valencia’s attack in a lineup packed with nominal central defenders. Initially Valencia dominated the home team, but the attacking prowess of Pierre-Emerick Aubameyang and Alexandre Lacazette helped Arsenal seize the day in this hugely bitty encounter.

As the football season reaches its boiling point, it is now that the true grudge matches come to the fore.

Arsenal have suffered through some horrendous form of late, losing three games inside one week, conceding three goals in each of those. From his 4-4-2 setup on Sunday, Unai Emery made just three changes, including a reversion to the 3-4-1-2 formation. Cup-keeper Petr Čech, replaced Bernd Leno while Alex Iwobi and Henrikh Mkhitaryan made way for Laurent Koscielny and Mesut Özil.

Valencia’s surprise defeat at the hands of SD Eibar on Sunday might also have unsettled the camp on the opposite side as Marcelino made a number of defensive changes. To begin with, up till the moment of kickoff it was unclear just what system the manager might field given there were six defenders listed on the team sheet. As it turned out, Marcelino had actually opted for a 5-3-2 formation, which featured Mouctar Diakhaby in the holding midfield position. The eleven also saw returns for Ezequiel Garay, Cristiano Piccini and Carlos Soler. 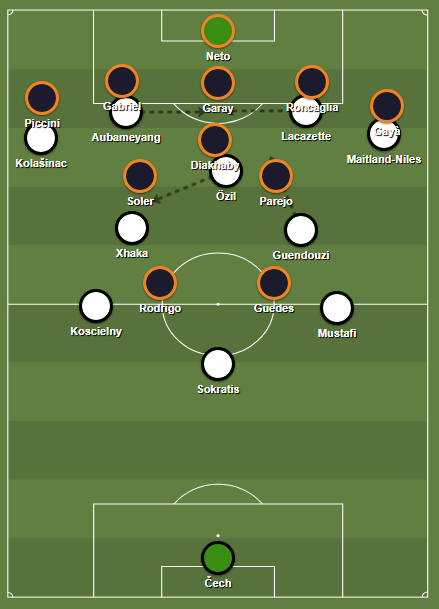 The starting lineups of each side.

To nobody’s shock, Arsenal were handed the lion share of possession early on. This Valencia side were happy to sit back and soak up pressure, but trusted themselves to do so successfully. Their compactness was impressive, especially from the front.

The two strikers, Rodrigo and Gonçalo Guedes, did their bit to close the space between them and midfield, thus setting up a trap for any player who attempted to dribble through there. Additionally, the compactness of this 3-2 shape, which shifted heavily to the ball-side, was well positioned to block off easy passes across. By forcing Arsenal to play it back and around in order to reach the other side, Valencia had plenty of time to shift across and keep the most dangerous areas blocked off. 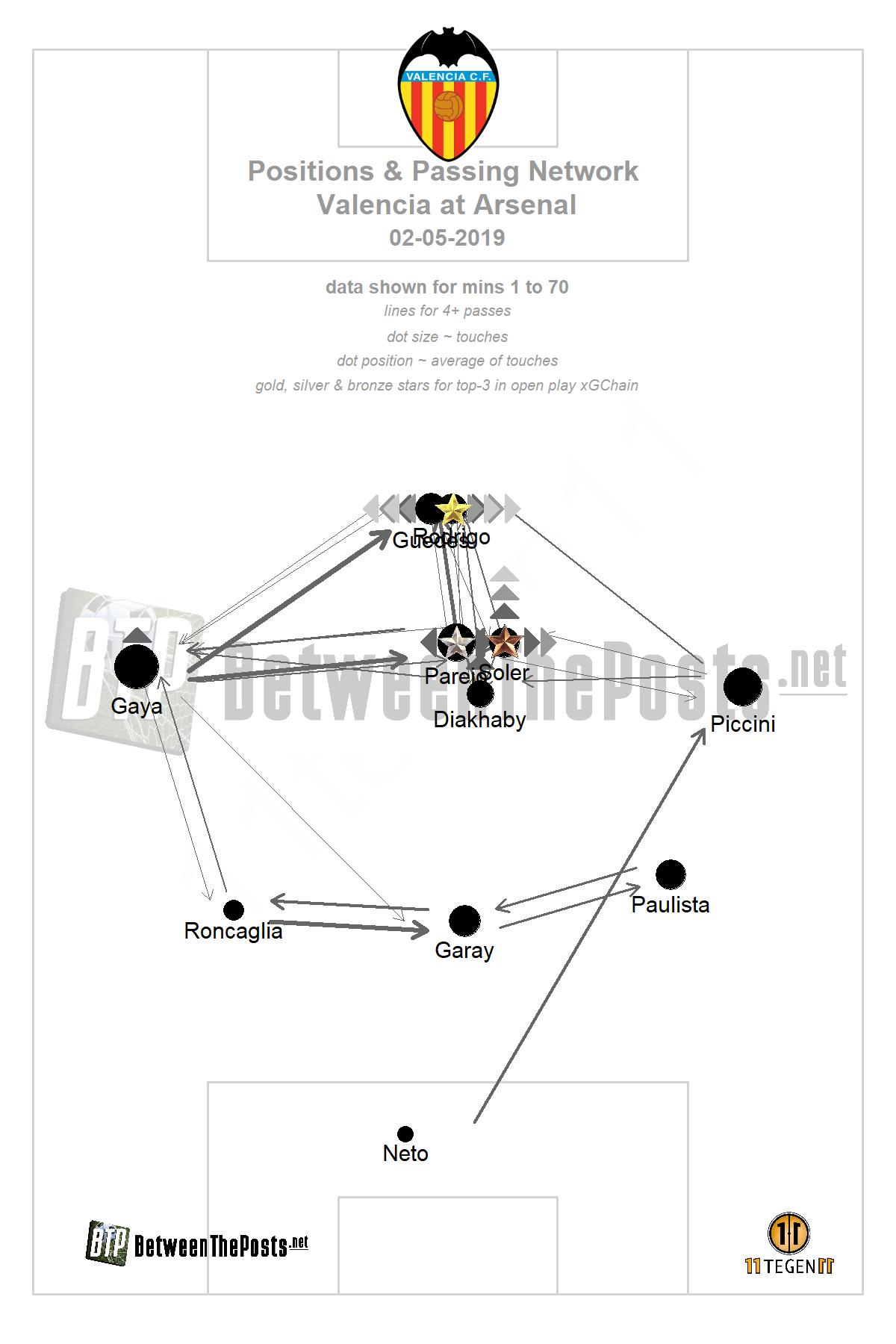 Valencia’s 3-5-2 formation, with both strikers drifting sideways and projecting centrally on average.

The key patterns for Arsenal in response to this involved Özil peeling wide to the left, looking to instigate close combinations with whichever striker was positioned on that side at the time. With these two and Sead Kolašinac, the trio would play it short within themselves and rotate consistently in their efforts to open up space inside. Similar was done on the far-side as Mattéo Guendouzi pushed up in Özil’s absence to create that triangular link. While on the left side, it was about creating a yard of space for Kolašinac – who could deliver in crosses for the strikers – on the right side it was more about finding the inside runners – typically Lacazette.

In the very early stages, there was a lot of dry possession, with Arsenal attempting these patterns, failing to break Valencia down but then counterpressing sufficiently to maintain pressure. It did eventually lead to something more, though.

As Özil was lured into the middle, the five-man defensive shape ahead of the back-five entrapped the German and forced a turnover. Uncleanly, José Gayà and the midfield managed to shift the ball forwards before Diakhaby was brought down mid-transition. The resulting free kick presented Valencia with their first opportunity. With Guendouzi unaware to the threat of Rodrigo at the back-post, the Spaniard was easily found at the far-post. Cleverly exploiting a passive offside situation, the central Valencia attackers had started in an offside position, meaning that when this tactic played out, they were behind the ball for the cross but still ahead of their opponents. The move resulted in a glorious tap-in chance for Garay, which he somehow put over the bar from no more than three yards out. 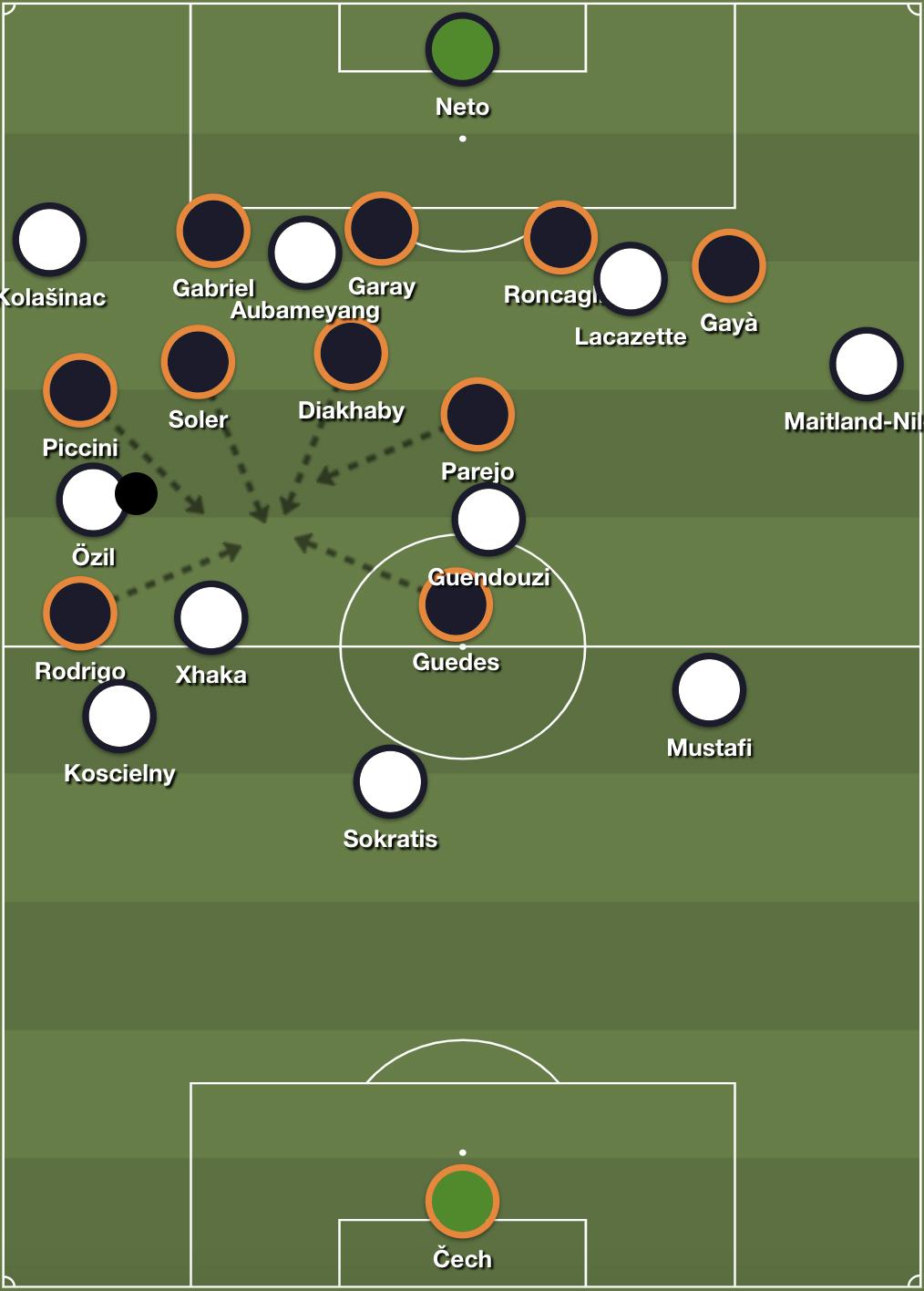 Illustration of Özil being lured into Valencia’s midfield trap.

Valencia did not have to wait long to get their goal, though. This time from a corner, Rodrigo was a far-post target once again. The looped ball was headed back across where Diakhaby towered above three Arsenal defenders to net from close range. 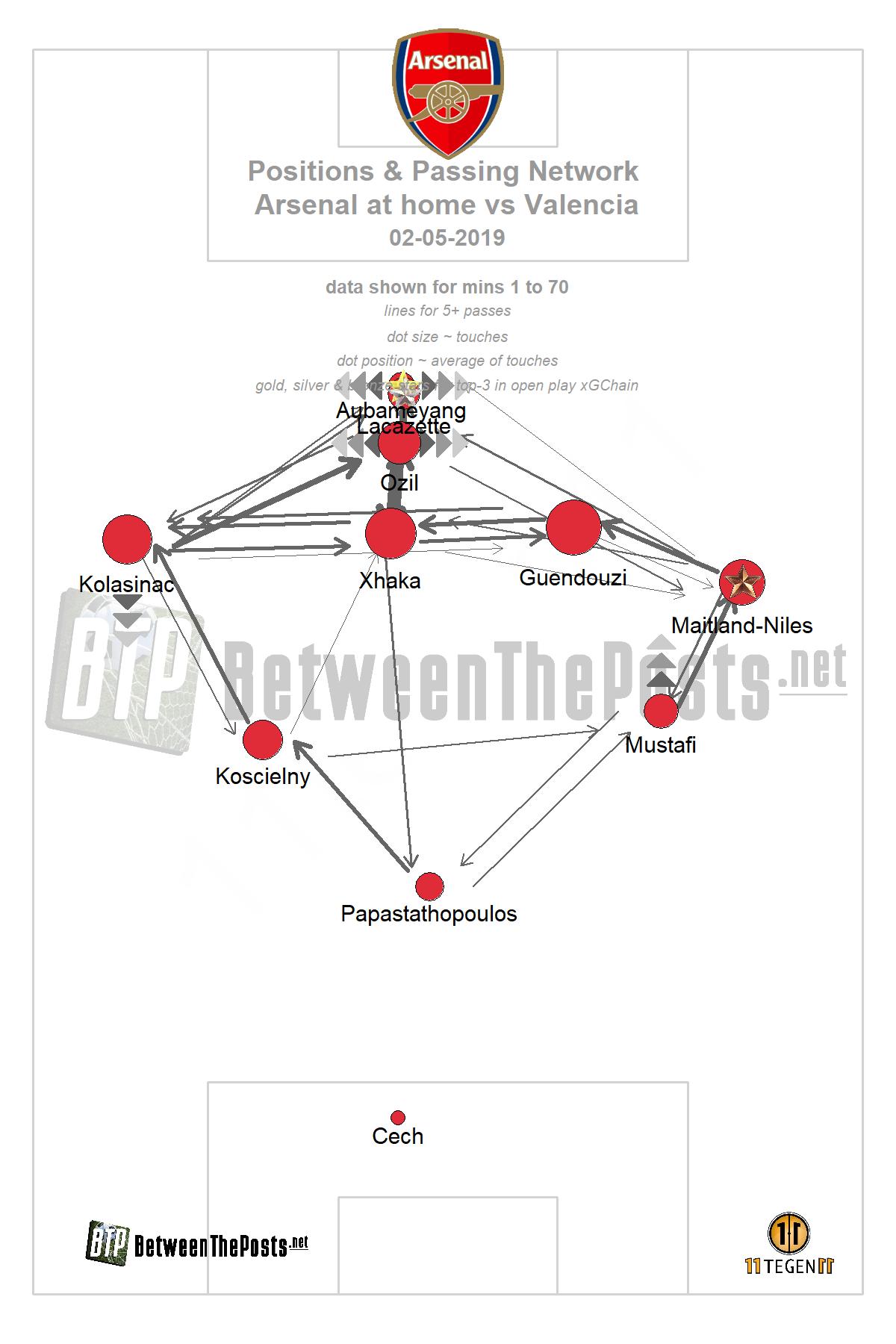 The onslaught of pressure did not stop there. Perfectly exploiting the spaces that were left in front of Arsenal’s 5-2-1-2 shape, Dani Parejo was afforded space inside to line up a shot, which he had no hesitation taking. A nothing situation might have been the outlook were it not for a dicey header back to Čech from Ainsley Maitland-Niles, which was intercepted by Guedes. The attacker’s nick on the ball sent it over, to the relief of the wingback.

As was the case for much of the goalmouth action in this match, Arsenal found themselves back on level terms from seemingly nothing. A knock-down from a long throw-in out from deep found Özil, who quickly exchanged the ball with Lacazette. He rolled his man and fed it through to Aubameyang. The striker’s blazing pace saw him reach the ball with ease before he faked inside and smartly laid it off for his French strike partner to slide into the open goal.

An enthralling opening twenty-five minutes was capped off with a second Arsenal goal. This time, Arsenal’s wide left rotations did manage to get the better of the away side. The aforementioned trio, plus Granit Xhaka, combined fluidly to create space for the deeper midfielder. This appeared to be a good example of how Valencia might not have fully learned the ways of this new system, as Soler had no need to cover the inside attacker.

Instead, he should have been out in front, getting in the way of Xhaka’s in-swinging cross. With Facundo Roncaglia ball-watching, he was unalert to the movement of Lacazette off the back of him, which gave the Arsenal striker a clear header at goal. Neto could not deal with the bounce into the ground and his attempts to scoop it back out from behind the line were unsuccessful, as the home side turned the game around.

Both sides enter a stalemate

Having taken out an attacking player and selected a very defensive midfield-three, Marcelino stifled the quality and presence of Valencia’s attack in open play. Although Rodrigo did a fine job dropping in and receiving in good areas, the options ahead of him were sparse. Guedes – who is by no means a natural number nine – did not do nearly enough to provide a constant threat in behind. He was often guilty of hanging slightly deep of the far-sided center-backs, which did little in the way of testing the Arsenal back line.

Without runners from deep, either, Valencia achieved very little in the way of testing any gaps that might have been left defensively. As a result, Emery’s men closed down as high up and as aggressively as they pleased, all without any form of consequence.

One of these attempts at breaking through the center saw Guedes hold a deep position to receive between the lines, before giving it away in an exchange with Rodrigo. The resulting turnover saw Arsenal break away with Xhaka driving forward. Özil’s intelligent run through the center then created a conundrum for Roncaglia, which soon left Aubameyang open. The striker was found but his difficult, volleyed finish disappointed.

Valencia were not the only team left feeling frustrated in attack. Arsenal’s efforts to break down Valencia in the wide areas were continuing to fall short, and that continued right through into the second half. Lots of simple combinations between three players, who were nowhere close to goal, only resulting in Kolašinac crosses from suboptimal angles and even-less-optimal deliveries. The Bosnian completed just one of his six crosses in this match.

To add to the bitty nature of this weirdly engrossing game, Lacazette had two further chances to get his hat-trick. A blocked Kolašinac shot from some distance took as many as three deflections before it found its way through to the aforementioned striker. He disguised a shot toward the near-post from close range but the right foot of Neto and then of Gabriel managed to prevent a third.

Then, in the final minutes, to epitomize this match, Aubameyang gave Arsenal a crucial third goal. Not one deflected shot this time, but two, took place before Kolašinac got the ball. He stood it up to the far-post and, with his first successful cross of the match, found the Gabon international. In at the near-post and through the legs of Gayà, he sealed the deal. 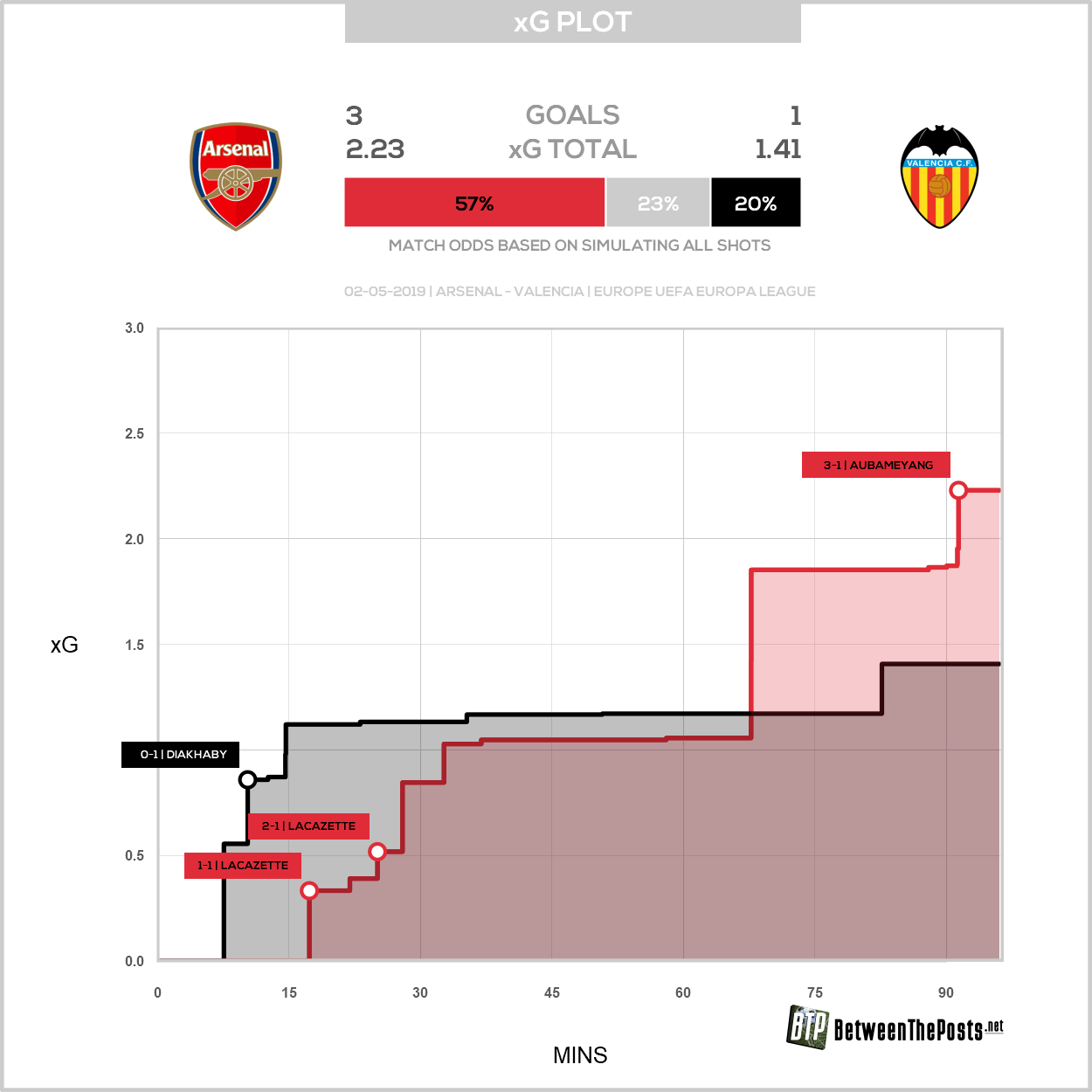 In a game hugely void of rhythm and persistent attacking dominance, we were given a frustrating yet still largely entertaining match. One best suited to the neutral, certainly.

In any case, Aubameyang’s ninetieth minute goal will likely prove crucial as Arsenal, having conceded that dreaded away goal early now have a two-goal lead to take to the Mestalla next Thursday. 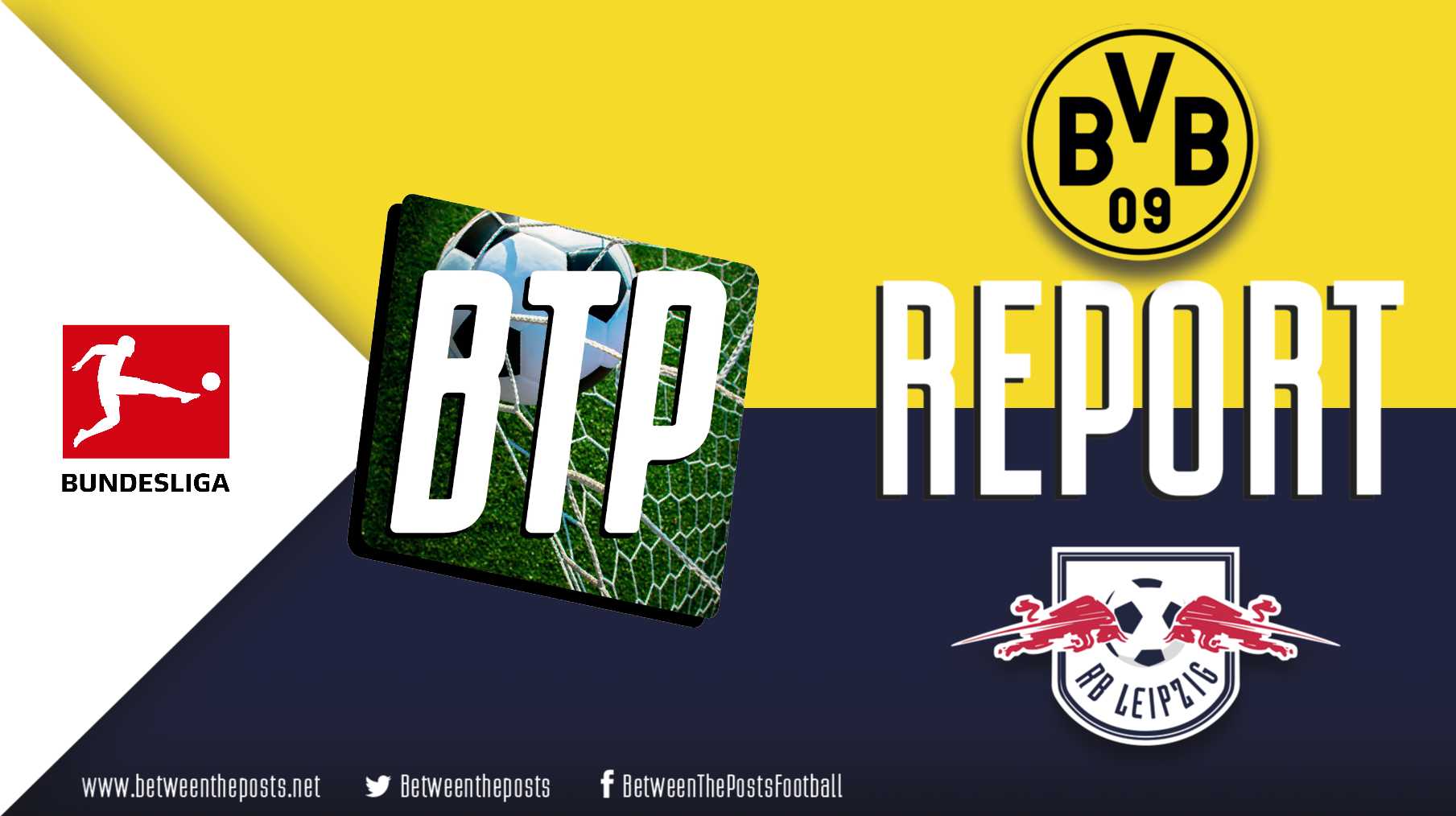