An intense relegation dogfight between two teams in a 4-4-2 formation ultimately went Monaco’s way. This stretched, back-and-forth encounter made for some intriguing end-to-end attacks. It was very clear that these two teams have shortcomings in their game, and sit at the bottom of the league table for a reason.

This clash in the penultimate match day was pivotal in deciding whether or not the four-team fight for survival at the bottom of Ligue 1 could potentially be reduced to three. The presumed favorites for this, Monaco, were level-pegging with SM Caen, who sat in the seventeenth place – which sends you to the playoffs –  but ahead on goal difference.

Leonardo Jardim’s side had not won a match since mid-March, when they beat Lille, of all teams. With a trip to OGC Nice awaiting them, it was paramount that they achieved victory, here. In the manager’s attempts to do so, he shifted a number of players around, following last week’s 1-0 defeat to Nîmes Olympique.

Carlos Vinícius and Benjamin Henrichs returned to the starting eleven, as Aleksandr Golovin drop into deeper midfield as part of the change to a flat 4-4-2 setup. Elsewhere, Djibril Sidibé replaced Rony Lopes in attack and Jemerson took Naldo’s spot in defense.

With eight draws and two wins in their last eleven games, Amiens have trudged through the last few months. They are still finding themselves near the bottom despite consistently gaining points, proving draws are useless in a three-point system.

Manager Christophe Pelissier also made a few changes to his side, which, last time out, drew 0-0 with Toulouse. Eddy Gnahoré was dropped from the midfield, whilst Cheick Timité and Stiven Mendoza also made way in attack. Pelissier’s move from a 4-3-3 setup to a matching 4-4-2 shape saw the arrivals of Moussa Konaté up front, as well as Saman Ghoddos and Juan Ferney Ortero on the flanks.

Ligue 1 standings at the bottom of the table.

Both sides aim to be aggressive and direct

What these two similar shapes enabled was a fierce matchup that saw both sides’ midfields stepping up at any given point, not fearing what was going on behind them. Although Monaco were the more likely side to sit off the ball, they were still forthright in their approach.

What soon became clear, was that neither side bared any intentions of playing into the midfield, it was all about bypassing it and finding the strikers directly. You might be thinking League One football instead of Ligue 1, but that was clearly not the case, as both sides often attempted to zip it into the feet of the strikers, and not so much aerially.

In Monaco’s case, it tended to come from them shifting it from side-to-side before having the fullback, usually Henrichs, play against the grain of Amiens’ defensive shift by playing it diagonally inside to Radamel Falcao. Combined with Sidibé’s movement to the fullback, it then opened up a slight space behind the defense, which Falcao could use to drag his center-back marker wider. It was a frequent tactic but one that brought very little success of note.

The other focus of Monaco’s attacks was Gelson Martins. In a game like this, where the margins are so fine, the slight qualitative advantages of a player who can beat people one-versus-one has the potential to be massive. However, Monaco rarely serviced it the dribbler’s feet, as Amiens were good at dealing with the more predictable wide exchanges on that side. Instead, they attempted numerous diagonals into him from the right; all of which were very poorly executed. 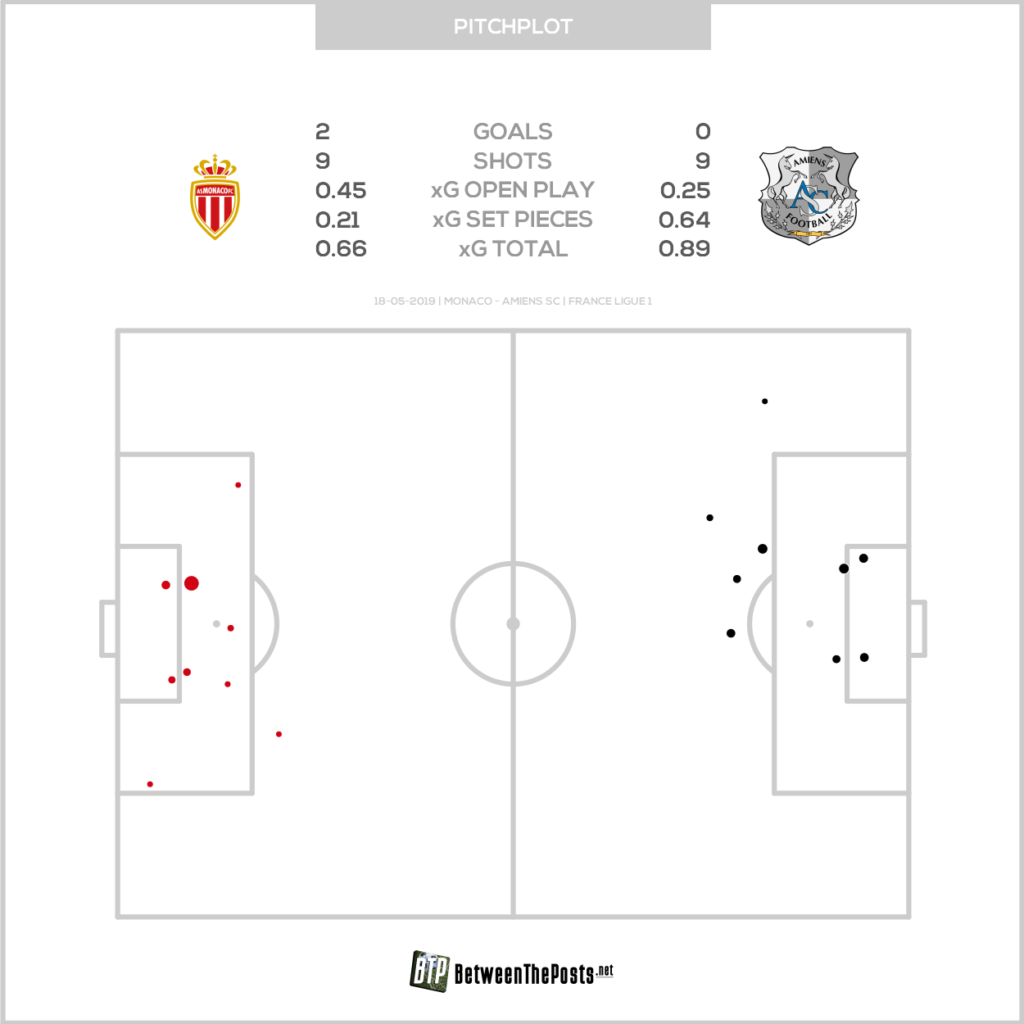 Amiens were afforded more time on the ball when they had possession. With this came a slower and more predictable feel to their attempts at progressing the ball upfield. With only the center-backs there to probe either side for advanced options, the ideas quickly ran dry.

Most of the time, Khaled Adénon would attempt a direct ball along the ground for Konaté. The problem with this was also indicative of their problems trying to attack in any space – how vertically stretched the pitch was. Monaco were not giving up any space in behind, so they were content to let Amiens widen the gap between each line of defense. It had a negative impact on Amiens more than it did on Monaco.

Whilst the home side then struggled to mount real counterattacks, the distances between Amiens players became greater, meaning the mere adjustments players needed to play these heavy passes into feet allowed Monaco to read the upcoming attempt and close the channels.

Additionally, when the ball arrived at Konaté’s feet, there were no freed up options he could lay it into, so this approach often resulted in a loose touch giving away possession.

This led to Monaco getting the opening goal. As Adénon slowly carried it out, he was forced to  play a simple, yet predictable, ball into Emil Krafth. The home side swarmed the fullback and took back the ball. And, since Alexis Blin had more frequently been dropping in to create a back three, there was only one central midfielder waiting to cover Monaco’s duo. This afforded Golovin some room to drive it forwards and across to the right where he cleverly cut it back across to Vinícius. The striker took on a hopeful shot and had it deflected out for a corner.

The resulting corner was lofted high towards the back of the penalty area, where Falcao spun his marker before beating him in the air. What followed was a simple header met by a horrendous fumble from Régis Gurtner, to give Monaco a crucial lead twenty-six minutes in.

The slow-paced possession from Amiens continued. With Blin dropping back, Amiens transitioned into a 3-5-2 formation but the attempts were all the same. They had no intentions of exploiting the midfield overload When one team has more players in a certain area or zone than the other team. on the ground, they only used this for second balls. 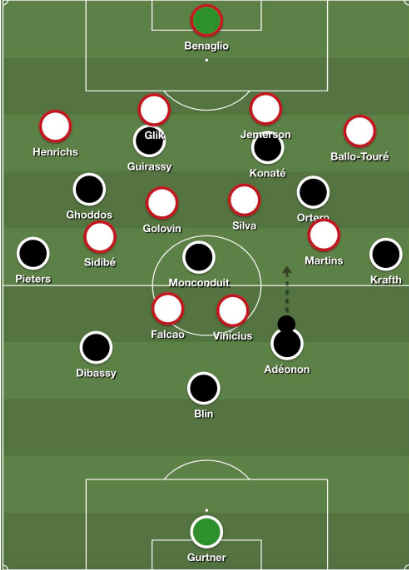 As the game wore on, more and more balls were being pumped into the air for the strikers to win. And, to their credit, they were getting the better of their opposite numbers and were winning a handful of the knockdowns, too. Earlier in the match, this same approach that had been producing pinball-like football in the center, which earned Ortero a yard of space as the ball bounced wide. He knocked it past an opponent before whipping in an early ball that was blazed over the bar by Guirassy.

What also continued were the number of fouls being committed. Monaco, in particular, who committed twenty-one fouls by the end of it, were handing Amiens opportunities to gain a scrappy goal much like theirs. No matter how far out they were, it was never too far for Amiens to send the defenders up, even though none of these resulted in anything noteworthy.

The one set piece that did provide an opportunity came a few minutes before the break. A simple foul on the corner of the box saw a free kick disguised short and into the middle for a shot from range. Diego Benaglio parried the shot well enough but only into the path of three Amiens players to the side, who had all been abandoned by their markers that had stepped out against the initial shot. Ghoddos was the recipient of the rebound but his volleyed attempt was sliced agonizingly wide.

Amiens continue to apply pressure but are short of ideas

By the end of it all, there had been sixty (!) aerial duels, which just went to show the lacking inventiveness of Amiens’ attacks.

In the end, this only led to one genuine chance for Amiens. In the sixty-third minute, Konaté drew out Kamil Glik from a goal kick to win another aerial duel. His flick-on then found the run of Guirassy through the now-open channel. He drove forward but was caught up with soon enough despite pulling off a drilled shot that was still comfortably saved.

Monaco did manage to deliver the killer blow come the end of it. With fewer than ten minutes to go, Thomas Monconduit, off the back of a loose ball from a long throw-in routine, decided to head it back into the congested pack of Monaco defenders, rather than nod it wide to keep the pressure on. He paid the price for this. The ball found its way to Sidibé, who played it short first time for Golovin, where the Russian midfielder then sped away from Bakaye Dibassy with ease before slotting it into the far, left corner. 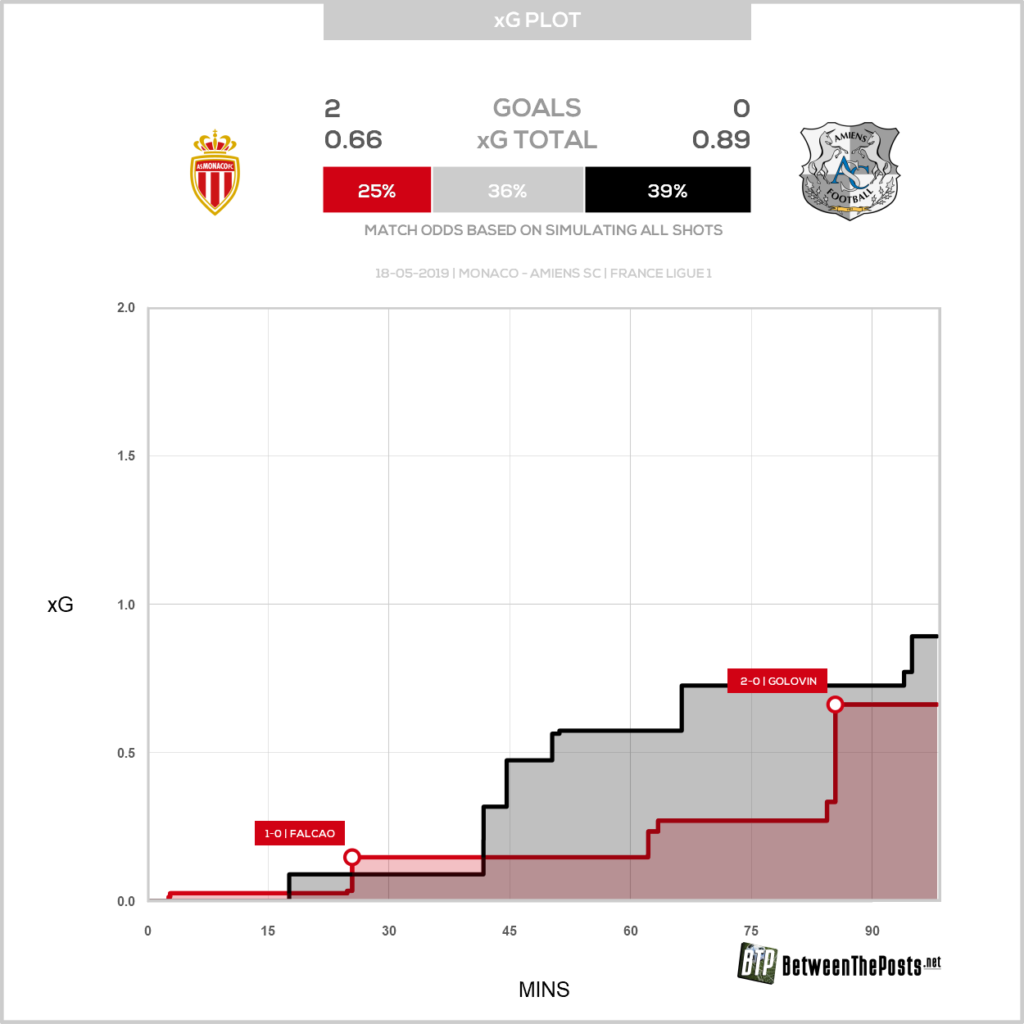 At the end of that, Jardim will just be thankful for the victory. The performances from either side were hardly deserving of wins but in such a closely fought contest, it often comes down to the smallest things.

Monaco look to be safe now with a huge advantage over Caen – who lost 4-0 to Olympique Lyonnais at the same time – on goal difference. Amiens, however, look to have been dragged back into the race with one game to go. Their home game against EA Guingamp, on paper, should be comfortable enough to relieve them of any playoff spot pressure. 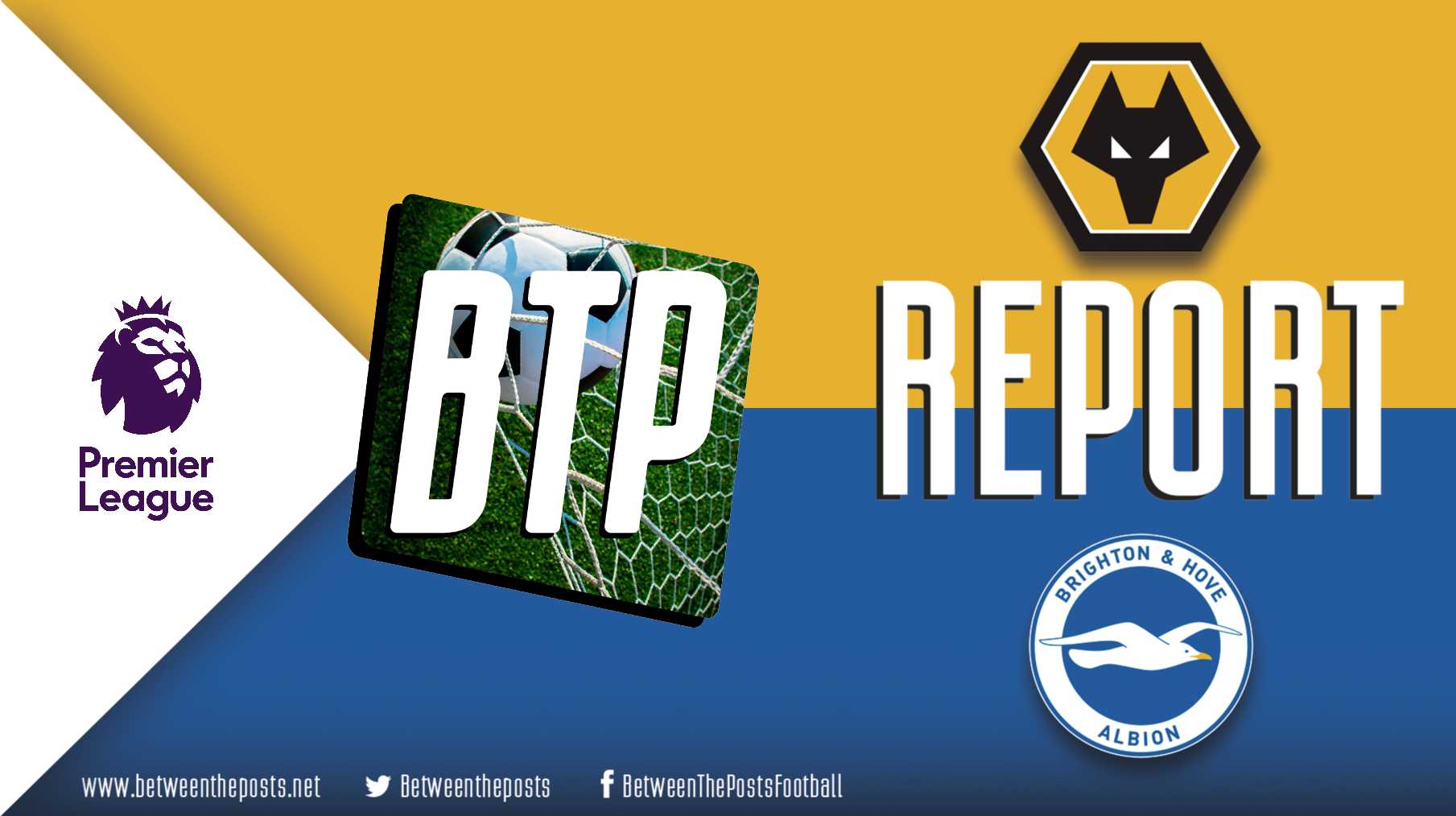 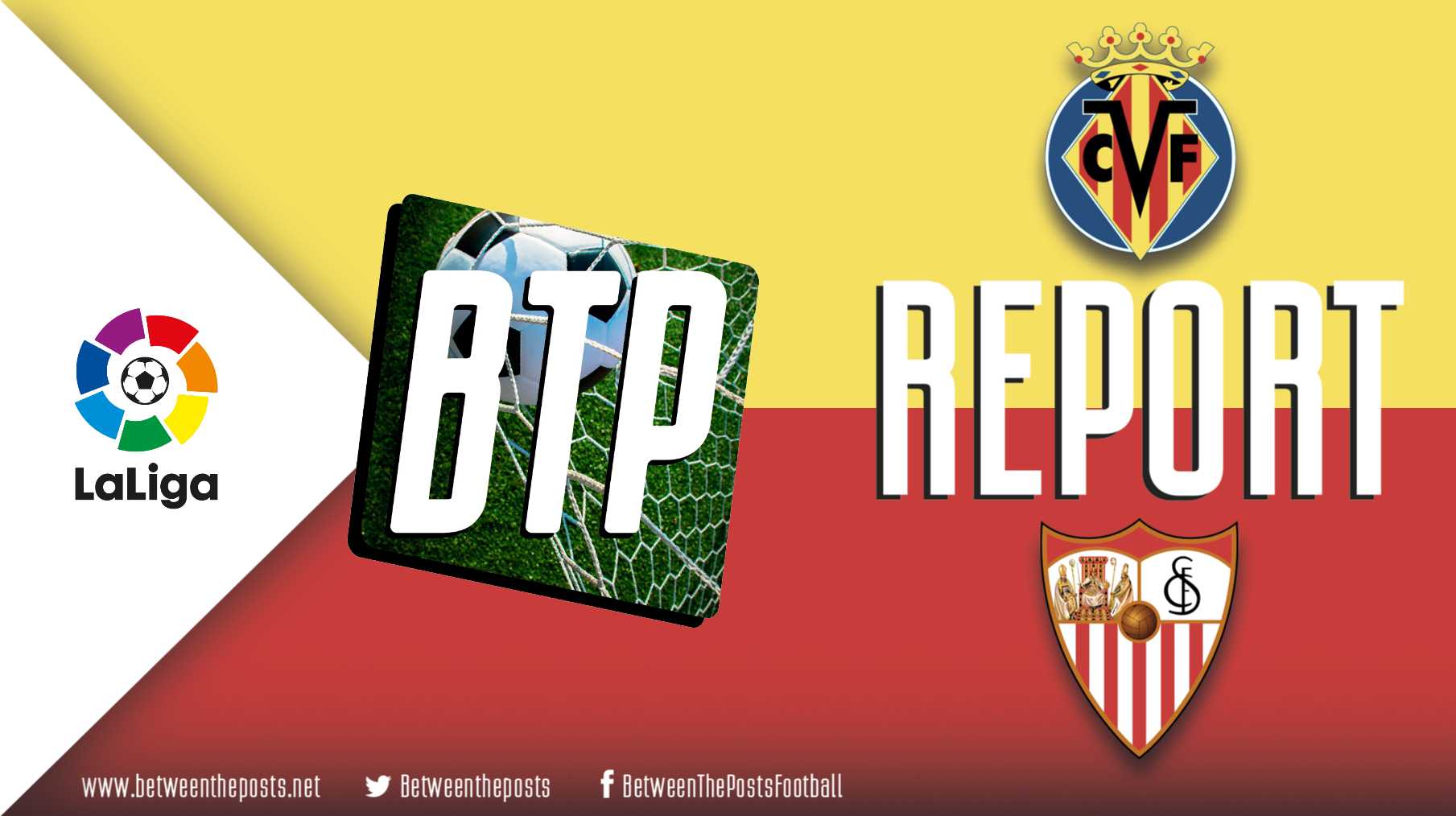