Both teams took turns scoring goals against terrible defensive structures, with Olympique Marseille ultimately ending up on top. While manager André Villas-Boas might be able to move past this performance, this loss might end up being fatal for Leonardo Jardim.

AS Monaco have had a tough time of late; Leonardo Jardim, the legendary coach who led Monaco to their first league title in 2016/17, was sacked in October of last season after going winless in eight of his first nine league games. Their terrible start to the season came off the back of incredible squad turnover – they lost key players like Thomas Lemar, Fabinho, and João Moutinho – and some serious expected goals The amount of goals a team is expected to score based on the quality of the shots they take. underperformance. But football is a results-oriented sport and Monaco did not have the patience to wait for regression to the mean, In any event where a certain factor of luck is involved, like football, outcomes that differ from what one would expect based on underlying statistics are not sustainable over long periods of time. When a team starts scoring or conceding goals again in a way that is more suitable to their underlying statistics, this is an example of ‘regression to the mean’, as the unexpected results do not occur any longer. prompting them to replace Jardim with club legend Thierry Henry.

As was to be expected, the appointment was an absolute disaster. Henry had barely any experience as a coach and his questionable tactics quickly led to a full-blown crisis in the dressing room. Clearly regretting their decision, Monaco fired Henry in late January and reappointed Jardim. Monaco enjoyed a brief resurgence thanks to the new manager effect, but the consequences of such a poor campaign could not be suppressed, and the proud French club finished just above the relegation zone.

Things have not gotten much better this season. Monaco are a defensive disaster, having conceded 1.77 expected goals per game in their first four fixtures, which is enough for third worst in Ligue 1. That has seen them give up three goals in each of their first two league games before they let leads slip in their next two matches.

Marseille have gotten off to a comparably better start under new boss André Villas-Boas. They bounced back from a loss to Reims and a draw at Nantes by beating Nice and Saint-Étienne in tight encounters from the perspective of underlying numbers. A lot of that evenness had to do with their poor offensive production; they had only produced 0.98 expected goals per game up until this point, which made them the fourth worst attacking unit in Ligue 1. Their defensive numbers, by contrast, looked decent within the same time range, something that would change after their match with Monaco.

Aside from shifting right winger Bouna Sarr to right back in place of Hiroki Sakai, Villas-Boas did not deviate much from the lineup he had been using to begin the season. New signing Darío Benedetto started up top next to left winger Dimitri Payet and right-sided midfielder Valère Germain. Behind them, sat defensive midfielder Kevin Strootman in-between interiors Maxime Lopez and Morgan Sanson. The defense consisted of the aforementioned Sarr, Boubacar Kamara, Álvaro González, and Jordan Amavi. Steve Mandanda started in goal.

By contrast, Jardim made plenty of adjustments from his side’s 2-2 draw with Strasbourg. He changed the formation from a 3-5-2 back to his preferred 4-4-2, leading to Ruben Aguilar playing right back in place of Gelson Martins. Martins, instead, played further forward on the same wing, while Aleksandr Golovin was moved from right central midfield to the left flank. The restructuring of the midfield was finished off by a Timeoué Bakoyoko-Cesc Fàbregas  double pivot, 4-2-3-1 is one of the most frequently occurring formations in football. The two most defensive midfielders are called a ‘double pivot’. pushing Gil Dias and Adrien Silva to the bench. Wissam Ben Yedder and Islam Slimani kept their places up top.

AS Monaco first to capitalize on disastrous defensive tactics

Given Marseille’s relatively solid numbers against the ball, it was something of a surprise to see them defend so poorly throughout the game. Despite possessing the men in midfield to stay horizontally compact in their 4-1-4-1 structure, they were repeatedly exposed throughout the center. At least some of this had to do with Marseille’s inability to deal with Fàbregas dropping to create a situational back three. 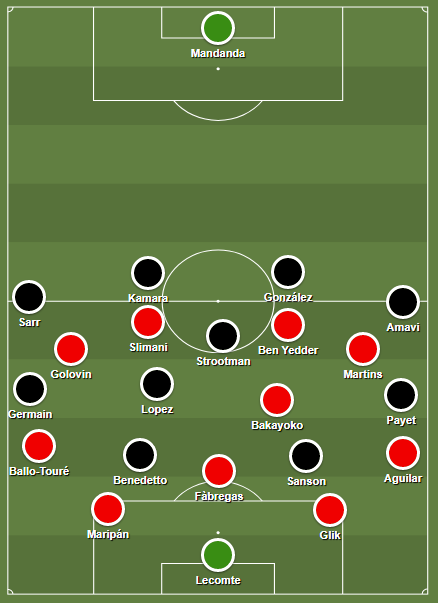 Such movements from a team’s key playmaker or defensive midfielder have become incredibly common over the last decade or so and every respectable team should have an idea of how to deal with that. Marseille looked absolutely clueless. The original plan seemed to be to press Monaco’s center-backs with Benedetto and an advanced central midfielder – usually Sanson – but they were foiled time and time again when Fàbregas created the deep overload. When one team has more players in a certain area or zone than the other team. Marseille could not figure out whether they wanted another central midfielder to follow Fàbregas or whether Benedetto or Sanson should mark the Spanish playmaker while cutting off access to the far side. The far side is the side of the pitch where the ball is not.

As a result, it was incredibly easy for Monaco to exploit Sanson’s high positioning and find the free man in Bakayoko. But, since Bakayoko is not exactly the greatest playmaker, Monaco struggled to take advantage of their easy ball progression. That was until Monaco played a lofted diagonal from the right-hand side of the pitch and caused Kamara to handle the ball, leading to a penalty that Ben Yedder dispatched.

Ten minutes later, Monaco struck again on the counterattack. Gelson Martins received the ball centrally and executed a beautiful drag-back in midfield before setting Islam Slimani free down the left wing. The Algerian forward cut inside and delivered a sweet through ball that Ben Yedder converted after initially firing his shot off of Mandanda.

AS Monaco felt good about themselves for a solid twelve minutes before they conceded a goal that would set the stage for an epic collapse. They probably should have conceded much earlier, but Marseille seemed initially incapable of taking advantage of a defensive structure that was arguably worse than their own. 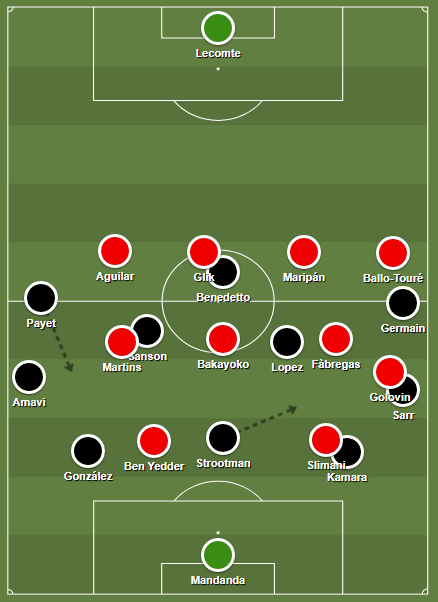 The idea was to play a 4-4-2 medium-high block A medium block refers to a team that retreats in their own half out of possession, generally only disrupting their opponents some way into their own half. A high block refers to a team that regularly leaves their own half out of possession, to disrupt their opponents far into the attacking half. A medium-high block is well… in between these two variants. that trapped Marseille on the wings. Hence, Monaco’s defensive shape was very wing-oriented and narrow. But, interestingly, they suffered the same problem as Marseille – Monaco had no idea how to deal with the presence of Strootman, who provided a three-versus-two overload against forwards Ben Yedder and Slimani. One might imagine that the simple solution would be for the far side striker – who was most often Ben Yedder, since Marseille preferred to build down their right – to pinch inwards and cover Strootman.

For whatever reason, Monaco declined to do so, and Marseille found it extremely easy to escape their opponent’s tight marking on the wing by finding Strootman in the middle. Due to Monaco’s narrow defensive structure, the dropping Payet and Amavi were easily found on the far side, where they could progress play into the final third. The one-third of the pitch that is closest to the opposition’s goal. 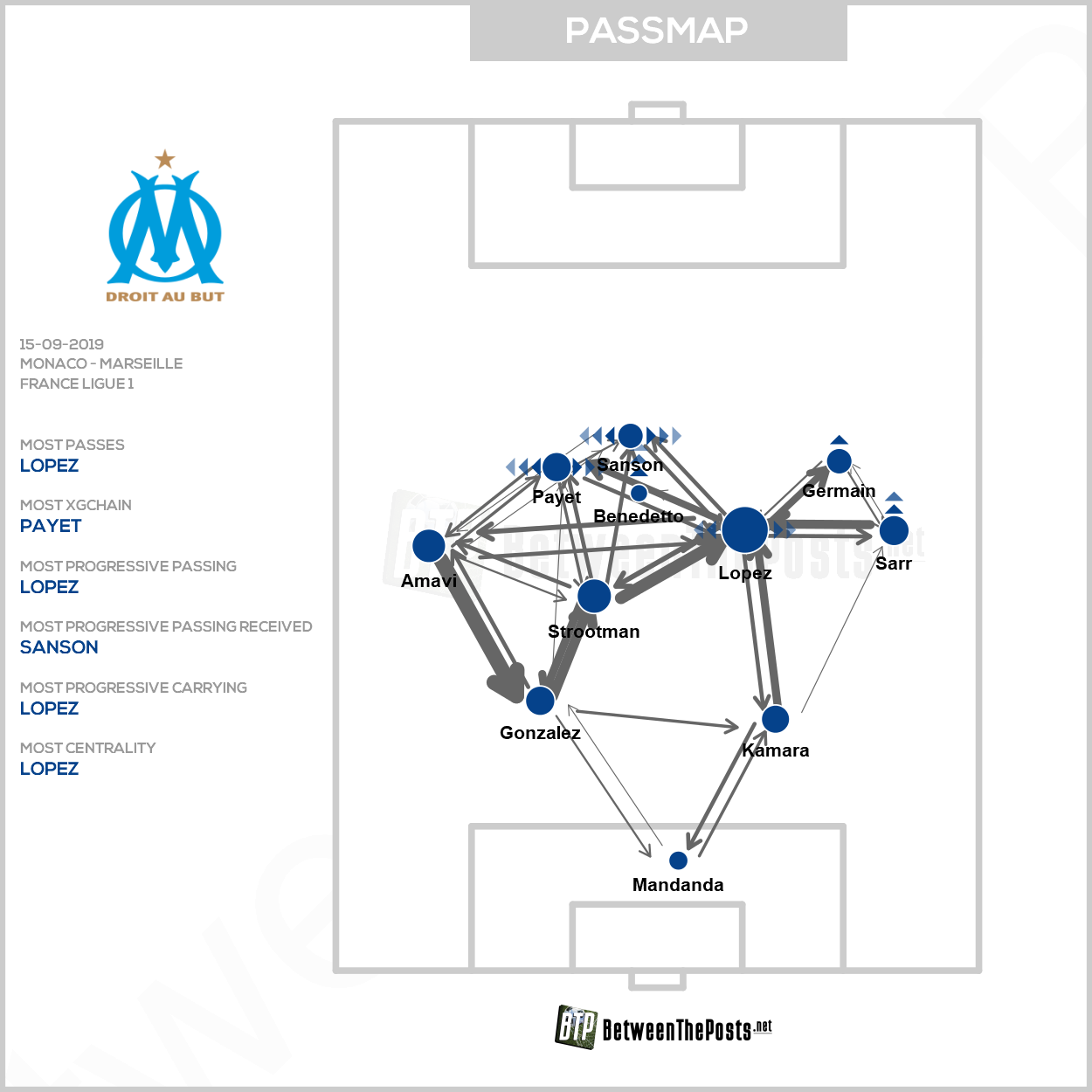 Monaco would react by trying to quickly shift their shape in order to replicate what they had done higher up the pitch. But their main problem – an inability to mark Strootman – allowed Marseille to continually shift the ball from side-to-side until they got a free cross. Initially, this did not hurt Monaco, as Marseille were sloppy with the ball and were not quick enough with their passing. Additionally, center-back Kamil Glik did a good job blocking crosses into the box.

That dynamic changed in the 38th minute, when Germain, under no pressure whatsoever, put in a low cross from the right that missed everybody except Benedetto at the far post. Moments later, Germain scored at the opposite far post following a cross from Strootman that came off of a failed set-piece. Goalkeeper Benjamin Lecomte probably should have saved the goal.

The rapid comeback put Marseille in a good position going into the second half. Finally in their offensive groove, they flooded into the final third with ease and looked to quickly pass the ball to their active interiors Sanson and Lopez, who positioned themselves high and made runs down the channels.

Soon after Ben Yedder was forced to come off due to an injury, Marseille’s side-to-side passing found Payet in space on the left. The Frenchman cut inside and curled a shot from distance to put his team in the lead.

Having given up a two-goal lead for the second time this season, Monaco’s spirit was almost completely broken. They stood and watched as Marseille played one-two’s through the left side of their defense to set up a fourth after Benedetto converted a Jordan Amavi cross.

High from the comeback, Marseille stopped pushing forward and allowed Monaco more of the ball. But they seemed to have forgotten how equally terrible their defending was and allowed Bakayoko to dribble down their right flank and deliver a cross that substitute Keita Baldé put away emphatically.

Heartened by the goal, Baldé led a fight-back that produced a couple more shots but ultimately failed to equalize the score. Thus, one of the worst defensive spectacles of all time ended 4-3 in Marseille’s favor. 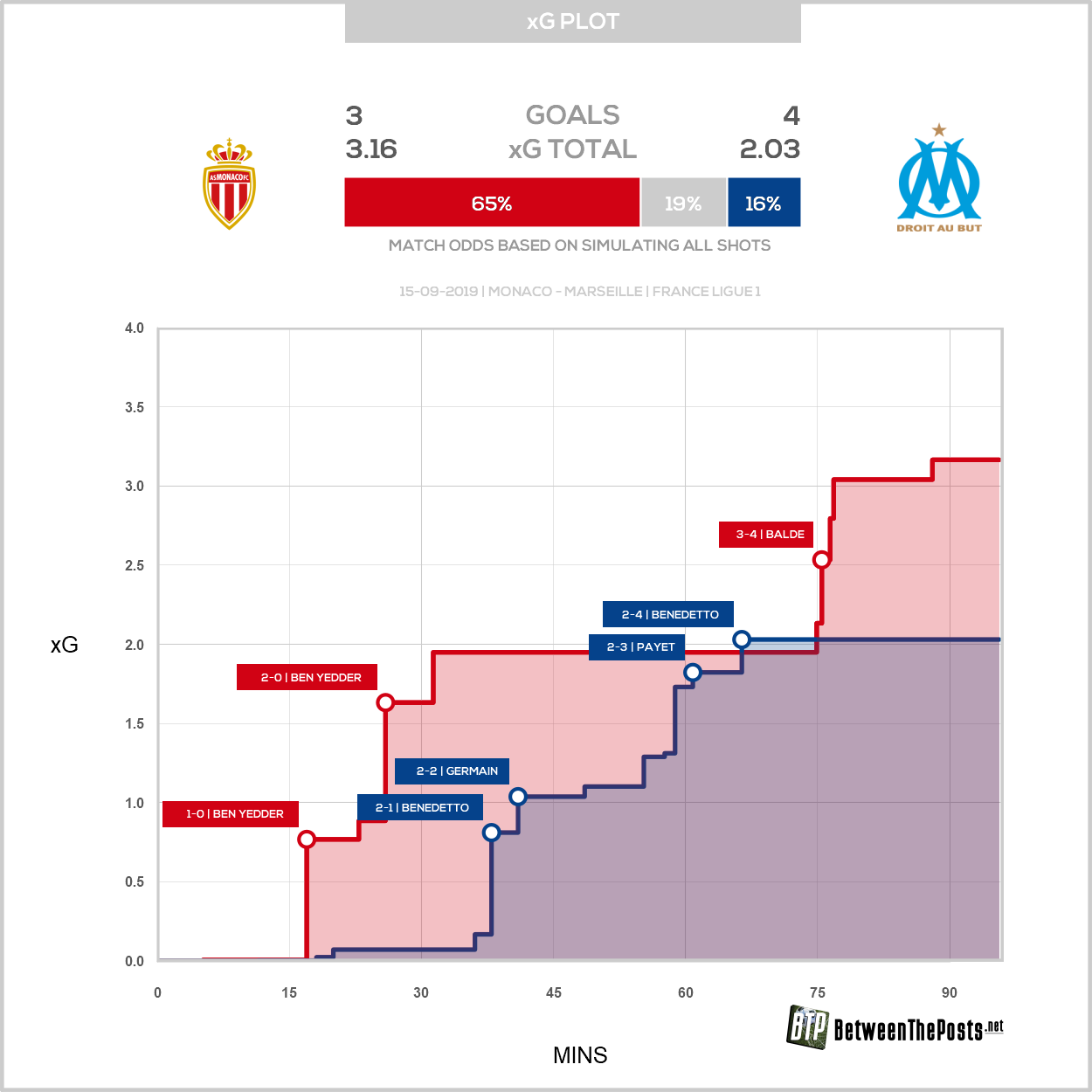 It is hard to explain why Villas-Boas’ side imploded on the defensive end after putting in relatively solid performances without the ball in their last four games. It might just be a blip, but it is hard to say so without a larger sample size. Fans might be inclined to take away some positives from their offensive game, which has looked weak up until this point, but, given the opposition, it is difficult to infer too much about Marseille’s attacking abilities. 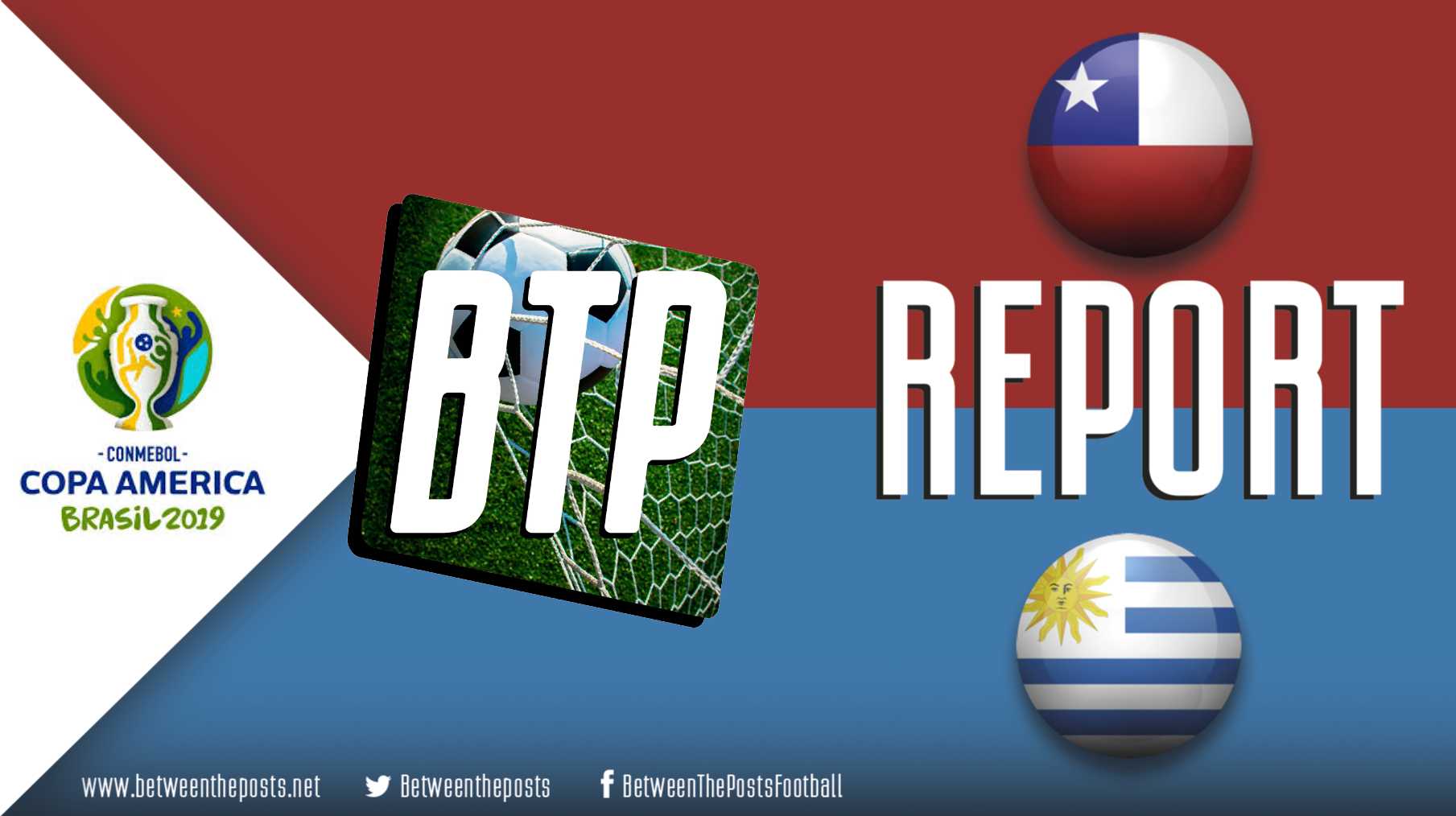 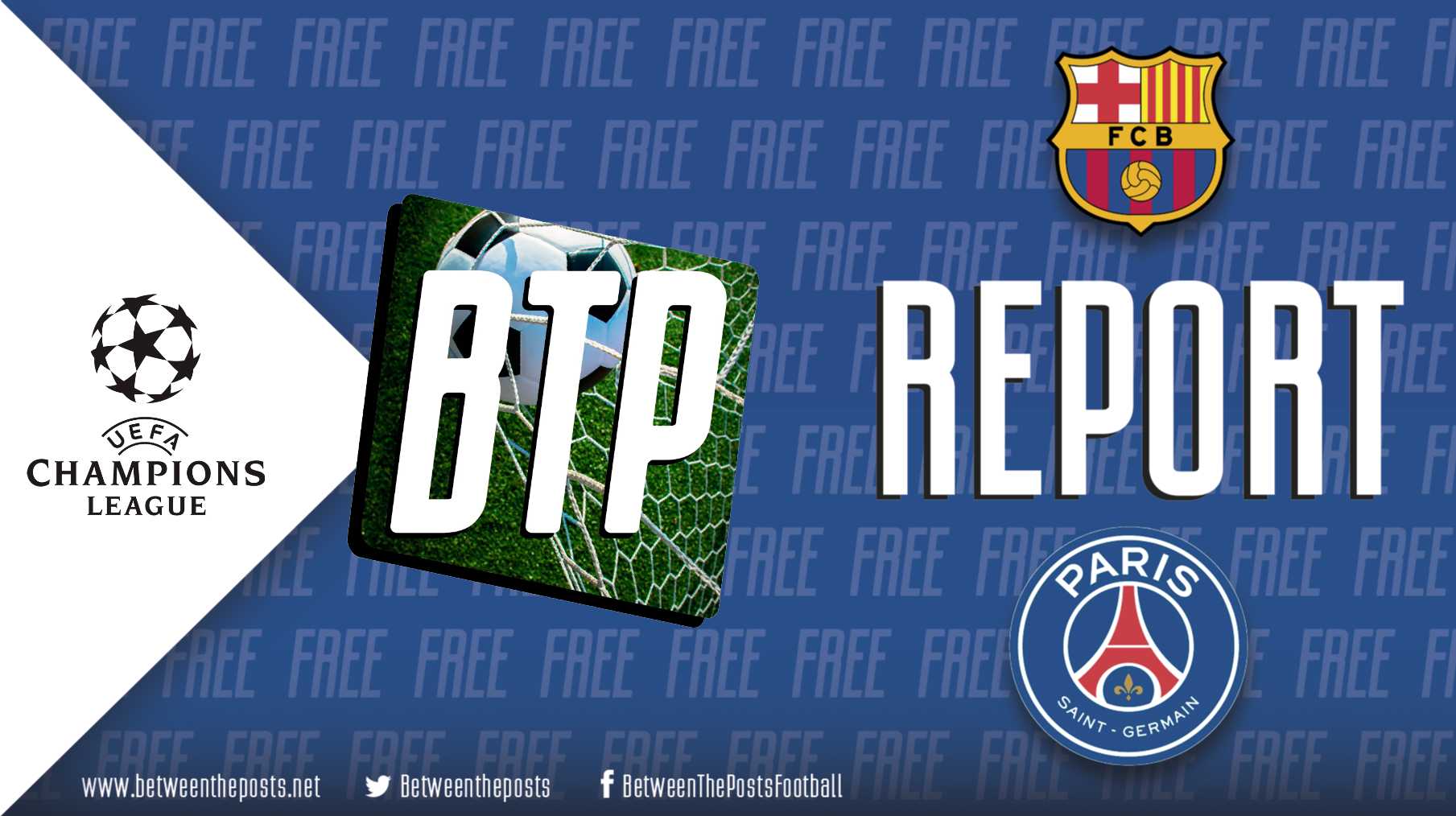