Although no team was able to exert control for large portions of the game, Atalanta dominated Juve in terms of creating chances in the first half. A strong start to the second half saw Gasperini’s men take the lead. Just when Atalanta seemed to have reached safe waters, Maurizio Sarri’s adjustments altered the contest.

There probably is not a more significant thing that unites club football fans than international football. The two-week breaks are seen as unsustainable periods that merely serve as interruptions to the pleasantly familiar flow of club football.  These negative feelings are undoubtedly shared by the club managers, who needs to sustain training sessions with depleted squads, knowing that fitness levels of the returning players are far from guaranteed.

Therefore, Maurizio Sarri having to cope with the absence of Cristiano Ronaldo, Adrien Rabiot and Alex Sandro came as no surprise. Likewise, in addition to Duván Zapata’s persisting injury, Ruslan Malinovs’kyj was ruled out of the tie, with Josip Iličić keeping them company in the stands due to suspension. Juventus’ most consistent defender and Atalanta’s second-highest scorer both cut out of the picture in an encounter that involved the best defense in Italy and the most feared attack.

Although the premises laid the foundations for an extremely interesting tactical battle, neither of the two teams could be considered at the top of their game. Juventus was still trapped in a series of unconvincing performances which Atalanta will have been eager to make the most of, whereas Giampiero Gasperini’s side came off the back of four consecutive games without a win. Two situations few would have expected given the rampaging starts by both teams. When Atalanta annihilated a helpless Udinese by seven goals to one, nobody could have imagined that this would be followed by such a stall. In much the same way, Juve’s win over their title contender Inter seemed like the prelude to future happenings.

Either way, without their best players, Sarri and Gasperini set their pawns to initiate the chess match.The Juve manager replaced Alex Sandro with Mattia De Sciglio and started Paulo Dybala, Gonzalo Higuaín and Federico Bernardeschi in the attack. Gasperini, on the other hand, fielded youngster Musa Barrow in place of the injured Zapata.

Starting from a medium block A medium block refers to a team that retreats in their own half out of possession, generally only disrupting their opponents some way into their own half. structure, Atalanta mainly pressed on backpasses, preferring the more conservative approach we have been accustomed to this year. By contrast, Juventus pressed high from the start, only retreating into a 4-3-1-2 medium block when the press was bypassed.

Like against Leverkusen and most recently, Milan, the ball-side central midfielders pressed the half-back, while the attacking midfielder stuck to the closest pivot. The pressing scheme was effective this time, forcing Atalanta long on numerous occasions, however causing issues to arise elsewhere. Whenever Atalanta picked up a second ball up the field, Juve struggled with defending overlaps When a wide player, most of the times a wing-back, runs outside to fill in the space left by a winger going inside with or without the ball, this is called overlapping. due to poor shifting, which isolated Cuadrado against Robin Gosens and Alejandro Gómez. 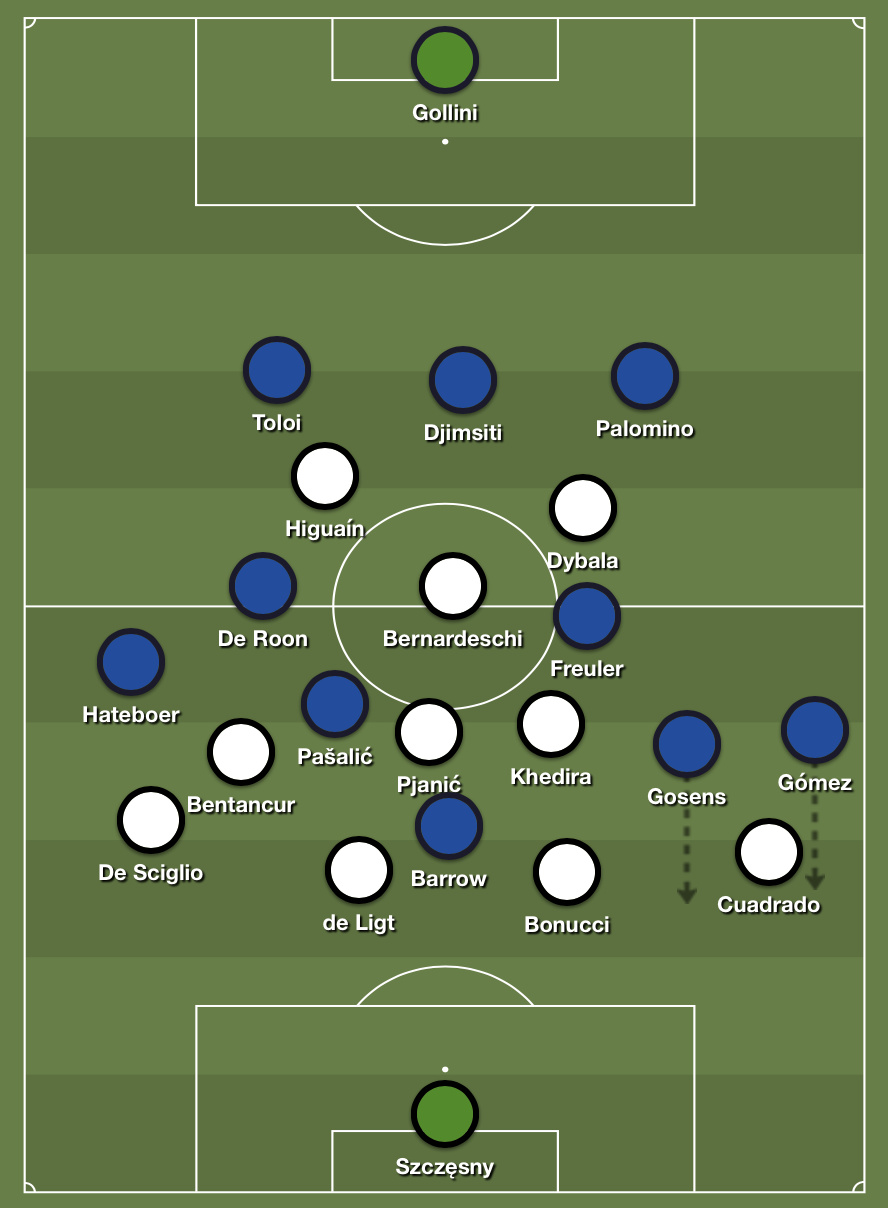 The numerical superiority Atalanta could consistently achieve against Cuadrado was the first half’s leitmotiv.

The ease with which Atalanta could bypass Cuadrado, though, allowed them to produce big chances with almost no effort. Around the twentieth minute, an overlapping Gómez whipped in two dangerous crosses that almost hit the back of the net after teammates headed the ball towards goal. By then, Musa Barrow had already failed to convert Atalanta’s best chance of the game, a penalty awarded for a rather random handball by Sami Khedira.

The main source of problems for Juve in the first half was certainly the defensive phase, but another contributing factor came with possession phases. Juventus’ strategy on the ball consisted of passes into the opposition’s defensive structure from which they could then disrupt Atalanta’s man-marking schemes with quick combinations in the center.

Despite being confined to the right side due to De Sciglio’s conservative attitude, Juve had a good variety of solutions to disorganize the opposition. However, individual technical and tactical mistakes precluded any tangible offensive threat. Consequently, Juve’s possession phase saw the attackers collect the ball deep quite frequently, even up to the halfway line, which often made the offensive structure flat and exposed to counters whenever the ball was lost. 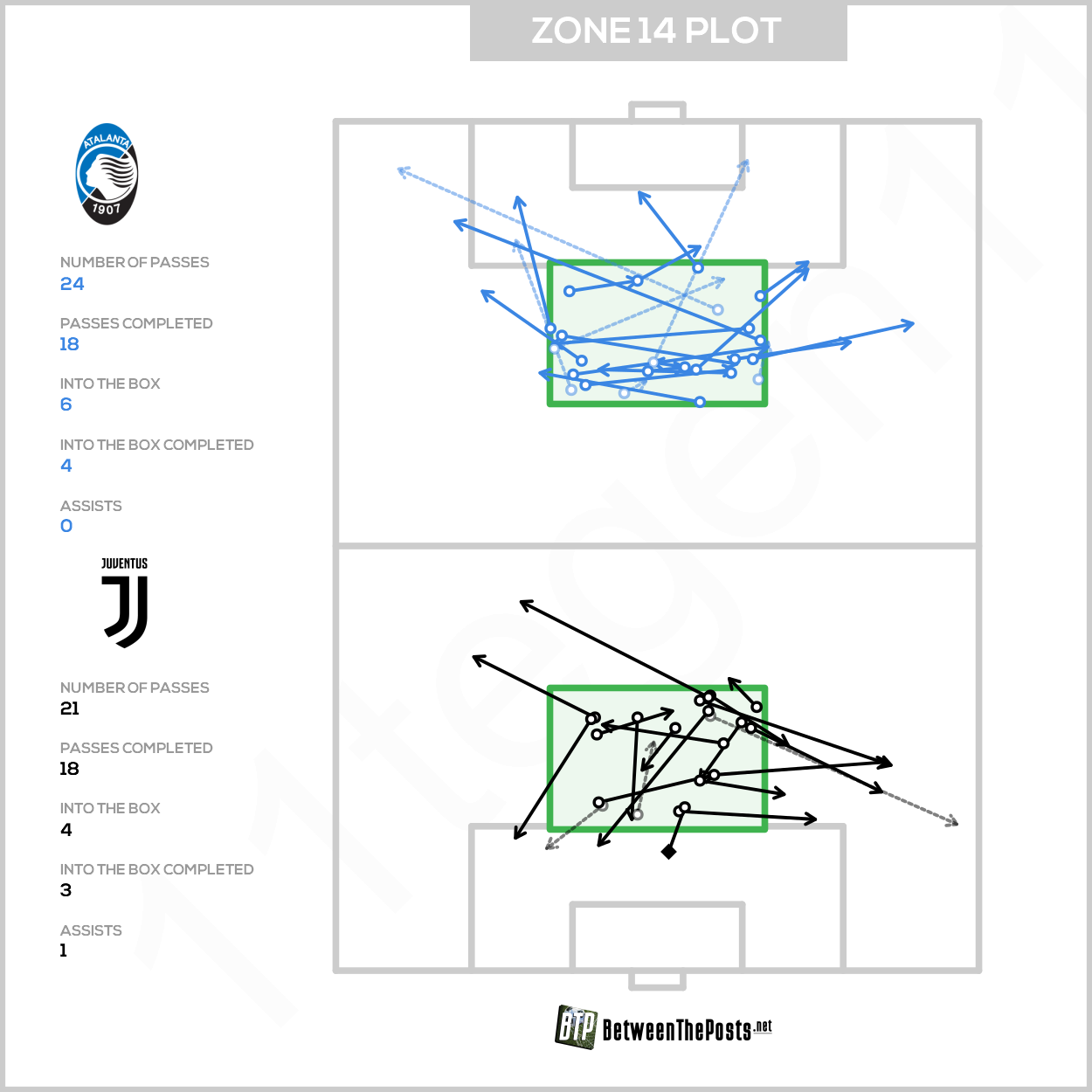 With the second half underway and the score still goalless, Atalanta started increasing the pressure, leading to two dangerous possession losses from Juve in the buildup. Gómez and Musa Barrow stepped up more aggressively on the center-backs, which required an unrealistic speed and incisiveness from Juve that their shape could not sustain.

Eventually, Atalanta took a deserved lead through a cross from Barrow that found a free Gosens header on the far post.

Maurizio Sarri immediately reacted by subbing out Rodrigo Bentancur for Douglas Costa, who was supposed to add the verticality Juve had been missing. The lack of depth, and an uninspiring Costa, though, prevented Juve from truly putting Atalanta’s defense up for a test, meaning that the possession often froze around the key areas of the final third. The one-third of the pitch that is closest to the opposition’s goal.

Conversely, Atalanta encountered no obstacles when attacking Juve’s defense. If they were not able to consolidate the possession, then they could sit back and wait for the opportunity to counter. The latter situation always presented itself to the hosts due to the structural issues limiting Juve’s attacking intentions and subsequent counterpressing options, too.

The lack of width on the left side confined Juve to the right side and central areas, while the lack of depth turned every attack flat and stale.

In the seventieth minute, Emre Can replaced Khedira. The substitute, despite not bringing significant changes to the possession game – making various technical errors and poor decisions, actually – greatly improved Juve’s aggressiveness both during transitions and defensive shifts, which solved Juve’s struggles without the ball.

Four minutes later, a series of rebounds that eventually landed on Higuain’s foot for a deflected goal gave Juve an unexpected equalizer. Even so, the use of both flanks’ width played a part in the preparation of the goal, stretching Atalanta’s defensive line and opening gaps into the center. Thus, galvanized by a goal that had seemed unattainable, Juve finally started using both sides of the field equally to open otherwise locked gates.

The result of the increased variety in possession was another switch of play from the left. Cuadrado made one of the few overlaps into depth the visitors had seen throughout the course of the game and Dybala, on the edge of the right side of the box picked the fullback’s run behind Timothy Castagne for a cutback into Higuain’s path. A chance the Argentine could not miss, and he simply put Juve up by one goal.

Desperately in need of an equalizer, Atalanta pushed all men forward until, in the ninety-second minute, a quick pass from Wojciech Szczęsny initiated a counterattack that Dybala finished off to wrap up the match. Three to one for the visitors and yet another scraped out Juve victory. 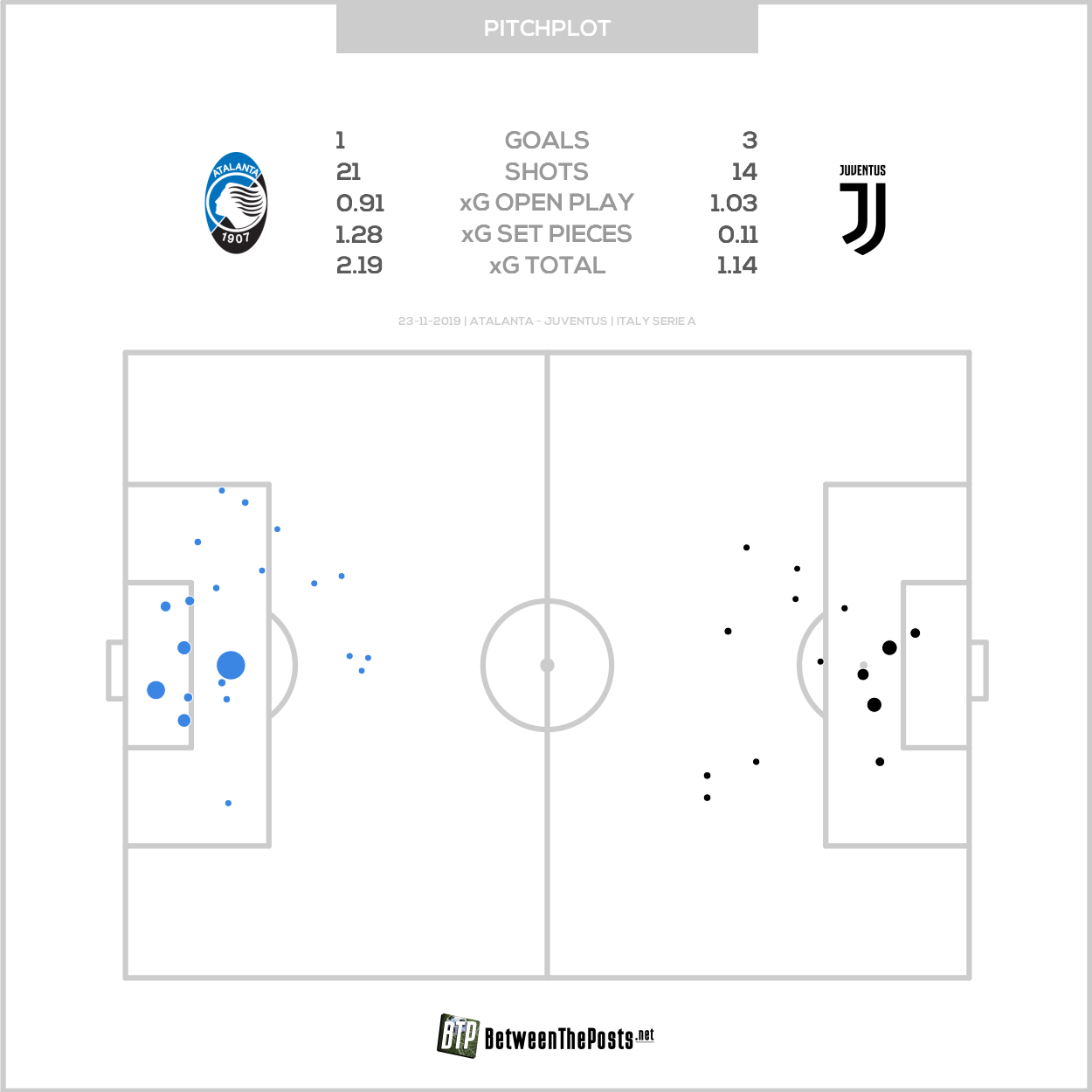 When considering the chances, Atalanta certainly did not deserve to lose. Looking at the expected goals plot, though, it appears evident how Maurizio Sarri’s changes made the difference from the seventieth minute onwards. Once Emre Can entered the game, Juve finally solved their problems in transition, finding it easier to put to an end to the opposition’s counters before they reached dangerous areas. Consequently, Juve could control the ball and correct the attacking issues that had jeopardized their previous possessions while Gasperini was unable to respond adequately.

When both teams missed key players, the one with the most versatility and individual brilliance came on top, in an encounter that showcased the high level Atalanta’s football has reached, and the versatility that – perhaps unexpectedly, but not surprisingly either given the material at his disposal – has marked Sarri’s start to the season in Turin. 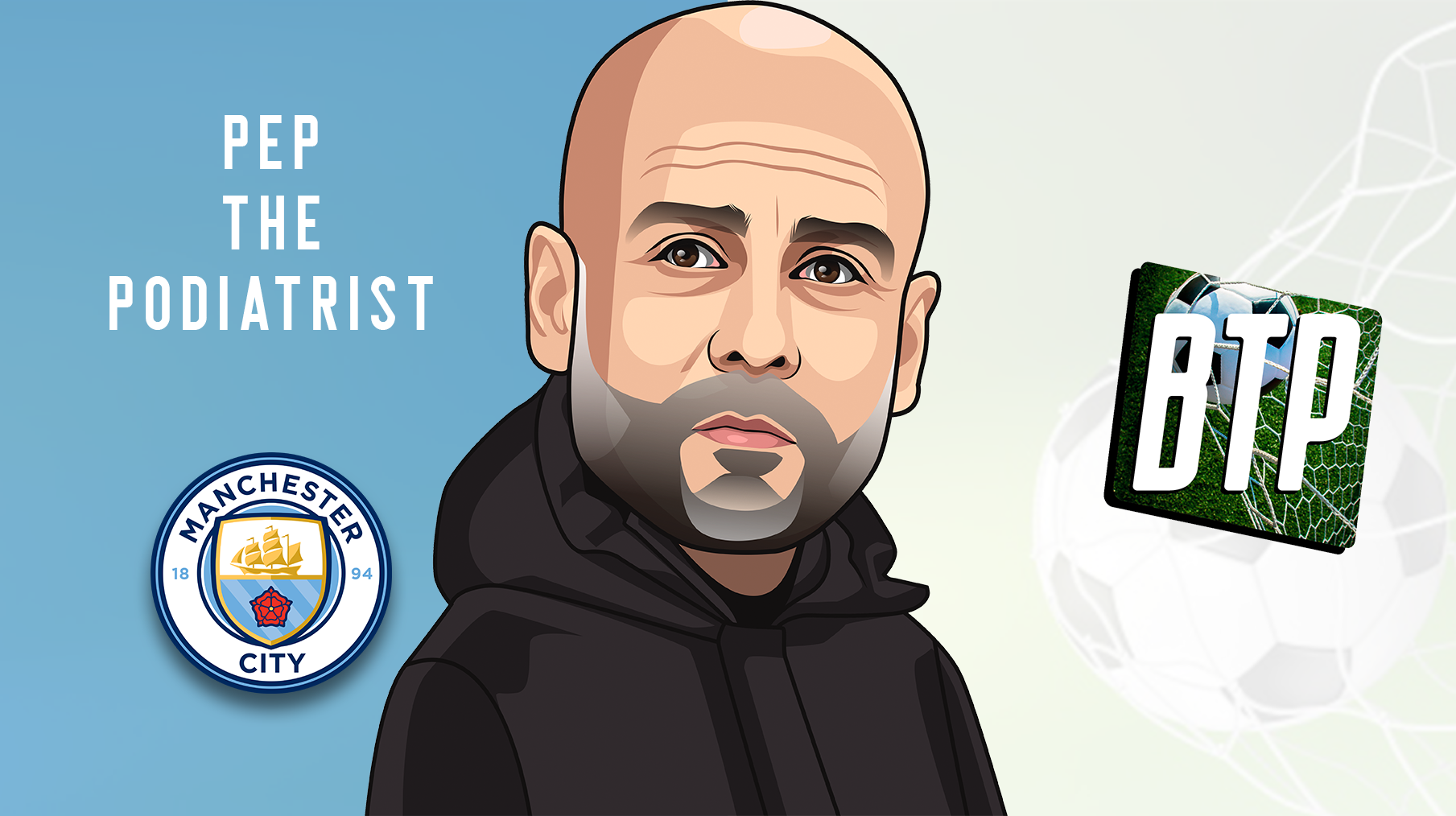 Pep The Podiatrist: Mastering The Management Of Footedness