In a Basque Derby between two opposing styles of play, Athletic forced a technical, possession-based Real Sociedad side into playing long balls, causing aerial duels and fighting over second balls, which is exactly the game Athletic wanted. Despite Real’s substitutions and tactical changes to adapt to this tactical context and become more direct, Athletic still dominated the entire game, reducing Real to only two shots.

It is only Matchday 3 in LaLiga, but it is already time for another face-off between the two great powers of the Basque Country. Real Sociedad and Athletic fans are quite civil off the pitch, mingling in bars pre-game and walking together to the stadium, but the rivalry is quite intense on the pitch. And this time around, it is a battle between two contrasting styles of play.

After a quiet summer in the transfer market, Athletic coach Gaizka Garitano has decided to keep using the simple but effective counterattacking game plan that worked so well last season. Athletic are an intense and organized 4-4-2 team off the ball, capable of both pressing high and defending the box well. In attack, they take on a 4-2-3-1 / 4-2-4 shape, relying on wing play for ball progression as well as counterattacks that utilize the fast and intelligent runs of striker Iñaki Williams.

Under coach Imanol Alguacil, la Real have opted for a playing style based on possession and pressing, aiming to defend as far away from their goal as possible. They use a 4-3-3 shape that follows some positional play principles during the buildup phase, such as interior midfielders closer to the forwards than to the defensive line, or very wide winger positions. As described in this Twitter thread, Alguacil has given newcomer Ødegaard a very prominent role in the team, with key pressing and playmaking tasks.

Athletic’s defense dominates all over the pitch

For this game, Athletic maintained their usual formation, a 4-4-2 shape in the defensive phase, which usually turns into a 4-2-3-1 formation when in possession. However, they made a couple of personnel changes compared to previous games. The goal of Unai Simón was protected by Yeray Álvarez and Iñigo Martínez in the center, with Ander Capa and Yuri Berchiche as fullbacks. Iñigo Martínez returned to the starting lineup after a few weeks of injury. Midfield featured the usual double pivot of Unai López and Dani García with a twist on the wings. Iker Muniain moved from his usual left wing position to the right wing, leaving the left wing to Íñigo Córdoba. Up front featured the usual pairing of Raúl García in his curious number ten role and Iñaki Williams as the lone striker.

Meanwhile, Real Sociedad played with almost the exact same 4-3-3 shape and lineup of the last two matchdays. The only personnel change was the return of defender Diego Llorente to the starting lineup after several weeks of injury. Thus, the goal of veteran Miguel Ángele Moyá was defended by Llorente and Igor Zubeldía in the center, with Aihen Muñoz and Joseba Zaldúa as left and right backs, respectively. Midfield featured the usual trio of Asier Illarramendi, Mikel Merino and Martin Ødegaard. The forward line featured Willian José as the lone striker, flanked by Mikel Oyárzabal on the left wing and Adnen Januzaj on the right.

Real Sociedad’s buildup was completely overwhelmed by Athletic’s pressing, to the point they could not even play out from their goal kicks. Athletic followed a similar pressing scheme to the one they used against Barcelona: they aimed to “cage” the opposition holding midfielder – Illarramendi – and cut his passing lanes to the rest of the team. Striker Williams pushed forward to pursue Real’s central defenders, while Raúl García stayed back and tried to cut the center back’s passing lanes to Illarramendi. Meanwhile, wingers Muniain and Córdoba were in charge of pressing Real’s fullbacks Muñoz and Zaldúa, cutting their passing lanes to midfield and wingers. If Real’s forwards tried to move into deeper zones to support their teammates, Athletic defensive line would follow them.

And similar to Barcelona, Real Sociedad’s underdeveloped buildup mechanisms could not cope with this intense and well-drilled pressing. As we mentioned before, Real have been trying to add positional play elements to their buildup phase, with wingers playing very wide and interior midfielders Ødegaard and Merino playing closer to their forwards than to the holding midfielder. This layout left Real’s defenders and Illarramendi more isolated, with interior midfielders and wingers not dropping deep often enough to collect the ball from them.

Real’s defenders tried to send the long passes to their forwards, who would almost always lose the second ball to Athletic’s defense and midfield. Other times, they tried to bypass the press with lobbed passes towards fullbacks. However, this was all part of Athletic’s plan, a well-thought pressing trap. If the ball got to Real’s fullbacks, Athletic’s fullbacks and wingers would collapse on the opponent, trapping him against the sideline and forcing a turnover.

And the few times Real Sociedad made it past the Athletic press, they were still nowhere near the Athletic goal. Athletic would quickly track back into their orderly 4-4-2 deep block, with the double pivot midfielders scooting over to the wings and forming triangles with fullbacks and wingers to counter Real Sociedad’s possession triangles. This was particularly evident on Real Sociedad’s right wing, where the Zaldúa-Ødegaard-Januzaj triangle (see image below for an example of their combinations in a previous game) was skillfully nullified by the Athletic defense.

Athletic does not do anything too complicated on the ball, but what they do works well for them. Their possessions are quick, always looking for passing combinations between their wing players. Midfielders López, Dani García and Raúl García will often move towards the wings to create passing triangles with fullbacks and wingers that overloaded When one team has more players in a certain area or zone than the other team. a Real Sociedad’s attempts at pressing. Having beat the press, Athletic wing players would either (a) send a pass into space for Iñaki Williams or (b) switch play to the opposite wing to further disorder Real’s defense. These switches of play, for example, helped create the time and space for Raúl García to score his stunning goal from outside the box in the 28th minute. 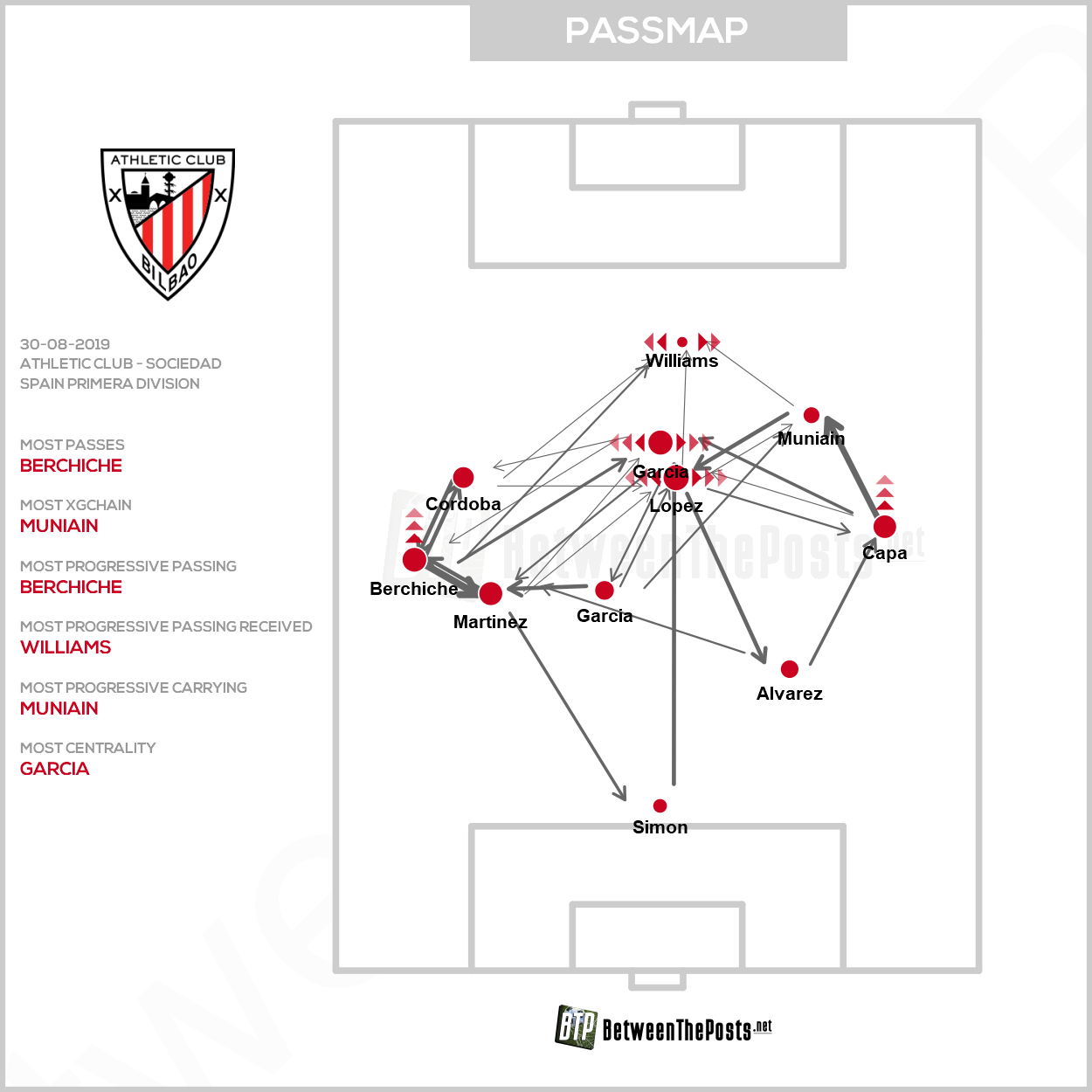 In the 37th minute, Illarramendi had to be substituted due to injury. Coach Alguacil surprised everyone by replacing him with a forward, Cristian Portu, rather than a midfielder like David Zurutuza. The new midfield trio featured Mikel Merino as holding midfielder, while forward Oyarzábal moved to left central midfield. Up front, Januzaj shifted over to the left wing to let Portu play on the right.

These changes shifted turned Real Sociedad into a more direct team, since Oyarzabal and Merino are more aggressive, vertical passers than Illarramendi. However, Merino was as isolated in the holding midfield position as Illarramendi was before, and now Real’s midfield was even weaker physically than before. So Real’s increased directness did little to change the game, since Athletic defenders were still winning most of the second balls and other individual duels across the pitch. At times, the desperate Real Sociedad players just tried to send long balls into space and hoped that the quick Portu could latch on to them, but Athletic’s defenders, once again, came out on top.

In the second half, Portu and Januzaj switched wings, perhaps with the objective of promoting more passing combinations between Januzaj and Odegaard. Didn’t work, since the match was essentially a succession of both teams trading long balls and vertical passes back and forth, with little midfield play and long possessions. In the 55th minute, Alexander Isak replaced Willian Jose. Isak’s more aggressive movements made Real even more direct, and Real started to get better at exploiting the spaces behind Athletic’s defensive line.

Athletic started defending deep and staying inside their own half more often, hoping to close down spaces for Real’s forwards and kill the game on the counter. Coach Garitano substituted Unai Lopez for the more defensive Beñat Etxebarría in the 67th minute, as well as Íñigo Córdoba for the faster Ibai Gómez. Thanks to these tactical adjustments, Athletic maintained the status quo of the first half, with Real Sociedad being unable to crack their opponent’s defense and create a shot. Real’s first shot of the game came at the 83rd minute from outside the box, and only at the very end of the game, in injury time, did they manage to create a good chance from a counterattack that Odegaard finished and keeper Unai Simon stopped. Quite an uneventful second half overall. 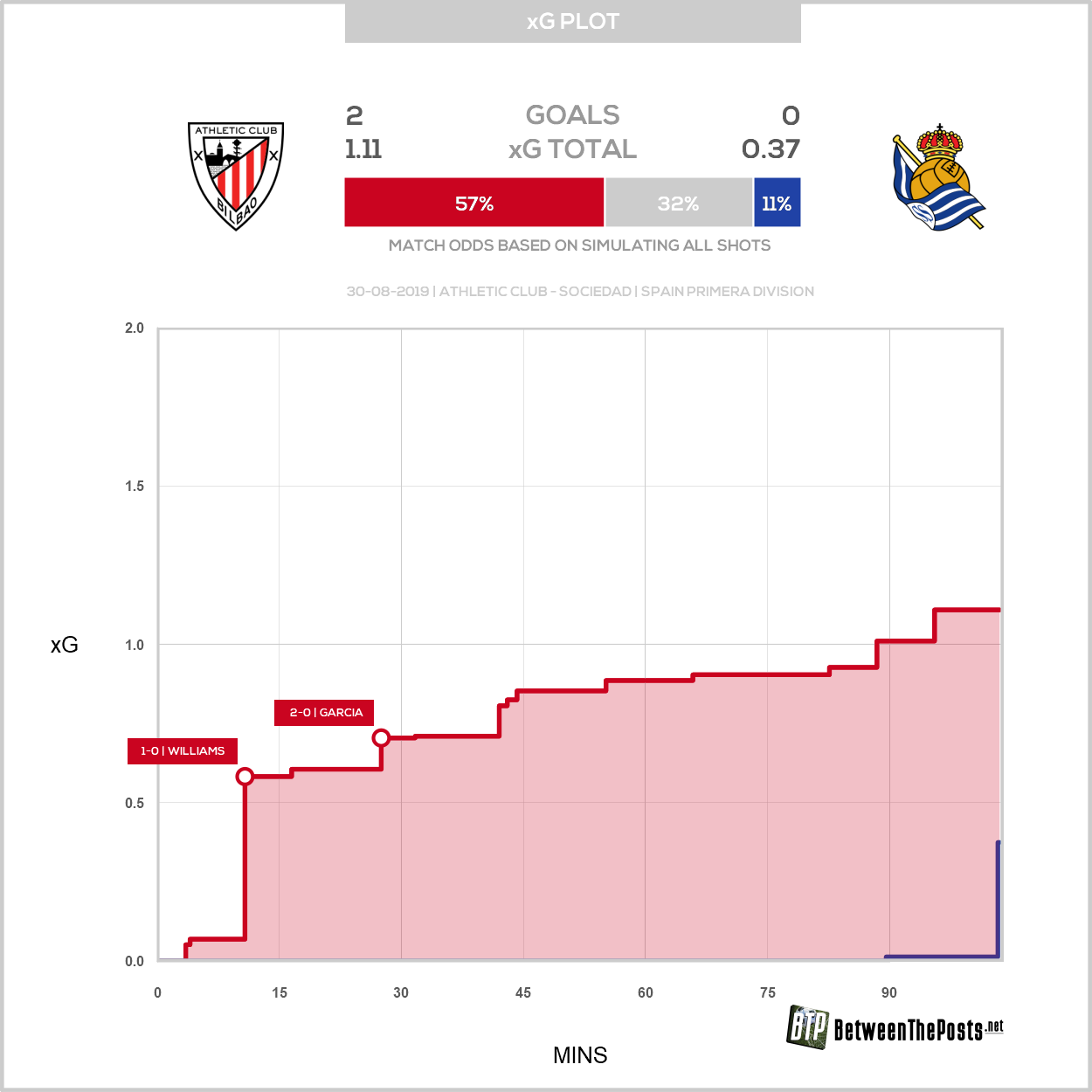 From the first minutes of the game, it was painfully evident that Real Sociedad’s problem would be their lack of physicality compared to Athletic, which would lead them to struggle in a match of long balls, aerial duels and second balls. Alguacil thus decided to give up on controlling the game, replacing a midfielder for a forward and embracing this more chaotic game context.

However, we can rightfully ponder whether this was the right decision. Given their player strengths and weaknesses, Real Sociedad were never, ever going to beat Athletic in a game of chaos and physicality. Perhaps it would have been better for Real Sociedad to strengthen midfield instead and keep trying to impose their possession-based style of play.

As for Athletic, our only conclusion is the same one we had after the Barcelona game: “keep doing what you’re doing, man”. While other teams in the league are still figuring out their game plans, Garitano’s Athletic already have theirs, and it works quite well, especially against possession-based sides like Barcelona or Real Sociedad.