The Basque Derby at the San Mamés Stadium was surprisingly won by Real Sociedad, who missed almost a third of their squad due to injuries and suspensions. Their defensive approach turned Athletic’s attacks into a predictable and easily defended festival of crosses into the box.

The Basque Derby remains curiously calm off the pitch, with fans of Athletic and Real Sociedad mingling with each other in bars before walking together to the stadium. On the pitch, however, the rivalry is as intense as in any other derby, and yesterday’s face-off was no exception.

New Athletic manager Eduardo Berizzo has quickly gotten his team’s Bielsa-esque pressing system up and running, as well as built an offensive system around star playmaker Iker Muniain. However, this promising project has faced brutal early testing, four of their first six league matches being against last year’s top six sides—Real Madrid, Real Betis, Barcelona, and Villarreal. While fans shouldn’t be too worried that their team only won one of those first six games (1W-4D-1L), they certainly hoped to get a good result against their local rivals.

Real Sociedad also has a new manager in Asier Garitano, who is moving the team from their previous possession system to something more focused on defense and counterattack. The team is getting better at defensive focus and intensity as well as setting pressing traps—as their match against Barcelona showed—but the offensive system is still a work in progress. For now, Real Sociedad struggles to counterattack as a unit and still depends a lot in the individual inspiration of their attackers, such as winger Mikel Oyarzábal, striker Willian José, or playmaker Rubén Pardo.

Athletic lined up under a nominal 4-2-3-1 formation, although their shape often changed into a 4-4-2 when pressing due to their unique defensive system (more on that later). Berizzo had access to his entire squad (no injuries and suspensions) and could thus field his strongest eleven, which includes a double pivot of Dani García and Beñat Etxebarría, Iker Munian and Markel Susaeta on the wings, as well as the industrious Raúl García behind winger-turned-striker Iñaki Williams.

Real Sociedad was the complete opposite case. Seven squad players are injured or suspended, forcing Garitano to field an unusual starting lineup. Andoni Gorosabel started at right back (instead of Joseba Zaldúa), Raúl Navas at center back (instead of Diego Llorente), Kevin Rodrigues at left back (instead of Theo Hernández), Luca Sangalli on the wing (instead of Mikel Merino or David Zurutuza). Strangely enough, Garitano preferred to start striker Jon Bautista instead of Willian José, which was a purely tactical change. This curious Real Sociedad lineup featured a total of nine youth academy products, which even the most Athletic Club fans will have to appreciate. 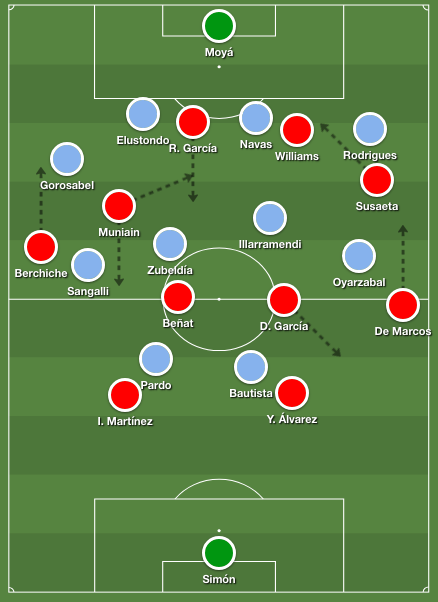 Breaching the Real Sociedad wall
Berizzo’s teams use a man-to-man pressing system inspired by the ideas of his mentor, Marcelo Bielsa. Due to these man marks, Athletic’s nominal 4-2-3-1 morphed into a 4-4-2 to adapt to Real Sociedad’s 4-4-1-1 shape. Raúl García and Williams pressed Real’s center backs, Muniain and Susaeta worked on the fullbacks, while Dani García and Beñat tried to at least cut off the passing lanes of Real Sociedad’s double pivot. Athletic’s defenders mark very aggressively, often resorting to tactical fouling, and against their local rivals they were even more aggressive than usual. The referee had booked five Athletic players by the end of the first half.

Athletic’s possession game is unfortunately not as well developed as their pressing system. The team is yet to develop solid collective mechanisms in this area, and they depend heavily on the guidance of their two most creative men on the ball, Dani García and Muniain. To contain them, Real Sociedad maintained a compact and narrow defensive structure that prevented the two Athletic playmakers from passing through the center. These efforts were led by the defensive intelligence of Asier Illaramendi and 21-year-old Igor Zubeldia, two of the best defensive specialists in the league.

Left without passing alternatives, Dani García and center back Iñigo Martínez were forced to pass wide to fullbacks and wingers or use long balls to Williams and Rául García, and that’s exactly what Real Sociedad wanted. If an aerial pass was aimed for Williams and Raúl García, most of the times center backs Elustondo and Navas would win the ensuing duel. If the ball traveled to the wings, Real Sociedad’s wide players would crowd the Athletic attacker and aim to quickly steal the ball from him. And even if Athletic fullbacks and wingers managed to beat their defenders, their only choice was to cross into the box, where once again Elustondo and Navas awaited. The Real Sociedad center backs accumulated an outstanding total of 18 clearances throughout the game.

With Athletic shut down, Real Sociedad only had to wait patiently to recover the ball and launch counters through the speed and skill of Sangalli—who had an inspired night—and the creativity of Rubén Pardo, who moved from one side to another completing passing triangles. Or even better, they could just wait for Athletic defenders to make mistakes, which is what happened in Real Sociedad’s first goal. When defending a set piece, Iñigo Martínez lifted his foot with excessive force and aggression, incurring in a foul against Sangalli that led to a penalty kick scored by Oyarzabal.

Outraged by the situation of their arch rivals leading 1-0, two minutes later Iker Muniain turned the tables with an instant of game-breaking skill. He cut through Real Sociedad’s defense through dribbling and quick passing with Williams and Raúl García, loaded the box to receive a cross (which ultimately came to him from a lucky bounce off a defender) and scored the goal he himself created. 1-1.

Despite Muniain’s heroics, the status quo of the match continued: Athletic predictably attacking on the wings and crossing into the box, and Real Sociedad clearing the crosses and trying to launch counterattacks.

The impotence of Athletic and the supremacy of Igor Zubeldia
Two minutes into the second half, Real Sociedad would land a lethal hit on Athletic’s ambitions. They pressed the home team aggressively, and ultimately lured left back Berchiche into a pressing trap on the wing, pinning him against the sideline and cutting off his passing options. Igor Zubeldia stole the ball, completed a stunning 30-meter dribbling run and delivered a pinpoint cross for Sangalli to cap off the exquisite move and score a decisive goal to give the visitors the lead again. 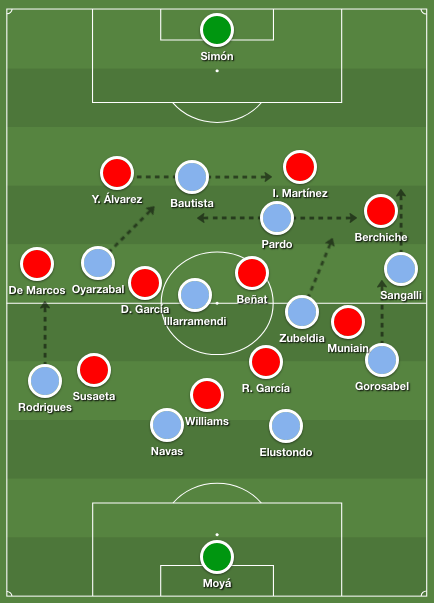 Athletic tried to react to this unexpected punch, but the team’s ideas on how to attack Real Sociedad’s defensive block were not any better than in the first half: more passes to the wings, more crosses. And to make matters worse, an inspired Zubeldia spent the rest of the match making sure Muniain would not break the center of Real Sociedad’s defense like he did in the first half. A masterclass on defensive positioning, body orientation and intelligence from the young midfield prospect.

Berizzo tried to react by substituting Raúl García with veteran goal scorer Aduriz and a tired Oscar de Marcos for Ander Capa. Different players, same results, as the overall flow of the match was not affected. In the 73rd minute, Athletic Club’s center back Yeray Álvarez misplaced a pass when pressed by striker Bautista, forcing Unai Simón to foul the Real Sociedad striker in the box. Another penalty kick by Oyarzabal, who had no problems in putting the 1-3 on the scoreboard.

Athletic finished the match with 35 crosses and 11 corner kicks, but only 5 shots on target, while Real Sociedad defenders accumulating a grand total of 38 clearances and 17 blocked crosses. 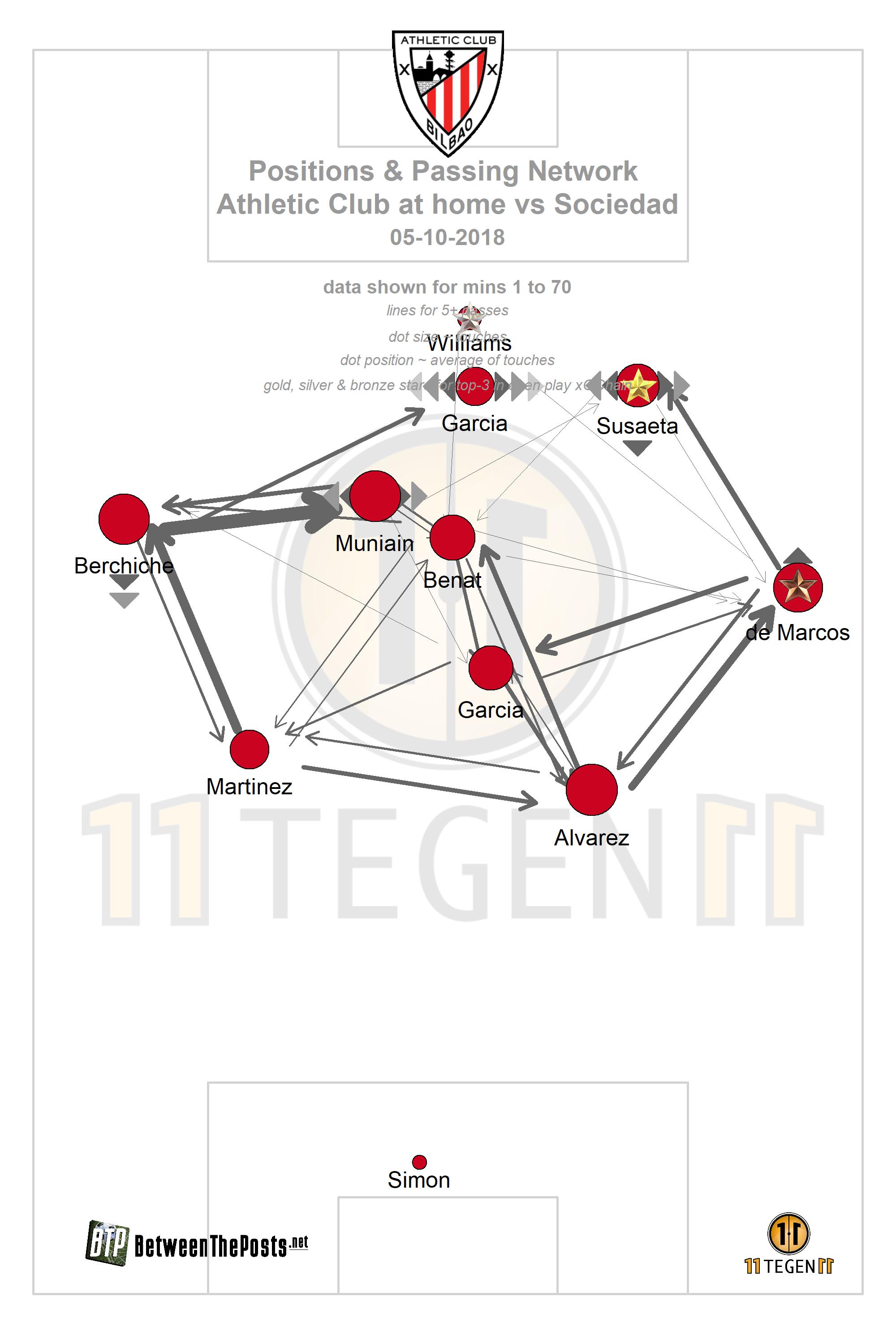 Takeaways
This is probably the most painful defeat of this early season for Athletic. Unlike the matches against the top six, Real Sociedad was not a superior opponent in terms of individual talent. They had most of the initiative and possession but could never find alternative ideas to breach a compact, narrow defense. Besides, the team’s intense pressing game often leaves Athletic men exhausted for second halves, which has allowed four different opponents—Real Madrid, Betis, Barcelona and now Real Sociedad—to stage second-half comeback draws or wins.

As for Real Sociedad, this was an unexpected yet tremendous victory that was born out of intensity, defensive intelligence and the tactics board of Asier Garitano. On the offense, they are generating very few chances and shots, and their counterattack structure is not yet mature. However, it’s impossible to not praise their focus and composure to capitalize on every big mistake of Athletic defenders, as well as shut down Athletic’s progress in the center lanes (especially Muniain). This is a huge step that gives players and fans more confidence than ever in Garitano’s tactical ideas. 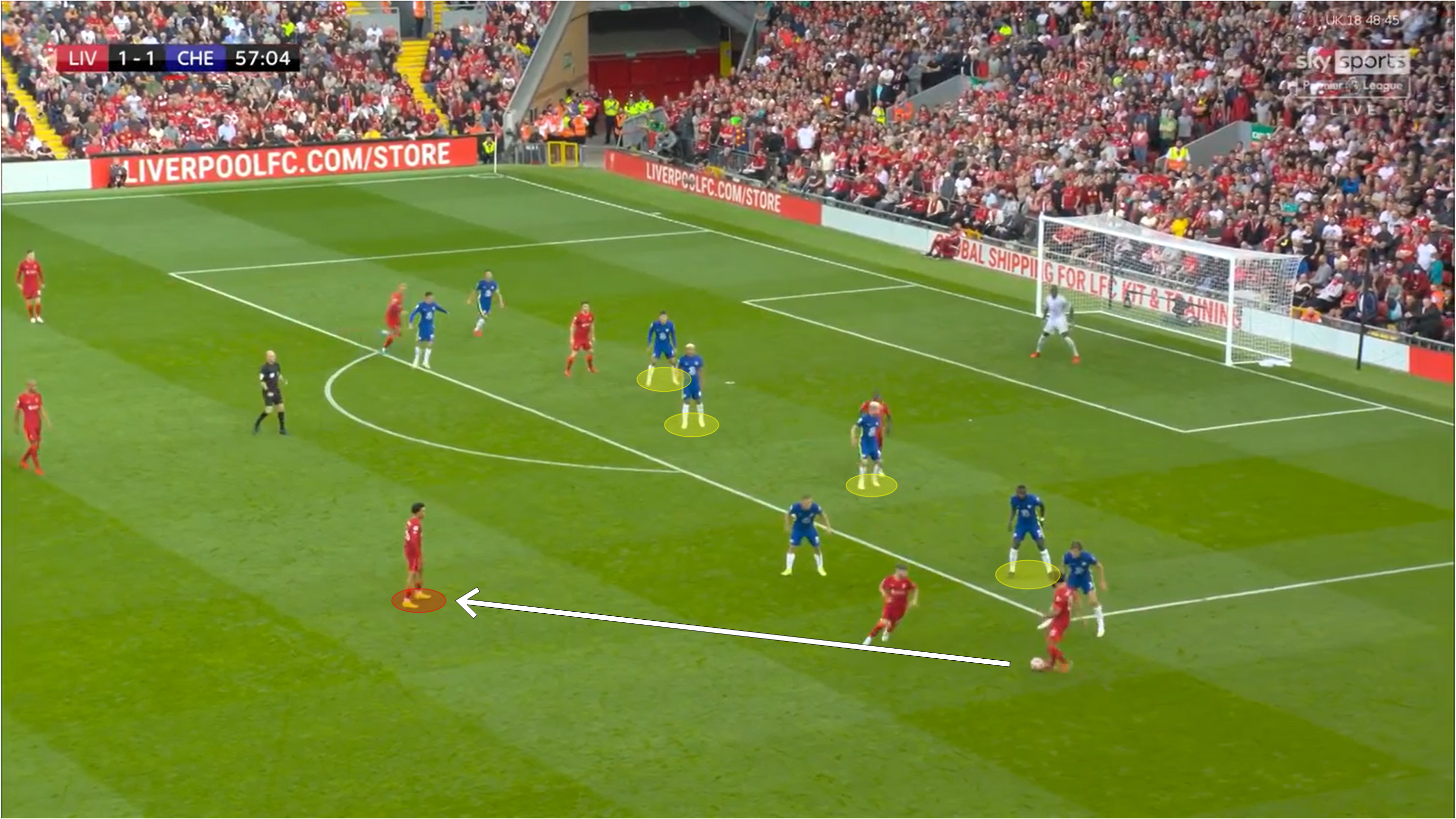