Thanks to clever tactical and strategic work by both teams, key areas opened up in front of the defense for both teams. In the end, Atlanta’s line-breaking openings managed to carve through LA Galaxy.

Despite their strong league positions in their respective Eastern and Western Conferences, the head coaches of either side have come under an increasingly heavy spotlight recently – in particular, Atlanta’s head coach Frank de Boer.

Recent comments from Leandro González Pírez sparked much debate due to his slight criticisms of de Boer’s defensive setup, as well as the lacking communication at the back. Although this fire was swiftly hosed down, it does not take away from the fact that the Dutchman’s playstyle has come under significant interrogation.

The argument against de Boer was no doubt strengthened by the other Los Angeles-based team putting four past them within the space of twelve minutes last week to secure a 4-3 victory. Still, with numerous LA absentees – and the fact that they themselves suffered defeat whilst conceding four goals – Atlanta could be confident of a return to winning ways.

Frank de Boer stayed true to the back three setup that he put out last week but with a handful of changes – four in all. Pírez was left out and replaced by Florentin Pogba on the left of the defensive trio, further ahead Justin Meram was another winger-turned-wing-back and in the middle Jeff Larentowicz and Ezequiel Barco took over from Eric Remedi and Emerson Hyndman.

LA were slightly worse for wear as they were without Zlatan Ibrahimović and left back Diego Polenta because of a suspension. The absence of a fourth attacker forced Perry Kitchen to come into the side and Carlos Antuna to assume the center-forward role, as he, Fabio Álvarez and Sebastian Lletget helped to pertain a 4-3-3 system instead of a 4-2-3-1 one.

Chaotic opening swings the tide in both directions

The first quarter of the match was filled to the brim with end-to-end chances, providing an insight into why these two sides concede so many goals. To begin with, the problems laid with Atlanta, who were being opened up by the visitors multiple times.

LA’s 4-3-3 shape often transitioned into a 3-4-3 setup in possession, as Kitchen dropped back to make up for the isolated center left by the fullbacks’ wing-back-like positions. This allowed the wingers to narrow themselves and attack the center. Lletget lingered more towards the flank, whereas Álvarez was very much a central figure, just off of Antuna; he was undoubtedly the biggest threat to the hosts. His moves deep and across were hard for Franco Escobar to track all the way, and since he could not follow him, it left the attacker free between the lines on so many occasions.

What helped find access into him was how isolated the midfield pairing of Atlanta was. With no positional support from the three attackers, they were run ragged. On switches of play, the inside forwards found it easy to receive the ball inside away from any pressure. Because the home side’s midfield was always having to move up and down and side-to-side, they were constantly exposed to Álvarez’s blind-sided movements. Consequently, these threats enabled the very deep and wide attackers to get Antuna in behind.

This was the case in the fifth minute, albeit stemming from an Atlanta buildup passage from out the back. Pressing man-for-man in this case, they were first to the second ball following a longer, aerial pass out. After regaining possession, Álvarez was instantly available through the center, where he then had time to get his head up and feed through Antuna’s diagonal run in behind. What came of this was a poked effort that Brad Guzan could comfortably deal with.

5′ | Antuna with the best chance of an exciting start to the match 👀#ATLvLA | @FOXSoccer pic.twitter.com/3PR2rln0AF

The hectic start was quickly settled down by some steady possession spells for the home side. It was easy pickings carving through the away side’s shape, too.

LA’s defensive shape tossed and turned between a 4-1-4-1 formation and a 4-1-2-3 layout. What was true of either of these setups was their inability to account for the blind-sided threats posed by Barco and Pity Martínez. The big issue for LA was that they were so reactionary in their defensive actions. As the advanced central midfielders tried to mark out Atlanta’s two holding midfielders when possible, it left the halfspaces If you divide the field in five vertical lanes, the halfspaces are the lanes that are not on the wing and not in the center. Because there is no touchline like on the wing, players have the freedom to go everywhere. But this zone often is not as well-defended as the very center. This makes it a very valuable offensive zone to play in and a lot of chances are created by passes or dribbles from the halfspace. completely open, as the pairing were not positioned in a flat and evenly distributed line.

Darlington Nagbe was always just diagonally ahead of Larentowicz, ready to push on into the next line. Resultantly, this drew the far-sided LA midfielder across, leaving a huge gap on that same side since the wingers were fixated on only covering the wide center-backs and wing-backs.

So, when Atlanta shifted it across their back line, the lanes into either inside forward – whose positions were held open by the height of the wing-backs’ positions as well as Josef Martínez’s occupation of the center – were completely open. The typical move was to have either wide center-back play straight forwards into the attackers, then they attempt first-time combinations with one another to get the initial attacker back on the front foot. 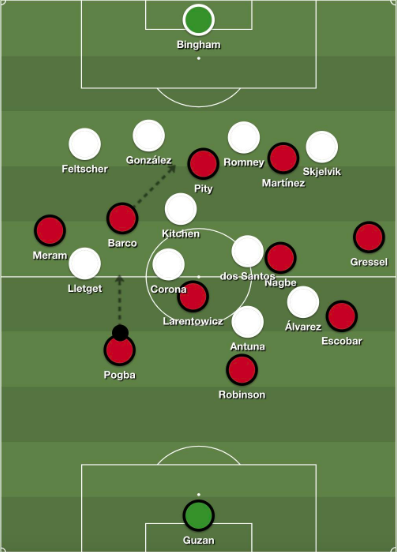 What helped to capitalize on the attacking opportunities created through this access, was the fact that they were inverted attackers. So, when either one received, they were comfortable either flicking it through the middle or making an instep against the grain and helping move it quickly back across to exploit the five-versus-four overload When one team has more players in a certain area or zone than the other team. against the last line.

This was perfectly captured in the fifteenth minute, when LA’s midfield and attacking players were exposed by the far-sided diagonal access into Pity down the right halfspace, as they were caught reacting to only the movements of the players in front of them. Pity then stepped back across using his stronger side to find Martínez, whose shot from range was not enough to challenge David Bingham between the sticks.

LA still had their part to play, though. Five minutes later, they got Antuna in behind once again, as a switch to the right gained access into Lletget on the sides of the Atlanta midfield. As Lletget now had time to pick his pass, he floated one in to find another Antuna run where Robinson missed the ball as it fell to the Mexican, but he also failed to make clean contact. 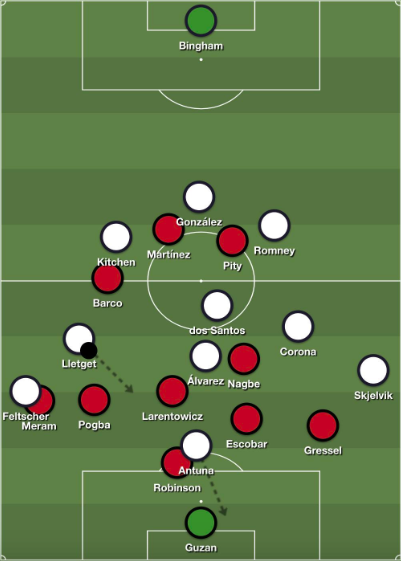 Lletget with time away from the midfield to pick out an isolated Antuna run.

It was only a matter of time before either team scored, and it was Atlanta who took first blood. Another textbook move consisting of Barco receiving in the same pocket, except from out the back, as Joe Corona failed to get his head up to spot the threat between the lines. Then, in dynamic fashion, Barco swung it across for the overloading run of Pity on the far side, who was in the vacant left-back position due to Jørgen Skjelvik’s high positioning. As the Norwegian defender recovered, Pity squared up to him inside the box, took it on the outside and drilled it across only for David Romney to turn it into his own net.

Twenty minutes later and the same occurred again. The LA midfield completely detached from one another. Robinson stepped out with the ball, the midfield five were stretched but were then opened up by Kitchen’s decision to drop back and mark Pity. This left a huge vertical gap between the holding midfielder and the two advanced central midfielders. What came of this was an easy ball through to Martínez’s rotated inside left position. He moved it wide to Meram, whose brilliant, whipped, low cross was turned in by the other LA center-back this time – Giancarlo González.

There was little that could be said of the second period, really. The two-goal lead took the wind out of LA’s sails as their attacking moves – despite still managing to work it into Álvarez inside ‘the hole’ on numerous occasions – were severely lacking a clinical edge in the final product.

As Nagbe took on the ball behind the LA central midfielders in the sixty-ninth minute, he freely played it wide to Julian Gressel down the right. A clever first time ball just off the back of the retreating LA defense managed to find Martínez, who dug out an effort that was saved but fumbled by Bingham. On the rebound González got across to substitute Hyndman without winning the ball, and although this was not penalized at first, upon VAR review, the referee awarded Atlanta a penalty, where Martínez made no mistake hammering the final nail into coffin.

An enthralling first half was filled with incisive attacking tactics but also with glaring defensive issues. In the end, de Boer’s side deserved the win which took them to the top of the Easter Conference table. LA, meanwhile, are comfortably within the seven Championship playoff spots. DC United awaits them. For Atlanta, they must contend with an Open Cup tie against Orlando City on Wednesday.

Highlights from our victory over LA Galaxy! pic.twitter.com/tu0gkEb39J 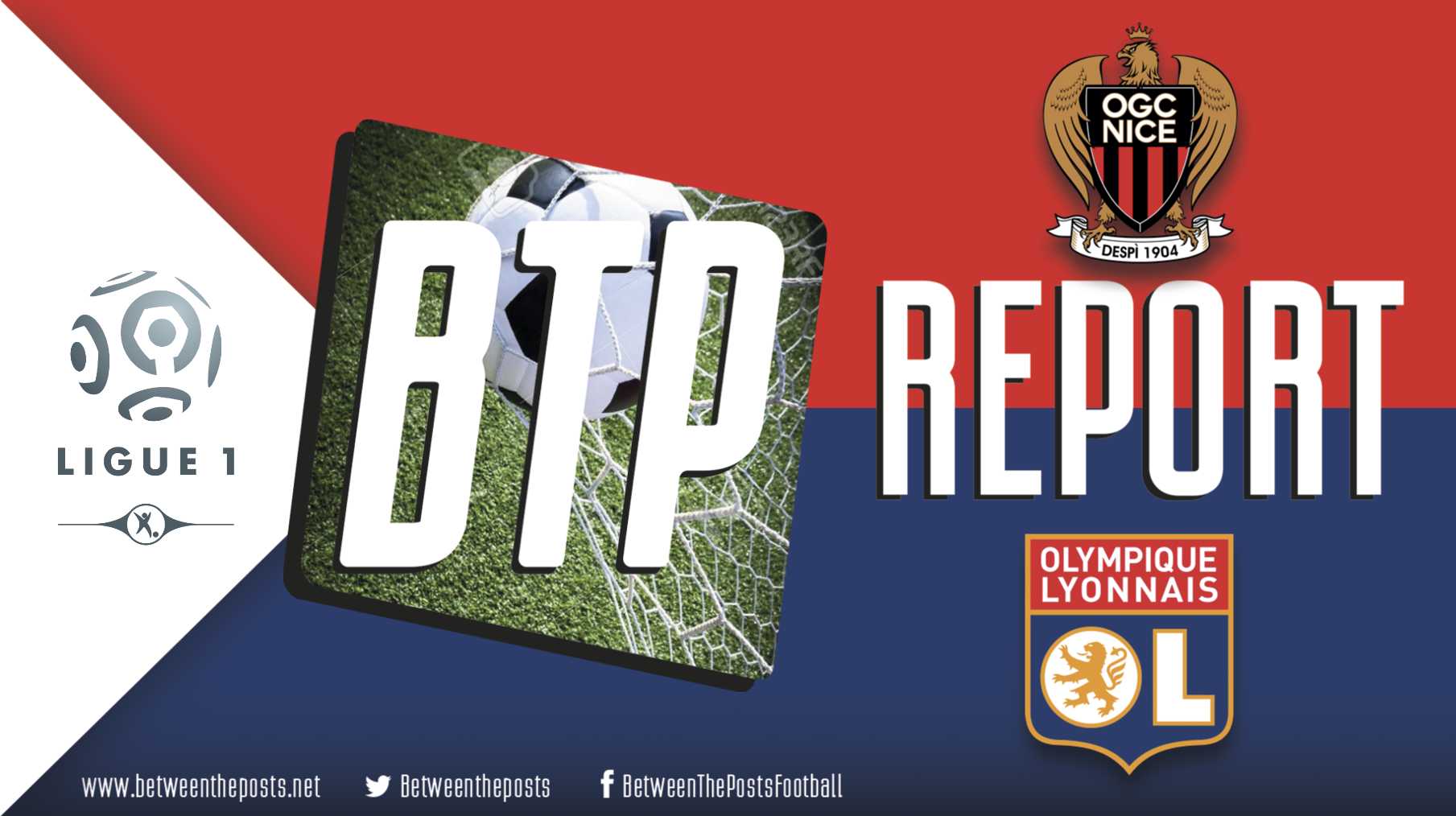 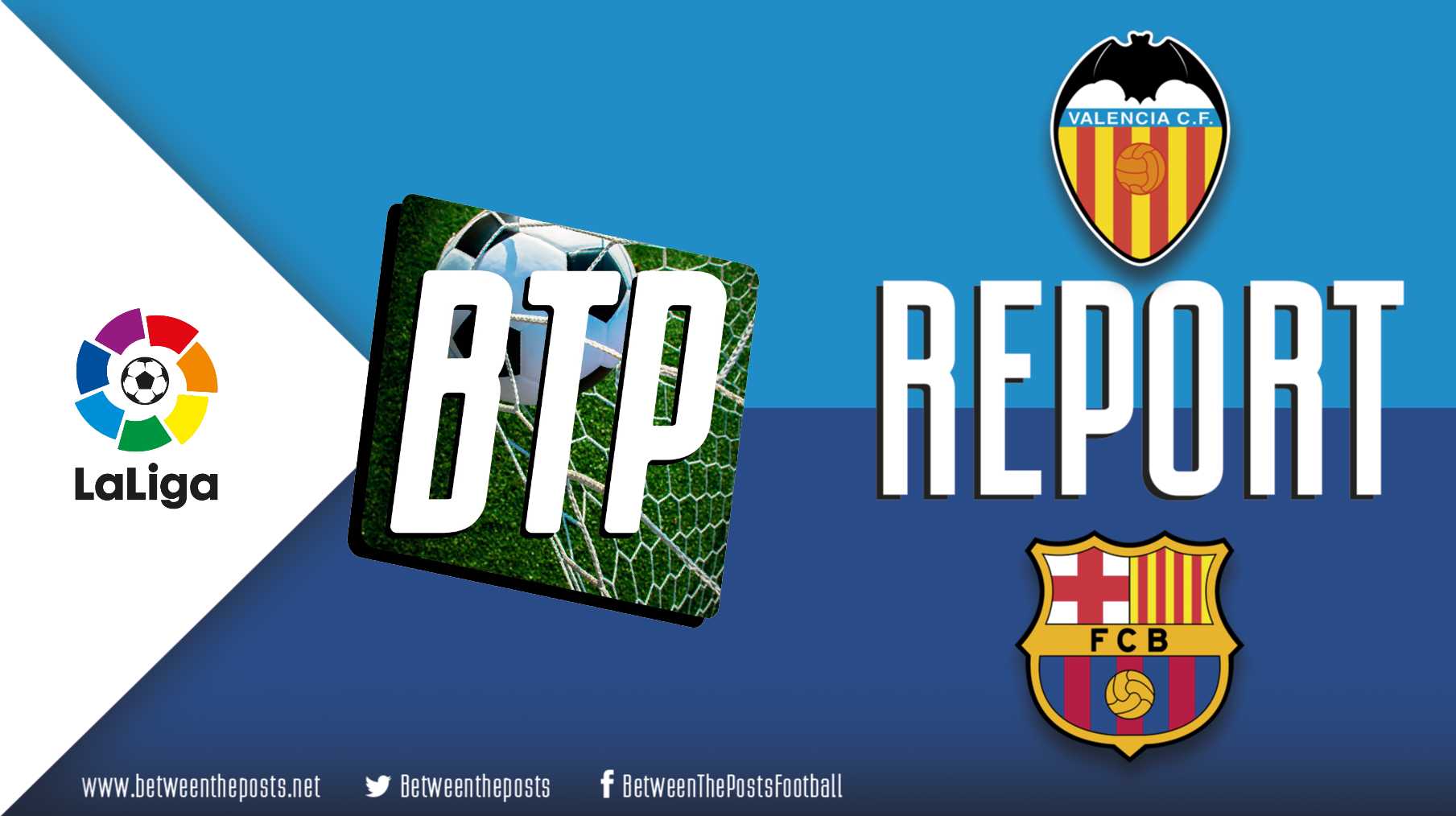