Amidst a calamitous ninety minutes of nearly non-stop injuries, Atlanta and New York tussled until the end in what was as much an interesting tactical battle – featuring intense pressing formations and direct plays – as it was a toss-up between two MLS rivals.

Atlanta have failed to beat New York Red Bulls on every occasion aside from in the MLS Playoff semi-final last year, on route to winning the MLS Cup. Sitting two points apart at the top end of the table, a win could lift either side into second place with two games in hand on first-placed Philadelphia Union.

In light of this opportunity – and considering Atlanta’s 5-1 drubbing away at Chicago Fire in midweek – manager Frank de Boer made a total of five changes. Florentin Pogba was given a starting role in the center of defense due to Leandro González Pírez’s sending off. Elsewhere, top scorer Josef Martínez – back from the Copa América – took Brandon Vázquez’s place up front, whilst Eric Remedi and Justin Meram were restored to the starting eleven as well.

Surprisingly enough, Chris Armas’ Red Bulls were also subject to a four-goal deficit in midweek, against Houston Dynamo. He made four changes. Michael Murillo’s suspension was catered for by having Kyle Duncan move from left back to right back. Sean Nealis took Connor Lade’s place in the center of defense whilst Andreas Ivan and Tom Barlow were replaced by Daniel Royer and Marc Rzatkowski, as Armas switched from a 4-4-2 diamond to a 4-2-3-1 formation.

New York were hell-bent on trying to go man-for-man against Atlanta from the very start, and did so in very strong and risky fashion.

Whilst the two central attackers split to pick up one of the center-backs and the other cut off the deeper central-midfielder Darlington Nagbe, the two wide midfielders would step up onto the remaining center-back and the ball-sided fullback. When the ball came across to the far side, the higher wide midfielder would sprint onto the defender and, in support of him, New York’s fullback, typically the left back, would follow up in pursuit and up the pressure by marking Atlanta’s right back. With every Atlanta player covered, the ball-holder would have no options and would try to turn inside, where they would be instantly crowded off the ball.

This worked to perfection in the seventh minute when Atlanta’s right-back, Franco Escobar, dribbled inside with no options and was subsequently dispossessed. Thanks to the man-for-man setup, this left an instant three-versus-three attacking situation in front of the box. This only resulted in a pot shot from Alex Muyl, though.

Still, New York continued to suffocate Atlanta. It was all about pressuring the ball-side. They would often create a U-shape When a team has possession on the sides of the pitch and with their own central defenders, this is called a ‘U-shape’, because it resembles the letter U. . in their midfield, so to cramp the space between the lines. And, because the pressure was so intense, Atlanta had no time to try and exploit the gaps on the far side.

It was not just the midfield that pressured well into midfield though, it was also the fullbacks. With the wide midfielders being dragged wider against Atlanta’s fullbacks, New York’s fullbacks were tasked with pressing up onto dropping attackers to close the gap. What also helped this move to become successful were the vertical distances between Atlanta’s center-backs and open midfielders.

When Atlanta went back to their base players, they themselves were moving back to create an option without the rest of the team retreating with them, which just stretched the space between them. So, when they tried to play these passes through the inside channel, the fullbacks had time to get across and intercept. 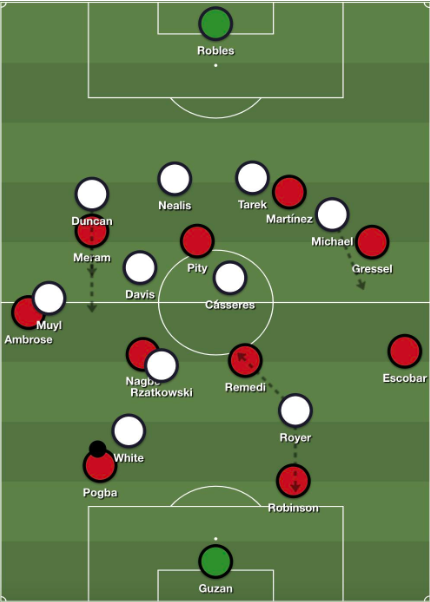 Atlanta struggling to play out against New York’s press.

Armas’ attacking plan also boasted a very defensive mindset, allowing his team to almost willingly give up the ball. In the first half, they attempted the gigantic amount of nine unsuccessful long balls into the left flank. The plan seemed to be in aid of counterpressing After losing possession, a team immediately moves towards the ball as a unit to regain possession, or at least slow down the pace of the counterattack. Atlanta and thus exposing them to dangerous attacking overloads. When one team has more players in a certain area or zone than the other team.

In their attempts to do so, Cristian Cásseres Jr joined up from the midfield double pivot to create a circular shape around the aerial challenger down that side. As a result, they could either claim the second ball back their way, or apply instant pressure to the forward or backward receiver and subsequently force more panicked decisions on the ball.

The issue this left them with was their exposure to counterattacks when the tight-knit shape was surpassed. After all, they only had one player manning the space in front of the defense, so direct balls past the counterpressing shape and into the attackers were not too difficult to come by.

To further exploit the potential openness of their defensive shape, Atlanta frequently left the far-sided wide-midfielder, in their 4-4-2 block, high and wide. More often than not, with New York targeting Atlanta’s right side, Justin Meram was pinning back Duncan on the opposite flank.

In the eleventh minute, when a header bypassed the attacking shape, Julian Gressel’s equally aggressive positioning on the near-sided flank allowed him to knock it across to Pity Martínez. He played it across to Meram, who cut in first time and found himself through on goal where he slotted it neatly past the goalkeeper to give his side the lead from an incisive attacking transition. 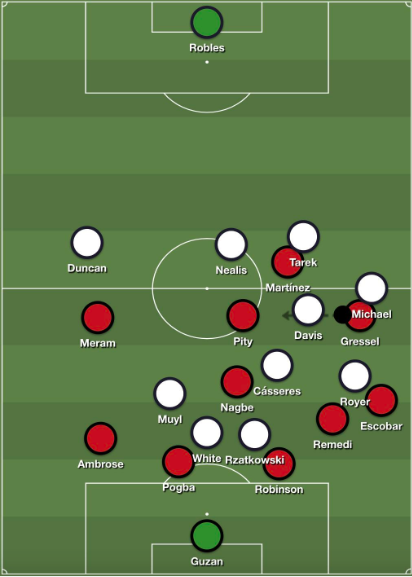 New York find their way back

New York kept doing what they were doing and it finally paid off in the thirty-seventh minute. Having pumped one of their usual long balls down to the left corner, they were able to direct play back to Brad Guzan and into Mike Ambrose, the left back. By luring them into this pressing trap, A pressing trap is a predefined plan to leave a particular player or zone open, to invite a specific pass. Upon a pass to that player or into that zone, a rapid coordinated team press on that player or zone is exerted. where Muyl could make up the ground by the time the ball had reached Ambrose, they could easily pressure him and dispossess him. From there, they worked it across into the same three-versus-three scenario as before, this time Rzatkowski laid it across for Royer, who evaded the pressure well and struck it across Guzan to equalize.

Pocket picked. Final pass. Put it in the back of the net.#ATLvRBNY | #RBNY pic.twitter.com/P9j5fJtpCH

An issue both sides had defensively was dealing with the space in front of the center of their midfield. When the strikers had been bypassed, both sides were guilty of leaving hugely accessible gaps there. Whilst it was less of an issue what with the intensity and compactness of the midfield to begin with, it then became a huge problem in the second half when both teams tired.

The sides returned to the pitch looking dead on their feet in the second half. All of the intensity, organization and compactness that was there before had fizzled away and now both sides were exploiting the midfield gaps for their attacking benefit, especially since both sides continued to keep their attackers high and wide, leaving the vertical gaps even more exposed.

The visitors used this to their advantage to complete the turnaround. Notably, they had switched up their attacking side to focus on using shorter, interchangeable moves, with Armas recognizing that his side did not have the energy to keep up the same vein of intensity.

On this occasion, Royer dropped short from the left wing to receive in front of the midfield, which also drew out Escobar. With the assistance of Cásseres’ overloading run from deep through the middle, Muyl was free in the halfspace and was found by Royer’s first time pass. With him and White both in behind the fullbacks, it was a simple square-and-tap-in job to make it 2-1.

A confusing and chaotic end

Out of relatively nothing, Atlanta found themselves back level following a foul on the second phase of the cleared set piece, when Martínez was foolishly and needlessly tugged back by Duncan. Having done just about nothing all game, Martínez converted the subsequent penalty with ease and put his mark on the match.

With just over ten minutes of regulation time to go, the game began to really stretch itself out. The simplest of transitions were resulting in big chances. Martínez had a chance at the back post when a simple three-pass move down the flank starting with Guzan allowed Meram to square it across, but the striker fluffed his lines. 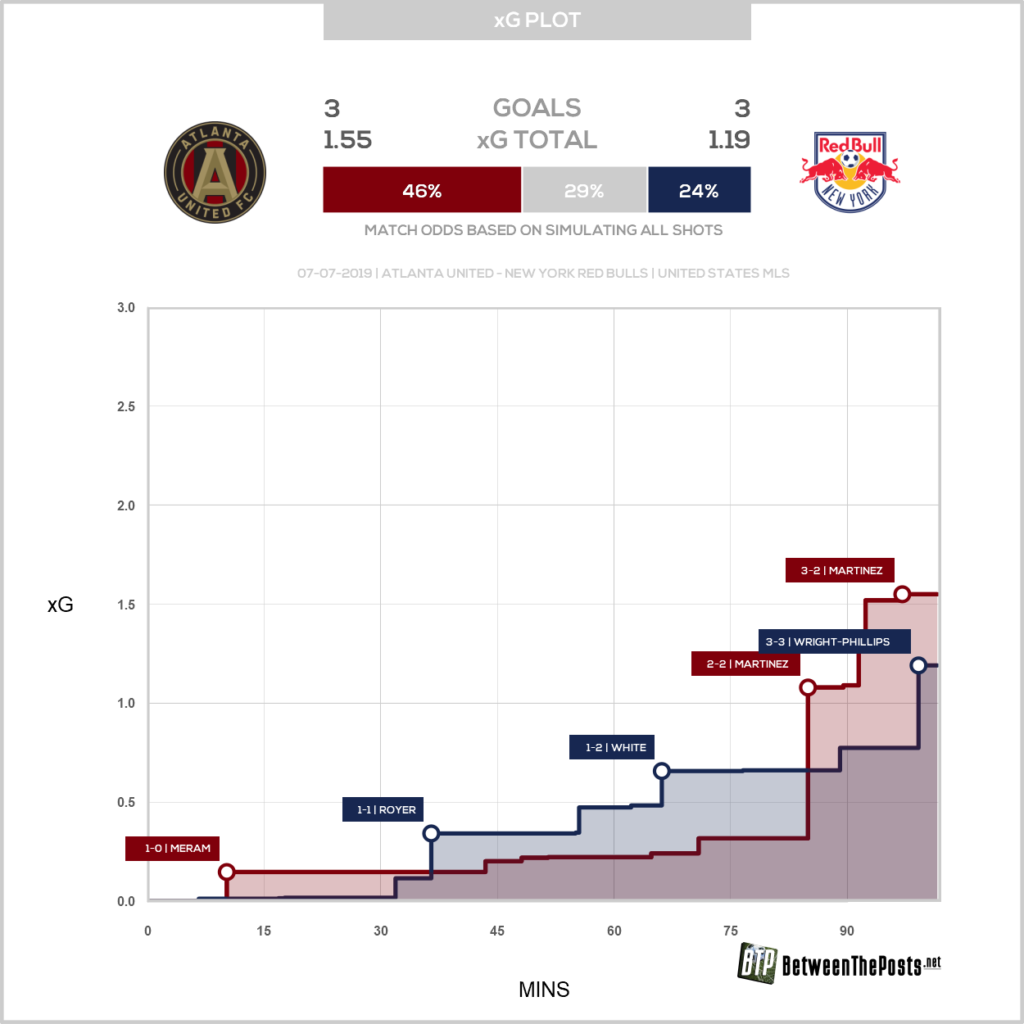 Then came stoppage time, and with it, chaos ensued.

Both sides scored a late goal, both originating from exploiting the gap between the right back and the nearby center-back. In both scenarios, neither center-back was remotely alert to the danger of the ball or their opponent.

First came Martínez’s stunning header before substitute Bradley Wright-Phillips spoiled the party for the hosts by walking onto an unintentional cross as no Atlanta player looked to deal with the loose ball heading the way of the box.

It was all as strange as it was poor, and a comical ending to a frenetic match between two MLS powerhouses.

It is safe to say that the rivalry these two sides have formed is still very much alive and kicking. The damage done through injuries, physical fatigue and also the emotional drainage comes as a result of fixture congestion which are not slowing down anytime soon. These two sides will be thankful that their games in hand could be enough to make up necessary ground on Philadelphia.