Whilst Barcelona may have dominated possession throughout the match, they struggled to create meaningful chances or even test Atlético Madrid goalkeeper Jan Oblak. Their offense was one-dimensional, making it very easy for Diego Simeone’s men to shut them down in the final third and then capitalize through counterattacks.

No matter what kind of form both teams are in, it’s always an entertaining match when Atlético Madrid and Barcelona clash. Atlético Madrid came into the match hot off a comeback win against AC Milan in the Champions League, though they had struggled the previous weekend in LaLiga with a loss to (then) bottom of the table Alavés.

Atlético manager Diego Simeone had an almost entirely fit squad to face Barcelona, with only the injured Matheus Cunha and the suspended Geoffrey Kondogbia sidelined. He opted to switch from the 4-4-2 formation that he utilized against AC Milan for the 5-3-2 formation that he has favored throughout the 2021/2022 LaLiga campaign. Stefan Savić, José María Giménez, and Mario Hermoso started the match as the three center-backs, flanked by Marcos Llorente and Yannick Carrasco. Ahead of them were Koke, Thomas Lemar, and Rodrigo De Paul, with Luis Suárez and João Félix as the team’s two strikers.

Barcelona were entering the match in worse form than Atlético Madrid. They were coming off of a 3-0 thrashing in the Champions League to Benfica, though they had beaten Levante in LaLiga by the same scoreline over the weekend. Barcelona had a thin squad available for the match, with Ousmane Dembele, Pedri, Sergio Agüero, and Martin Braithwaite all out injured, with Jordi Alba and Ansu Fati having just rejoined the squad (though neither were fit enough to start this match).

Koeman – still suspended, but watching from the stands – opted for his side to revert to a shape with four players in the back line, as opposed to the three-man defense that he used against Benfica. Gerard Piqué and Ronald Araújo started in central defense, with Oscar Mingueza on the right and Sergiño Dest playing at left back. From there, however, Koeman drifted from anything he’d done during his time at Barcelona. He played a double pivot Two central midfielders next to each other. midfield of Sergio Busquets and Nico González, with Gavi, Phillipe Coutinho, and Frenkie De Jong ahead of them. Memphis Depay started up top.

Koeman’s use of a 4-2-3-1 formation with inverted wingers against Atlético Madrid was a curious one. It forced all of Barcelona’s width in the final third The one-third of the pitch that is closest to the opposition’s goal. to come from the fullbacks, as the wingers De Jong and Gavi tucked into the halfspaces. If you divide the field in five vertical lanes, the halfspaces are the lanes that are not on the wing and not in the center. Because there is no touchline like on the wing, players have the freedom to go everywhere. But this zone often is not as well-defended as the very center. This makes it a very valuable offensive zone to play in and a lot of chances are created by passes or dribbles from the halfspace.

This helped Barcleona as they tried to move the ball around the final third, but made it very difficult once they reached Atlético Madrid’s defensive line at the top of the penalty area. As one of the wingers, De Jong was now forced to sit on the defensive line to try and make runs into the penalty area and shift Atlético Madrid’s center-backs. If he had played in his normal, deeper role, he could have helped out on the creative front and tried to create chances for Barcelona, but in this role he was nullified. 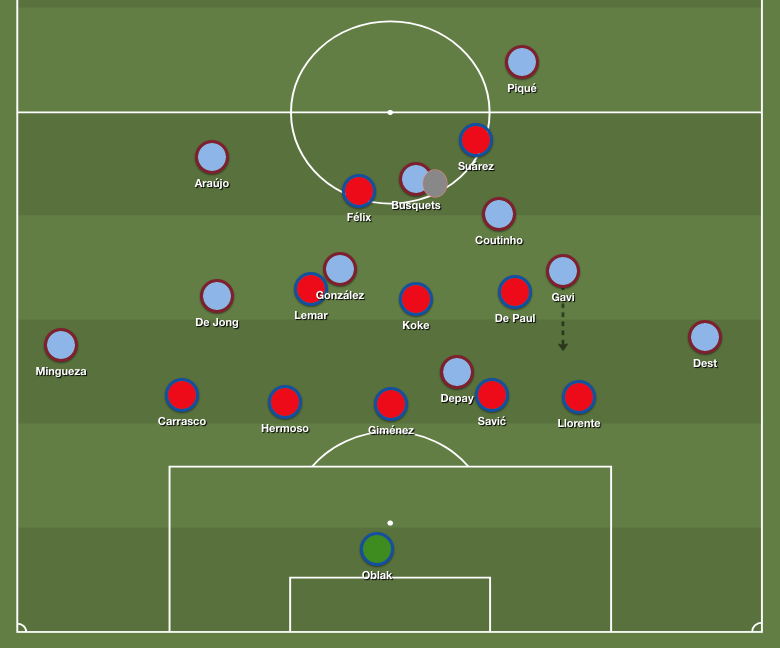 Wingers De Jong and Gavi operated in the halfspaces throughout the first half, though this offered very little to Barcelona’s attack. They didn’t stretch Atlético Madrid’s back line horizontally using the width of the pitch, or even pin the center-backs into exploitable positions.

In a Barcelona attack that was already too reliant on the individual brilliance of Memphis Depay, this made it all the more difficult for Barcelona to be effective in the final third. They had to rely on passes into Depay’s feet or balls to him over the top to create any semblance of a chance throughout the first half. All of Barcelona’s three shots in the first half came from outside of the penalty area, with not a single one testing Oblak.

Midway through the first half, Atlético Madrid struck first blood. They won the ball back in the middle third of the pitch, and quickly found an outlet to João Félix in a wide position. Félix expertly got past Mingueza and Araujo, who had stepped to him quickly. He played a pass to Suárez, who had dropped off from Piqué into space in a central position. Suárez played a diagonal through ball into Thomas Lemar, who was making a run out of midfield that hadn’t been properly tracked by Nico González. Suárez’s pass was perfect, and set Lemar up perfectly to slam the ball over Marc-André ter Stegen. 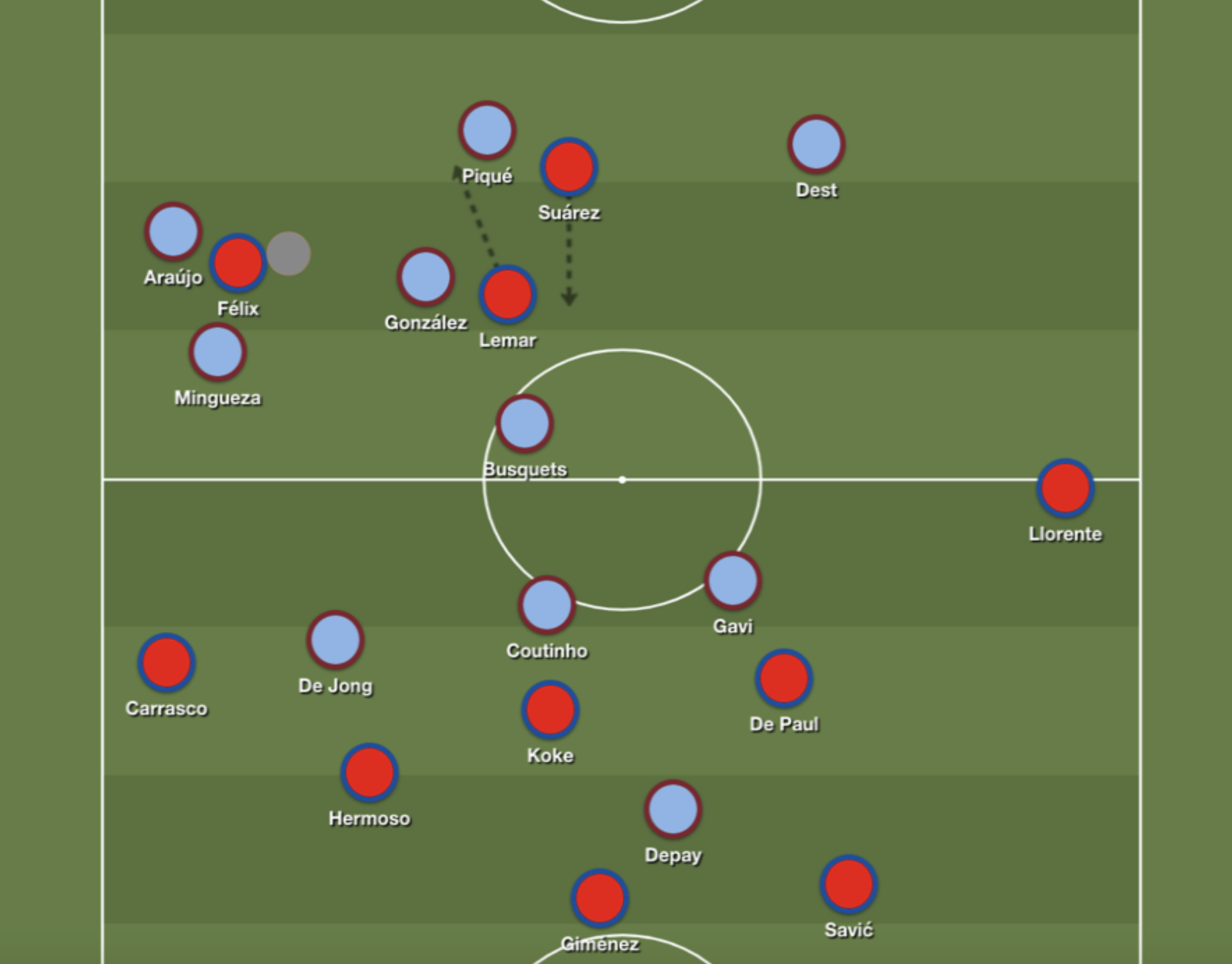 Twenty-third minute: Félix receives the ball in a wide area, initiating a counterattack. He finds Suárez in a central area, who sends a one-touch pass into a streaking Lemar to set up Atlético Madrid’s first goal of the match.

Just before half-time, Atlético Madrid would get their second goal. Félix played Lemar in behind Barcleona’s defense, forcing a two versus one situation with Lemar and Suárez running at a lone Gerard Piqué. Piqué was left on an island between the two Atlético Madrid attackers, and Lemar was able to place a perfectly-lobbed pass to Suárez, who had the time to slow down and compose himself before cooly slotting the ball past ter Stegen.

Barcelona return to a crossing-based attack

From his viewing box, Ronald Koeman made a few changes to Barcelona’s attack just after half-time. He first rotated his three attacking midfielders, moving Coutinho from the middle to the left, De Jong from the right to the middle, and Gavi from the left to the right.

This setup did create Barcelona’s best chance of the match, as Gavi intercepted and then blocked two Barcelona passes, the second of which rebounded, allowing him to breakaway behind the Atlético Madrid back line. He found Coutinho free on the left side, who took two much time on the ball before slamming his shot directly into Jan Oblak.

After sixty-four minutes had passed, Ansu Fati was brought on for Coutinho, and new signing Luuk De Jong came on for Gavi in the seventy-fifth minute. This meant Barcelona returned to their typical 4-3-3 formation, with Frenkie De Jong returning to a central midfield role, with Depay, Luuk De Jong, and Fati playing as the front three.

As Luuk De Jong was brought on, this meant that Barcelona were going to finish the match by trying to cross to the tall Dutchman. Sergi Roberto, who Koeman had brought on just after half-time for Nico González, was the main deliverer, as he alone sent in four crosses after the seventy-fifth minute for De Jong to try and latch onto.

This didn’t work however, as Atlético Madrid packed the vast majority of their team into their penalty area, and Simeone brought on Felipe Augusto to add some height to his back line. Barcelona would only manage one shot after Luuk De Jong was brought in (courtesy of Memphis Depay), capping off a poor performance from Barcelona in front of goal. 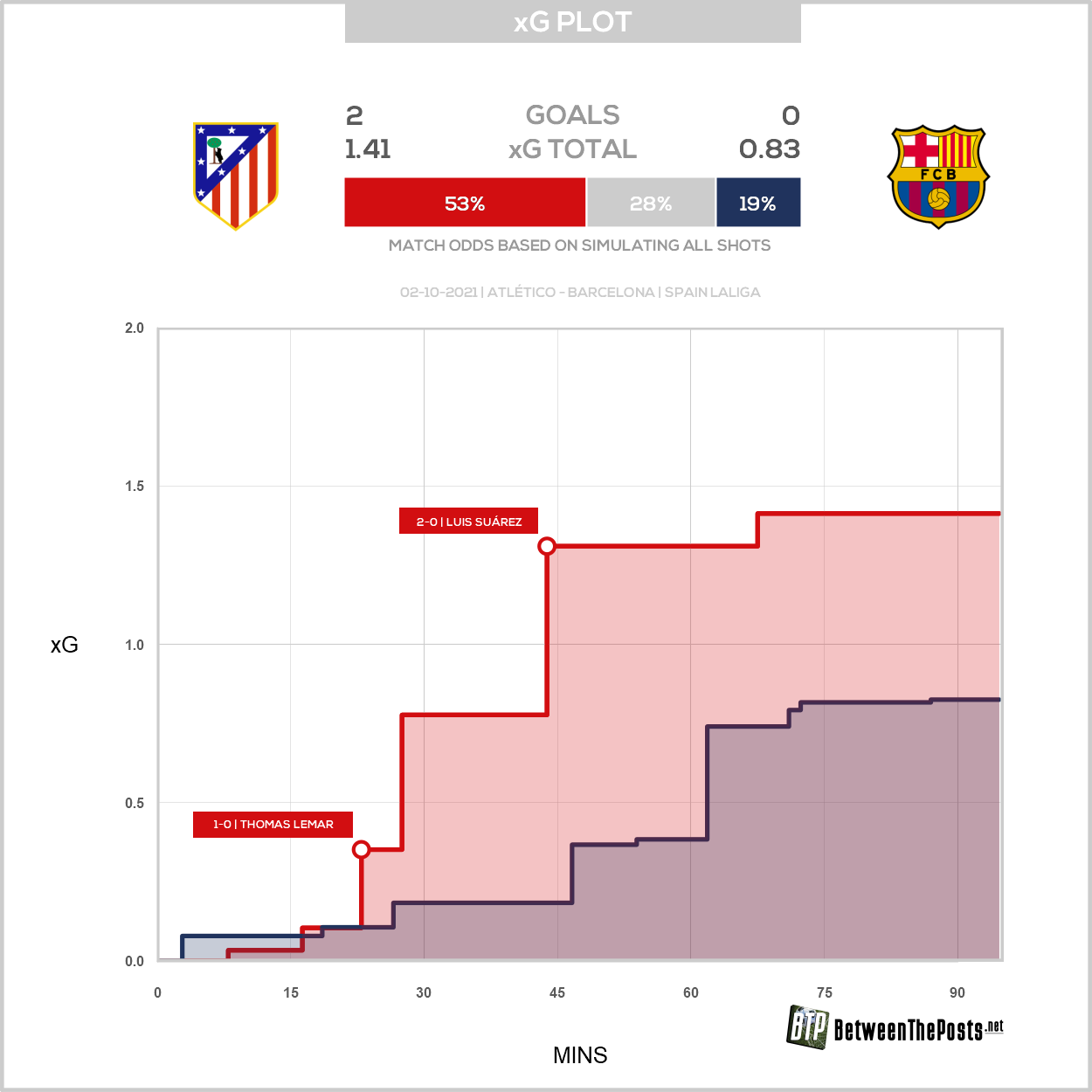 It’s nothing new that this Barcelona squad is struggling this season, and that could be seen against Atlético Madrid. The side lacked creativity on the offensive side and organization on the defensive side of the game, a few bleak motifs from early on this season.

It was curious that Koeman decided to experiment with a new formation this match, especially with the 4-2-3-1 formation that he did, as it doesn’t seem to play to any of his players’ strengths. Koeman will want to sort out some of his issues soon, as he has a tough run of matches coming up. His side faces Valencia after the international break, and Real Madrid in El Clásico on October twenty-fourth.

This win lifts Atlético Madrid back level on points with their city rivals, though Real Madrid have a game in hand as they’re still yet to face Espanyol in Matchday Eight. This match showcased how ruthless this side can be on the counterattack, and how defensively solid that they can be for ninety minutes (not that Barcelona tested them too much anyways). After their slip-up against Alavés, this was the best possible response Diego Simeone could have had from his side. 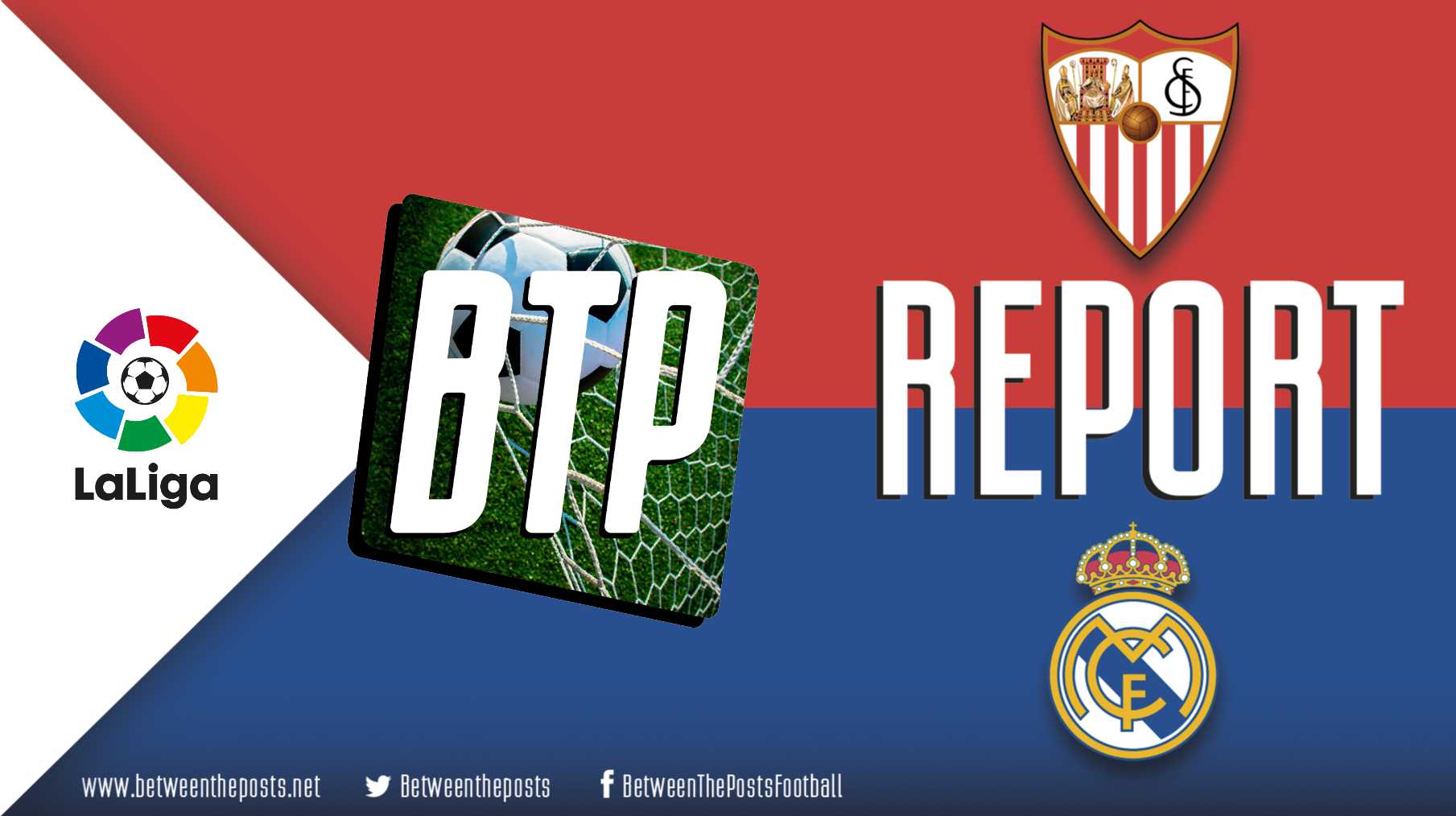 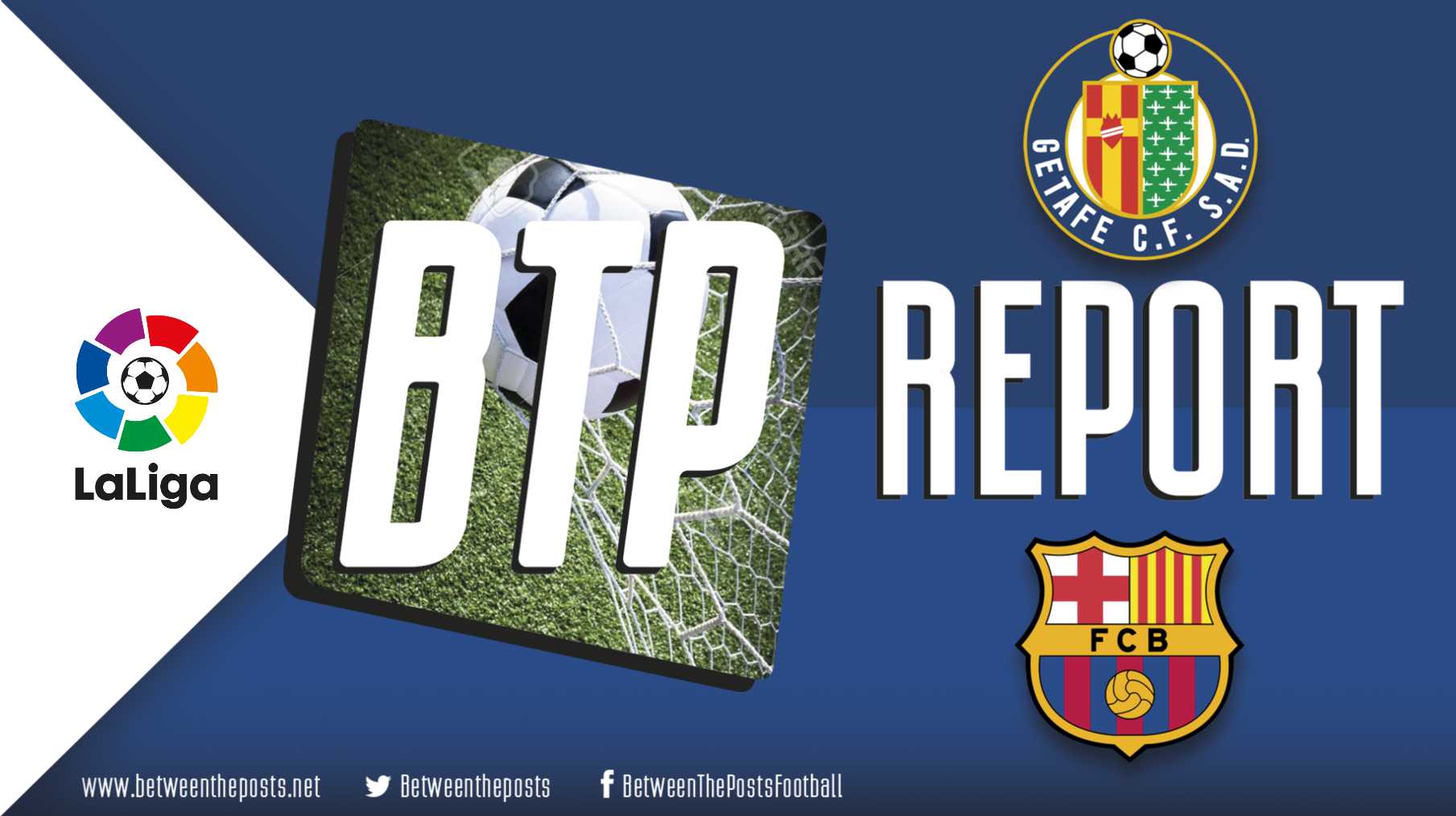