Atlético deservedly won the first leg of their tie against Juventus by following the classic Simeone playbook: outstanding defensive organization, good attacking transitions, and a decisive set-piece game. Juventus did not create scoring chances and Allegri and his players did not react well – both tactically and emotionally – to Atlético’s superiority.

The Atlético of Diego Simeone still possess the best defense in LaLiga, but their defensive block is not as impenetrable as it used to be, as goalkeeper Jan Oblak must often work miracles to protect his goal. However, the biggest disappointment is the unproductive offense, whose underlying numbers are just eleventh in the league.

Star forward Antoine Griezmann has been forced to carry his team’s attack, assisting and scoring almost half of Atlético’s shots and goals. Fortunately for Atlético, Champions League knockouts sometimes seem like an entirely different sport to league football, one that favors their tremendous experience, competitive spirit and clutch performances.

On the other hand, Massimiliano Allegri successfully rebuilt Juventus’s game around new star signing Cristiano Ronaldo, a complex task that his outstanding management made look easy. Juventus are now a team who maintain their reactive football identity and excellent handling of game states while still allowing Ronaldo to produce more than one goal / assist per game. Their offense has never been more productive and that allows Juventus to dominate Italy in an authoritarian fashion, with a 13-point lead over runner-up Napoli. However, the club’s true objective this season – the reason they signed Ronaldo – is to win the coveted Champions League trophy.

Simeone and Atlético lined up in the usual 4-4-2 shape, starting more experienced players like Juanfran and Diego Costa instead of Santiago Arias and Álvaro Morata. The goal of Jan Oblak was defended by the back four of Juanfran, José María Giménez, Diego Godín and Filipe Luis. Further ahead, a double pivot 4-2-3-1 is one of the most frequently occurring formations in football. The two most defensive midfielders are called a ‘double pivot’. of Thomas Partey and Rodri Hernández was accompanied by Saúl Ñíguez and Koke as wide midfielders (in other words, Atlético started with no true wingers). Up front, the striker duo of Antoine Griezmann and Diego Costa was fielded.

Juventus and Allegri also came out with the expected 4-3-3 shape. Wojciech Szczęsny was screened by Mattia de Sciglio, Leonardo Bonucci, Giorgio Chiellini and Alex Sandro. Surprisingly, Allegri opted for De Sciglio instead João Cancelo for the right back position. In midfield started the trio of Miralem Pjanić, Rodrigo Bentancur and Blaise Matuidi. Up front, Allegri opted for his usual forward trio of Cristiano Ronaldo, Paulo Dybala and Mario Mandžukić.

No Cancelo, no party: Juventus struggles to progress against Atlético’s defense

Juventus are an incredibly talented and competitive team but are not without deficits. Box-to-box midfielders Bentancur and Matuidi have outstanding defensive workrate, but neither is an elite ball progressor nor plays well in between the lines, nor provides a significant goal-assist threat. Meanwhile, the Dybala – Ronaldo – Mandžukić forward trio have a speed deficit that hinders their one-versus-one capabilities. The breakthrough of João Cancelo as one of the world’s best offensive fullbacks was vital in mitigating all these deficits. He could help midfield in ball progression and chance creation tasks while compensating the speed and one-versus-one deficits of the forward line. Without him, it is much harder for Juventus to have a good offensive performance, and that was more evident than ever against Atlético’s outstanding defensive structure. 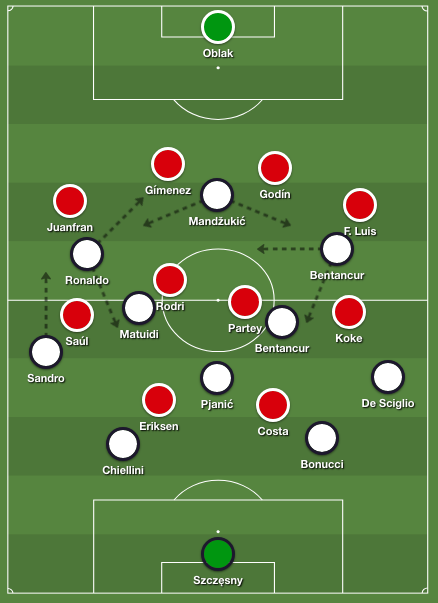 Juventus and their 4-3-3 shape in possession against Atlético’s 4-4-2 medium block.

Surprisingly, Atlético decided to forego the initial pressing phase they normally use against top opponents in their home ground. Instead, Atlético defended the entire game in a supremely organized 4-4-2, forming a medium block. A medium block refers to a team that retreats in their own half out of possession, generally only disrupting their opponents some way into their own half.Griezmann and Costa would not press the central defenders aggressively and instead tried to block their passing lanes to Pjanić, Juventus’s key ball progressing midfielder. If Pjanić received the ball, Thomas Partey would quickly move forward to press him while Koke would tuck inside to cover the space left behind by Partey.

Koke and Saúl were excellent at reading defensive situations and judging when to cover the wings and when to cover the center. Atlético could shut down Juventus’s progression through the center or through the wings. Bonucci, Chiellini, and Pjanić moved the ball quickly from side to side with long passes to disorder the Atlético defense, but Atlético always kept their orderly structure. Therefore, Juventus’ only real means of ball progression were Dybala and Ronaldo dropping in between the lines to initiate passing combinations or dribble past opponents.

Atlético tries to strike on the counter

Thanks to the ball-playing talents of Chiellini, Bonucci, and Pjanić, Juventus can be hard to press when playing out from the back and they can exploit the spaces behind an opponent’s pressing line. By sitting deeper and inviting Juventus to move forward, Atlético could turn the tables and exploit the spaces behind Juventus’ midfield lines instead.

However, creating good counterattacks was tricky business for Atlético, since they lacked fast wingers and strikers who could exploit spaces on the counter. Fortunately, Atlético’s key creative players were sharp and fast in their passing game. Filipe Luís and Partey could cut through the Juventus midfield with good line-breaking passes, while Koke, Saúl and Griezmann expertly moved behind the Juventus midfield to receive those passes. Griezmann moved through the entire attacking front to help his team move forward. He provided useful passing outlets, smart lay-offs, initiated passing combinations or even drifted wide to compensate for Atlético’s lack of real wingers. 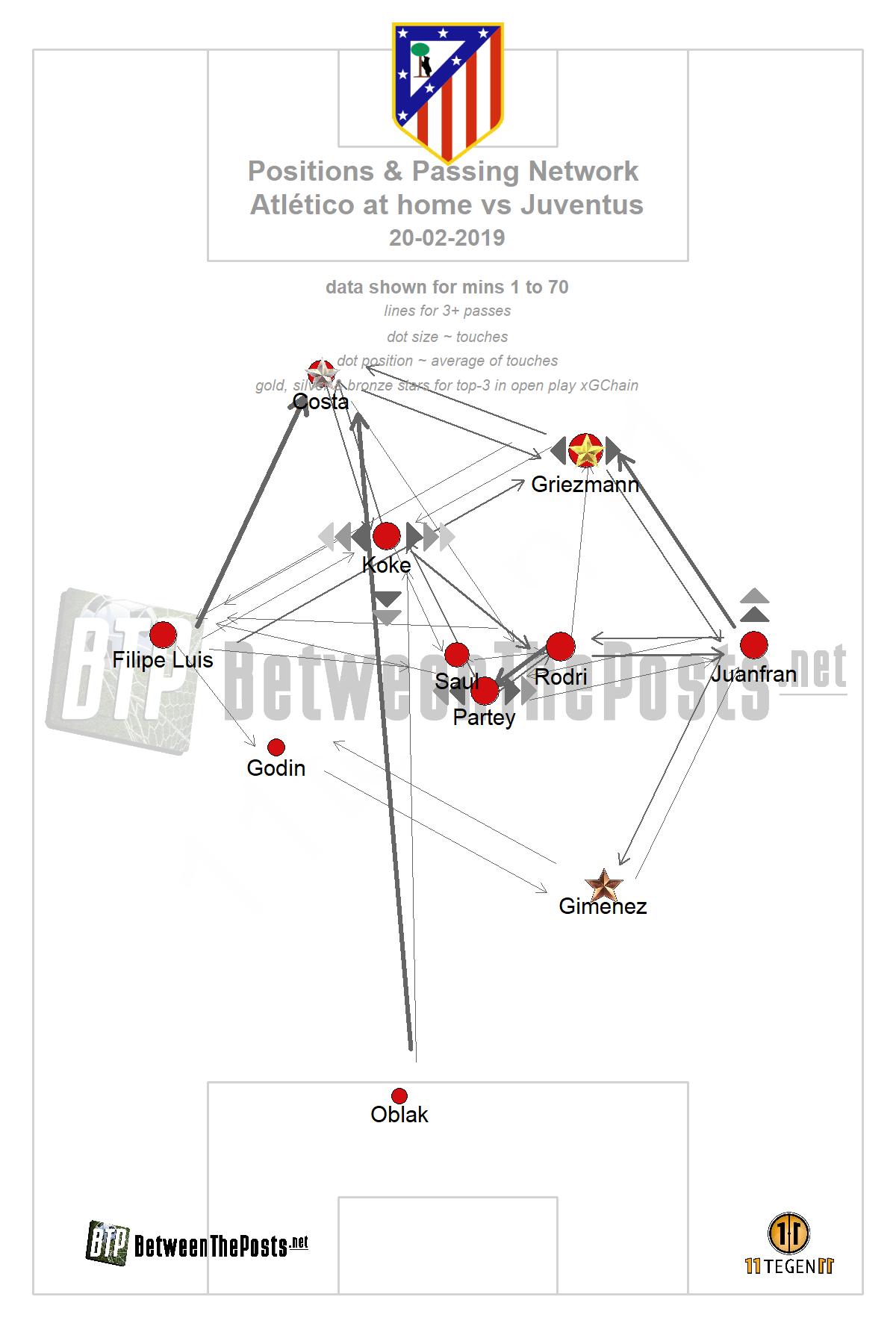 However, despite Atlético’s sharp passing and Griezmann’s tireless efforts, Atlético could rarely threaten Juventus’ block from open play. Both teams produced most of their first half shots through set-pieces (six out of eleven). The 0-0 scoreline was only seriously in danger when the referee awarded a penalty to Atlético on the edge of the box, a decision that was later recalled by the Video Assistant Referee, who would play an even bigger part in this match in the second half.

Atlético wins a second half battle of directness and set-pieces

Longer, slower possessions would not get the job done, so in the second half Juventus tried to be more direct in their passing. They looked for long balls towards Mandžukić or fast, long passes to the left wing for Ronaldo and Sandro to produce crosses into the box. However, Atlético defenders were dominant in the air and great at winning second balls. Thanks to the more open game and the exquisite final passing of Koke and Griezmann, Atlético produced two big (but unsuccessful) chances early in this half.

However, both teams still struggled to hurt each other in open play, even if Atlético looked more dangerous on the counter. Simeone did not want this game to end goalless for his side, so he subbed aggressively. At the 58th and 61th minute marks, Álvaro Morata and Thomas Lemar were subbed in for Costa and Partey, and in the 67th minute, Ángel Correa replaced Koke. These changes led to a faster, more direct Atlético, with Saúl – Rodri in the double pivot, Lemar – Correa on the wings, and Griezmann – Morata up front.

Simeone’s reading of the game was accurate and decisive, because the increased directness benefitted his team. Atlético were winning more aerial duels and second balls, and the speed of Morata, Lemar and Correa allowed them to exploit the spaces generated after those duels. And with Morata and Correa aggressively breaking into spaces and getting into goal scoring positions, Atlético could produce more chances from crosses, like the Morata goal that was ruled out by VAR.

Allegri tried to counter Atlético’s directness with more physicality, which led to him substituting playmaker Pjanić with Emre Can in the 73rd minute. This change made things worse, as Juventus lost their ability to keep the ball. The match became even more direct and physical and more beneficial to Atlético, who were still winning most duels and second balls.

As the match became more physical and direct, more fouls and set-pieces are conceded, too. And we all know that conceding late-game set-pieces to Atlético usually leads to bad outcomes for the opponent. In a 78th minute corner, Gímenez took advantage of a failed clearance to score, and Godín did something similar with an 83rd minute free kick.

Allegri tried to react to this deadly one-two punch by substituting Federico Bernardeschi for Dybala and Cancelo for Matuidi after each of the goals, but these offensive changes came too late. Rodri, Lemar, and Griezmann were hiding the ball away from Juventus, and Atlético defenders prevented their opponents from getting into good crossing positions. And the one time Juventus broke through decisively – thanks to an excellent Bernardeschi shot from a Ronaldo set-piece -Oblak was there to maintain his clean sheet.

Atlético completed yet another one of their classic European nights and outplayed one of the strongest opponents of the competition. They did it following the Simeone playbook to heart: supreme defensive organization, attacking transitions, directness, and set-pieces. And on top of these classic Simeone elements, Atlético took advantage of the creative talents of Filipe Luis, Koke, Rodri, Partey, Lemar and Griezmann to keep the ball and string great passing sequences. Even if Atlético’s league form is not inspiring, Champions League is a very different ballgame and it’s clear that Simeone’s men are one of the top threats in this competition.

Allegri has often succeeded in designing game plans that hide Juventus’s deficits and boost their strengths, but he struggled to do this against Atlético. The absence of Cancelo in the starting lineup was unsustainable against a defense of Atlético’s caliber, the substitution of Can made Juventus lose further control of the game and the more offensive changes came too late in the game. Of course, we cannot pin the full blame of this loss on Allegri, since it’s clear that Juventus’s players did not react well to Atlético’s tactical dominance. However, it’s certainly strange to see Allegri’s game management – one of the very best in Europe – fall below its usual standards. 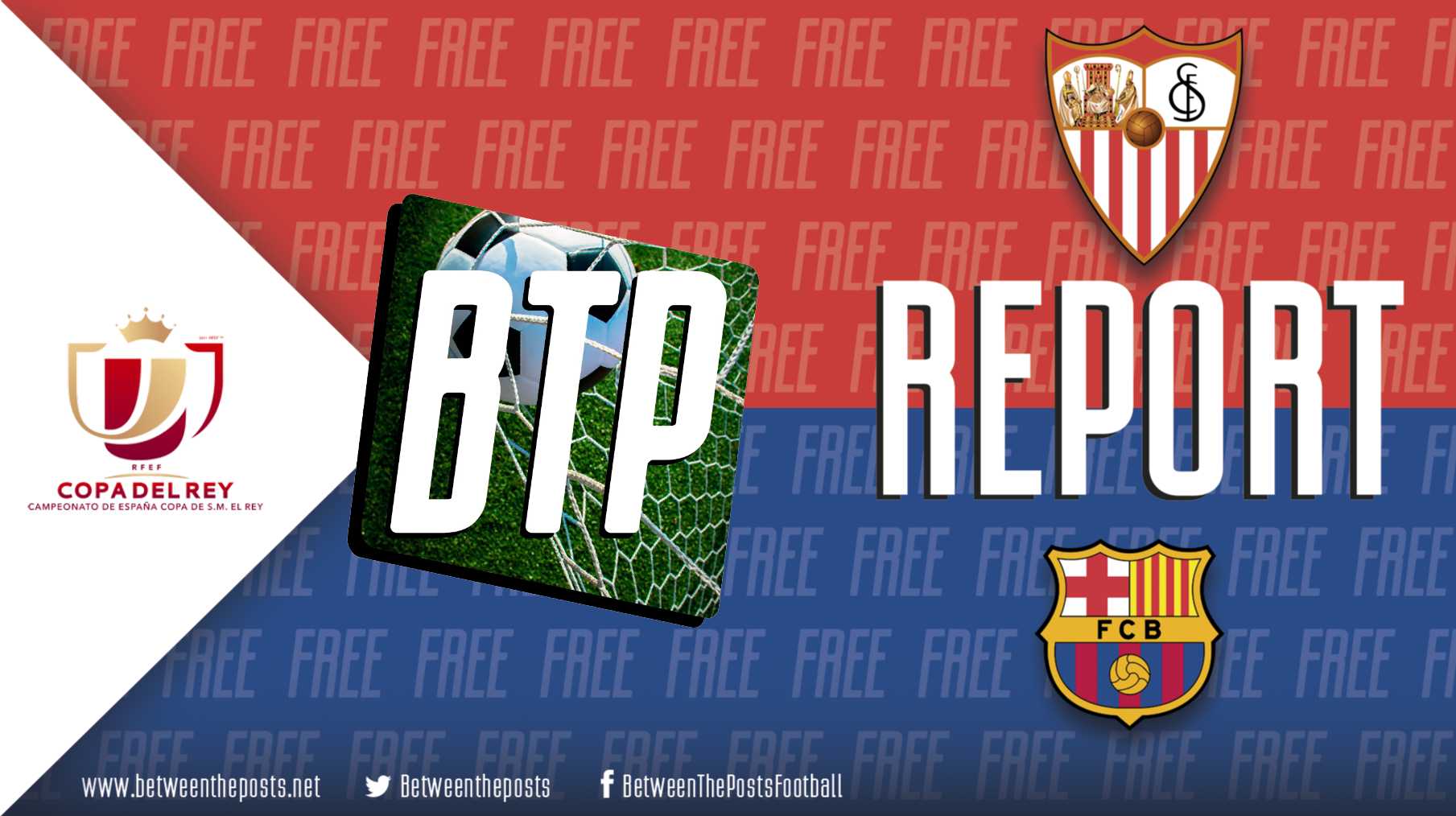 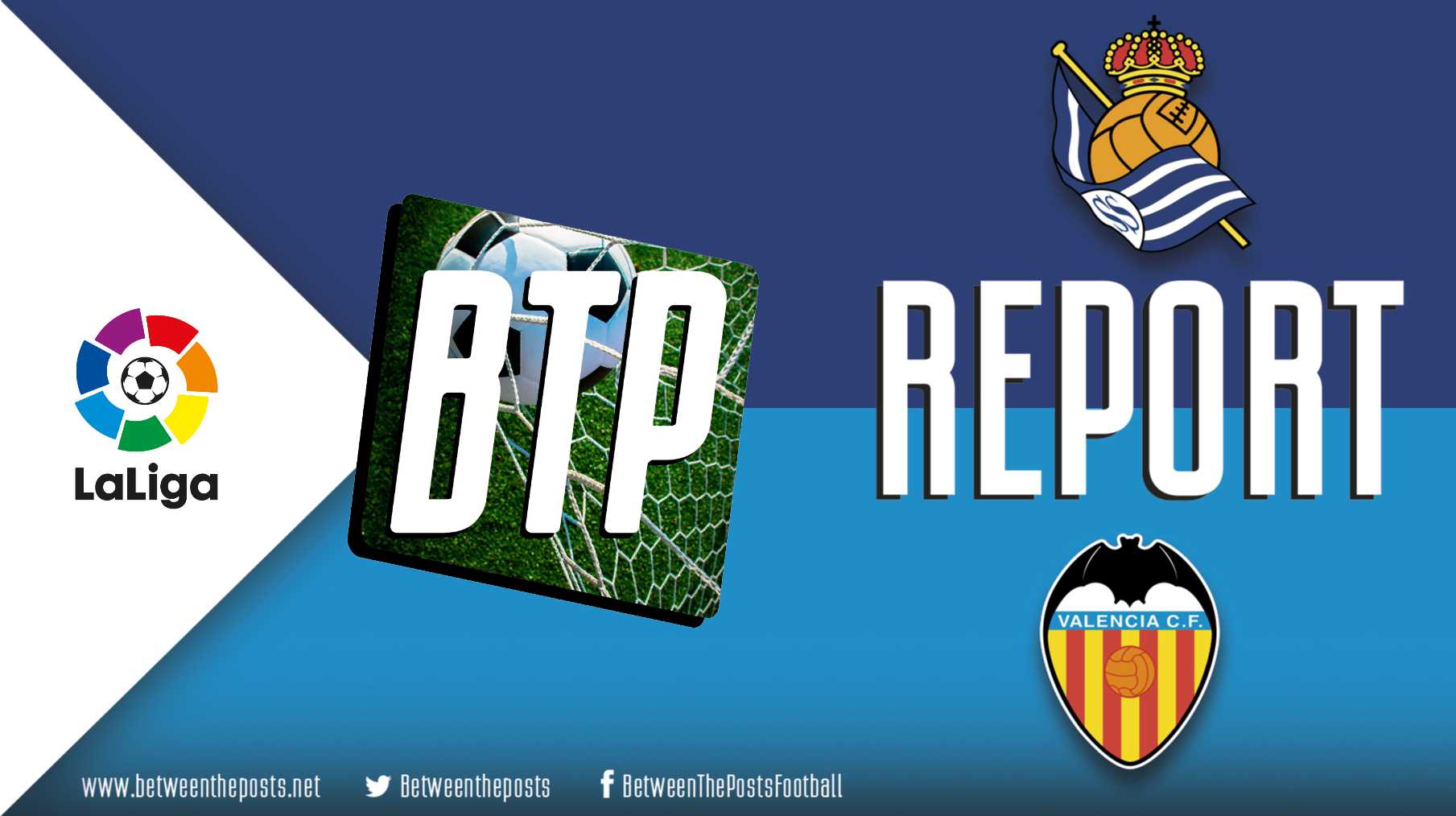