Atlético Mineiro hosted Flamengo at the Estádio Independência with a chance to finish the day in second place in Série A. In their way stood Flamengo, a possession-heavy side that, when they finish their chances, can decimate teams and turn the game into one big rondo. How a good contest including beautiful goals was played out.

Atlético Mineiro came into this game off the back of a 2-0 defeat to Série A table-toppers Palmeiras. Manager Rodrigo Santana had made widespread changes for the upcoming fixture and was hoping for his side to bounce back after a good early spell of form had seen them rise up the table. His side would be hoping to better last year’s sixth placed position.

Operating in his usual 4-2-3-1 formation, Santana brought his number ten, Juan Cazares, back into the fray. The Ecuadorian international had his head turned following interest from fellow Série A side Grêmio, but was back in the starting eleven after a few games out. One other key change also came in the front line, with journeyman Ricardo Oliveira operating as the ‘ponta de lança’ or lone striker. The 39 year-old can still perform the demanding role due to his ability to bring his younger, more athletic teammates into play. His clean, clinical striking in front of goal isn’t bad either.

Flamengo had been a rollercoaster side in the weeks leading up to this game. Losing to Internacional, they then drew with São Paulo before beating Chapecoense. The individual brilliance of striker Bruno Henrique had often been the focal point of manager Abel Braga’s side, alongside with the playmaking ability of their double pivot. 4-2-3-1 is one of the most frequently occurring formations in football. The two most defensive midfielders are called a ‘double pivot’. Comfortable in possession, the press-resistant duo of Willian Arão and Gustavo Cuellar are at the core of Flamengo’s 4-2-3-1 shape, as they provide a platform for the front four of Éverton Ribeiro, Giorgian de Arrascaeta, Gabigol and of course Bruno Henrique. This dynamic attack had given them seven goals in their last four Série A games.

The game began with Flamengo attempting to dictate the majority of possession against Mineiro’s medium block. A medium block refers to a team that retreats in their own half out of possession, generally only disrupting their opponents some way into their own half. However, due to the nature of the block and the effective pressing line of Rodrigo Santana’s men, they were vastly limited. This allowed Mineiro to push back the main protagonists on the ball, Arão and Cuellar, and force them deep into their own half. 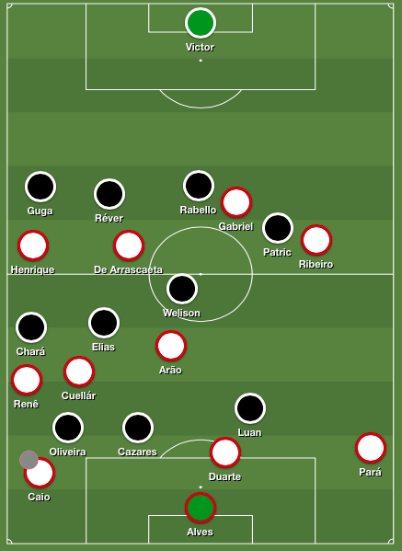 This came to fruition for the home side in the 28th minute, when Flamengo lost the ball near their own corner flag via a deflected clearance; the returning Juan Cazares took the ball and drove at the last couple of defenders. Faking to shoot not once but twice and the remaining center-backs were soon both on the floor. Got to love a bit of favela skills in a Serie A game. After bamboozling the entire Mineiro defense, all that was left was for Cazares to pass the ball past Diego Alves in the Flamengo goal.

Following the goal, play resumed with Flamengo on top and just three minutes later they were on level terms and, once again, it was down to the brilliance of Bruno Henrique. Receiving the ball wide on the left hand side, Henrique quickly shifted inside then out, flashing a strong left-footed strike across the goal and into the far corner. A remarkable goal considering he was off balance, making the score level just past the half hour mark.

Flamengo were now able to blaze past Mineiro’s press more often, forcing Rodrigo Santa’s team into a low block A low block refers to a team that retreats deep in their own half out of possession, generally only disrupting their opponents around their own box. more often. Going into half time, it looked like Mineiro were clinging onto a draw. Matters were made worse in the fifth minute added time when combative defensive midfielder Elias received a red card for a robust high challenge. Serious contender for the most stupid red card of the premature Serie A season.

Atlético Mineiro were now in serious danger of letting their initial lead slip and Santana was happy to see it out to the break. 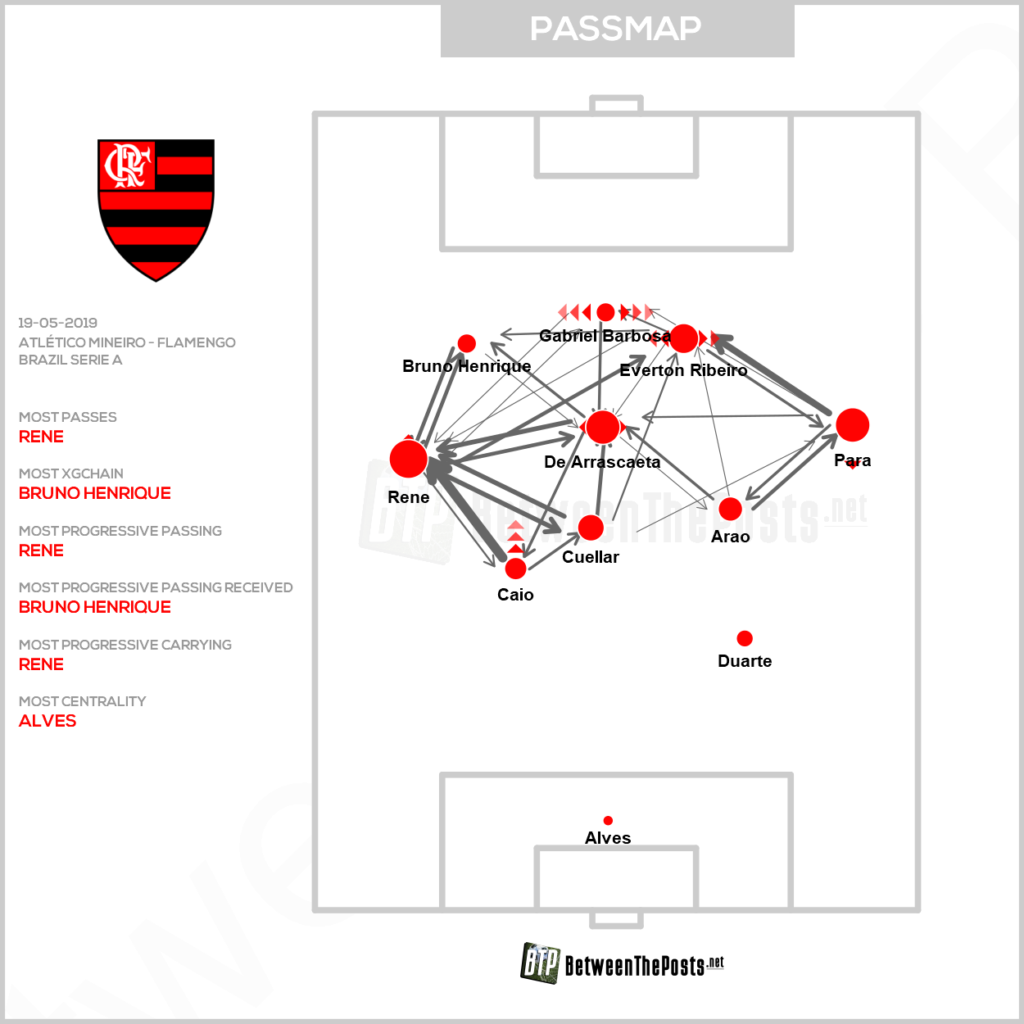 The game winner and solid defending

Going out into the second half, most of the fans at the Estádio Independência would be satisfied with a draw after going down to ten men. Flamengo were expected to now dominate the game, as they are already a possion-heavy side, attempting to break down a sturdy defense. The opening exchanges were far from it, however.

A frantic, end-to-end tempo ensued, and it was Atlético Mineiro who poked their noses in front once again just three minutes into the second half. A poor defensive header from Flamengo defender Léo Duarte gave right winger Yimmi Chará the opportunity to strike a ferocious Van Basten-esque volley past the flailing Alves.

The volatile start to the second half carried on for a short while after the goal, but after about ten minutes of play, the game had simmered to a case of attack against defense, with Mineiro goalkeeper Victor forced into a few fine saves: a diving stop denying Henrique his second of the match being the most prominent one.

Flamengo were able to break into the halfspaces If you divide the field in five vertical lanes, the halfspaces are the lanes that are not on the wing and not in the center. Because there is no touchline like on the wing, players have freedom to go everywhere. But this zone often is not as well-defended as the very center. This makes it a very valuable offensive zone to play in and a lot of chances are created by passes or dribbles from the halfspace. effectively but Mineiro’s compact deep block made it very difficult to gain a clear shot on goal. Ball-progression into dangerous areas was fine, but in this match, they lacked a final ball landing just behind the defense. Most notably the right halfspace was successfully targeted, without anything substantial created from these valuable positions. Praise has to go to Atlético Mineiro’s resilience in defense as well and in the end, they were able to come away with all three points. 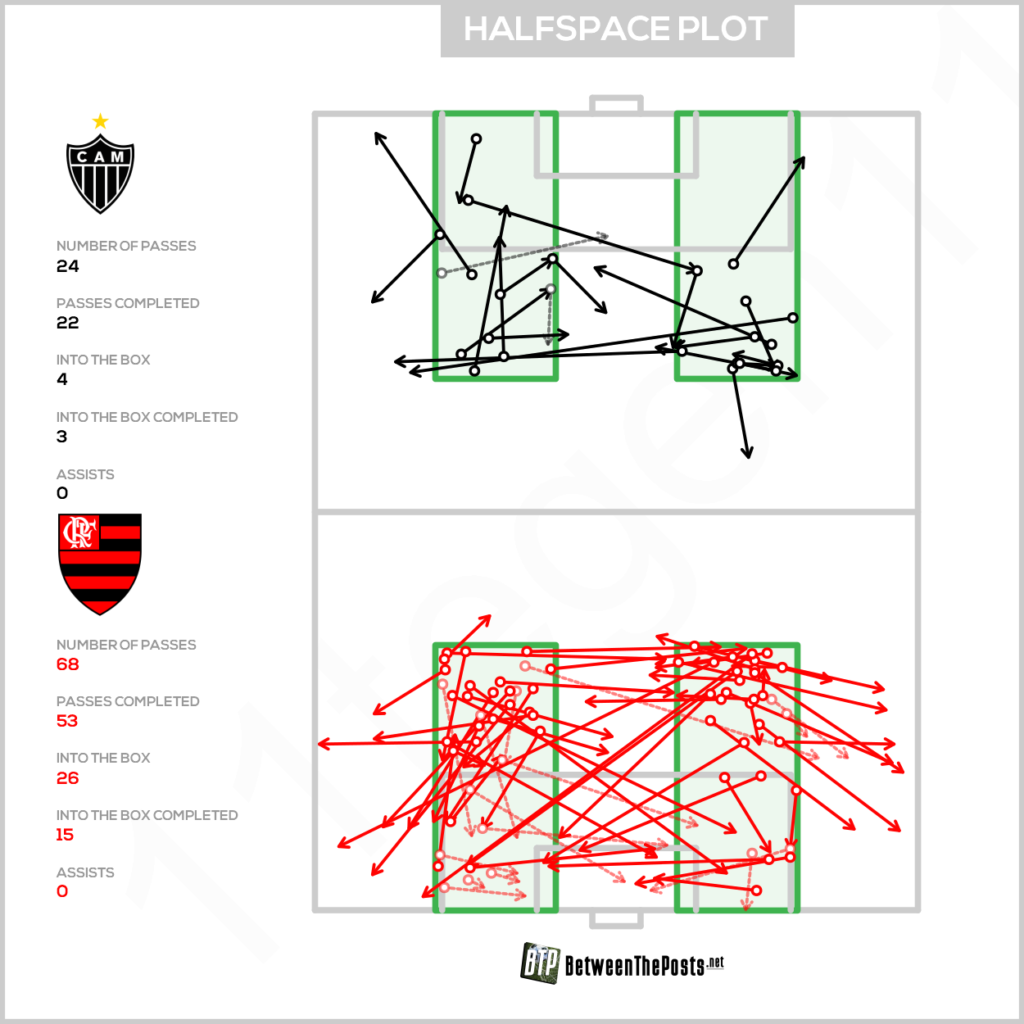 Flamengo were able to get into good positions, but were unable to make anything of it.

Atlético Mineiro would be over the moon with the way that they managed to deny the Flamengo forwards and particularly with their marshalling of danger men Bruno Henrique and Gabigol. This win sees Mineiro climb to second place in Série A and alongside Palmeiras, they seem to be the in-form team in Brazil for now. The next game will see them pitted up against Grêmio, in what will prove to be another tough test.

Flamengo will be disappointed. They were unable to gain a break through after over thirty minutes of all out attack, but there were still positives to take away. Bruno Henrique has the quality to operate at the highest level and for now, is producing goals at a level not yet seen in his career. Despite playing out on the left, rather than down the middle as he had been in previous games, Henrique was incredibly effective in one-against-one situations against the Atlético Mineiro fullback Guga. 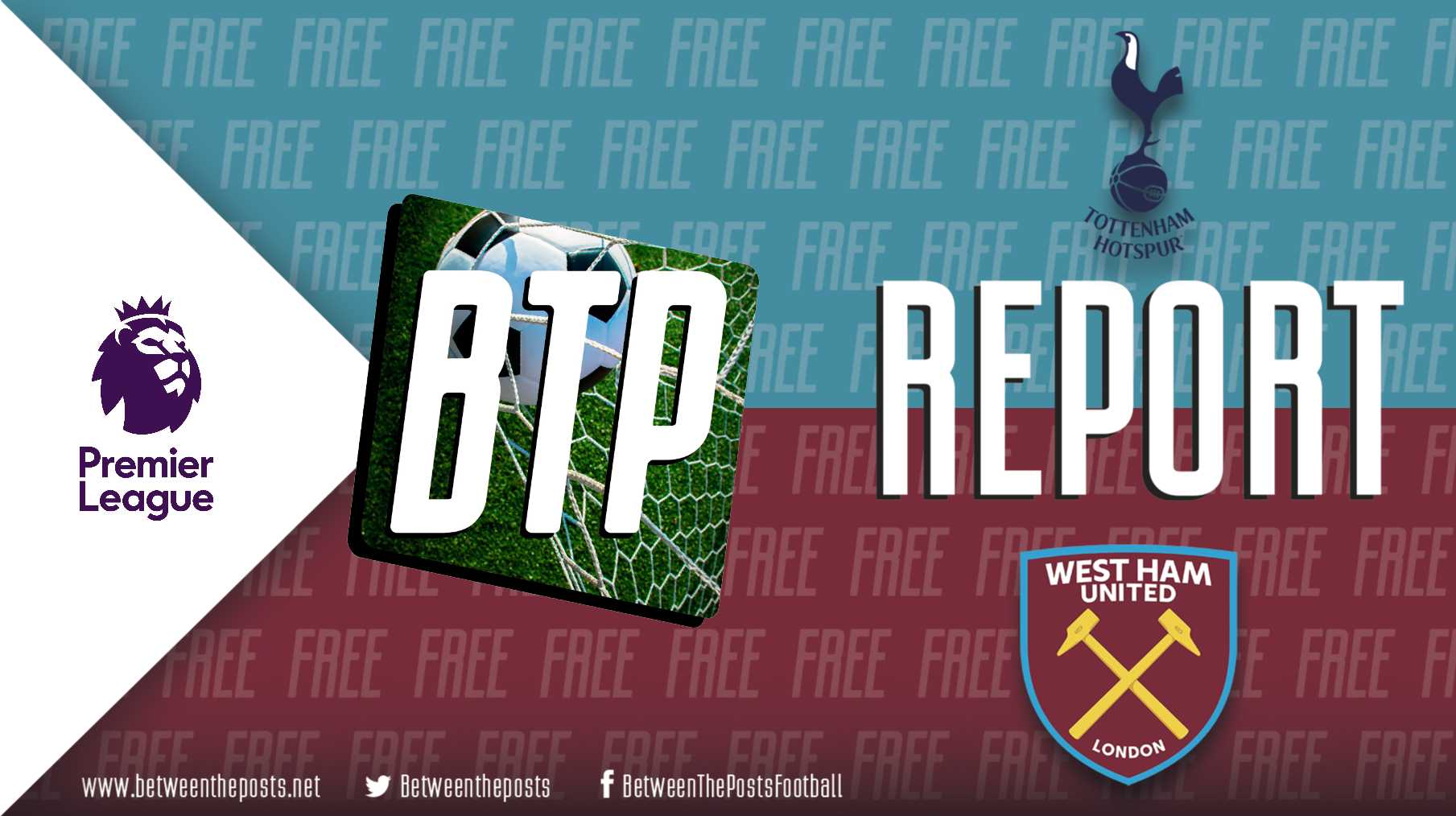 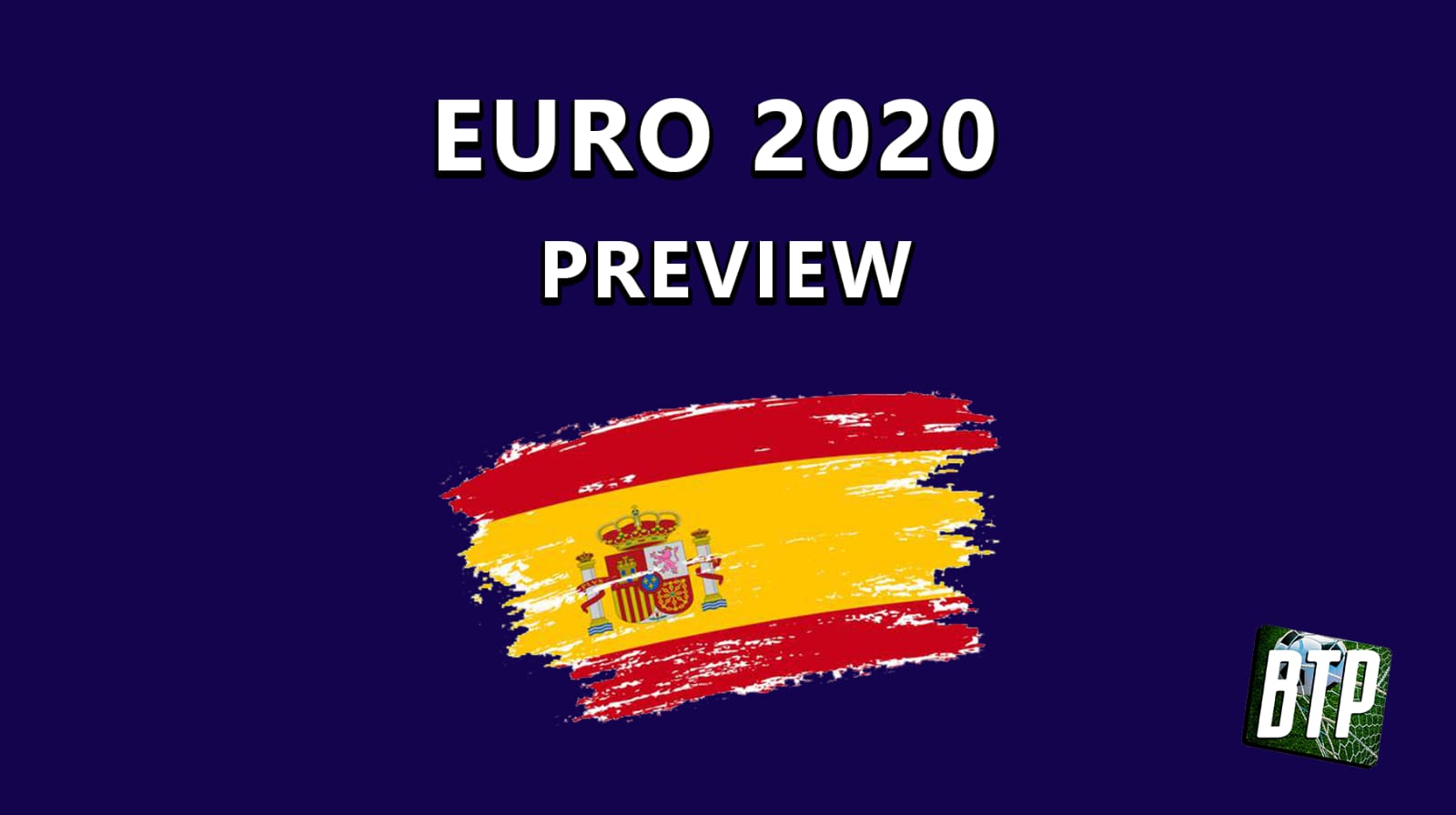