Following the international break, Bayern Munich would have expected an easy victory over Bavarian rivals Augsburg. However, with Kimmich absent and their rhythm disrupted, the visitors could only muster a single goal, as fullbacks Iago and Robert Gumny inspired the home side to much needed derby day delight.

For the most part, Julian Nagelsmann has enjoyed a smooth campaign as the new Bayern Munich head coach. The first hiccup came against Eintracht Frankfurt, where misfortune in front of goal and some Filip Kostić excellence saw them suffer their first defeat of the season. they rebounded into form following the loss, but hiccups in recent times have once again set alarm bells ringing. The first was a shocking 5-0 defeat at the hands of Borussia Mönchengladbach in the second round of the DfB-Pokal, the second was a hard-fought 2-1 win over Christian Streich’s phenomenal Freiburg. Following the Freiburg win was the banana skin fixture against Augsburg, which had the potential to once again tip up Bayern. Complicating matters was the absence of Joshua Kimmich due to his unvaccinated status, which meant Nagelsmann could not count on his trusted midfield general to right the ship.

Despite Kimmich missing out and Alphonso Davies getting some deserved rest, Bayern still fielded their strongest possible team. Manuel Neuer had Dayot Upamecano and Lucas Hernández as center-backs, with Omar Richards and Benjamin Pavard on either side. Nagelsmann deployed a double pivot of Leon Goretzka and Marcel Sabitzer, with Thomas Müller in the No. 10 role. Robert Lewandowski led the line, with support from Serge Gnabry and Leroy Sané.

Augsburg came in sporting a 3-3-6 record, with an impressive victory over Stuttgart being overshadowed by a 1-0 loss to Wolfsburg in the previous game. Despite the absence of npxG+xA leader Florian Niederlechner, coach Markus Weinzierl still fielded a capable side in his usual 4-4-2 shape. The defense comprised of center-backs Reece Oxford and Jeffrey Gouweleeuw, with Iago and Robert Gumny as fullbacks. The double pivot of Niklas Dorsch and Arne Maier was flanked by the winger combo of Mads Pedersen and Daniel Caligiuri, with strikers André Hahn and Andi Zeqiri up front.

Playing with a 4-4-2 formation, the home side was careful not to fall into the trap of parking the bus against Bayern. Rather, they looked to get on the ball and otherwise make it difficult for Bayern to play through them, though the plan did have some flaws in it.

To start with, the strikers and midfielders were active in pressing out of a medium block, with the wingers occasionally stepping in to form a 4-1-3-2 shape. Faced against Bayern’s now common 3-1 buildup, the strikers and wingers were keenly involved in the press. If the winger chose to stay attached to the midfield, then the ball side fullback would step out to mark the advanced Bayern fullback. As is common with such schemes, the winger and fullback on the opposite side tucked in to keep the center from being exposed, which helped Augsburg shore up their defense.

Instance of Augsburg pressing; the winger focuses on the fullback and the far side striker and winger fall back to allow for the application of pressure. In these instances, Sabitzer was relatively unmarked and could receive behind the strikers. However, he did not take advantage of this in ways that Kimmich has displayed.

The wingers and double pivot were flexible, as they stepped in and out of the frontline depending on the location of the ball. They focused on guarding against rotations on the wing, but in the process left Sabitzer free to receive either directly or as the third man.

From his position at the base, the Austrian had the potential to drive the play, but he often passed back if a clear forward option was unavailable. This is also a frequent sight with Kimmich, but the German has a tendency to lose his marker and get into areas from where line breaking passes can be made. Sabitzer had a couple of moments where he showed his ability to spring forward and release his teammates for a swift move, but it was overall an infrequent sight. Here, credit must also go the double pivot, who jumped to press if Sabitzer advanced into their territory. The wingers also blocked the halfspace, making it trickier to access the advanced midfielders.

Augsburg did not use an overtly complex scheme, but they were efficient in their execution. They did get opened up on a couple of flank rotations, but they nudged the Bayern players just enough to make the cutback a suboptimal move. Bayern tried several rotations with players moving seamlessly across the frontline, but the home side remained disciplined and disrupted moves by following their direct opponent into deeper areas and forcing them to get rid of the ball. While Bayern did move to get into vacated spaces following these man-marking moves, the sequences were well defended, and it took a superb finish from Lewandowski to finish off Bayern’s first real opportunity.

As expected, the possession figures are skewed in Bayern’s favor, but Augsburg were smart in their utilization of possession. The double pivot tried to get on the ball and make something happen by getting into the forwards, with the wingers playing a key role. Generally, the wingers began from wide areas but came into the center and halfspaces, which had the effect of narrowing the defense and allowing the fullbacks time and space to overlap. Both goals came from the same and were the product of left back’s Iago’s initiative, which was matched by Gumny on the right.

Augsburg's opener is on Sabitzer; we see him narrowing the angle in the first shot, but he switches off & loses sight of his mark once the pass is played which allows Pedersen to pounce on the rebound. Also shows a general tendency for the Augsburg wingers to come inside. #FCABAY pic.twitter.com/6dhfJRb3Yp

While the first was a Sabitzer mental error which gave Pederson a crucial head start in getting to the rebound, it was product of a cross from Iago after a layoff from Pederson. Similarly, the second came from a deep cross from Iago which should have been defended better, but resulted instead in a strong header from striker Hahn. It was efficient use of their limited possession, and saw Augsburg take a crucial two-goal lead against a Bayern side that was less imaginative than usual.

Under Nagelsmann, Bayern’s shift to a 3-1-5-1 in possession has produced impressive results. By giving Kimmich license to operate the team from deep, allowing Davies to run the left wing and bringing Sané closer to goal, Bayern have been prolific across competitions. However, in a game with two out of the aforementioned three ingredients missing, the visitors had a difficult time unlocking the Augsburg defense.

There were frequent rotations across the frontline, with one of the most common combinations taking place between Gnabry and Müller. Gnabry would often receive and come inside with Müller going to the outside to drag away a defender and provide an outlet, or sequences would begin with Gnabry flanking Lewandowski up top and Müller starting from out wide. There were instances where Lewandowski and Müller dropped while Sané and Gnabry were in the box, but all of it was to little avail.

Bayern were unable to advance centrally, and found their usual slick passing disrupted by overhit/under hit passes that allowed Augsburg to intercept the ball. Omar Richards was unable to replicate Alphonso Davies’ penetration on the ball, and found himself substituted for the Canadian early in the second half. Similarly, Sabitzer provide ineffective and was taken off for Jamal Musiala, with Goretzka moving into the ‘six’ space. However, Augsburg remained alert, first forcing the ball out wide before moving out to intercept possession. The double pivot moved well to ensure that pressure was applied, and the wingers and strikers worked hard in tracking back when needed. Further, the defenders were alert to close off angles for the forwards such that they were unable to turn.

The work rate of the double pivot and attacking quartet meant that Bayern, despite winning the possession battle, were unable to exploit their advantage.

When Bayern did get into the box, the chances weren’t of very high quality, leading to an inflated shot count with little to show for it. They were predictably dominant in the area outside the Augsburg box, but the chances they did create were snuffed out by a combination of intelligent defending and solid goalkeeping. Towards the final 25 minutes, Augsburg did not have a release valve in front, as they committed the entire team to defending the box and controlling the second line of Bayern’s rest defense. 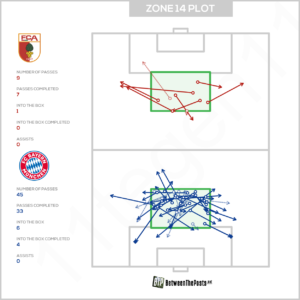 This was not a match where Bayern were overwhelmingly dominant but were let down by finishing, but rather where they possessed the ball and progressed in the manner that was expected by Augsburg. This, combined with unexpected lapses in decision-making, was sufficient for the hosts to secure the win, and for the visitors to leave frustrated.

Two successive disappointing performances in a row will spell worry for Nagelsmann. While Kimmich’s situation poses its own issues, the team cannot look as slow as it did in the midfielder’s absence. Sabitzer was unable to impose himself as one would expect, and improvement from the Austrian is monumental if Kimmich is to miss more time. Nobody in the Bayern squad has the profile to play in his stead, with Corentin Tolisso a bit rash in his passing and Marc Roca unable to stake a claim for a starting spot.

For Augsburg, it is a win that will be cherished for a long time. They deserved it given their work rate and gameplan, though they were a bit fortuitous insofar as the second goal was concerned.