Barcelona’s new “Arthur-system” passed a difficult test by dominating Internazionale even without Messi, as Barcelona showed both defensive stability and an intelligent attack. Inter shifted from its more conservative first half game plan to a high press in the second half, without being able to make a dent in Barcelona’s defense.

FC Barcelona’s manager Ernesto Valverde seems to be slowly turning the tide after a somewhat chaotic season start. Valverde began this season with a higher-tempo game plan that used Ousmane Dembelé on the left wing and Messi on the right. However, Barcelona conceded counterattacks too easily in that system.

Valverde thus introduced a significant tactical change in Barcelona’s previous Champions League victory against Tottenham. He dropped the talented but at times disorderly Dembelé in favor of central midfielder Arthur Melo, moving Philippe Coutinho to the left wing. Barcelona now prevents counterattacks far more easily and the team can finally enjoy some defensive stability and a more-well defined offensive structure. However, Lionel Messi’s elbow injury against Sevilla offered an unexpected and harsh test on this nascent system, as Internazionale and Real Madrid were the following two opponents.

The Inter of manager Luciano Spalletti also seemed to be finding their way after a difficult start to the season, stringing seven wins in a row between domestic league and European matches. Spalletti has created a team whose main attacking mechanism is crossing into the box (33 crosses per game, highest in Serie A), which represents 40% of their entries into the opponent’s box. This simple but effective strategy takes advantage of productive left-wing players Kwadwo Asamoah and Ivan Perišić, box-to-box midfielders Radja Nainggolan and Matías Vecino, and the world-class movements in the box of striker Mauro Icardi.

Against Inter, Valverde maintained his new system with a couple of tweaks in the usual 4-3-3 lineup. Sergi Roberto started as right back instead of Nélson Semedo, and surprisingly, Rafinha would be Messi’s replacement on the right wing rather than Dembelé. Perhaps these changes were made to allow Barcelona to keep the ball away from Inter’s left wing, the one that produces most of their crosses. Furthermore, Rafinha is a superior defensive asset to all other right-wing alternatives—Dembelé, Malcom, Munir—and was more likely to track back in defense and perform (counter)pressing duties.

Meanwhile, Spalletti and Inter also maintained their usual 4-2-3-1, but with a couple of changes. The more experienced João Miranda started instead Stefan de Vrij at center-back, while Danilo D’Ambrosio started instead of Sime Vrsaljko at right back. The injured Radja Nainggolan was replaced by Borja Valero in the attacking midfield role.

Creative Luis Suárez and Rafinha lead a solid Barca
In the first half, Inter showed their more conservative face. They shifted between a deeper defensive block and a high press that was only triggered whenever Barcelona involved their goalkeeper Marc-André ter Stegen or had to take a goal kick.

Barcelona moved the ball with skill and fluidity past Inter’s conservative pressing, dominating possession (74% to 26% in the first half) and trapping Inter in their own half of the pitch. Busquets, Rakitić and Arthur maintained a slower buildup that allowed Barcelona to move forward as a unit, often aided by a mobile Rafinha dropping deep to help. Thanks to this fluid buildup and Inter’s conservatism, Barcelona could often lose the ball closer to the final third, with everyone well positioned to counterpress. This prevented Inter from creating any dangerous counterattacks. 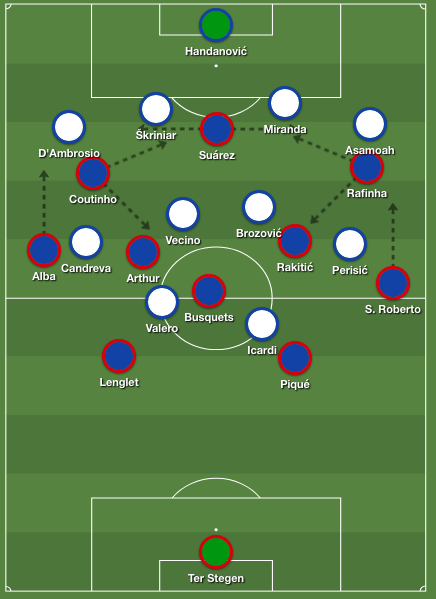 Inter left with no attack
All season long, Inter is a team that tries to play out from the back. Whenever they tried to do so in Camp Nou, Barcelona would press intensely. Coutinho and Suárez would press the center backs, Rafinha would press Asamoah. Meanwhile, right back D’Ambrosio—the weakest Inter defender on the ball—would often be left without any man mark, as it was fairly easy to run up to him and force him into an error or a long ball without direction.

Busquets and Arthur would often move forward to asphyxiate Inter’s double pivot and prevent them from reaching Valero and Icardi, who were marked by Rakitić and Lenglet. If Inter tried to bypass the press by making long balls or tense ground passes to Icardi, Lenglet would continue following the Argentinian striker everywhere, winning aerial duels and anticipating his support runs.

Spalletti’s team was left with almost no way to attack. Incidentally, D’Ambrosio would manage to link up well which Vecino, Valero and Antonio Candreva, moving Inter forward and allowing them to produce timid crosses to an isolated Icardi, who still managed to turn these meek balls into a threat.

Barcelona enjoyed greater offensive success than their opponent. Inter’s pressing often managed to force Barcelona’s buildup away from the center and into the wings. However, the smart movement of Rafinha and Luis Suárez—who was constantly followed by a relentless Miranda—allowed Barcelona to create chances anyways.

Suárez’s movements do not have the same intensity and speed as before, but they are as intelligent as ever. He drifted wide, dropped deep, and provided good lay-offs to fellow midfielders and wingers, effectively linking up all the pieces in Barca’s attack. Rafinha was very good at complementing these movements, and whenever Suárez drifted wide, he would cut inside and even attack the box like a striker. It is exactly this movement that generated Barcelona’s first goal, as in the 33rd minute, Suárez provided a pinpoint cross for Rafinha. The Brazilian brilliantly ran into it and put it in the net like a top striker would have done.

Inter reacts with high pressing, but is overcome by Arthur and Rakitić
Spalletti was willing to be bolder in the second half to stage a comeback. The anonymous Candreva was replaced by Matteo Politano and Inter started pressing continuously high. Valero and Icardi would press Barcelona center backs, Politano and Perisić would press the fullbacks, and the Brozović – Vecino double pivot would move forward to neutralize Busquets, Arthur and Rakitic. 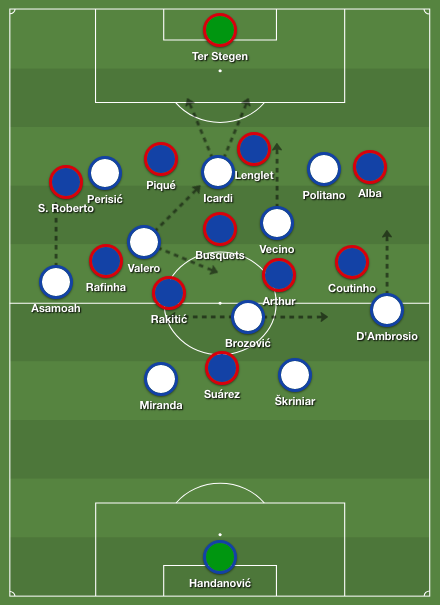 This aggressive behavior allowed the Italian side to dominate the initial minutes of the second half, producing crosses, picking up second balls and pinning the home side back in their own penalty area. This phase did not last long, however, and from the 55th minute and onwards, Barcelona took back control of the match, never to lose it again.

On a couple of occasions, Rakitić and Arthur skillfully dribbled past Inter’s men and connected with an ever-mobile Rafinha, who was always in the right place and time to provide a passing outlet. With Inter behaving more aggressively and leaving more spaces, Barcelona was able to create more dangerous attacking transitions.

Spalletti tried to react to the situation by doubling down on his aggressive approach. Valero was taken off for the talented young Argentine Lautaro Martínez, which gave Inter’s attack a much-needed boost. Martínez pressed with more intensity than Valero, and his increased mobility and one-versus-one capabilities gave Inter more opportunity to break past Barcelona’s defense.

While Barcelona still had most of the possession and Martínez had little opportunity to make a big impact, Valverde opted play it safe. He replaced a tired Rafinha for Semedo, moving Sergi Roberto to the right wing. Roberto would play a more defensive role than Rafinha. Spalletti once again tried to react by substituting Perisić for the fresh legs of Keita Baldé, but at this point the match was firmly in Barcelona’s grasp.

The coup de grâce would come in the form of yet another Barcelona counterattack. In the 83rd minute, Barcelona’s left back Jordi Alba would run from one end of the pitch to the other, linking up with his teammates and moving his team forward on the ball. To finish the play, Rakitić placed a precise through ball right at Alba’s feet, who brilliantly scored the goal that killed the game. Without Messi, Alba had more freedom than ever to cut inside and drive into the box, and he took advantage on multiple occasions. 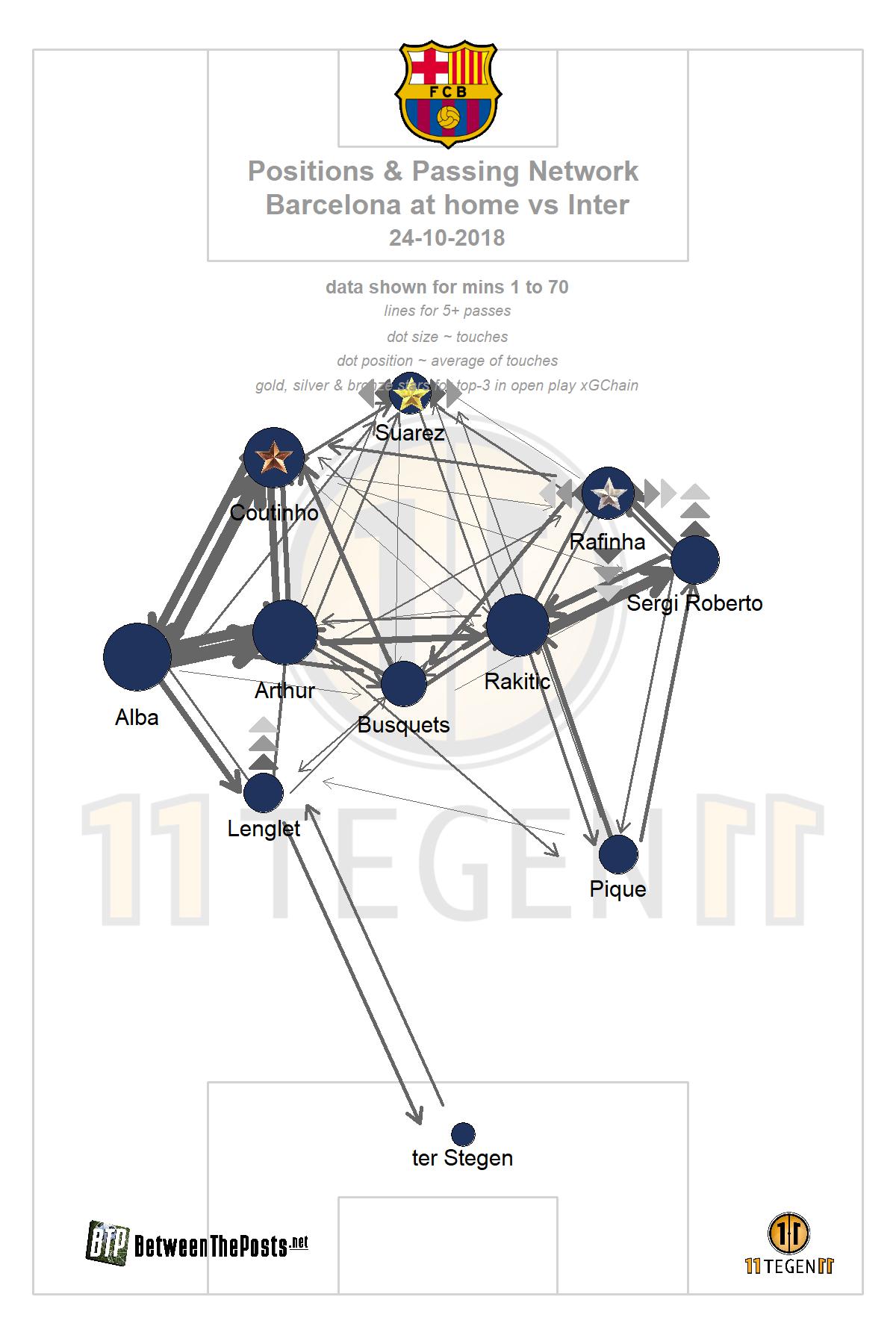 Takeaways
Barcelona aced a difficult test without Messi. They completed a solid collective performance, effectively shutting down Inter’s counterattacking and crossing mechanisms and attacking intelligently with Suárez and Rafinha. Their second half was perhaps even more impressive, as Arthur and Rakitić displayed their press-resistance to overcome Inter. The entire team stepped up in the absence of Messi, and that is exactly what they needed to confidently look forward to the upcoming Clásico against Real Madrid.

As for Inter, this match exposed the limitations of their squad and game plan when facing Europe’s best. Their buildup struggles when pressed aggressively, in part because neither Vecino nor Brozović are really the deep-lying playmaker profile that Inter need in their double pivot. Icardi is one of the world’s most dominant strikers in the box but that means Inter must get him the ball into the box to begin with. As Inter learns to compete against Europe’s best, they might have to reduce their dependence on crossing and become more unpredictable in their ways of reaching Icardi.

Use the arrows to scroll through various match plots. 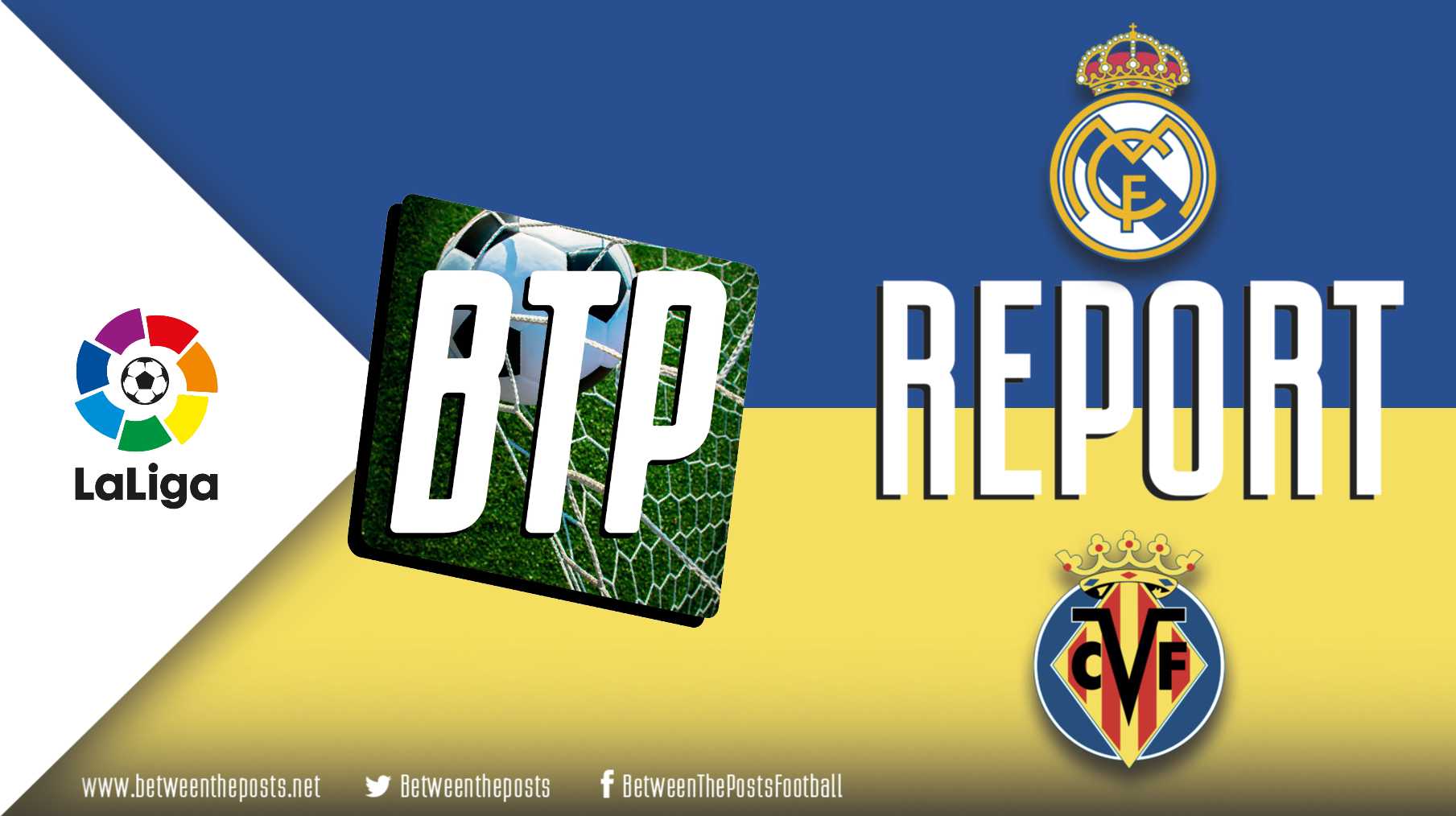 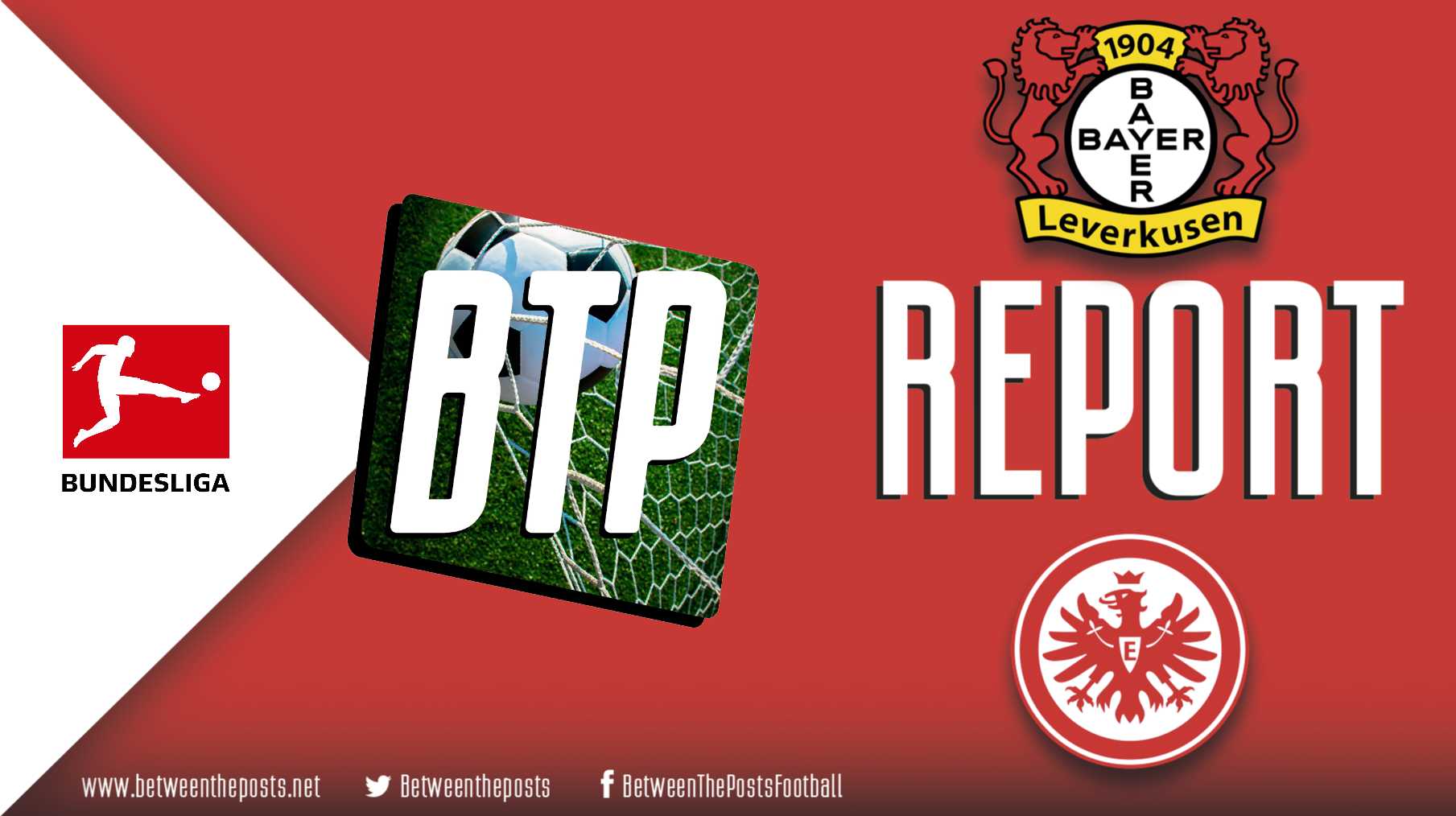