An exciting first half featuring goals and attacking flair gave way to a slower second period which suited Real Madrid perfectly. After Ansu Fati cancelled out Federico Valverde’s opener, it was Barcelona who looked the sharper of the two sides. However, a resurgence of the defensive solidity that brought Real Madrid their title saw them regroup and respond through a Sergio Ramos penalty, before Luka Modrić iced the game with an expert finish on the stroke of 90 minutes.

Midweek exertions in the Champions League meant that both teams had little time to prepare for the season’s first Clásico. Still, Ronald Koeman and Zinedine Zidane unveiled exciting lineups, with both coaches making some interesting choices.

With Barcelona coming off a 5-1 demolition of Ferencváros, Koeman saw fit to restore some key names to the side. Jordi Alba was declared fit to start the game, which saw Sergiño Dest shift to his preferred right back spot. Miralem Pjanić made way for Sergio Busquets as Frenkie de Jong’s partner in midfield. Further, Pedri came in for Francisco Trincão on the right as the most surprising selection by the home side.

With Real Madrid suffering consecutive losses in LaLiga and the Champions League, Zidane was expected to restore the spine of the side that won the league last season. Sergio Ramos was declared fit and replaced Éder Militão as Raphaël Varane’s defensive partner with Toni Kroos coming in for Luka Modrić in midfield. Marcelo was replaced by Ferland Mendy on the left, which saw Nacho come in as the right back. Up front was the attacking trio of Vinícius Júnior, Karim Benzema and Marco Asensio in Zidane’s familiar 4-3-3 shape.

While Koeman has regularly played Philippe Coutinho, Lionel Messi and Ansu Fati as the team’s attackers, their on-field positions saw a slight tweak. Instead of Messi, it was Fati in the striker role, with Coutinho operating on the left and Pedri holding width on the right. Messi was then allowed to roam freely as the number ten, which he did to great effect in the first half.

For Madrid, the shape was their usual 4-3-3 and it was common to see Kroos drop into the defense with Varane and Ramos playing as slightly aggressive half backs. This system is preferred as it gives the team two elite passers in the build-up phase, and it was not surprising that the first goal was initiated by a Ramos pass out to the flanks.

With Pedri putting Kroos under pressure, the midfielder passed the ball to Ramos, who picked out Nacho on the right. The right back found a dropping Benzema between the lines with runners either side, and suddenly the Madrid attack came into sharp focus. With Asensio’s run drawing Alba’s focus and Busquets struggling to track back through the middle, Valverde made a perfect blindside run to latch on to Benzema’s pass into the box. The midfielder needed just one touch before slotting past Neto to give the visitors the lead.

This is twelve seconds before Fede Valverde’s opening goal in #ElClasico. Sergio Ramos make a crossfield pass to Nacho Fernández.

What’s going wrong for Barcelona in this sequence? pic.twitter.com/I2mPDGnsvQ

However, it would not be long before Barcelona struck back – it was a familiar duo that sparked the opener. With Messi regularly drifting from his position in attacking midfield, he often received the ball in deeper areas with several attackers in front. This allowed him to play a chipped pass to the onrushing Alba, who put in a low cross for Fati in the box. The in-form youngster didn’t miss from close range and quickly restored parity.

The hosts settle into a rhythm

Perhaps wary of Fati’s threat from the left, Zidane opted for the defensive and versatile Nacho in the right back spot. However, this was accompanied by a tactical change, as Asensio would often drop deep to protect the right back when Madrid were out of possession.

This resulted in an asymmetric 5-3-2 / 4-4-2 shape when defending, with Kroos, Casemiro and Valverde protecting what occasionally became a back five. Vinícius and Benzema then became the source for outlet passes, of which there were few in the first half.

While Madrid prepared for Fati’s threat on the left, Koeman threw a curveball by playing Coutinho on the left. This often saw Nacho isolated against the midfielder, who had several options when on the ball. Usually, Coutinho received the ball in the halfspace, If you divide the field in five vertical lanes, the halfspaces are the lanes that are not on the wing and not in the center. Because there is no touchline like on the wing, players have the freedom to go everywhere. But this zone often is not as well-defended as the very center. This makes it a very valuable offensive zone to play in and a lot of chances are created by passes or dribbles from the halfspace. with Alba and Messi available as options outside and infield respectively. This allowed Barcelona to easily outfox Madrid when in possession, since they would recycle possession while rotating throughout on the flanks and the halfspace. 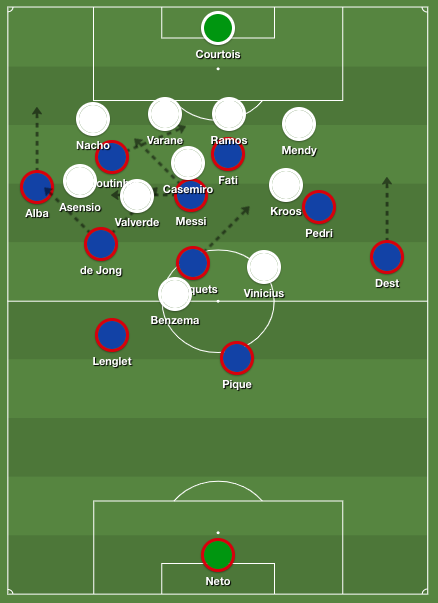 Barcelona’s frequent left-side overloads in the first half. The proximity between Messi, Coutinho, Alba and de Jong allowed them to rotate seamlessly and take up positions that stretched the Madrid defense for Fati to penetrate.

Often, de Jong would push out wide, with Coutinho moving closer to the box and Messi dropping back into the midfield spot vacated by the Dutchman. This would see Alba vary his runs by either making a run inside or continue to hold the width, with the aim being to get into positions from where he could arrive on the ball and put in an immediate cross.

With Nacho repeatedly getting dragged inside by Coutinho, Alba was able to lose Asensio who was often lost in this position, playing almost as an auxiliary wing-back. With the attentions of Valverde and Casemiro diverted by Messi and de Jong, Madrid found it tough to get out of their own half and counterattack before the break.

Additionally, while Barcelona’s right flank has often seemed disconnected during the first few games, the mechanisms to occupy the flank were clearer in this game. Usually, Messi would exchange short passes with Pedri in an attempt to lose his marker, though the more frequent mechanism was a short pass by Busquets to the winger in midfield. This was often the trigger for Dest to get forward and overlap, When a wide player, most of the times a wing-back, runs outside to fill in the space left by a winger going inside with or without the ball, this is called overlapping. with Messi often joining such phases to establish a triangle on the right.

While this enabled the hosts to vary their attacking threat, it was also beneficial in terms of freeing up the left flank. As a result, Barcelona were able to get forward in a variety of ways, though the final ball was often lacking from the hosts.

Real Madrid regroup in the second half

It was clear that Zidane was perturbed by the ease with which Barcelona manipulated the defense, and the visitors emerged a different beast in the second half. With Nacho forced off early in the first half, Lucas Vazquez came in as the emergency right back, and would offer an assured display in an unfamiliar position.

This was accompanied by Benzema and Vinícius’ positions, as the two played predominantly on the left. They were joined by Mendy who used his athleticism to make powerful underlapping Underlap means that the full-back joins the offensive play by playing on the inside of the winger he supports. This is the reverse of an overlap, where the full-back plays on the outside and the winger moves inside. runs through midfield, in order to either draw away a marker or receive in advanced areas. With Asensio coming in centrally, Valverde held a wider position on the right. Vazquez rarely strayed from the defensive line, in order to ensure that the visitors’ defense remained intact. 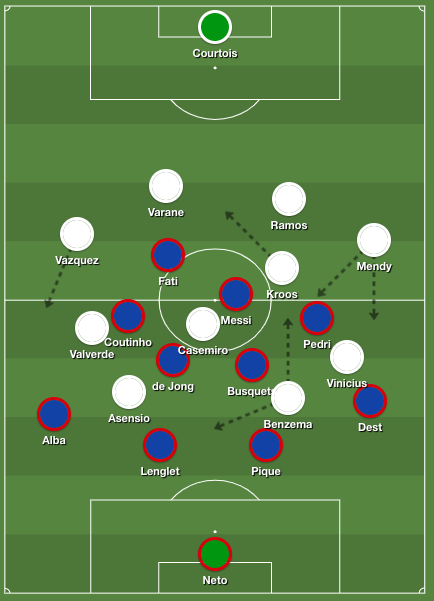 Madrid’s offensive set-up. For the most part the focus was on Benzema and Vinícius as the outlets, though Vazquez began to threaten on the right during the closing stages.

The slower pace of the second half was the result of Madrid sitting off the ball in a deep block, where they were happy to concede possession to a Barcelona attack that lost much of its dynamism. In the absence of a classic number nine to occupy the center-backs, Madrid’s defenders ensured that the channels were adequately covered in order to prevent the hosts from slipping in any through balls.

Given the height of the block, the space previously available to Fati was now compressed, and Vazquez’s excellent interceptions often robbed Messi off the ball before he could establish a good passing position. With Valverde closely tracking de Jong and Mendy patrolling the far side, all the avenues previously open to Barcelona were now closed off. 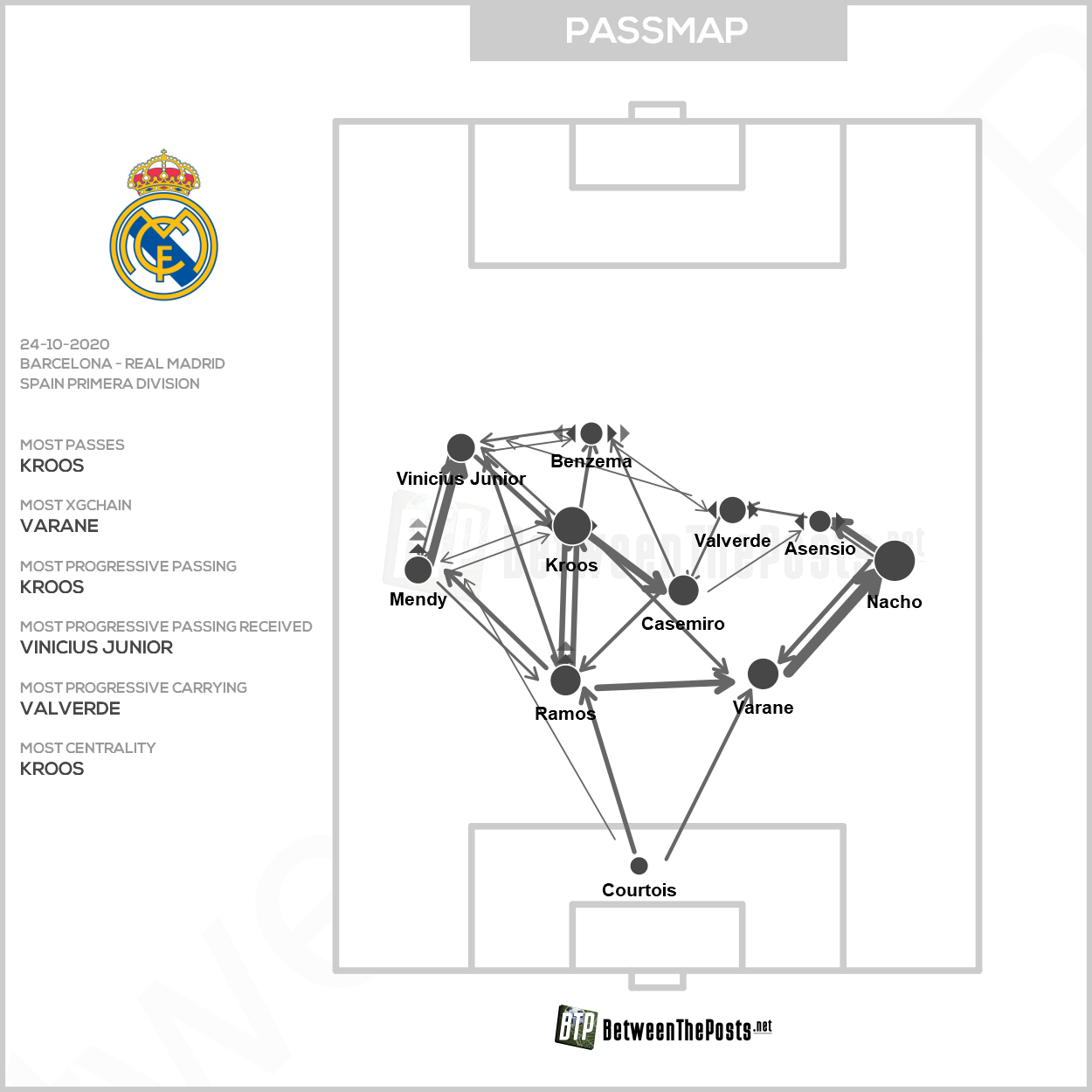 Drama is never from a fixture like this. In the 61st minute, a pull by Clément Lenglet on Ramos during a corner saw the intervention of the VAR. After a lengthy review, the decision was given in favour of the visitors. Ramos lined up to take the penalty and while Neto dove correctly, there was only going to be one winner in that duel.

The lead safely established, Madrid resumed their defensive stance and invited significant pressure from Barcelona. While they were relatively secure in this phase, they almost paid for the decision to sit back, with Coutinho directing a header wide from an excellent cross by Fati before Ramos’ penalty. Still, the presence of Thibaut Courtois meant that Madrid rarely looked in danger of conceding, while their own threat grew as the match wore on.

The visitors’ threat was evident during the closing moments of the match, as Vazquez began detaching himself from the defensive line to overlap Asensio on the wing. This was usually the product of Mendy slotting in as a third center-back, which freed up the right back to get forward. While Barcelona attempted to press in the first half on the basis of specific triggers, it was not something they applied throughout the game. This allowed Madrid time on the ball, especially when the switch was made to Benzema on the left.

The Madrid threat did not abate despite Barcelona’s best efforts, which included a massive triple substitution to bring on Antoine Griezmann, Ousmane Dembélé and Francisco Trincão. Despite the infusion of new faces for the hosts, it would be the Real Madrid substitutes who would have the final say, as Luka Modrić iced the game with a superb finish from an assist by fellow substitute Rodrygo Goes. 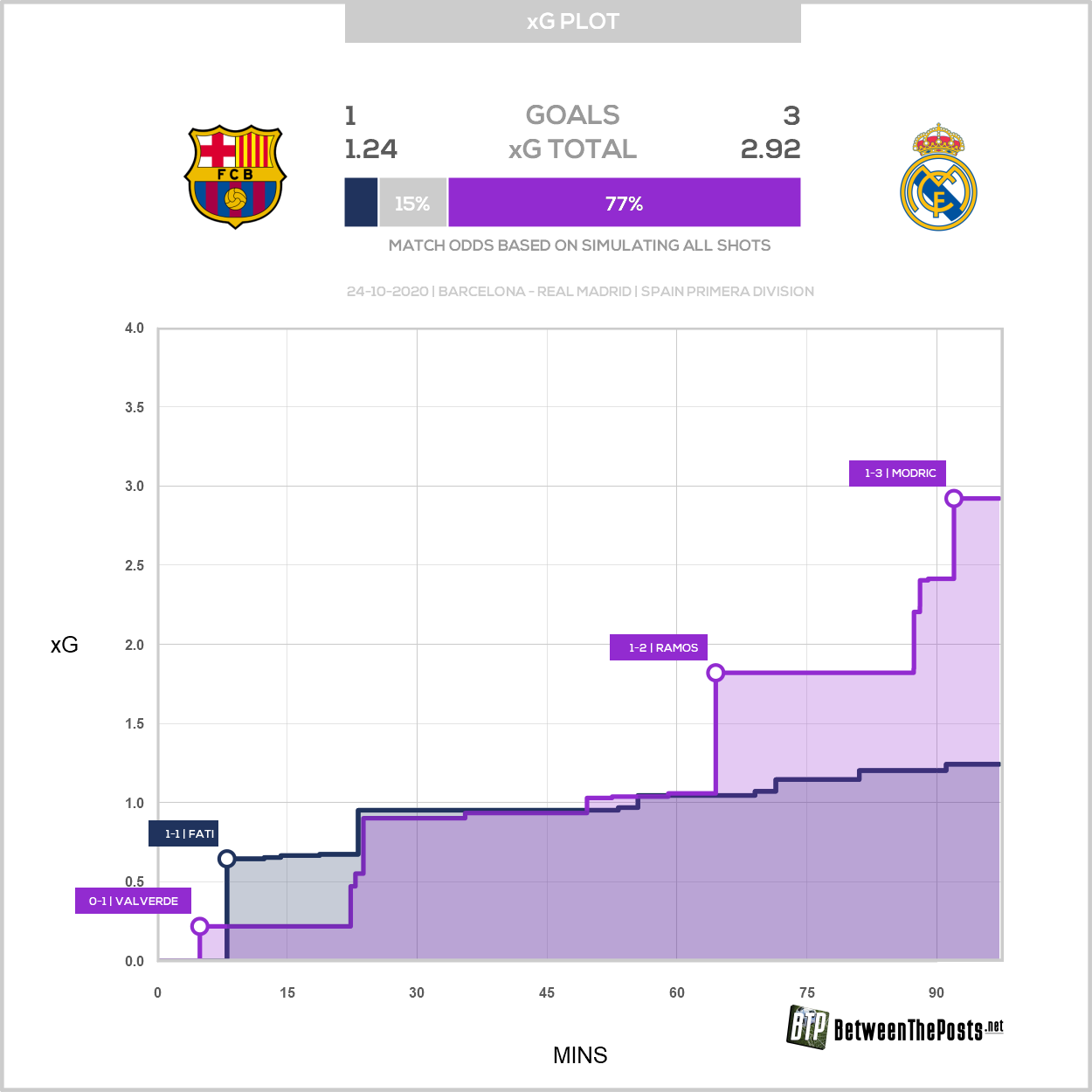 A Clásico win is always worth celebrating, but the manner in which Real Madrid nullified Barcelona’s threat must be hugely satisfying for Zidane and co. While it took a penalty to break the deadlock, the visitors were able to scrape through when it mattered after two defeats in their past two games. Questions around Zidane’s reliance on an aging core will likely continue, but the results so far make it hard to argue against the Frenchman’s decisions.

Another league defeat for Barcelona means the pressure on Ronald Koeman will be ramped up – his 4-2-3-1 system is working only in parts and needs to be rethought to get the best out of Messi and in particular, Griezmann. While Fati continues to thrive regardless of position, Koeman is yet to demonstrate the success of his new culture, and it will be interesting to see the team’s response after such a chastening Clásico defeat.