Barcelona won the battle for the top spot in LaLiga in a game where some of the stars had to shine to see off a dangerous Sevilla side. However, an injury picked up by Lionel Messi means bad news for the next few games.

It has been an odd start to LaLiga’s season with the “big three”, Barcelona, Real Madrid and Atlético Madrid all struggling, which allowed Sevilla to enter the ninth match day on top of the league. Under new manager Pablo Machín, the southerners had a bright start with sixteen points, beating Real Madrid in the process. Barcelona, on the other hand, had failed to win their last four LaLiga games, but were still just one win away from reclaiming the pole position.

There were no surprises in the lineups. With Samuel Umtiti and Thomas Vermaelen injured, Ernesto Valverde opted for the first eleven that brought success at Wembley with Clément Lenglet being the only new face compared to the team that drew in Valencia. Sevilla lined up with the same eleven players that faced Celta de Vigo.

Good Sevilla plan undone
Pablo Machín remained faithful to his 5-3-2 formation, that turned into a 3-4-3 in possession. Pablo Sarabia, who in the defensive phase played alongside Éver Banega and Franco Vázquez in a midfield trio, turned into an inside forward in dangerous offensive transitions as Sevilla tried to reach the final third very quickly. André Silva dropped to offer an outlet while Wissam Ben Yedder threatened to run in behind and the wing backs Jesús Navas and Guilherme Arana provided width.

In defense, Sevilla would use a high block in goal kicks to force a long ball: 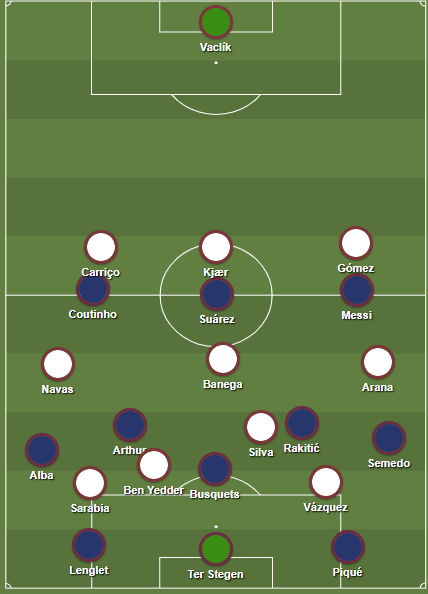 But otherwise, Sevilla dropped to a mid block and pressed only according to specific triggers such as a backwards pass: 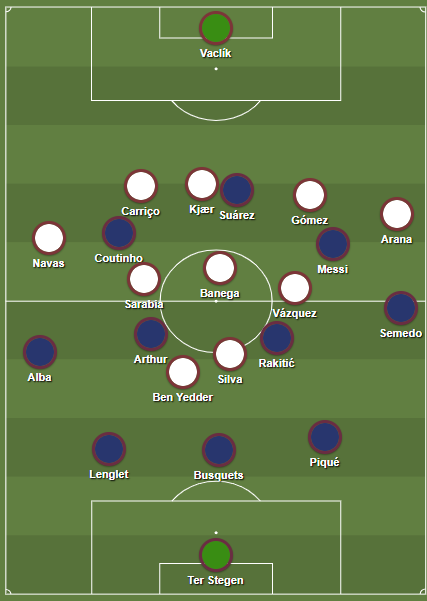 Barcelona building up, Sevilla defending in a medium block

Barcelona started in their usual 4-3-3 shape and could not have dreamed for a better start as they went ahead within two minutes. Nélson Semedo dribbled past “El Mudo” Vázquez and found Luis Suárez on the edge of the box, the Uruguayan passed back to Lionel Messi who had dropped deep, Sarabia just missed the interception which prompted Kjær and Carriço to both step out and close him down, leaving Philippe Coutinho unmarked. Jesús Navas tried to react, but arrived late as Messi delivered a perfectly weighted pass for the Brazilian to curl the ball into the top corner.

Sevilla almost hit back immediately on the counter in the sixth minute, exploiting Barcelona’s ineffective counterpress. Jordi Alba and Sergio Busquets pressed in the final third after the ball went wide, but Sevilla combined well to get out of it and suddenly Banega played a vertical pass to André Silva who had Ben Yedder in support against only Semedo and Gerard Piqué. With Semedo forced towards the center, Arana quickly made a run forward to exploit the huge available space on the left and took a shot that hit the post.

Threatening as Sevilla were, they ended up conceding a second as early as the twelfth minute. Ironically, it was after an indirect free kick following an offside. As with Barça goal kicks, Sevilla positioned themselves in a very high block, preventing all short passing options. Barcelona played long, like Sevilla wanted. Kjær won the aerial duel against Suárez, just like Sevilla intended. There were only Sevilla players to get to the second ball, as was the plan.

What was not part of the plan was Banega slipping, followed by Navas playing a bad backwards pass that gave the ball to Suárez. A quick pass to Messi was played who, one against one with his direct opponent Gómez, cut inside towards his left foot and scored one of his trademark goals towards the bottom corner.

Messidependencia? In his absence, Ter Stegen will do
Although Machín’s side was not doing much wrong tactically, individual mistakes from their side and individual brilliance from Barcelona’s made the initial difference. With Suárez having a good night and Messi looking unstoppable, Sevilla seemed in for a very tough night. However, in the sixteenth minute, Messi contracted an injury and had to be subbed off for Ousmane Dembélé.

The rest of the first half was quite uneventful, but the second half grew more and more open. Dembélé was being dispossessed too often and Barcelona’s counterpress was almost entirely absent. Alba was struggling to contain Navas on the, while Sevilla on the other end were exposing themselves more to counters. There was too much space between the lines and both teams were getting to the final third with ease.

This sort of end-to-end game suited Sevilla more at this point and it led to the first big chance of the second half. Navas delivered a great cross to André Silva, who headed perfectly towards the top corner, only to see Marc-André ter Stegen make a monumental save. Sarabia got to the rebound, but the German keeper reacted quickly and made himself big to make it a double save.

At this point, the 2-0 scoreline was very cruel for Sevilla, but things immediately got even worse. In another counter, Suárez was sent one-on-one against Carriço, the Portuguese defended terribly, committing to a tackle when he didn’t have cover, Suárez got past him and then got tripped by Vaclik in the box for a penalty. Suárez converted it himself to end his goal drought.

With that, it should have been game over, but Barcelona had so little control over the game that nothing could be ruled out. Sevilla finally found some luck in the 79th minute as a deflected shot from outside the box betrayed Ter Stegen and went in.

Machín’s side was back in the game and only Ter Stegen’s heroics, again, prevented a very nervy ending. In the 85th minute, Sevilla once again positioned themselves to force Barcelona to play a goal kick long, but this time it created an immediate chance in their favor. Gómez beat Dembélé to the ball and immediately assisted Sarabia, who, with Barcelona’s center-backs positioned wide, had a clear shot on goal. Ter Stegen made another wonderful save and, yet again, also saved the rebound.

In line with the craziness of this second half, this game got two more goals. First Ivan Rakitić killed the game with a great volley from the corner of the box. Then, already in added time, Luis Muriel gave Sevilla a deserved second goal from another break.

Takeaways
This game is a good example of how individuals can make the difference. Barcelona were not tactically superior to Sevilla, but a combination of brilliance by Messi – who was on the field for only fifteen minutes, but played a huge part in building a two goal lead – and Ter Stegen – denying two almost certain goals – and some very costly individual mistakes by Sevilla players made the difference.

Barcelona will have a real challenge ahead of them, playing some important and difficult fixtures without Messi. Tonight, they played the whole game in the lead and showed a worrying lack of ability to control the game and contain Sevilla. Having to chase a game, they could be even more vulnerable to counters.

On a positive note, Barça countered well themselves and created as many chances as Sevilla did in the second half to maintain a comfortable goal difference, but this chaotic scenario was not ideal and on another day could have a different ending.

Sevilla showed some good principles despite the result and have reasons to be optimistic. It is not easy going to the Camp Nou and practically start the game one goal down. Sevilla can be proud of how much problems they created to Barcelona’s defence. 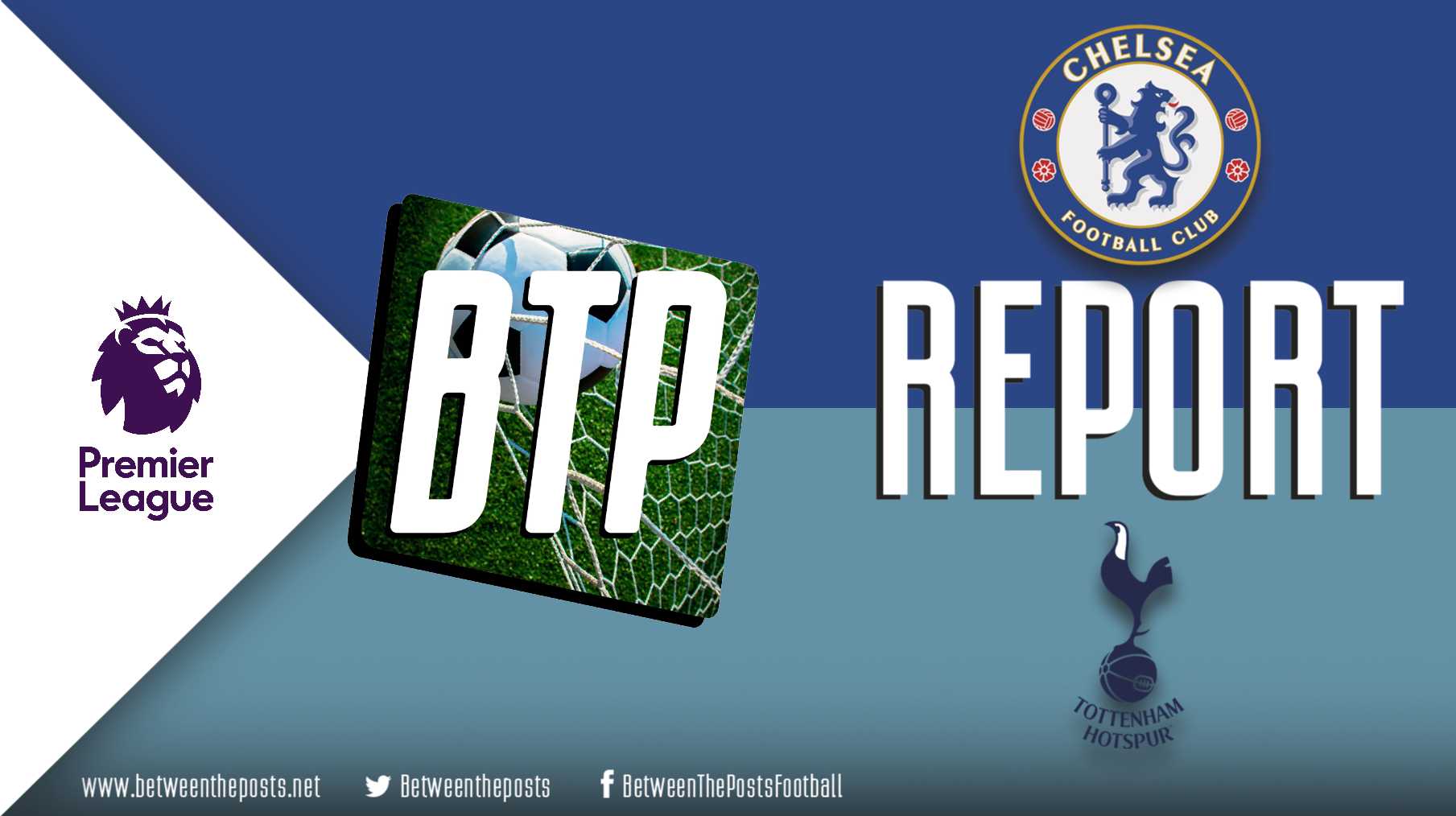 Chelsea – Tottenham Hotspur: Lampard Brings Out A Back Three To Outwit Mourinho Again (2-1)