Led by the free-roaming Arthur and Frenkie de Jong and an energetic Ansu Fati, Barcelona quickly took down a Valencia team that was visibly shaken by the recent firing of their coach. During the second half, Griezmann’s increased interventions in the game and Suarez’s entrance produced even more goals for the home side.

With Messi still recovering from injury, it is still early to draw any definitive conclusions about the game plan that coach Ernesto Valverde will use for his 2019/20 Barcelona. However, one of the tactical themes of Barcelona’s first four LaLiga games without Messi has been the aggressive positioning of their central midfielders.

While in previous seasons Barcelona used a double pivot (or sometimes even triple pivot) midfield in deep zones in front of the opposition’s defensive block, this season they deploy two interior midfielders in between opposition lines, with only the holding midfielder staying deep. The disintegration of Barcelona’s double pivot is best represented by Valverde benching Ivan Rakitić, who was Valverde’s key man in that midfield structure over the last two years.

Against Valencia, Barcelona came out with their usual 4-3-3 shape. The defensive line featured the usual suspects (Semedo – Piqué – Lenglet – Alba) while Arthur Melo finally returned to Barcelona’s starting lineup to form a midfield trio with Sergio Busquets and Frenkie de Jong. Given Rafinha’s departure to Celta and all the injuries of his starting forwards, Valverde continued his use of youth academy products in the front lines. Carles Pérez and 16-year-old Ansu Fati -in his first senior team start -played on the wings alongside Antoine Griezmann, who played the lone striker role, often dropping into midfield.

On the other hand, Valencia find themselves once again in turmoil after two years of relative stability under coach Marcelino García Toral and sporting director Mateu Alemany. Tensions had risen between owner Peter Lim and the Marcelino – Alemany duo over the last year and finally blew up this week with Lim firing Marcelino.

He claimed that he got fired “for winning the Copa.”

Albert Celades -Spain’s former national U21 team coach -has been appointed as head coach instead. Given this chaotic situation, there is little we can say about Valencia tactics at the moment. We can only wait over the next few weeks and see if Celades will continue using Marcelino’s game plan (4-4-2 low block) or do something different.

Against Barcelona, Celades – who barely had a couple of training sessions with his new team -stuck to the 4-4-2 shape used by his predecessor. The goal of former Barcelona goalkeeper Jasper Cillessen was defended by center-backs Ezequiel Garay and Gabriel Paulista as well as fullbacks Daniel Wass and José Luis Gayá. Midfield featured a double pivot of captain Dani Parejo alongside Francis Coquelin, with Ferrán Torres and Gonçalo Guedes on the wings. Up front, the striker duo of Rodrigo Moreno and Kevin Gameiro was fielded.

De Jong and Arthur are given positional freedom, Fati thrives in the final third

Against Valencia we finally got to see the first start of the Busquets – Arthur – de Jong trio, arguably the three most influential midfielders in Barcelona’s squad. Making them compatible to each other and to Valverde’s new midfield structure is not a trivial task, since the natural behavior of all three is to direct play from deeper positions. Valverde’s solution to this tactical puzzle gives de Jong and Arthur more positional freedom.

In the first three LaLiga games, the central midfielders in Barcelona’s 4-3-3 had rather static positions in between the opponents’ lines, with little freedom to move horizontally or vertically. In contrast, while this game featured Arthur playing mostly on the left side and de Jong mostly on the right, both players switched sides and roles often. If Arthur dropped deep to collect the ball, de Jong would move in between the opposition lines, and vice versa. Sometimes de Jong would switch sides with Arthur up on the left side, sometimes he would show up on the right wing, trading passes with winger Carles Perez. 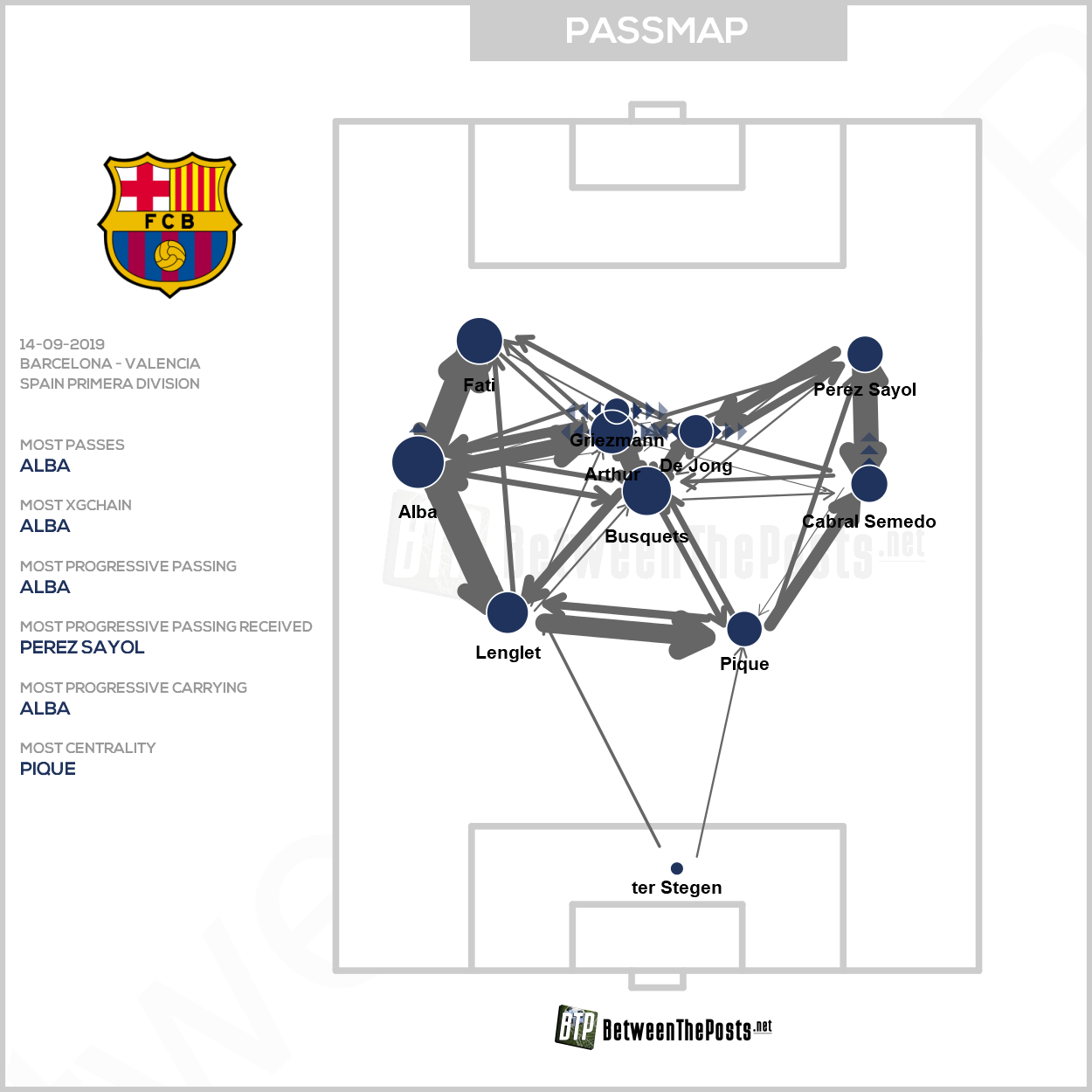 In the absence of Messi, Barcelona racked up most of their passes on the left side rather than the right, with Lenglet – Alba – Arthur – Fati being the team’s main passing circuit. This attracted Valencia defenders and open up spaces on the right side that could be attacked by De Jong and Pérez. This became readily apparent in Barcelona’s second goal, in which Fati beat his man and assisted de Jong as he ran into the box.

While Barcelona’s midfield trio were quite good at keeping possession of the ball during the first half (73 percent vs Valencia’s 27), they were not the most consistent at making the required change of pace going into the final third. The one-third of the pitch that is closest to the opposition’s goal. Only the occasional de Jong dribbling run contributed in this regard. This helps to explain why Barcelona only produced six shots during the first half, with the team depending too much on the individual inspiration and one-versus-one actions of Ansu Fati in the final third. In the absence of Messi, Griezmann was supposed to lead his team in the final third, yet he contributed relatively little both in buildup and finishing collective plays.

With no time to change anything, Celades and his new team attempted to stick to the game plan used by his predecessor Marcelino, defending Barcelona with a 4-4-2 low block. Valencia (alongside Leganés) have the most conservative defensive block of La Liga, and rarely do they press in the opposition half. Therefore, Barcelona’s defenders and Busquets had all the time and space in the world to get the ball to Arthur and de Jong. This might be a good time to mention that the teams who’ve had better results against Barcelona this season (Athletic Bilbao and Osasuna) were the ones who pressed more aggressively. 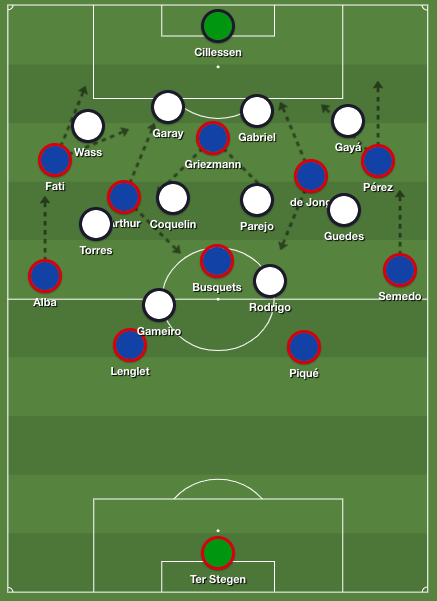 Under Marcelino, Valencia usually compensated for this lack of pressing with their well-organized low block that closed off opposition access to the box and forced the opponent to shoot from poor positions. This did not happen in the beginning of this game, with Valencia’s uncharacteristically shaky defense of their box led to two early goals.

As the minutes went by, Valencia players calmed down and their defense started repelling Barcelona’s attacks without any mistakes. The team did not have much of an attacking structure, mostly sending long balls to their strikers and hoping for the best. However, from time to time, striker Rodrigo managed to get the ball and do his usual job of directing Valencia’s attacking plays. One of Rodrigo’s interventions led to Gameiro’s 26th minute goal. Despite Rodrigo’s best efforts, Valencia mostly struggled to break past Barcelona’s counterpressing After losing possession, a team immediately moves towards the ball as a unit to regain possession, or at least slow down the pace of the counterattack. and create good counterattacks.

Griezmann livens up and Suárez joins the party

After a few initial minutes of Valencia attacks, the second half went back to the status quo of the first: Barcelona passing the ball around in Valencia’s half of the pitch. But this time, the one directing Barcelona’s attacks in the final third was Griezmann, who intervened far more effectively than in the first half. Griezmann’s efforts were soon rewarded as in the 51st minute, right after a corner kick, his shot from outside the box was stopped by Cillessen but slotted into the goal by a marauding Piqué, who had managed to pick up the rebound.

In the 60th minute, Valverde substituted the outstanding Fati for Luis Suárez. A minute later, Suárez received the ball right outside the box, feinted to trick his defender, and with his second touch of the game, scored with a pinpoint shot from that position. A goal from a true killer. 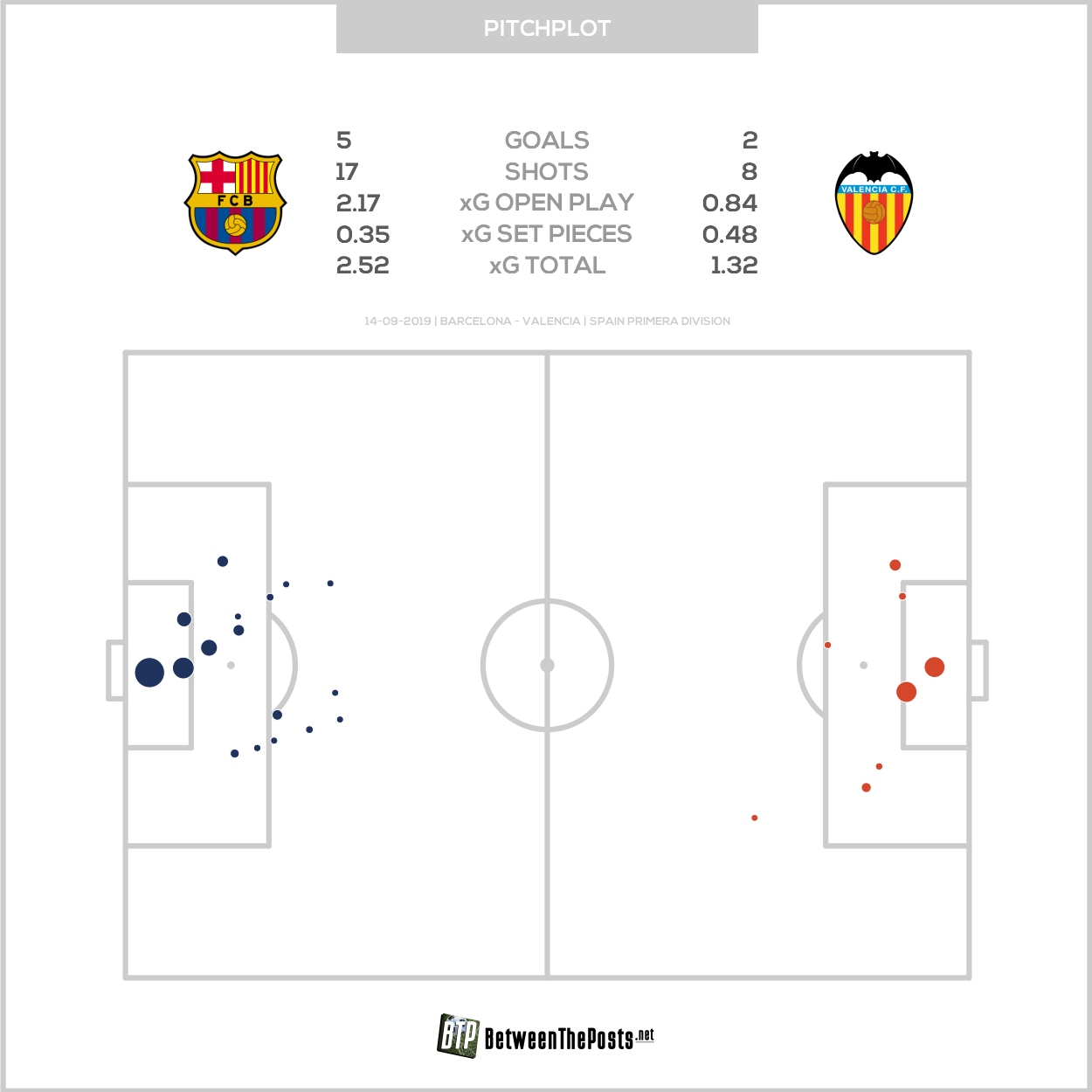 At this point, what was left of Valencia’s collective structure had mostly collapsed. After Barcelona’s fourth goal, Celades substituted his wingers Torres and Guedes for Denis Cheryshev and Kang-In Lee, perhaps in hopes of a more coherent attack. The compactness of their defensive block had disappeared, with Arthur and de Jong having a lot of space in between lines to dribble past Valencia midfielders and start dangerous attacks. Valverde would soon replace both midfielders with Arturo Vidal and Ivan Rakitić, but the aggressive behaviour of Barcelona’s central midfield continued, with both subs also taking up positions in between Valencia’s lines. Barcelona’s good evening was capped with yet another showcase of outstanding Suárez shot making for the fifth goal.

This confused Valencia might have not been the strongest opposition for Barcelona, but the actions of the Arthur – de Jong midfield duo look promising, nonetheless. Valverde seems to be on the right track when it comes to finding the right balance of positional freedom and discipline for his midfielders. However, we are yet to see Barcelona’s new midfield structure successfully overcome aggressive pressing schemes, and we do not know yet if this structure will stay in place once Messi comes back to the starting lineup.

As for Valencia…there are little to no tactical conclusions that can be drawn out of this game. The club is in crisis at the moment and we can only wait and see what next steps Celades will take. But it’s hard not to be disappointed to see Valencia once again being their own worst enemy. Such a pity after their fantastic season last year. 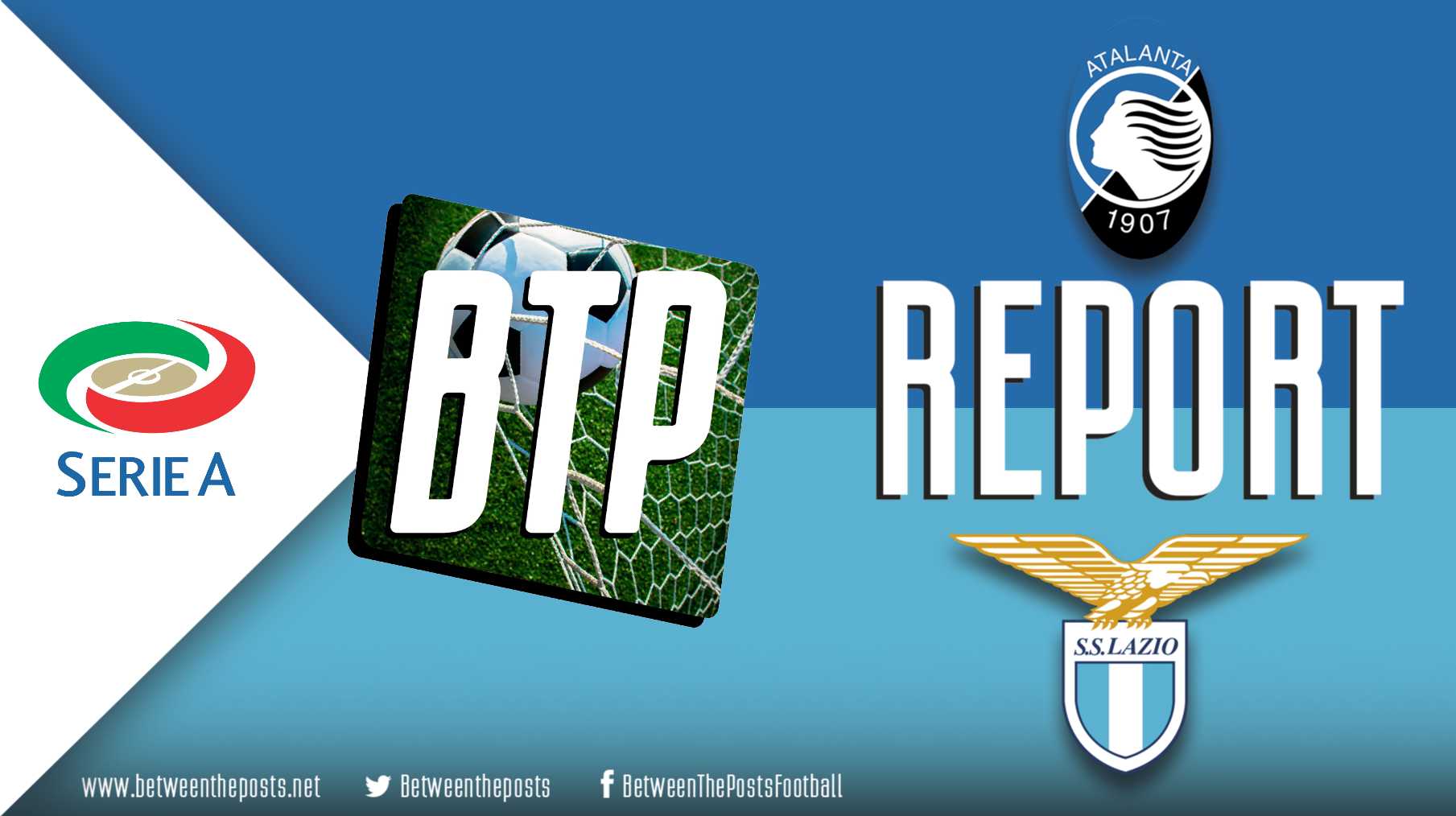 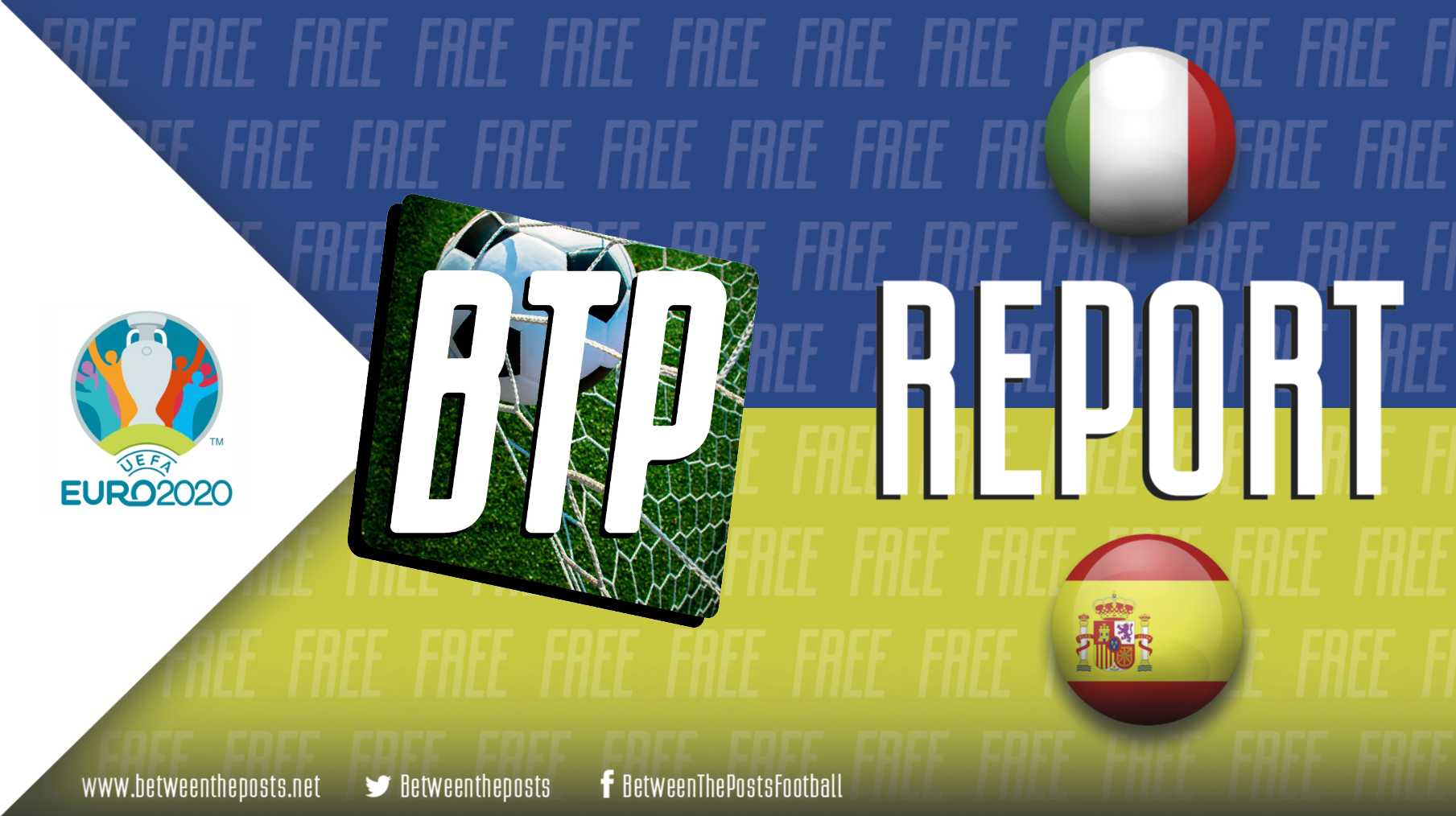