There were to be no surprises here as Leverkusen outdueled the visitors in a frenetic and fun encounter. Goals from Kerem Demirbay and another starring performance from Mousa Diaby were enough to put Stuttgart away, who attempted to adapt but were undone by their defensive errors.

Following a run of three consecutive defeats that dented their Champions League hopes and knocked them out of the DFB-Pokal, Bayer Leverkusen were looking to bounce back against a Stuttgart team that has impressed in its return to the Bundesliga. After a bright start, the home side’s season looked to be petering out in the same way it had in the previous campaign, which prompted Leverkusen Peter Bosz to return to a trusted starting line-up.

Leverkusen set out in a flexible 4-3-3 shape, with the defensive line of Timothy Fosu-Mensah, Jonathan Tah, Edmond Tapsoba and Daley Sinkgraven protecting Lukáš Hrádecký’s goal. The midfield consisted of Charles Aránguiz at the base, with Florian Wirtz and Kerem Demirbay on either side. After missing out in the defeat to Leipzig, Patrik Schick returned to lead the line, with Leon Bailey and Moussa Diaby reverting to their traditional roles as wingers.

Stuttgart’s return to the Bundesliga has gone reasonably well, with Pellegrino Matarazzo’s side looking like a top ten outfit despite the occasional wobble. After famously ending Lucien Favre’s run as coach of Borussia Dortmund, the team has struggled, picking up just eight points from a run of nine fixtures. However, the starting line-up has not changed significantly over this period, and several notable names continued against Leverkusen.

The visitors were set out in a 3-4-3 shape, with Konstantinos Mavropanos, Waldemar Anton and Marc-Oliver Kempf protecting Gregor Kobel in goal. Ahead of them sat Wataru Endo, and Orel Mangala, flanked by the wing-back pair of Silas Wamangituka and Roberto Massimo. Nicolás González led the line for this game, with Philipp Förster and Mateo Klimowicz providing support in attacking midfield roles.

Individuals over system for Leverkusen

In contrast to Leverkusen’s usual displays, the first half was a case of individuals succeeding despite the system than being elevated because of it. This is because Bosz’s usual system of building up was bypassed in the game, both to take advantage of Schick’s height as well as to nullify Stuttgart’s pressing game plan.

While nominally laid out in a 3-4-3 shape, Stuttgart were fluid in how they positioned themselves, often ending up in a formation resembling a 3-2-4-1 shape. Here, wing-backs Wamangituka and Massimo would mark the fullbacks, while the forwards would split to mark the center-backs. Occasionally, González would leave his man to rush Hrádecký into a decision, which would see one of Förster or Klimowicz (whoever was the free man) move up to occupy the defender. Behind them, Mangala often marked Aránguiz, with Endo further behind but ready to offer support should his midfield partner get bypassed. 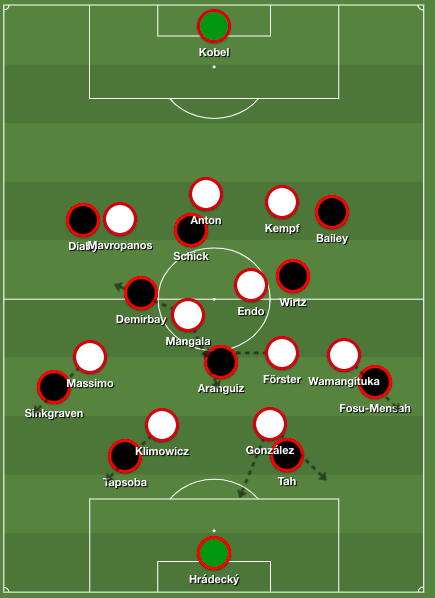 Stuttgart’s 3-2-4-1 pressing shape, with the wing-backs taking up advanced positions.

While Leverkusen are no strangers to playing out of pressure, the first half aaw few instances of the buildup that is common to this team. Though Aránguiz occasionally dropped to the side of Tah to create a back three, this was infrequent, as Hrádecký and the defenders often chose to go long. Here, the pass was often meant for Schick to play a knockdown into one of the midfielders who could then initiate the attack, or into the left channel for Diaby to create a speed mismatch against Mavropanos.

Several passes were played by the fullback into the winger on his side, again to put them in positions where they could attack from out to in and create havoc. However, this did not work too well, with Leverkusen finding much more joy when individual ingenuity was allowed to flourish in the final third. The one-third of the pitch that is closest to the opposition’s goal.

With Stuttgart committing nearly five players to the press, long passes were a way for Leverkusen to attack the visitors directly. For the home side’s goals, it was Diaby and Demirbay doing most of the damage, with Aránguiz playing an important role in dissecting the visitors’ lax defending.

As the home side pushed the ball forward, Stuttgart’s low block created chaotic situations and structures, from which Aránguiz was able to feed Diaby in zone 14. Zone 14 is a coaching term that refers to the part of the pitch just in front of the opponent’s box. Completing passes in this area of the pitch is a sign of territorial dominance and is usually associated with a good performance. The winger took Mavropanos out of the game with a tremendous piece of skill, before attempting to place his shot past Kobel. While the keeper was able to make the save, Demirbay showed impressive skill in turning it in with the outside of his foot. Here, it was the high positioning of the wing-backs and the space between the defensive and midfield lines – where Leverkusen had a three-versus-two advantage, that allowed the midfielder to score, with Leverkusen moving into the lead.

The space between the lines was also exposed for the second goal, as Mavropanos had split from Anton when defending a throw. With Bailey’s touch changing the trajectory of Aránguiz’s pass, the void between the center-backs was exposed, as Demirbay had a free run on goal to double Leverkusen’s lead.

Again, it was surprising to see how relaxed the Stuttgart defenders were, with Leverkusen again having an advantage in terms of how they attacked. This allowed them to capitalize on the visitors’ mistakes, adding to their woes after striker González had to be subbed off for Sasa Kalajdzic following an injury. 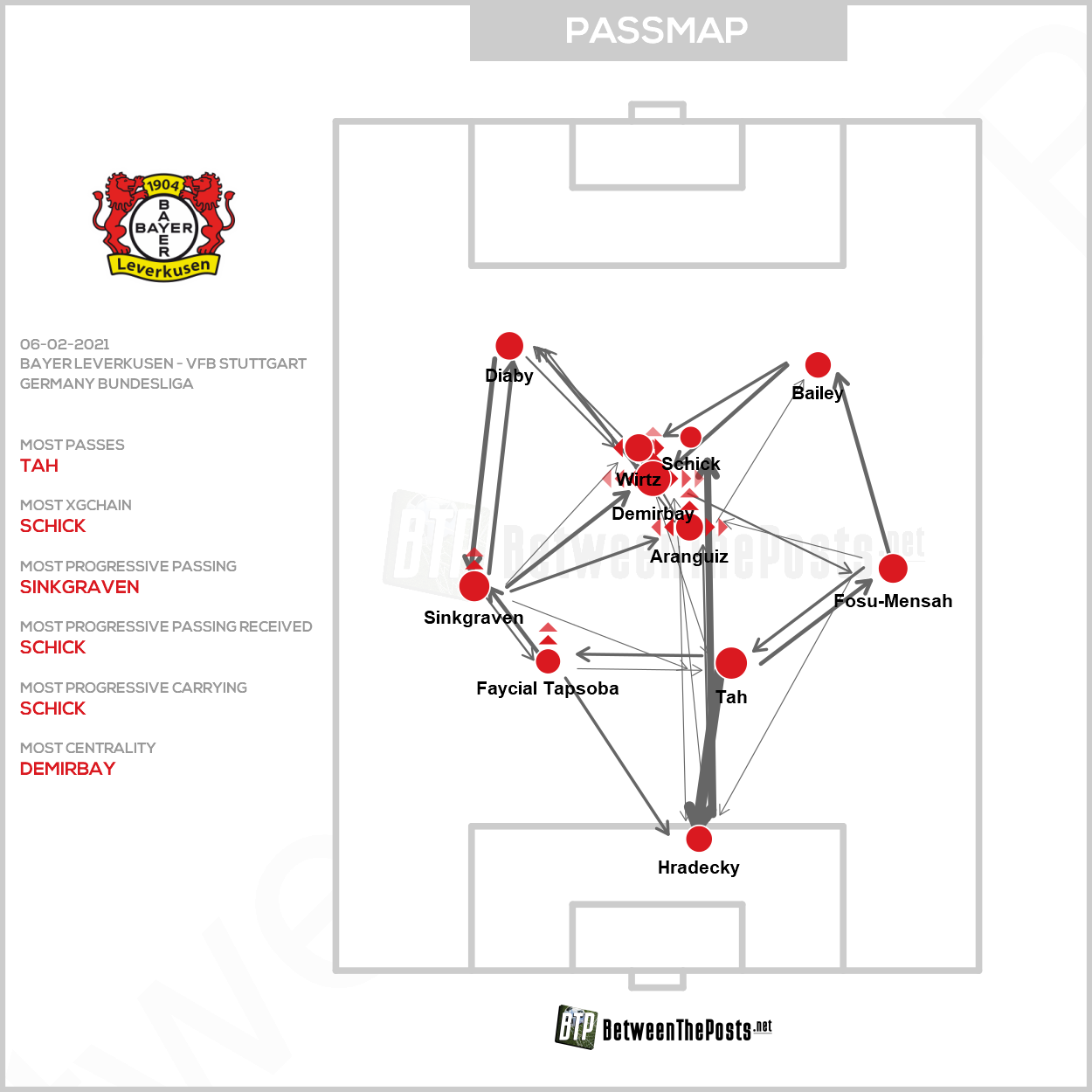 The start of the second half saw two substitutions for the visitors, with Erik Thommy coming on for Massimo and Naouirou Ahamada replacing Kempf. This saw two important changes – first, Endo dropped into the middle of the defensive line with Anton moving to left center-back, and second, Wamangituka moved over to the right, with Thommy taking over as the left wing-back while Ahamada joined Mangala in the middle. The changes were seemingly made to avoid the kind of mistakes that characterised the first half, as well as to allow Wamangituka to take advantage of his pace by narrowing the Leverkusen defense using the three forwards. 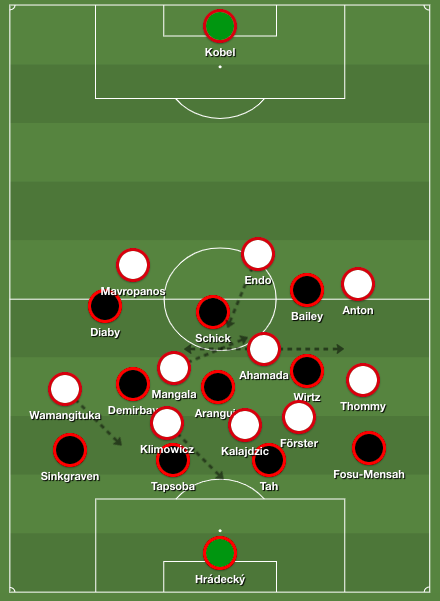 The beginning of the second half saw Stuttgart assert themselves; however, Leverkusen always the threat of the counter.

Interestingly, it was not the wing-back but Kalajdzic who pulled one back from Stuttgart, outmuscling Tapsoba before chipping Hrádecký in one move. It followed a period where the visitors were assertive with the ball, though without really making inroads on offense. However, the joy would not last long, as another excellent move from Leverkusen restored the two-goal cushion.

After Diaby attempted to chip Kobel, a rapid counterpress After losing possession, a team immediately moves towards the ball as a unit to regain possession, or at least slow down the pace of the counterattack. saw Leverkusen retake possession, with Bailey slipping Diaby behind the defense. From that point, it was easy for the winger to beat Endo and pass for Bailey, who did not make a mistake from close range.

As Stuttgart attempted to hit back, the same flaws that undid them in the first half came back to bite them. While they piled on in a bid for the goal, Leverkusen were able to remain compact and resilient, while keeping alive their chance of hitting on the counter with Wirtz and their wingers. This exact scenario unfolded in the 67th minute as Wirtz received a pass from Bailey in a clear three-versus-two situation with Diaby on the outside and Schick between the center-backs. A pass to the winger saw the ball return to him for a perfect cross, with the midfielder sending a looping header over Kobel for a goal that effectively iced the game. 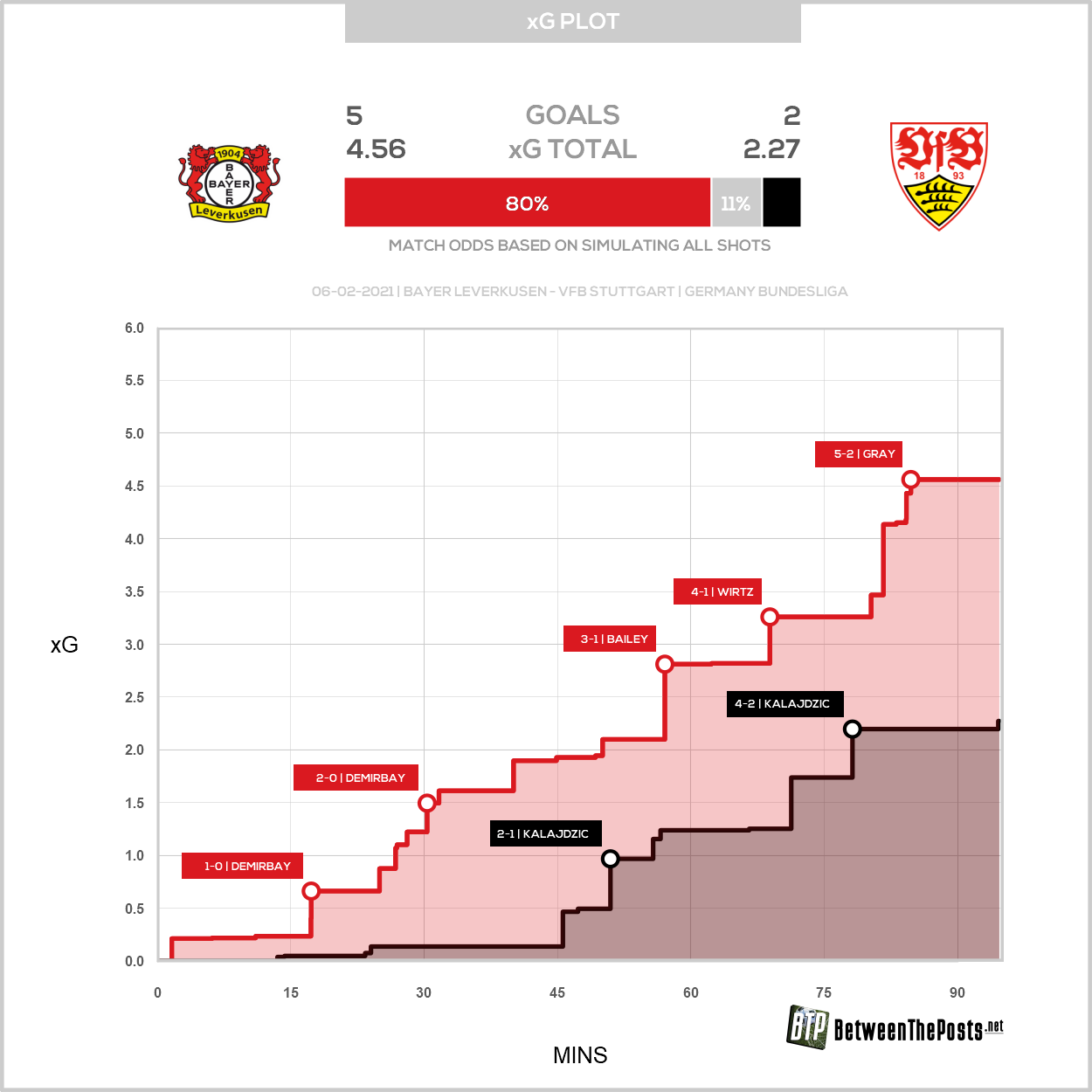 This was a much-needed victory for Bosz after his team’s travails in recent weeks and it will be interesting to see what happens in the fight with Dortmund for a top four position. New signings Timothy Fosu-Mensah and Demarai Gray have made encouraging starts, and the team will be looking to bring Palacios and Frimpong into the mix soon.

A setback for Stuttgart should not overshadow what has otherwise been a good first season in the Bundesliga. With internal rumblings at the club settled, they will look for a top ten finish this season, with the capability to build on the progress that has already been made. 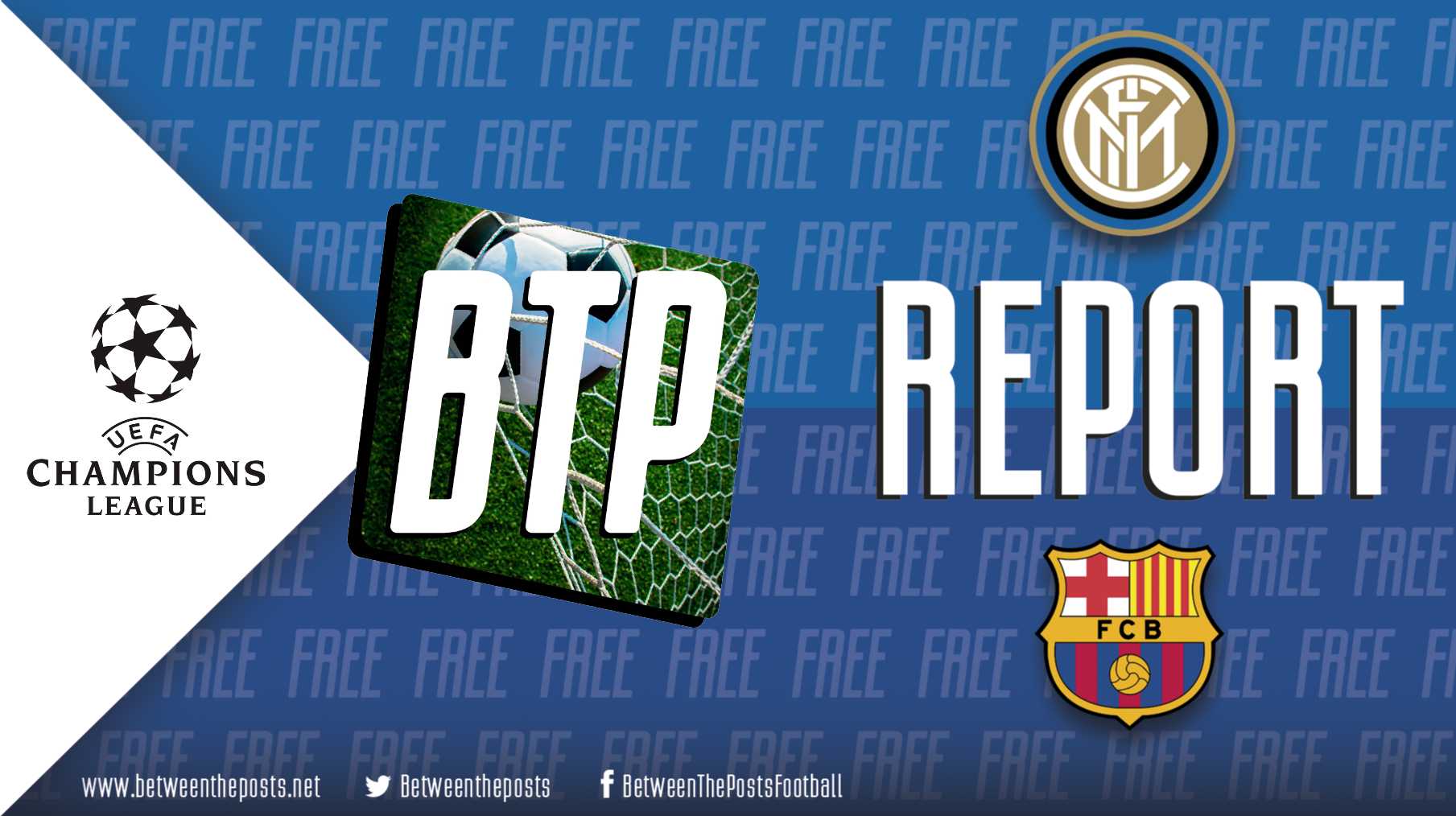