In yet another shellacking of Borussia Dortmund at the Allianz Arena, interim manager Hansi Flick’s tactical choices paid dividends for Bayern Munich.

Sacking Niko Kovač was a rather ruthless decision. He won the double last season, and only lost three official matches in the 2019/20 season. At the time of his sacking, our model still favored Bayern to win the Bundesliga title by a big margin. Besides, Bayern weren’t half bad last season either, they just converted their chances badly, especially compared to Dortmund.

The reasons for his dismissal were less about results and more about tactics. With Kovač at the helm, Bayern never developed into a side that kept up with the latest tactical trends in Europe, like well-structured positional play from the back or a good counterpress. After losing possession, a team immediately moves towards the ball as a unit to regain possession, or at least slow down the pace of the counterattack.. It is also suggested that Kovač had long lost the dressing room.

His successor’s first game as Bundesliga manager ever therefore turned out to be Der Klassiker against Borussia Dortmund. No pressure, Hansi Flick! After a relatively straightforward 2-0 Champions League win over Olympiacos, Flick decided to keep the exact starting eleven from that game.

Some of his decisions differ vastly from Kovač’s. Technical playmakers like Thiago and Coutinho? Not for now, as Flick composes Bayern’s midfield of Joshua Kimmich, Leon Goretzka and Thomas Müller, while two genuine wingers flank red-hot striker Robert Lewandowski. As three potentially starting center-backs are still unavailable, the defense is formed by makeshift left back Alphonso Davies, David Alaba and Javi Martínez as the center-backs, and Benjamin Pavard at right back.

Dortmund manager Lucien Favre has had some early struggles so far this season, as well, as his incredibly talented group of offensive young players is yet to put together a string of good results. For this match, Favre was unable to field captain Marco Reus from the start, even though he would come on as a substitute later. In Dortmund’s nominal 4-2-3-1 shape, there were no surprises from a personnel point of view, as Mario Götze took up his position as false nine A striker that constantly drops deep and plays like a number ten. , again, supported by Jadon Sancho, Julian Brandt, and Thorgan Hazard just in behind.

The first minute is also the last minute Dortmund press

In the very first minute, Dortmund pressed Bayern in a way that is very common in top European football; three midfielders man-mark the three opposing midfielders, one winger presses inside towards a center-back, while the fullback ventures forward to press the other fullback. Naturally, this leaves a three-versus-three situation at the back, something Bayern almost made use of as early as the first minute.

Dortmund right back Achraf Hakimi decided to press Davies, as Sancho pushed inside towards Alaba, who punted the ball towards Bayern’s forward line. The second ball fell for Müller, who nearly exposed Dortmund’s awkward defensive positioning in the center. His pass was not weighted well enough, or he could have put Lewandowski one-versus-one with Dortmund goalkeeper Roman Bürki within the opening minute. 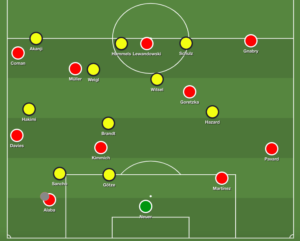 Perhaps scared by this early openness, Dortmund did not press at all after that initial burst of aggressiveness. Instead, as we have come to know from his teams, Favre’s side formed a zonal 4-4-1-1 / 4-4-2 shape against Bayern’s early buildup. Because Bayern started their buildup with two central defenders and Kimmich and Goretzka against Dortmund’s nine and ten (Götze and Brandt), this meant any form of pressing was impossible.

The team that did press – frantically – was Bayern Munich. Akin to Dortmund, wingers Kingsley Coman and Serge Gnabry would tuck inside to press either Mats Hummels or Manuel Akanji and the fullbacks they left open would be the responsibility of Davies and Pavard.

In the middle of the pitch, Bayern’s all-German midfield – most notably Müller, who put in a fantastic defensive shift, and Kimmich – did a stellar job in taking Witsel out of the match. 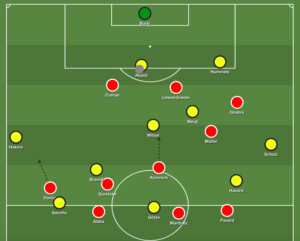 The first goal of the match originated from two good counterpressing situations in Dortmund’s defensive third If you divide the pitch in three horizontal zones, the defensive third is the area closest to a team’s own goal. – one by Müller and one by Kimmich. The ball pinballed towards Pavard, who put in a volleyed cross, which was finished by Lewandowski, meaning Bayern took the lead after seventeen minutes of play.

Dortmund give up too many turnovers in their own half

After the opening goal was scored, the overall tactical theme of this match presented itself more clearly – Dortmund were largely unable to play the ball to a yellow jersey and thus barely reached Bayern’s half through coordinated buildup play. Most notably on Dortmund’s right side, both Hakimi and Sancho had off nights. Uncharacteristically, Hakimi gave the ball away multiple times, even when Bayern were not pressing as hard as they could.

The lightly injured Sancho – who got little service and did little with the service he got – was taken off after 35 minutes for Raphaël Guerreiro, which added a bit of press-resistance and maybe more control off the ball, but made Dortmund a far worse team in moments of transition from defense to attack. The young Canadian, Davies, who had never played left back up until a few weeks, thus passed his test against one of the world’s best young wingers in Sancho with flying colors. 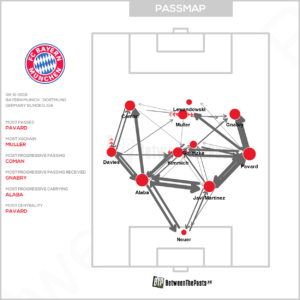 The first minute of the second half provided an excellent argument in favor of VAR, as Thomas Müller was flagged offside initially in the play that led to Bayern’s second goal of the match. Due to the new set of rules that has come along with VAR, the play had been allowed to continue, and after exactly sixty seconds in the second half, Gnabry tapped the ball into an empty net. After one minute, the referee got a sign that Müller had indeed been onside and the goal was given. It was a flawless execution and exactly what VAR was meant for in the first place – correcting clear and obvious errors.

Nobody ever mentions it when VAR works flawlessly.

Decision rightly overruled by VAR, goal given. Would've been a monstrous error pre-VAR, in one of the biggest games of the Bundesliga season. pic.twitter.com/mygYh5Irzc

What’s worse, the decision by the linesman or Hakimi’s defensive positioning?

From then on, it was plain sailing for Bayern – even more than it had been before half-time. Favre did not adjust tactically, as he almost never does, except changing Götze and Hazard around for five minutes. He proceeded by introducing Reus and Paco Alcácer in a double substitution around the hour mark.

Dortmund had their biggest chance of getting something from the match in the 68th minute, when substitute Alcácer was on the end of one of Dortmund’s rare offensive transitions. Showing his fantastic athleticism, Hakimi took advantage of the space behind Davies and put in a good cross, which was only half intercepted by Martínez, yet Alcácer could not convert from close range.

Between the Alcácer chance and Bayern’s third goal – 75th minute, fantastic Müller assist, calm Lewandowski finish – Dortmund were kept at bay in their own half, as Bayern attacked and quickly regained possession time and time again.

Now three goals up, the pitch turned into a playground, something that was epitomized by a no-look outside-of-the-boot pass, completed over thirty yards by substitute Philippe Coutinho in the run up to the fourth goal. He set up another substitute – Ivan Perišić – who beat Hakimi one-versus-one and put in a cross that was clumsily worked into the net by Hummels. 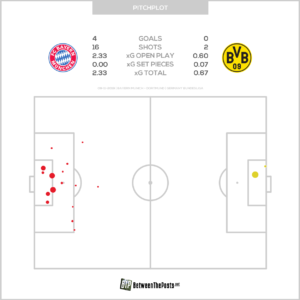 For a club that sacked the manager one week ago, Bayern seem to have a pretty fine football team at the moment. Sure, one could also interpret these back-to-back wins under Flick as a reaction to the sacking of Kovač. Underlying data suggest Bayern have been fine this season and, if Flick continues his promising start in the coming weeks and hands over a well-oiled team to a new top manager, there is no question whatsoever who will win the Bundesliga this season.

As for Dortmund, it’s tempting to think of more offensively minded managers coaching them than Favre, with the likes of Sancho, Brandt, Hazard and Reus. However, we’re not in the business of speculating; we know Favre will keep this sterile 4-2-3-1 shape in place. On the day, it proved no match for Bayern’s aggressive brand of football. 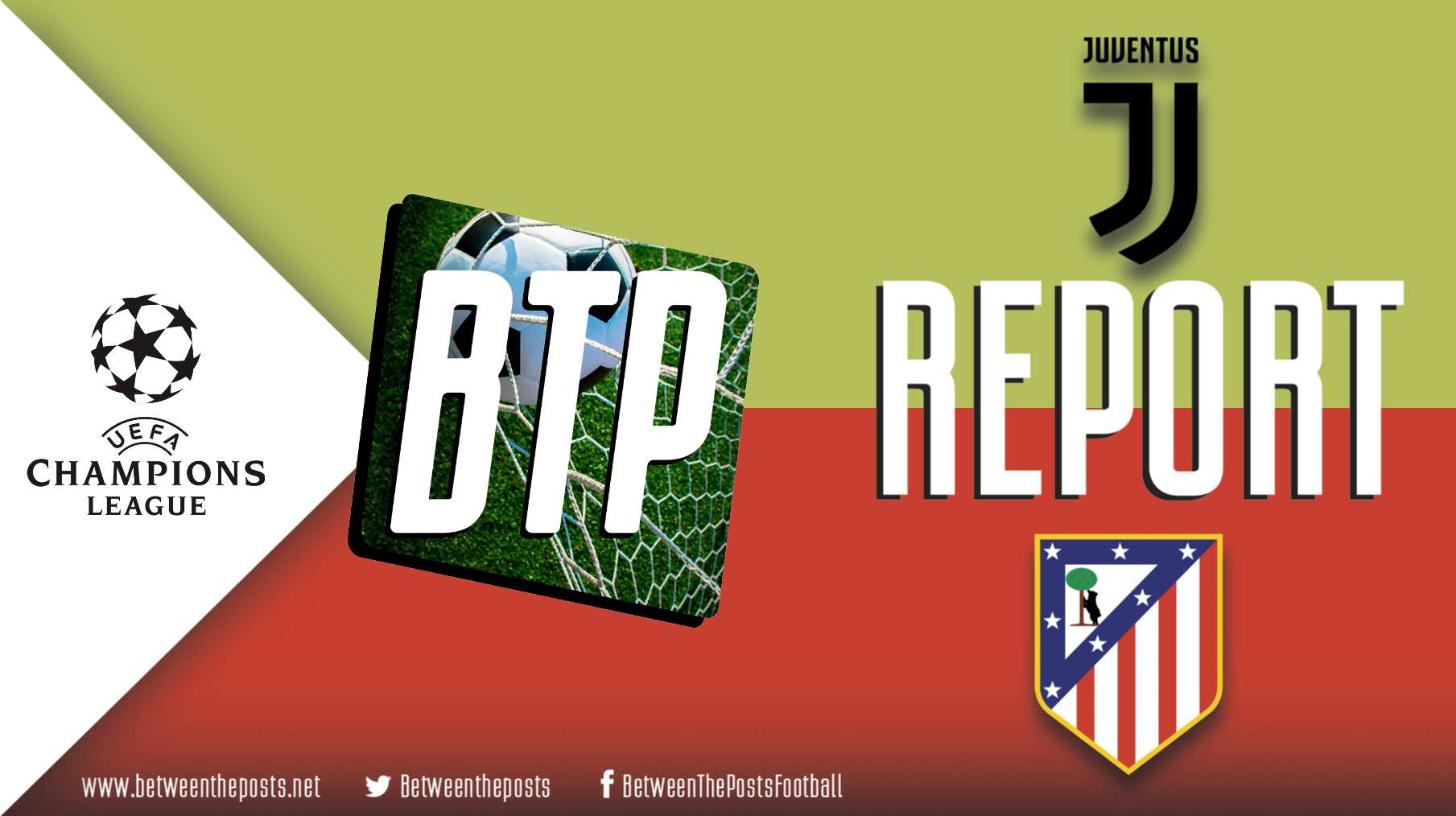