After dropping points in two consecutive Bundesliga matches – a shock, by the lofty standards for the German Rekordmeister – Bayern almost lost at home to Ajax, thanks to a gutsy game plan by manager Erik ten Hag and even better execution from his players.

Bayern are still one of the best teams in European football. Six straight Bundesliga titles – with an average margin of 17 points ahead of the runners-up – and seven trips to (at least) the semi-finals in the past nine editions of the Champions League can only be described as pure, utter dominance.

Besides being one of the winningest franchises in modern football, Bayern are currently also one of the most experienced. After drawing to Augsburg (1-1) and losing at Hertha Berlin (2-0), newly-appointed Bayern manager Niko Kovač opted for his strongest possible starting eleven for this Champions League fixture against Ajax – with the possible exception of James Rodriguez; the Colombian playmaker did not start because he was not entirely match fit. 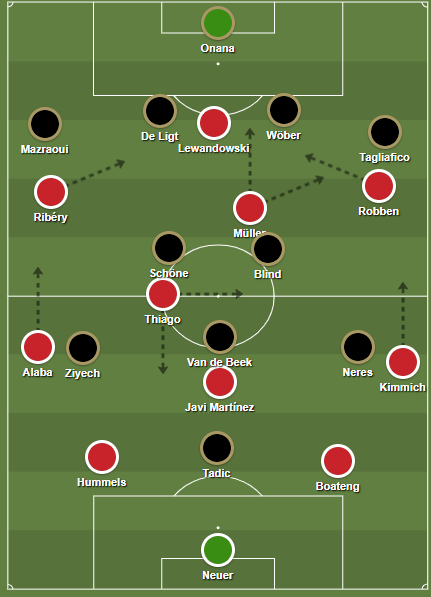 How experienced are Bayern exactly? Well, the starting eleven in this game boasted an average age of 29.8 years – with six of their starters being over the age of thirty – and an average time spent in the Bavarian first squad of almost seven seasons per player. Bayern München are the embodiment of strong continuity.

Ajax, on the other hand, can not be described as an experienced squad. Even with the additions of Daley Blind and Dušan Tadić in the past summer, Ajax are still a bunch of puppies in the context of a big Champions League fixture like this.

With the gap in individual quality and, especially, experience in mind, Ajax manager Erik ten Hag made a couple of defensive-minded adjustments to his usual lineup.

Up front, striker Klaas-Jan Huntelaar was dropped for central midfielder Donny van de Beek, which meant that Tadić moved up to the most attacking slot, where he would play as a ‘false nine’, dropping into midfield or out wide to stretch Bayern’s center of defense vertically or horizontally, trying to create mismatches and overloads for his attacking teammates.

With playmaking midfielder Frenkie de Jong out injured, Austrian center-back Maximillian Wöber was slotted in next to captain Matthijs de Ligt in defense. Daley Blind moved up in Ajax’ 4-2-3-1 formation, playing next to Lasse Schöne in the double pivot in midfield.

With Van de Beek at the ‘ten’, and Blind in midfield, Ten Hag solidified Ajax’ defensive capabilities as a whole, sacrificing a pure striker and a second deep-lying playmaker in midfield. 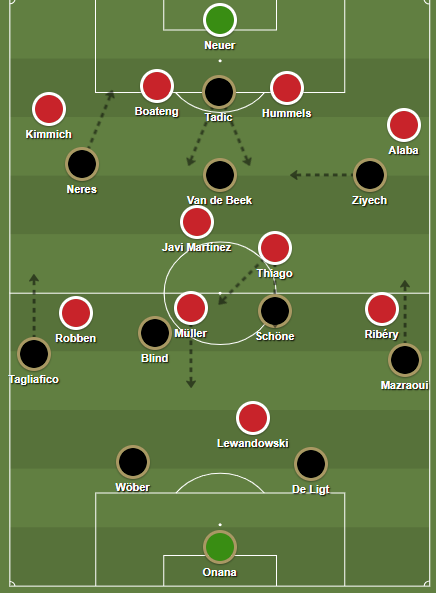 Ajax’ aggressive intentions initially backfire…
Ajax might be the most ill-suited out of the 32 teams in this edition of the Champions League to drop back deep onto their own half as an entire unit against tougher opposition. In contrast to their Dutch competitors PSV, who can take a more pragmatic and versatile approach to win games, Ajax’ entire squad is built to win games through long spells of possession and a high-positioned press.

So even with Ten Hag’s ‘conservative’ adjustments to the starting lineup, Ajax were never going to drop deep and absorb in this game.

In the first four minutes, Bayern seemed all set to steamroll the offensive-minded intentions of Ajax. In 120 seconds time, Bayern created three chances, all by quickly switching play from one flank to the other.

After Franck Ribéry hit the side-netting from close range in the opening minute, and Arjen Robben saw one of his trademark diagonal rifle-shots towards the top left corner parried out by keeper André Onana, the third time Bayern created danger proved to be the charm.

Center-back Mats Hummels stayed up front after a cleared corner. Joshua Kimmich quickly played a free-kick onto a wide open Robben on the right. Hummels headed home the Dutchman’s cross at the back post, after Schöne failed to provide back-up cover for his teammate De Ligt, who had to step out.

…but eventually cause Bayern all sorts of trouble

After a whirlwind start to the game, Bayern quickly found themselves struggling to build up from the back through Ajax’ high press.

Van de Beek took away Javi Martínez as an initial passing option for the center-backs with some very tight man-marking, while wingers Hakim Ziyech and David Neres were instructed to alternate between cutting off the supply line to full-backs Kimmich and David Alaba and helping striker Tadić hurry the build-up of Jerôme Boateng and Hummels.

Thiago Alcântara frequently dropped back to help, but central midfielders Schöne and Blind were very sharp and decisive in actively pressing forward whenever the Spanish playmaker tried to involve himself in the early passing game. 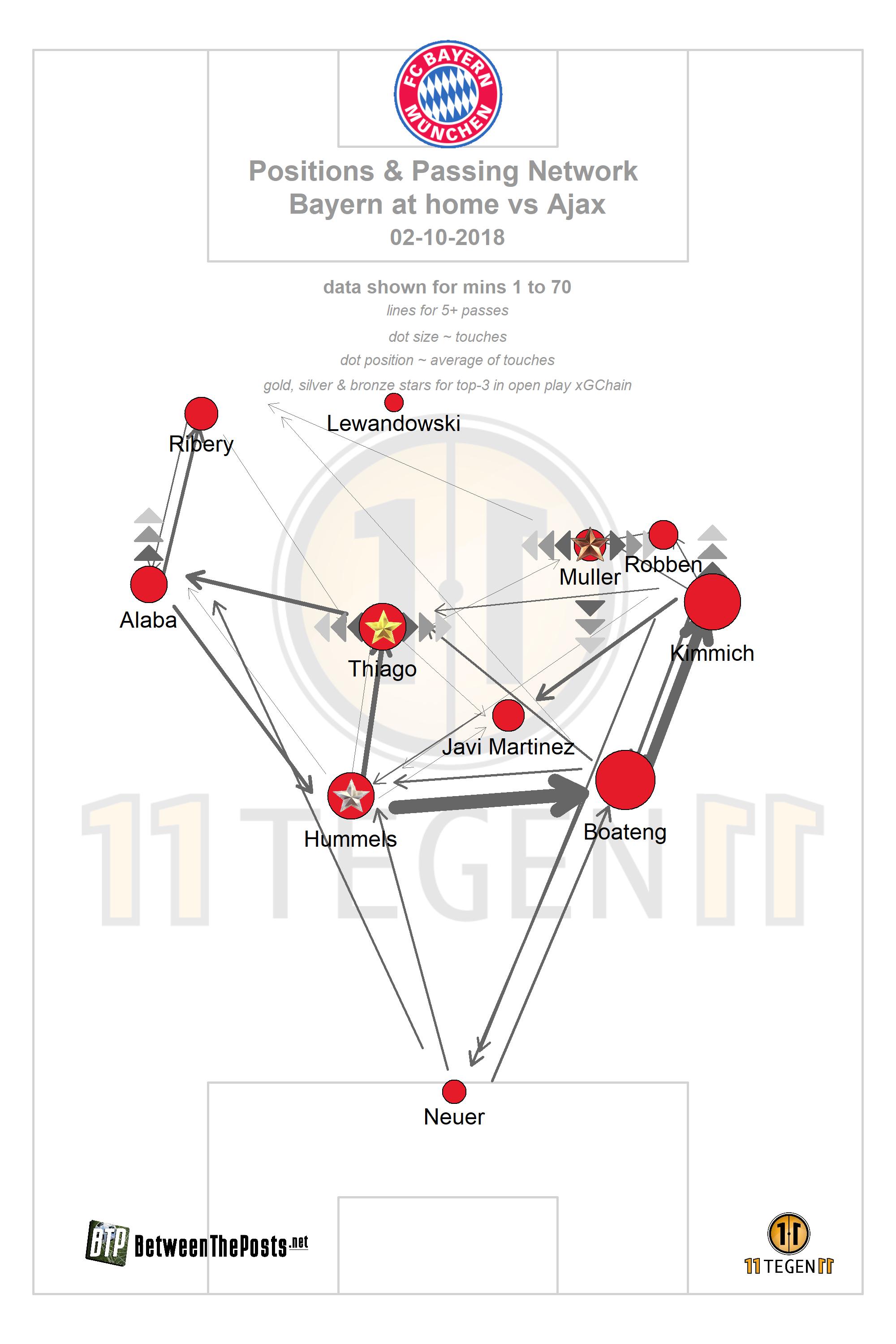 Van de Beek’s invisible work allows creative trio to shine
When Ajax regained possession of the ball – which happened a lot, because they were forcing Bayern turnovers left and right – their most technically gifted players made confident and aggressive decisions on the ball.

Neres did so on the left with a lot of dribbles, a lot of those asking real questions of Kimmich’s man-marking. Ziyech combined these types of moves on the right wing with some scintillating cross-field laser-passes and two very dangerous long shots. And ‘false nine’ Tadić was a real handful for Hummels and Boateng, by constantly switching up his patterns in combination play.

The individual brilliance of Neres, Ziyech and Tadić was able to shine through because of some excellent off-the-ball work from Van der Beek. The ever-industrious midfield dynamo proved crucial time and time again with his vertical runs into the box. Almost every Ajax attack that caused Bayern problems had some version of Van de Beek popping up in the penalty box preceding the eventual danger.

Ajax’ equalizer in the 22nd minute was made possible by Van de Beek sprinting wide, off-ball. After Ziyech majestically controlled a long ball, Van de Beek’s run in behind Alaba pulled Hummels out of his central zone, creating an open lane towards goal for right-back Noussair Mazraoui, who rounded off a nice one-two combination with Tadić with a deft finish.

Van de Beek’s runs were crucial to three of Ajax’ four big chances in the second half. Twice, his far-post run opened up space for a near-post shot on goal after a low cross from the left. Van de Beek himself got the biggest chance, but he was unable to crown another perfect box-run with a goal, sliding the ball to the left of Neuer’s goal, after a combination through the center between Tadić and Blind provided him the opportunity.

To Robbéry or not to Robbéry
Bayern were very dependent on wing-play to create chances in this game. Everyone who has seen Bayern play in the past seasons, recognizes the mechanisms. Kimmich and Alaba, the undisputed kings of attacking fullback duo’s, bomb high up the pitch, creating one-on-one dribbling or cutting opportunities for Robben and Ribéry in the halfspaces, or the possibility of a low cross from one of the fullbacks themselves into Robert Lewandowski and Thomas Müller.

This tactic did not work optimally today. Center-backs De Ligt and Wöber were continuously clearing crosses, while Ajax’ defensive support from midfield almost always came in time to double up on Robben or Ribéry’s dribbles.

Furthermore, starting Robben (34) and Ribéry (35) meant that Bayern’s press mostly came down to central midfielders Müller and Thiago constantly having to sprint out to hurry up the free center-back and the deepest midfielder, because the two wingers in their mid-thirties did not have the requisite gas tanks anymore to consistently help press as an entire attacking unit.

Bayern enjoyed their best spell after James replaced Robben in the 62nd minute. The Colombian playmaker provided extra creativity in the center of the pitch, freeing up Thiago to drop back more consistently and deeper than before. This meant that Van de Beek sometimes had to stop shadowing Martínez to provide extra cover to Thiago.

With Thiago and James taking over proceedings with their technical brilliance and creative decision-making, Ajax had to hold on for dear life in the final fifteen minutes. But the visitors from Amsterdam did manage to come closest to scoring a late winner.

Lasse Schöne’s beautifully struck free-kick would have probably ended up in goal with any human goalkeeper, but Manuel Neuer proved to still be, uh, Manuel Neuer. He made an absolute Glanzparade to keep the score at 1-1.

Takeaways
If one team were to win this game, it probably should have been Ajax. Which is, if you think of it, kind of crazy. They were playing Bayern, in Munich. That alone can already be seen as some mighty progress for (the top of) Dutch club football in an international context.

Bayern have looked a bit off in recent weeks, but the impactful substitute minutes of James show us that the German record-breakers have plenty of fancy options to switch it up, and find their ideal lineup. Whether that ideal eleven includes Robben and Ribéry, remains to be seen. 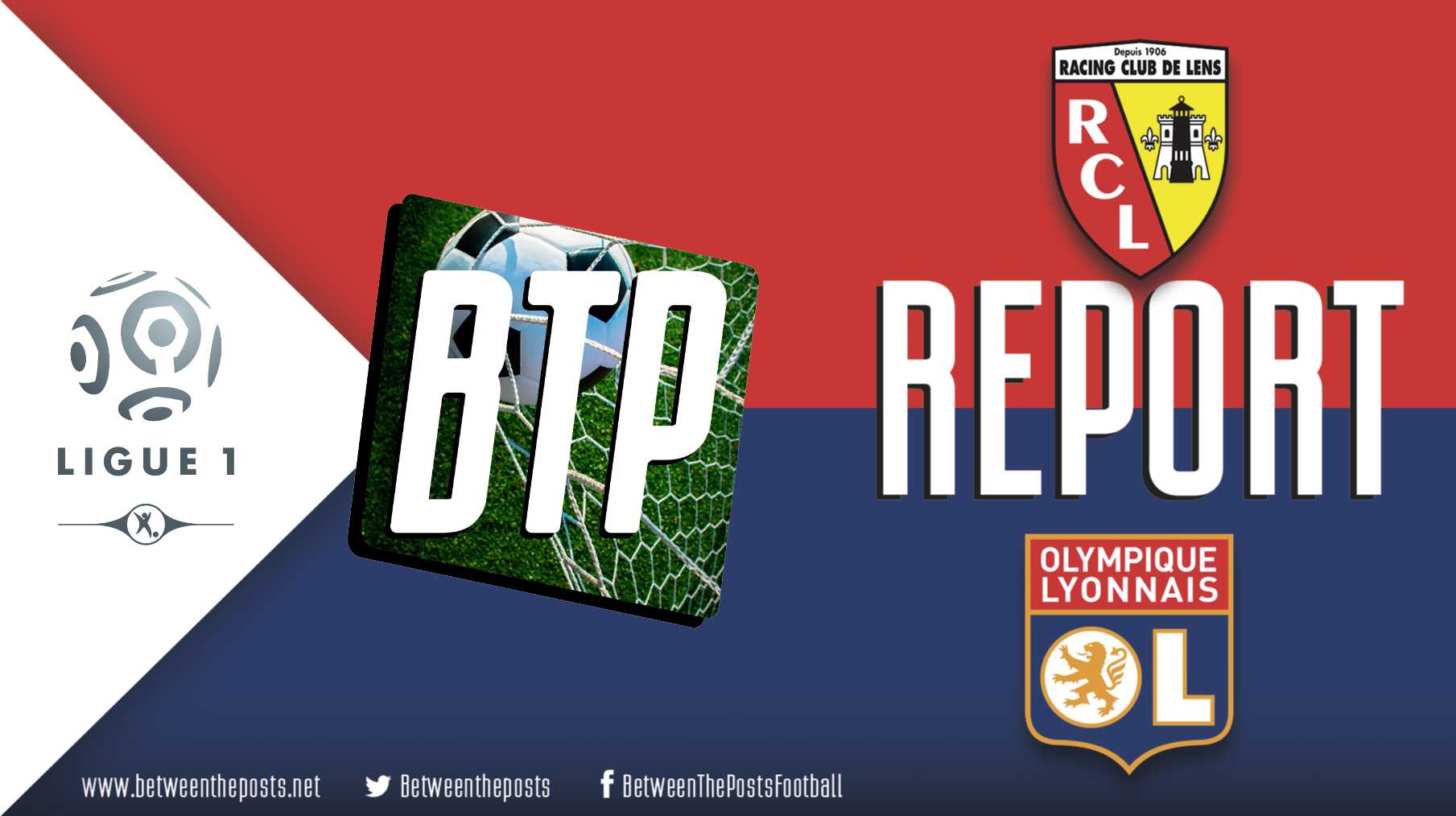 Between the Posts is adding two new leagues!