Different year, same Bayern Munich, but not in a positive way. Kovač’s men open the Bundesliga gates with a disappointing draw against Hertha BSC that recalled exactly the issues that undermined their previous season. Early days pose Bayern with the same questions over and over again, with Kovač so far failing to find the answers.

The end of an era for Bayern Munich has well and truly arrived., The club’s values slowly shift to adapt to the demands of the current transfer market. Over the years, Bayern have made a name for themselves with smart spending, and by harvesting the best crop of Bundesliga players to proclaim their dominance, not only on the field but over the entire German system. Both of these crucial elements have not played out that well over the past transfer windows and this is starting to influence the  dominant shape that the German champions can bolster.

In recent years, inflation and the outburst of the Premier League market has indirectly stunned Bayern’s control over the league’s talent pool. This has become evident in the struggles at retaining some of the most exciting talents, and the consequential effects of this phenomenon can be noticed through the lens of league and Champions League performances.

In the past years, the Bavarians have therefore been in search for stability to return to the top of the food chain amongst Europe’s elite.

The summer of 2019, in this sense, should have paved the way for a more resolute approach to transfer activities. Although the early premises seemed to suggest so, dealings slowly but surely turned sour at the heart of negotiations. Whilst Lucas Hernandez, Benjamin Pavard and Jann-Fiete Arp are quality additions for the present and foreseeable future, the revolution Hoeness had anticipated with the departures of veterans Arjen Robben and Frank Ribéry is far from being achieved. As such, for the second year in a row, Bayern find themselves at a crossroads, with Borussia Dortmund and the rapidly rising RB Leipzig prepared to dethrone the champions at any given opportunity.

For the opening game of the Bundesliga season, Bayern hosted Hertha BSC, a club known for frustrating Kovač’s side – a 0-0 draw and a 0-2 loss were Bayern’s results against them in the past season.

The only new signing to feature in Bayern’s eleven was Benjamin Pavard, with Lucas Hernández starting on the bench and Ivan Perišić not called up due to a suspension.

The scene is set

Bayern started in a 4-3-3 formation imprinted with Kovač’s wing-oriented style. Thiago, Bayern’s midfield organizer was marked by attacker Ondrej Duda throughout the match, so Bayern were forced to build through their center-backs, posing once again many questions so often swept under the rug.

Out of possession, Bayern’s medium block A medium block refers to a team that retreats in their own half out of possession, generally only disrupting their opponents some way into their own half. attempted to close access to the center in a 4-5-1 shape without Lewandowski applying consistent pressure on Hertha’s defenders. On the ball, the visitors resembled a 3-4-1-2 shape.

Hertha, as opposed to Bayern, pressed high in a 4-4-2 formation with one of the strikers pressing the central defenders while his partner upfront marked Thiago, as aforementioned. The fullbacks were supposed to play a fundamental role in stopping the hosts from developing their play out wide. Therefore, they immediately stepped onto Alaba and Kimmich as soon as a pass towards them was made.  While this pattern was quite effective in the deeper stages of Bayern’s buildup, once the visitors retreated a low block, A low block refers to a team that retreats deep in their own half out of possession, generally only disrupting their opponents around their own box. the fullbacks leaving their positions to press often exposed the backline to one of the wingers behind them – an aspect that went on to play quite a role later on.

Moreover, by keeping the wingers wide Bayern could stretch Hertha’s backline, opening space in the halfspaces If you divide the field in five vertical lanes, the halfspaces are the lanes that are not on the wing and not in the center. Because there is no touchline like on the wing, players have the freedom to go everywhere. But this zone often is not as well-defended as the very center. This makes it a very valuable offensive zone to play in and a lot of chances are created by passes or dribbles from the halfspace. for combinations. 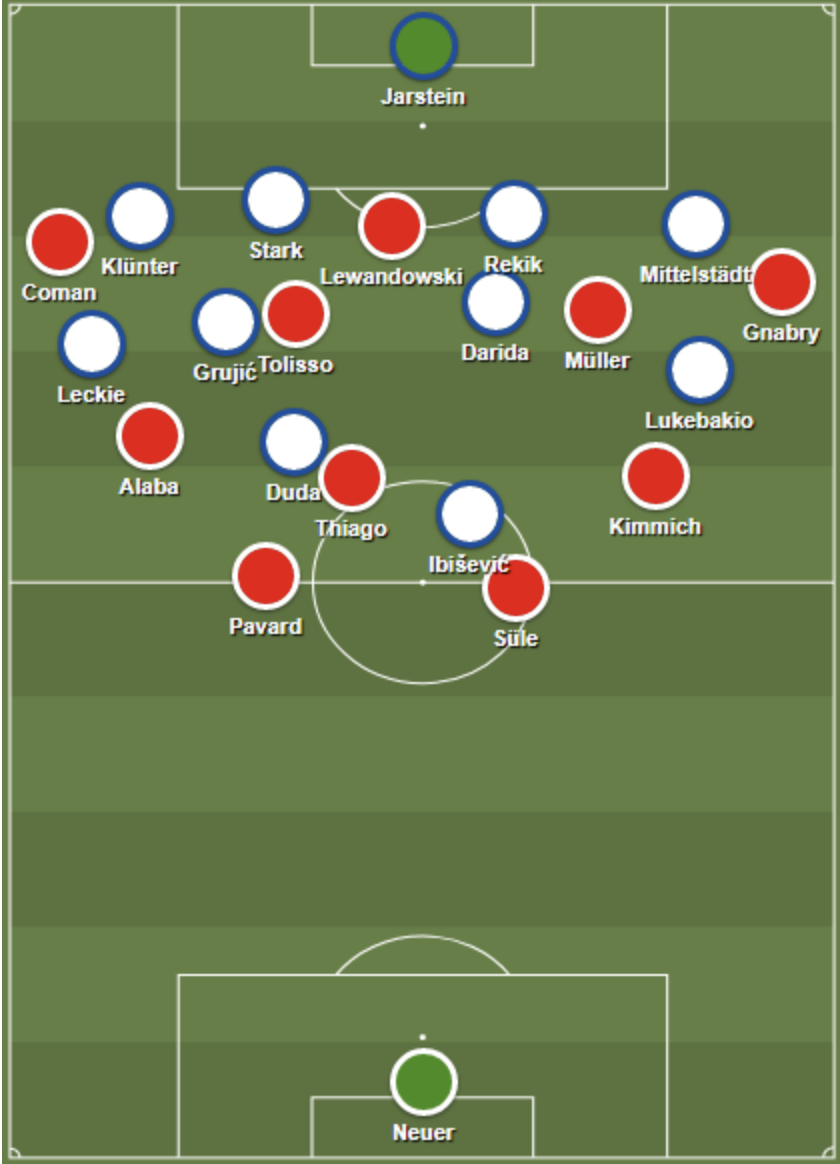 The few situations in which Kovač’s men were successfully able to bypass the pressure occurred when one of the wingers dropped in the halfspace to receive. Simultaneously, the central midfielder or fullback moved in the opposite direction, creating space in the process. Even so, however, Coman and Gnabry’s options were often limited, with the only pass available being a quick switch, A pass from one side to the other. unless they were able to turn away from their marker individually.

Bayern’s opener after a period of dominance was yet another example of what we have become accustomed to seeing under Kovač. It all started with a switch of play to reach the wide winger, Gnabry, who could then use his dribbling abilities to beat his man and cross the ball into Lewandowski’s path in the box. 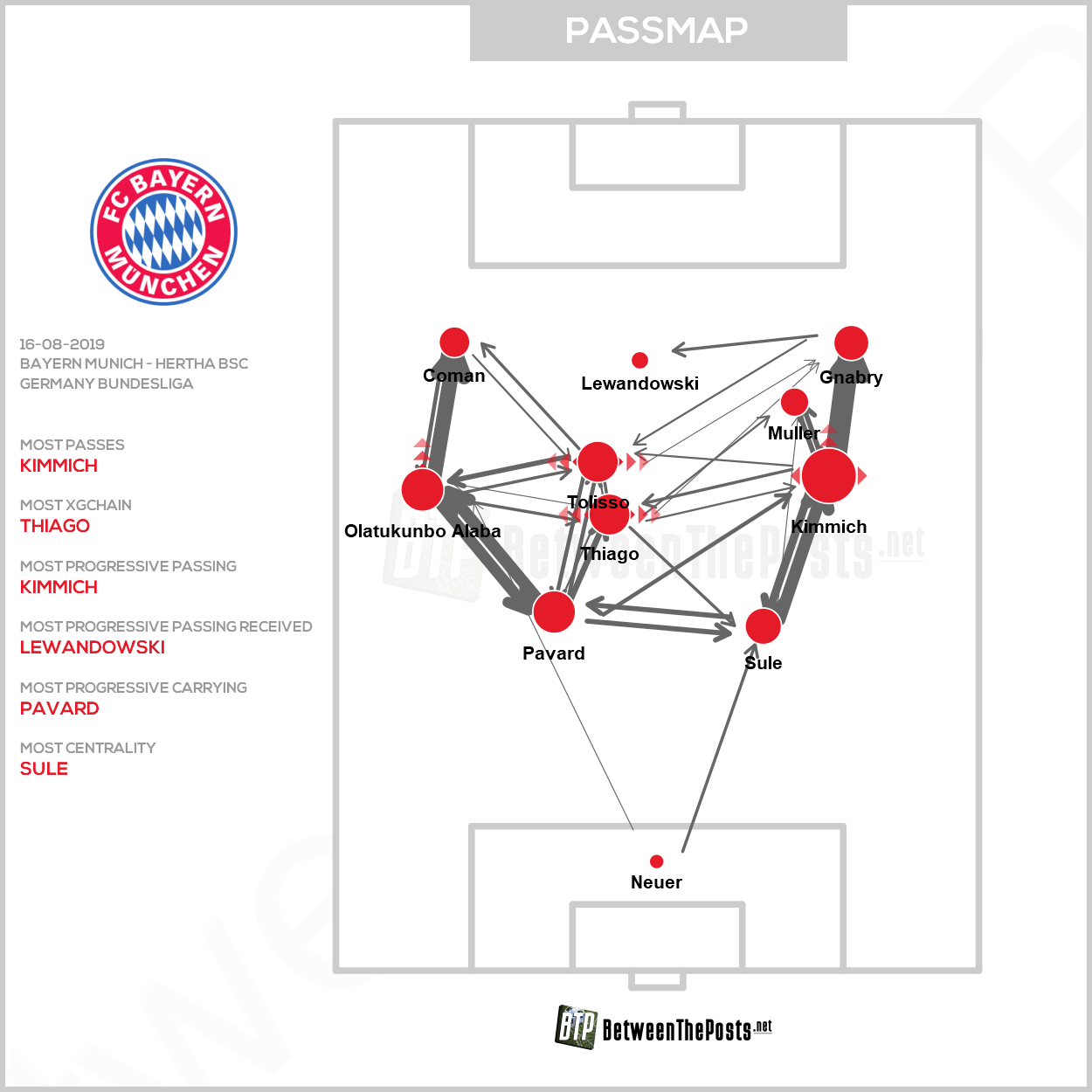 A very stale Bayern passmap, with their ball progression consisting almost exclusively of vertical passes along the flanks.

Around the fifteenth minute Hertha switched formation due to some defensive problematics they had been facing. In their 5-3-2 shape against the ball, they were not able to control wide areas as they would have hoped to. This way, Bayern could find quite some space by switching the play, even if not with the utmost speed.

Ante Čović therefore adjusted his team’s shape to a 4-4-2 out of possession and a 4-3-1-2 in possession in an attempt to correct the defensive issues.

As a consequence, Hertha gained control, and their center-backs started to find some passing lanes to the attackers for quick combinations with the midfielders to draw Bayern inside and free the fullback out wide. As a result, the hosts started pressing more intensely, with more consistent patterns being carried out when the defenders were on the ball. Lewandowski marked the closest center-back and Müller stepped out on the immediate option for the ball-carrier.

Ironically, minutes later came the equalizer from Hertha, and shortly after, the visitors took the lead. The buildup to both goals is interesting to point out because, albeit in different dynamics, the constant was the midfield’s lack of pressure on the ball. On the first goal, Dodi Lukebakio dribbled past Müller with alarming ease, while Thiago just watched as the winger prepared the shot. Whereas on Marko Grujić’s goal the goalkeeper just needed to play a long ball into the midfielder, who subsequently headed the ball into Duda, free behind Bayern’s midfield, which was slow to react to the lay-off and made the defensive line vulnerable to passes into depth.

Hertha could call themselves fortunate to have entered half-time in the lead, given the amount of pressure Bayern put their defense under. However, Bayern’s defensive transitions called the situation upon themselves, showcasing the same problematics from the previous season. The focus on attacks through the wings and poor positioning from the midfield when attacking left the center extremely exposed to Hertha’s counterattacks.

The second half was very much like a replay of the first, with Bayern conducting the play and attempting to break down Hertha’s defensive castle, while the visitors endured and waited for a chance to counter. Counterattacking chances slowly decreased though, and Hertha were continuously pushed deeper, making it harder for them to evade Bayern’s counterpressing After losing possession, a team immediately moves towards the ball as a unit to regain possession, or at least slow down the pace of the counterattack. once they regained possession.

Eventually, Lewandowski found the equalizer through a penalty and as the players became more aware of the defensive frailties their opponents offered, their wide combinations started becoming more effective. Through a series of rotations between fullback, ball-side midfielder and winger, Bayern could bait the opposition fullback into stepping out on one of the aforementioned players. Afterwards, one of the players involved in the combination would attack the free space behind the opposition fullback.

Gnabry, especially, started dropping as deep as near the halfway line to draw out his marker, after which one of Müller and Kimmich would attack the vacated space; similar dynamics occurred on the left side as well, involving Coman, Tolisso, and Alaba.

Despite getting into good positions frequently, Kovač’s men were still not able to create as many good shooting opportunities as their locations would suggest, either due to last-ditch defending from Hertha’s defenders or because of wastefulness and poor executions of the final pass. 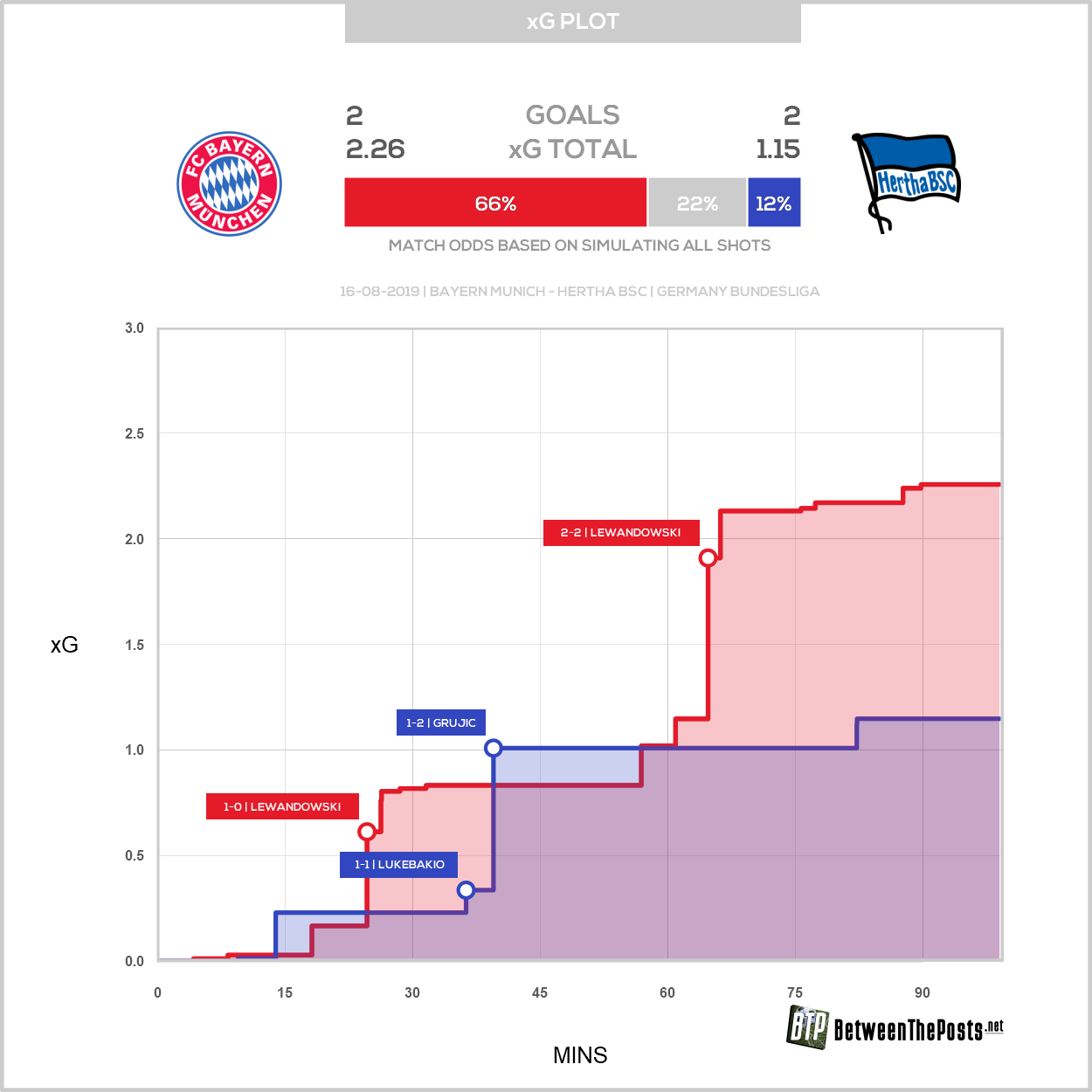 Different year, same Bayern and same Kovač. The Bundesliga champions started off the campaign with a home draw that might mean little in the context of the game and the performance but is of different significance in the grand scheme of things.

Bayern do not seem to have progressed as of yet compared to last season; and although they admittedly collected some of the best underlying numbers under multiple aspects during the previous campaign, systemic issues were present and still require addressal. Bayern look like the same individually brilliant and predictable side that can overplay, if not steamroll, most German teams, but will struggle when the bar is raised.

Every year since Ancelotti’s second season in Bavaria has initially looked like the year in which the champions are finally ousted from power, yet every year they prove that even when not at their best they can pull through. Well, this motif might finally be over, unless Bayern finally take matters in their own hands.

And albeit still being early days, signs are looking far from promising. 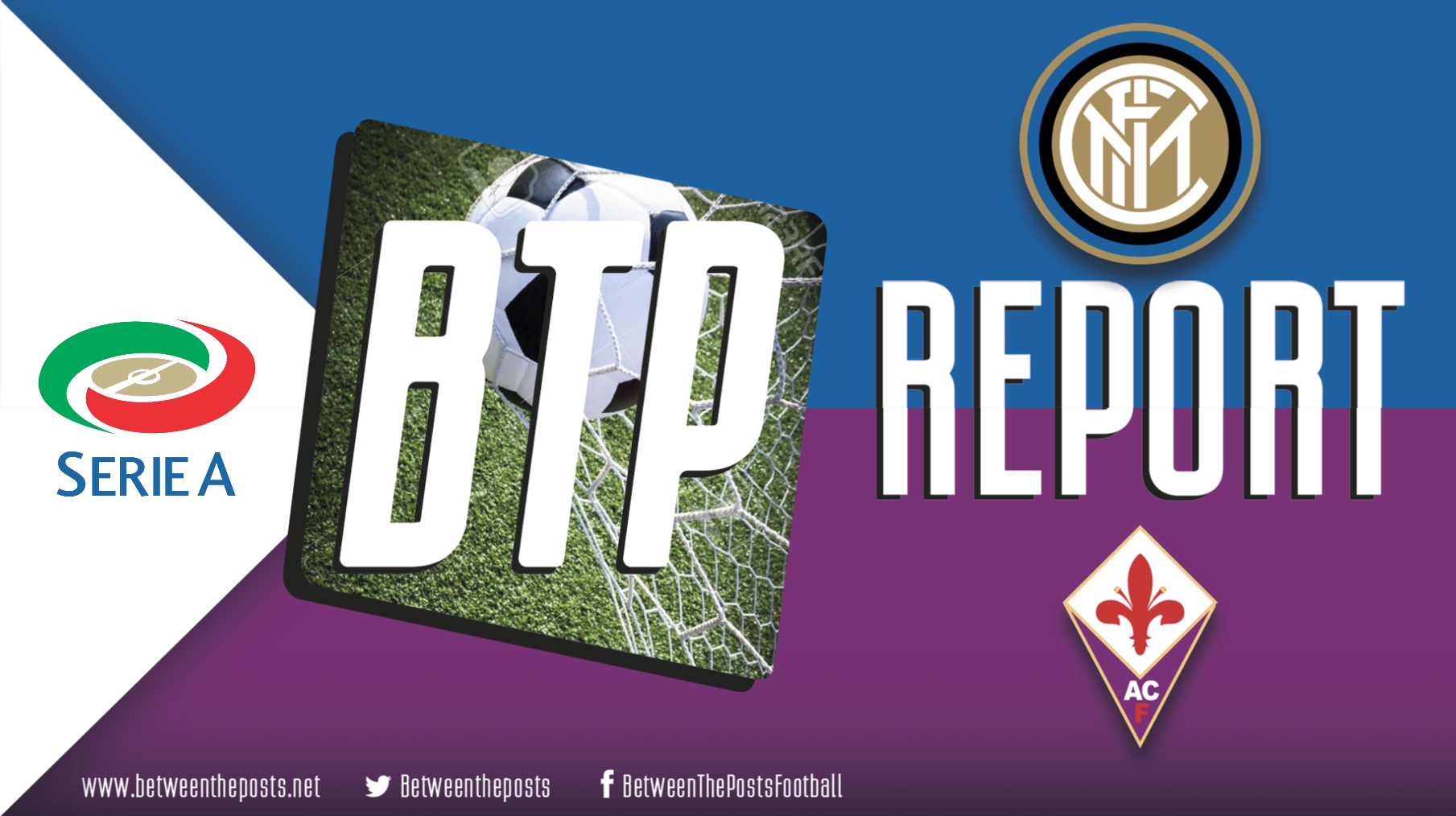 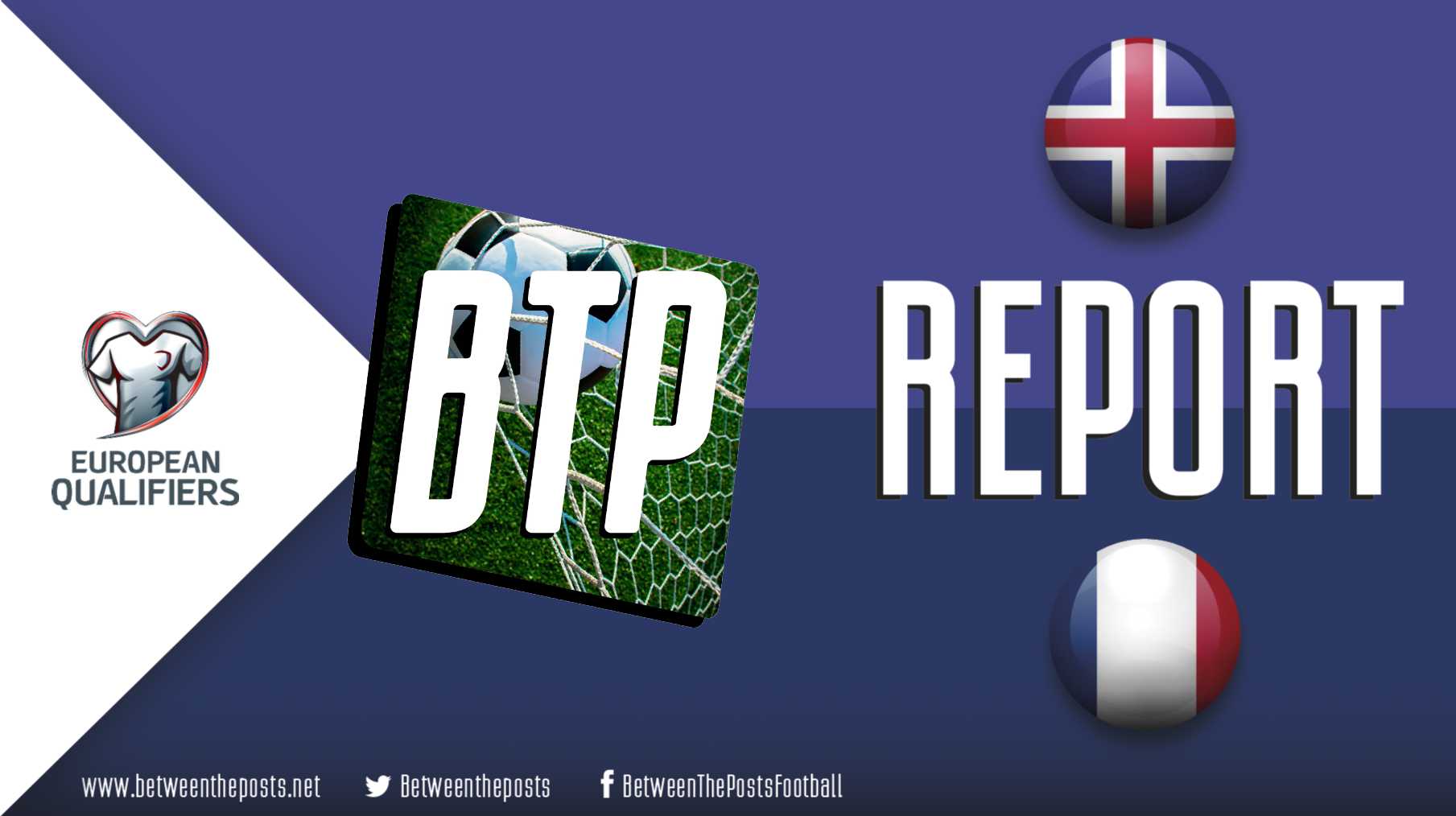