If not for an unfortunate own goal, RB Leipzig could perhaps have taken a point from their visit to the Allianz Arena. Domenico Tedesco’s side showed the kind of fight that they lacked before the new man took over, but compatriot Julian Nagelsmann’s use of Leroy Sané and emphasis on vertical play saw him emerge the victor over his old side.

For all of the winning that Hansi Flick did during his time at Bayern Munich, there is an argument to be made that the Bavarians are a better side under Julian Nagelsmann. While the new man will only be allowed to make such claims with success in the Champions League, it is also necessary to take care of business back home. Having gotten most of his side back after their bout with COVID-19, Nagelsmann had all the weapons he needed to welcome his former team to his new home. As was the case against Hertha Berlin, the team stuck to the 3-4-3 shape, with Dayot Upamecano once again being left on the bench.

Domenico Tedesco has done a good job stabilizing Leipzig since he took over, altering his side just enough to produce good results in the league. For all their exploits in recent years, this season’s version is far from being an automatic threat to the champions, though they do possess some dangerous players. As expected, Tedesco went with the 3-4-3 shape that he has used so often, with the only changes coming in the form of Dani Olmo, Lukas Klostermann and Nordi Mukiele who replaced Hugo Novoa, Mohamed Simakan and Benjamin Henrichs respectively.

Both sides establish their plans

The first half hour of this game saw both sides execute their plans, with the final fifteen minutes producing the kind of transition chaos that the Bundesliga is known for. But that initial half hour was riveting, providing a rich source of information into what these teams set out to accomplish.

While Bayern have made a habit of transitioning to a back three in possession, the loss of Alphonso Davies has seen Nagelsmann fully pivot to a 3-4-3 shape. This has seen Upamecano drop out of the side, with Serge Gnabry and Kingsley Coman providing pace on the wings.

Against the ball, Leipzig acted in a 5-2- shape, with the forwards staying narrow to cover the center and halfspaces. This left space on the sides, which was covered by the wingbacks stepping on the Bayern receivers. The double pivot of Konrad Laimer and Kevin Kampl also stayed compact, as Leipzig looked to solidify the middle of the pitch.

Given how the front three acted, it was clear that Tedesco wasn’t seeking to produce the kind of pressure that Leipzig are known for. Instead, the visitors only pressed situationally, either when they had a numbers advantage against the defense or when the spaces between the Bayern players became too large. These triggers allowed Leipzig’s front three to get involved directly, or put them in a position where they could be reached with just one pass. It was this kind of situational pressure that saw Christopher Nkunku steal the ball and commence the breakaway that led to the Leipzig equalizer, with André Silva tapping home the ball from a Dani Olmo pass.

Against this Leipzig defense, Bayern were typically flexible, acting with a three-man chain at the base. From buildup, it was usually a 3-2 base, though this could come about in two ways. Usually, Corentin Tolisso would drop in alongside Joshua Kimmich in the middle, with Thomas Müller dropping to receive on the right and one of Coman or Lucas Hernández playing through the left.

One way of effectuating the 3-2 buildup against Leipzig.

These scenes would see the wingbacks take up higher positions on the wing, while Leroy Sané positioned himself behind the double pivot. This positioning was deliberate – from here, Sané could pass back and allow Bayern to flood forward through the middle, or he could move to the side where Bayern had possession to support the ball carrier. This is also seen from the passmap, where he is prominent but doesn’t seem to play too many dangerous passes.

Sané took up an intriguing position yesterday: acted as a target for through balls from DEF/Kimmich behind the double pivot where he quickly passed back to allow for vertical play through the centre. He's prominent here but doesn't seem to pass into dangerous areas #Bayern pic.twitter.com/33UOBslbvV

Alternatively, Tolisso could move ahead to add to the number of attackers, in which case Sané used to drop quite deep in the halfspace to receive and dribble diagonally inward. This kind of movement – along with the actions performed by the other Bayern attackers – put quite a bit of pressure on Leipzig, which required quick intervention from the back five.

Bayern benefit from pressing and transitions

From this formation, it was going to be interesting to see how Bayern would impose pressure on Leipzig. It turned out that Bayern would press from a sort of 5-3-2 shape, where they mainly pressed with the quartet of Lewandowski, Sané, Tolisso and Müller. 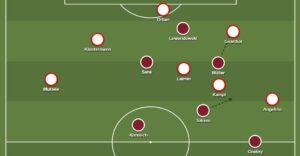 Bayern’s pressing scheme, out of the relatively unfamiliar 3-4-3 structure.

Depending on the location of the ball, the wingbacks could also come forward and box Leipzig in, but it was primarily the front four applying the pressure. In particular, Tolisso was effective in this phase, as his pressure saw the ball spring loose for a Lewandowski strike which was rebounded by an eager Müller.

With Leipzig having equalized following some pressure of their own, Bayern’s second goal came from a transition moment with Coman having beaten Mukiele with his run off the ball. A raking ball from Tolisso meant the Frenchman had an absurd amount of time and space to cross, with Lewandowski crashing the box for a powerful header.

Through the first half, Leipzig had struggled to retain possession, and their most promising moments usually came from their left. Kampl, Joško Gvardiol and Angeliño were active in trying to create some penetration down the left, but Nkunku was largely bottled up outside of the goal. Tedesco was going to need to find some way of getting his star attacker involved if he wanted to mount a comeback – easier said than done against the champions.

To begin the second half, Tedesco replaced Kampl with Dominik Szoboszlai. This saw Olmo drop into midfield alongside Laimer, and there was now a more concerted effort to play through their left. The few moments following the break looked promising as Leipzig piled on the pressure. But given Nagelsmann’s emphasis on short passing distances, Bayern were adept at finding the free man and quickly launching the ball forward. This meant that their threat never quite abated, which forced Leipzig to be careful when going forward.

An error in midfield from Kimmich saw Laimer break with the ball, and he found Nkunku for the goal after the attacker darted outside Pavard to go one on one against Neuer. Parity was suddenly restored, though Bayern continued to progress the ball at will. However, it was again their pressure that reaped dividends, as Gulácsi’s pass was intercepted by Coman whose diagonal ball found Gnabry in the halfspace. The shot looped into the net after a huge deflection off Gvardiol going down as an own goal on the defender’s part.

Having conceded again, Tedesco made two big changes, with Emil Forsberg an Amadou Haidara replacing Olmo and Laimer. The latter now partnered Szoboszlai in midfield, as the game moved into a phase full of transitions. With Bayern not known for conservative possession and Leipzig renowned for their counterattacking prowess, one should perhaps have seen this game state coming. As expected, Bayern carried the greater threat for the remainder of the proceedings, though neither side would add to their tally.

This was a far more even contest than would have expected, with Tedesco’s side doing enough to cause some problems for Nagelsmann & co. Regardless, the Bavarians prevailed in the shootout, with their ability to go direct playing a big part in their attacking threat. Leipzig did about as well as can be expected against a side of this caliber and did not let up, but ultimately came up short. Now, the focus turns to the Europa League, where Real Sociedad await in the knockout round. 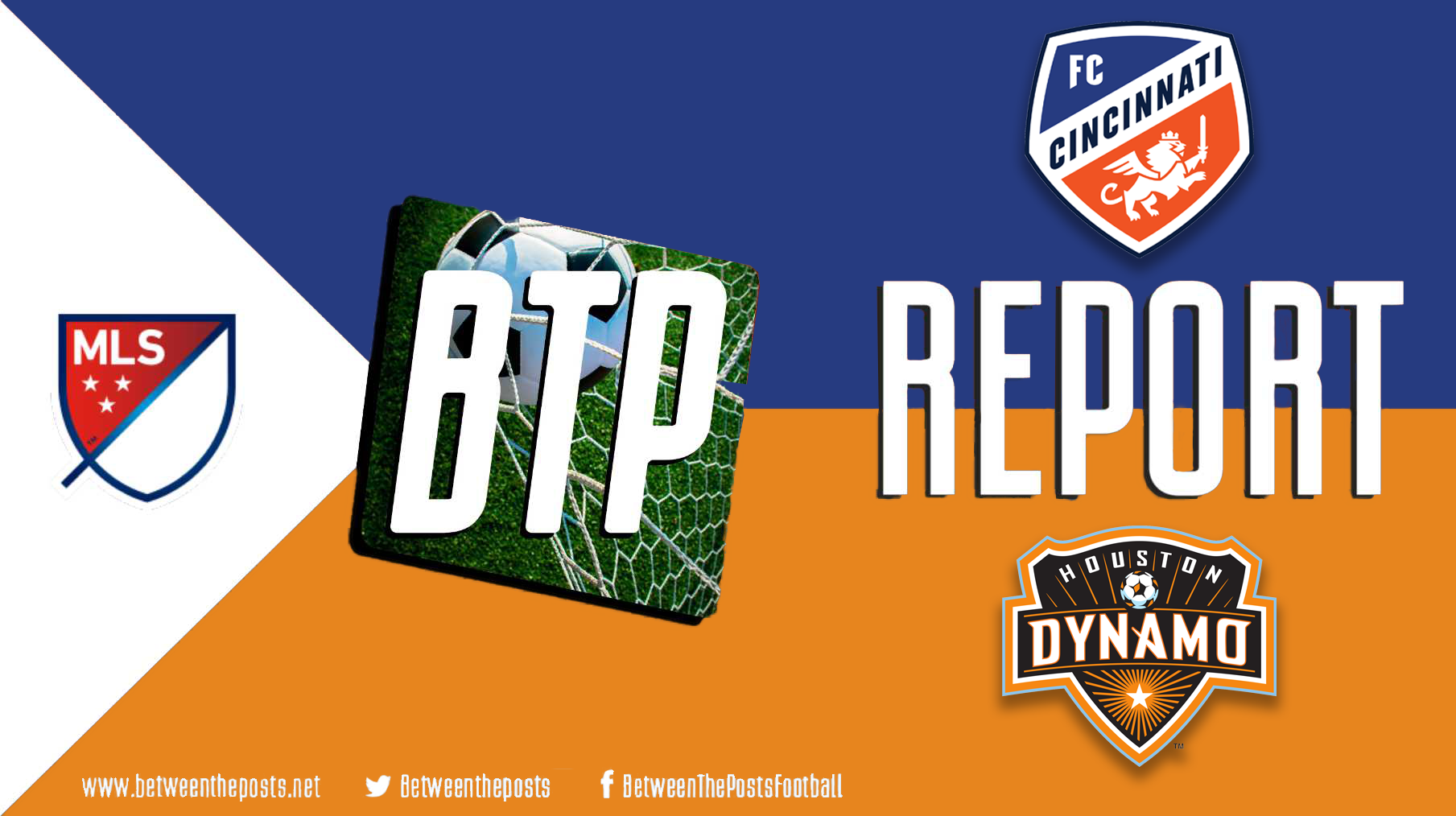