As the heavyweight fixture of the Bundesliga weekend, this table-topping clash between champions Bayern Munich and challengers RB Leipzig had a lot to live up to. Luckily, it did not disappoint, as shifting tactical structures and superb goals meant there was something for everyone in this electric matchup. But foremost, Leipzig made a statement as a title contender that has to be taken seriously, as Bayern needed a Thomas Müller header to bail them out after trailing for much of the second half.

One of the most awaited fixtures of the Bundesliga calendar, the clash between Bayern Munich and RB Leipzig presented a meeting between the top two sides in this most unusual of seasons. Though the table bears a familiar look with Bayern on top, they have looked wobbly at times, with injuries taking their toll on last season’s imperious winners. To that end, Leipzig posed their biggest test yet, as Julian Nagelsmann has made a living out of adapting to what he has at every step of his managerial career.

With their Champions League well underway, manager Hansi Flick was able to rotate and put out a strong side for this highly anticipated game. As expected, out went Alexander Nübel, as he was replaced by a returning Manuel Neuer. With Lucas Hernández injured, the defense was made up of David Alaba, Niklas Süle, Jérôme Boateng and Benjamin Pavard. Javi Martínez and Leon Goretzka sat as the double pivot, Two central midfielders next to each other. with Leroy Sané, Thomas Müller and Kingsley Coman supporting Robert Lewandowski in the usual 4-2-3-1 shape.

On his part, Julian Nagelsmann named an interesting side set out in a 4-3-3 structure. Péter Gulácsi was shielded by a defense that consisted of Angeliño, Dayot Upamecano, Ibrahima Konaté and Nordi Mukiele. Ahead of them sat Tyler Adams, who had Marcel Sabitzer and Amadou Haidara on either side. They supported the front three, which consisted of Christopher Nkunku, Emil Forsberg and Justin Kluivert.

Initially, the Leipzig structure was unclear, as the usual structure of a 4-3-3 was seemingly ignored. Sabitzer stayed too deep and central, whereas Haidara was wide and disconnected from Kluivert, who was the nominal right winger.

However, the plan became clear very quickly, as Leipzig pressed Bayern’s first line in a man-oriented fashion. This entailed Forsberg and Kluivert picking up the center-backs, whereas Nkunku and Haidara would then press the fullbacks. 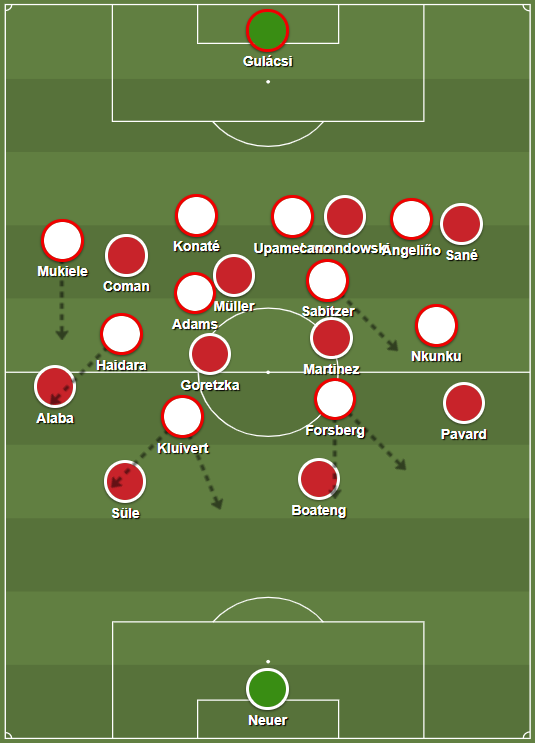 Leipzig’s man-oriented press. The press was initiated by Forsberg and Kluivert, whose positioning and awareness was key for Leipzig. Forsberg could often be seen pointing his teammates to the correct positions, which resulted in a swarming press from the away side.

Often, there were situations when Forsberg would mark one member of the double pivot, in which case Kluivert would mark the center-back with the winger on the side of the ball stepping up to mark the other defender. This happened when Bayern tried to play out through the right, with Forsberg tracking Goretzka and Nkunku stepping out on Pavard. Sabitzer was then alert in following Müller’s dropping movements, which further disrupted Bayern’s buildup.

If the ball was played through the left – which was often the case due to Alaba’s presence – Leipzig often got the better of Bayern in the initial stages. This was because of the center-backs splitting in the first phase, which meant Kluivert and Forsberg could mark the two center-backs and press them while they were isolated from the rest of the team. Haidara was quick to press Alaba whenever the latter got on the ball, and the strategy was to encourage passes down the flanks which saw Mukiele aggressively engage Coman in duels out wide. This plan was bolstered by the controlling presence of the Leipzig center-backs, both of whom held a high line to compress the space available.

Leipzig’s use of such strategies led to a fascinating opening, where Bayern’s system was put under immense pressure to reveal the cracks in their organisation.

For the home side, being placed under pressure is a recurring sight, however their issues in playing against an organised press were clear. Usually, one member of pivot drops between the center-backs to organise the play with the fullbacks then pushing high. The absence of this mechanism was conspicuous in this game, as Bayern instead held one of the fullbacks in deeper areas to receive and initiate attacks.

While holding one of the fullbacks in a conservative starting position is a reasonable strategy, Bayern’s problems stemmed from their pivot as both Martínez and Goretzka were non-entities in possession. This created a vacuum in the middle for the home side, as the lack of press resistance on the part of the pivot led to limited passes inside by the fullbacks. This helped the Leipzig press immensely, since the eights were able to step out on the fullbacks and halt their dribbles before they could develop. This was a glaring issue for the home side, which was solved in a rather unfortunate manner. 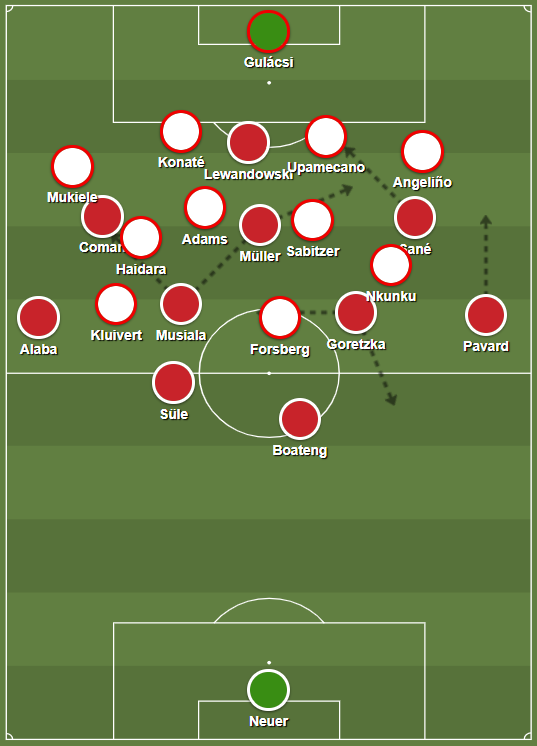 Bayern’s offense with Musiala in place of Martínez. The youngster’s press resistance allowed Alaba and Pavard to push higher than they had done before.

Midway through the first half, Martínez seemed to have pulled up with an injury, which led to the introduction of the electric Jamal Musiala. The youngster was dropped into the pivot, with Goretzka taking on his familiar screening role to ease the defensive duties of the youngster. The change proved fruitful for Bayern, as Musiala’s movement and press resistance allowed Bayern to construct more deliberate spells of possession. He also offered them a vertical, direct passer, which the team has lacked since they lost both Thiago and Joshua Kimmich.

Tactics aside, this was a game made for the neutral viewer, as the first half featured four goals of superb quality. The first came from Leipzig, who hit Bayern on the break in outstanding fashion. A layoff from Adams saw Mukiele take the ball forward, who then played it into the space in front of Forsberg. The midfield displayed incredible patience (‘pausa’, in Guardiola’s words) in waiting for Boateng to commit, and immediately playing Nkunku clean through the moment the central defender took the bait. Predictably, Neuer had rushed out to sweep the pass, but Nkunku demonstrated incredible skill in rounding the keeper and scoring into an empty net in one swift motion.

Not to be outdone, Bayern demonstrated their own quality, as Musiala had an instant impact after coming on. Receiving a pass from Coman just outside the box, the youngster gathered the ball and smashed the ball into the bottom right corner. Leipzig were quick to close him down and Gulácsi dived correctly – it was simply an unstoppable strike.

This was followed by an even better goal, as Bayern’s attackers demonstrated their perfect cohesion and understanding. Musiala played a short pass to Lewandowski between the lines, who then shifted the ball quickly to Coman. The winger in turn spotted Müller making a blindside If a defender looks one way, an attacker can try to make a run behind the defender’s back, on the side where he is not looking. This is called the blind side. run into the box, and disguised his pass perfectly to split the stationary Mukiele and Konaté and find the runner.

This was then followed by a Leipzig goal, as Bayern were caught ball watching as Haidara found Kluivert behind the defense after Mukiele had knocked down the switch from the left flank. The winger only needed one touch to control the ball before smashing it into the goal to make it 2-2 in a breathless first half.

Second half starts with a bang but fizzles out

As compared to the furious nature of the first half, the second period of the game was relatively tame. However, it started with a bang, as Leipzig took the lead just three minutes in. For much of the game, their offense had come from quick combinations during transitions, but the third goal was the result of the away side playing cleanly through the champions. A switch from Upamecano found Mukiele on the right, with the ball then working its way to the left. A smart backheel from Nkunku found Angeliño in space on the left, who crossed into the box. Inexplicably, Forsberg was able to reach the ball before Süle, who was caught ball watching just as he was in the buildup to Leipzig’s second goal.

As Bayern continued to put together intermittent passages of play, a breakthrough seemed unlikely given the nature of Leipzig’s block. The low block A low block refers to a team that retreats deep in their own half out of possession, generally only disrupting their opponents around their own box. deployed for much of the second half took away the space for Sané and Coman, and Lewandowski was marshalled well by Konaté throughout. However, they did break out of their limbo in the 75th minute, as Coman found Müller with a well-timed cross to the back post. The overload When one team has more players in a certain area or zone than the other team. on that side worked as intended, as the midfielder was able to force it in and pull Bayern level. However, Leipzig were in the ascendancy throughout this period, though they were unable to find another goal. 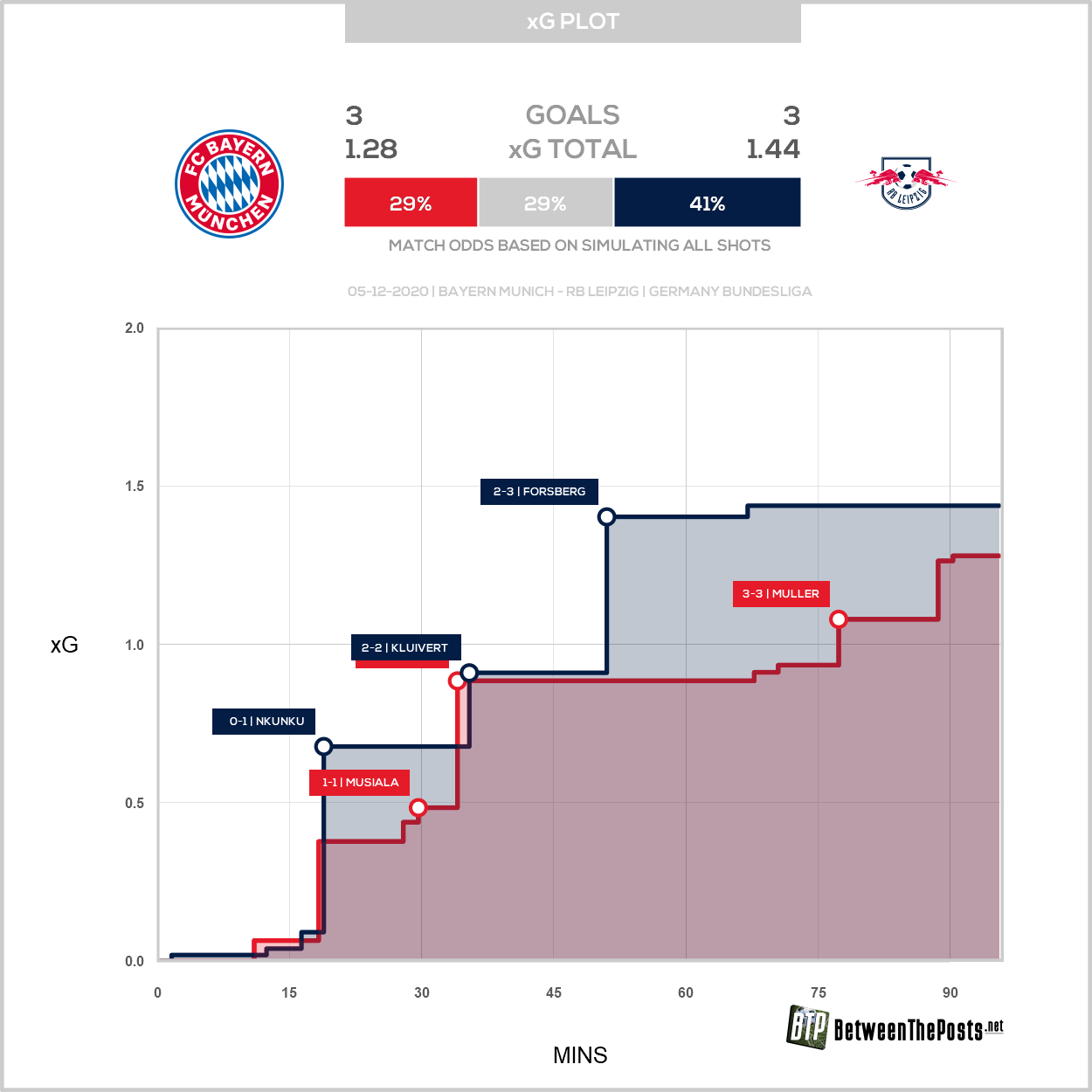 Nagelsmann’s reconstruction of the side post the departure of Timo Werner deserves to be lauded. They were able to push Bayern back for the majority of this game, while taking care to ensure that the home side’s individual quality did not overwhelm them as it had done to Borussia Dortmund. Though they couldn’t find the final goal, they have negotiated one of the biggest stumbling blocks in their title chase. Now, the focus turns to whether they can match the consistency that is required of any side with title aspirations.

Injuries have taken their toll on Hansi Flick’s side but they continue to pull together with their electric front three. For all of Leipzig’s domination, it was hard to shake off the feeling that they remain pretenders to the crown in the face of Bayern’s consistency. However, nothing can be taken for granted in a season disrupted by COVID-19 – Bayern will have to prove that they can withstand the numerous hurdles in their path. 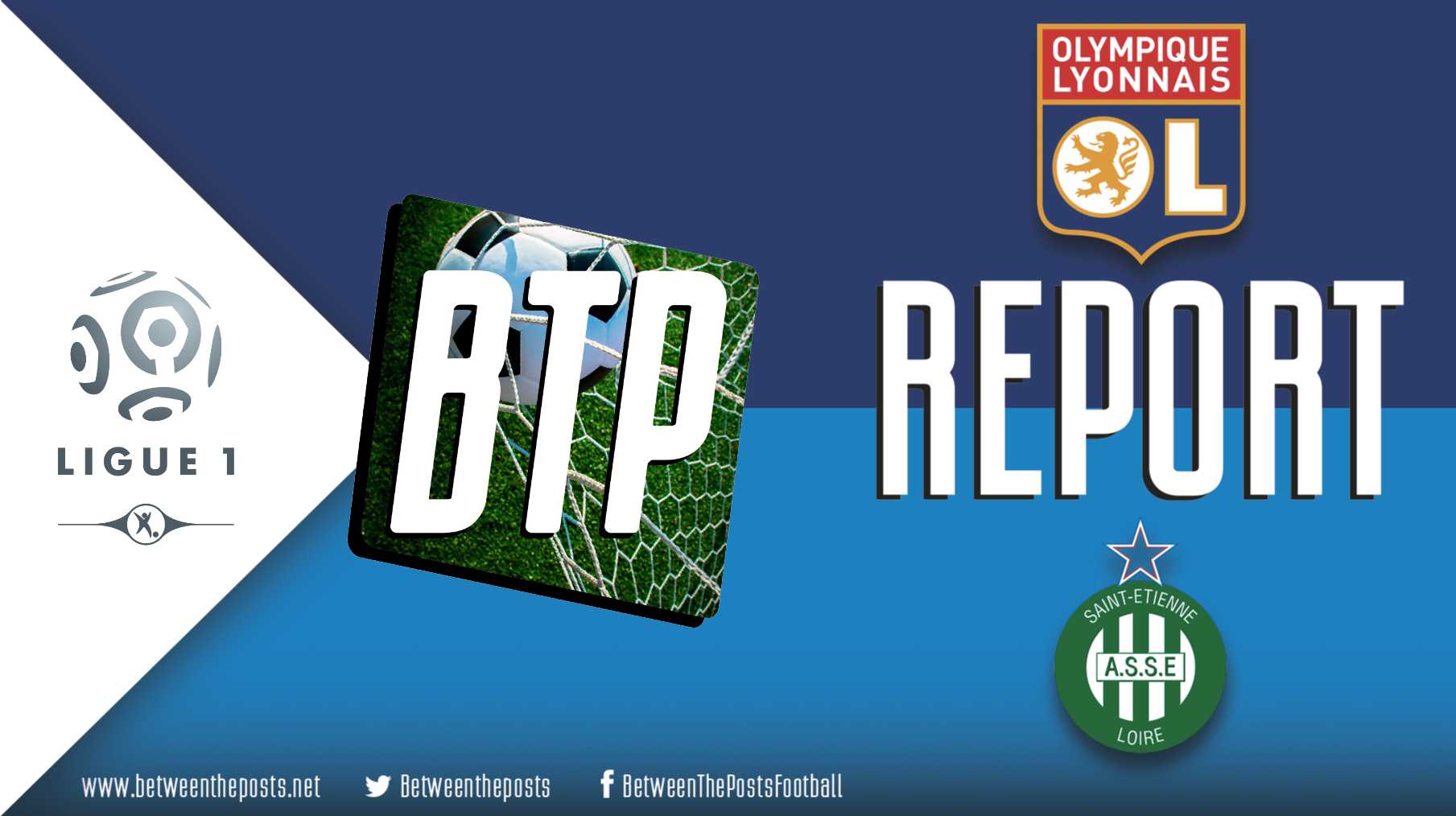 Olympique Lyonnais – AS Saint-Étienne: Kadewere Comes Off The Bench To Earn Brace (2-1)