With a mix of great structure, counterpressing and individual brilliance Bayern Munich had no trouble against a timid Bayer Leverkusen side (3-1).

After losing their first two matches Bayer 04 Leverkusen were desperate to finally get their first points against the defending champions Bayern Munich. Leverkusen were seen by many as one of Bayern’s main challengers, but so far have faltered out of the gates.

Leverkusen manager Heiko Herrlich is reportedly already on the hot seat, although the rumors of former RasenBallSport Leipzig manager Ralph Hasenhüttl have since been shot down by sporting director Rudi Völler. With injuries to Charles Aránguiz and Julian Baumgartlinger, Leverkusen were short on playmaking midfielders. Herrlich looked to avoid another heavy defeat, but the question was how to do that. Would he experiment with a flexible three man backline like he did in the opening match of last season, or come up with another tactical surprise? Would he press Bayern high or sit back in a low block?

Heavy rotation by Kovač
Niko Kovač’s appointment as Bayern manager was received with skepticism, but so far the Croatian has answered all his critics. The Bavarians crushed Eintracht Frankfurt in the Super Cup and lead the Bundesliga with six points from two matches. Kovač also had a few surprises and rotated his squad ahead of the Champions League match against Benfica on Wednesday. Rafinha replaced David Alaba, while Serge Gnabry and Corentin Tolisso got their first starts for Franck Ribéry and Javi Martínez respectively, with Leon Goretzka, the man of the match against Schalke, not even making the squad. 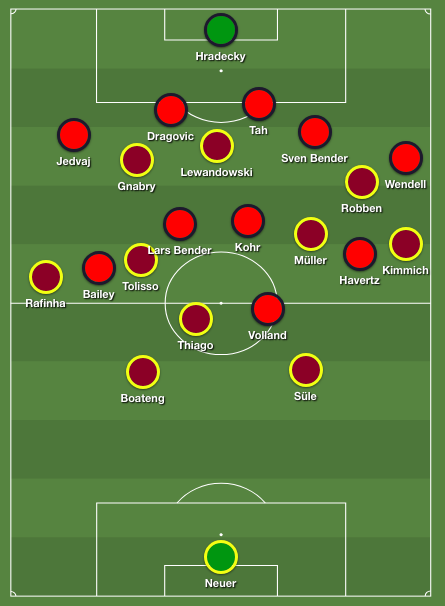 Bayern’s positioning when they had the ball

Bayern lined up in their usual 4-1-4-1, which in possession resembled more of a 2-5-3 with Jerome Boateng and Niklas Süle at center back. Thiago Alcântara acted as the deep-lying playmaker, occasionally drifting to the left and forming strong triangles with Rafinha and Gnabry.

Nominally a midfielder, Thomas Müller could push up alongside Robert Lewandowski as a second striker, or support the strong right side of Arjen Robben and the creative playmaking of Joshua Kimmich. Corentin Tolisso was tasked with being aggressive in the counterpress and providing runs into the openings between the Leverkusen center backs and fullbacks, mainly on the left side.

Bayern stifle fortunate Leverkusen through excellent counterpressing
Leverkusen scored the most goals from counter attacks in the Bundesliga last season, which indicates to what extent their match plans usually rely on athleticism and subsequent counter attacking. The trouble with this strategy was a lack of execution and ball progression from the back. Jonathan Tah, Aleksandar Dragovic and Sven Bender are all known for their physical strength and defensive qualities, but not particularly for their on-ball abilities.

The double pivot in midfield of Lars Bender and Dominik Kohr is also not known for ball retention and possession football, so getting the ball to their explosive forwards is a challenge for this Leverkusen team. Bayern’s pressing and counter-pressing, much more aggressive under Kovač, led to a lot of struggles in the build-up for Leverkusen. The away team always had a tough time, despite taking the lead from an early penalty after a Thiago handball.

The counter that led to this situation was textbook Leverkusen. Tin Jedvaj played a great cross court pass that sliced Bayern’s defense open. Kevin Volland’s cut inside against Süle attracted Thiago towards the ball and when the Spaniard went to ground early, the cross hit his arm. Volland would miss the spot kick and the rebound, but Wendell would convert the retake to give the away side the lead.

Leverkusen’s lead would last only four minutes, as Lewandowski’s excellent pressure on Wendell and a bounce off Tah to Tolisso saw the Frenchman equalize. In the eighteenth minute, Tah’s poor clearance gifted Robben a shot just inside the box. The Dutchman showed superb technique in taking the ball out of the air and depositing the ball in the top corner with the outside of the boot for the 2-1. After twenty minutes, Bayern were in complete control.

Herrlich’s original plan was a conservative 5-4-1 low block that saw only Kevin Volland up top, with occasional support from Leon Bailey. Teen prodigy Kai Havertz started in an unfamiliar wide left midfield position, but moved back into the double pivot after an injury to Lars Bender in the 27th minute. Julian Brandt took over on the left side and Leverkusen adjusted to a 5-2-3 shape, but despite some spells of possession were unable to create anything outside of a long range Bailey effort. 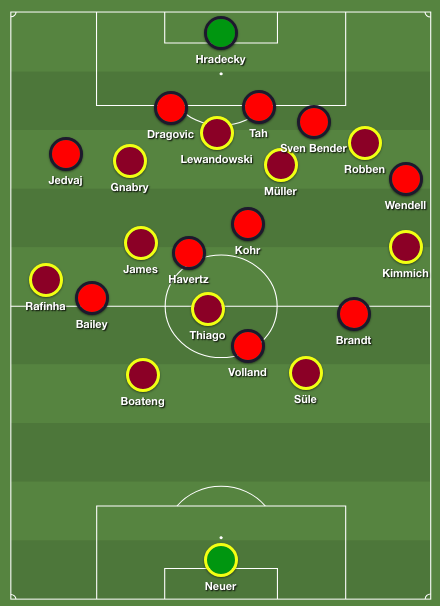 Kovač takes the air out of the match
Corentin Tolisso’s nasty looking injury saw James Rodríguez introduced, with the Colombian playing a little wider on the left side. Perhaps due to the upcoming jam-packed schedule – seven matches in nineteen days – Bayern took the tempo out of the game in the second half. At the hour mark Kovač decided to strengthen the midfield by bringing on Javi Martínez for Gnabry, sending James further out wide.

The home side enjoyed complete control in the first part of the second half with possession dominance and a seven to zero shots advantage. It would take until the 79th minute for Leverkusen to get their first shot of the second half, which would be their third and final effort of the match. Besides the second minute penalty, all of Bayer’s offense was summed up by two long range efforts from Bailey and Havertz.

To his credit, Leverkusen coach Herrlich did try to make adjustments to get back into the game. One of those came around the 60th minute, when wingers Bailey and Brandt switched flanks. Later, Brazilian teenager Paulinho and experienced Karim Bellarabi replaced the tired Bailey and Kevin Volland. This meant Julian Brandt filled in as the lone striker, which further reduced Bayer’s capacities to transport the ball forward.

Interestingly, Lucas Alario, perhaps the most natural center forward in Leverkusen’s squad, would remain on the bench. Unfortunately, Bellarabi’s main contribution was a horrendous challenge on Rafinha’s ankle ligaments for which he rightfully was sent off in the 80th minute. David Alaba came on to replace the Brazilian, who looks to be out for a while.

The match lost a lot of its pace, with the hosts seemingly cruising along with minimal effort, while Leverkusen were out of options. Bayern goalkeeper Manuel Neuer had just two touches of the ball in the second half, which speaks volumes about the inefficiency of the opposition’s attack. Finally, James’ goal killed off what faint hopes Leverkusen had.

Takeaways
Although it’s still very early in the season, Kovač is currently underway to silence his critics. Bayern are able to dominate opponents thanks to the excellent playmaking of Thiago as a deep-lying midfielder and a more aggressive pressing game with increased focus on offensive transitions. Losing Tolisso and Rafinha has the potential to hurt Bayern, with the lack of fullbacks a particular issue that might come up later in the season. Leverkusen are still pointless after three games – for the first time in their Bundesliga history – and look directionless. 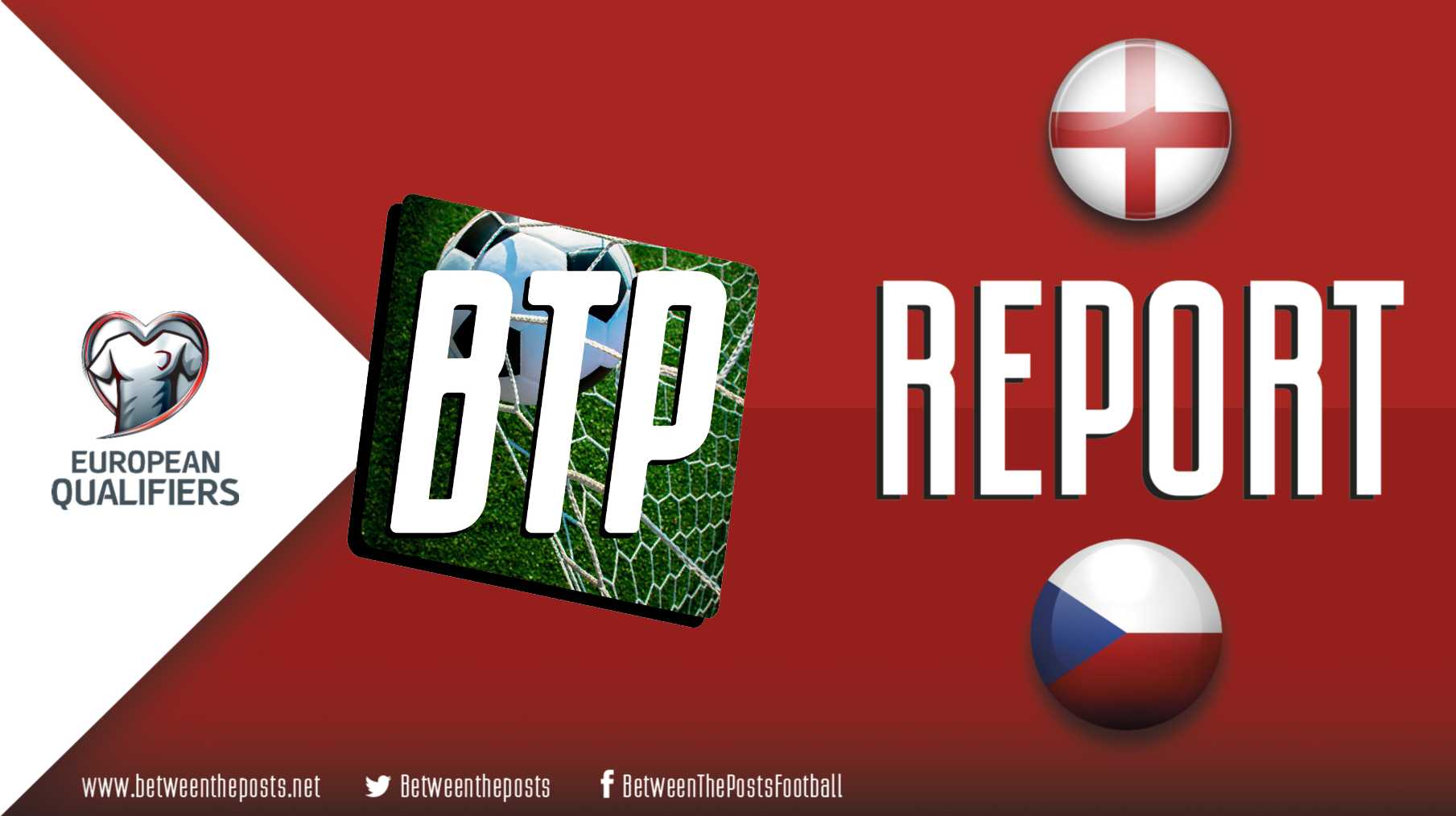