Belgium – Russia: Belgium Prevail Over Early Pressure And Get Off To Winning Start (3-1)

Group I’s first set of matches pitted two of last year’s big-story-nations – Belgium and Russia – against each other. In an affair that saw Belgium rule over Russia with their individual quality, Roberto Martínez’s tactical tweaks partly helped his side escape a troubling start.

As both teams regrouped for the first time since mid-November, there were plenty of changes in both lineups. For Belgium in particular, due to a growing list of injuries. Romelu Lukaku, Kevin De Bruyne and Axel Witsel – to name a few – were all sidelined, leaving Eden Hazard to carry the load as Belgium hoped to bounce back from their unexpected 5-2 defeat to Switzerland last time out.

Also looking to bounce back from defeat were Russia, where only four of the players who started in a 2-0 loss in Sweden also named in the eleven for this encounter. There was even a change of system, as Stanislav Cherchesov now had his team set up in a 3-4-3, which was most likely a way of combating Belgium’s shape. 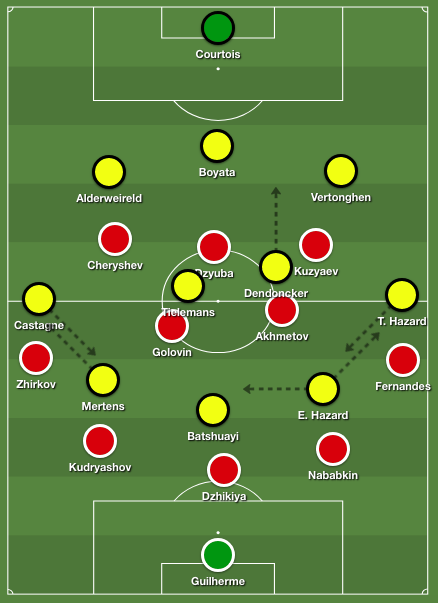 All twenty-two outfield depicted in their general position when Belgium had the ball.

Russia were keen not to be the antagonists at the beginning of this game. They were fully prepared to go after Belgium, as was reflected by their mirroring shape, which enabled them to press man-for-man and genuinely test the quality of Roberto Martínez’s side without De Bruyne and Witsel in midfield.

Russia’s double pivot 4-2-3-1 is one of the most frequently occurring formations in football. The two most defensive midfielders are called a ‘double pivot’. Aleksandr Golovin and Ilzat Akhmetov had the huge task of being incredibly aggressive against their direct opponents, whilst also being very mindful of the huge space they were leaving behind them in the process.

Fortunately for Russia, most of Belgium’s early buildup play happened down the right side, away from Eden Hazard. Often, Golovin was tasked with being aggressive against the nearby central midfielder. He would begin some yards away from Youri Tielemans, in order to keep an eye on potential Belgium openings on his blind side. Then, when the coast was clear – as it often was since Dries Mertens preferred to dart further ahead instead of posing a dilemma for Golovin by dropping deep – the midfielder would rush at pace to close Tielemans down.

In the opening stages, Belgium had no way of connecting play ahead. With the Russian wide forwards committed to pressing the Belgian center-backs and the defense committed to pushing right up against the attackers down the opposite end, there was no quarter given. It made progression incredibly difficult for Belgium and, subsequently, many of their attempts to feed their attackers failed.

Despite good pressure to the ball, Russia only manufactured one chance, which came inside the opening minute as a simple interception led to a headed half-chance for the gigantic target man Artem Dzyuba. The effort went well wide. 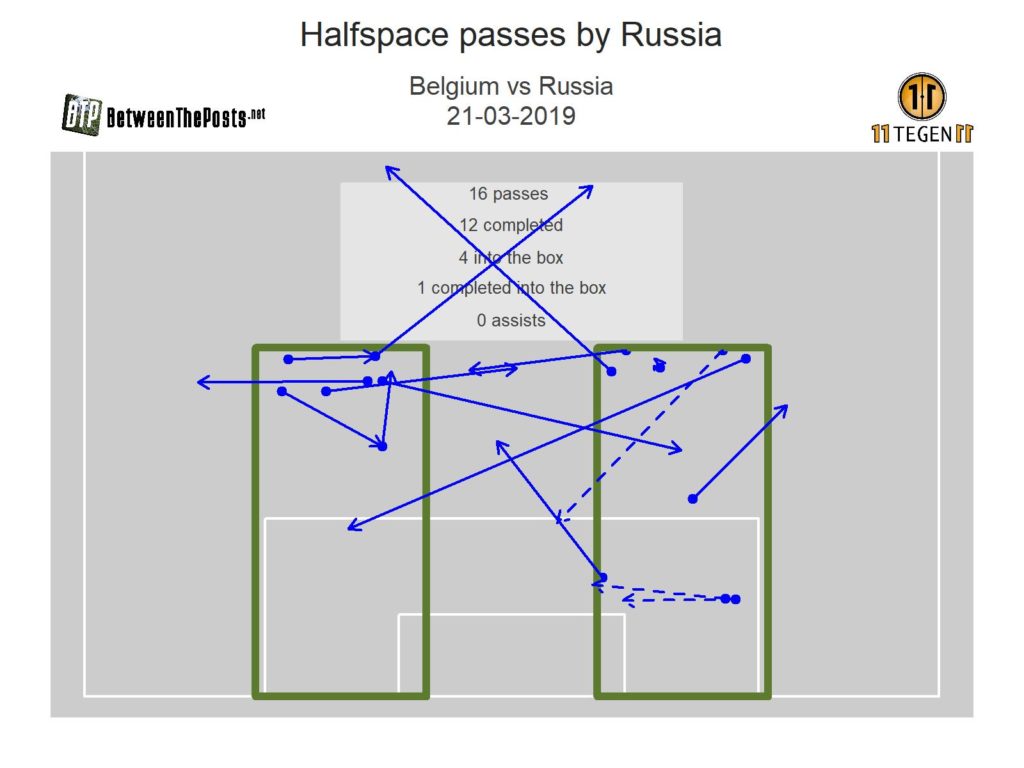 Belgium deployed the same 5-2-3 defensive structure as Russia, but were a little looser in their first two lines of defense. The double pivot was more disciplined positionally, whereas the front three still wanted to get at the center-backs, meaning the midfielders were open to exploit the space inside. Golovin, the more advanced of the two often found himself in acres of space to receive.

Undeterred by the midfield advantage Russia held, Belgium’s attackers continued to harry down the ball and it was to their success in the second minute that Dries Mertens managed to force a surprise mistake. Eden Hazard picked up the loose ball and slide through Michy Batshuayi, but the striker’s touch took him a little too close to Russia’s Brazil-born goalkeeper Guilherme, who could made the save.

So, the slight tactical advantage worked in Russia’s favor in the opening phase, however, the individual disadvantage was of no help to them in the attacking phases. In this department, Belgium were stricter in their man-marking, meaning Russia had no access to the center and Golovin often looked to ping diagonal balls out to the wing-backs. Unfortunately, the already fairly tightly marked wing-backs barely had a chance to control the ball, before they were being dispossessed, and any inroads they did make were ended by poor executions of passes and deliveries.

On the counterattack, Russia were arguably worse. Dzyuba is a tall forward perfectly suited for route one football, but less so for a direct transition-based style of play. Belgium’s counterpress After losing possession, a team immediately moves towards the ball as a unit to regain possession, or at least slow down the pace of the counterattack. was impeccably strong, so any glimmers of attacking transition were quickly shut out by the countless Belgian players in yellow rushing to reclaim possession.

Belgium pose solutions to their buildup issues and make them count

One of the most prominent forms of progression for the home side were to play direct passes into the feet of Batshuayi, who could then lay the ball off into either of Mertens or Eden Hazard. This was a particularly consistent combination between Eden Hazard and Batshuayi, and most notably for the opening goal. 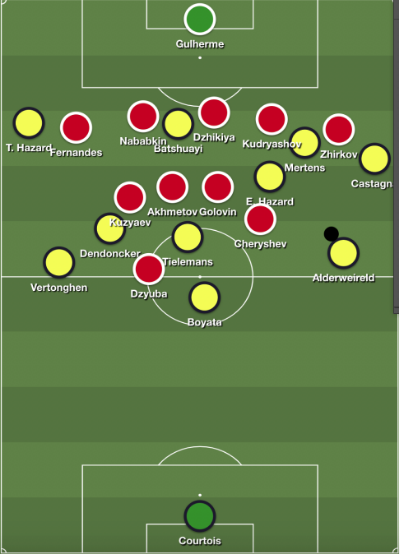 With Tielemans having cleverly played it out of a tight space, Thorgan Hazard immediately looked to feed it into Batshuayi, who completed a neat, one-touch lay-off into Eden’s feet. Here is where the vulnerabilities of Russia’s highly-position 2-3 pressing shape suffered. Not only did they suffer in transition positionally, but also in terms of energy, it seemed. They were simply a yard off the pace of Belgium, and that problem grew bigger and bigger as the game progressed.

Eden Hazard was then quick to locate the overloading When one team has more players in a certain area or zone than the other team. wing-back on the far side, Timothy Castagne, who laid it off for the man who started the move, Tielemans, and was now completely free of any midfield pressure outside of the penalty area. He set it with his left and drilled it with his right to find the bottom corner.

Russia were quickly back on the attacking scene, though, as Thibaut Courtois’ hesitation on the ball led to a calamitous mistake, gifting Denis Cheryshev an open net to fire into. Two minutes after going behind, the visitors had equalized.

Nonetheless, Belgium continued to tweak their game to resolve their current buildup issues. The most significant method was to have the far-sided wide forward move across to the ball-side, meaning the other would go unmarked. Now getting Eden Hazard into the game in a much more consistent fashion, he was able to forge a real partnership with Batshuayi. Subsequently, Belgium found more ways to break the press and were soon beginning to force the double pivot to retreat, therefore opening up gaps in he space just in front of them, effectively pinning Russia back and totally controlling the game.

Following Fedor Kudryashov’s press all the way up the pitch, the hosts managed to net another goal just before half time. Now with a hole in Russia’s press, Dendoncker freely received the ball and drove forward. On from that, the fluid attacking line – who spent the game rotating in and out of each other’s positions – saw Thorgan Hazard exploit the space behind the stretched midfield and turn cutely to evade oncoming pressure. Hazard passed the ball to his older brother who took the ball, drove into the box, jinxed inside and drew the foul to win a penalty. The Belgian talisman stepped up and converted calmly, as he always does. Advantage restored, Courtois relieved. 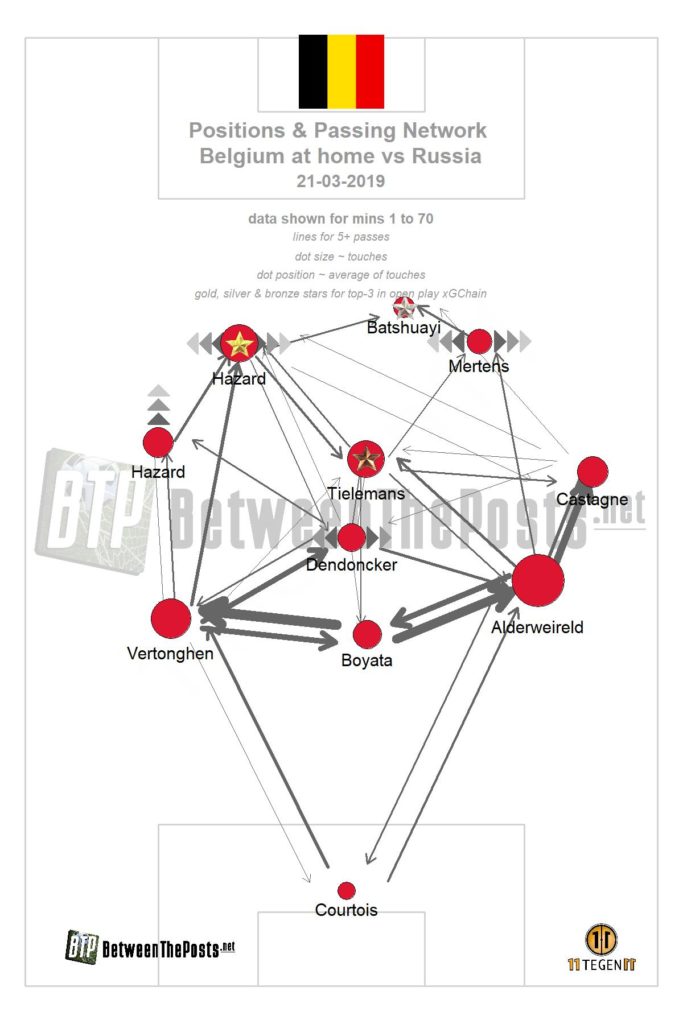 Fatigue allows Belgium to settle in for a comfortable second half

The longer the game went on, the more powerless Russia seemed. The worst part was that now Tielemans had all sorts of space to receive centrally. Additionally, the narrower and flatter structure of the three forwards – who were still positioned way ahead – allowed Belgium to advance through the wide center-backs much more often, particularly given a lack of protection against higher halfspace If you divide the field in five vertical lanes, the halfspaces are the lanes that are not on the wing and not in the center. Because there is no touchline like on the wing, players have freedom to go everywhere. But this zone often is not as well-defended as the very center. This makes it a very valuable offensive zone to play in and a lot of chances are created by passes or dribbles from the halfspace. entries.

Even the late change to a 3-5-2 formation from Cherchesov, which morphed into a 3-1-5-1 defensively did not resolve the issue. It is worth saying, however, that nothing eventful took place until just before the final ten minutes.

First came Batshuayi’s effort off the post after Tielemans clipped forward a knock-down that instantly exposed Russia against Eden Hazard’s driving run in transition. He laid it off for his younger brother, who played it low and central into the box for the center-forward but Batshuayi, for the third time, wasted a good opportunity.

Then there was the clincher, which was sloppy in every respect. Nobody came close to closing down Tielemans’ dribble and nobody came close to blocking Mertens’ simple channel run. What resulted from it was a chipped cross that luckily bounced off both of Batshuayi’s legs to fall kindly for Eden Hazard, who made no mistake claiming his brace.

Matters were made worse when Golovin received a red card for lashing a leg out at Mertens, meaning they will be without their young star in Kazakhstan on Sunday. 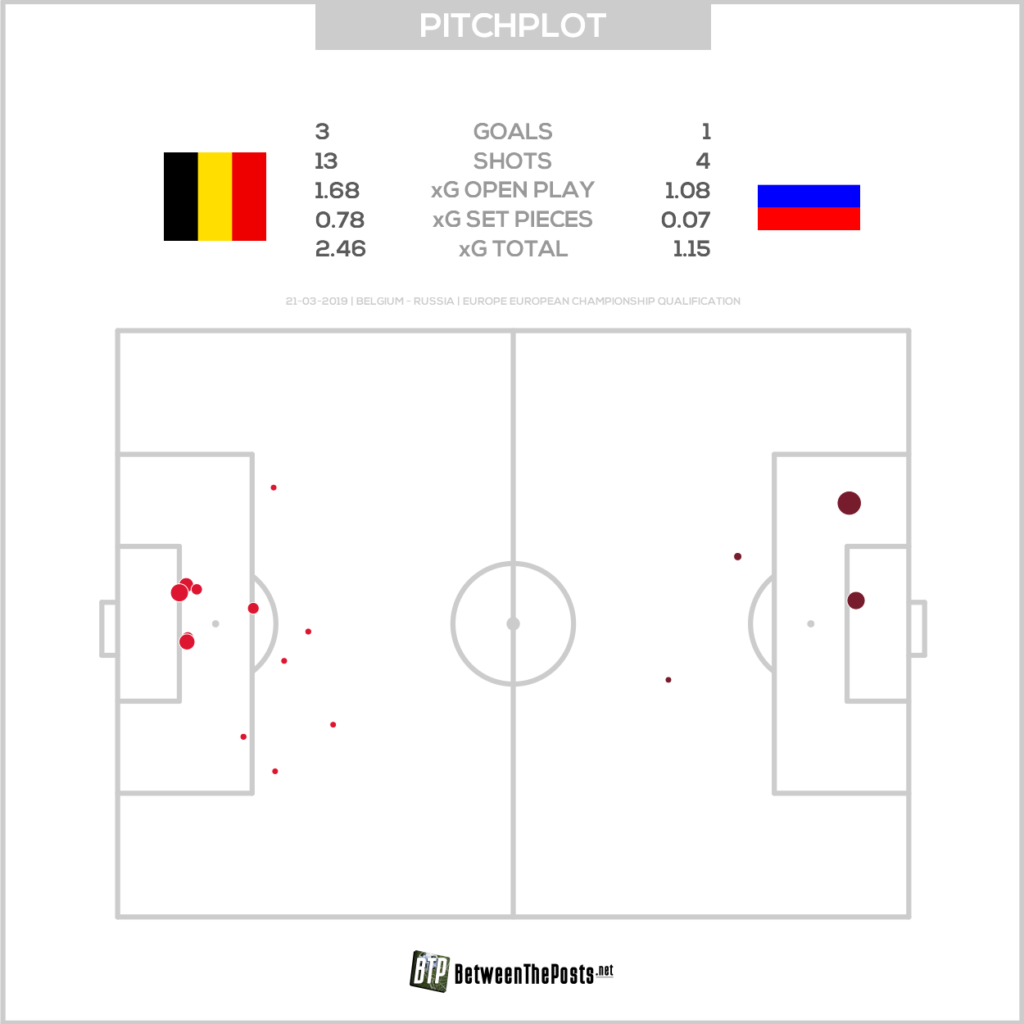 For what looked like such an optimistic first half hour by Russia, the following hour of play was entirely disappointing. The difference in intensity levels may have been the most worrying aspect of their performance compared to Belgium, who, despite still not looking majorly convincing, managed to outdo them in almost every respect by the end of the match.

Despite losing this opening game, it was still Russia’s toughest trip of the group, so you would expect these two sides to finish in the two qualification spots come the end of it. 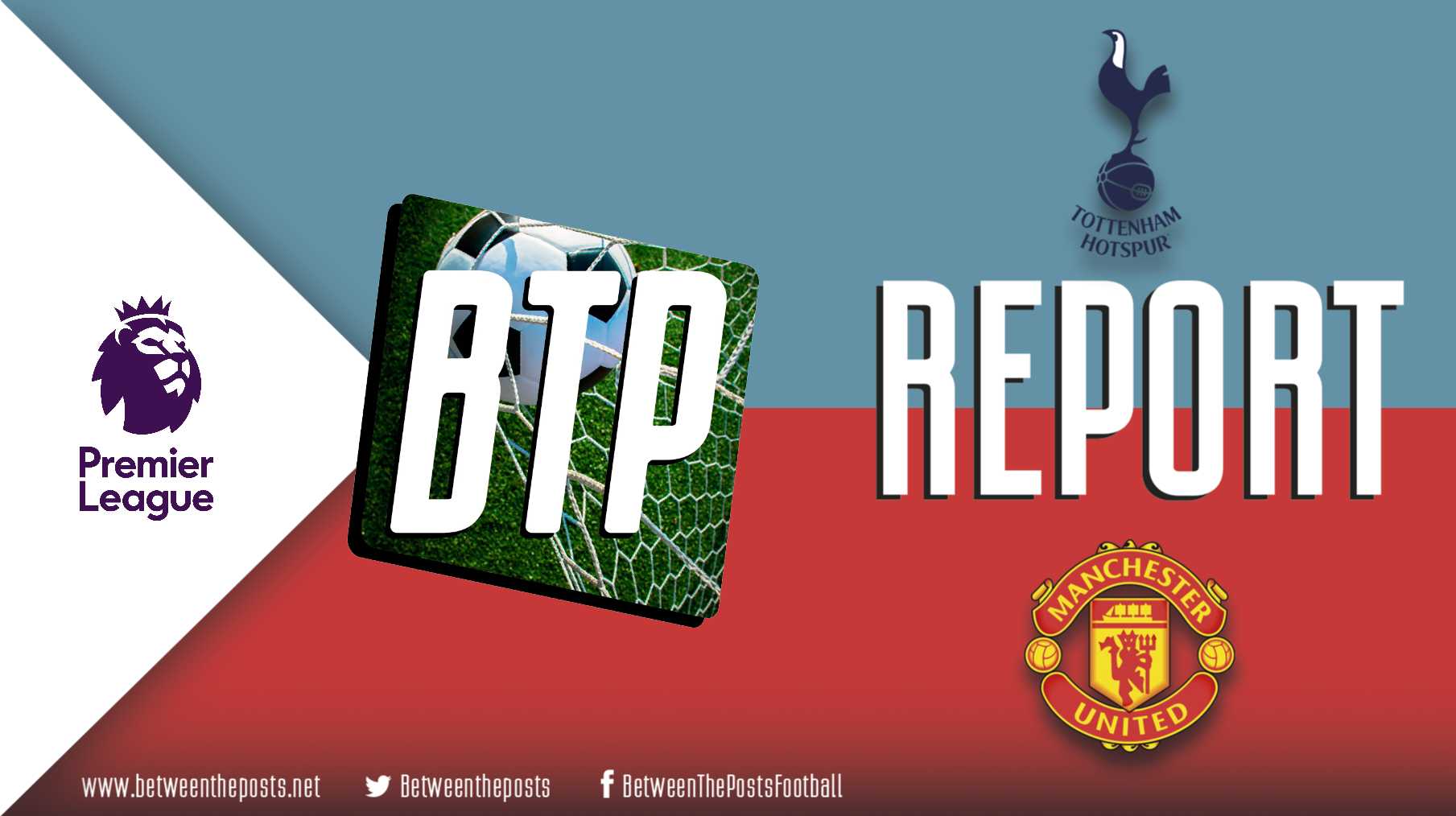