For the second time in two weeks, Ajax and Benfica prove to be very evenly matched teams. Where the first meeting between these two sides was an end-to-end, dynamic affair, the return-leg in this crucial Champions League group stage game was more of ‘a tale of two halves’.

In the two weeks since their first meeting, Ajax and Benfica have experienced very different situations in their respective domestic leagues.

Ajax booked two home wins on cruise control. First, the highly-anticipated Klassieker, Ajax’ rivalry game against Feyenoord, was basically decided after five minutes of play, when Feyenoord’s right back Jeremiah St. Juste eliminated any of the away team’s chances by grabbing a red card. Ajax converted the ensuing 85 minute man-up advantage into an easy 3-0 win.

Last weekend, Willem II made it an even easier outing in the Johan Cruijff ArenA, by using a man-oriented 3-5-2-system that gave Ajax chance after chance in the opening half hour, which led to a 2-0 lead that was played out in a boring exhibition-type fashion.

Benfica, on the other hand, have severely hurt their chances of winning the domestic title in the past two weeks. Losses at Belenenses (2-0) and at home against Moreirense (1-3) – both mid-table sides, at best – mean that Benfica see FC Porto and surprisingly strong Sporting Braga slowly drift away from them at the top of the league standings.

Benfica blitz early on, Ajax have no response

These two very differing run-ups to this key group match made for an extremely interesting opening phase of the game. Benfica’s coach Rui Vitoria has been on the proverbial hot seat, ever since the last-minute loss in Amsterdam. And his team came roaring out the gates like a squad that was fighting for the manager’s job.

Benfica did so by ramping up the press when Ajax was building up from the back. In the first game between these two in Amsterdam, Benfica caused Ajax issues by luring the full-backs and defensive midfielders into pressing traps around the midway line. In Lissabon, Benfica’s approach was much more aggressive. 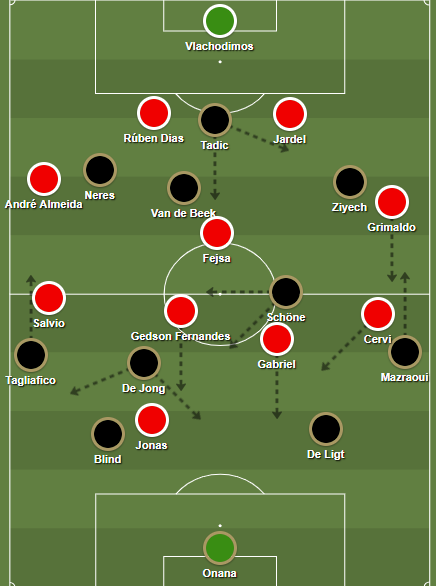 When Ajax’ center-backs Matthijs de Ligt and Daley Blind tried to start new possessions, either left winger Franco Cervi or one of the central midfield duo of Gabriel and Gedson Fernandes would join striker Jonas up front to press hard. If Cervi did so, left-back Grimaldo would move forward and pick up Ajax’ right back Noussair Mazraoui. If Gabriel or Gedson would be the second striker up front, defensive midfielder Ljubomir Fejsa would step up and fill the vacated zone in behind them.

That Benfica deployed a front press that required the front six (or even seven, with Grimaldo) to cover loads of ground basically every time Ajax started a new attack, might be the main reason that star playmaker Pizzi and speedster Rafa Silva – who excelled in the first game against Ajax – were benched for the intense chasing of Gabriel and Cervi.

Even though the Dutch Eredivisie is a league where give or take 16 out of the 18 teams genuinely believe that games should be won ‘by own initiative’ – believe me, this sounds more fun than the naïve end result this state of general madness usually delivers – this young Ajax team has not had loads of experience in dealing with a coherent, ultra-aggressive press like the one Benfica served up in the first thirty minutes of this game.

This high-octane press eventually caught up with André Onana, of all people, in the 28th minute. Onana is a goalkeeper with extreme confidence when the ball is at his feet. The type of confidence of the ‘no risk it, no biscuit’ variety. He almost gifted Jonas the opening goal, after the veteran Brazilian attacker made one of his several excellent double-runs  When a player runs towards an opponent and at the same time makes sure the player or zone he was marking at first can not be played in directly, this is called a double-run. of the half at Onana. The Cameroonian goalie punted the ball out of bounds. Onana then hugely misjudged the ensuing long throw-in, by Eduardo ‘Toto’ Salvio. Jonas, thirty seconds after nearly being gifted a goal, did get the chance to unwrap the next present he got, and scored the 1-0.

Ajax struggle with cluttered center of the pitch

Ajax first shot of the game came in the 38th minute, from a Hakim Ziyech free kick. Their next shot, tellingly, also came from a set-piece. Lasse Schöne swerving long-range free kick led to Ajax’ biggest chance of the game: Donny van de Beek panicked a bit when he got a fortuitous rebound, with teammate Frenkie de Jong waiting unmarked to tap it in near the goal-line, and instead tried to score by himself from a tight angle.

Van de Beek had an unlucky game in general. Coach Erik ten Hag did not choose between him or David Neres as the third attacking midfielder – which is usually the weekly tactical conundrum for Ajax’ manager – because he fielded them both. Striker Kasper Dolberg was left out instead, with winger Dušan Tadić playing as a false nine, like he did successfully in the away draw against Bayern München (1-1).

With a false striker in Tadić up front and deep-lying playmaker De Jong dropping back unusually often between or next to the two center-backs in the build-up, Ten Hag wanted to control the center of the pitch in possession. Captain De Ligt even admitted after the game that the game plan was to initially ‘play it around at the back, until Benfica starts to come forward too much, to exploit the space in behind’.

This plan backfired. At the back, Ajax committed too many central players to the build-up. Up to the 1-0 in the 29th minute, with Benfica pressing heavily, this functioned as a nice safety blanket. But when Benfica dropped back in a tighter 4-1-4-1 block after the opening goal, the numerical disadvantage in central midfield, with De Jong hanging back, meant that Ajax were forced to create chances via the flanks. Which is not the modus operandi of Ajax. This team thrives when the creative wingers can cut inside and contribute centrally.

Ajax was helped back into the game by some sheer luck, but also by sheer brilliance of their star player. First, in a span of ten minutes, Salvio and Jonas were forced to exit the game with injuries picked up in the first half. The interplay up front between the versatile Jonas, Salvio and Cervi was Benfica’s main source of danger before the break, and now had to be replaced by the more workman-like targetman Haris Seferović and the direct running and dribbling of Rafa Silva.

The forced changes did not do Benfica’s play any good. And they were followed up by a moment of brilliance by Hakim Ziyech. The Moroccan playmaker, who was invisible up to that point in the game, created Ajax’ first chance from open play in the 61th minute, which immediately resulted in a goal.

Ziyech dropped back deeper than he ever did in the first half, collected the ball around the halfway line, and lasered a touchdown pass to Tadić behind Benfica’s defensive line that Aaron Rodgers, Tom Brady or Drew Brees would have been proud of. Tadić scoffed his first attempt, which accidently led to him circling keeper Vlachodimos, and the Serbian did not fail to connect on his second attempt, to make it 1-1.

This equalizer out of thin air exposed a problem for Benfica that was becoming ever more clear as the game went along: the Portuguese side struggle mightily to create meaningful offense from longer spells of possession this season. Benfica looked fine for long stretches of this game, stretches wherein Ajax was dominating the possession count. But after the 1-1, Benfica’s only real chances to score the winner came from a last-gasp all-out attack in stoppage time.

And these few minutes turned out to be Onana’s time to get his shine back. First, the ever-confident Ajax goalie decided to lift up the ball with a tap in a fully crowded penalty box, before booting it clear. He finished the game out even flashier, with two very elegant reflex saves on close range efforts by Rafa Silva and Gabriel.

Takeaways
Benfica has to beat Bayern in Munich in the next group game to keep their hopes of advancing to the round of sixteen in the Champions League alive. This… is quite an upset. Because this also means that Ajax is now truly on the cusp of advancing to the final sixteen of a tournament they failed to even qualify for in the past three seasons.