Benfica – Ajax: Eagles Ascend From Adversity To Keep The Contest In The Balance (2-2)

Ajax have flown the flag for the outsiders in the Champions League, but they locked horns with another outfit keen to throw a shock bid into the ring. What manifested was a duel that shone a light on the frail and fantastic of the Dutch champions, teeing up an enthralling second leg.

Many would have dismissed Benfica ahead of the group stage phase. Indeed, straggling 12 points off of the top of the table, no longer in the hands of icon Jorge Jesus, their Premeira Liga campaign has underwhelmed. But the bright European lights in midweek have inspired this outfit to turn back the clock and fulfill tradition. Sealing a 3-0 win over Barcelona at the end of 2021, they outstripped the Catalans to seize second place in Group E. To go further, however, would be a much thornier task.

Ajax’s season has been an emphatic success. Comparisons to the 2018/19 team have abounded, but one can judge the latest collective on their own merit. One of only three clubs that can lay claim to a flawless record of six wins from six group stage games, their fluid rotations, and precocious youth carry the hallmark of an institution that has set the standard for pioneering football. Now they seek to embody the role of dark horses once more, taking a step to the final eight of the Champions League.

While Jesus mainly selected a 5-2-3 shape at the start of the season, new manager Nélson Veríssimo has used a back four. To this end, his men lined up in their usual 4-4-2 formation. He made only one alteration to the starting eleven that drew 2-2 with Boavista on the weekend. Gilberto made way for Valentino Lazaro on the right of the back four. But all eyes were on Darwin Núñez, whose form in front of goal, featuring three goals in the competition, was the most blatant threat to Ajax’s prospects.

Ajax manager Erik ten Hag likewise refrained from making many changes. Ahead of kickoff, Jurrien Timber was a doubt at the back. He slammed into a post upon scoring the match-winning goal against Willem II last time out, but he was fit to partner Lisandro Martínez. Remko Pasveer also held onto his spot between the posts. Therefore, the only modification to the lineup from the weekend was in the midfield. Ryan Gravenberch came back into the fold while Davy Klaassen dropped to the bench.

Many awaited the chance to see what Ajax could conjure on the ball. Ten Hag has astutely crafted a side with a fluent series of patterns and relationships: several of which were present here. Benfica set up in a 4-4-2 block where the front two pressed futilely. Unorthodox movements from the central defenders, in sync with the work of Edson Álvarez, created new angles to breach the resistance. 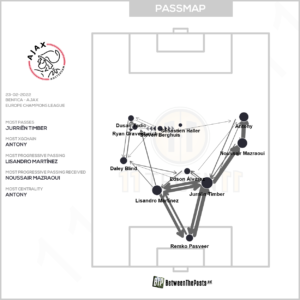 Once Ajax got to the halfway line, creative ideas continued to flow. Noussair Mazraoui and Antony threatened in tandem from the right flank. The right back’s relentless offensive contribution is particularly noteworthy in this system, switching effortlessly from inside to outside channels.

Interchange appeared on the left, where overloads were more common. One of the multiple variations of their offensive structure saw Daley Blind come inward to open up room for wide passes, Dušan Tadić rotate into the channel to pin the fullback, and Gravenberch move outward as the width holder. Such decoy runs and rotations stretched the last line, giving way to a range of strategic tools in the final third. A goal was not imminent, yet Ajax’s dominance in possession set out their intention.

Although Ajax showed a high level of flexibility with the ball, their plan off the ball was far much simpler. The winger on the far side frequently moved to cut off the outside access for one of the central defenders. From here, an asymmetry emerged between the roles of the wingers. Tadić fell back to follow Gilberto on the wing if he moved higher up the flank, whereas Antony did not have to defend so tightly to Álex Grimaldo. The 2-on-1 that Mazraoui faced could force Timber to slide out to mark Everton now and then. But all in all, a typically Dutch manner of man-oriented defense arose.

11th minute: defensive sequence from Ajax. Tadić marks Gilberto, dropping off to cover his dribble, while Blind is in a narrow position to close down the indented Rafa Silva. Note how Gravenberch then follows Gonçalo Ramos, facilitating a combination into the room on the edge of the penalty area.

This 4-2-3-1 structure has an element of versatility that does not render it as fragile as some defenses in the Eredivisie. Yet, its heavy man to man focus has laid bare holes in the past at the highest level. Ajax have not managed to solve this problem over the years, but the tedious nature of breaking such a system did work in their favor here. Indeed, in the 18th minute, the away team opened the scoring.

Building the play from the back, Odysseas Vlachodimos clipped an aerial pass into the path of Álex Grimaldo. The left back plucked the ball out of the air, but Mazraoui stole ahead of his opposite man. He whipped a precise delivery to the far post, where Tadić caressed a half volley with his weaker right foot into the net. Fulfilling his duties, the captain’s contribution had put Benfica on the back foot.

Even so, the Portuguese outfit fought back. Rafa Silva had nearly pulled his side level, drawing a deflection from Lisandro Martínez, whose ball contact diverted the ball onto the foot of the post. Pasveer was alive to the danger, but the ensuing set-piece was costly. Jan Vertonghen separated from Martínez at the first phase of the corner, then, from the rebound, he slipped away from Mazraoui in the penalty area. His drive into the six yard box found Sébastien Haller, who bagged an own goal.

Thankfully, it was only a few minutes till the tide swung in favor of Ajax. Ten Hag’s men worked the play out to the left flank, where Tadić bent a flat cross towards the near post: the poaching instincts of their primary marksman promptly kicked in. Reading his teammate’s intention, Haller stole a march on Vertonghen, steering the ball at goal. The goalkeeper parried away his effort, only for the Ivorian to tuck home the rebound at the second try. The visitors were keen not to squander their lead again.

Álvarez soon hit the post, while Gravenberch spurned an opportune moment to grab the third goal after the break. But unable to finish off the game, Ajax let Benfica grow in belief. Adel Taarabt’s dribbling and Grimaldo’s off-ball runs were a more consistent means of pinning back their marking.

However, still a goal down at the hour mark, Veríssimo turned to his options on the bench. In the 62nd minute, he brought off left winger Everton in place of striker Roman Yaremchuk. The Ukrainian was now a central point of reference, operating near Ramos, while Núñez moved out to the left wing.

The hosts continued to grow into the contest, striking at last in the 72nd minute. Timber had made yet another foray over the halfway line, arriving on the edge of the box. He danced away from Otamendi, who checked his stride, but the referee did not punish the body check. Now, Benfica had the impetus. Silva skipped free from Álvarez to tee up on a 4-on-3 on the break. He found Ramos, whose shot drew an acrobatic dive from Pasveer, but Yaremchuk headed the loose ball into an empty net. 2-2.

“I'm Ukrainian and I'm proud of it. Being thousands of kilometers from my home country, I want to support everyone who is currently struggling in my country. It's time to unite.” pic.twitter.com/qVebH2Ba8Q

Ten Hag reacted to the equalizer with a double substitution. Nicolás Tagliafico came on for Blind at left back, and Gravenberch swapped with Klaassen. The Dutch champions pushed to reclaim the lead for the third time, but the stalemate held firm. It would all come down to the game in Amsterdam.

Ajax will be the more frustrated of the two outfits. Their bravery, dynamism, and craft on the ball defined much of the contest. Yet, neither making the most of their dominance nor being fully stable at the back, they left the door ajar. Still favorites, they will hope the home support pulls them through.

When it mattered in the Champions League, Benfica raised their game. They ran the favorites close, delivering a display after the break worth a tight outcome. Veríssimo will take encouragement from this draw, seeking to inspire his troops to mimic this resilience in what will be a gripping return leg. 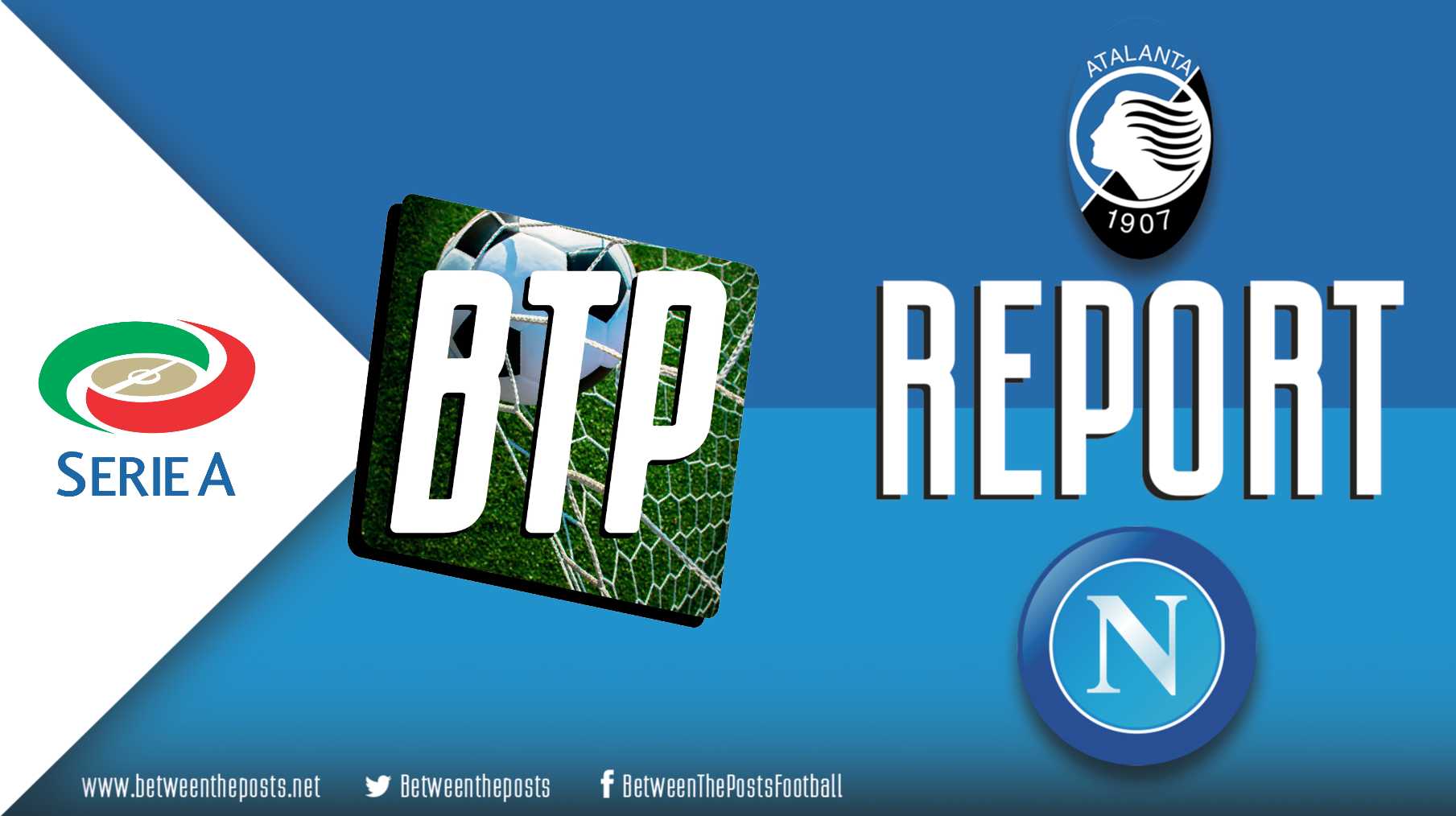 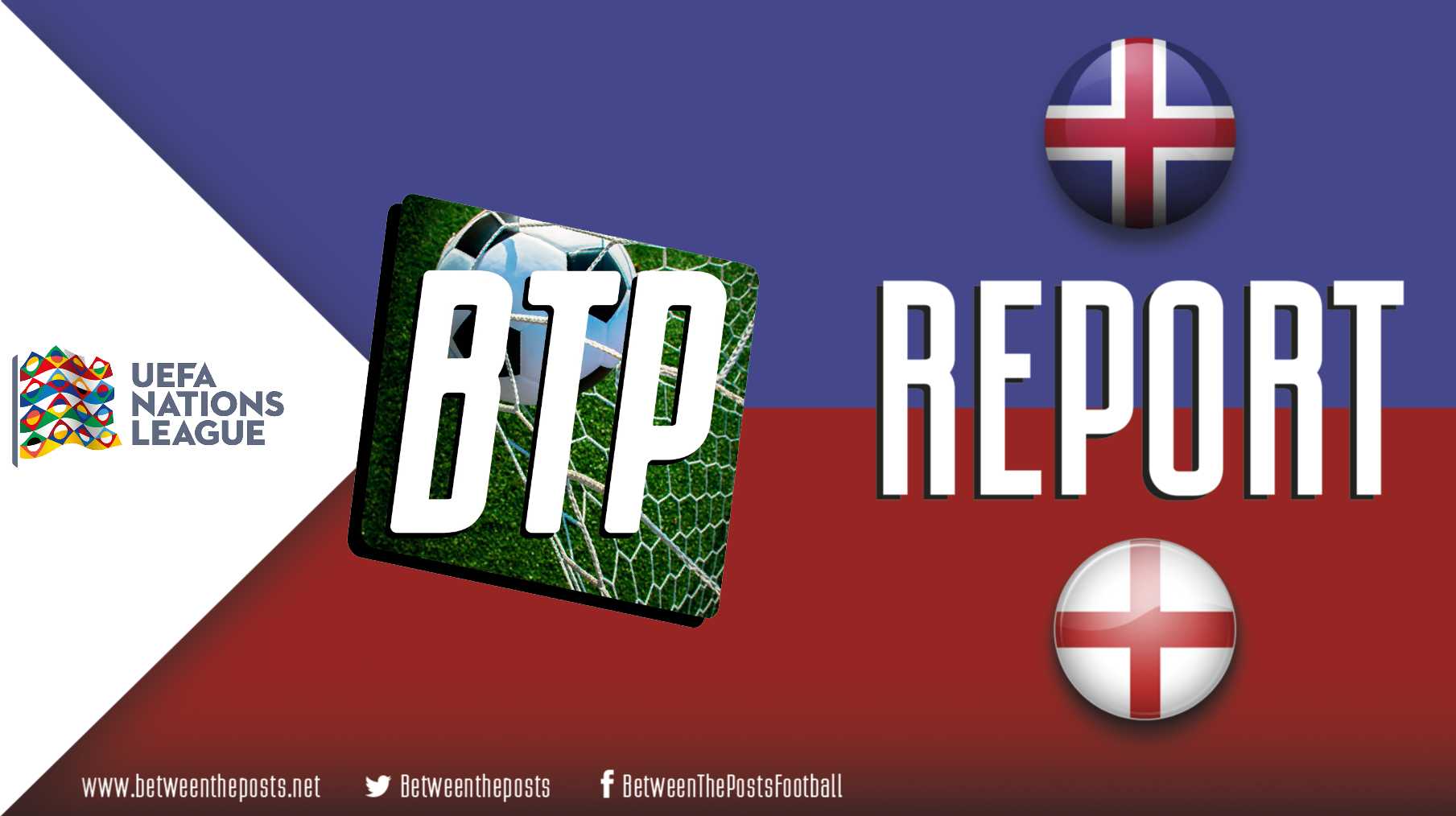