Benfica took the first leg of this tight Champions League qualifier tie. Early in the game, they bypassed the PSV press and scored. Afterwards, Benfica stepped back and remained compact while PSV struggled to break down their defensive block and create good chances. Benfica clinched another goal via a corner kick while PSV finally got a goal once the game opened up during the second half, setting things up for a thrilling return leg.

Under Roger Schmidt, PSV has quickly improved the structure of their pressing, which provides a valuable upgrade for both defense and offense. Upon the departure of star forward Donyell Malen, young forwards like Cody Gakpo and Noni Madueke have stepped up. This tactical structure and young talent have allowed PSV to achieve big victories against Galatasaray and FC Midtjylland in previous Champions League qualifying rounds. However, they faced their biggest challenge yet in the Benfica of Jorge Jesus.

With the signings of Joao Mario and Lucas Verissimo, Benfica seems to be settling into a more defined tactical identity. Jesus has adapted to his squad, and this team does not do the kind of intense pressing he has used in previous teams like Flamengo. Thus, this Benfica team can move the ball well and knows when to pragmatically stay back when needed.

Benfica started the game with a 5-4-1 lineup. The defensive line featured a back three of Morato, Nico Otamendi, and Lucas Verissimo. Midfield featured a double pivot with Julian Weigl and João Mario, with Pizzi and Rafa Silva as wingers who received the ball between the lines rather than on the wings. Pizzi operated in a deeper role while Silva acted more as a forward. At the tip of the spear lay striker Roman Yaremchuk.

PSV started in the usual 4-2-4 shape that Schmidt has deployed since the start of his Eindhoven tenure. The center-back pairing of André Ramalho and Olivier Boscagli defended the goal of Joël Drommel, with Philipp Mwene and Philipp Max as right and left-backs, respectively. Midfield featured a double pivot of Marco Van Ginkel and Ibrahim Sangaré. Meanwhile, the front four featured Cody Gapko on the left wing and Noni Madueke on the right wing. Mario Götze acts as a ten, linking up the double pivot with the attack, while Zahavi acts as the striker.

The initial 15 minutes of the game saw Benfica dominate. They played out of the back in a 3+2 shape formed by the three center backs and double pivot. Ahead of this 3+2, Pizzi and Rafa Silva stayed narrow and in the half-spaces, ready to receive behind PSV’s midfield line. Meanwhile, wingbacks Grimaldo and Gonçalves provided attacking width in this narrow formation.

This scheme gave Benfica the advantage against PSV’s pressing attempts. The away side’s pressing scheme focused on cutting off access to Benfica’s double pivot. PSV wingers would step up if their corresponding center back had the ball while Zahavi would press Otamendi in the center. Meanwhile, Götze, Sangaré, and Van Ginkel would follow João Mário and Weigl, making sure they couldn’t receive the ball comfortably. Fullbacks Max and Mwene stepped up whenever a Benfica wingback was about to receive the ball.

However, none of these PSV players blocked the passing lane from the Benfica center backs to wingers Pizzi and Rafa Silva. The wingers could receive the ball clear of the PSV double pivot, who focused on Benfica’s double pivot, and the PSV fullbacks, who focused on the wingbacks. Benfica center backs used this pass several times in the first fifteen minutes to bypass the PSV press. 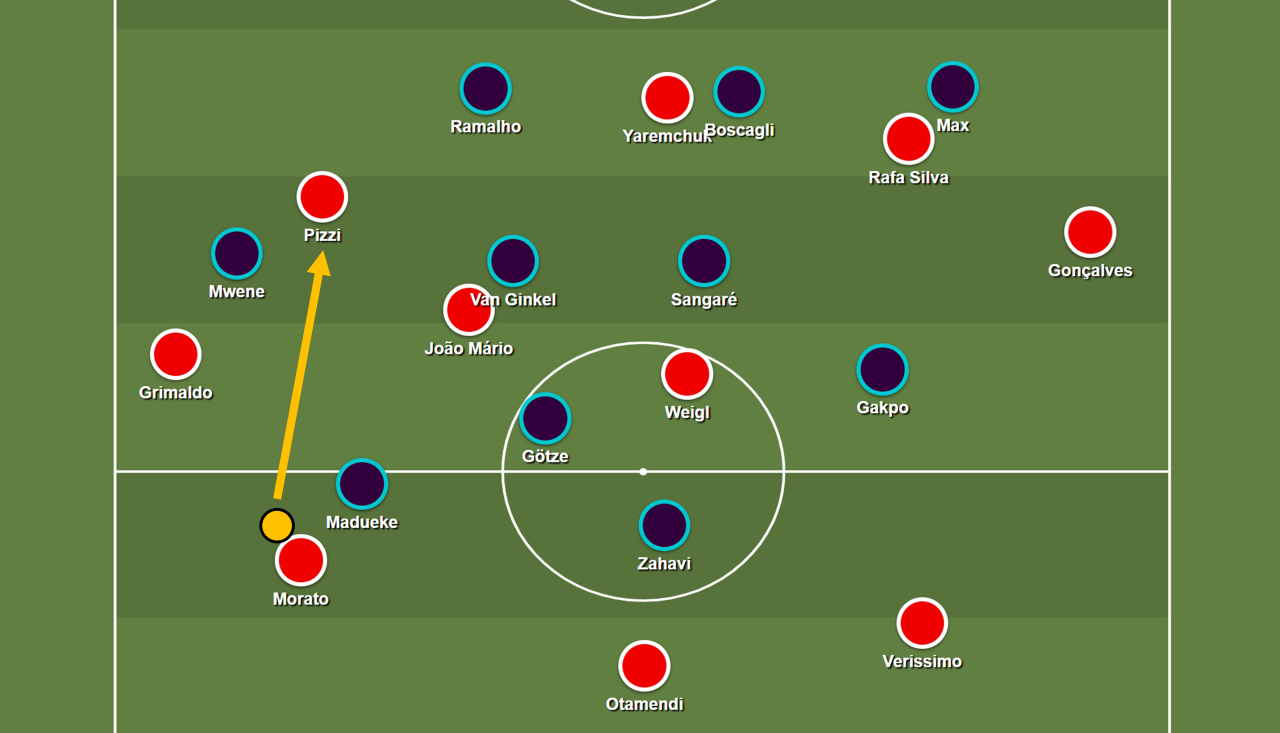 The situation that led to Benfica’s goal. Benfica builds up in a 3+2 pressed by PSV’s 4-2-4. Benfica center back Morato found an open passing lane to winger Pizzi.

Benfica steps back, and PSV adjusts their press

Before the goal, Benfica sent João Mário and their forwards to press and counterpress when they lost the ball. A couple of minutes after the goal, PSV bypassed this press and created a dangerous attack on the counter through Götze and Gakpo. Benfica took a more passive defensive approach afterward, mostly avoid pressing and staying in a compact 5-4-1 block.

The compact Benfica defense denied space to PSV attackers, who could not find numerical or positional superiority. Wingers Gakpo and Madueke, the best one-versus-one players PSV had, did not have the space to dribble and beat their markers. PSV midfielders and forwards could not combine and move the ball quickly enough to overcome their opponent’s defense. 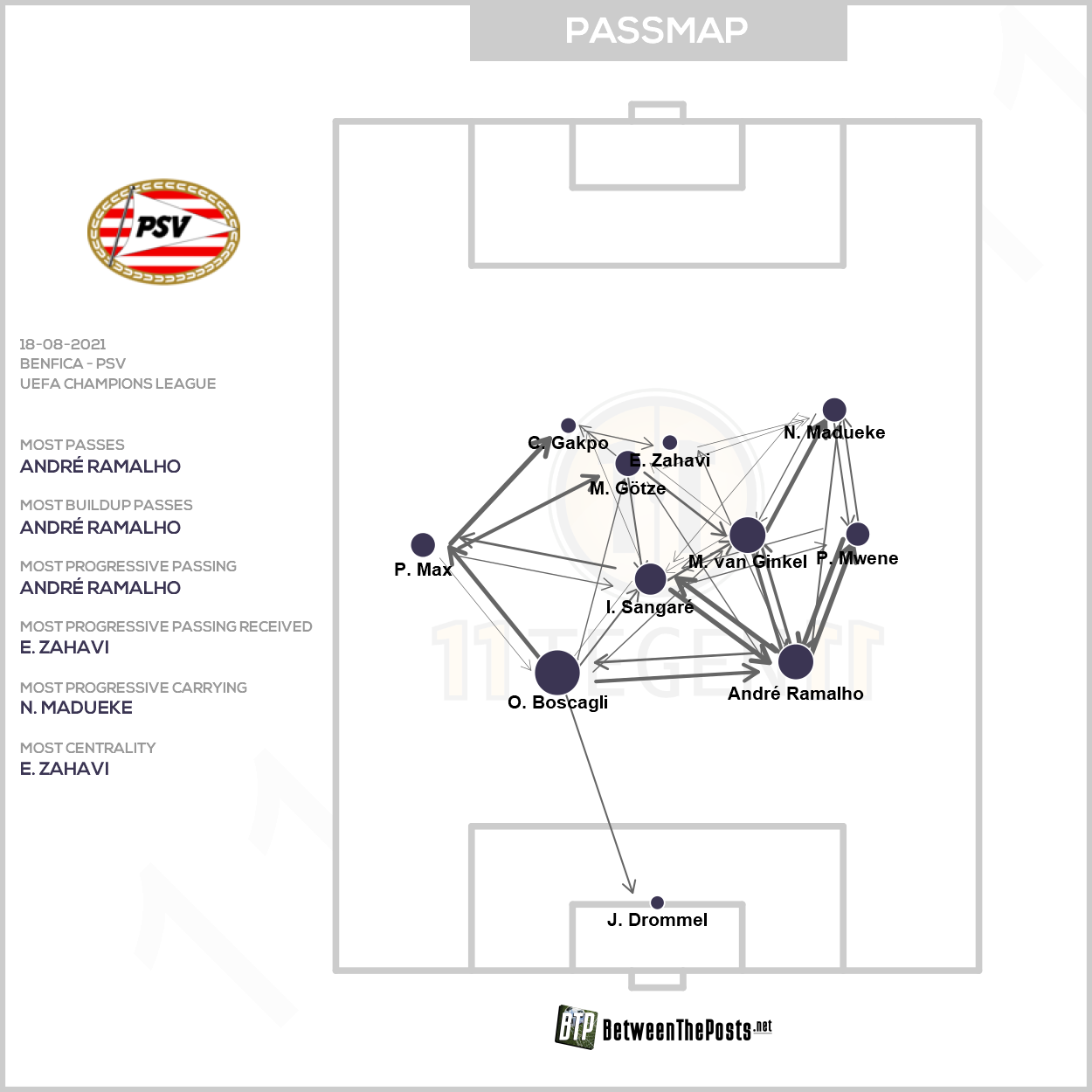 However, Benfica’s defensive line sometimes had to stay high, sometimes even as high as the center circle, to maintain this compactness. PSV’s most successful attacking mechanism in the first half took advantage of this behavior. Ramalho and Boscagli sent long passes behind Benfica’s defensive line to the fast Madueke and Gakpo. These passes led to a few dangerous attacks, including a goal from Gakpo at the 28th minute overruled by a close offside call. 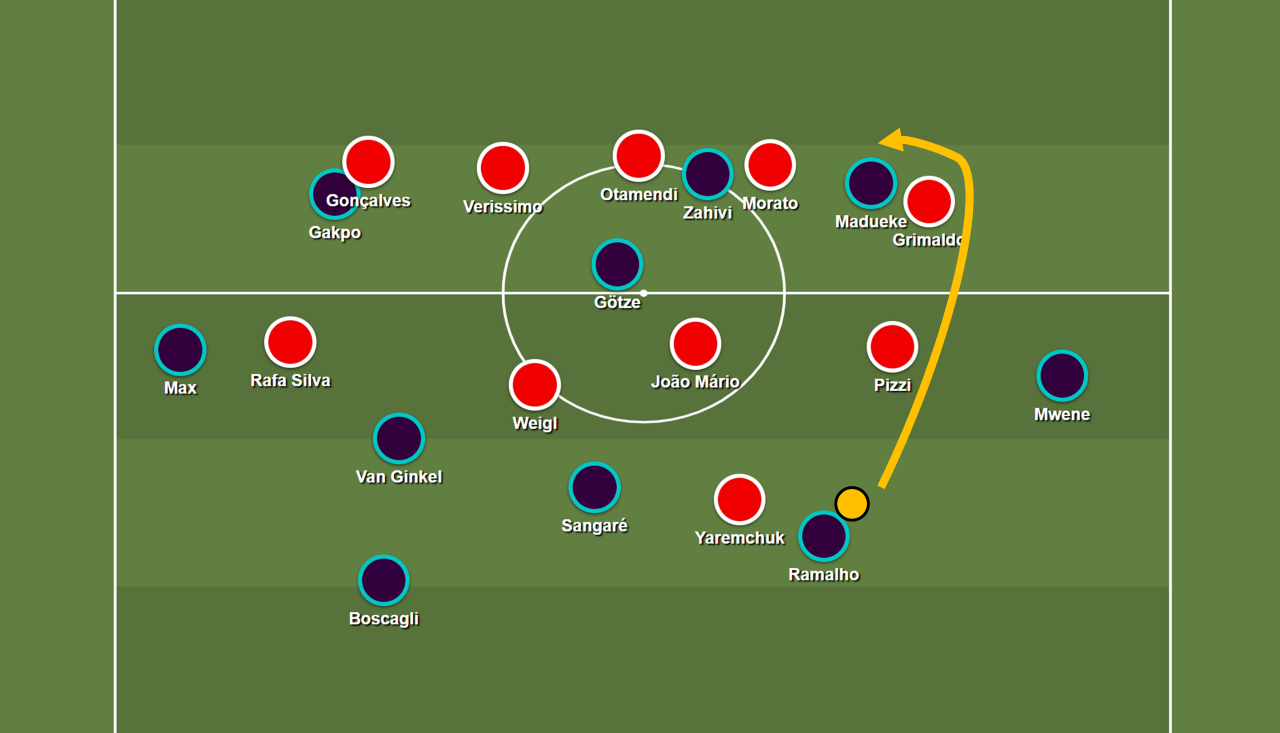 Meanwhile, as PSV figured out ways to attack when they had the ball, they also adjusted their pressing. PSV wingers stopped jumping so aggressively on the Benfica center backs, and the PSV double pivot also took a step back. This more passive defensive behavior shut down those passing lanes between Benfica center backs and wingers.

However, even with these adjustments, Benfica had the best chances of the first half. In the 27th minute, Rafa Silva managed to receive in between the lines and slip a through ball to Yaremchuk, forcing a huge save from Drommel. Benfica’s second goal, another big chance in the box, happened through a set piece. After a tremendous long-distance shot from Verissimo was saved by Drommel, Benfica was awarded a corner kick at the 42nd minute. PSV players did not win the following header and bounces in the box, and Weigl managed to put the ball in the back of the net.

Despite improving their pressing and attacking game, PSV got only one shot in the box during the first half. Even though their passes into space and the dribbling of Madueke created dangerous attacks, the final passes were often intercepted or cleared by a focused Benfica defense.

The Second Half Opens Up and PSV Scores

The second half started with more aggressive behavior from Benfica. They pressed and counter pressed intensely, with the forwards harassing PSV’s keeper and center backs, while the double pivot of João Mário and Weigl tracked PSV’s double pivot. This aggressive defending led to Benfica getting closer to another goal.

However, this pressing and attacking also meant that Benfica lacked the compactness of the first half. PSV attackers now had more space to receive the ball and run at Benfica defenders. The first warning came at the 48th minute when Van Ginkel headed a great cross from Götze and forced a big save from Vlachodimos. In the 51st minute, PSV’s insistence finally led to a goal. Max stole the ball from João Mário and gave it to Gakpo. Gakpo ran at Benfica’s defensive line, cut inside, and let loose a low but powerful shot that bounced past the keeper.

Benfica reacted to this goal with a series of attacks. Pizzi changed his first-half behavior, switching to the right wing and receiving the ball close to the sideline instead. He initiated combinations with Gonçalves and João Mário that led to dangerous chances that forced last-ditch interventions from PSV defenders.

Tactical schemes did not change significantly with these substitutions, and both teams lost steam afterward. The xG plot below shows that Benfica did not create a single shot in the final half-hour, and PSV only created two. A rather dull ending to an exciting game. 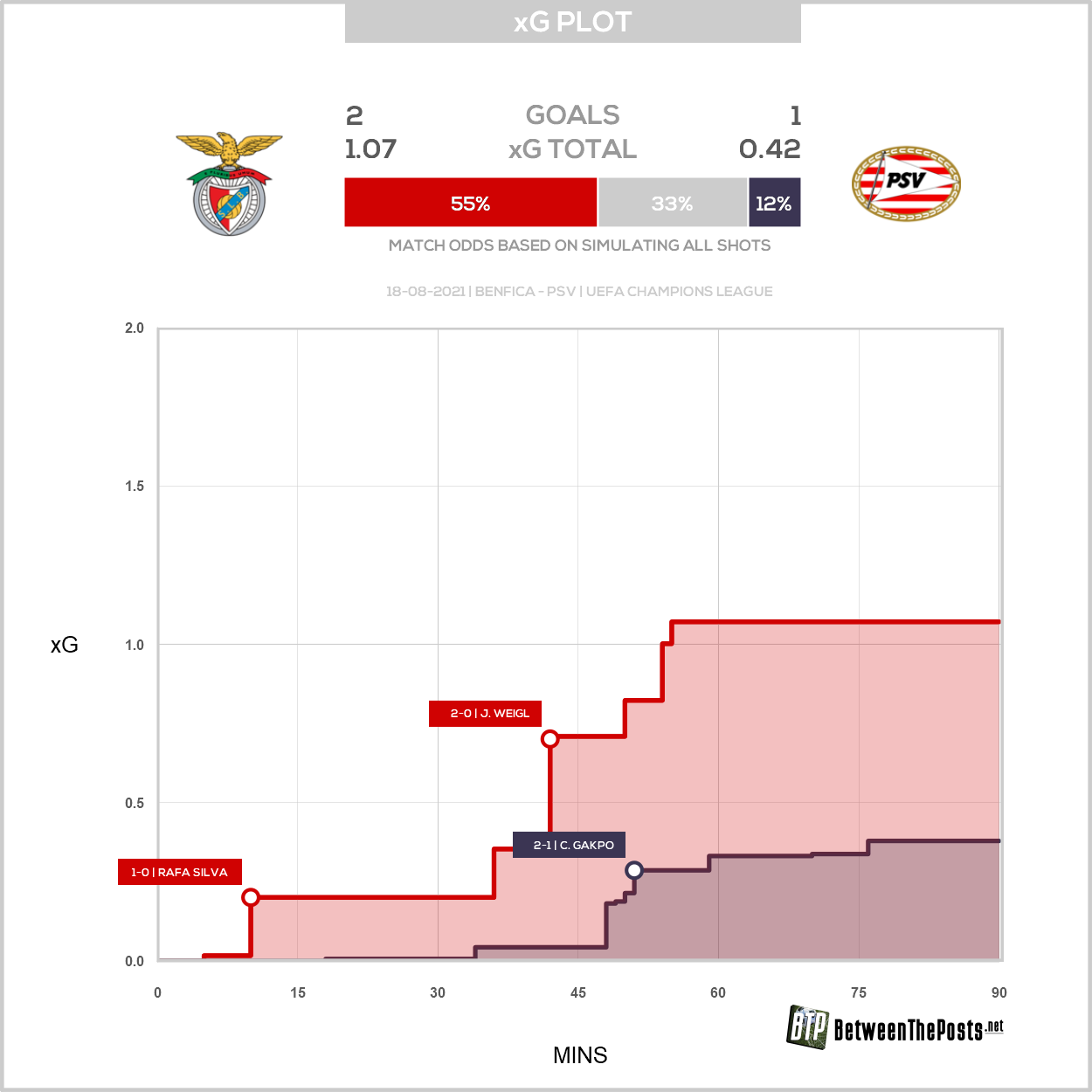 While PSV had more possession and control throughout this first leg, that didn’t translate into more and better chances than their opponents. Schmidt’s PSV looks more threatening in transitions and open spaces but struggles more when taking the initiative against deeper, compact blocks. On the other hand, Benfica has a good plan when combining possession and counter-pressing, but they seem to lack the speed for fast transitions and counters. That puts them at a disadvantage when they choose to defend deeper as they did against PSV.

All in all, PSV’s goal sets up a close and exciting return leg in Eindhoven. Which team dominates will come down to who can set up a favorable tactical context. If PSV forces an open game with lots of transitions, the speed and one-versus-one ability of Gakpo and Madueke can give them the edge. If Benfica can maintain compactness and a slower game tempo with longer possessions, they will have the edge. 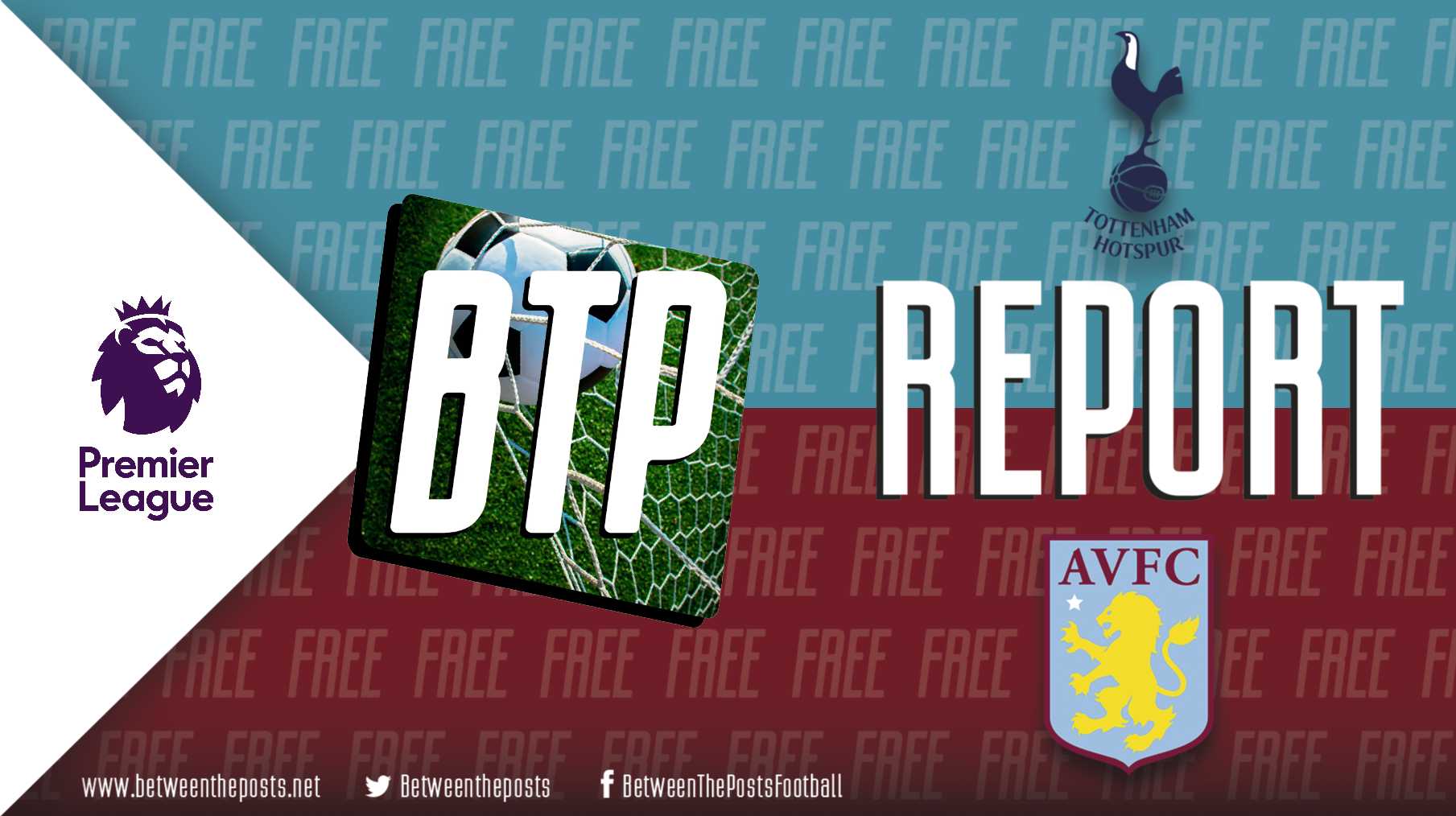 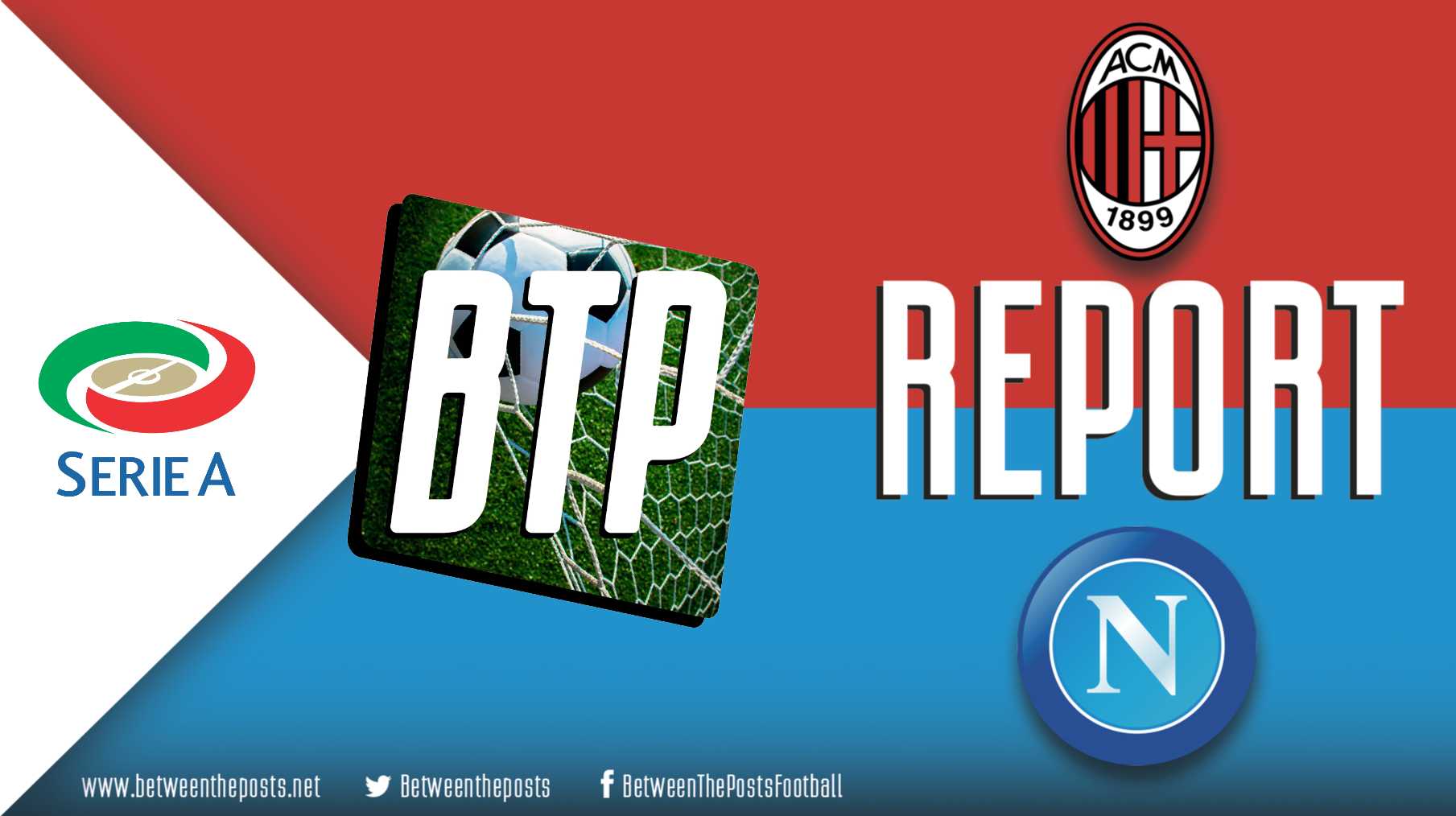