Welcome to the international primer of Between the Posts! In this article, you can find out which UEFA Nations League matches are going to be featured on our site during the international break, including a little preview of these games.

This first game between these two teams… was pretty ugly. Spain totally demolished Croatia, 6-0 being the final score in Elche. If the World Cup finalists want to avoid relegation from League A, now is probably the time to get some wins, as they currently have one point from three games and are dead last in this group.

At the World Cup, manager Zlatko Dalić showed that his team can play multiple styles. Against Spain – possession, press, possession, press – they will probably try to sit back a bit more and then strike with their direct counterattackers Rebić and Kramarić, who were both unavailable for the away match. If they opt to maintain possession and try to play out from under Spain’s press with Modrić and Rakitić, this might be a cracker.
Article to be written by Peter M. 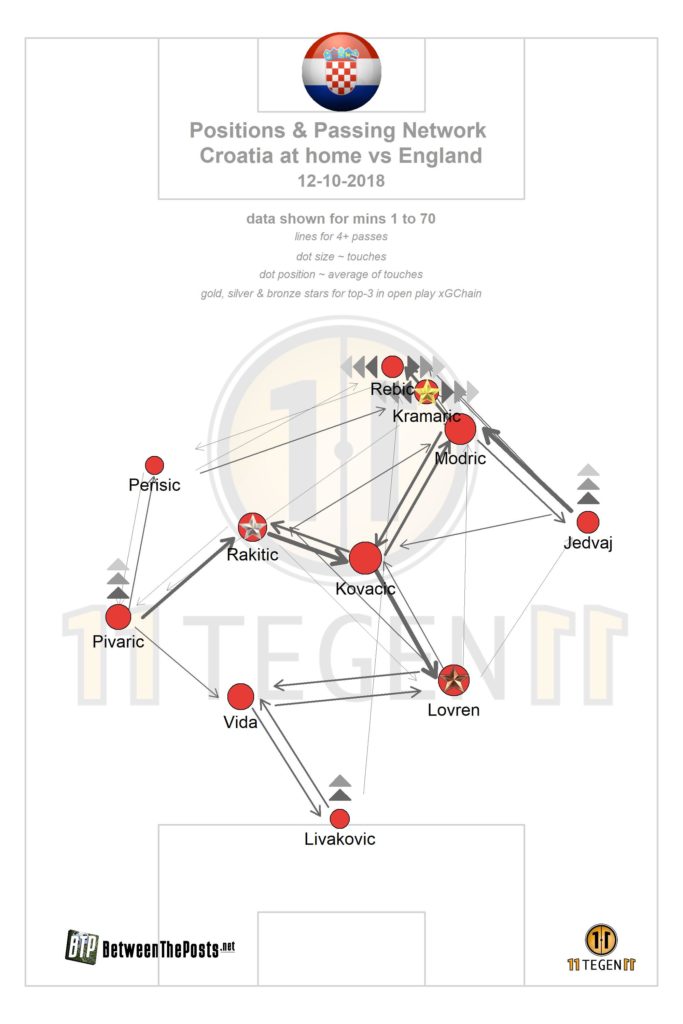 We all know how France became World Champions in Russia, right? They maintained a very cautious approach in possession, as three of their four defenders and the two central midfielders stayed behind the ball. France mostly relied on the talent of Griezmann and Mbappé to create chances out of thin air. Without the ball, they set up in a 4-4-2 shape with Umtiti, Varane, Pogba and Kanté protected the center of the pitch. (The oldest of those guys is 27, by the way. France might be around for a little bit.)

It is fair to say The Netherlands have a chance, though. Pogba is injured and in Paris, the Dutch team did a fine job progressing the ball up the field. The game was level as late as the 73th minute. Following their 3-0 win over Germany, The Netherlands actually have a decent chance of winning this group, but a result from this match will be needed.
Article to be written by Erik Elias 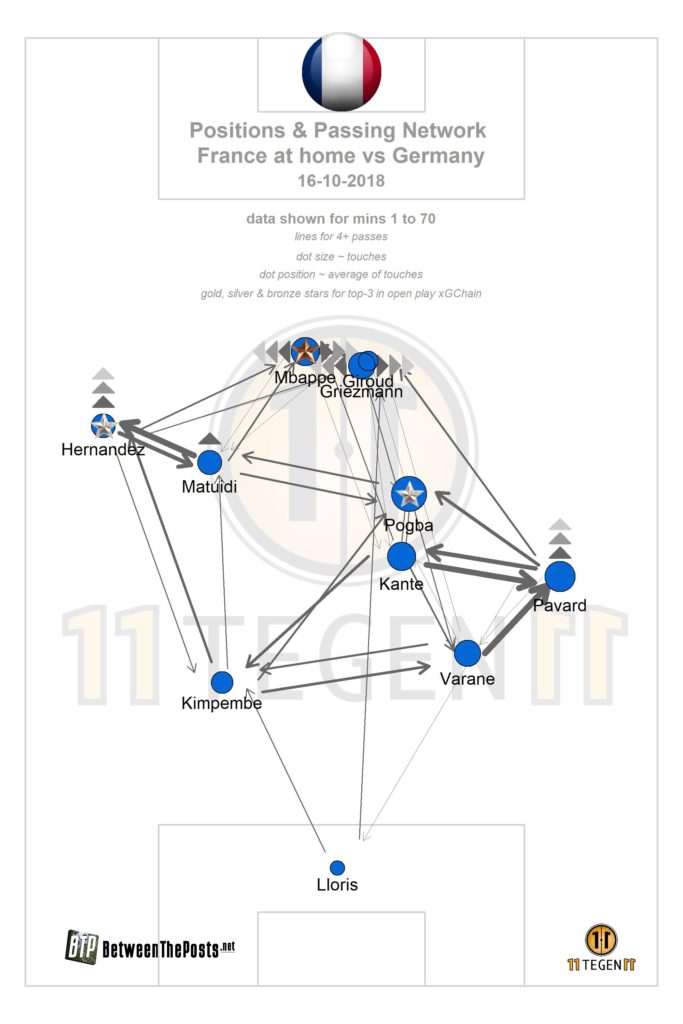 Italy feels like a team in between two eras. On the one hand, youngster Donnarumma is in goal, there are some lovely young attackers coming through in Chiesa and Bernadeschi, while Insigne still is only 27 years old. Jorginho and Verratti is a midfield duo almost every manager would love to start. On the other hand, the central defenders are getting quite old and the fullbacks’ positions are weakly occupied.

Cristiano Ronaldo has not been in Portugal’s squad for three international breaks running. The only thing manager Fernando Santos wanted to say about the subject was that Ronaldo ‘deserves to win the Ballon D’Or’. Whatever that might mean.

One would assume that a Ronaldo-less Portugal a lot less intimidating side, but Santos’ team managed to get six points from their opening two games nonetheless. A win against Italy makes them group winners with one game in hand.
Article to be written by José Perez 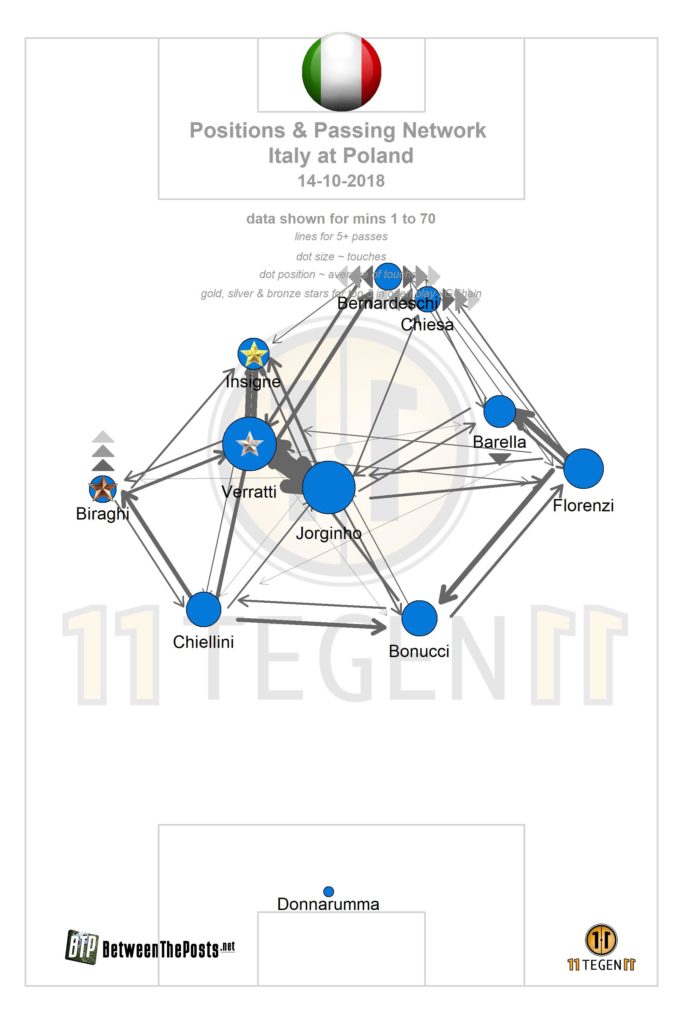 Gareth Southgate recently replaced his successful 5-3-2 World Cup system with the 4-3-3 setup he began with as an England manager. This might have been due to the definite emergence of young wingers Raheem Sterling and Marcus Rashford. Since it is impossible to bench Harry Kane, playing with three forwards allows Southgate to field all three prolific attackers.

England massively impressed away from home against Spain – playing with exactly those three forwards – in a game in which they ceded possession and struck viciously on the counterattack.

If Spain beat Croatia on Thursday, the final score in this group is already settled. If Croatia do get a result, this match turns into a direct confrontation to avoid relegation.
Article to be written by Peter M.

Joshua Kimmich, once again, is expected to start in midfield for Germany. This is like wielding a double-edged sword for Joachim Löw. You create a genuinely world-class double pivot 4-2-3-1 is one of the most frequently occurring formations in football. The two most defensive midfielders are called a ‘double pivot’. with Kroos and Kimmich, who make sure the build-up is top class. On the other hand, you totally take away offensive prowess from the wings, as Germany’s other fullbacks are not as offensively gifted as Kimmich.

Last time around against the Netherlands, Germany’s play in the final third looked stale and predictable as a result. The Dutch contained the Germans fairly well and bravely defended a lead they acquired through a set piece, before demolishing the Germans on the counterattack in the final fifteen minutes. (Hmm, Boateng and Hummels struggling with counterattacks, pattern?).

If the Netherlands lose or draw against France, this game is a direct confrontation to determine who gets relegated.
Article to be written by Sam Planting 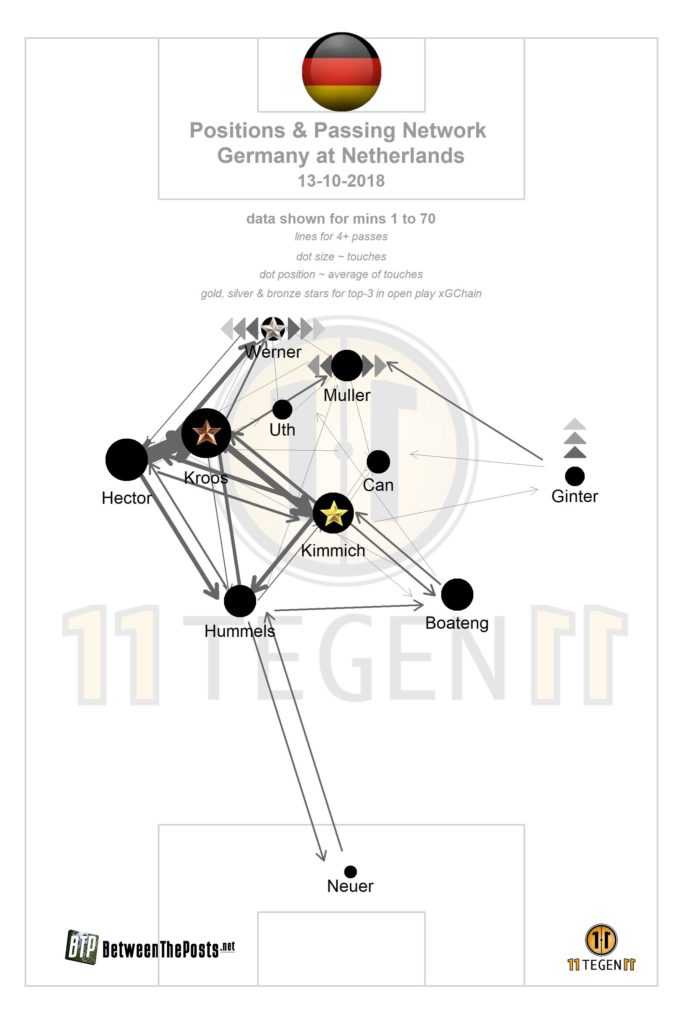