After a lot of turnovers in the first minutes, Leverkusen started to take control of the match. However, Dortmund were the one that took the lead; they were the better team until half-time with their quick combinations in attack. Leverkusen dominated possession in the second half, but three counterattacks from BVB in the beginning and the end of the second half decided the game.

Both teams started with two wins, but failed to hold the perfect record on matchday three. Despite lots of possession and outshooting Hoffenheim heavily, Leverkusen were held to a 0-0 draw before the international break. Borussia Dortmund deservedly received lots of criticism after losing 1-3 to newly promoted Union Berlin. Therefore, Dortmund were under pressure to win this game if they did not want to lose the connection to the first places.

Although the performance in Berlin was bad, Lucien Favre fielded nearly the same eleven, making only two changes. Łukasz Piszczek was replaced by left back Raphaël Guerreiro and Achraf Hakimi moved to the right back position. In addition to that, Julian Weigl had to take place on the bench after Axel Witsel returned from injury.

Peter Bosz made two changes in personnel and also changed the formation. Leverkusen used the 3-2-4-1 system the Dutch manager  used a lot last season, but did not use in the first three games. Kerem Demirbay missed the game and was replaced by Nadiem Amiri, Leon Bailey was sacrificed for the new formation, with defensive midfielder Julian Baumgartlinger coming into the starting lineup.

Right from the beginning, both teams pressed high in an attempt to win the ball back early. Against the ball, Leverkusen operated in a 4-3-3 formation. The wingers Kai Havertz and Karim Bellarabi were meant to pressure Dortmund’s center-backs. Dortmund struggled to play the ball out from the back and had to use many long balls.

However, just like Leverkusen, Dortmund pressed well too,setting up in a 4-4-2 / 4-4-1-1 formation. Because Leverkusen played with a back three in possession, Jadon Sancho and Julian Brandt pushed up to press Jonathan Tah and Wendell – the wider center-backs. Paco Alcácer and Marco Reus then tried to block the passing lanes to the other side by closing down the central center-back and the ball-near defensive midfielder. 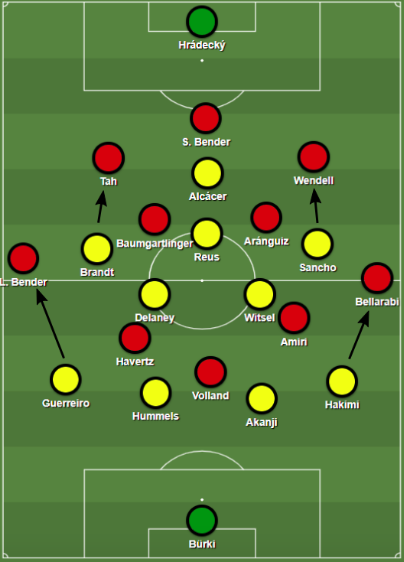 Leverkusen’s offensive and Dortmund’s defensive structure. Guerreiro and Hakimi pushed up to pressure the opponent’s wing-backs.

Dortmund’s pressing idea was okay and they created some turnovers with it, but most of the time, Leverkusen could use their six-versus-four numerical advantage in the buildup. Because of that, the guests were the first team that were able to dominate possession. When that happened, Dortmund switched to Favre’s vintage medium block, A medium block refers to a team that retreats in their own half out of possession, generally only disrupting their opponents some way into their own half. where they still used a 4-4-2 / 4-4-1-1 formation. They tried to guide Leverkusen’s buildup to one side and isolate them there by closing down the passing lanes. Leverkusen, however, tried to attract Dortmund’s pressing on one side and switch the game to the other side. Both ideas clashed, with bucketloads of turrnovers and neither team having an advantage.

Despite having lots of possession, Leverkusen struggled to advance the ball in the final third. The one-third of the pitch that is closest to the opposition’s goal. The first big chance of the game came to the hosts in the twenty-fifth minute. Dortmund used their famous overload When one team has more players in a certain area or zone than the other team.in the right halfspace If you divide the field in five vertical lanes, the halfspaces are the lanes that are not on the wing and not in the center. Because there is no touchline like on the wing, players have the freedom to go everywhere. But this zone often is not as well-defended as the very center. This makes it a very valuable offensive zone to play in and a lot of chances are created by passes or dribbles from the halfspace. and quick combination play. The movement of Reus pulled Sven Bender out of position and opened the space for Alcácer to run into. Lukáš Hrádecký pulled off two great saves against Reus and later Brandt to deny Dortmund the lead.After that chance, the game became more open again, which turned out to be an advantage for Dortmund. A few minutes later, they eventually scored the first goal of the match.

In the buildup to that goal, Leverkusen pressed high, to force Dortmund to play a long ball. However, Sancho and Reus had too much space and were able to combine their way out of the press. Leverkusen were able to defend this attack, but gave the ball away easily right after. Hakimi found Alcácer with a cross to take the lead.

Leverkusen struggled to control the fast-paced attacks coming from Borussia and were lucky not to concede a second goal before half-time. It was again a quick combination through the right halfspace initiated by Reus, but Thomas Delaney’s shot was blocked by Tah and Hakimi hit the crossbar.

Less tempo in the second half

The pace of the game in the first half was impressive and it was clear that both teams could not play like that for the entire game. Peter Bosz used the break to switch to a 4-2-3-1 formation. Amiri was subbed off for Bailey, Bellarabi moved to the right side and Havertz played as a number ten. However, the task became more complicated after Reus doubled the lead in the fiftieth minute. This came after a failed fullback-on-fullback press by Dortmund, leaving Leverkusen three-versus-three up front. However, Wendell made the wrong choice in possession, meaning Sancho was immediately launched in the space he had left behind. Classy stepover by Alcácer and a decent Reus finish meant Dortmund went two goals up.

After that, Dortmund switched to a medium block and were able to control the guest’s attacks. After changing the formation, Leverkusen did not use their three-at-the-back in the buildup phase anymore. Both fullbacks and wingers stayed wide, the center-backs were responsible for the buildup. They tried to find Charles Aránguiz and Baumgartlinger behind Dortmund’s strikers, but the host’s pressing was superb in the second half. Therefore, Leverkusen were guided to the wings, where Dortmund created a lot of turnovers. It was basically not possible for Leverkusen to play through the central zones. 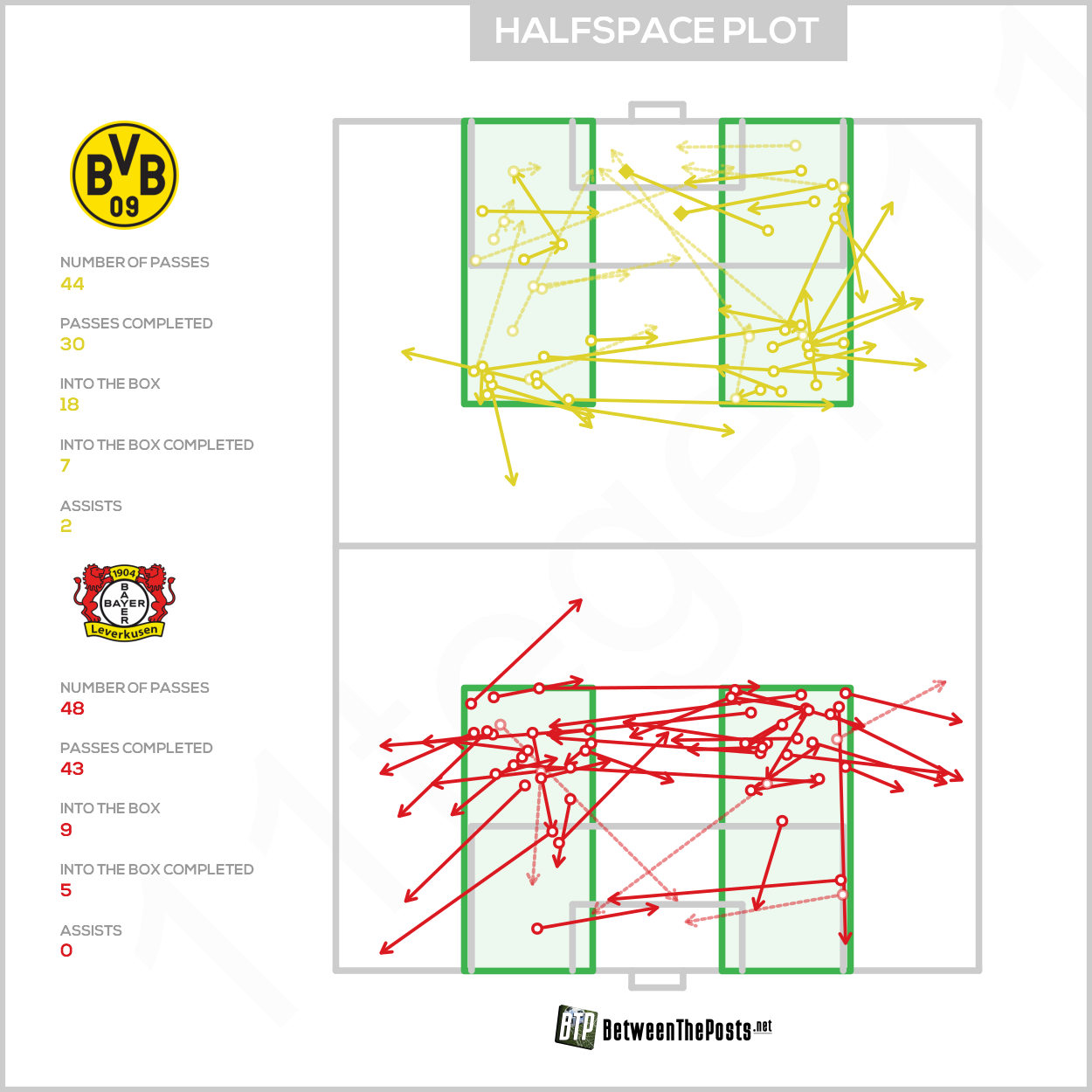 Leverkusen struggled to advance the ball into dangerous areas, with a lot of passes going to the wings. Dortmund’s more direct attacking approach created better chances.

After roughly sixty-five minutes, Leverkusen forced Dortmund into a low block altogether. This came with some risks for the hosts, as Leverkusen could use wingers Bellarabi and Bailey to carry the ball into the box and bring in crosses. However, Volland is not the type of striker that is able to win aerial duels against the likes of Mats Hummels and Manuel Akanji.

With time running up and Bosz seeing his team struggling to create chances, striker Lucas Alario was introduced for Aránguiz. This substitution also meant a formational change. Leverkusen now played in what can be called a 4-1-4-1 formation with Havertz and Volland as two very offensive central midfielders.

By being so open, Leverkusen took a lot of risk, which was ultimately punished by another counterattack from the hosts. Guerreiro escaped the counterpressing with a dribble and created a five-versus-three counterattack which he eventually finished off for the third goal. This goal decided the game and Dortmund were even able to score a fourth against a now seemingly frustrated Leverkusen side.

The quality of the first meeting between these two Champions League sides in this Bundesliga campaign was very high, with Dortmund coming out as the deserved winners. The shot map is something Lucien Favre will be happy to see, as his team was able to force their opponents into poor shot locations while creating many high value chances themselves. The team bounced back after the loss in Berlin before the international break and sits in second position with nine points after four games, one point behind league leaders Leipzig. 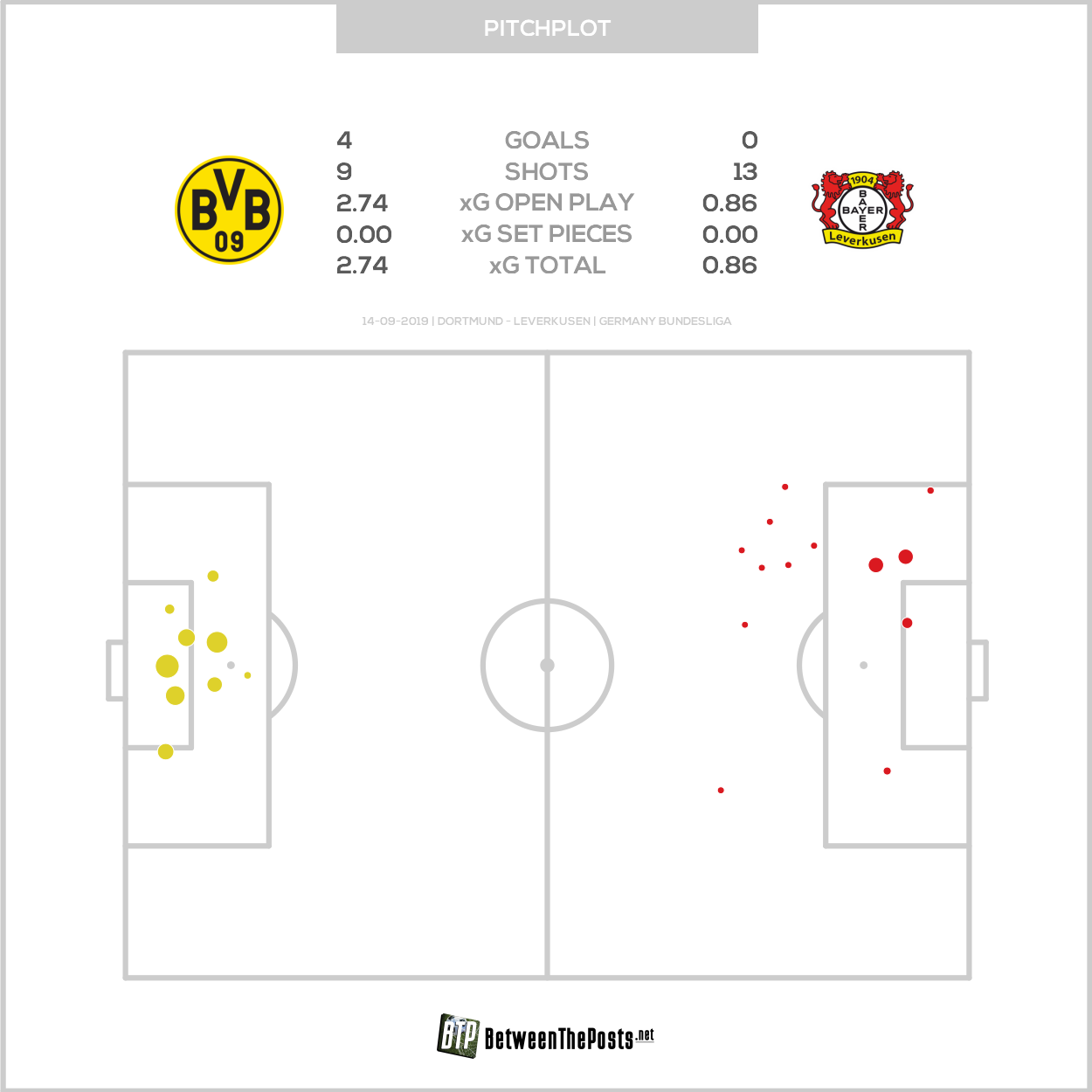 After starting with two wins, Leverkusen now failed to score a goal in the last two games. As it was against Hoffenheim, the team dominated possession but failed to create any meaningful chances. A lot of shots came from poor positions and, although Dortmund defended very well, this should not be the standard Leverkusen should be reaching for.

While the offense struggled to create chances, Leverkusen’s defense was exposed by Dortmund fast attacks more than once. The first, second and fourth goal resulted from similar mistakes. Leverkusen already won the ball or were able to force Dortmund to play back, but lost the compactness when pushing up.

These kinds of mistakes are not acceptable for a Champions League side and get punished if you give the likes of Reus and Sancho too much space. Leverkusen were undoubtedly one of the best sides after Bosz took over in January, but struggle currently to transfer last season’s form into this season. 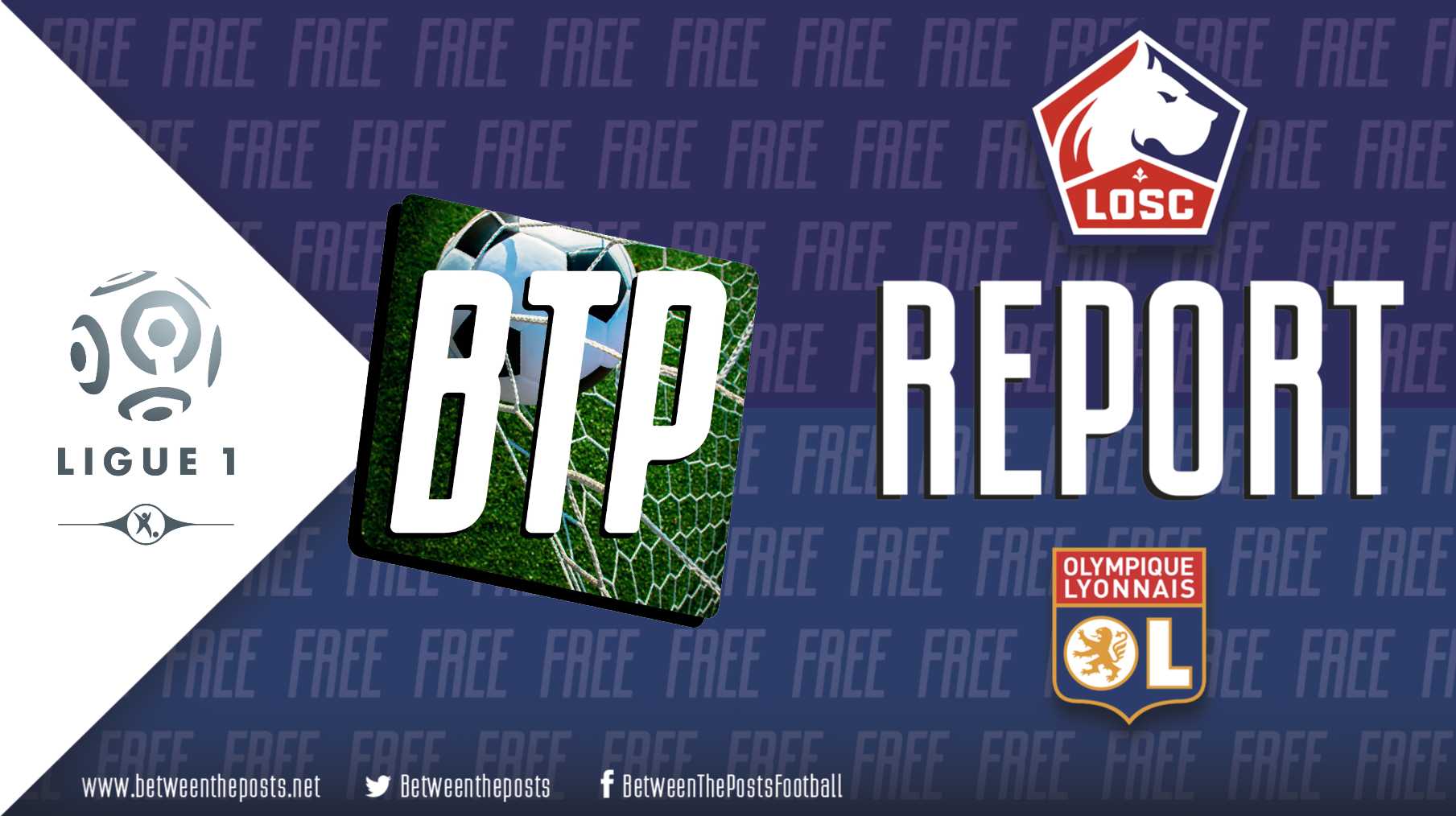 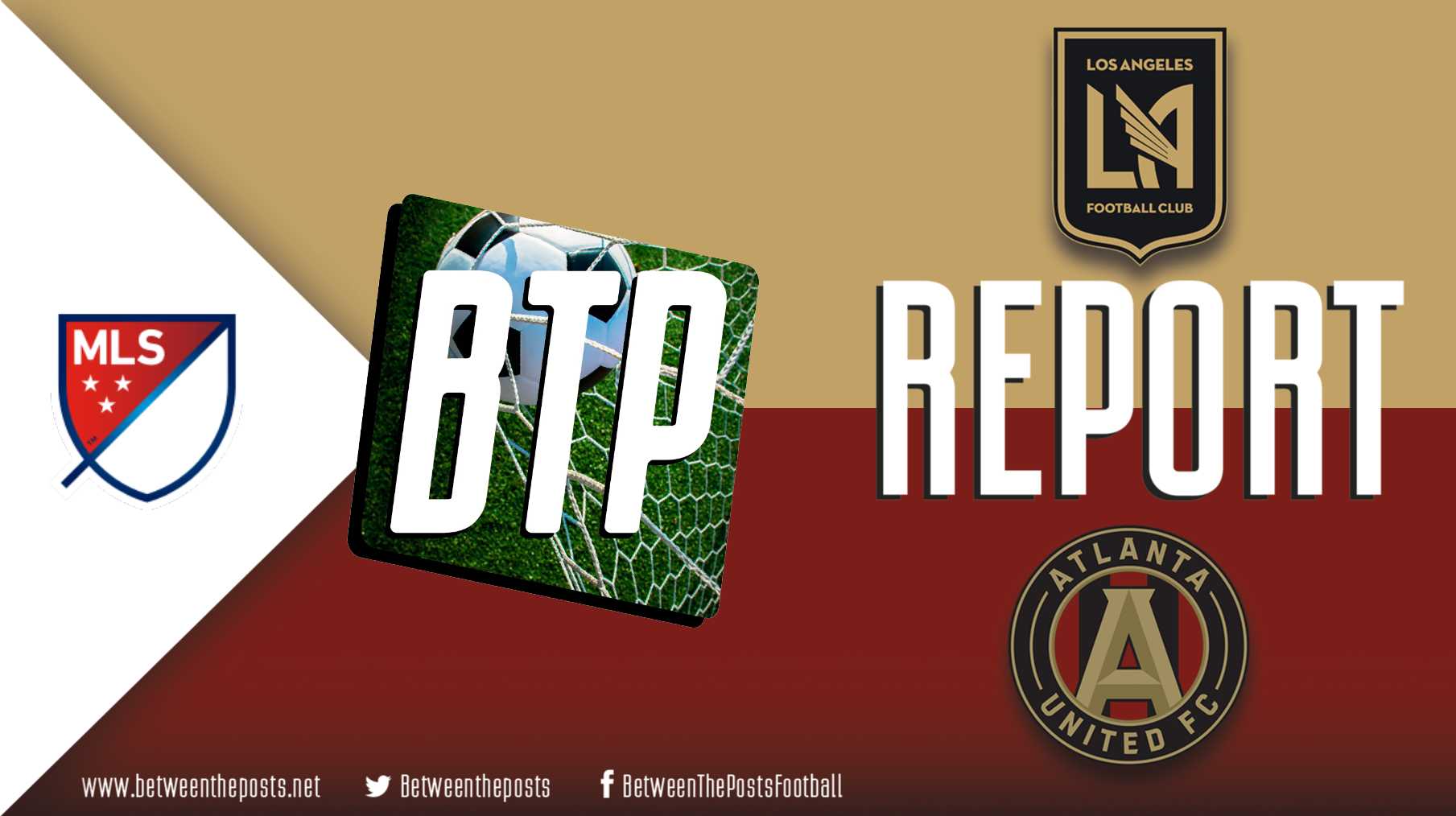