The best teams in the world think about attacking when they are defending, and think about defending when they are attacking. Bayern Munich failed to do the latter against Borussia Dortmund and offered too little defensive cover in transition from attack to defense. Bayern’s central defenders suffered badly, as Dortmund’s attackers feasted on space, and the home side eventually won this rollercoaster game.

This season’s Klassiker could very well be of one of the decisive matches in the Bundesliga title race, since Dortmund went into this match four points clear of Bayern. Manager Lucien Favre held onto his ever present 4-2-3-1 formation, but surprised in two positions. Julian Weigl made an unexpected start next to Axel Witsel in the double pivot 4-2-3-1 is one of the most frequently occurring formations in football. The two most defensive midfielders are called a ‘double pivot’. , while Mario Götze was fielded as the striker.

The last time Götze and Marco Reus were deployed as number nine and ten, it produced a wonderful game of football that Dortmund should have won. The second change was a forced one, with experienced goalkeeper Marwin Hitz replacing Roman Bürki.

Bayern Munich have played a mix of 4-2-3-1 and 4-3-3 formations all season long, varying the positioning of their midfielders on personnel at hand and the opponents’ playing style. Thiago Alcántara and James Rodríguez were unavailable, which meant Javi Martínez was deployed as the holding midfielder, paired with Leon Goretzka and Thomas Müller. Up front, Robert Lewandowski was leading the line, flanked by Franck Ribéry and Serge Gnabry, as Arjen Robben was injured as well.

Without Thiago and James, their midfield playmakers, Bayern’s plan to break Dortmund down was to focus on wing-play, quickly looking for fullbacks Joshua Kimmich and David Alaba who would then further distribute the ball.

Midfielders Müller and Goretzka would go deep and mix up their runs, sometimes showing for the ball but more frequently going in behind. This meant that wingers Ribéry and Gnabry had space to come inside between Dortmund’s defense and midfield. When the ball was on the wings, Bayern’s fullbacks would aggressively look for one of the four players behind Lewandowski, who had time and space to receive due to their excellent interchanging.

Bayern’s most common movement patterns in attack against Dortmund’s 4-4-1-1.

Dortmund’s sloppy in counterattack, so Bayern take the lead

Central defenders at Europe’s elite clubs nowadays are asked to play with a lot of space in behind. For Mats Hummels and Jérôme Boateng, this seems to be more problematic as time passes by.

Against Dortmund, they were not aided by their own team’s offensive plan. Bayern’s attacking strategy involved the fullbacks to act as playmakers deep on Dortmund’s half and the offensive midfielders were instructed to be on the end of those passes. This meant that Javi Martínez was often the only midfielder behind the ball when possession was lost.

It is quite remarkable Dortmund did not manage to create more shots from their counterattacking opportunities. This included two of Bayern’s corner kicks that were turned into direct counterattacks by Dortmund, wasted by Jadon Sancho and Götze.

In the tenth minute, Hummels horribly misjudged a headed ball from Boateng, which sent Reus through on Manuel Neuer. Dortmund’s captain produced a meek shot into the goalkeeper’s hands. In the fifteenth minute, Hummels stepped out of the defensive line while Boateng went backwards, which gave Dortmund all the space to produce another dangerous counterattack, only stopped by some very alert goalkeeping by Neuer, who denied Sancho a tap-in. In the twenty-third minute, Reus ignored that very same Sancho on the right-hand side, on Dortmund’s last dangerous counterattacking opportunity of the first half.

Bayern became more aggressive in their counterpress as the first half wore on, and took what felt like a deserved lead after twenty-six minutes. It came after two quick cross-field A pass from one side to the other. passes. These gave Gnabry a lot of time to pick out Lewandowski, 0-1 Bayern.

It is worth noting that after their opening goal, Bayern retreated a bit more and formed their own 4-4-2 formation out of possession. In the fifteen minutes before the half-time whistle, Dortmund pressed Bayern higher up the field, but could not create goal scoring chances. Bayern had one big chance after going up, for Ribėry, after another quick switch of play. 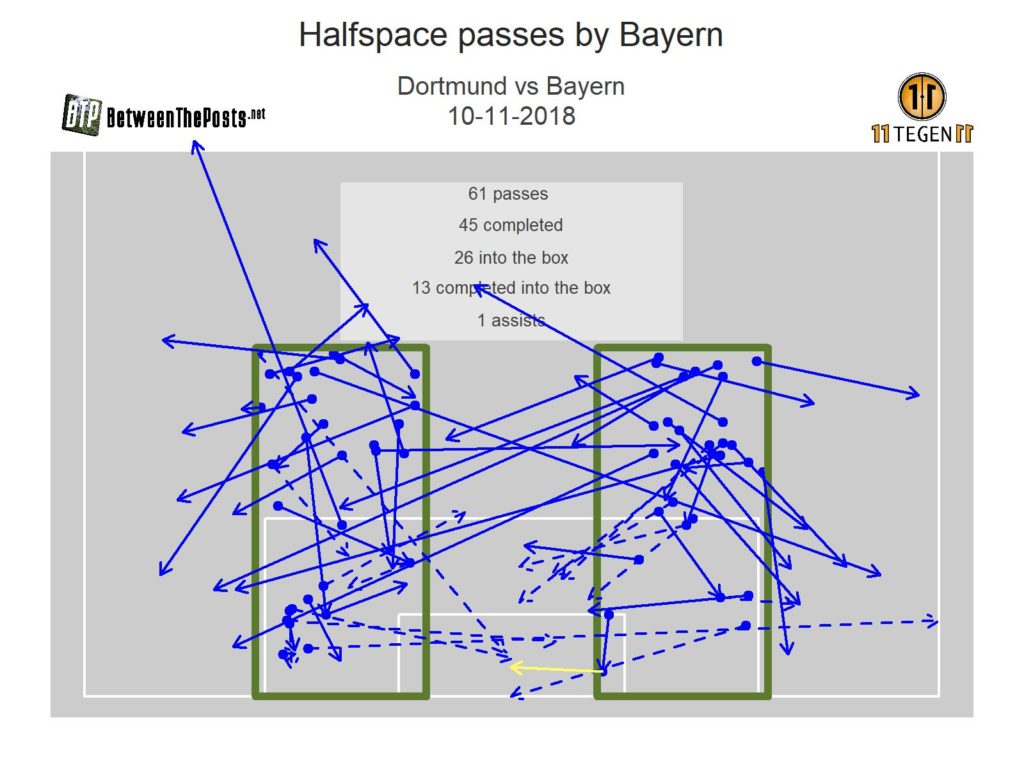 Rollercoaster ride starts in the second half

The disappointing Weigl was taken off by Favre and replaced by Mahmoud Dahoud. With Bayern leading at the break, it seemed like they intended to continue as they had done in the first half. Bayern’s 4-4-2 shape is not as rigid or compact as Dortmund’s, though. Only two minutes after half-time, Sancho completely ruined Bayern’s defensive structure by dribbling past two opponents on the right flank.

Subsequently Reus and Götze found themselves two-versus-two against Boateng and Hummels. Reus timed his run perfectly and was put through on goal by Sancho. A collision with Neuer ensued and the referee pointed to the spot. Reus converted it himself and just after the second half had started, the game was level.

This match was not dubbed ‘rollercoaster game’ for nothing in the title, though. Only three minutes later, Bayern struck back with a characteristic passing pattern, as the Müller – Kimmich – Gnabry triangle quickly interchanged positions again, Müller’s pass found Gnabry, who beautifully back-heeled it to Kimmich. The right back assisted Lewandowski, who scored his second goal of the night.

Only five minutes later, Reus missed a monster chance, as a cross from Sancho fell into his feet inside the six-yard box. He did manage to get the ball past Neuer, but his effort was blocked by Kimmich.

Just before the hour mark, the ineffective Götze was taken off for red-hot striker Paco Alcácer, whose first on-ball action was a miss in front of an open net, though. Sancho punished yet another Hummels error, as he took the ball from him and then badly outran Bayern’s central defender, rounded Neuer and calmly found Alcácer, who became the second Dortmund player to miss a chance from inside Bayern’s six-yard box in five minutes.

Dortmund’s equalizer was scored from a much harder chance than the ones that were missed. In the 67th minute an early cross by Piszczek was met by Reus on the half-volley and beautifully put away in the far corner. 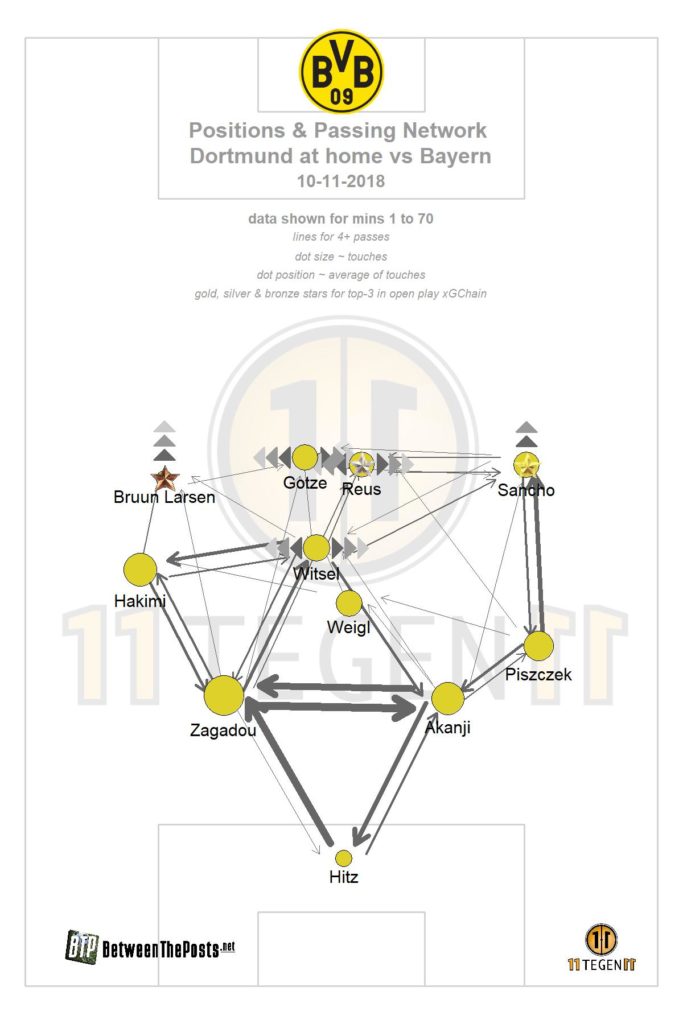 Bayern did not learn from the first half

One would expect a side like Bayern to alter their offensive positioning after it proved to be so vulnerable to counterattacks in the first half. They did not. Even with the score in their favor, the Bavarians kept pushing for more and kept their fullbacks high up the pitch, leaving the central defenders and Martínez exposed.

It made for a fascinating and free-flowing second half with plenty of space for both teams. But it also cost Bayern another goal. In the 72nd minute, Ribéry lost the ball near Dortmund’s penalty area (!). The home side were able to play out of pressure and Witsel played a fantastic through ball to Alcácer, who found himself in acres of space. He coolly approached Neuer and chipped the ball in the goal, seemingly effortless, and Dortmund were leading for the first time in the match.

In the last ten minutes, Kovač subbed on Sandro Wagner for Müller, making Bayern play more or less in a 4-2-4 formation to end the game, while Favre introduced Thomas Delaney for Bruun Larsen, which made Dortmund play in a 4-5-1 shape against the ball.

To add to all the drama this match had in store, a stoppage time equalizer by Lewandowski was cancelled due to a – correct – offside decision. After that, Bayern did not come closing to scoring again and Dortmund took the three points. 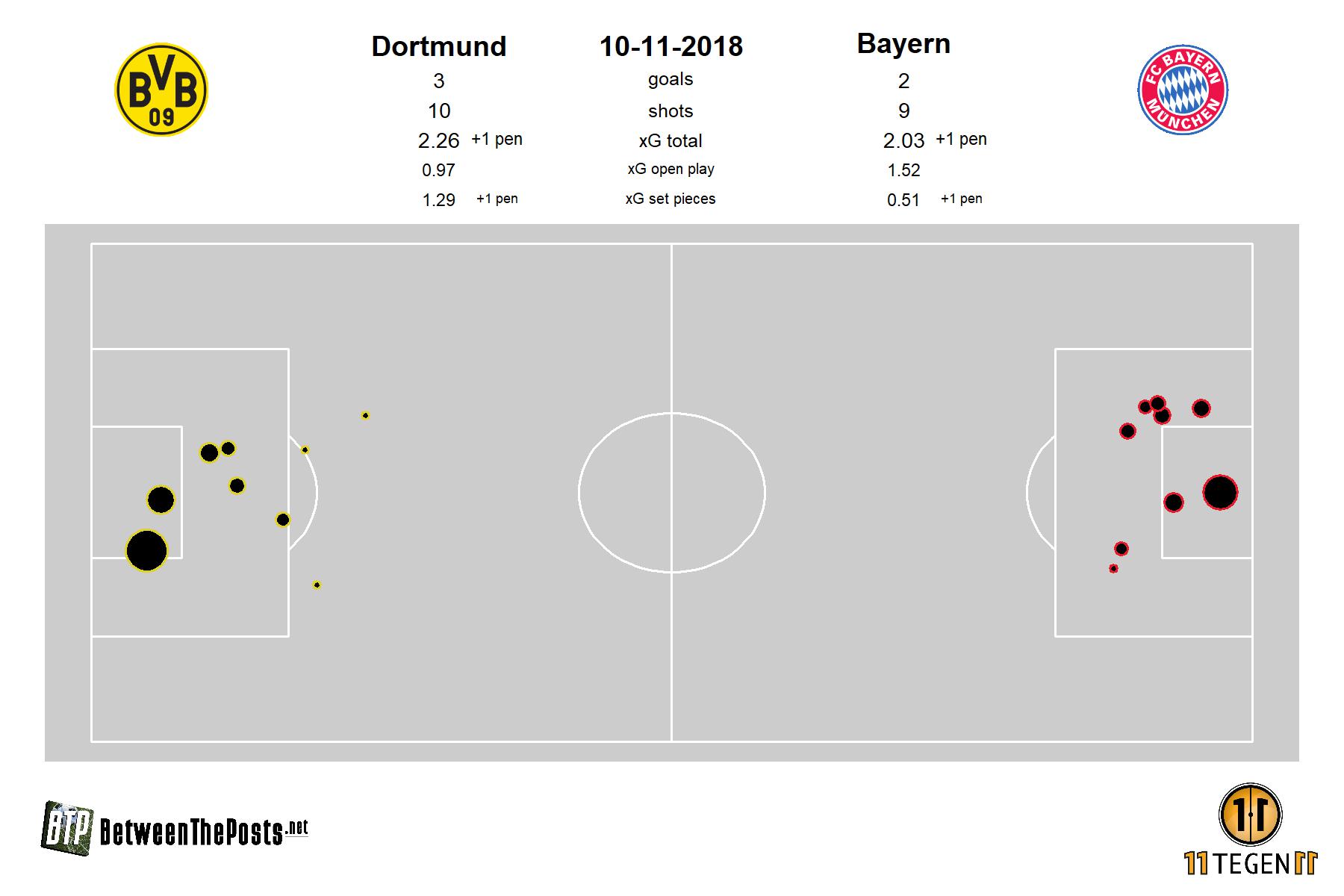 Dortmund’s win extended their lead over Bayern to seven points. The fact that most people see this as being beneficial for the suspense in this year’s title race speaks volumes about Bayern’s Bundesliga dominance. Seven points is a serious gap though, and the way Dortmund have played in recent weeks suggest they might contend for the title until deep in this season.

Bayern’s offense looks fine, except from conversion numbers. The main thing Bayern’s manager Niko Kovač has to fix – if he gets the time from Bayern’s board – are the problems his team experiences when transitioning from attack to defense. It is questionable whether Hummels and Boateng is still a functioning duo at the elite level, and even though Alaba and Kimmich are great offensive weapons, playing them as de facto wingers at the same time may not be possible any more.

In that sense, Bayern’s problems are a microcosm of Germany’s World Cup failure, with ageing center-backs finding insufficient cover from a single holding midfielder, while both fullbacks venture forward to provide the team’s offensive input. It could be that the return of midfield strongholder Thiago is enough to fix things, or perhaps it is time for Niko Kovač to take a leaf out of Joachim Low’s Nations League book and look for a shift in formation that aims to restore the balance in the team. 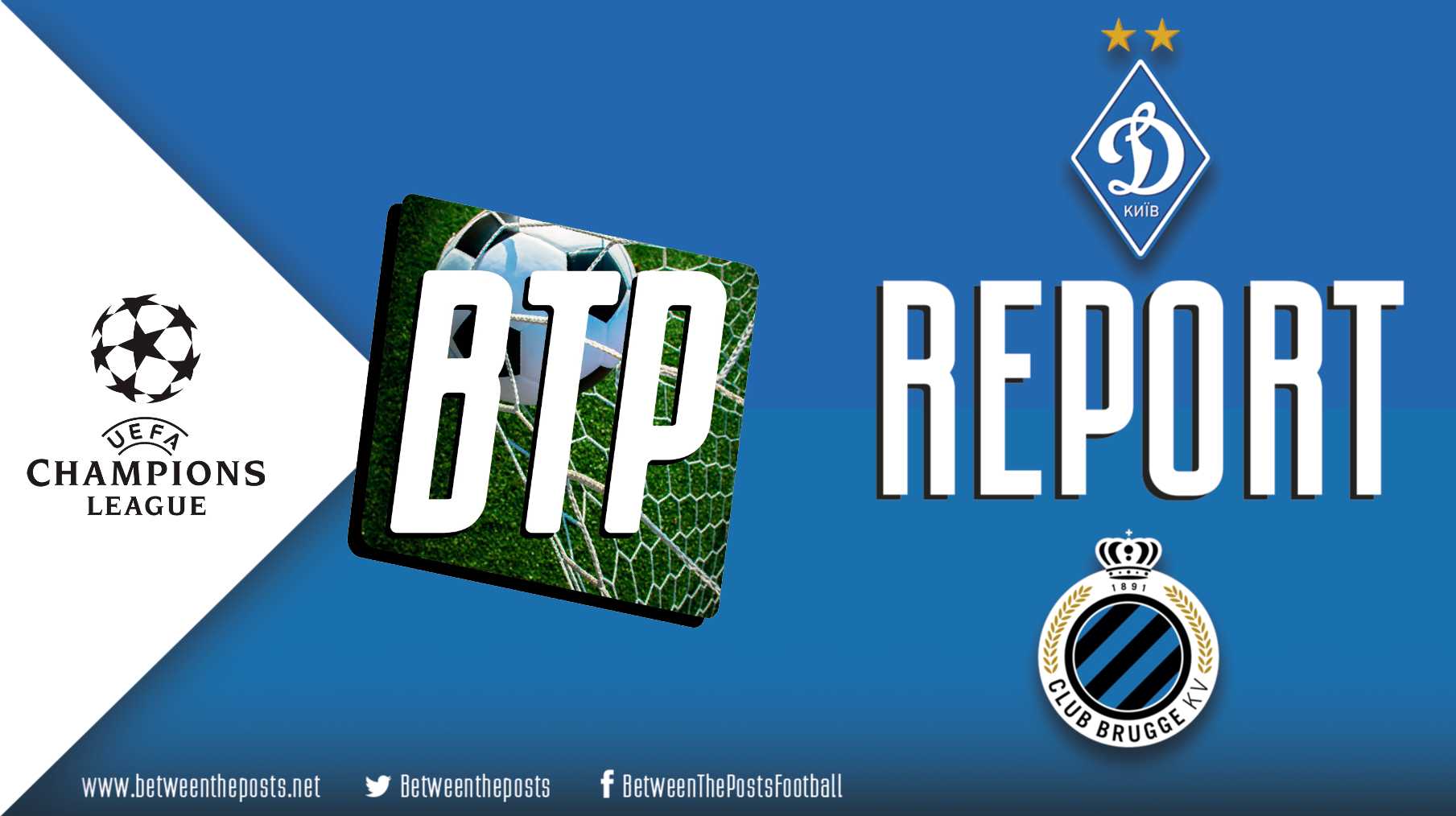