An audacious chip from Joshua Kimmich was all that separated the Bundesliga’s top two in this crucial match. Dortmund showed promise early on finding space in wide areas, but were soon stifled by Bayern’s strong counterpressing and transition game.

Borussia Dortmund marked the return to Bundesliga action last week with a resounding 4-0 win over Schalke 04. At the weekend, Lucien Favre passed a potentially tough test, as Dortmund claimed a victory away at VfL Wolfsburg. Now came the biggest test of all though, as they hosted league leaders Bayern Munich. With a win Dortmund could have closed the gap between the teams to just one point at the top of the table.

Bayern recorded a win in their first game back as they beat Union Berlin, but looked rusty while doing so. They then found their goalscoring form at home versus Eintracht Frankfurt on Saturday, but still suffered a second half wobble in which they conceded twice in quick succession. Bayern never really seemed likely to drop points in either game, but Hansi Flick surely hoped that his team would showcase their previous high level of football for the trip to Dortmund.

Favre named the same lineup as he did in the win over Schalke. This meant that Jadon Sancho once again started on the bench, while Julian Brandt and Thorgan Hazard supported Erling Braut Håland as the striker in their 3-4-3 shape. There was also a start once again for Mahmoud Dahoud in midfield alongside Thomas Delaney.

Bayern meanwhile made one change from the weekend’s win against Frankfurt as Serge Gnabry returned to the lineup ahead of Ivan Perišić. Thiago Alcantara was still unavailable, so Leon Goretzka continued to partner Joshua Kimmich in central midfield within Bayern’s 4-2-3-1 system. 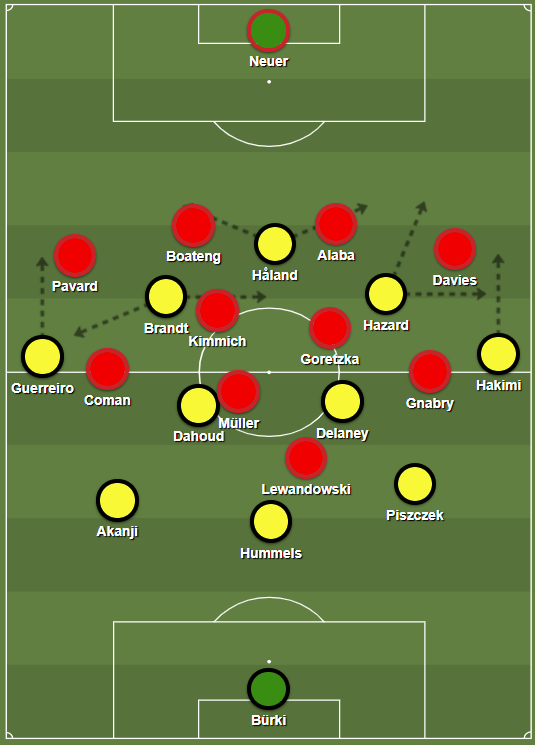 Dortmund starting out in a 3-4-3 shape while in possession.

Dortmund make use of switches

The game started with Dortmund playing in a fairly authoritative manner when they had possession. They looked relatively confident in circulating the ball against Bayern’s 4-4-2 medium block. A medium block refers to a team that retreats in their own half out of possession, generally only disrupting their opponents some way into their own half.

Dortmund were structured as they usually are in their 3-4-3 formation, with the wing-backs providing width initially, but also occasionally having the freedom to rotate positions with Brandt and Hazard. Håland provided runs into the channels, and Dahoud joined the attack with occasional bursts ahead of his central midfield partner Delaney.

The width provided by the wing-backs was key to their attacking efforts in this early part of the game. They were often able to find Achraf Hakimi or Raphaël Guerreiro through switches of play. This could happen by attracting Bayern to one side with shorter passes before switching to the other side, or by finding one of the three center-backs left open against Bayern’s front two, who could then play a long diagonal towards one of the wing-backs.

From the space they found on the wings, they were occasionally able to find the gaps between Bayern’s defense and midfield with flat passes back inside, into the feet of Brandt and Hazard. Bayern also seemed to have a willingness to hold a high defensive line, which resulted in Dortmund looking for runs in behind, especially from the likes of Håland and Hazard moving into the channels. Though upon reaching the final third The one-third of the pitch that is closest to the opposition’s goal. , Dortmund were never really able to find the quality needed in order to create high quality scoring chances.

Bayern grow into the game

Bayern did not stay on the back foot for too long. Although their possession game was at times not quite as fluid as one might expect, they were still able to establish themselves by acting strongly in transition moments.

The absence of Thiago was felt somewhat in Bayern’s buildup phase. Kimmich was usually the deepest midfielder and would shift interchangeably between playing alongside Goretzka and dropping into a back three alongside Boateng and Alaba. 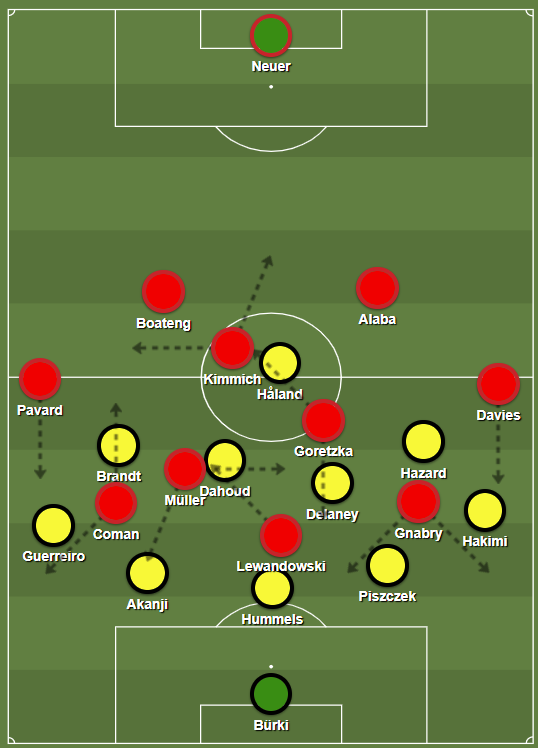 Bayern moved up quickly and pressed heavily forward in possession.

Goretzka, a very good box-to-box midfielder, often stood in the number six zone. However, he does not possess quite the same skill set in deep areas as Thiago. The creative playmaking presence and constant connections offered by Thiago in the number six zone and left halfspace If you divide the field in five vertical lanes, the halfspaces are the lanes that are not on the wing and not in the center. Because there is no touchline like on the wing, players have the freedom to go everywhere. But this zone often is not as well-defended as the very center. This makes it a very valuable offensive zone to play in and a lot of chances are created by passes or dribbles from the halfspace. was missed, as was his synergy with Kimmich, which forms the nucleus of Bayern’s buildup.

Although Bayern’s buildup from the first and second line was not quite as fluid as it could be, they still managed to create the occasional opening. They seemed to play a lot through the right side, where Müller and Coman could be found interchangeably in the right halfspace. Lewandowski also drifted over to this side, and Pavard of course could be found overlapping from right back.

In the defensive transitioning moments Bayern were the strongest. The central midfielders and fullbacks could get engaged high up the pitch in counterpressing to help stifle potential Dortmund counters. Håland could cut an isolated figure for certain spells, and even when Dortmund could break out, Bayern’s defense has recovery speed, especially on the left with Alaba and the outstanding Alphonso Davies.

Bayern may not have sparkled in possession, but they did have the one brilliant moment of quality that ultimately decided the game: Kimmich’s wonderful chip. Shortly before half time, the ball broke to the German on the edge of the box, who smartly chipped the ball over the head of Roman Bürki, who arguably went with the wrong hand in trying to save the shot. Regardless, the ball ended up in the far corner of the net, and Bayern were 1-0 up. 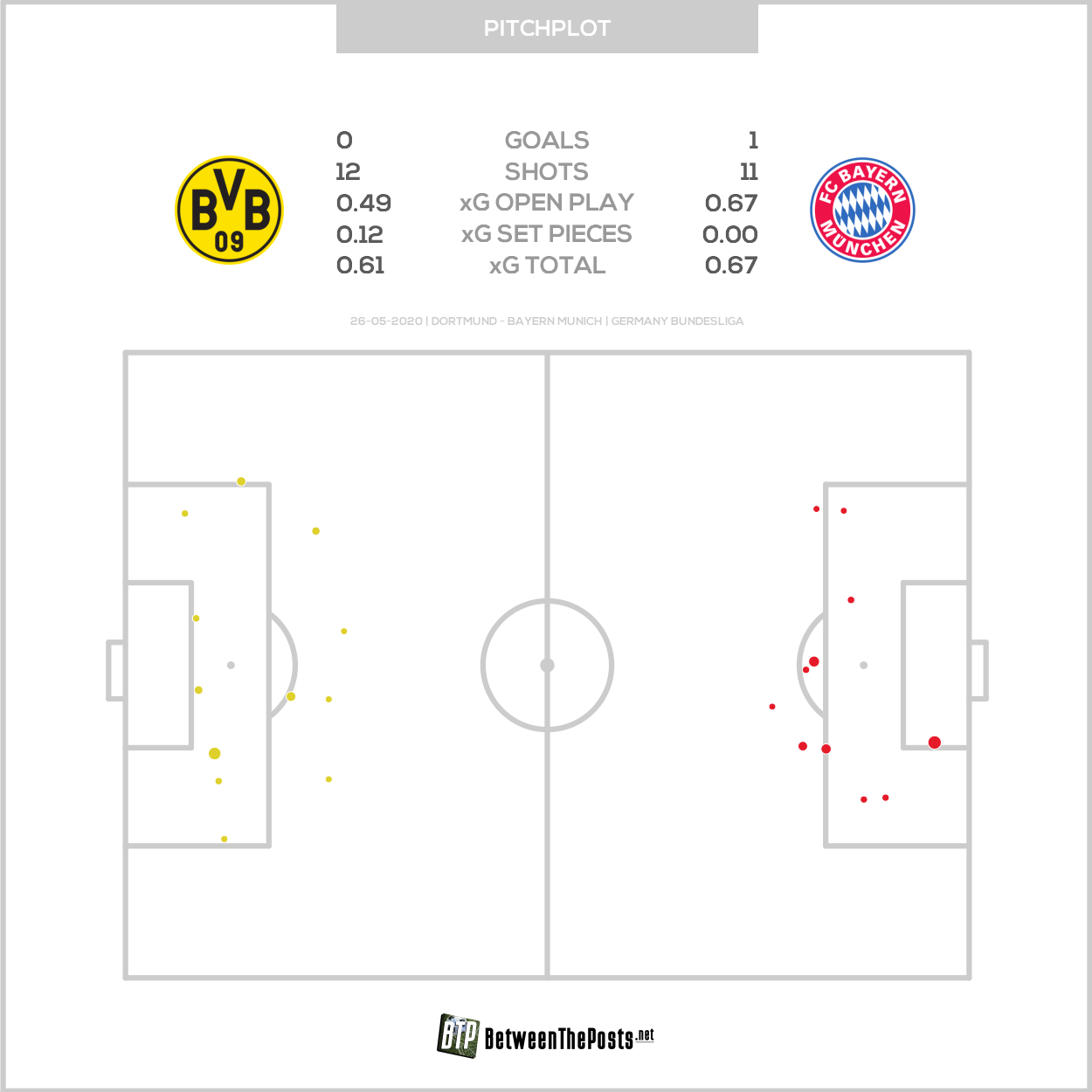 Both teams could not manage to create many high quality scoring chances.

Bayern does not stop

Taking the lead just before half time did not seem to cause Bayern’s intensity to waver at all. In fact, it seemed to increase it. In the second half, Bayern’s pressing was arguably even stronger than in the first, especially in the early stages.

They shifted well and pressured the ball high up. At the same time though, once the press was beaten, there seemed to be a bit more restraint in terms of the high defensive line, which now dropped off slightly earlier.

In terms of dealing with Dortmund’s own press, Bayern were unafraid to be direct where necessary with chipped passes into the frontline. Dortmund would usually push one of the central midfielders out in higher pressing to pick up Kimmich in the number six zone for Bayern, so there was a slightly weaker presence in front of the Dortmund defensive line, which Bayern could try to exploit.

Favre had been relatively bold at half time, taking off Brandt in favour of Sancho, as well as introducing Emre Can in place of Delaney. At first, Sancho did not have the game changing impact that Favre would have hoped for, although he did grow into the game a bit later on. Nevertheless, the choice of Brandt as the player brought off, while being 0-1 down, may raise some eyebrows, as he is such a key player in knitting Dortmund’s possession sequences together and helping to create breakthroughs.

There was more bad news for Dortmund; Håland limped off, having to be replaced by Giovanni Reyna, which meant that Hazard moved into the center of Dortmund’s forward line with Reyna and Sancho supporting.

Bayern began to sit a little bit deeper going into the final stages. They were largely successful in blunting Dortmund’s attack, who mustered three shots in the final twenty minutes. Eventually Favre switched to a 4-4-2 system, bringing on Mario Götze for Łukasz Piszczek. Götze joined Hazard up front, while Axel Witsel was also introduced into the midfield line in place of Dahoud.

Bayern made their own substitutes with Perišić, Lucas Hernandez and Javi Martinez making appearances. They switched to a 4-5-1 formation in the final minutes with Martinez joining Goretzka and Kimmich in midfield, plus Müller and Perišić on the wings. Bayern eventually saw the game out with a 0-1 win.

Dortmund started somewhat brightly with their use of switches of play, but soon got stifled by the Bayern counterpress. Assuming it was a tactical decision, bringing Brandt off at half time was questionable, and his replacement struggled to integrate quickly. Going forward, the potential injury to Håland is worrying, although its impact is lessened by the fact that the title race is somewhat decided in favor of Bayern Munich.

For Bayern, the victory puts them even more firmly in control at the top of the table. Although their possession game was not always perfect as they lacked the influential Thiago, their pressing and transition moments were strong, and they had the decisive moment of quality when it mattered, courtesy of Joshua Kimmich. 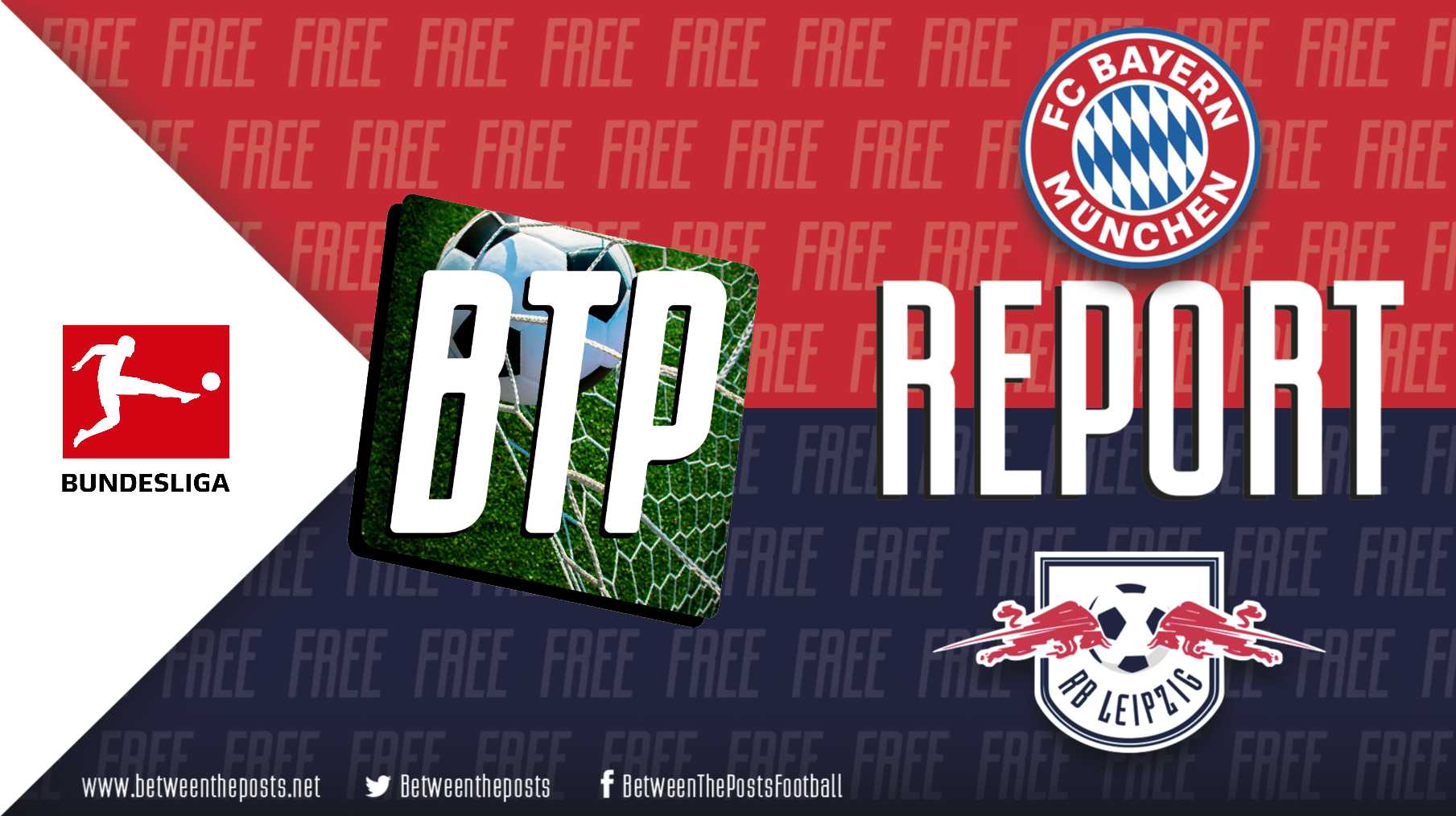