Gladbach started with high pressing right from the start of the match, but Bayern comfortably outplayed it time after time. The champions were unfortunate not to lead at half-time, but scored their opening goal just after the game restarted. Rose’s adjustment after roughly sixty minutes resulted in a more open game that went Gladbach’s way in the end, as Bayern will rue all of their missed chances.

League leaders Gladbach welcomed champions Bayern in this week’s top-clash in Germany. After a mediocre start to the season, Marco Rose’s side found its flow during last month, impressing with a quick transitional game. With nine wins out of the last eleven league matches, Gladbach now have been sitting in the first position for some time, meaning this counted as a huge match.

Bayern’s poor form this season resulted in Niko Kovač’s sacking, but the champions seemed to have found their form back after Hansi Flick took over, winning his first four matches in charge without conceding a goal. Last week’s loss against Bayer Leverkusen was unfortunate, but Leverkusen’s counterattacking approach showed the way to beat Bayern.

After the 4-2-3-1 shape was Rose’s formation of choice in the past couple of weeks, he returned to the 4-3-1-2 diamond shape that was used mostly in the beginning of the season. Therefore, winger Patrick Herrmann had to take place on the bench and captain Lars Stindl returned to the lineup. In addition to that, Matthias Ginter came back from injury and started at the center-back position.

Hansi Flick sticked to the 4-1-4-1 formation he used in the previous matches, but made a couple of changes to the lineup. Joshua Kimmich switched from defensive midfielder to right back, meaning Thiago started just in front of the defenders as the lone six. With Thomas Müller and Kingsley Coman starting on the wings, Serge Gnabry and Ivan Perišić were removed from the first eleven.

Both teams press high, but only Bayern are comfortable with it

With the 4-3-1-2 diamond shape, Gladbach had a lot of players in the center and guided Bayern’s buildup to the wings. Jonas Hofmann and László Bénes were asked to move up and pressure the fullbacks, while the striker would cut off the passing lane to the center-back. Stindl stayed close to Thiago to prevent passes to the defensive midfielder. At times, this was a good strategy and Gladbach were able to force Bayern to play long balls, but Bayern also showed clever movements to outplay this high pressing.

One of Leon Goretzka and Corentin Tolisso dropped back to support Thiago and create a superiority against Stindl. Through that, Bayern were able to attract Gladbach to one side to then switch the game over to the ball-far fullback. Often, Bayern started on the right side and were able to use Alphono Davies’ ability to dribble past Bénes to progress the ball forward. These kind of buildup tactics resulted in early chances for Müller and Robert Lewandowksi.

To prevent Gladbach from building up, Flick instructed his team to press high as well. In midfield, Tolisso, Goretzka and Thiago played man-oriented against Gladbach’s three central midfielders. In the first line, either Lewandowski pressured the center-backs or the winger moved up while closing the passing lane to the fullback. Both possibilities resulted in long balls and Bayern recovered the ball, preventing Gladbach to bring their quick attacking combinations into the game. 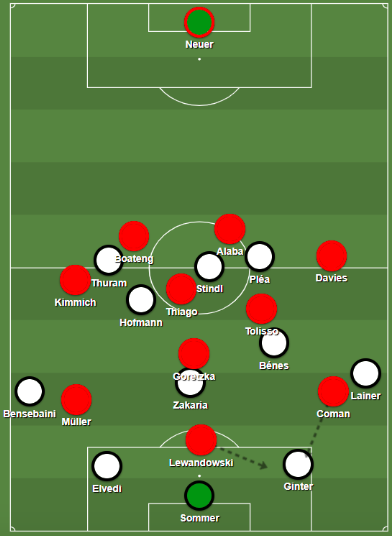 With the man-oriented midfielders, Bayern prevented Gladbach from playing out of the back. Either Lewandowski or a winger pressured the center-back.

Rose’s first adjustment repairs one problem, but creates another

After thirty minutes, Bayern outshot Gladbach nine to one, leading to Rose’s first adjustment. He switched back to a 4-2-3-1 formation with Alassane Pléa and Marcus Thuram on the wings. Against this new formation, Bayern’s fullbacks did not have as much space as before, but the 4-4-2 defensive shape did mean Gladbach now had one player less in the center of the pitch. Bayern occupied these spaces either through Lewandowski or Müller dropping back to receive the ball. The ball was played to the wingers afterwards. However, these attacks only resulted in a lot of crosses that were easy to defend for Gladbach’s defenders.

Therefore, Bayern went into halftime, outshooting their opponents thirteen (!) to one. They were a bit unfortunate to not lead at this point, but also failed to create clear cut scoring chances, often shooting from poor locations. The first half also underlined Bayern’s current strengths and weaknesses. After playing through Gladbach’s press, they advanced the ball forward quickly and created chances. But after Gladbach dropped back to a medium block A medium block refers to a team that retreats in their own half out of possession, generally only disrupting their opponents some way into their own half. in their 4-4-2 shape, Bayern resorted to crosses and long shots.

However, Gladbach did not want to remain in a medium block for the entire match, and once again tried to pressure Bayern’s buildup high up the field in the second half. While Stindl and Bénes closed the center and prevented passes into Thiago, Pléa and Thuram tried to pressure Bayern’s centerbacks. With four players pressing high, the two remaining central midfielders had a lot of space to cover, which Bayern exploited in their goal after 49 minutes.

Müller received a ball in the right halfspace If you divide the field in five vertical lanes, the halfspaces are the lanes that are not on the wing and not in the center. Because there is no touchline like on the wing, players have the freedom to go everywhere. But this zone often is not as well-defended as the very center. This makes it a very valuable offensive zone to play in and a lot of chances are created by passes or dribbles from the halfspace. and was able to attract Denis Zakaria. The Swiss international was outplayed through a one-two with Coman and Bayern switched the ball to left winger Perišić. After carrying the ball into the box, the Croatian scored after a quick one-two combination with Müller. Gladbach’s idea to press high played right into Bayern’s hand and was eventually punished.

Roses’s second adjustment brings an advantage for his side

Now trailing, Gladbach did not have the luxury to sit in a medium or low block and wait for counterattacks. For his second adjustment, Rose did not change the formation, but only the roles of wingers Pléa and Thuram. They positioned themselves narrower, preventing passes through the halfspaces and forcing Bayern to play the ball into the fullbacks. Gladbach were able to force more long balls from Bayern which resulted in a more open game and a lot of counterattacking situations.

The introduction of Breel Embolo was vital in this phase of the match, as the striker made many good runs to pressure the center-backs and also helped his team with his movement in counterattacking situations. One of these situations resulted in a corner kick, that led to a fortunate goal through Gladbach defender Ramy Bensebaini. Tie game after an hour of play. 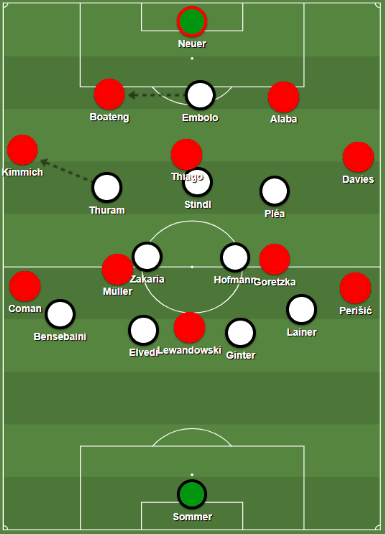 The narrow positions of Thuram and Pléa prevented Bayern from playing out of the back. After pressuring the fullbacks, Gladbach were able to control the long balls.

Rose’s side now dominated the match, but failed to create scoring chances. However, through their pressing they were able to keep Bayern away from their own box, holding their opponents down to only three shots in the entire second half. However, Gladbach only produced six shots as well, leading to the impression that this game would end without any team taking all three points.

Gladbach’s intensity against the ball decreased in the last ten minutes, but they still seemed to be the quicker and more dangerous side. Eventually, one of their many counterattacking situations in the second half led to Javi Martínez fouling Thuram inside the box. Bayern’s center-back, who was substituted because Jérôme Boateng was at risk to see his second yellow card, saw the second yellow card himself and was dismissed from the match. Ramy Bensebaini eventually scored the due penalty to win his team the match and keep his team in first position. 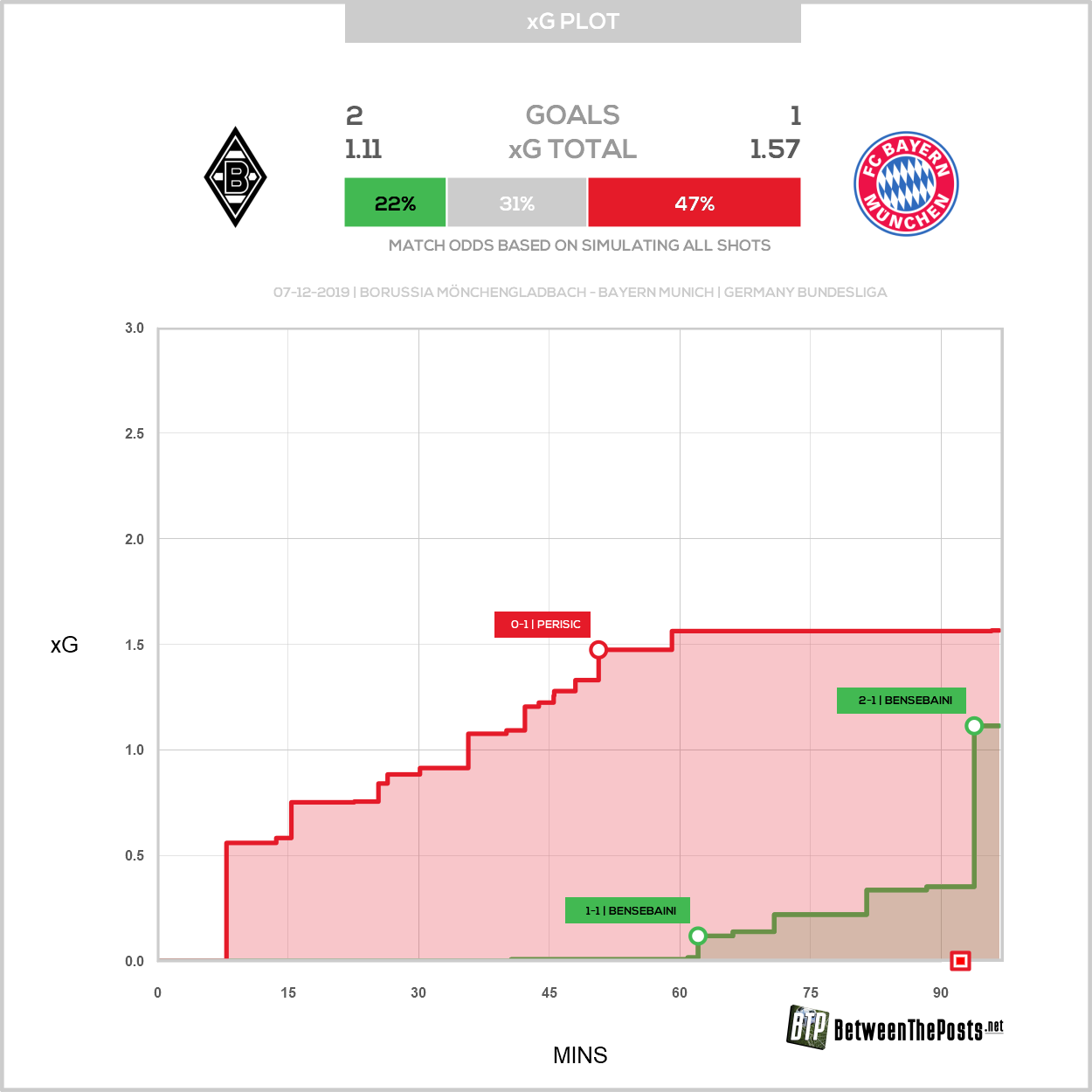 Borussia Mönchengladbach were ambitious with their high pressing, which did not pay off in the first sixty minutes. Although not playing poorly, some of their minor tactical problems were exploited by Bayern’s good individual quality. However, Rose’s desire to stick to his high pressing approach needed two adjustments to work. All in all, Gladbach were fortunate to win the match between the league leaders and current champions, as they barely created any dangerous situations.

On the other side, the second loss in a row means a first setback for Hansi Flick at Bayern Munich. His team dominated the first half, but did not create as many good chances as the shot count may suggest. Without impressing, Bayern showed good attacks against Gladbach’s high pressing in the first sixty minutes, but were not able to answer Rose’s second adjustment.

While Bayern’s pressing worked well, the team still relies a lot on crosses against a deep block and fails to create big scoring chances. The champions now drop back into seventh position, being seven points behind Gladbach. 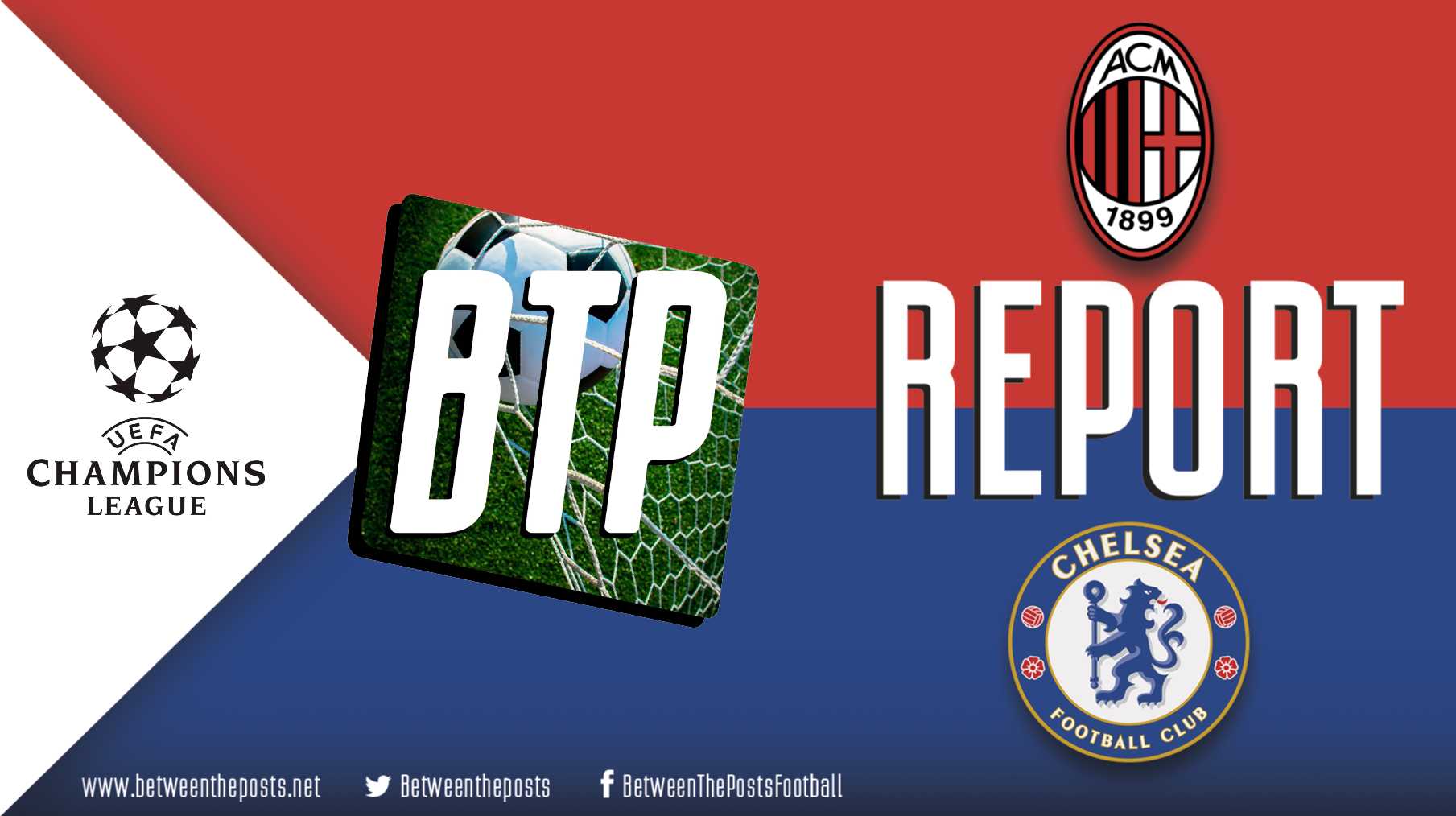 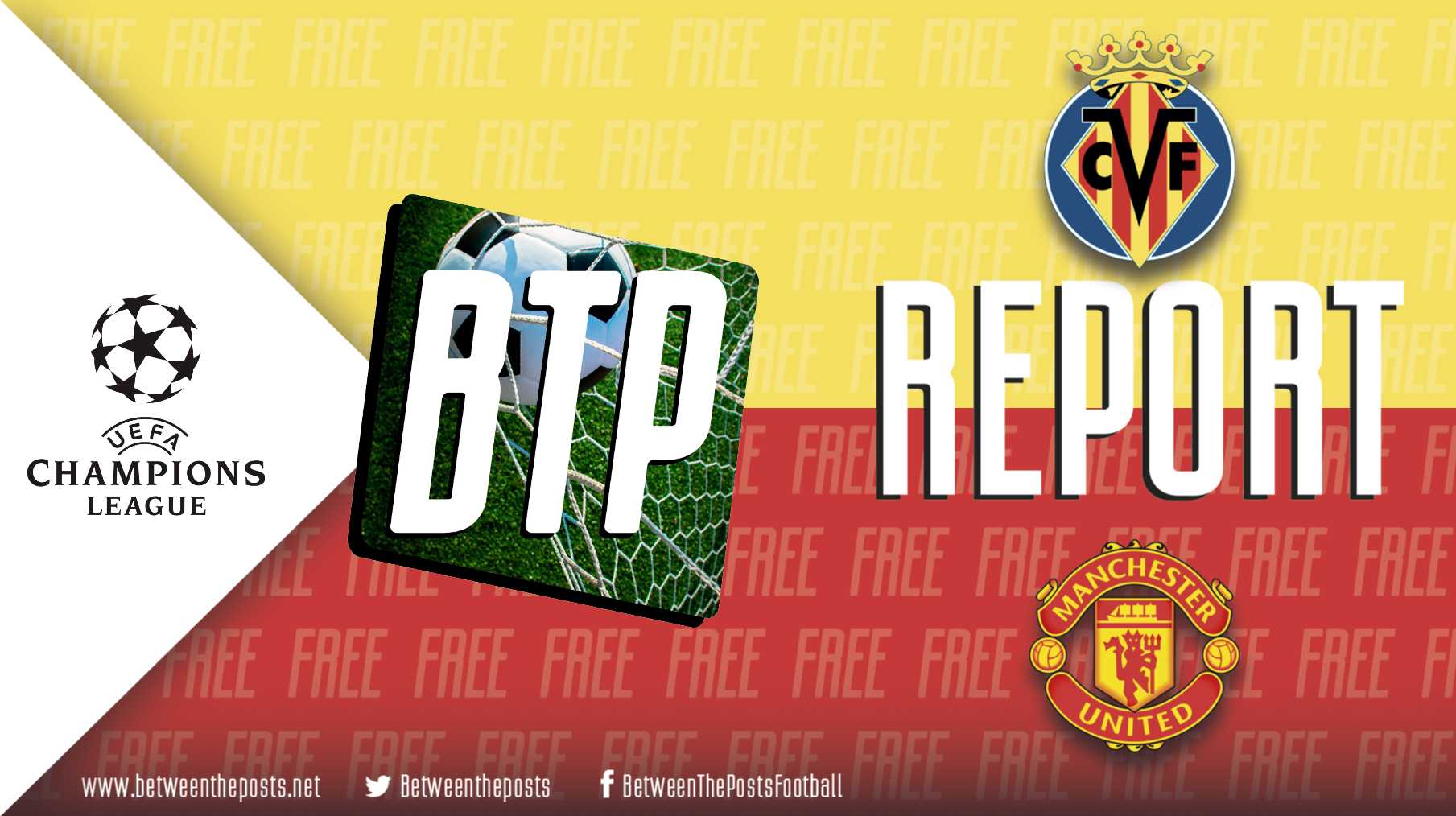