The opening night of the Bundesliga saw Julian Nagelsmann make his debut as the Bayern Munich manager, but the coach would have left Borussia Park wishing that he had come up against a different goalkeeper, as Yann Sommer decided to put on a show for the home crowd, making a string of ridiculous saves that maintained parity between the sides.

The managerial merry-go-round and a champion in flux have contrived to place this year’s Bundesliga race as the most interesting edition in recent seasons. While Bayern Munich remain favourites to win a tenth consecutive title, the acclimation period required by new coach Julian Nagelsmann could lead to friction that a team can exploit.

Of those capable of acting on these fine margins, the clear frontrunners include Marco Rose’ Borussia Dortmund and Jesse Marsch’s RB Leipzig. However, Adi Hütter’s Borussia Mönchengladbach might yet emerge as surprise disruptors of the top four, and they had the opportunity to display their talent after being picked for taking the first shot against the mighty outfit from Bavaria.

Playing in front of a raucous and welcome crowd at Borussia-Park, Hütter lined his team in a 4-2-3-1 shape. Stalwart goalkeeper Yann Sommer was protected by a defense of Joseph Scally, Nico Elvedi, Matthias Ginter and Stefan Lainer, with Florian Neuhaus and Christoph Kramer forming the double pivot. Two central midfielders next to each other. Alassane Pléa led the line and was supported by Patrick Herrmann and Hannes Wolf, with Lars Stindl taking up his usual number ten role.

An injury crisis at right back saw Nagelsmann hand Josip Stanišić an opportunity at the position, but the rest of the team bore a familiar look in the 4-2-3-1 shape. Dayot Upamecano and Niklas Süle formed the center-back partnership, with Alphonso Davies taking up the left back role. Joshua Kimmich and Leon Goretzka were the double pivot, with Robert Lewandowski receiving support from Serge Gnabry, Leroy Sané and the evergreen Thomas Müller.

The reason behind the excitement at Nagelsmann’s switch to Bayern was the success of the coach’s principles at his previous stops. What ideas would he carry over, and how would the champions adjust after two seasons of sustained excellence under Hansi Flick? Indeed, how much would Nagelsmann actually change, and how much did he need to? The answers to these questions would be revealed over the course of the season, but an early guess based on the game would indicate an emphasis on diagonality, dynamic overloads When one team has more players in a certain area or zone than the other team. and a rest defense A team’s defensive organization at the moment that the ball is lost to the opponent. anchored by Upamecano.

The opening minutes saw an unaggressive Bayern, with Gladbach jumping on the opportunity to capitalize. From the outset, they pressed the center-backs well, with Stindl covering the lane into Kimmich and forcing Bayern to play to the fullbacks. This was a repeated occurrence when the ball was deep in Bayern’s half, but Gladbach flattened into a 4-4-2 shape if the visitors crossed the halfway line.

This shape was a double-edged sword – it was helpful since the wingers had access to the fullbacks and could jump out to press them, but more importantly, since it offered strong coverage of the center where Kimmich could be denied possession. On the other hand, Stanišić remaining deep occasionally gave Bayern a three-man defense, where quick lateral circulation allowed Süle to carry into the Gladbach half before spraying it out wide to Davies. 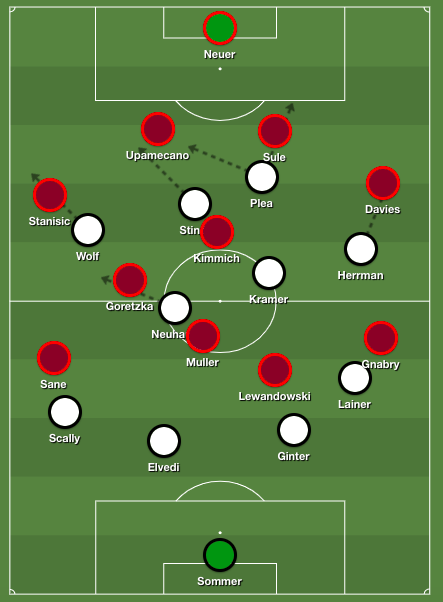 However, Gladbach were the stronger side in the opening sequences, as the pressing game honed under Marco Rose became a key factor. Bayern players were repeatedly pushed on to their weaker foot and angles were constricted, while double teams were sent at Davies to force him to lose control of the ball.

A defensive error early on saw Herrmann slide the ball into the path of Pléa, who finished after Stindl held Upamecano’s attention in the process. Having scored a goal after ten minutes, Gladbach shifted to the 4-4-2 shape, surrendering possession but remaining aggressive in midfield. Still, they remained dangerous in transition, with Pléa and Stindl forming a strong duo against Bayern’s weak rest defense structure.

Bayern takes control of the game

Bayern began gaining strength after conceding, since Kimmich and Goretzka began moving between the first and second lines more fluidly. Previously, Kimmich was stationed behind the first line and could not be accessed, which meant the fullbacks had to figure out the progression. This was achieved more easily on the left, with Gnabry occasionally dropping deep to interact with Davies before charging up the halfspace for the reverse pass. On the right, Sané more often than not ran into a wall, though he had a couple of nice interchanges with Müller and an overlapping When a wide player, most of the times a wing-back, runs outside to fill in the space left by a winger going inside with or without the ball, this is called overlapping. Stanišić.

Despite Kimmich not exerting his usual influence on the game, overloads on the right and switches to a marauding Davies on the left created plenty of danger for Gladbach. With both sides pressing intently, time on the ball was at a premium, which meant flick-ons and lobs were frequent and critical to goalscoring. Lewandowski got on to the end of these passes with his usual frequency, but Yann Sommer’s exceptional shot stopping saved the day for Gladbach.

In many ways, the key figure in the first half was Upamecano, whose centrality to Bayern’s rest defense is already clear. In these phases, Bayern seemed to use a staggered 2-2 ‘box’ shape, but the problem was that both Upamecano and Süle are ‘dogs’ rather than ‘cats’. Their positioning in the first line of the rest defense – combined with insufficient counterpressing by the second line – left Bayern susceptible when Gladbach forced turnovers, since their natural tendency to step out and engage in a man-oriented fashion disrupted the defensive shape and forced other players to cover for them.

In the same breath, it would be a mistake not to mention Upamecano’s diagonal passes to Davies, which were reminiscent of the connection the center-back enjoyed with Angeliño at Leipzig. These passes sparked aggressive runs from Davies, and are a potential pillar on which to build the offense going forward. In any case, as Bayern piled on the pressure, they began using a 3-2-5 shape, with Kimmich splitting the center-backs and one of the attackers dropping off into the middle. 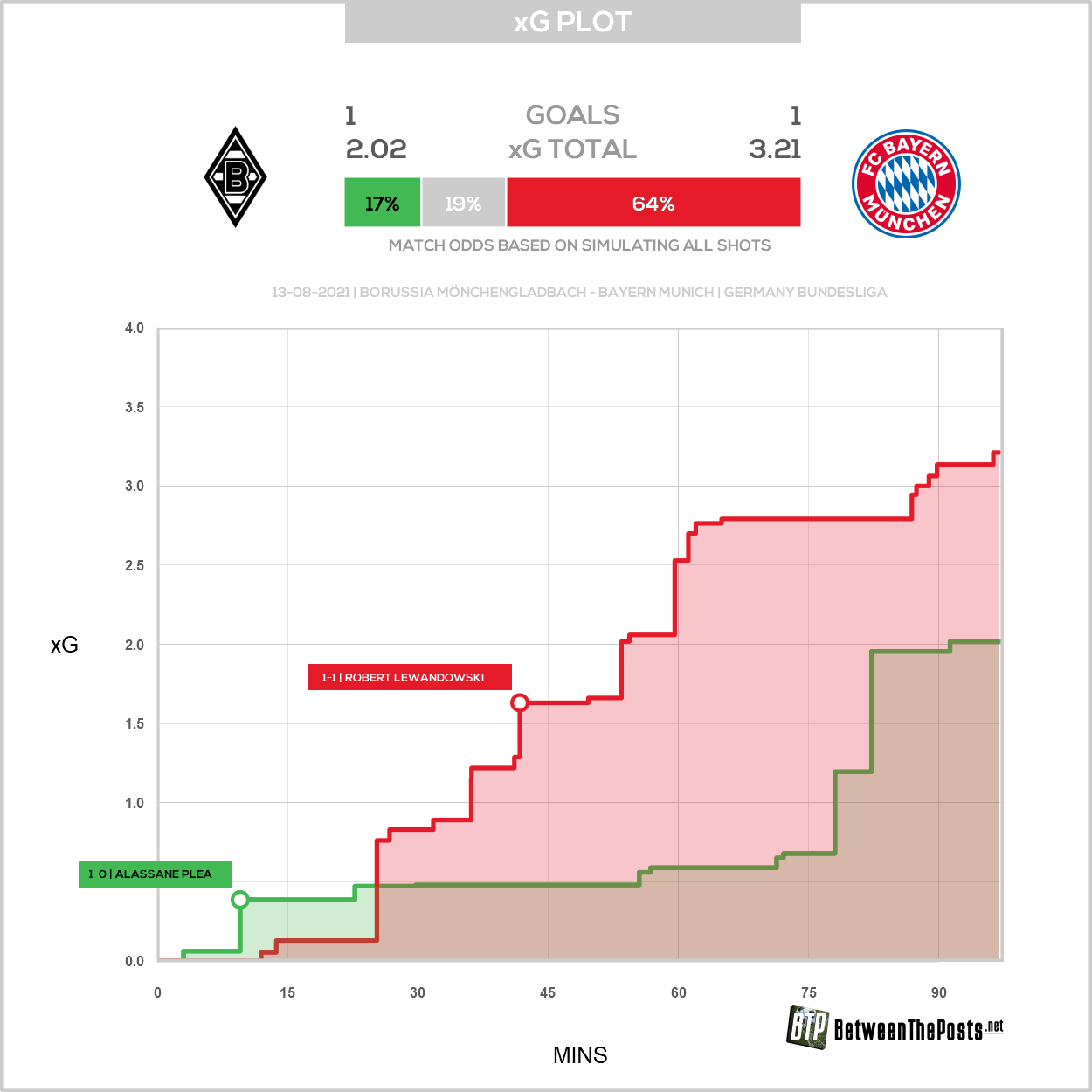 With increased possession and more numbers forward, Gladbach began to drop back, with Bayern asserting themselves towards the end of the first half. The pressure finally told in the 42nd minute, with Lewandowski punching home a Kimmich corner to restore parity.

Second half sees Bayern on the front foot

The emphasis on diagonality continued and almost resulted in a goal, as Süle’s switch to Müller on the wing allowed him to find Sané. The winger cut back on to his left before lifting a cross for Lewandowski, but insufficient contact saw Sommer collect easily. Another chance followed minutes later, with an overload on the right allowing Davies to dart into the box to get on the end of a smart Gnabry ball. Though it did not result in a goal, it was clear how the mechanisms on display in the first half continued to be crucial into the second period. Gnabry dropping into midfield to help Davies get on the ball in space was another time the two combined, and while Davies managed to cut the ball into Lewandowski’s path, but another save from Sommer kept the scores level.

It was evident that Bayern were able to generate chances more rapidly in the second period, and the change that triggered this was Stanišić moving inside to shore up the midfield while Müller took up a wide position. This allowed Bayern to leverage Müller’s passing range and ability in tight spaces, with Gnabry’s lateral movement in the middle third giving Davies a springboard to launch from. Freed from the obligation to hold the width and beat players one-on-one, Sané now focused on running onto passes in the center and stressing the defense further. While this was Müller’s starting position, he was allowed to switch flanks as he needed, with Davis varying the decision of whether to move outside or into the halfspace based on the former’s position. 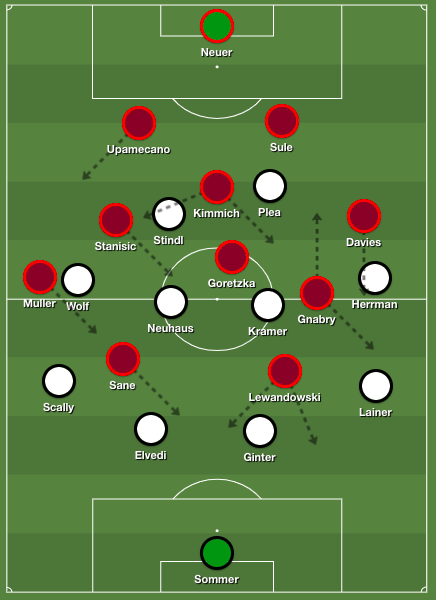 Ultimately, despite Bayern’s best efforts, the winner would not arrive. Sommer’s form since the Euros has been such that he was Lewandowski’s equal in the game, which was the only thing keeping Hütter’s side from a true pummelling. 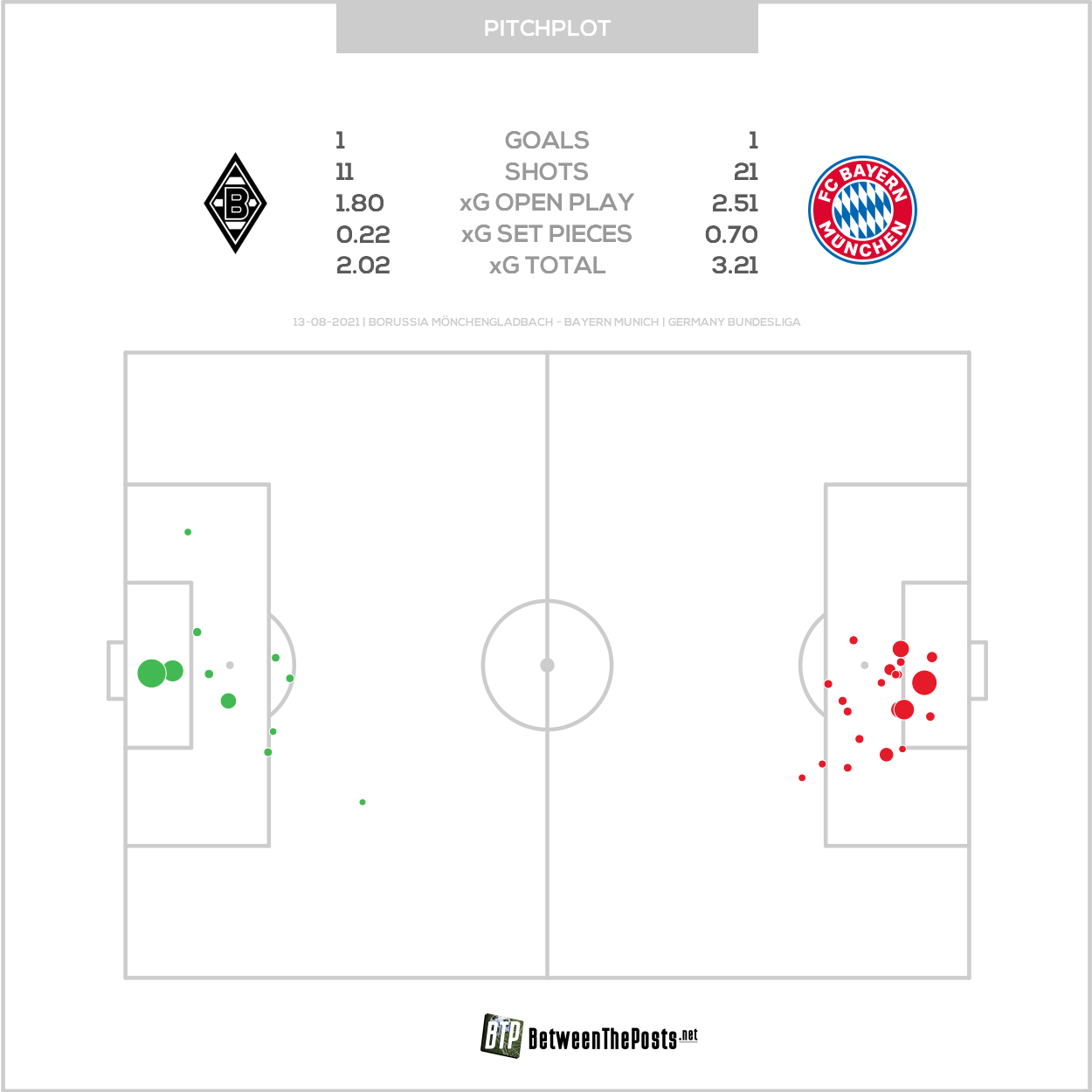 The scoreline aside, this was a strong showing for Nagelsmann on his debut. The right back situation needs to be sorted out and the team could do with more quality depth, but the team is already exhibiting how the coach’s principles can turbocharge an offense that was already among Europe’s best. The length of Nagelsmann’s acclimation process is what gives the Bundesliga’s pretenders a chance; if it happens quickly, the talent differential of the champions makes a tenth title a mere formality.

For Hütter, there is a lot to think about, since Bayern breached their backline with ease as the game wore on. On the basis of this game, a switch to a 3-4-2-1 shape cannot be ruled out, as added protection at the back might help minimise the carnage against a different opponent. 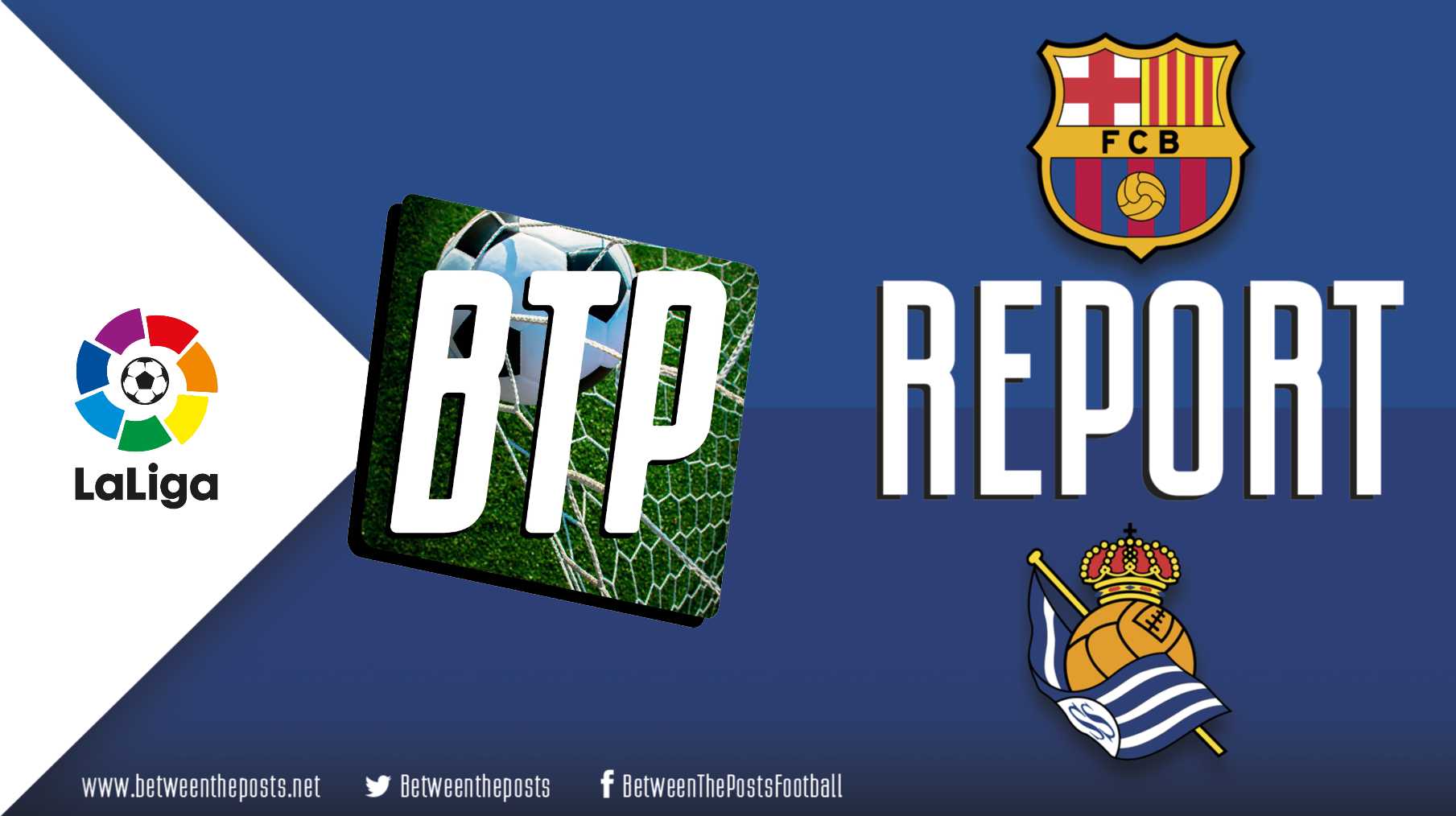