This game was about as exemplary as it gets for Borussia Dortmund’s season, as their possession figure racked up well over the seventy percent mark, but their chances were far and few between. Since Borussia Mönchengladbach put in a lackluster shift, the game had few highlights and crawled towards the final whistle.

For the first time since 2009, the Bundesliga title race went on until the final round of play. It was not a genuine neck-on-neck horse race however, as Bayern Munich needed only one point at home against Eintracht Frankfurt to retain the Bundesliga title. Spoiler: they won, and were crowned champions.

Borussia Mönchengladbach and Borussia Dortmund were not spoilered though, nor was the crowd, meaning there was a genuine excitement and tension surrounding the opening stage of this match.

This was the last home match for Dieter Hecking managing Borussia Mönchengladbach in the foreseeable future, as sportive director Max Eberl has decided the club will part ways with him this summer. Like they have done almost all season long, Mönchengladbach played in a 4-3-3 formation, which turned into a 4-5-1 most of the times.

In a game that could potentially bring them the title, Dortmund manager Lucien Favre more or less fielded what can be considered as his strongest starting eleven, taking into account injuries and suspensions.

Julian Weigl’s spell as center-back continues as he was partnered by Manuel Akanji, Raphaël Guerreiro acted as the left back, while the old soldier Łukasz Piszczek played on the right. Two familiar partnerships further ahead: Axel Witsel and Thomas Delaney together in the double pivot, 4-2-3-1 is one of the most frequently occurring formations in football. The two most defensive midfielders are called a ‘double pivot’. Mario Götze and Marco Reus as numbers nine and ten. In what was possibly his last game for the club, Christian Pulisic was gifted a start as right winger, while Jadon Sancho darted on the left.

First half offers a familiar sight for Dortmund fans

One of Dortmund’s most prominent problems in possession this season is how they always keep both Delaney and Witsel outside of the opponent’s defensive block. A defensive block is the compact group of defenders that defends a particular zone, either their own half in a medium defensive block, or the zone around their own box in a deep defensive block. Since the wingers act as wingers and do not come inside all to frequent until late in the attacking sequence, there is very little surprise for the opposing defense.

Dortmund’s 4-2-3-1 shape. Notice the positions of the players in the double pivot and the dynamics on the right flank.

There is a reason Dortmund only managed to take shy of thirteen shots per game this season, and this tactical diagram might be it. More on that in the takeaway section. Against hyper defensive schemes like Gladbach pulled off in the first half, Dortmund often struggle to produce a lot of offense.

In this match specifically, there were a lot of unforced errors, by both teams. That has nothing to do with the tactical side of the game – which we love to describe at Between the Posts – but more with the technical component and maybe even the mental side of things.

Dortmund’s possession-based approach against Gladbach compact 4-5-1 system resulted in a low quality match that had an overall boring feeling to it, as has been the case with so many of Dortmund’s games this season. There was a lack of penetration, very little genuine pressing and with Bayern racking up an early goal against Frankfurt in addition to an early goal scored by Leverkusen, two sets of unhappy fans.

The entire first half contained eight shots. Ibrahima Touré’s strike in the eleventh minute, after a quick counterattack, hit the bar, which was the closest Gladbach would come to scoring in the entire match. Luckily for anyone watching this match, the last of those eight first half shots resulted in a goal. Just before the first half stoppage time, Delaney picked out a rare pass over the top, sending off Reus. Dortmund’s captain then attempted a cross, which was thwarted unluckily by Sommer, meaning Sancho could volley the ball home and give Dortmund the lead just before half-time. 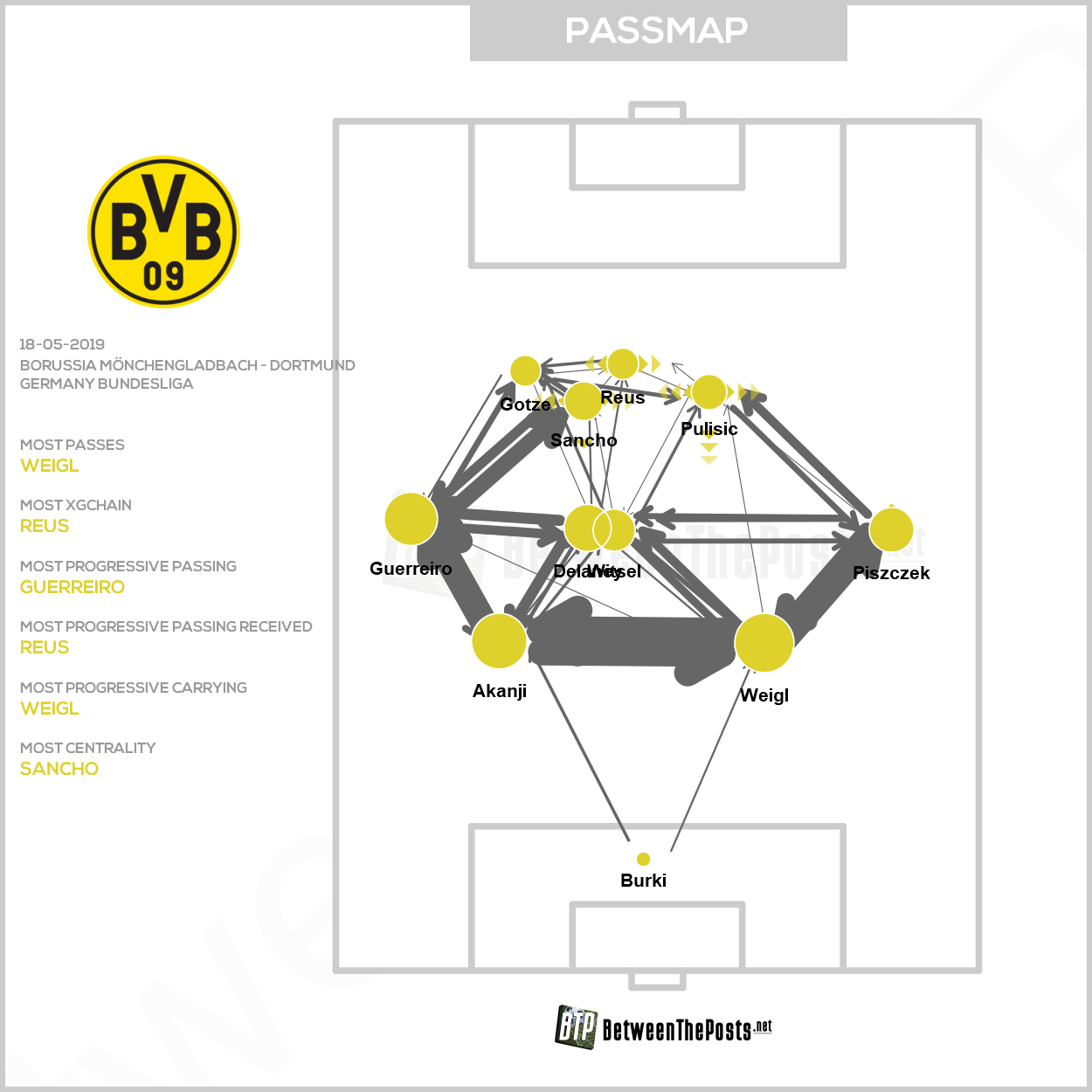 Dortmund had a lot of passes and bucketloads of possession very far away from that thing you have to reach to record a goal.

As Frankfurt managed a brief equalizer against Bayern, Dortmund could very briefly hope of the title. Sooner rather than later, Bayern started to smash in goals at will, as they have so often not been able to do, showcasing the dust of the finishing pixie that made this Bundesliga title race go on for so long in the first place.

Borussia Mönchengladbach’s competitors Leverkusen also firmly took hold of the lead in their game at Hertha Berlin, meaning Gladbach needed a win to end up fourth. Whatever managers, directors or players might tell you, they always know exactly what the scores are and what result they need. Gladbach, here, needed a win, but did not aspire to put in any form of offensive ambition. There was a lack of pressing the entire game, the attackers were never put into dangerous positions and in the entire match, Gladbach created only seven shots.

Their cause was not helped at all by a vintage Dortmund counterattack, as they sped up the pace of their passing and combinations in the middle and final thirds. The one-third of the pitch that is closest to the opposition’s goal. Gladbach were lured into leaving their positions just once, Sancho led the counterattack, feeding Pulisic, who picked out Reus with a low cross. 0-2 after an hour of play, game over.

The possession numbers show exactly how passive Gladbach were in this game. In the second half as a whole, Dortmund averaged over seventy-five percent possession. In the entire match, their total came in just over seventy. They effectively created two big chances in the entire match, scored those and kept the ball among themselves for the rest of it, unhindered by any of Gladbach’s players, making the second half feel as an incredibly dull affair.

Let’s start with Borussia Mönchengladbach. They have done quite well and even camped in the top four for a significant part of the season. Harsh critics might say a Europa League group stage spot is too little of a harvest after a season like that, but considering finances and player material, Hecking and Mönchengladbach have done a fine job. Next season – like every club that is not at the utmost top of the transfer food chain – they will lose some of their best players, as Thorgan Hazard is already certain to leave the club.

Seventy-six points for Dortmund is quite the performance, but at the same token, it would have not gotten them into a title conversation in the past Bundesliga decennium, as the champion almost always had more than eighty points. We should congratulate them on being a very stable number two, but the fact we had a title race in May was more down to Bayern’s chance conversion issues on either end of the pitch than anything else.

As mentioned earlier, Dortmund have only the seventh best Bundesliga record in terms of shots per game – coming in at 12.9 – and are only the fourth team in terms of net expected goals The amount of goals a team is expected to score based on the quality of the shots they take. created. Their second place finish – more than anything – is built on a huge overperformance in the amount of goals scored versus the chances created. Dortmund have scored 21.7 goals more than their expected goals total would suggest. According to our model, that makes them the biggest over performer of all top five European leagues.

This is nothing new for Favre, however, as his teams historically perform better than expected goals models might expect. Any bold statement on how this is done and if it will last is ungrounded, so we will just leave you with this provocative statement: either Favre knows something about finishing the rest of the managers in the game of football do not, or he has just been consistently lucky and his streak will run out at some point. Time will tell.

Bringing in the likes of Thorgan Hazard and Julian Brandt might improve their final third play and shot volume. These offensive mavericks do need the structure in place to thrive however, and if Favre persists in his ultra-conservative play in possession – which simply leaves too many players behind the ball – there will be a time where finishing will not save him anymore, and Dortmund might fall prey to chasers like Leipzig and Leverkusen.