Adopting new systems and styles can result in your team underperforming, whilst getting used to it. Both Borussia Mönchengladbach and Schalke ‘04 showed glimpses of quality, but the score remained goalless thanks to Gladbach’s high counterpressing and Schalke’s positional play out of possession.

The opening weekend of the Bundesliga season would see two of Germany’s big names go head-to-head at Borussia-Park. Borussia Mönchengladbach versus Schalke ‘04 is the most played opening day fixture in Bundesliga history, but this matchup promised to be much different in comparison to last season.

Both managers from Gladbach and Schalke are two of eight to make their managerial debuts in Germany’s top-flight. Marco Rose comes in with a strong reputation, having dominated the Austrian league with Red Bull Salzburg. With an effective vertical passing style, fast and fluid attacking transitions and a compact counterpress, Rose was destined to manage in the Bundesliga. Gladbach appointed him after dismissing Dieter Hecking at the end of last season.

Schalke’s change in the dugout was for much different reasons. Following their worst campaign in 31 years, David Wagner’s job in hand is to restore Schalke’s presence in the top half, rather than being sucked in a gruesome relegation battle. Big-money additions such as Ozan Kabak from VfB Stuttgart and Benito Raman from Fortuna Düsseldorf, certainly express the importance of a top finish for Schalke.

Marco Rose started Gladbach in a 4-3-1-2 formation; giving debuts to Stefan Lainer at right back, Breel Embolo – signed from Schalke – as a false nine A striker that constantly drops deep and plays like a number ten. and Marcus Thuram out on the left of the frontline. David Wagner used a 4-2-3-1 system for his first game of the season. Two Schalke players made their debuts, Everton loanee Jonjoe Kenny starting at right back, while Raman started out on the left wing. Both sides were missing a number of first team players due to injury, the likes of Christoph Kramer and Nabil Bentaleb both on the sidelines.

Gladbach dominate the ball but with issues

From the off, as expected, Gladbach controlled possession with ease. With three central midfielders involved in the buildup, as well as Embolo dropping deeper, Gladbach had an overload in important central areas and they were able to pass through Schalke in defensive and middle thirds. 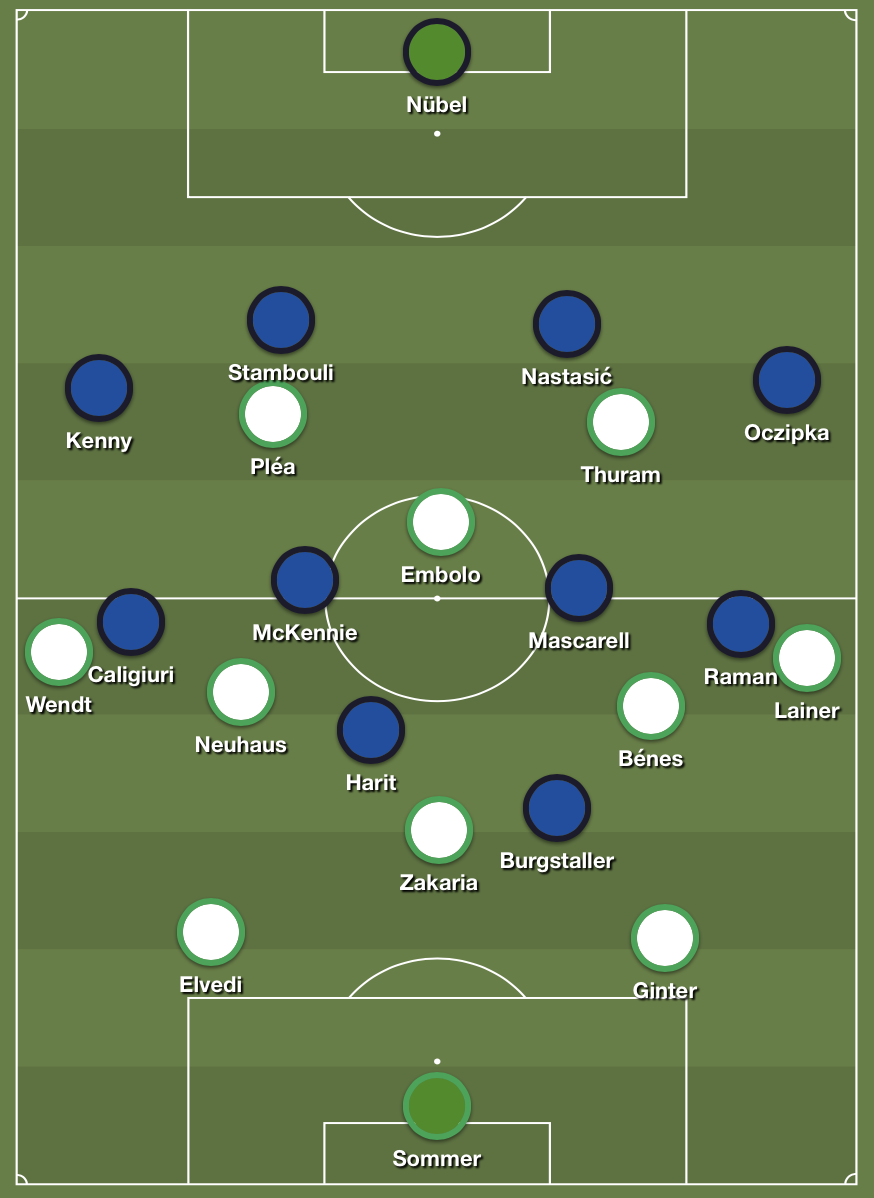 Gladbach have positional superiority when building from the back.

As well as establishing a diamond in the middle, the hosts kept their width with both Stefan Lainer and Oscar Wendt working by the side-lines as Rose’s team built up play. With players close to each other, this formed a compact passing style while still being expansive. Gladbach played between the lines with great success in the defensive and middle thirds, using vertical passes to access further up the pitch, like most ball-orientated teams do across Europe.

This is all common if you are familiar with the way Red Bull Salzburg played the past two campaigns, however Gladbach’s new front three have far from clicked just yet. Breel Embolo dropping deep and roaming between both flanks made him a good passing link. However, it was clear from early on that he was not going to be able to feed both strikers consistently through the game.

Passes were often misplaced and individual errors on the ball delayed Gladbach building attacking sequences into the final third. The one-third of the pitch that is closest to the opposition’s goal. Schalke’s 4-4-2 defensive block A defensive block is the compact group of defenders that defends a particular zone, either their own half in a medium defensive block, or the zone around their own box in a deep defensive block. remained untested in the final third and David Wagner’s team held their shape against a team constantly attempting to pull them out of it. 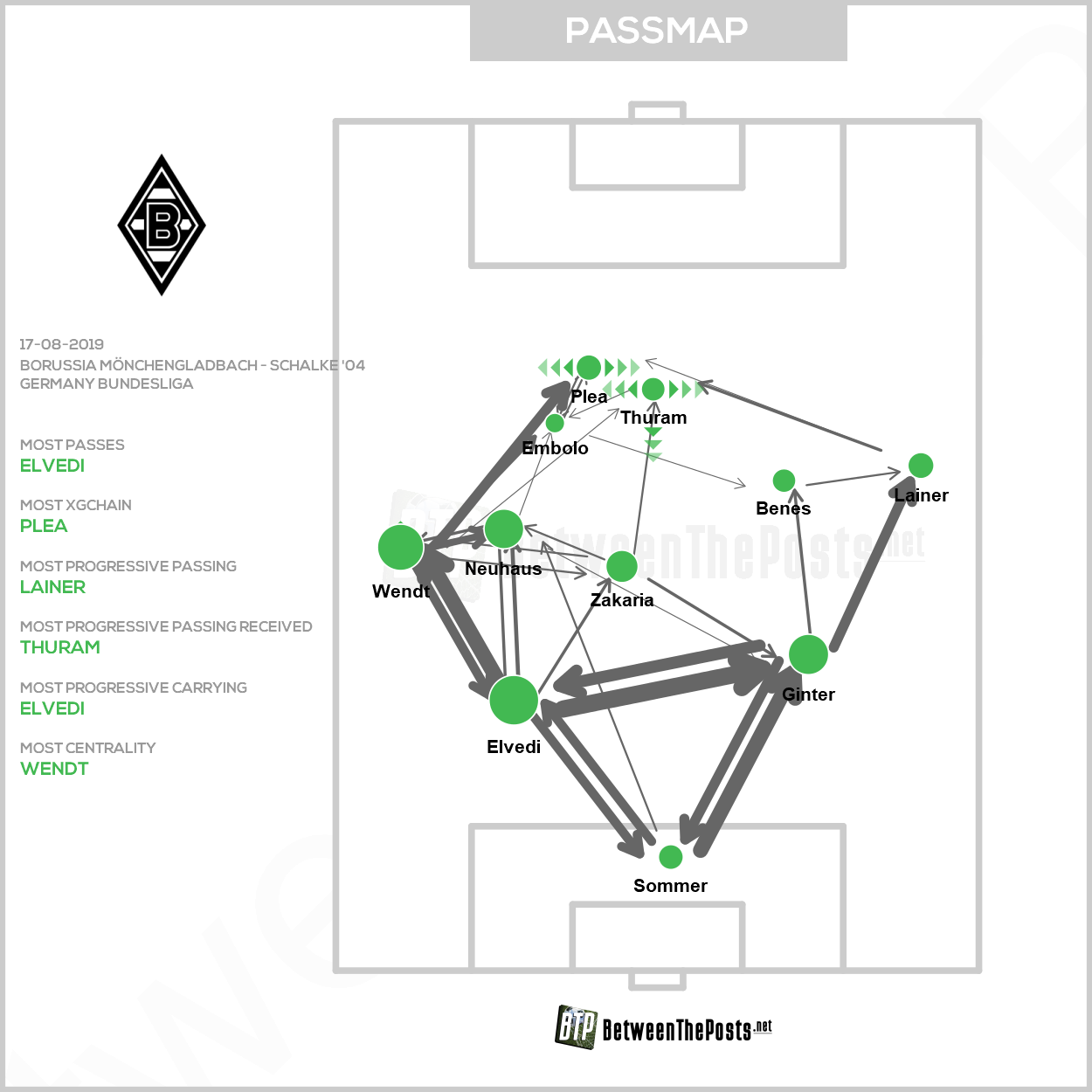 Building from the back was an issue for Schalke. Gladbach’s 4-3-1-2 formation pushed high up on the backline trying to pass out, tightly man-marking potential forward options. Wagner’s team expanding out and the double pivot 4-2-3-1 is one of the most frequently occurring formations in football. The two most defensive midfielders are called a ‘double pivot’. of Omar Mascarell and Weston McKennie dropping deep eased the pressure, but it was not too long before Alexander Nübel was forced to go long.

Schalke overloaded When one team has more players in a certain area or zone than the other team. on the right side in order to make progress up the pitch, Guido Burgstaller constantly tried to drag Nico Elvedi out of position at every opportunity that he could. Schalke’s right-sided attacks made progress, but they were at their most dangerous on the break.

Gladbach cheaply losing possession resulted in them being out of shape when Schalke regained it. With both Lainer and Wendt far up the pitch, there was plenty of space on the flanks for Schalke to go into, and they would often put a number of players in these positions as they broke forward. Amine Harit roaming from both sides enabled him to join in attacking moves. 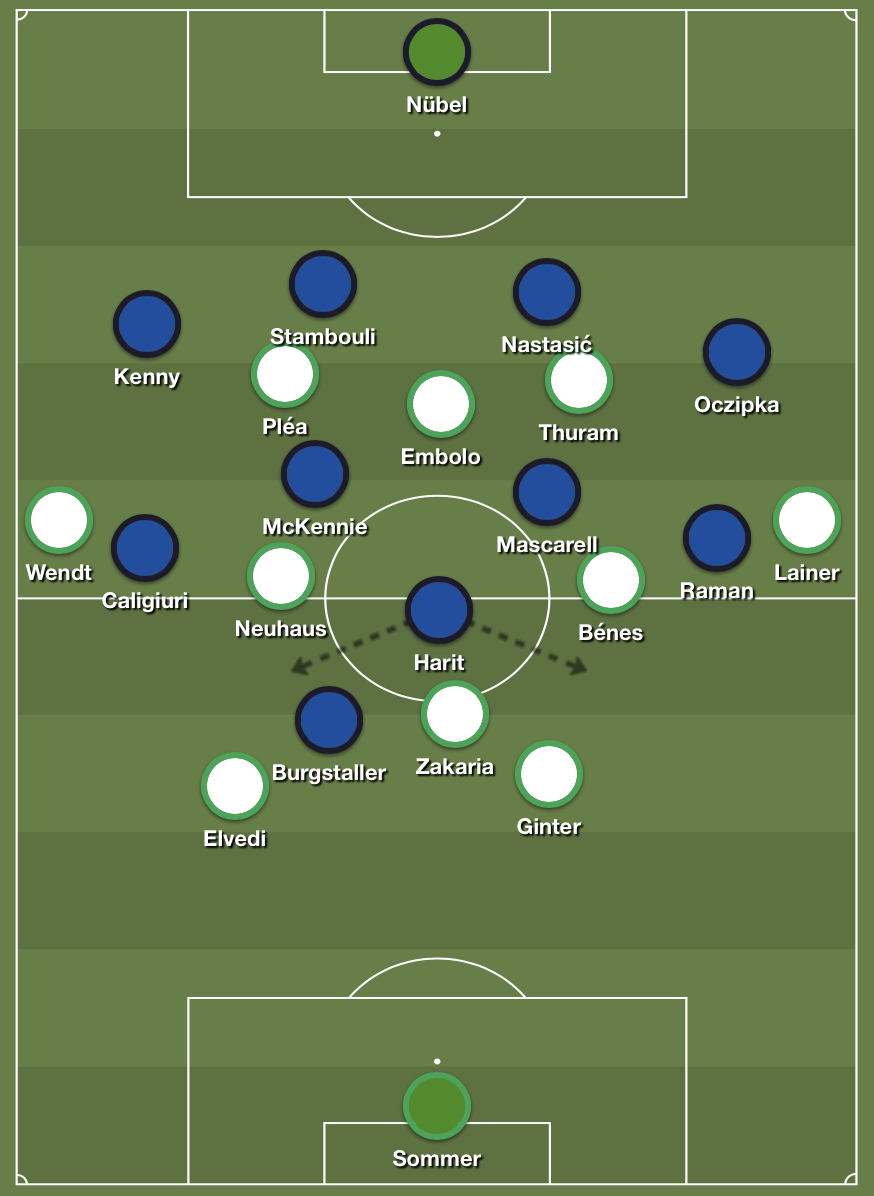 Lainer and Wendt pushing forward results in space behind.

Schalke would undoubtedly have the best opportunity in the first half, Burgstaller finding Raman, behind the defensive line, one-versus-one with Yann Sommer. His run between the fullback and center-back was brilliant, his effort most certainly was not. Raman miscued his kick horribly, a huge opportunity wasted.

Rose and Wagner run out of ideas

Direct opportunities were much better throughout the second half, without either manager altering their teams’ style or formation. A few moments into the second half, Matija Nastasić’s horror clearance, ricocheted straight to Alassane Pléa through on goal, however, he could only hit the post. Gladbach’s backline were constantly searching for that killer pass forward to open space, but Schalke’s 4-4-2 formation held strong.

Schalke continued to rely on the counterattack in order to develop good chances, but passes were misplaced and sequences fell flat as Wagner’s team could not link when motoring into the last third of the pitch. With Gladbach continuing to hold possession in the middle third and Schalke offering little, the game would grind to a halt with neither team creating the countless numbers of opportunities we are so used to seeing in the Bundesliga.

Replacing Embolo with Raffael, fifteen minutes before time, would create a resurgence in attack, the Brazilian almost instantly testing the Schalke goalkeeper with a venomous shot just outside the penalty area. However, despite controlling possession, Gladbach and Schalke were unable to create anything else, with both frontlines failing to link. 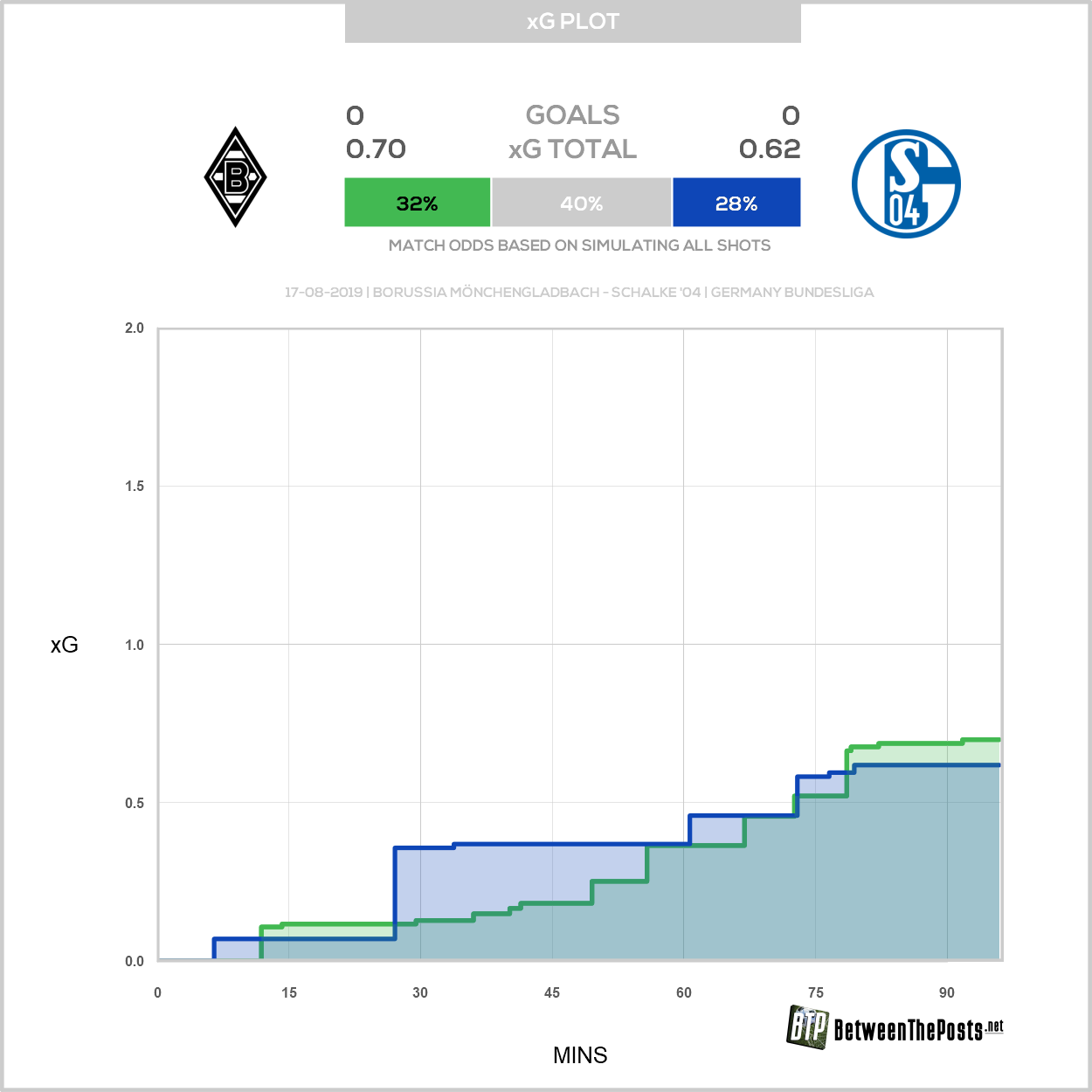 An unusually dull affair for a Bundesliga matchday, especially with goals flying everywhere else. Embolo, Pléa and Thuram have the potential to form a lethal front three, but perhaps dropping Embolo deep is not the way forward, for now at least. Gladbach certainly have the potential to be one of the most attractive teams to watch with Marco Rose at the helm. Certain systems can take time to get used to, and with a number of new signings and a new style to work with, Gladbach will have to be patient.

For Schalke, a point away at Borussia Park is a major plus point, with the sheer number of players that are missing. The fixture list has not been kind to Schalke, with Bayern München, Hertha BSC and RasenBallsport Leipzig within the next five league matches. Wagner has a huge task on his hands, but collected a somewhat positive start against one of the Bundesliga’s big clubs.

Use the arrows to scroll through all available match plots. Click to enlarge.
Check our match plots page for plots from other matches. 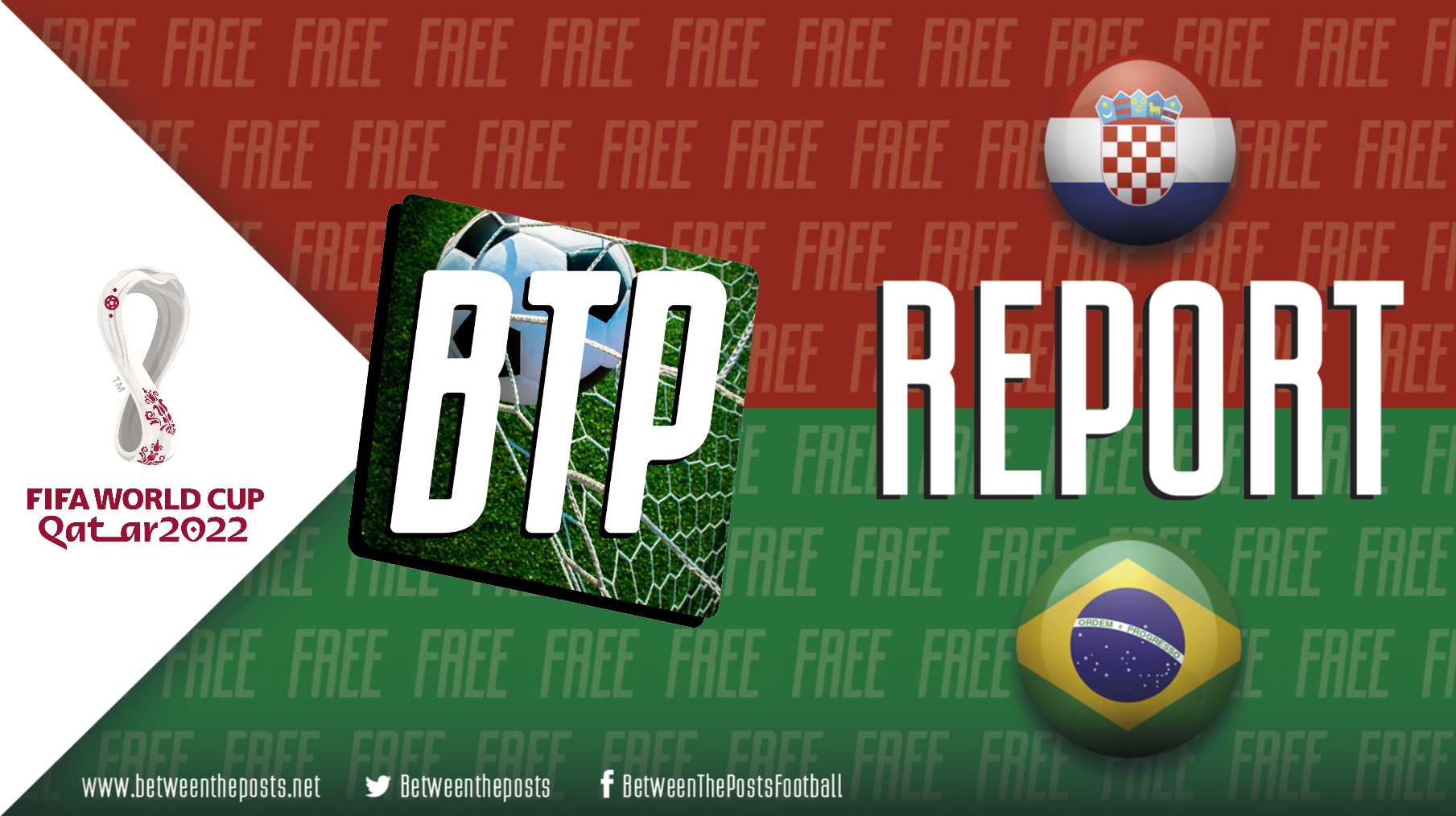 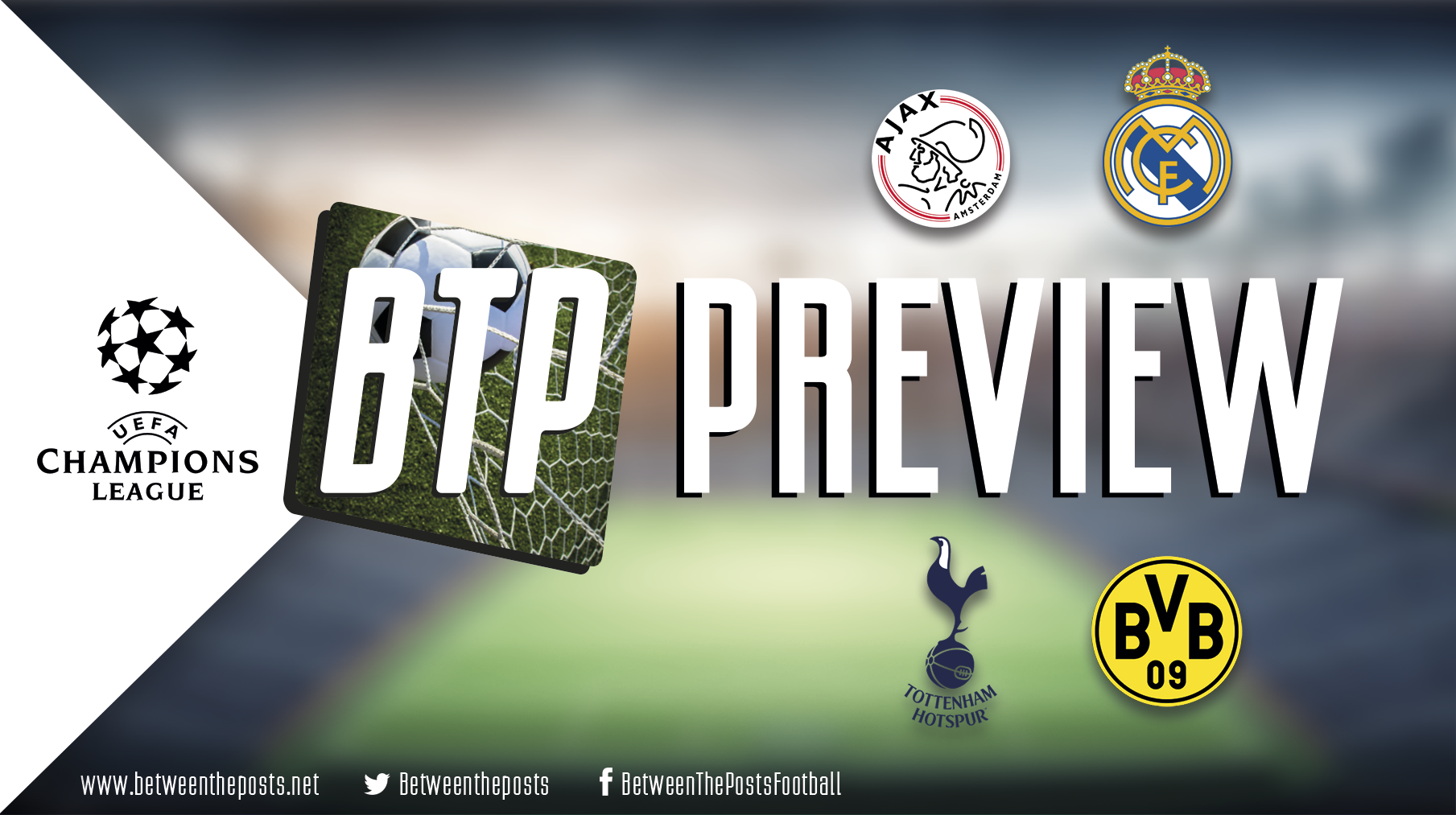