In a direct duel for a European competition spot, Hoffenheim controlled the first half through possession. By overloading space between the lines, Hoffenheim were creating chances at will, while Gladbach lacked penetrating power. In the second half, Gladbach switched formation, which allowed them to make use of space in wide areas. Exactly this led to a late equalizer.

Two sides still aiming at qualifying for next season’s European competitions in a direct matchup. What’s not to like?

Gladbach started very well into the season and briefly flirted with participating in the title race, until their performances dropped in the second half of the campaign. Hoffenheim on the other hand constantly stayed around rank seven and missed the opportunity to move up into higher regions of the standings multiple times.

Gladbach started the game with a 5-3-2 formation. Different to their typical 4-1-4-1, Gladbach aimed at defending Hoffenheim’s powerful attack with a back five. Therefore, Matthias Ginter moved between Nico Elvedi and Tony Jantschke in central defense. Up front, attacker Alassane Pléa was tasked to provide depth and took over the role of the target man for crosses, while his striking partner Thorgan Hazard was supposed to connect midfield and attack by dropping into space between the lines.

In one of his last matches at Hoffenheim, Julian Nagelsmann lined his side up in a 3-4-2-1 formation. The two central midfielders were Florian Grillitsch and Kerem Demirbay, who were primarily used to close down the halfspaces If you divide the field in five vertical lanes, the halfspaces are the lanes that are not on the wing and not in the center. Because there is no touchline like on the wing, players have freedom to go everywhere. But this zone often is not as well-defended as the very center. This makes it a very valuable offensive zone to play in and a lot of chances are created by passes or dribbles from the halfspace. Gladbach aims to use when attacking. Wing-backs Nico Schulz and Pavel Kadeřábek attacked down the sides. Up front, the robust Ádám Szalai acted in a central role between Andrej Kramarić and Ishak Belfodil. 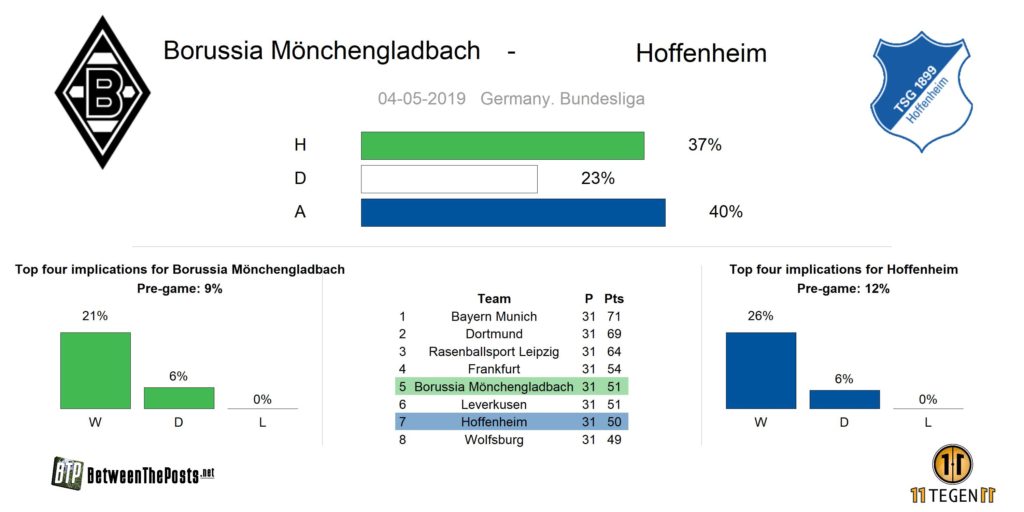 Nagelsmann clearly wanted his side to disrupt Gladbach’s buildup as early as possible. To press the home side, Hoffenheim used an asymmetrical shape. While right wing-back Pavel Kadeřábek often completed the back line to a back four, left wing-back Nico Schulz moved high up the field to press Gladbach defender Elvedi.

With their press, Hoffenheim could often force Gladbach to play imprecise passes which were intercepted by their midfielders. And even when Gladbach were able to overplay the first line of press, Nagelsmann’s side prevented Gladbach from threatening the goal of keeper Oliver Baumann by quickly collapsing back into a defensive unit.

They were able to do so because of their back three. One of the central defenders followed opposition attacker Thorgan Hazard when the Belgian dropped into midfield. Therewith, Nagelsmann’s side was capable to prevent Hazard from receiving and turning. Furthermore, the forward movement of the defender was always covered by the other two central defenders. Together with at least one wing-back, Hoffenheim still defended with a line of three in the back while Gladbach missed depth since attacker Pléa was the only one staying up front.

Since one of Hoffenheim’s center-backs left the last line during the attacking phase, Hazard had to track back. As a result, one of Gladbach’s key players could not take in a position to quickly counterattack. Instead, by staying with Hoffenheim’s defender, the way towards the goal became longer and Hoffenheim could directly mark Hazard once losing possession.

Hoffenheim’s threatening attacks in the first half

With their attacking trio and both wing-backs positioned on the last line, Hoffenheim could pin back all five defenders of Gladbach deep down in their half and create five-versus-five situations up front. In midfield, the central midfielders attempted to position themselves on different lines. Whereas Florian Grillitsch often stayed close to the back three to collect the ball, his partner Kerem Demirbay moved higher into space between the lines.

Gladbach attempted to prevent Hoffenheim from playing into central areas. Therefore, the striking duo moved out to press two defenders of Hoffenheim’s back three while either of the advanced midfielders moved out to press the third player building up. To avoid passes into midfield, the pressing players used their cover-shadows. However, by attracting Gladbach’s midfield with short passes, Hoffenheim were able to tear the opposition midfield away from their defensive line. Thereby, the space between the lines widened and Demirbay was given plenty of space to exploit.

In addition to that, Hoffenheim perfectly executed one of Nagelsmann’s key principles. The young German coach wants his players to provide as much depth as possible but only as much width as needed. Therefore, both wing-backs often attacked down the halfspaces instead of staying on the flank. As a consequence, the opposition back line is often confronted with a further player. As any defense usually aims at marking direct opponents closer the shorter the distance towards the own goal, this concept forces the wing-backs to mark the opposition wing-backs instead of covering their central defenders. 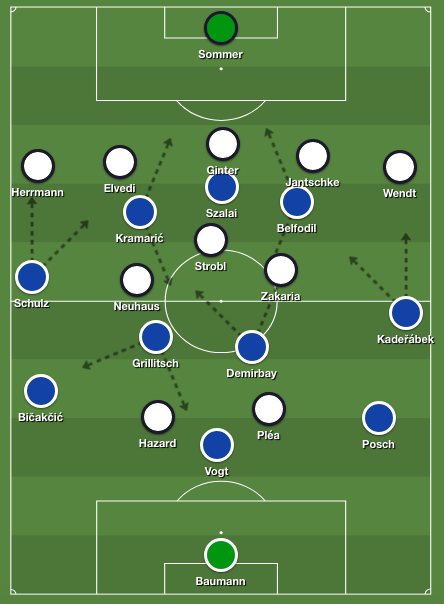 As a logical consequence of Hoffenheim’s powerplay of the first half, Nagelsmann’s side scored the leading goal. Although the goal resulted from a corner kick, Hoffenheim had outplayed Gladbach’s defense with through passes towards the goal again. Although one of Gladbach’s defenders was capable of clearing the ball within the penalty area, it was only a matter of time when Hoffenheim would score a goal.

During half-time, Gladbach coach Hecking changed the formation of his side to 4-1-4-1. The wingers were supposed to press Hoffenheim’s right and left center-back during the buildup while striker Pléa pressed the opposition central defender. Opposite to their 5-3-2 setup of the first half, Gladbach were able to press the back three without losing control of midfield areas. With single pivot Tobias Strobl and advanced midfielders Zakaria and Florian Neuhaus, Gladbach had still three players to cover central areas.

Double change for the second half:

Being confronted with the wide forwards of Gladbach, Hoffenheim often had to drop after losing possession. With right winger Ibrahima Traoré, Hazard and Plea, Gladbach could create a numerical equality against Hoffenheim’s back three. Therefore, Nagelsmann’s side could not aggressively move forward to press the ball-carrier as they did in the first half, but had to drop instead to secure their own goal. That allowed Hecking’s team to progress up the field more often.

Hazard played as the left winger in the second half and greatly benefitted from his new position. Since Hazard played on the wing, Hoffenheim could not mark Gladbach’s key player man-to-man anymore. Especially because left back Oscar Wendt supported the Belgian during the attack and thereby created a numerical advantage against wing-back Kadeřábek. As a result, Hazard gained more space and made use of this with dribblings. After on of his inside cuts, the ball fell to Neuhaus, who picked out Ginter, who was able to score the equalizer in the 72th minute.

On the other end of the field, Gladbach’s more offensive approach led to gaps within their defensive department. The back four struggled to defend well executed counter movements of Hoffenheim’s attacking department. And midfielder Demirbay was constantly spraying through passes towards his teammates. Only a lack of efficiency from Hoffenheim’s attack kept Gladbach alive.

Notwithstanding, Nagelsmann’s side scored the second leading goal again. After Gladbach lost the ball and holding midfielder Strobl left his position to counterpress, After losing possession, a team immediately moves towards the ball as a unit to regain possession, or at least slow down the pace of the counterattack. Hoffenheim quickly overplayed Gladbach’s midfield. Substituted midfielder Nadiem Amiri used the given space due to Strobl’s absence. After receiving the rebound from a shot taken by wing-back Schulz, Amiri himself scored the second goal for Hoffenheim.

Hecking’s changes and substitutions would be proven right another time before the final whistle. The Gladbach coach substituted Josip Drmić for midfielder Strobl and therewith deployed a 4-4-2 shape in the final stages of the match, casually using his third formation of the day.

In this formation, their strategy to get behind Hoffenheim’s wing-backs to create chances succeeded. After a rotational movement between right back Louis Beyer and right winger Traoré, the latter received the ball in the back of left wing-back Schulz. From there, the ball was played into the box where Pléa assisted his striking partner Drmić to score the equalizer. An exciting six minutes ensued, but none of the teams came close to another goal, meaning the game ended in a draw.

“Of course, we are disappointed with the result. We played a very courageous first half, but many of our counterattacks and chances were sluggish towards the end.”#BMGTSG pic.twitter.com/Ng7at9IHzK

All in all, Hoffenheim wrote another chapter of their endless story of games with a large number of missed chances. Especially Demirbay used his role between the lines to outnumber the opposition defense and fed the attackers with through passes. Moreover, by successfully taking Hazard out of play, Hoffenheim could stem Gladbach’s biggest threat.

Gladbach on the other hand were capable of penalizing Hoffenheim’s bad conversion of chances in the second half. With a different approach and their more threatening wing play, Hecking’s side created goal scoring opportunities which were used effectively.

The draw leaves both teams with the opportunity to reach Europa League or even Champions League. However, all contenders move closer together in the standings which promises a thrilling final of the campaign.

Between the Posts weekend preview: a look at the games we picked for the upcoming weekend!