Manchester United had yet another slow start to a game and were slightly flattered by a 1-1 scoreline at half-time, having been outplayed by Bournemouth. Again though, they found their footing in the second half with a more direct approach. After threatening the Bournemouth goal several times, United finally got a winner in the final minutes from substitute Marcus Rashford.

Bournemouth’s form in the first ten games of the season has allowed them to temporarily displace Manchester United from the top six of the Premier League table. That shouldn’t be the case for too much longer, but aside from United’s disappointing performances this season, it is also testament to the work Eddie Howe has done in putting together this Bournemouth team. One of the key factors in their strong performances this season has been their attacking midfielder/winger David Brooks, who seems to have taken the step up from Championship football in his stride.

For Manchester United, this game was the first in a testing week which sees them visiting Juventus and Manchester City. Manager José Mourinho made just one change from the team that started against Everton, bringing Alexis Sánchez back in the team – as a striker –  to replace Marcus Rashford. Mourinho has been looking for the right mix up front all season long, with Romelu Lukaku having been out of form, and now injured.

Bournemouth also made one change after their 3-0 demolition of Fulham, with Junior Stanislas replacing Charlie Daniels, meaning Adam Smith moved to a left-back role and Stanislas occupied the right wing in Eddie Howe’s 4-2-3-1 shape. 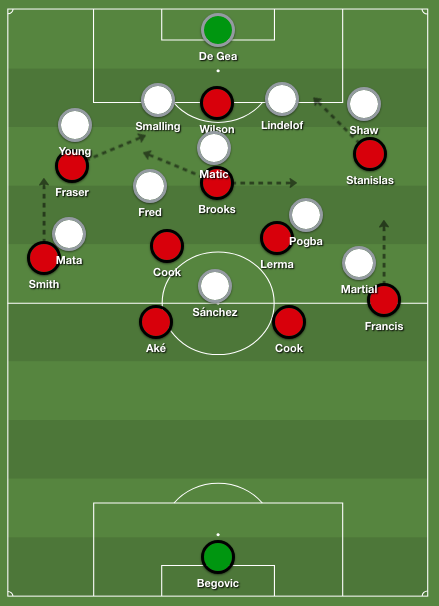 United’s slow start
For the first thirty minutes or so, United were barely in the game. Bournemouth looked comfortable on the ball, and when they did not have it, they were a threat to United on the counterattack with their pacey front four running into space behind United’s full-backs.

In their 4-2-3-1 formation, Bournemouth’s left-back Smith made frequent forward runs against the defensively weak Juan Mata, who struggled to track those runs. On the other side of the pitch, Simon Francis was a bit more conservative with his forward movements.

Where United struggled the most was in central midfield, where they could never really get close to Bournemouth. Howe’s side were constantly able to find space in key areas. Central midfielders Fred and Paul Pogba seemed unsure how to deal with Lewis Cook and Jefferson Lerma in deeper areas for Bournemouth, while Ryan Fraser and Stanislas could roam into the spaces behind them. Attacking midfielder David Brooks constantly positioned himself in the halfspaces If youz divide the field in five vertical lanes, the half spaces are the lanes that are not on the wing and not in the center. Because there is no touchline like on the wing, players have freedom to go everywhere. But this zone often is not as well-defended as the very center. This makes it a very valuable offensive zone to play in and a lot of chances are created by passes or dribbles from the halfspace. and occasionally into wide areas. United’s defensive midfielder Nemanja Matić generally struggled to stay near him, allowing Brooks to create triangles with his wingers and full-backs and pick the ball up behind United’s midfield.

United’s defensive lethargy was summed up after a Bournemouth corner, as Mata allowed Stanislas to run in behind him with minimal attempt to mark him or cover the passing lane that Cook used to skilfully slide the ball behind United’s defense. From there, it was a simple task for Stanislas to hit a low cross into space, as Callum Wilson connected and put Bournemouth 1-0 up.

United come alive
As the game wore on, Bournemouth’s pressing became less intense and United saw more of the ball. A notable aspect was the very advanced role of Pogba, effectively playing on the last line of defense at some points. United had now morphed into a 4-2-3-1 shape with Pogba as attacking midfielder, rather than playing in theur their usual 4-3-3 formation. This mostly improved United’s ball retention and attacking play.

As a result, United equalised in the 35th minute thanks to yet another goal from Anthony Martial. It was assisted by Sánchez, who generally gave a decent account of himself leading the line, considering his previous form. He provided better link-up play than Lukaku in recent times and offered some smart runs in behind Bournemouth’s defense.

Intensity is required for any strategy and United improved in this aspect after the half-time break, as United were winning more second balls and especially showed to be more purposeful with possession.Bournemouth defended in a 4-4-2 shape with the strikers starting in quite deep positions, not far in front of the midfield line, making it a lot harder for United to progress the ball in central areas. As a side effect, Bournemouth had a hard time to break out of their low block A low block refers to a team that retreats deep in their own half out of possession, generally only disrupting their opponents around their own box. in the second half as clearances fell to United defenders mostly uncontested. 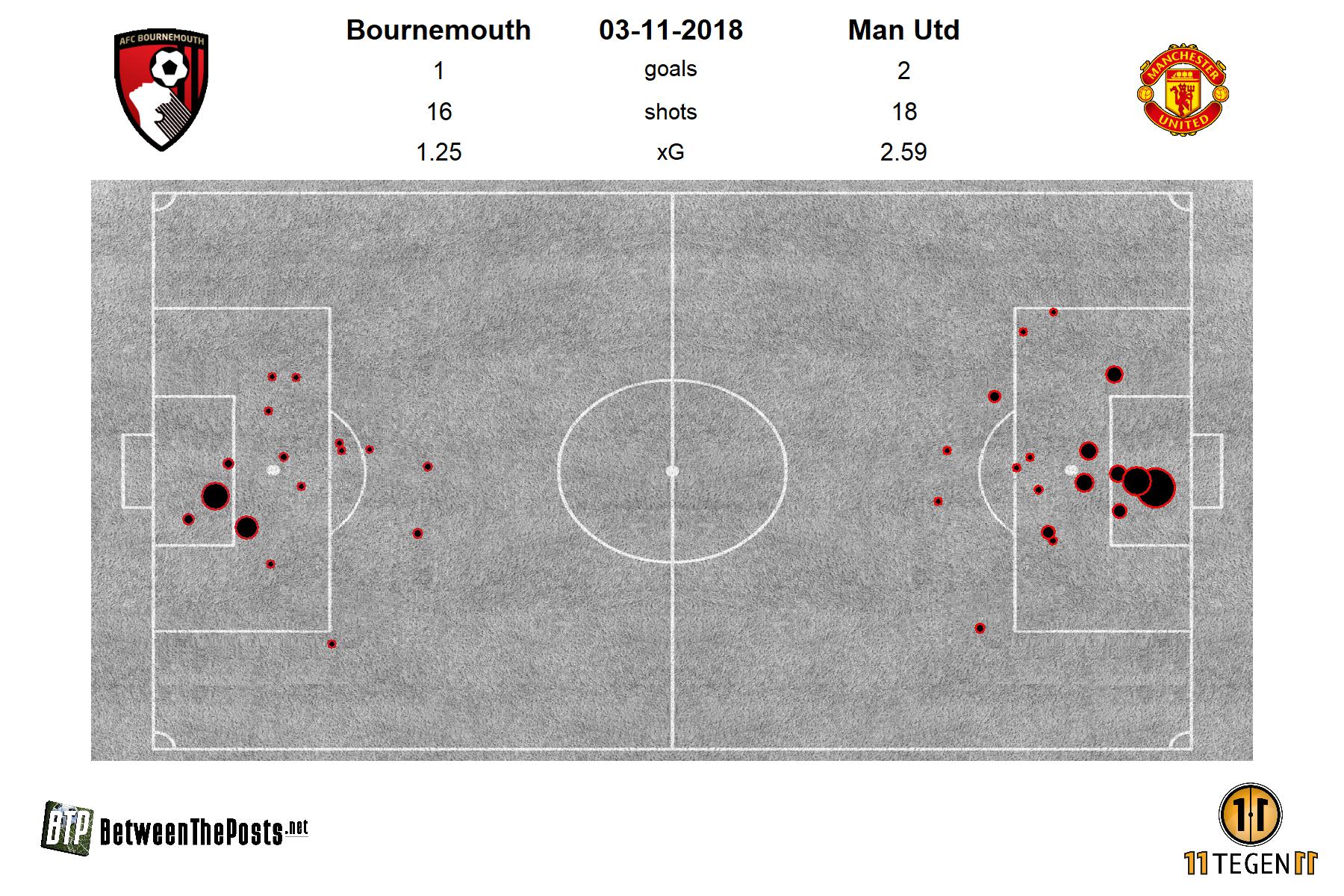 Herrera and Rashford prove valuable substitutes
The substitutions of Fred and Mata – which also meant the introduction of Ander Herrera and Rashford – further improved United’s level of play. Not only because Fred and Mata both had fairly poor games (although Fred did make a couple of decent regains of possession), but also because Rashford now – alongside Martial and Sánchez – provided United with another threat in possession, utilizing his speed in behind Bournemouth’s defense. Rashford played as the center-forward, which meant that Sánchez moved to the right. This did seem to reduce his impact in the game, and he was later replaced by Lingard.

Like in the last game against Everton, United’s left side was a big source of attacking threat, although this time, in a more direct fashion, with long balls and passes in behind the Bournemouth defense, as mentioned.

As the half went on, Bournemouth’s right-back Francis, and right central defender Steve Cook struggled against the speed and trickery of Luke Shaw, Pogba and Martial on that side. This culminated in United’s stoppage time winner, where Pogba was isolated against Cook on the left of the penalty area, and his stepover beat Cook with relative ease. Pogba’s floated cross was missed by Bournemouth’s central defender Nathan Aké, which gave Rashford the chance to convert at the back post to give United the late win in Fergie time. 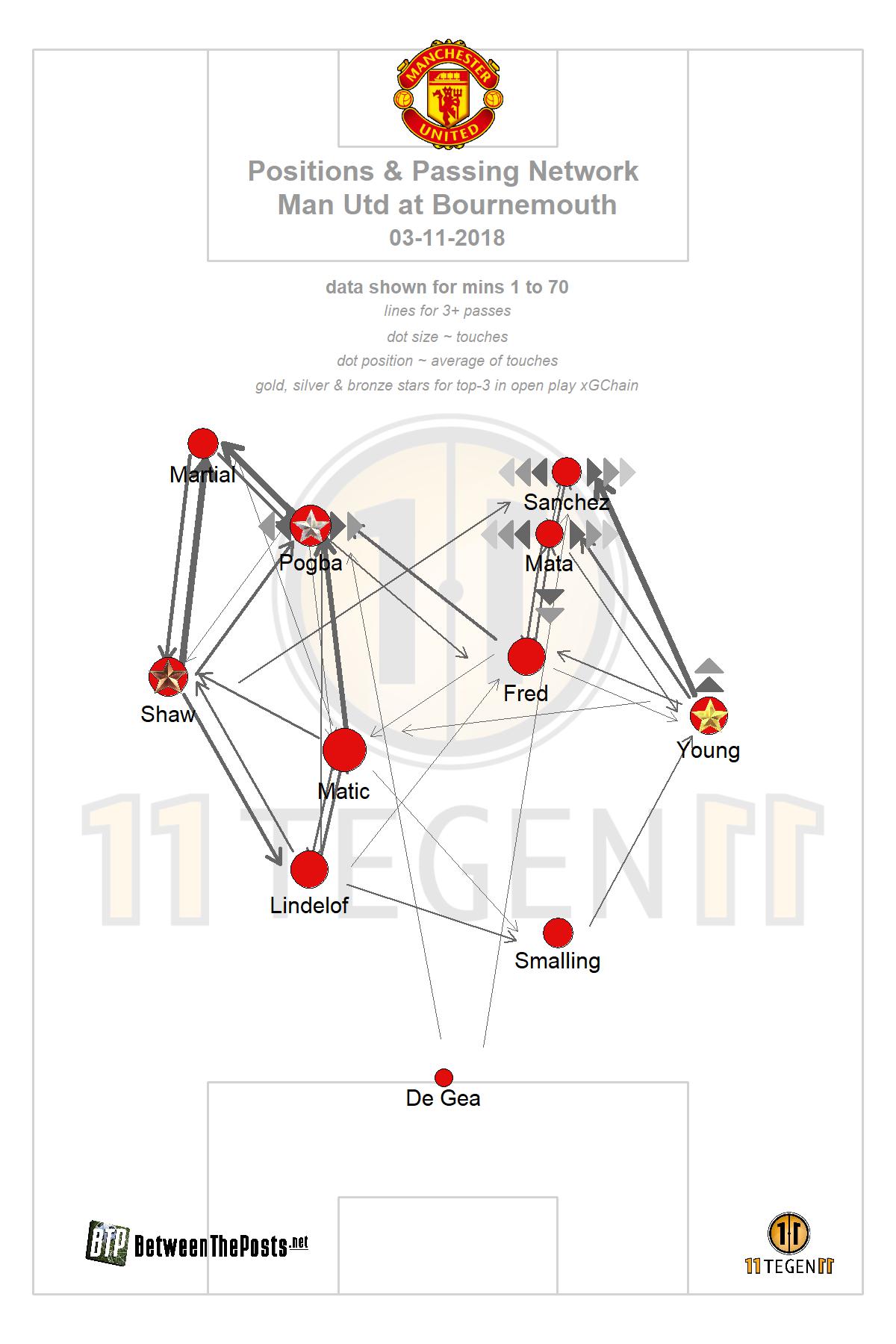 Takeaways
Post-match, Mourinho said at half-time, he felt like “the luckiest manager in the Premier League”. He was right to feel that way, as United went into the break with an even scoreline despite being thoroughly outplayed by the home side. Looking ahead to the game against Juventus, United’s manager will surely be hoping United can replicate some of their second half tempo from this game and avoid a repeat of the footballing lesson they were handed at Old Trafford by the Italians.

Bournemouth gave a good account of themselves as a proactive and entertaining team, especially in the first half. It was clear to see why they have had the results they have been having this season. Despite this, they might feel disappointed at the way they faded throughout the game, as United had already breached their defense a few times before they ultimately got their winner.

Use the arrows to scroll through various match plots. 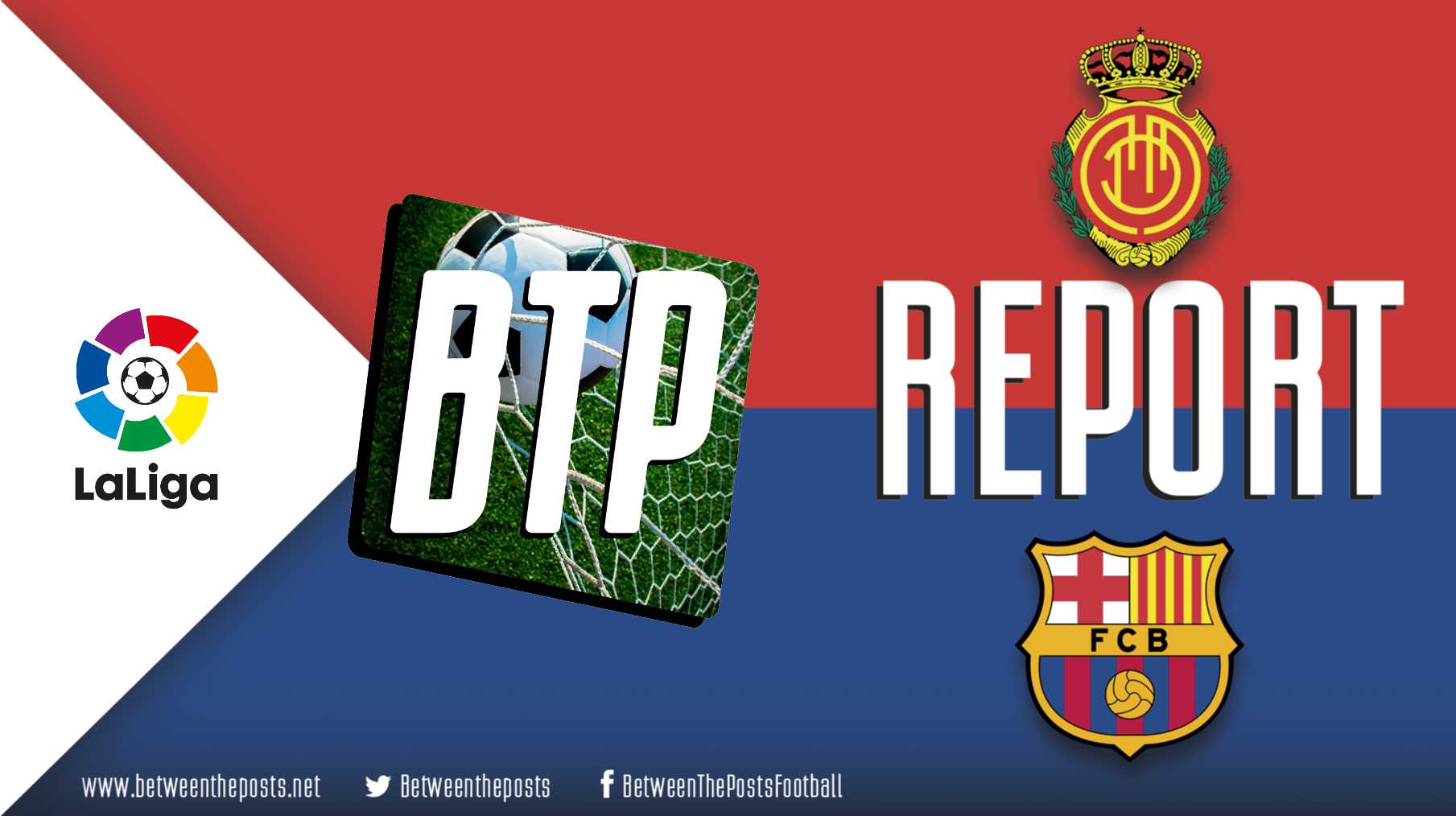