Unai Emery’s 4-4-2 diamond system dominated early on, but Arsenal’s post-goal game-management cost them dearly in the end. Emery’s second half changes made matters worse, because they killed the connection between defense and attack. Brighton capitalized and took a deserved point against a top six team.

Three changes were made by Chris Hughton, most likely for rotational reasons in such a busy period. Florin Andone made way in attack for Glenn Murray as Jürgen Locadia stepped back into a wide midfield role. In the midfield, Yves Bissouma was replaced by Dale Stephens and Lewis Dunk was out through suspension, so in his place came Shane Duffy.

After bouncing back against Burnley to get back on winning terms, Emery made three changes to the side that started that game. Again starting in a 4-4-2 diamond formation, Stephan Lichtsteiner came in for Ainsley Maitland-Niles at right back, Laurent Koscielny came in for the injured Nacho Monreal at center-back and Lucas Torreira replaced Mohamed Elneny in the middle.

Emery’s side had a clear focus in the first half: to attack down the right. In their midfield diamond, they constantly recycled the ball back and forth, in and around the right halfspace. If you divide the field in five vertical lanes, the halfspaces are the lanes that are not on the wing and not in the center. Because there is no touchline like on the wing, players have freedom to go everywhere. But this zone often is not as well-defended as the very center. This makes it a very valuable offensive zone to play in and a lot of chances are created by passes or dribbles from the halfspace. More often than not, Mesut Özil – who was mostly positioned towards the right, just behind Brighton’s midfield – would drop into a deeper position just to the side of the home side’s midfield three. With Brighton’s wide midfielders staying deep, it left enough room for Özil to drop into the space in between.

Simultaneously, Lucas Torreira would push up into the next line, also behind the opposition’s midfield. Now, with Özil filling his previous position, he could maintain the structure. This was important since Özil’s movements to the ball also helped to dismantle the Brighton shape. The wide midfielder, Locadia, and the ball-near central-midfielder, Davy Pröpper, were encouraged to step out and apply pressure, even though only Pröpper should have done so. As a result, a more stretched channel in the middle would appear, which could open the avenues into either Torreira or Alexandre Lacazette, while it also freed up Lichtsteiner to receive diagonal switches up against Brighton’s backline. 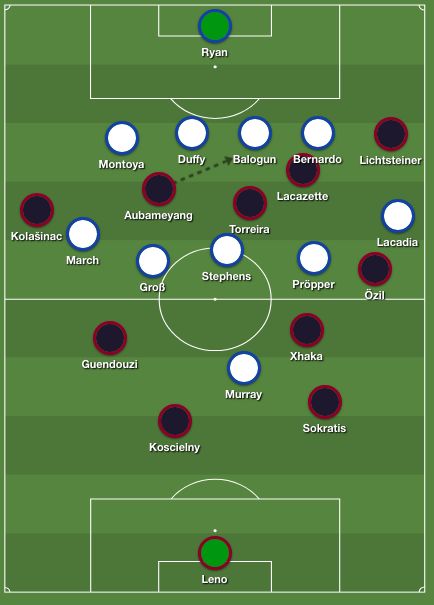 Probably an underrated aspect of the way Arsenal were setup to deal with Brighton’s defensive approach – which usually looked to apply a decent level of pressure, whilst holding a fairly high line – was that the players on that side with a lot of the ball were left-footed, meaning they could cut inside. This enabled the likes of Xhaka and Özil to duck inside to evade pressure and still move forward more easily.

Up front the positional theme continued. Pierre-Emerick Aubameyang drifted from the left wing to meet up with Lacazette. They would often make runs towards the right side, also offering the same kind of out-ball option Lichtsteiner would have done in that position.

This paid off as early as the eighth minute, as a long ball pumped into the far corner from Mattéo Guendouzi did not quite find either of the two strikers. It instantly pinned Brighton into their own corner, however. Leon Balogun’s clearance was deflected short by Lacazette, before Torreira – who might have been positioned so high to sweep up against turnovers – nicked in front to reclaim the ball. After a scramble in the box it eventually found its way to Aubameyang who made no mistake converting this one in style.

After scoring the opening goal, Arsenal did seem to falter somewhat. Their approach in possession started to change, as they were becoming more cautious, which gave Brighton more opportunities to apply greater pressure on the ball, with Murray even upping the ante at the top of the defensive shape. With so long left in the game still, it seemed strange that the away side chose not to keep pushing for the next goal.

Brighton get back into the game

Thanks to the way Arsenal were going about the game, Brighton now had more chances to settle on the ball. Their approach was far more straightforward albeit similar in essence – find the diagonal balls into the wingers and look to get it into the box.

What helped them to do this was a fault in Arsenal’s press. In their 4-5-1, usually stepping up into a 4-3-3, there was no player responsible for covering Brighton’s holding midfielder, Stephens. Arsenal’s midfield three stayed too deep and the front men were dotted across the backline more often than not. Had the away side maintained their diamond shape in their press as well as their attack, the access into the number six might not have been so easy. 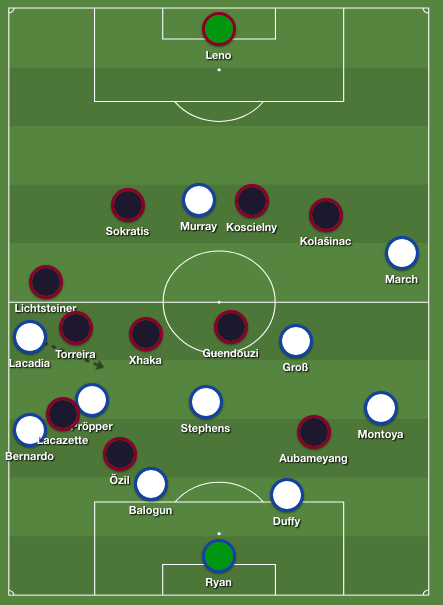 Pressing shape shows the hole in the middle that puts Stephens in a lot of space.

The same issues reoccurred in Arsenal’s counterpress. There would often be a gap between the attackers and midfielders in their covering of options, with neither line of defense identifying the issue Stephens provided.

In the 24th minute, the attacking plan almost brought Brighton back level. Stephens had time on the edge of the box to switch it across to the on-rushing Martín Montoya, whose low cross found Murray. The striker’s deflected effort was tumbled in before being brought back for a foul on Bernd Leno.

Balls over the top cause problems for both sides

It was clear that Brighton were still struggling to cope with the threat of Aubameyang’s runs. More than anything, it came down to how individual players attempted to deal with the threat. At the half hour mark, Aubameyang started a diagonal run from the left wing; Montoya stepped back to give himself a yard’s advantage but was still no match, pace-wise. It resulted in a very good opportunity wasted, as Aubameyang came close to doubling Arsenal’s lead.

Five minutes later, a similar situation occurred but in different circumstances. Off the back of a corner, Pröpper launched a ball the length of the field, aiming for two runners on the counterattack. Guendouzi did not notice Locadia running off the back of him, so the forward beat him to the ball, took it past Leno to score the equalizer ten minutes before half-time. 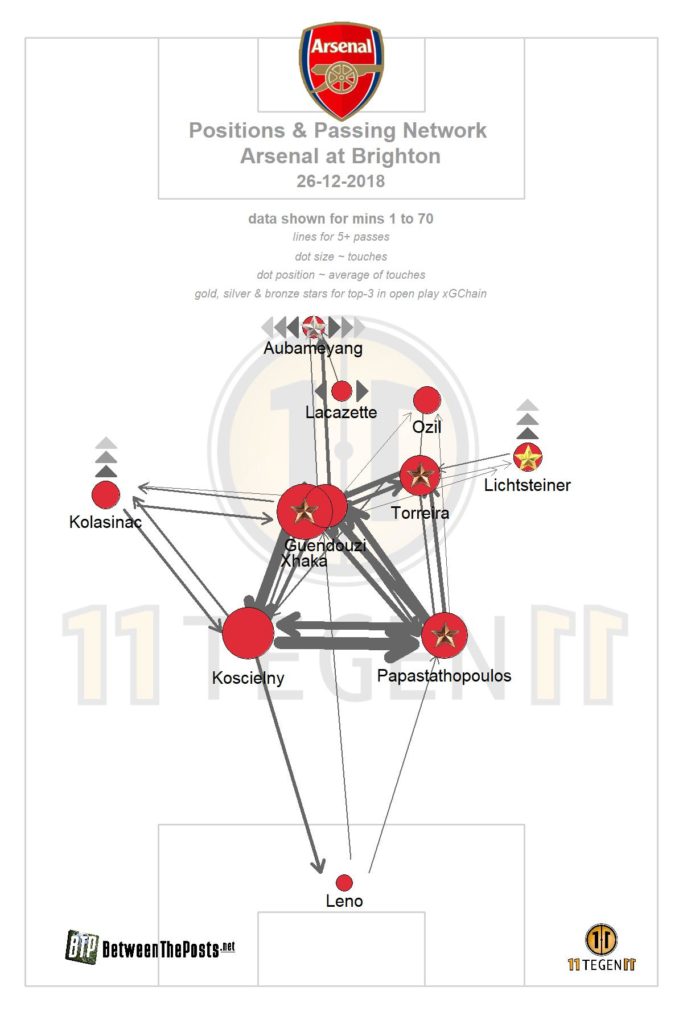 At half time, Emery took off Özil to bring on Alex Iwobi. The coach after the game claimed it to be for “tactical reasons”. Whatever those reasons were, they did not pay off one bit. The shape was still very similar, but now towards the left side, with Iwobi being the supposed focal point now. The key issue was that Arsenal continued to build their attacks from the right, which automatically created a disconnect between the defense and attack.

Lacazette and Iwobi were consistently dropping a bit deeper, in the channels of Brighton’s midfield. Arsenal failed to consistently play into them. And, to allude to an earlier point, Guendouzi – a right-footer, playing in from the right – could not just cut in and look to play diagonally across, meaning Arsenal’s play in possession was limited. The Frenchman was now being forced backwards on a lot of occasions. Even then, Arsenal did not really try to focalize their play to the left instead.

There was no out-ball, either. In the first half, Lichtsteiner was freed up because Özil dragged players out of position; in the second half, Kolašinac was too tightly marked because no players were opening the flank for him. With no out-ball or form of consistent progression, Brighton easily contained the Arsenal attack.

Emery made a couple of quickfire changes not long into the half, which saw Arsenal move to a back-three. Brighton’s conceding of pressure deep in their own half did well to nullify any potential gaps in their shape. Add to that Iwobi’s inability to combine in tight spaces with Ramsey, it saw Arsenal fail to create any real breakthroughs.

Hughton’s side certainly threatened more in the second half with those constant diagonals opening up spaces inside. Pröpper managed to get himself on the end of a couple of crosses, but none close enough to trouble Leno.

Not for the first time this season, Emery’s persistent defensive approach hindered Arsenal’s attack. The greater worry is that this is not even helping to steady the flow of goals Arsenal are leaking. With so many greater attackers at his disposal, it might be worth bedding them in the best way he can, so Arsenal can become a more cohesive unit all round.

A very solid result for Hughton’s Brighton sees them now ten points off the drop zone and sitting pretty in thirteenth. Even though their expected goal differences are quite poor, the results have been okay, and if Hughton can keep his team out of the relegation zone it is a job well done.

Use the arrows to scroll trough all available match plots.