Brighton and Hove Albion – Chelsea: Potter Punished On The Grounds He Once Built (4-1)

High tempo and routes through pressure were characteristics associated with Graham Potter’s Brighton and Hove Albion. Yet his Chelsea team were ill-equipped in stopping such qualities from shining, to reward Roberto De Zerbi with his first win as a Premier League coach.

The season of Brighton began in excellent form under Graham Potter’s supervision. Despite their start, it didn’t stop Potter from being attracted towards Chelsea: like your favourite indie band had just topped the charts by completely changing its style.

That being said, Potter came back to Brighton in a different position than he left it in. Roberto De Zerbi aims to mould his team more in his image – transfixed in quick one-touch combinations through the center to leave those watching in awe. However, he has embodied one Brighton value; winning the expected goals battles without the actual goals to show for it. Some impressive performances, but zero wins in his first five matches had to change.

Chelsea themselves had yet to truly impress under their new coach, although Potter’s reactivity was still in place. This was shown in their last match against Man United, as they rotated into a 4-3-1-2 shape to resolve their pressing issues. Whether they would stick to a passive high block against his old team would be an interesting call to make, which worked against Milan as their opponents couldn’t work any transitions, but United built overloads against an isolated Chelsea double pivot.

De Zerbi’s two changes, from the team that lost at Manchester City, saw Joel Veltman sidelined with a calf injury and Danny Welbeck removed from the side. Pervis Estupiñán and Kaoru Mitoma came back into the starting eleven.

Chelsea also made two changes to their side that beat Red Bull Salzburg in the Champions League. Jorginho and Pierre-Emerick Aubameyang were replaced by Ruben Loftus-Cheek and Mason Mount.

From the kick-off, this was a game with a lot of actions in a short space of time. Both teams attempted to press high, as well as manoeuvre around their opponents quickly. Nevertheless, Brighton rattled their opponents in the final third and constantly profited from the spaces which opened in the Chelsea backline. 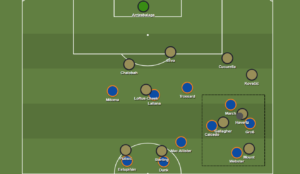 4th minute: Player positions in the buildup to the first goal. Effective counterpressure saw a four-versus-three overload being created down Chelsea’s left side. Mount’s attempted pass was deflected into Adam Lallana’s path.

A series of set-pieces and effective counterpressing on the channels pinned the pressure on Chelsea. Looseness from Silva suffered greater consequences, after constant collapsing on their right side broke up the Chelsea build and Silva’s opportunity to recover the situation saw his pass deflect off Trossard to Mitoma. Excellent work from the winger in transition gave the ball back to Trossard and with excellent composure, he rounded the goalkeeper to open the scoring.

The game did not slow down in tempo. Chelsea did find a forward inside of the fullback on a couple of occasions, but Brighton had kept their center very compact in their 4-2-3-1 shape, whilst being able to sporadically apply pressure without losing balance in the medium block. When the visitors were pinned under pressure, Brighton added to the scoring. An inswinging corner was flicked on at the back post, only for Ruben Loftus-Cheek to put the ball in his net.

Chelsea press but Brighton had routes

Two goals down after fifteen minutes, only then did we see how Potter approached the deep buildup from De Zerbi’s men. Chelsea pressed in a 3-1-4-2 formation, Mount and Havertz were responsible for pressing in the box, with Mateo Kovačić part of the second line of pressure and Ruben Loftus-Cheek positioned a lot closer to the center-backs.

This high block was man orientated to Brighton’s shape, with an emphasis on boxing of the double pivot – which had mixed results to start with but lost its authority as time progressed. In one phase, Silva followed Trossard’s run deep and Chelsea created a great chance on the transition. Raheem Sterling slotted Conor Gallagher through but Sánchez saved and Christian Pulisic put the rebound wide. 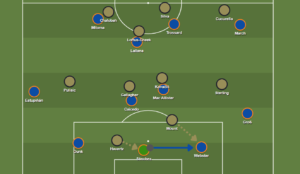 In the very next phase, Loftus-Cheek was caught between pressing Adam Lallana, who moved deep, or Estupiñán who overlapped. This caused Chelsea to lose both its shape and lateral coverage, as Kovačić was forced to cover space behind Loftus-Cheek and opened the pass to Alexis Mac Allister. He helped recycle the ball towards the right side and Trossard would put Solly March in space against Marc Cucurella.

The press from Chelsea was consistently aggressive, but ineffective as long as Brighton could have a spare man available, often Robert Sánchez between the posts. A long pass was accessible for the goalkeeper or Adam Webster and Brighton consistently got into positions where they were isolated with the backline, most notably March with Cucurella down the right side.

When the ball was higher, Brighton built progression in two different ways which involved their fullbacks. Pascal Groß moved inwards from the right, which resulted in Mount dropping deep if Brighton had Chelsea tilted towards its left side (as Loftus-Cheek occupied Lallana.) This helped De Zerbi’s team build quicker into the final third, whilst crashing the box with a lot more numbers.

The more aggressive runs came from Estupiñán, who could start his runs very early and lurk around Trevoh Chalobah, who also had Mitoma to deal with. These runs were particularly effective when Brighton had engaged in a combination: Caicedo was left free behind when the hosts had the ball against Chelsea’s backline. A pass backwards gave Caicedo the time and space to pick the next one, Pulisic was back to support Chalobah but let the runs of Estupiñán go without attention. 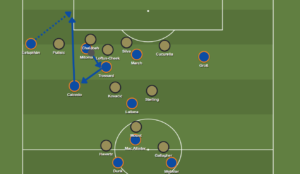 41st minute: Buildup to Brighton’s third goal. No pressure on Caicedo, as the ball was moved backwards, leaving a lot of space for the two Ecuadorians to combine – which was a consistent pattern in the first period. Pulisic left Estupiñán to run in behind and resulted in Chalobah putting the ball into his net.

The Ecuadorians were allowed to combine and deepen Chelsea’s woes. An excellent through pass down the left channel put Estupiñán behind and in the box. An attempted cutback to Mitoma was steered in by Chalobah, just before the first half was out of time.

Kepa Arrizabalaga was forced off due to injury, but this was not the only adaptation Potter had to make. Loftus-Cheek and Cucurella were now fullbacks, with Kovačić and Gallagher forming a double pivot in the midfield. This changed when Chelsea got the ball forward and Gallagher would make very aggressive runs down the right, a very similar role that saw him achieve great success at Crystal Palace. 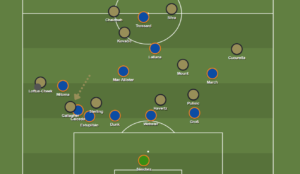 Chelsea’s 4-2-3-1/4-1-4-1 shape in the second half. Gallagher made similar runs from deep that he made at Crystal Palace upon entering the final third.

More effective possession was what Potter desired, so what better way than to start the second period with a goal? A Loftus-Cheek carry drew Brighton’s midfielders back and left space for Gallagher to cross the ball into the box. Havertz was free towards the back post to nod the ball in.

Chelsea’s 4-2-3-1/4-1-4-1 shape created a very expansive passing structure, which did nullify the Brighton attack from inflicting further damage but failed to establish one of their own. One notable detail was that Potter’s wingers constantly positioned themselves inside of the opposition fullbacks, without having a player on the outside that could cause further problems. As time continued, Mount dropped deeper and deeper to aid the progression, but the consistent hop-scotching of Chelsea midfielders meant they couldn’t establish routes between the lines enough.

Havertz was more accessible on the left, but Chelsea failed to truly cook enough pressure, even if the intensity of the game had dialled down by this point. Potter put on Aubameyang and Ben Chilwell with little effect, as the Chelsea offensive faded. This is reflected in the shot count: from the 45th to 70th minute, Chelsea outshot their opponents seven to three. They managed just two attempts after this point, as Brighton had seven attempts of their own towards the end.

In injury time, Brighton produced the icing on the cake. Chelsea’s transitioning should have opened even more Brighton chances but were truly punished when the defense failed to deal with two attempts from substitute Julio Enciso. Mendy parried the second chance, but Groß was in the golden position to make it four.

A very important victory for Brighton, one which keeps them within touching distance of European spots that can become available. The adaptability of the fullbacks helped make a distinct difference in all three-thirds of the field, a common feature when watching any of De Zerbi’s previous teams. With a highly flexible team at his disposal, it will be interesting to see how this side takes to such a high-risk but very entertaining approach.

It is worth pointing to this Brighton team that Potter spent multiple seasons building, to see such successes coming to Chelsea. They have always prided themselves on maintaining a level, despite a high rotation of coaches, but this is a team without the rearguard that stayed put for many seasons. Potter should get his time, but Chelsea needs its solutions. 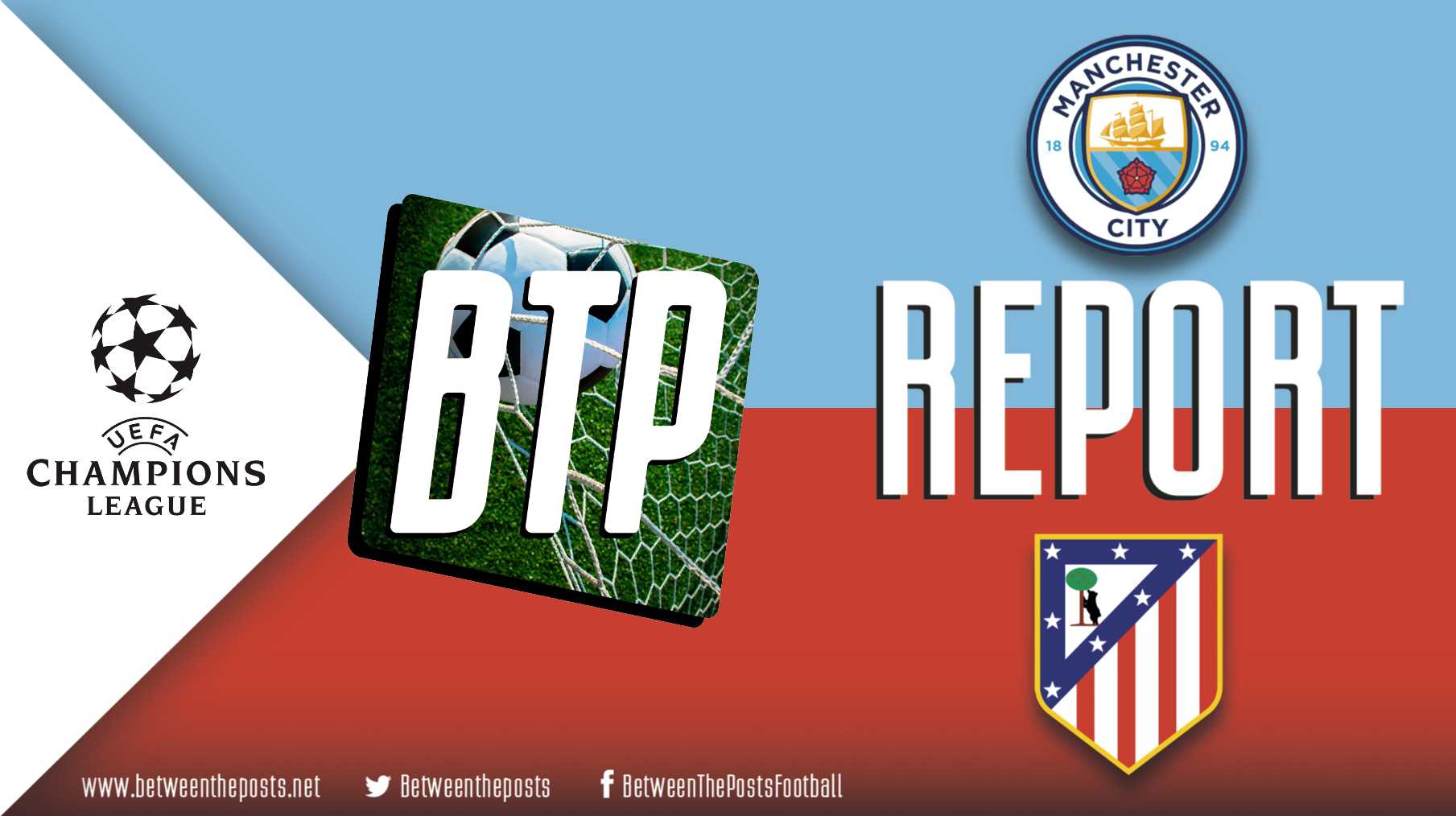