Liverpool struggled to find a consistent way of breaking down Brighton’s medium block, giving Chris Hughton’s side hope in the first half. However, a cheaply conceded penalty allowed Mohamed Salah to score the game’s only goal, leaving Brighton with an uphill battle against a defense that never really looked like conceding.

Liverpool struggled to find a consistent way of breaking down Brighton’s medium block, giving Chris Hughton’s side hope in the first half. However, a cheaply conceded penalty allowed Mohamed Salah to score the game’s only goal, leaving Brighton with an uphill battle against a defense that never really looked like conceding.

Liverpool travelled to Brighton off the back of losses to Manchester City in the league and Wolves in the FA Cup. Nevertheless, they were still top of the league, and thus had good reason to believe in their ability to bounce back.

In order to achieve a result, Jürgen Klopp returned to his favored 4-2-3-1 formation. Xherdan Shaqiri came back into the team after being benched in favor of James Milner at the Etihad. There was also an enforced change for Klopp, as Dejan Lovren’s injury against Wolves forced Fabinho to fill in at center-back alongside Virgil van Dijk.

Brighton came into the game on a four-match unbeaten run. Chris Hughton made one change from the side that drew away at West Ham in their last league game, as Gaëtan Bong replaced Bernardo in their 4-5-1 formation. 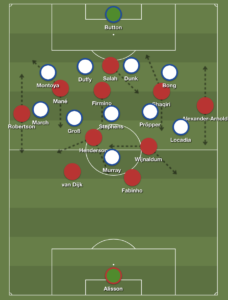 The pattern of the game – especially in the first half – became apparent fairly quickly. Brighton defended in a medium block A medium block refers to a team that retreats in their own half out of possession, generally only disrupting their opponents some way into their own half. and looked to counter, while Liverpool tried to find a way to break them down.

In possession, both Liverpool fullbacks pushed up aggressively and were responsible for providing width. Shaqiri and Sadio Mané then moved into the halfspaces If you divide the field in five vertical lanes, the halfspaces are the lanes that are not on the wing and not in the center. Because there is no touchline like on the wing, players have freedom to go everywhere. But this zone often is not as well-defended as the very center. This makes it a very valuable offensive zone to play in and a lot of chances are created by passes or dribbles from the halfspace. and either roamed behind Brighton’s midfield line or dropped deeper.

Meanwhile, Georginio Wijnaldum and Jordan Henderson usually stayed close to the center-backs to create diamond structures in possession. These were formed when one of Wijnaldum and Henderson dropped to create a back three, while the remaining central midfielder stayed up top.

Despite the aforementioned buildup structure, Liverpool struggled to progress the ball into the feet of their attacking players. Brighton’s 4-5-1 medium block was well organized and left few spaces for Liverpool to find passes between the lines.

Occasionally, Brighton would add to their defensive scheme by pressuring the ball. This occurred when Pascal Groß pushed out and pressed from right central midfield, or when Jürgen Locadia made diagonal runs to force Fabinho to turn inside.

Liverpool rely on their defense for offense

However, in most instances, Liverpool’s center-backs were able to work in time and space. Since their team struggled to get between the lines, it often fell to them to look for long passes over the top of Brighton’s back line. These were usually headed away by Brighton’s defense, before Liverpool’s forwards filled the space in front of the defensive line and tried to win second balls.

In addition to using their center-backs to create offense, Liverpool also utilized their fullbacks as an outlet to switch play A pass from one side to the other.. This was a prudent move, as Brighton’s fullbacks were being pulled inside due to the narrow positioning of Liverpool’s wingers. Consequently, Liverpool’s only decent first half chances came from crosses from the fullbacks, with Liverpool’s front four providing good box presence in those situations. 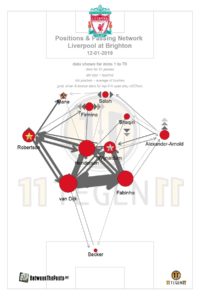 Robertson’s gold star shows that he was the most involved in quality Liverpool attacks.

Early on in the game, Andrew Robertson’s cross was met by Roberto Firmino, who was unable to get enough contact on the ball as he stretched and tried to divert it towards goal. Their second chance, later in the half, came from Trent Alexander-Arnold on the right-wing. His cross was headed just wide by Shaqiri, who found himself unmarked near the front post.

Brighton attack in a direct fashion

Brighton were typically quite direct. This was probably for the best, as they ended up playing themselves into Liverpool pressing traps A pressing trap is a predefined plan to leave a particular player or zone open, to invite a specific pass. Upon a pass to that player or into that zone, a rapid coordinated team press on that player or zone is exerted. when they attempted to employ a short passing style. In contrast, they always looked more assured going for the direct option, although they were never especially threatening.

Locadia versus Alexander-Arnold on Brighton’s left was a physical mismatch and offered a way for Brighton to gain space. When they could get the ball into the final third The one-third of the pitch that is closest to the opposition’s goal. , their main route of attack was crossing, especially from the likes of Groß from deep areas. He often looked to find Murray and Locadia at the back post. 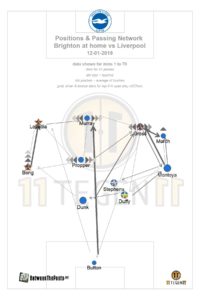 The thick line from Button to Murray show’s Brighton’s preference for route one football. The bronze stars for Locadia and Groß show their sizable attacking involvement relative to their other teammates.

That offensive strategy was not particularly inspiring, but it was enough to make the fans hopeful for some kind of result. Unfortunately for them, all their team’s good work was undone early in the second half.

As soon as Salah received the ball in the penalty box, Brighton somehow appeared nervous – perhaps aware of Salah’s elusive dribbling. Sure enough, Salah managed to create a shooting angle, at which point he was brought down. He converted the resulting penalty, putting Liverpool 1-0 up.

The game was always going to be a massive uphill struggle for Brighton once they went behind. They are a team that would rather sit back and counter instead of having to chase a game. Liverpool also like to counterattack, and the lead gave them a chance to sit off and threaten in transition when they wanted to.

Liverpool held onto their lead without much trouble and could have even won by two goals if Salah had managed to convert a sitter in the final minutes. This comfortable win side puts pressure on Manchester City to keep pace when they host tricky Wolves on Monday night.

Brighton were organized defensively – as expected – and competed well for most of the game. However, they struggled to pose a serious attacking threat and didn’t manage a single shot on target. Nevertheless, they should still have enough quality to comfortably avoid relegation, especially given their strong home record. 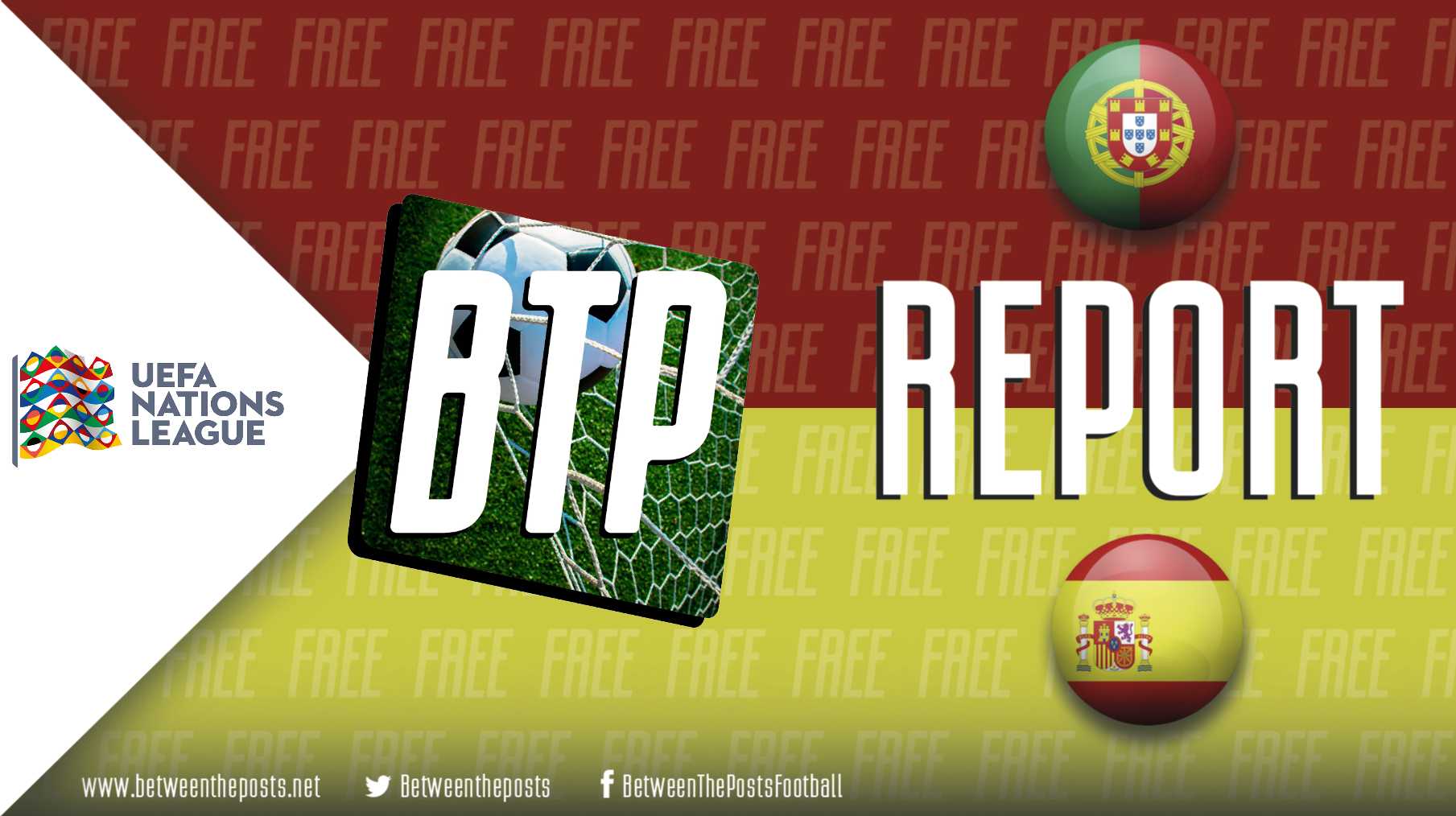